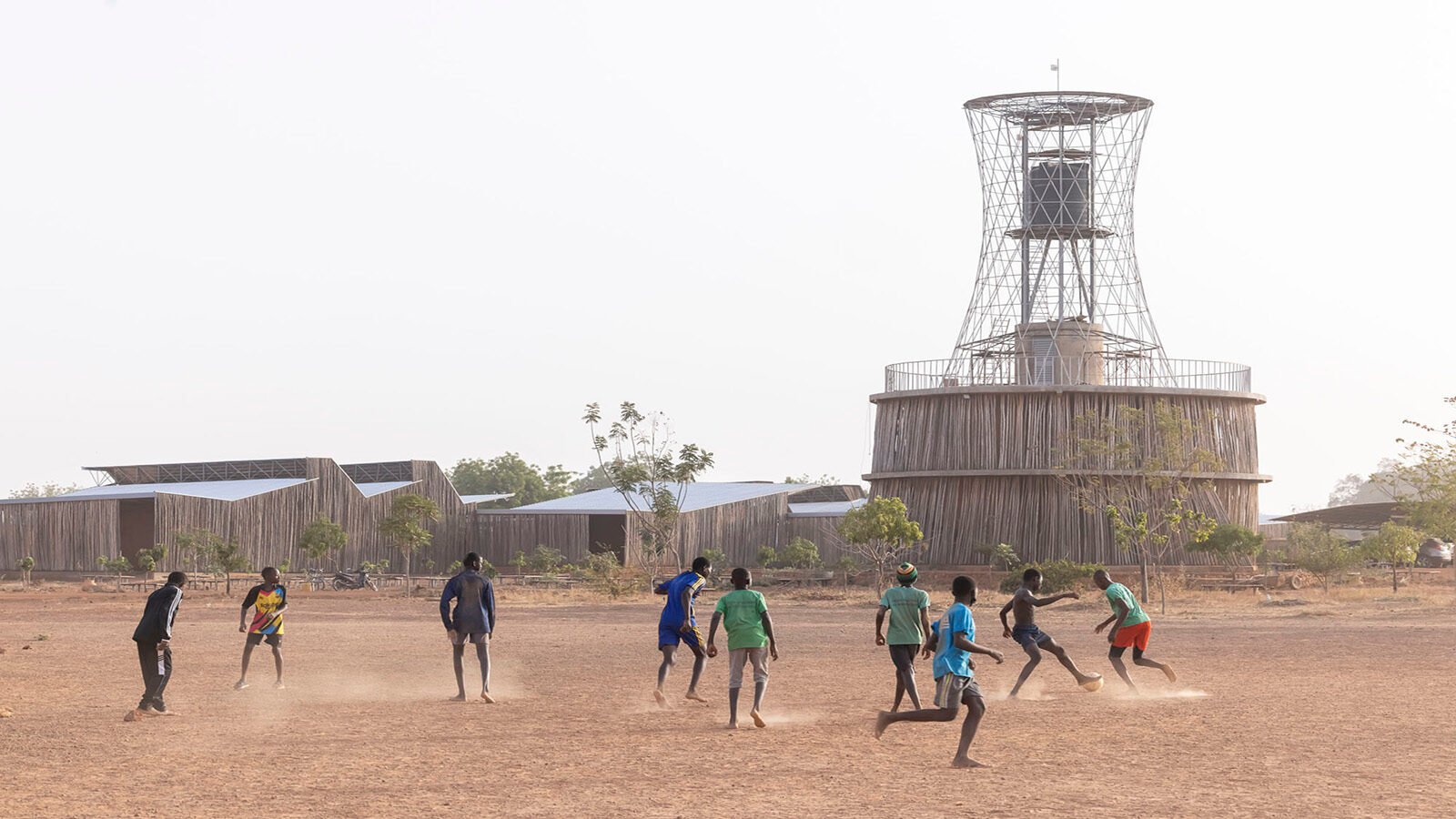 Kéré Architecture Builds Upon the Educational Ecosystem of Burkina Faso

With the Burkina Institute of Technology, the firm also explores new ways to use vernacular materials to spectacular effect.

“Let the structure grow.” This was the unique brief for a West African university, the Burkina Institute of Technology. Rising from a barren desert landscape in a region with limited access to higher education, the 2,100-square-metre school entices prospective students with its compelling and expandable architecture.

“The kids started coming by as soon as we began to build,” remembers Diébédo Francis Kéré, founder of Berlin-based Kéré Architecture and the mind behind the university’s design. “First to watch, and then with, ‘Wow, something new is happening here and we want to attend.’” The school offers programs in computer science and electrical and mechanical engineering; together with Lycée Schorge — an elliptical high school Kéré also designed, completed in 2016 — it establishes a steadily expanding campus on the edge of Koudougou, Burkina Faso’s third most populous city.

Empowering a community rich in youth yet poor in infrastructure, both the university and the high school (initiatives of the Stern Stewart Institute, a German think tank) are critical. The median age in Burkina Faso is 17.6, while on the continent it’s 19. The hope is that each year, as the university’s capacity swells, more high school graduates in Africa are able to continue their education. 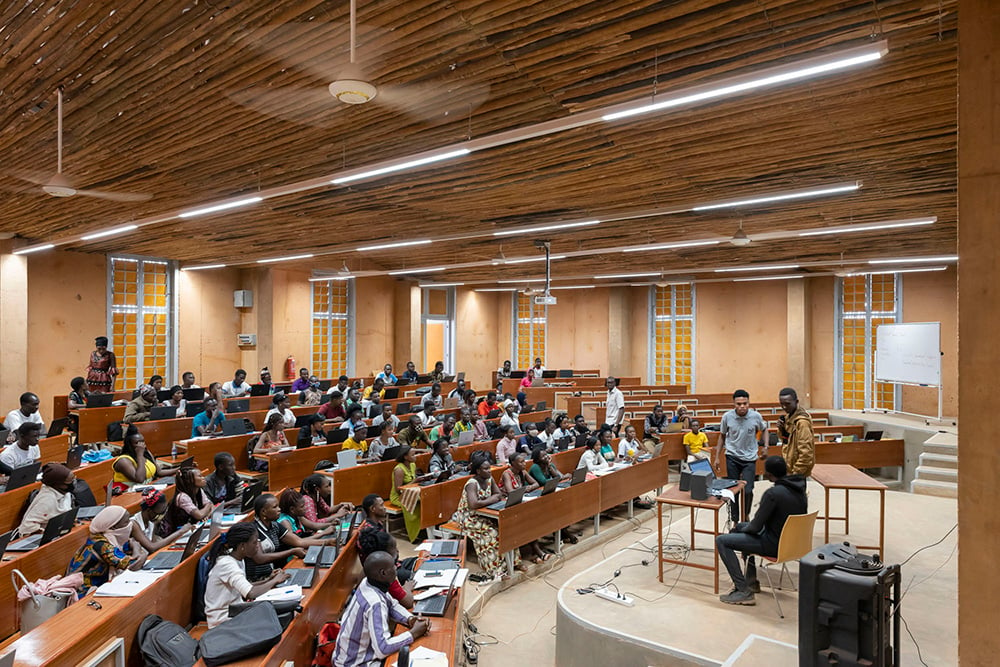 Meeting this overarching social objective was no easy feat. The first of many obstacles was the land itself; located on a desert floodplain, it is parched to the point of no vegetation and further subjected to destructive seasonal storms. “The client was only able to complete the purchase because the site had no agricultural value, and it was thought that if you built on it, water would eventually carry everything away,” Kéré says. Then there was the heat. From March through May, the average temperature in Koudougou lingers at a scorching 37 degrees Celsius.

“This is the first building made this way in Burkina Faso, if not in the entire region”
Francis Kéré

The desire to temper this ferocious sun drove the architecture of the repeating (and easily replicable) rectangular elements. These modules make up the institution’s multiple connected buildings — including five 54-square-metre classrooms (plus one outdoor classroom) and two auditoriums accommodating 100 and 200 students respectively — and will also be used to create future facilities. “The structures are orthogonally aligned to zigzag, to always create a courtyard,” Kéré explains. This space serves as a cool, partially shaded hangout to which the air naturally flows. Meanwhile, the buildings’ dramatically tiered roofing modules, made of galvanized steel, function as chimneys that expel warm air and channel rainwater while welcoming in the light. 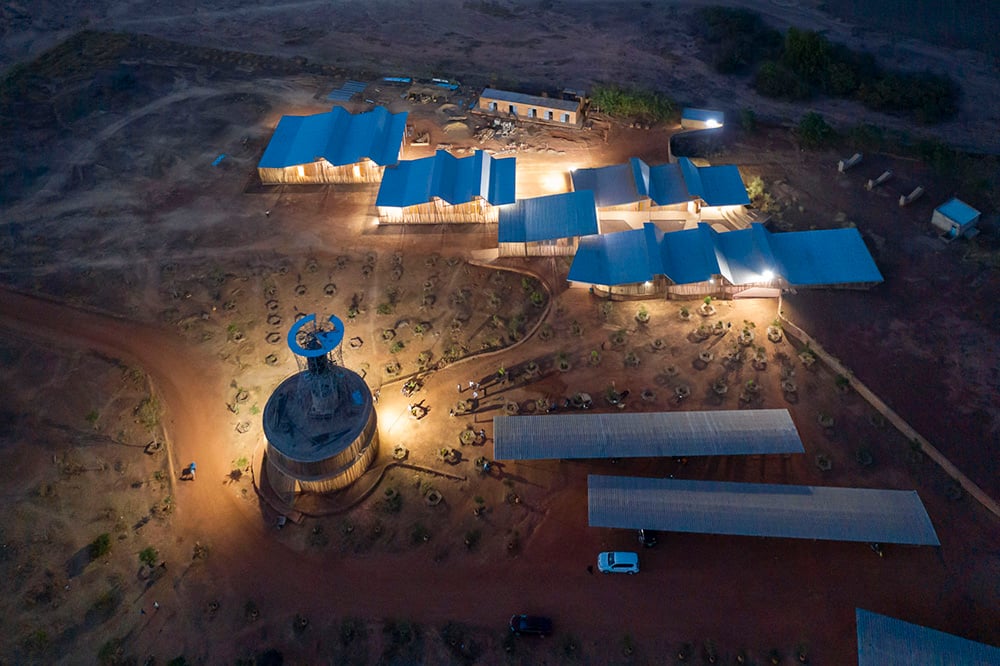 Part of an evolving landscape that will become home to more buildings as new educational programs are added, the Institute is powered by a solar panel installation.

The structural walls also provide natural cooling through their very thickness — 35 centimetres — and a material mix of cement and local clay, a carefully honed recipe. “This is the first building made this way in Burkina Faso, if not in the entire region,” Kéré explains. “We poured clay like you would concrete.” The architect devised a two-by-two-metre mock-up “to really study the cracks” before achieving the resulting buttery surface.

Completed within a tight three-year time frame, the project required less machinery than rammed earth construction. Plus, it made use of local know-how and resourcefulness. The team employed residents of the area to fabricate the walls, then repurposed the board forms to construct both the lamella shutter systems for the massive windows and the custom benches found throughout the school. 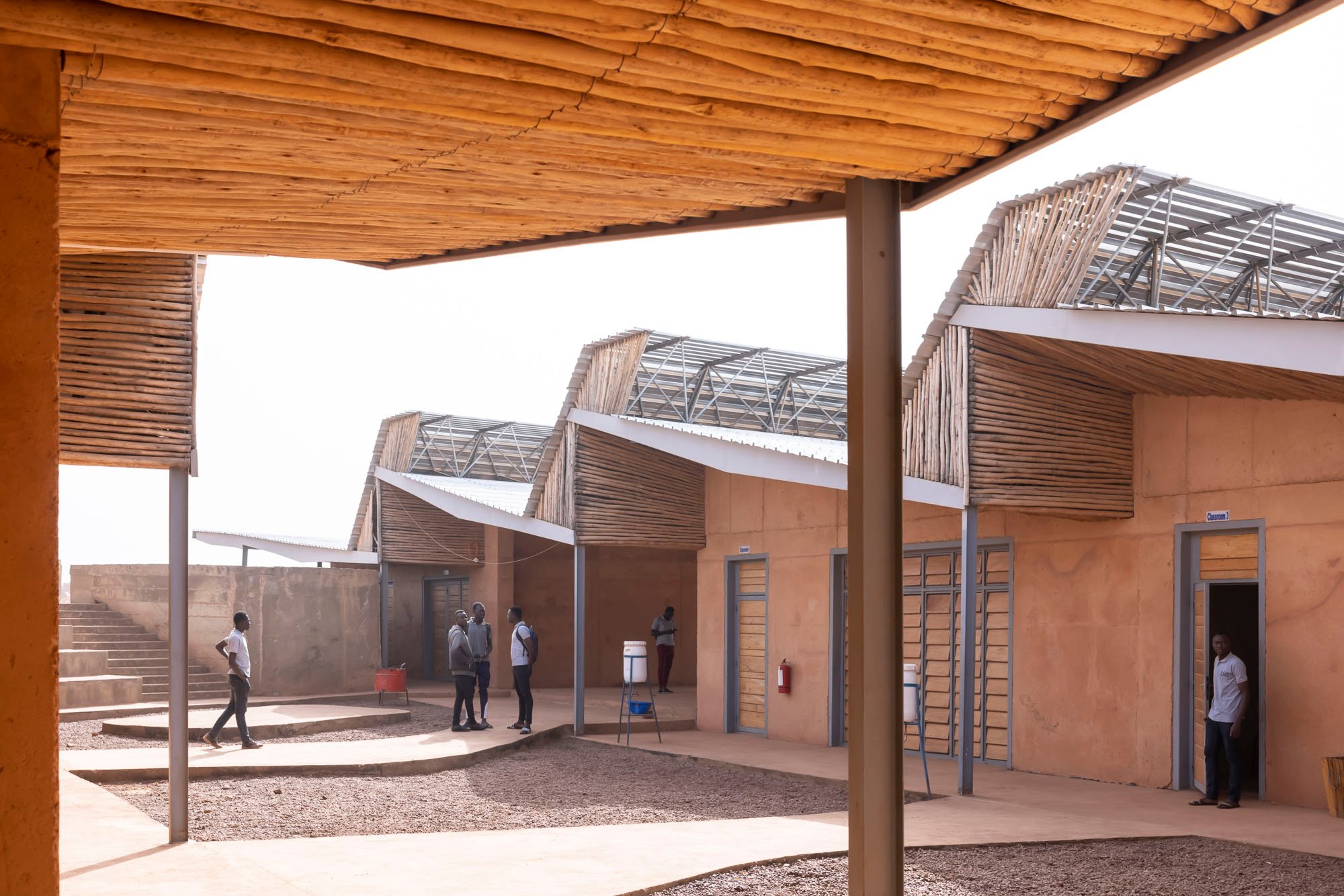 The modular structures, with chimneylike roofs that allow air to circulate, are arranged to form a central courtyard.

At the same time, an entire supply and production system was built from the ground up to process the eucalyptus that shades the pathways around the buildings and lines the classrooms’ suspended ceilings. “We wanted to generate a business and income for the community using a readily available material,” Kéré adds. After the fast-growing trees were harvested from inner Koudougou, local women were employed to do the labour-intensive job of removing the bark, sanding the slender stalks and then infusing them with oil to impede decay.

Bundled to form sunshades, the rustic sticks don’t just enshroud — they also create a poetic interplay of shadow and light on the ochre walkways throughout the day, adding a sense of dynamism to the passage of time. The natural material also imbues the project with a low-tech, highly tactile character that connects it aesthetically to the nearby high school, a vernacular brick structure similarly curtained in the hardwood. 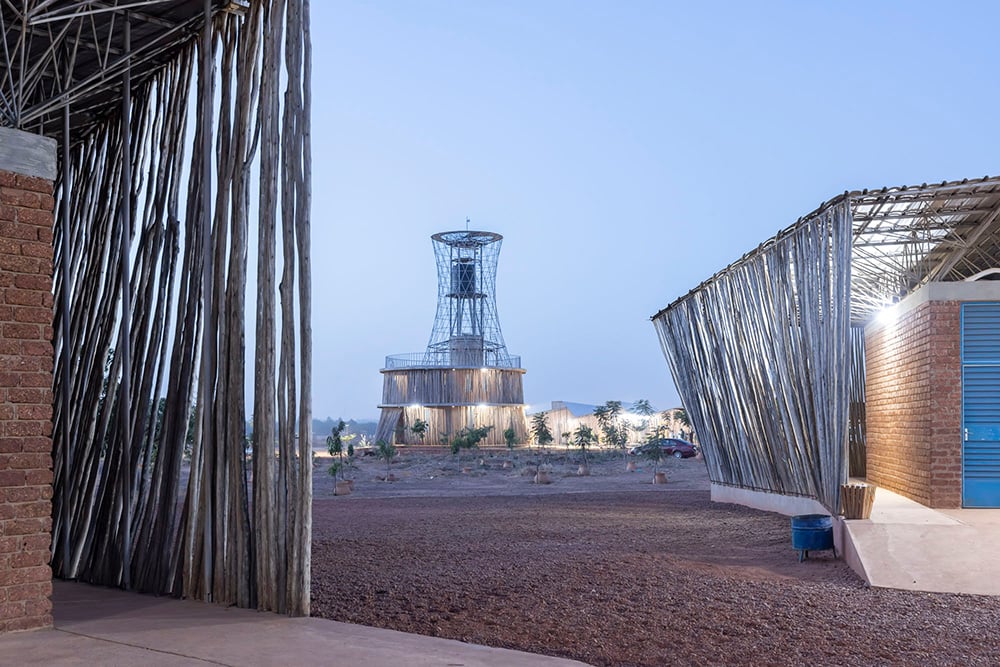 A powerhouse and admin tower anchors the institute, whose low-slung modular buildings are curtained in eucalyptus.

Beyond the architecture, Kéré’s team was also given the daunting task of devising all the other complex systems for the ever-growing campus. They installed a trio of solar panel arrays that feed a powerhouse and admin building — a heroic circular tower — and generate electricity to run both the institute’s IT equipment and the air conditioning it necessitates.

In response to the COVID-19 pandemic, they built a healthcare facility. After five attempts, they even dug a deep well for drinking water. And they installed large underground tanks with a combined 986,000-litre capacity to collect water during the rainy season. This system supplies irrigation for a vegetable garden and 1,100 trees (among them mango, kapok, banana, papaya and baobab), which constitute a landscape so rich and varied it helps prevent flooding.

“When we started planting, the locals were laughing. They said, ‘You can’t plant trees there!’” Kéré recalls. Yet the trees — like the campus, which will soon expand with another 130-square-metre auditorium — continue to flourish. “Now they think I am a magician.” Or a man capable of bringing an oasis, and a much-needed educational ecosystem, to a desert. 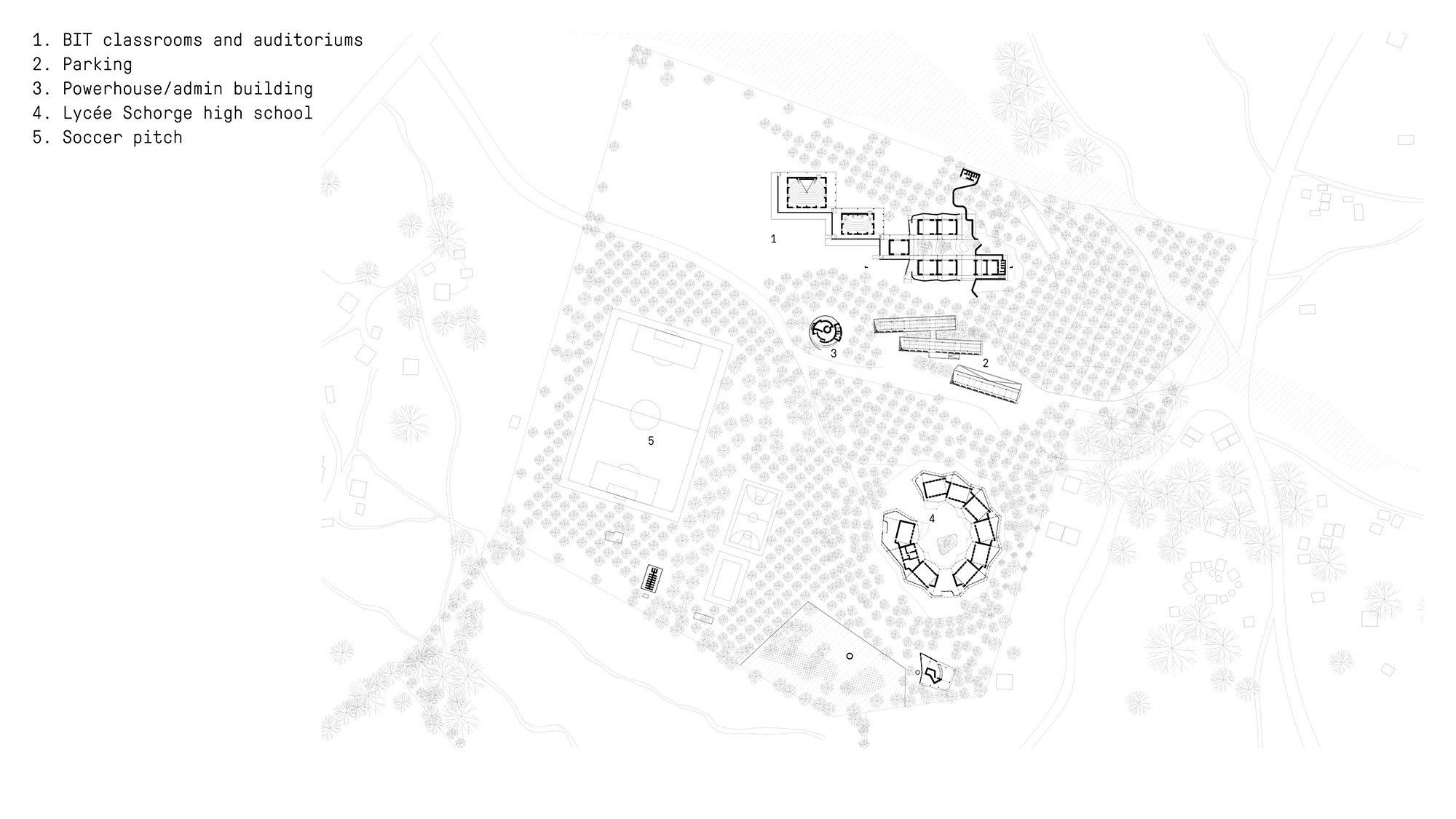 With the Burkina Institute of Technology, the firm also explores new ways to use vernacular materials to spectacular effect.