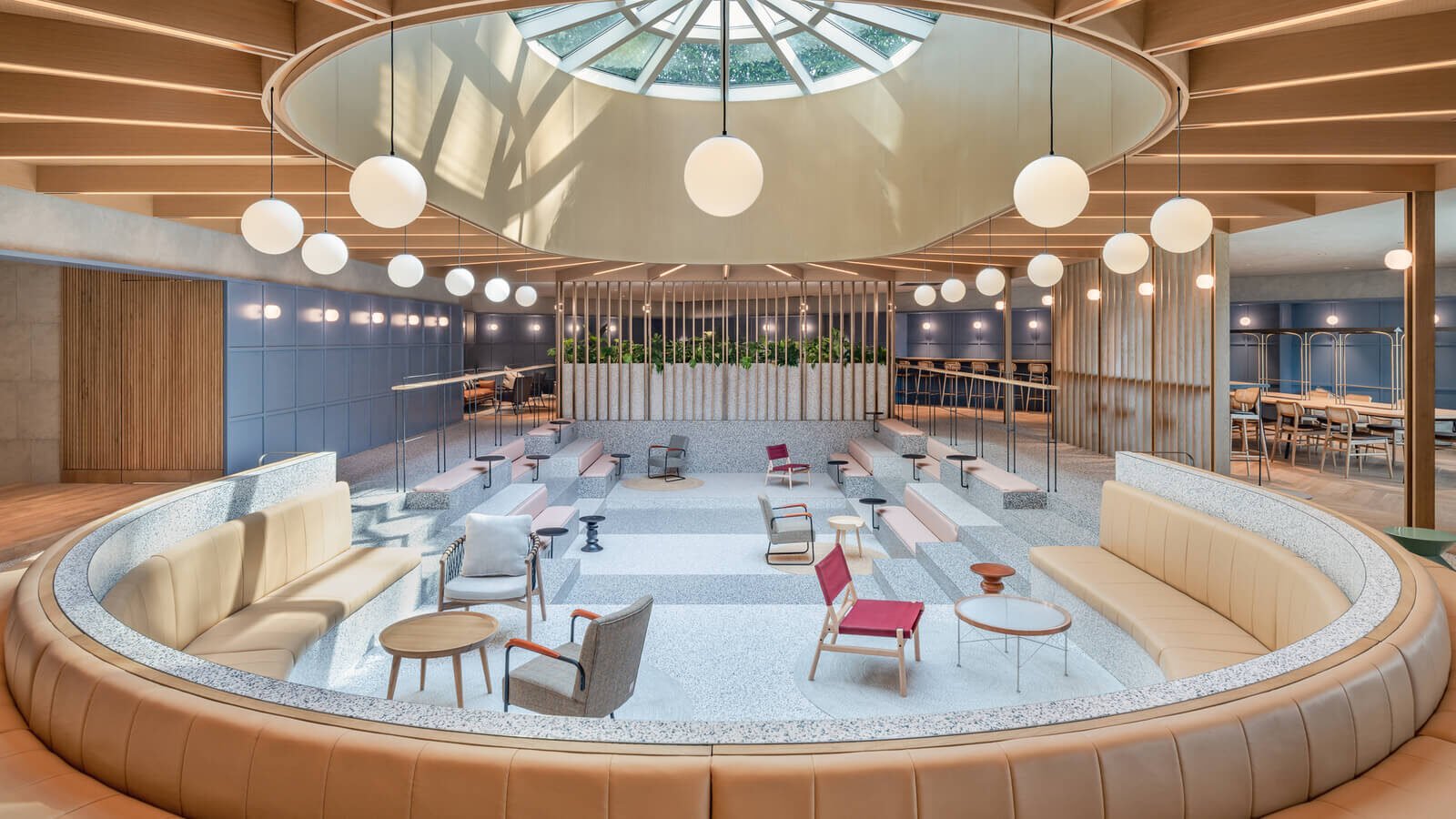 Once a Public Swimming Pool, Now a Communal Office Hangout

In Shanghai, Linehouse converts a neglected recreation hub into a vibrant multi-use space.

Upon entering the third-floor swimming pool of the Kerry Centre in Shanghai’s historic Jing’an district last year, Alex Mok, cofounder of Linehouse, instantly knew what needed to be done. A shared amenity in the commercial complex, the 680-square-metre space was notable primarily for its defects. Dark and lifeless, it was certainly not — as it was meant to be — bustling with swimmers.

Asked to transform the facility into a multi-functional space for office tenants, Mok and her team sought to reinstate its vitality, inspired by its commanding oval skylight. “We knew that everything had to be centred around that,” Mok says. “So we envisioned this radiating structure that came from the skylight itself; that’s how we conceived the idea of a hearth.” By linking the commercial scheme to the domestic realm — specifically, the idea of the mantel, where people have long gathered to stay warm, bond and exchange ideas — the renovation would fulfill Kerry Centre’s wish for an enticing communal spot. 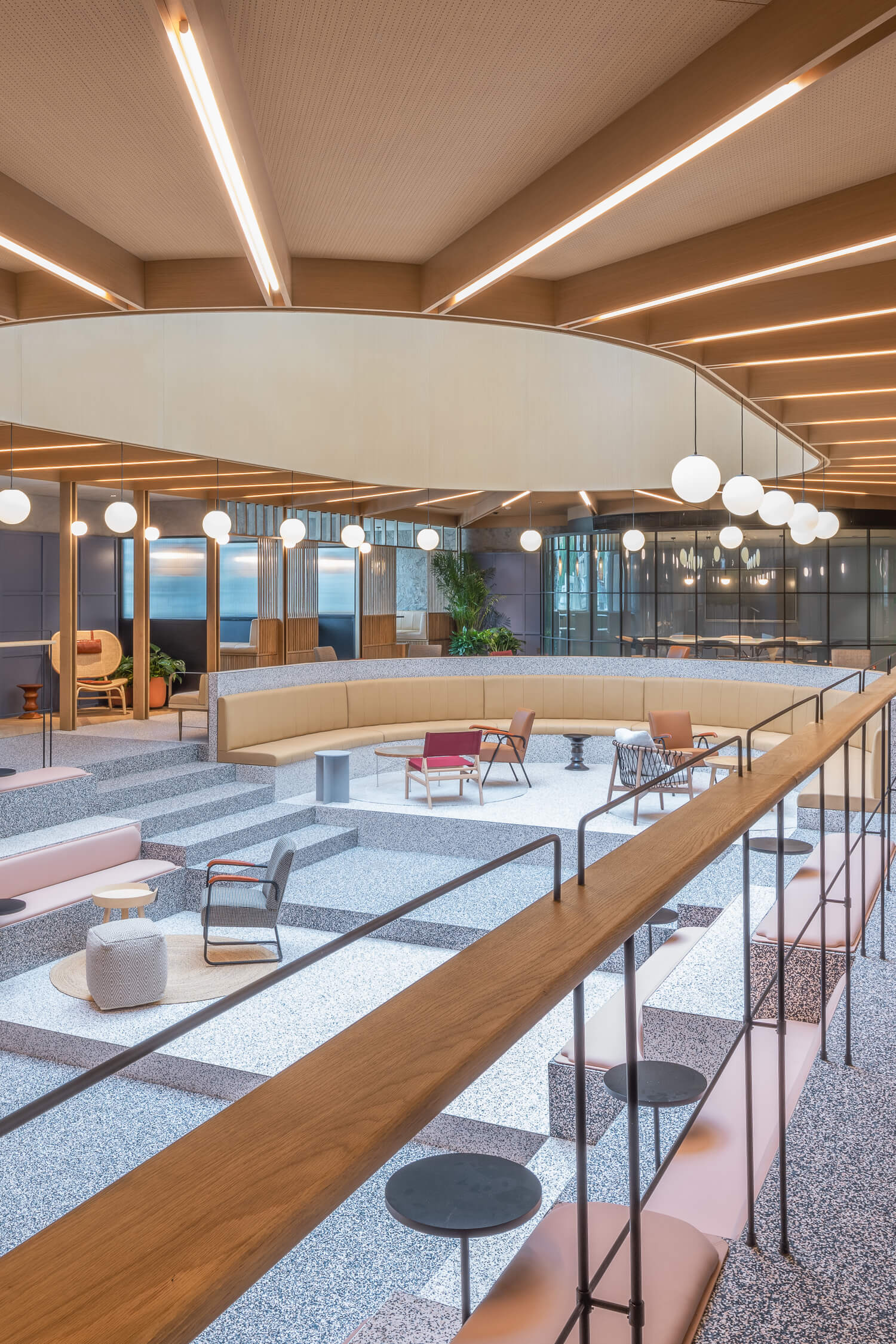 Along with a variety of seating options within the converted swimming pool, Shanghai-based studio Linehouse ringed the former deck with separate meeting rooms, private pods and a pantry.

The updated skylight illuminates the open town-hall heart, accentuated by oak fins fitted with customized tube lights that radiate from its centre. The pool itself is now a sunken amphitheatre, circumscribed by a double-sided banquette at the far side and a high bar leaner in the middle, which echoes the elliptical curvature above. On one end, the panelling extends into vertical screens that separate functional nooks and quiet workrooms. 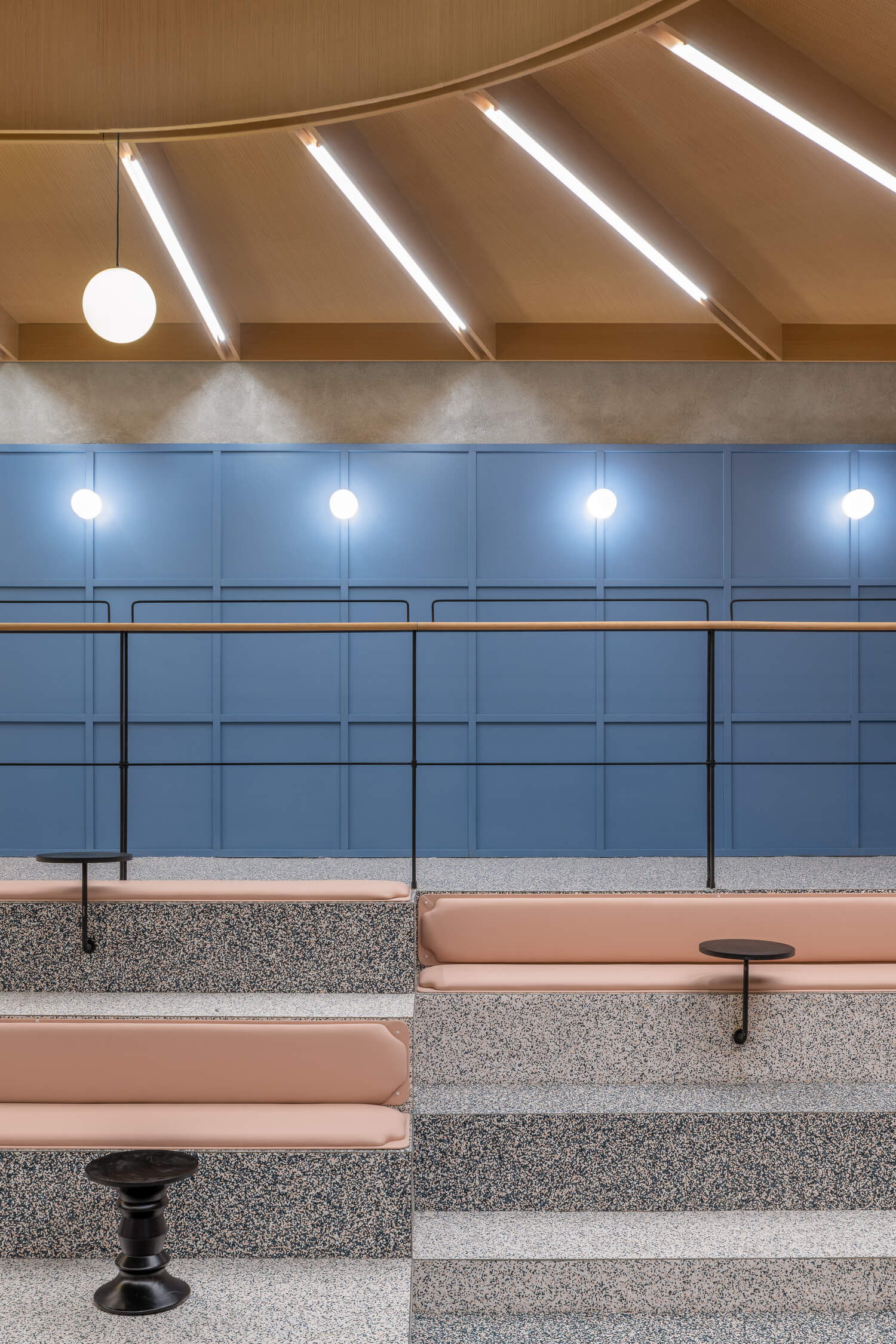 Rather than opting for (overused) terrazzo, the designers applied a speckled vinyl by Tarkett. 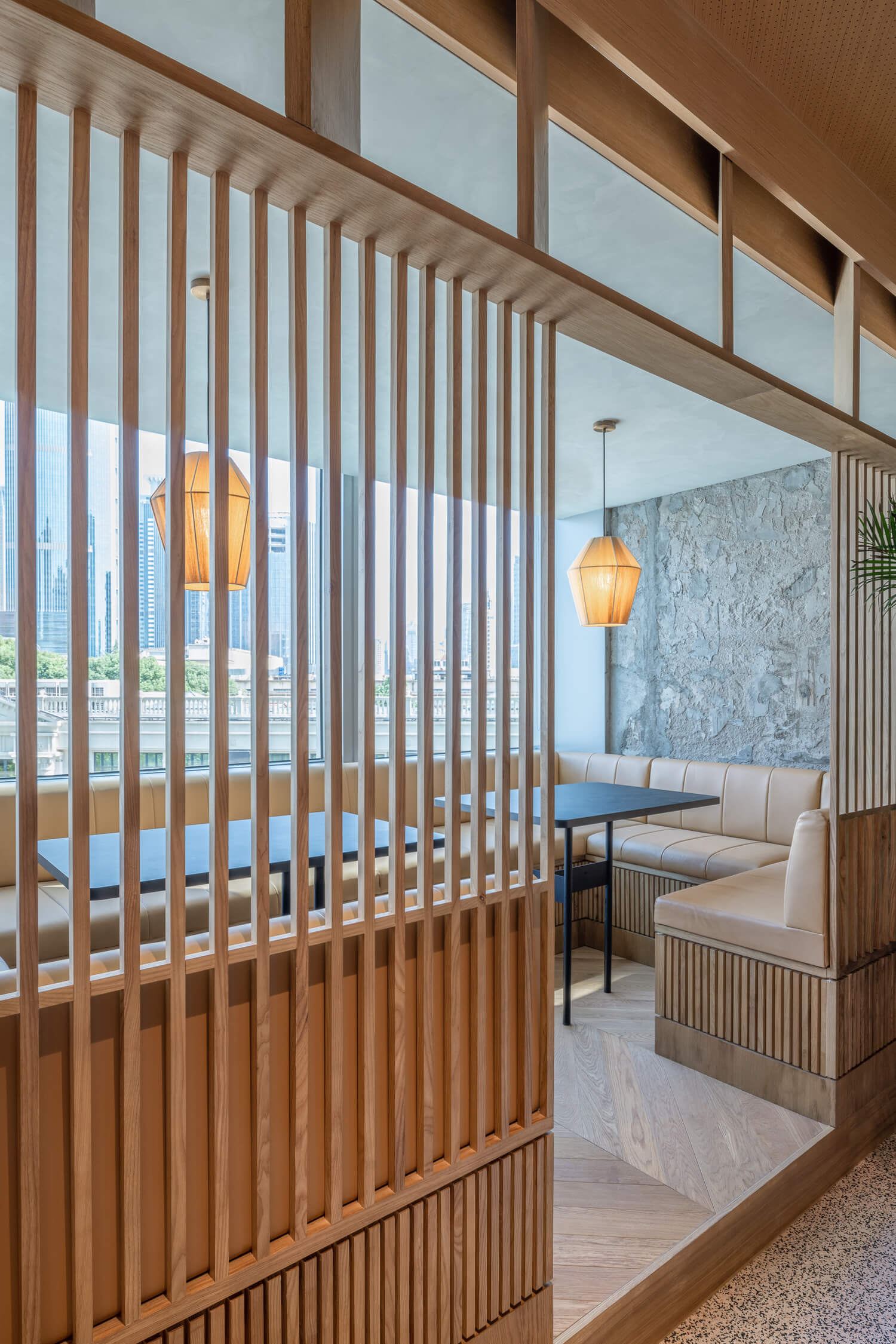 Sections of the original concrete wall were retained, injecting areas like this nook with a pleasing tactile quality.

Opposite, it meets bare concrete, an artifact of the pool’s shell that Mok retained to give “tension between the rougher, old elements and the new finishes,” like the blue lacquered wainscotting. Disenchanted with the industry’s overreliance on terrazzo, Mok lined the steps and seating with Tarkett’s speckled vinyl flooring instead. “It’s softer, with really good acoustics,” she explains, and it complements the beige and pink leather seating and the earthy Calico wallpaper in the private phone booths nearby. 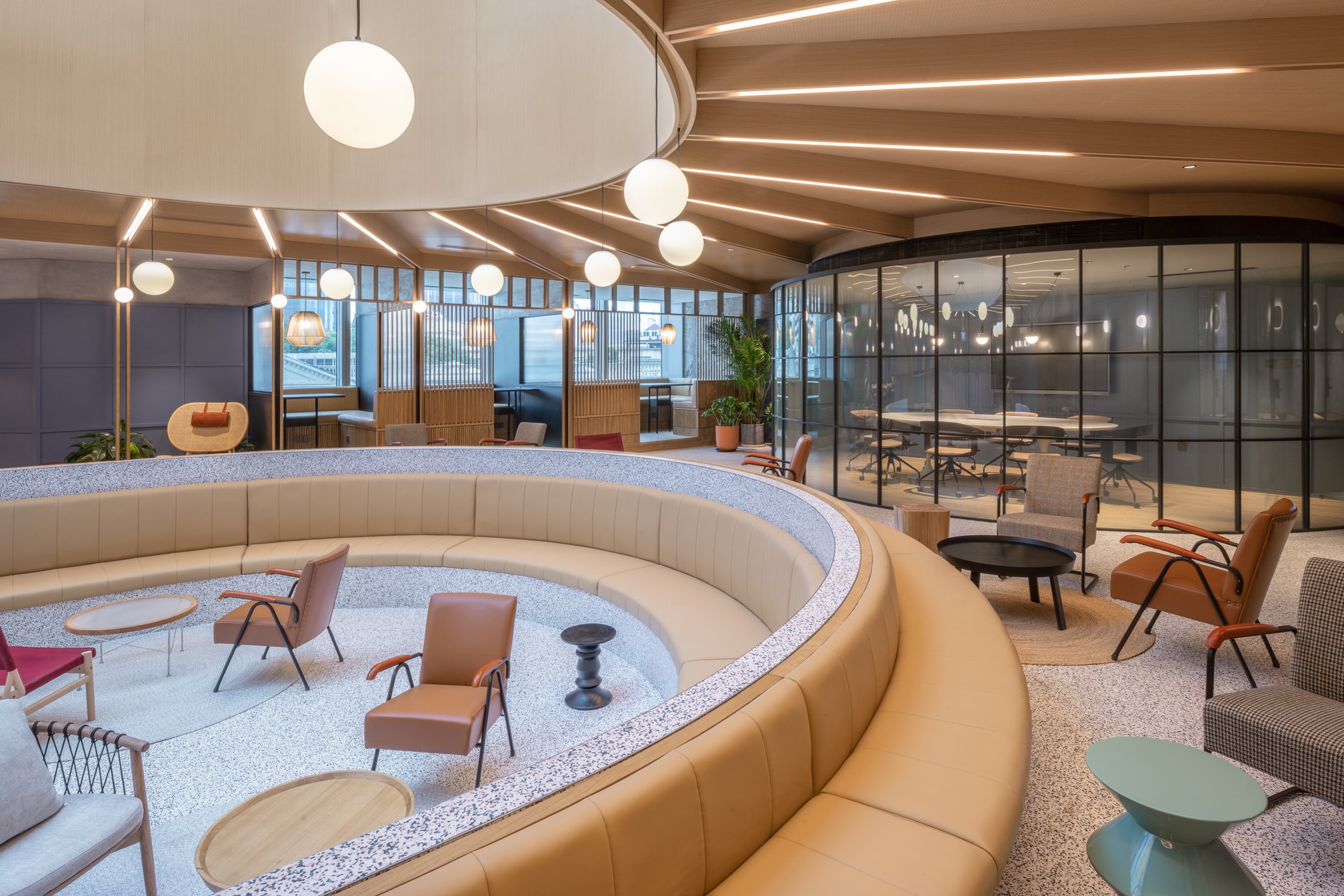 An array of seating gives the interior an eclectic, relaxed feel.

Although Mok set out to provide an area for workers to escape their staid offices and inspire creativity, even she is surprised by the variety of events that have already occupied what is now referred to as the “social space.” From one-off dance classes to yoga sessions, each new assembly challenges preconceived notions of what a workplace should be. It’s also a subtle reminder that the hearth, while providing warmth to its admirers, is only as vital as those who congregate around it.

In Shanghai, Linehouse converts a neglected recreation hub into a vibrant multi-use space.