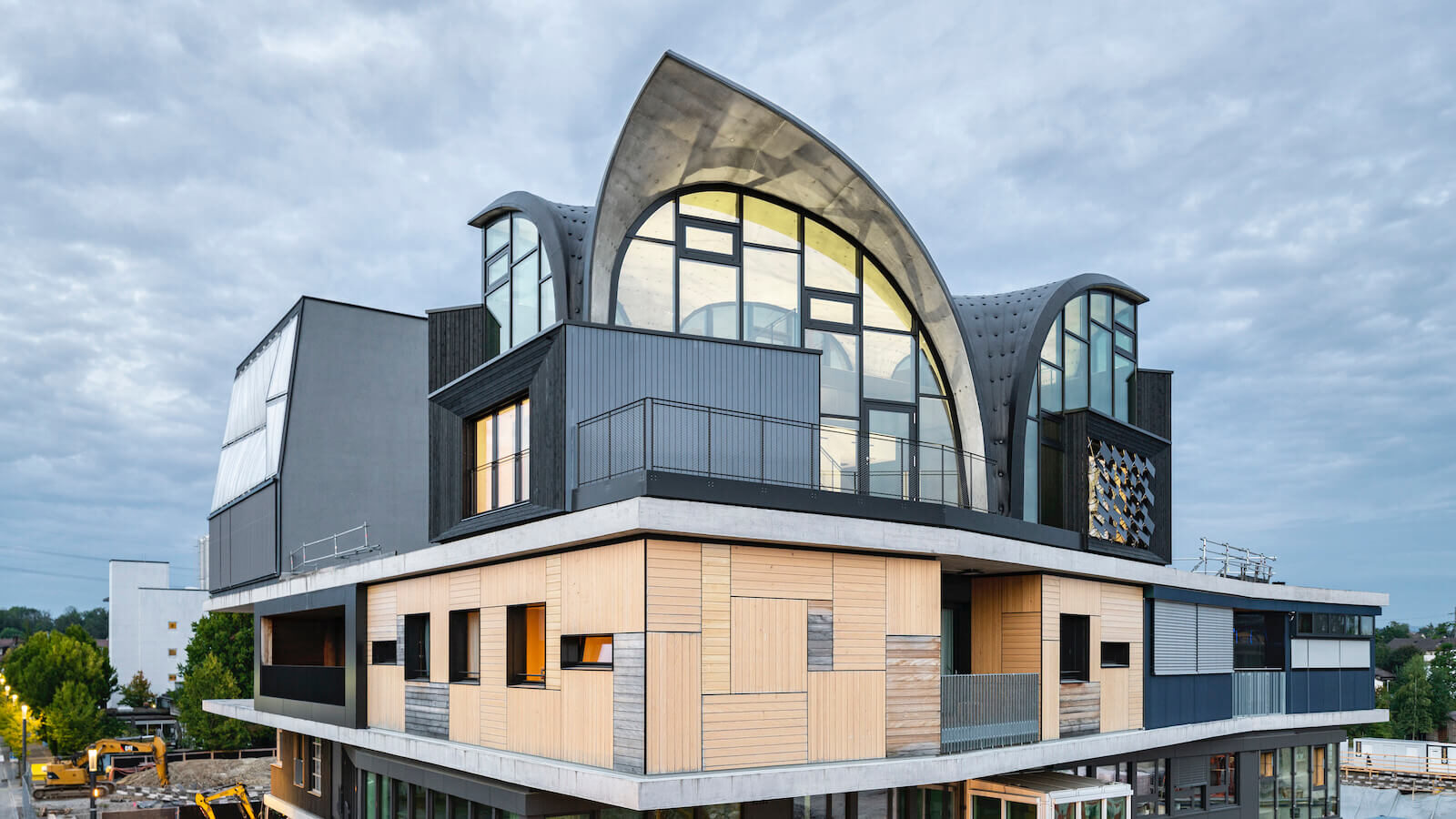 Future of Concrete: NEST HiLo is Completed in Switzerland

HiLo stands for “high performance – low emissions.” It’s a humble moniker for a decidedly ambitious building that stretches the limits of experimental concrete construction. The Swiss project is part of NEST, a facility on the Zürich campus shared by research institutions Empa and Eawagin Duebendorf that seeks to gather state-of-the-art technologies for energy-efficient architecture all in one place. The idea is to test out these novel approaches in “real-world” conditions. 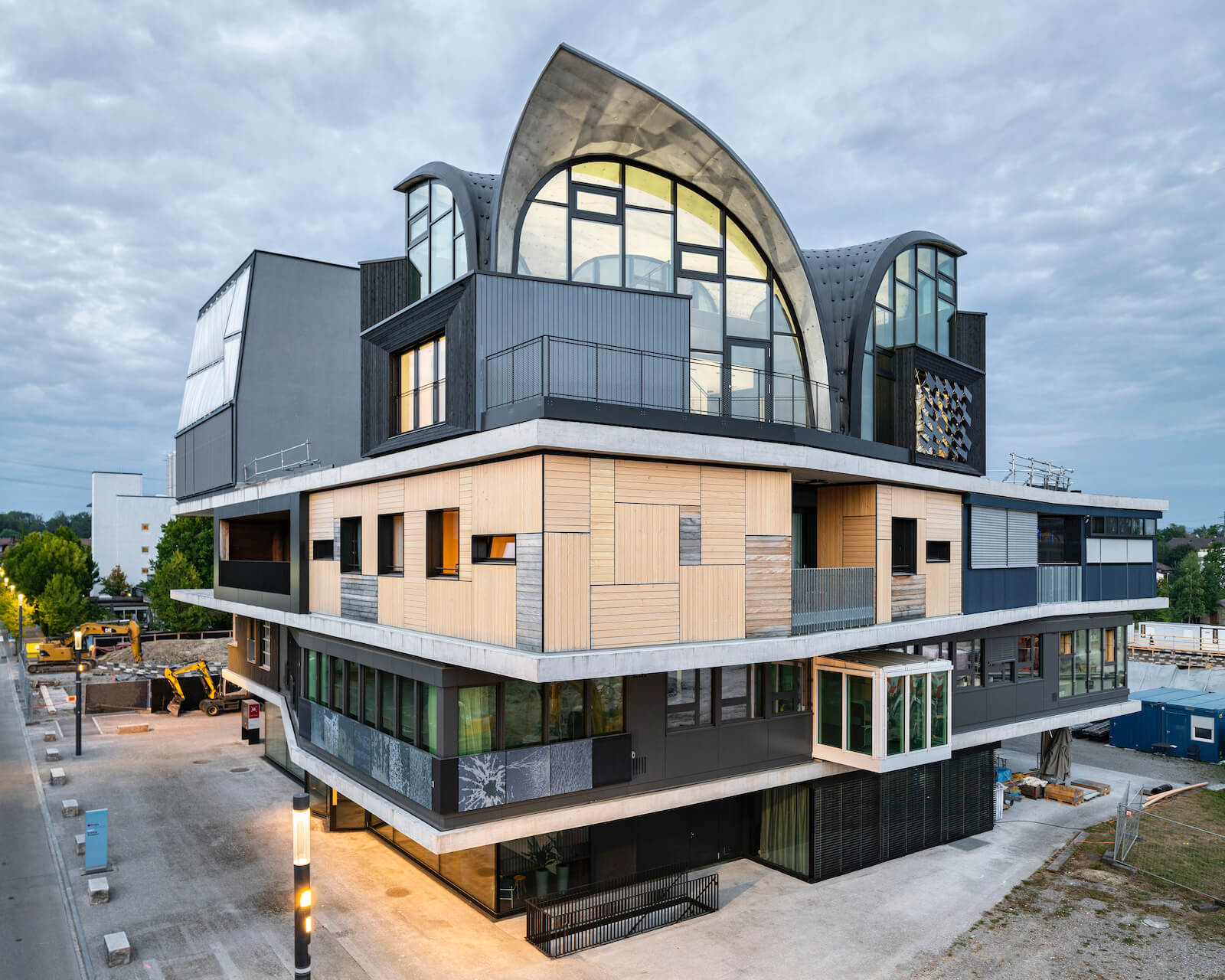 Developed by ETH Zürich, under the guidance of the professors Philippe Block and Arno Schlueter, HiLo first came to the attention of architecture diehards with a video showing its creation, which involved spraying a lightweight reusable formwork – a tensioned cable net – with layers of cement. Azure covered it as part of a growing trend of experiments in eco-friendly concrete. 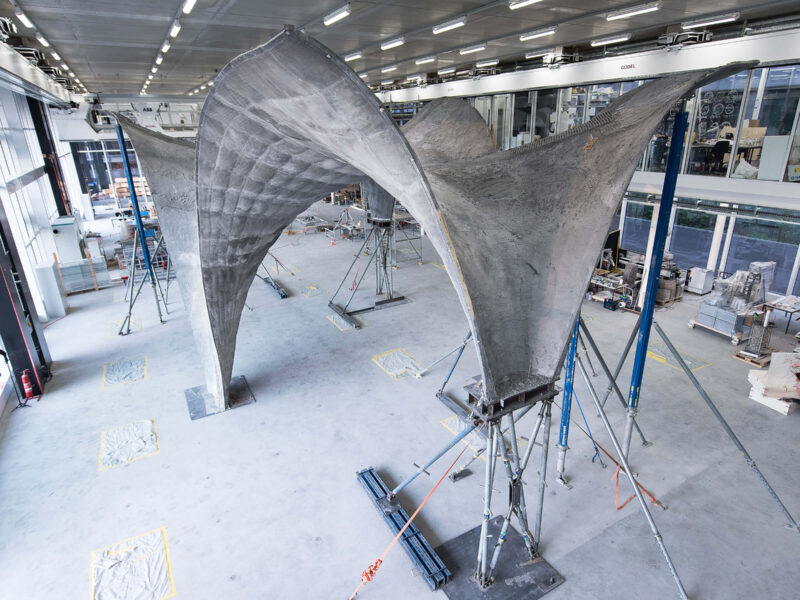 Concrete is Becoming Smarter, More Sustainable and Beautiful
One of the world’s most polluting building materials is undergoing a seismic revolution, becoming a leaner, lighter and smarter version of itself.
Read More 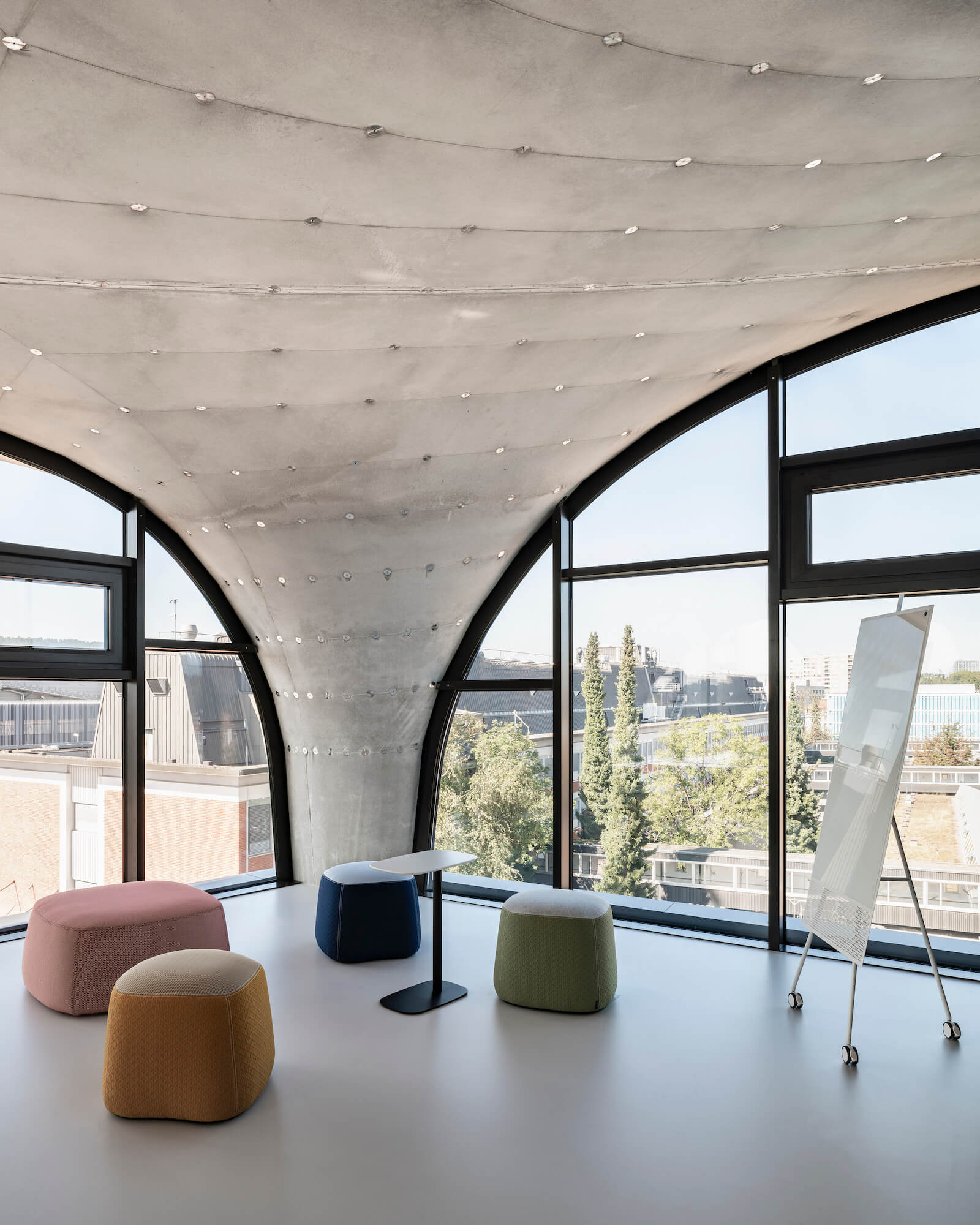 The concrete roof touches down to connect with the building’s various levels and to allow for a dynamic approach to glazing. 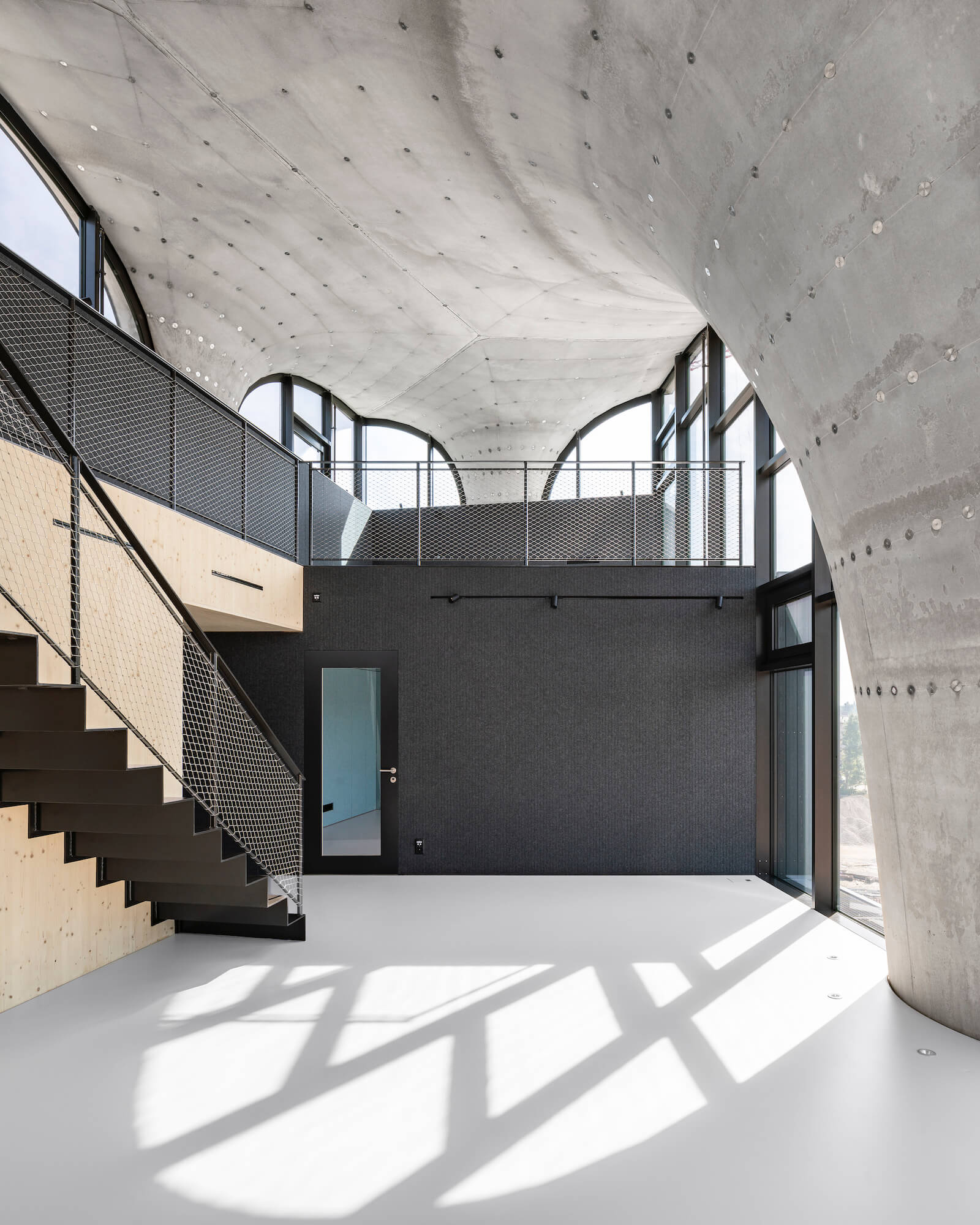 The raw surfaces lend an ever-present tactile reminder of the innovative roof structure.

Apart from the double-curved roof – a voluptuous volume that recalls a billowing blanket – the project also explores the application of funicular structures for floor/ceilings. That is, weight-bearing concrete slabs that are both geometrically complex yet minimal in their material makeup; the team says that by using a tensile, rib-stiffened funicular shell instead of a flat plate, it eliminated 70 per cent of the material typically used in reinforced-concrete slab floors. 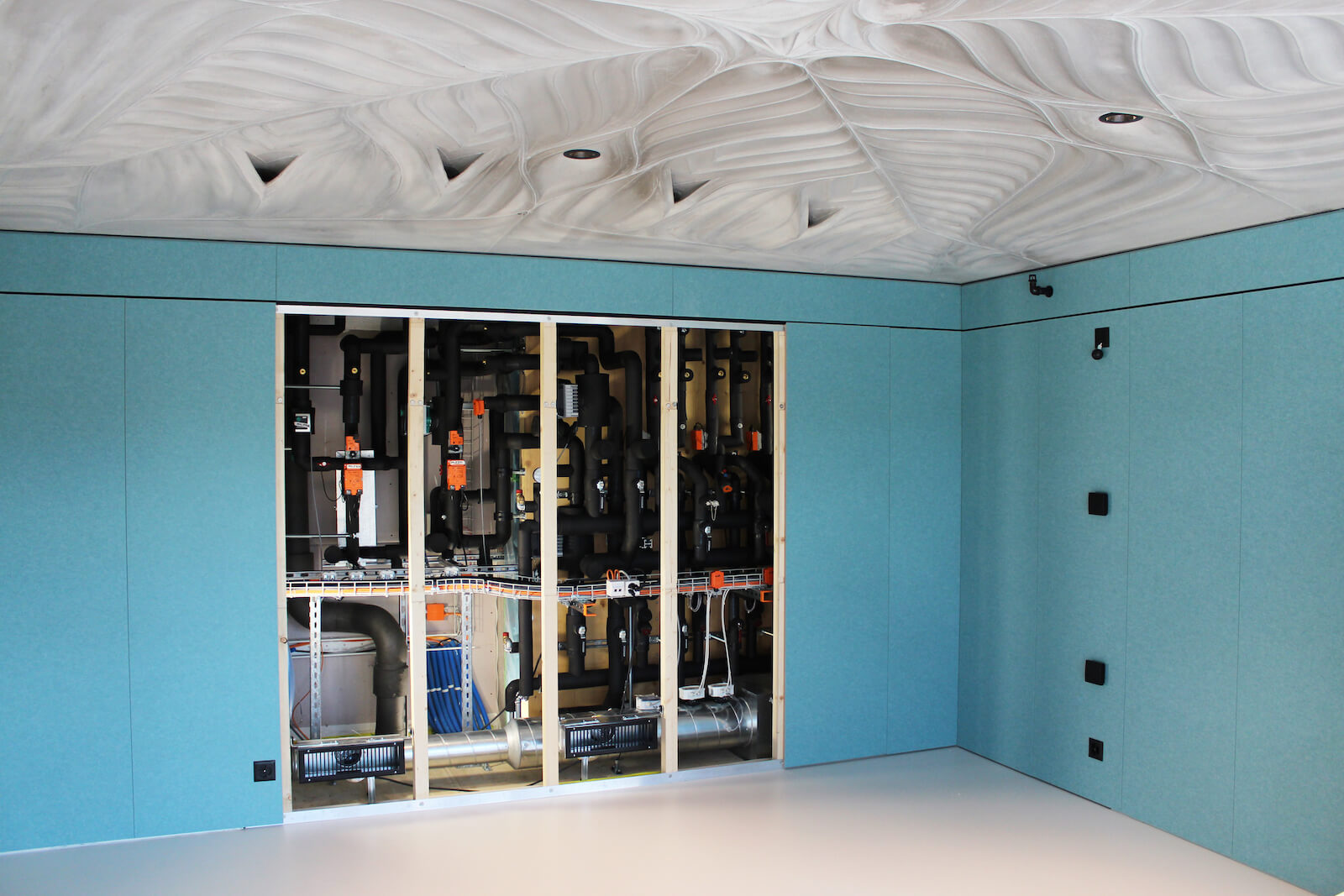 Inspired by vaulted ceiling systems, funicular structures bulk up only where material is needed structurally, and “following the forces of compression and tension.” Digitally sculpted, the structures’ resultant hollow forms allow them to seamlessly integrate energy-efficient HVAC systems. 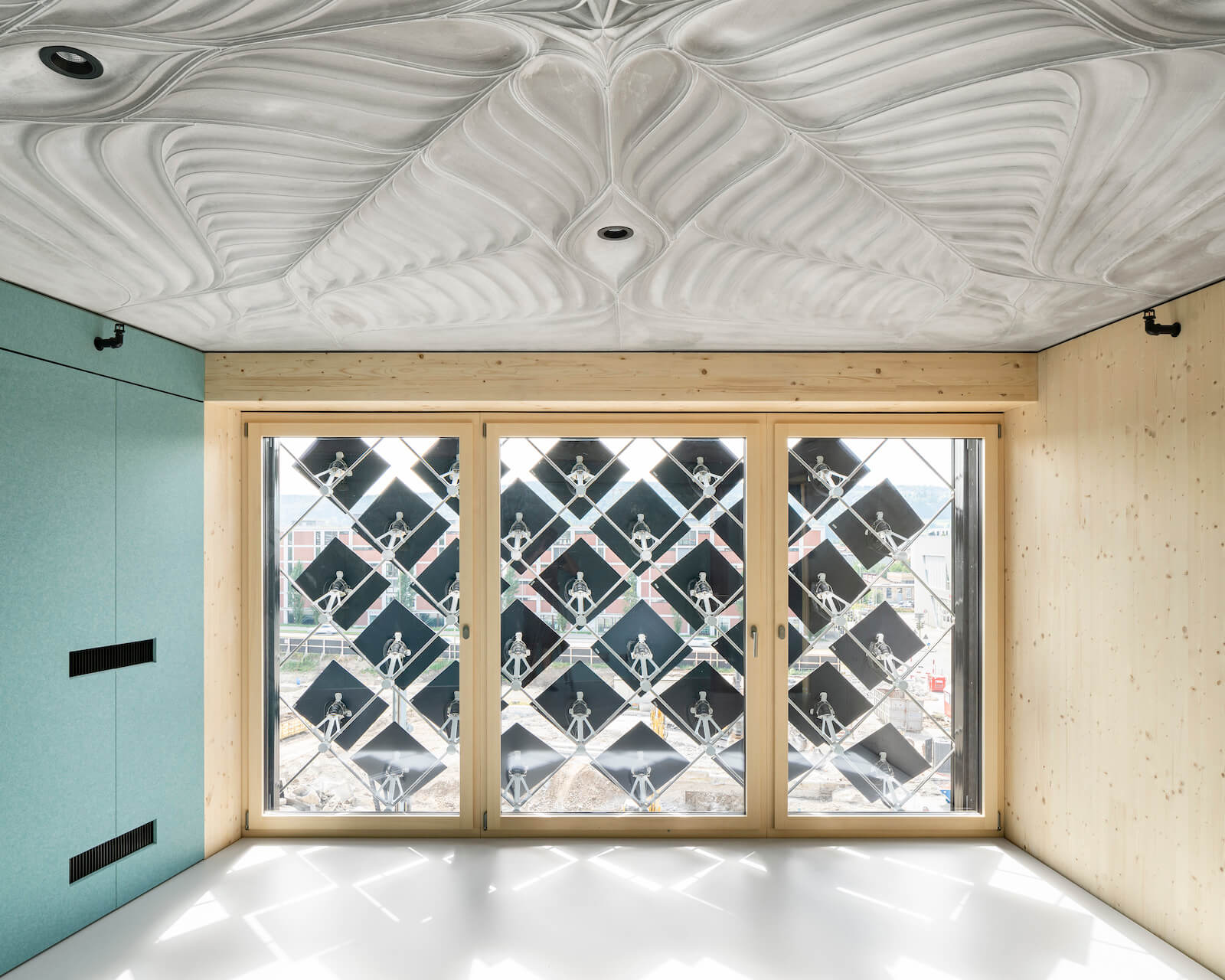 The solar array, as viewed from inside.

The building’s third major device, and one that plays well with those concealed HVAC systems, is a responsive photovoltaic array. While harnessing sunlight into electricity, the 30 flexible modules are positioned in front of a window to mitigate solar gain and help regulate internal temperatures. 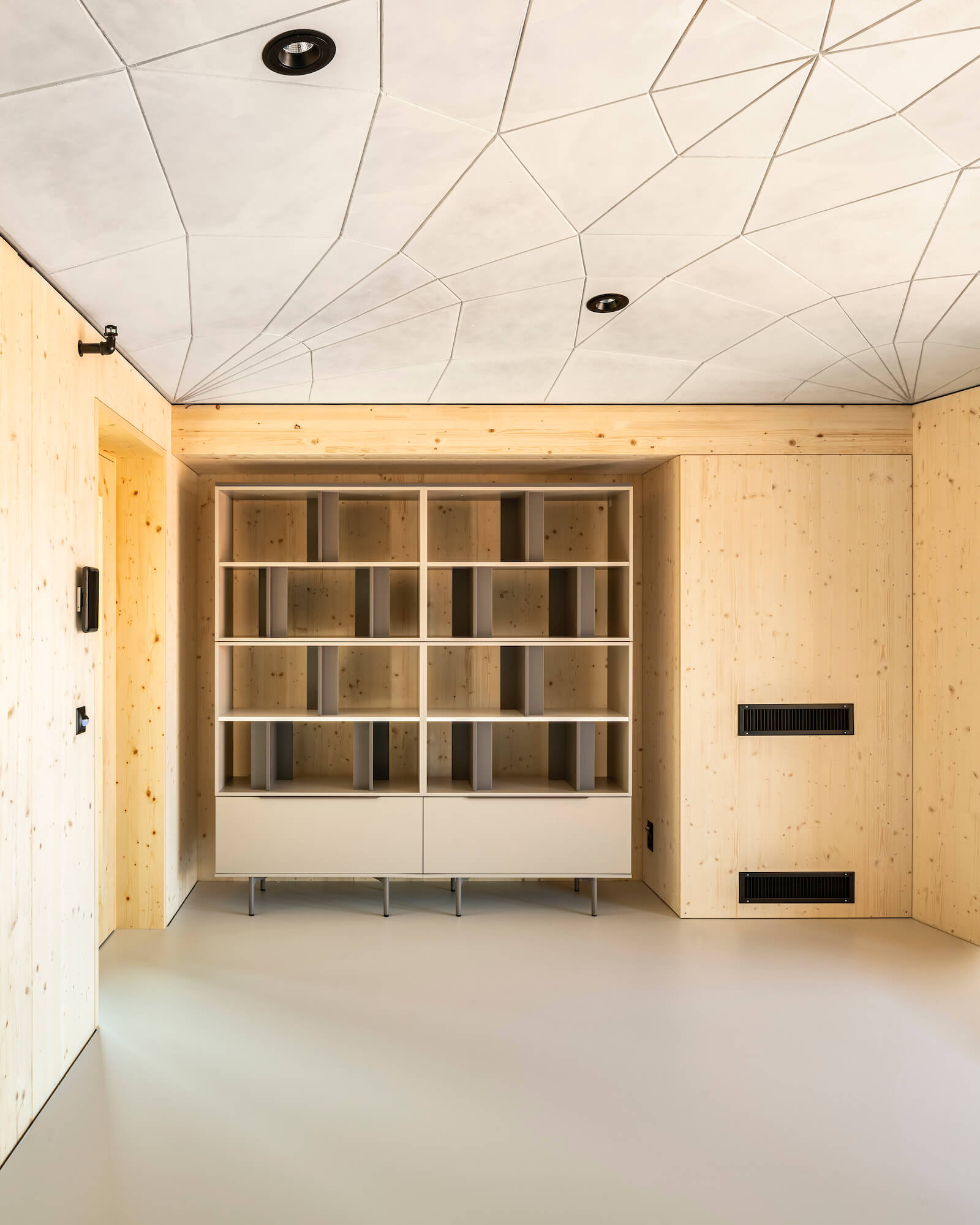 Another funicular slab surface above the HVAC system.

Years after the project’s genesis captured international attention, its completion is even more satisfying to see. While the making of the roof was a viral architecture story, the finished product proves something else: that high-tech eco-concrete can be beautiful. 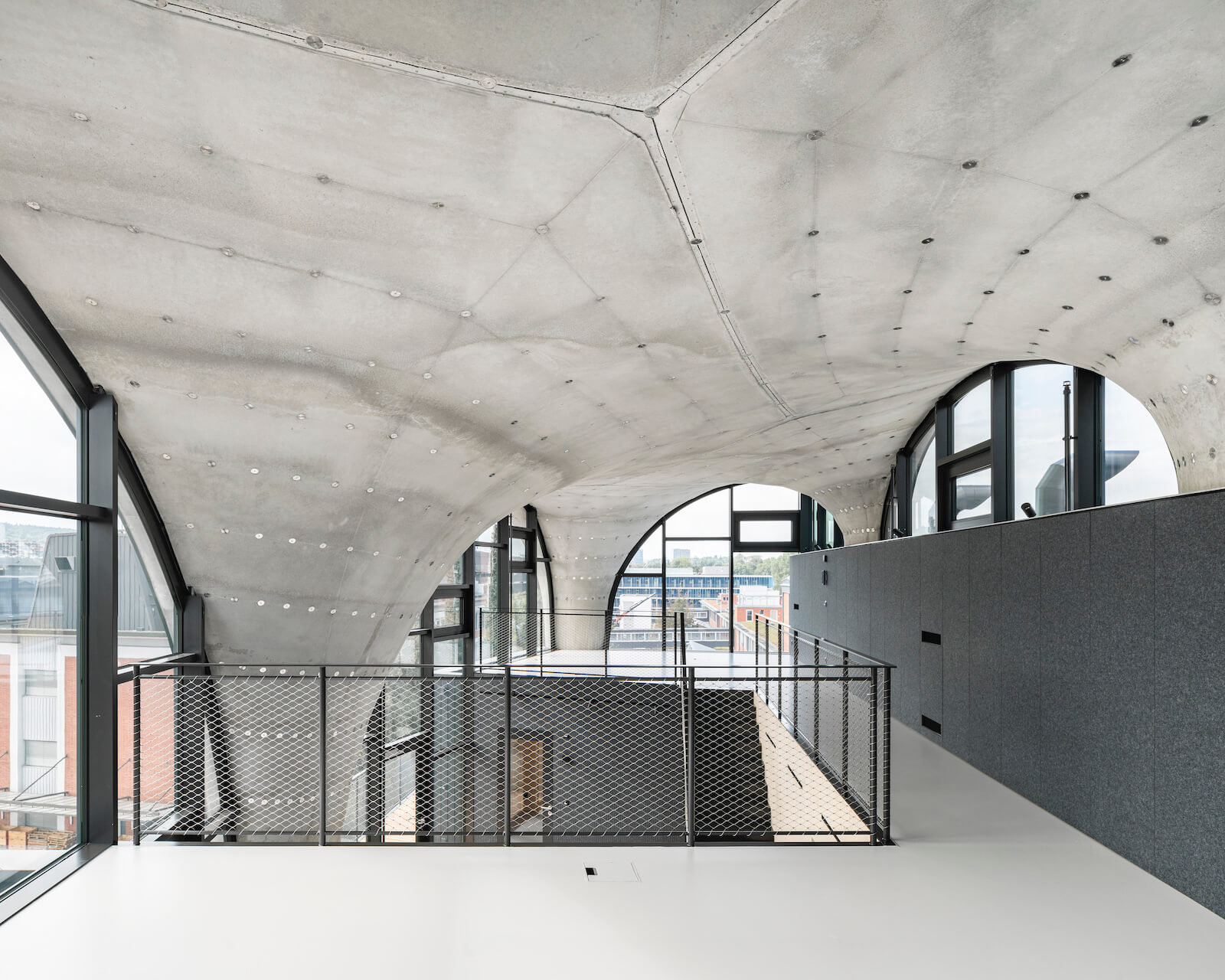 The funicular slabs, especially, which appear as variously textured surfaces throughout the building, make a compelling case for experimenting with material-minimizing concrete from a purely formal stance. The dramatic roof – as the project’s most visible calling card – gives the building’s interiors an operatic feel.