Galileo’s Pavilion in Kansas by Studio 804
Made up of grad students at the University of Kansas, Studio 804 has created sunlight-loving learning facilities for the Center for Sustainability at Johnson County Community College. 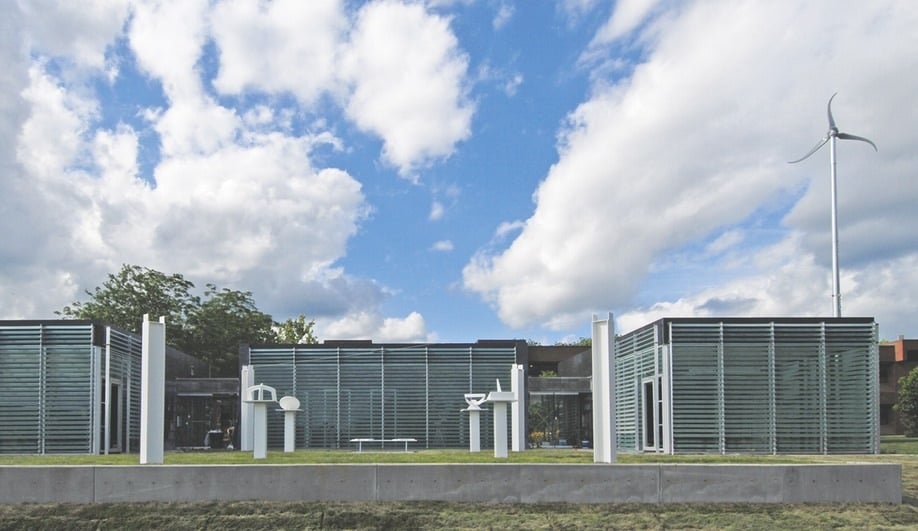 Galileo’s Pavilion for Johnson County Community College’s Center for Sustainability in Overland Park, Kansas, was designed and built by Studio 804. 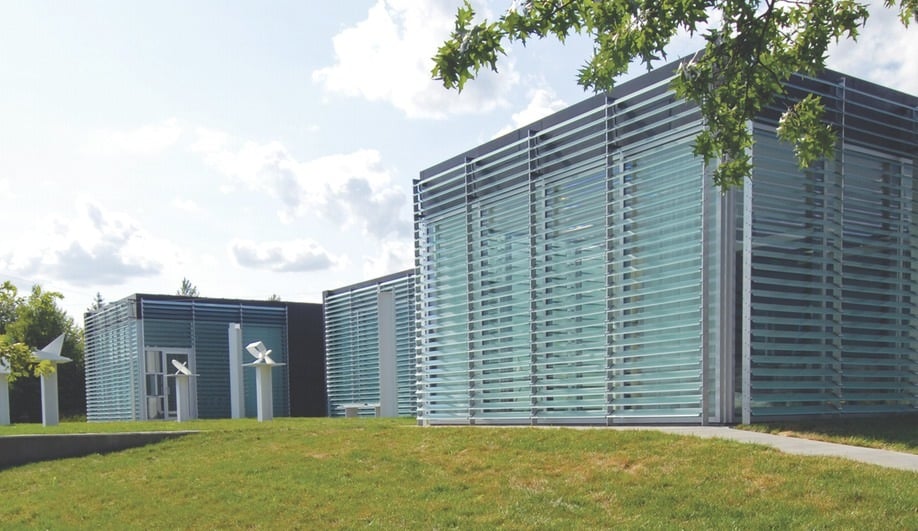 The buildings are connected by entrance vestibules. 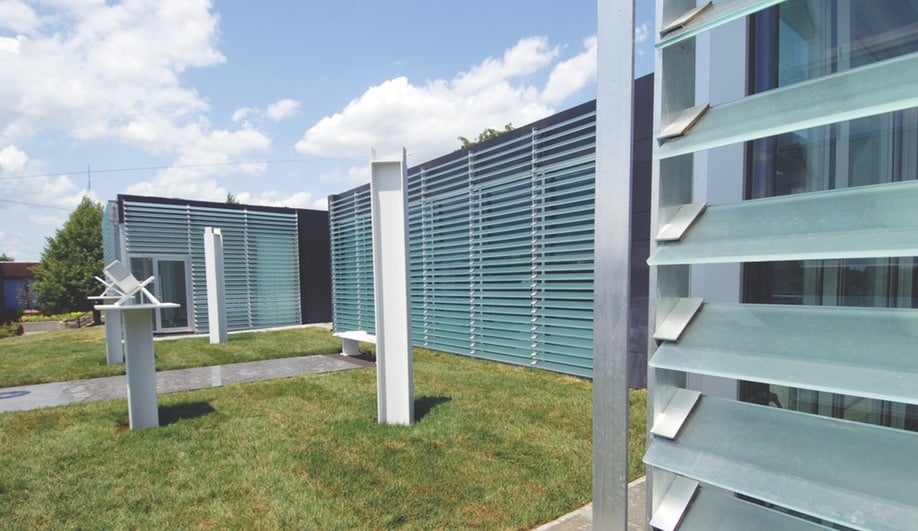 A detail of the louver system, which lets in light but mitigates heat gain in summer. 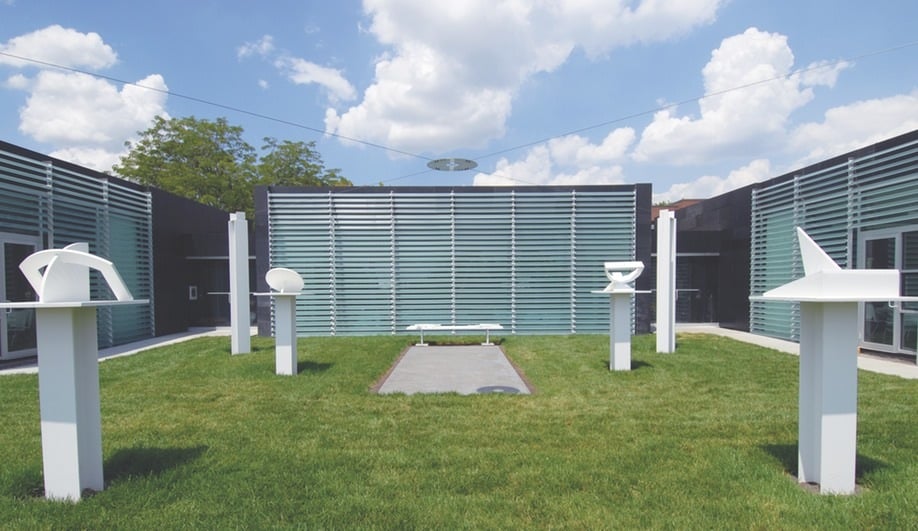 The pavilion was partly inspired by Galileo’s Garden, the series of sculptures by David Eldred that once occupied the site and is now on display in front of the buildings. 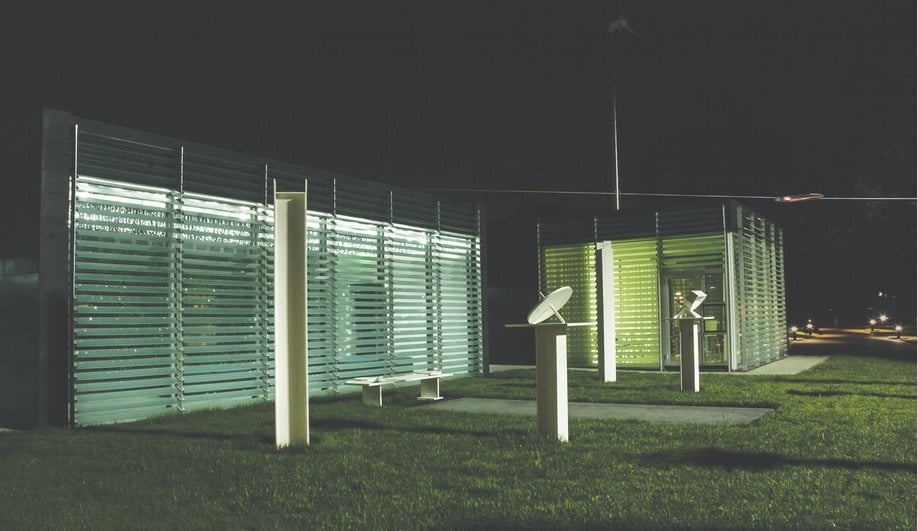 At night, the three buildings making up the pavilion glow like lanterns, an effect enhanced by the green-tinted glass louvers shading them. 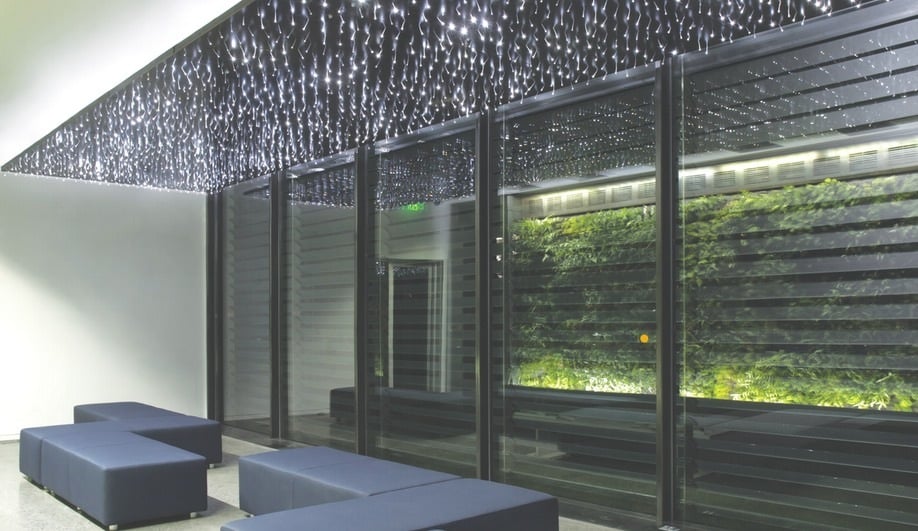 The ceiling in the lounge is lit with a dazzling fibre optic installation. 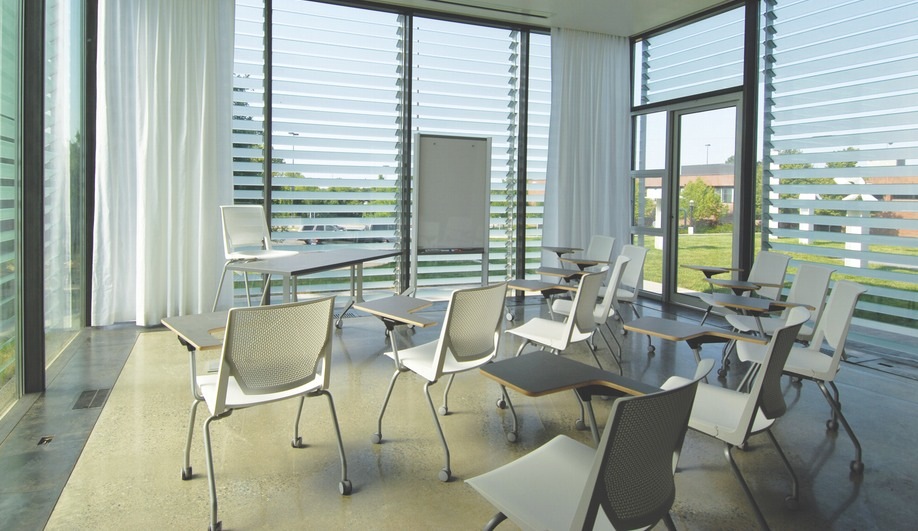 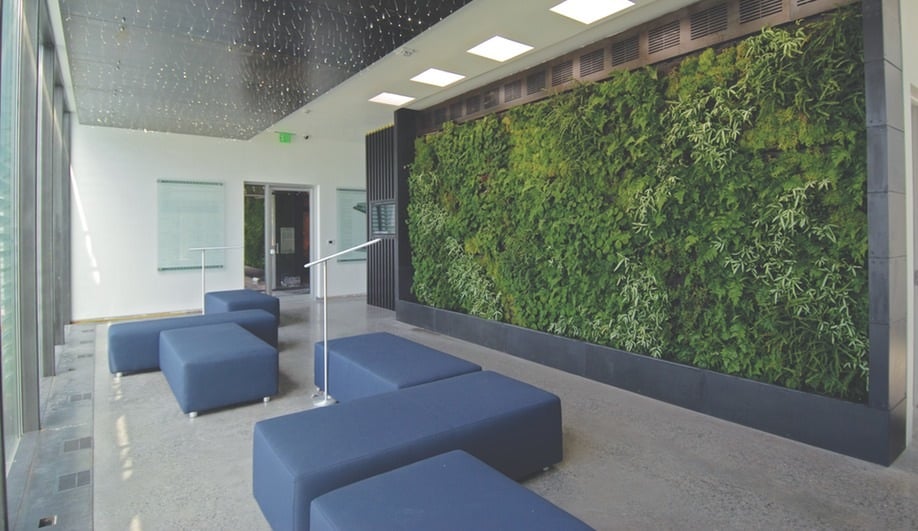 Lush green walls enhance the quality of the interiors.

Each year, Studio 804, a not-for-profit corporation associated with the University of Kansas School of Architecture and Urban Planning, gives architecture grad students the opportunity to design and build a permanent structure over a five-month program. These innovative projects have sprung up near the university’s campus in Lawrence, Kansas, as well as in Kansas City, where the studio has created modular residential dwellings in response to a dearth of new housing.

In August, the class of 2012 completed its already-praised project, Galileo’s Pavilion at the Johnson County Community College Center for Sustainability. With a nod to Galileo’s Garden, a series of sculptures by Dale Eldred that formerly occupied the building site – and are now on full display outside – the pavilion is designed to take advantage of the sun’s seasonal and daily cycles.

It consists of three low-lying boxy buildings, connected by entrance vestibules, and clad in glass curtain walls fronted in glass louvers. The louvers mitigate the intense summer heat, yet allow the sun’s rays to penetrate the interiors, which helps keep them bright and warm in the winter.

Besides this passive strategy, the pavilion’s eco-efficiency is enhanced by its green roof, wind turbine and rainwater harvesting system. What’s more, the sides are wrapped in slate reclaimed from chalkboards. Inside, the spaces are minimal, the only flourishes are lush green walls and a sparkling fibre-optic ceiling installation in the lounge.

If the pavilion’s form also seems ultra-minimal, that might have something to do with the spare aesthetic espoused by Dan Rockhill, who runs the studio. Through his own practice, Rockhill and Associates, the architect has designed homes, such as Sensible House and the Shimomura residence, in Lawrence and Kansas City that maximize passive strategies – such as optimal orientation for daylighting – while hewing to the no-frills regional vernacular.

As well, Studio 804, which raises its own funds, has over the years created buildings that are minimal for both sustainable and practical reasons. Since the projects are prefab constructions, delivered to site fully assembled with only the plumbing and electrical to hook up, they need to be innovative yet feasible to manufacture over two months.

The program began modestly, in 1995, by creating a new roof for an abandoned stone structure, the Barber School House. It has since designed and built such acclaimed projects as the Modular series of prefab homes, spurred by the residential crisis in Kansas City (2004-7); the Sustainable Prototype (2008), which was the first LEED Platinum building in the state; and the handsome Center for Design Research (2011) for the University of Kansas. The 2013 class is already working on the Ecohawks Research Facility at the university.

Along with similar hands-on architecture programs – such as Rural Studio in Alabama and the Architectural Association in London – Studio 804 is preparing students for the real world of architecture.

As Rockhill wrote in 2010, “In the ten years since the studio began, we’ve progressed from small-scale projects to creating affordable housing for the city of Lawrence to the point at which students now design, build, and install prefabricated homes for entry-level buyers in Kansas City.” Perhaps most importantly, the studio is creating environmentally conscious practitioners.

For more on North America’s best design and architecture schools, check out our November/December issue, currently on newsstands.