As the pandemic drives millions of migrant workers back to their rural roots, the architecture firm’s cofounder, Sonali Rastogi, describes a locally focused approach that allows people to flourish in their non-urban hometowns.

It has been 25 years since the inception of Morphogenesis out of a home garage. When my partner Manit and I returned to India in 1996 from our time at the Architectural Association in London, India was at the cusp of globalization, which presented an incredible opportunity, albeit in very challenging circumstances. Amid a paradigm change in the nascent liberalized economy of the 1990s, the decision to set up an architectural practice was a prescient one. Today, we are a collective of 191 working out of three offices (New Delhi, Mumbai and Bengaluru) on projects in South Asia, the Middle East and Africa. 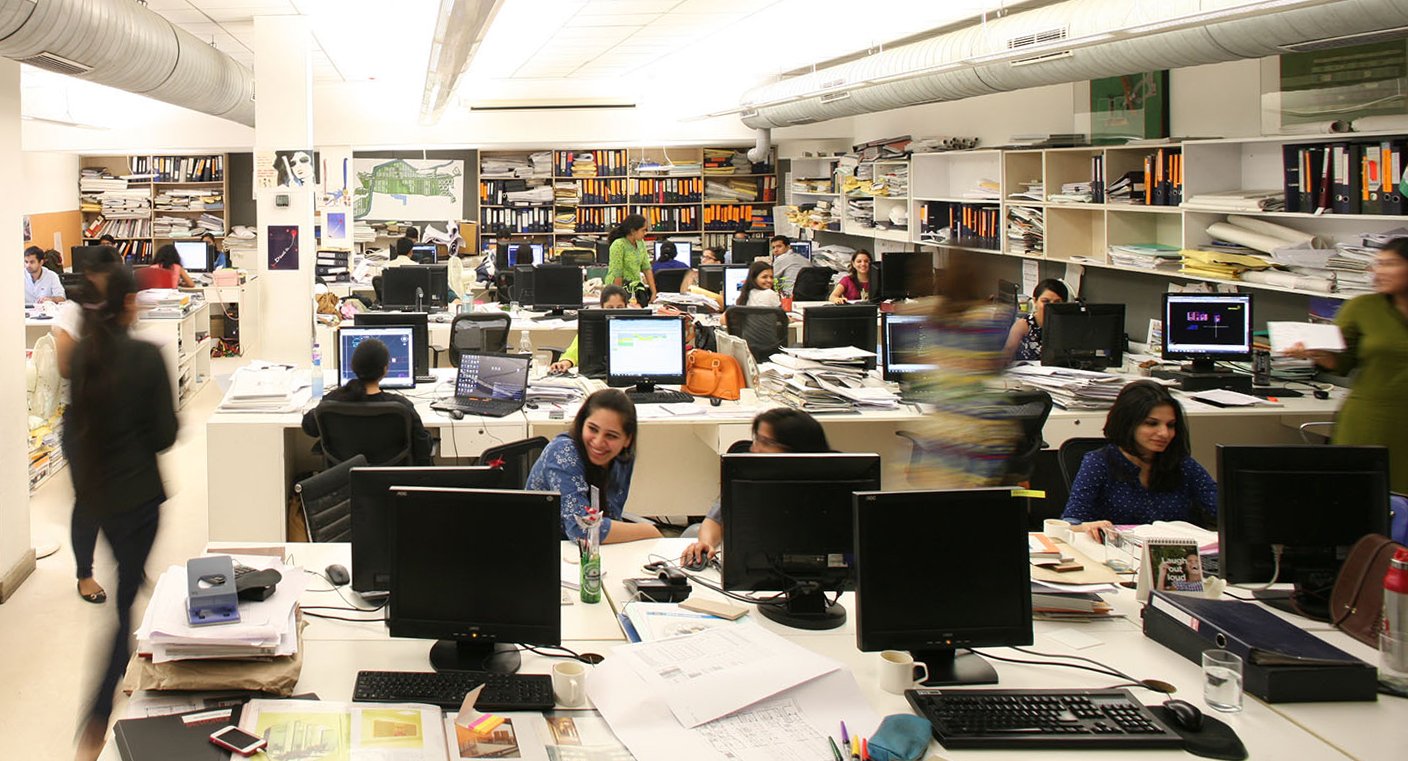 In the last few decades, we have seen multiple adverse conditions in India, but the unique situation of the Covid-19 pandemic has brought to light numerous gaps in our country’s infrastructure. Cities all over India experienced a failure of their ecosystems, and due to the lockdowns, we witnessed the largest post-partition migration to date — an estimated 139-million migrant workers left the factories of the big cities to return to their rural communities.

Most of these workers hail from India’s green belt. In years past, they would move, en masse, to densely populated urban cores where they often resided and worked in dismal conditions and earned minimal pay. This left them with no buffer to deal with the uncertainties brought on by the pandemic.

At Morphogenesis, we have long been trying to understand how to employ people in their own agricultural hometowns, to cut back on internal migration and contribute to the sustainable growth of these communities. 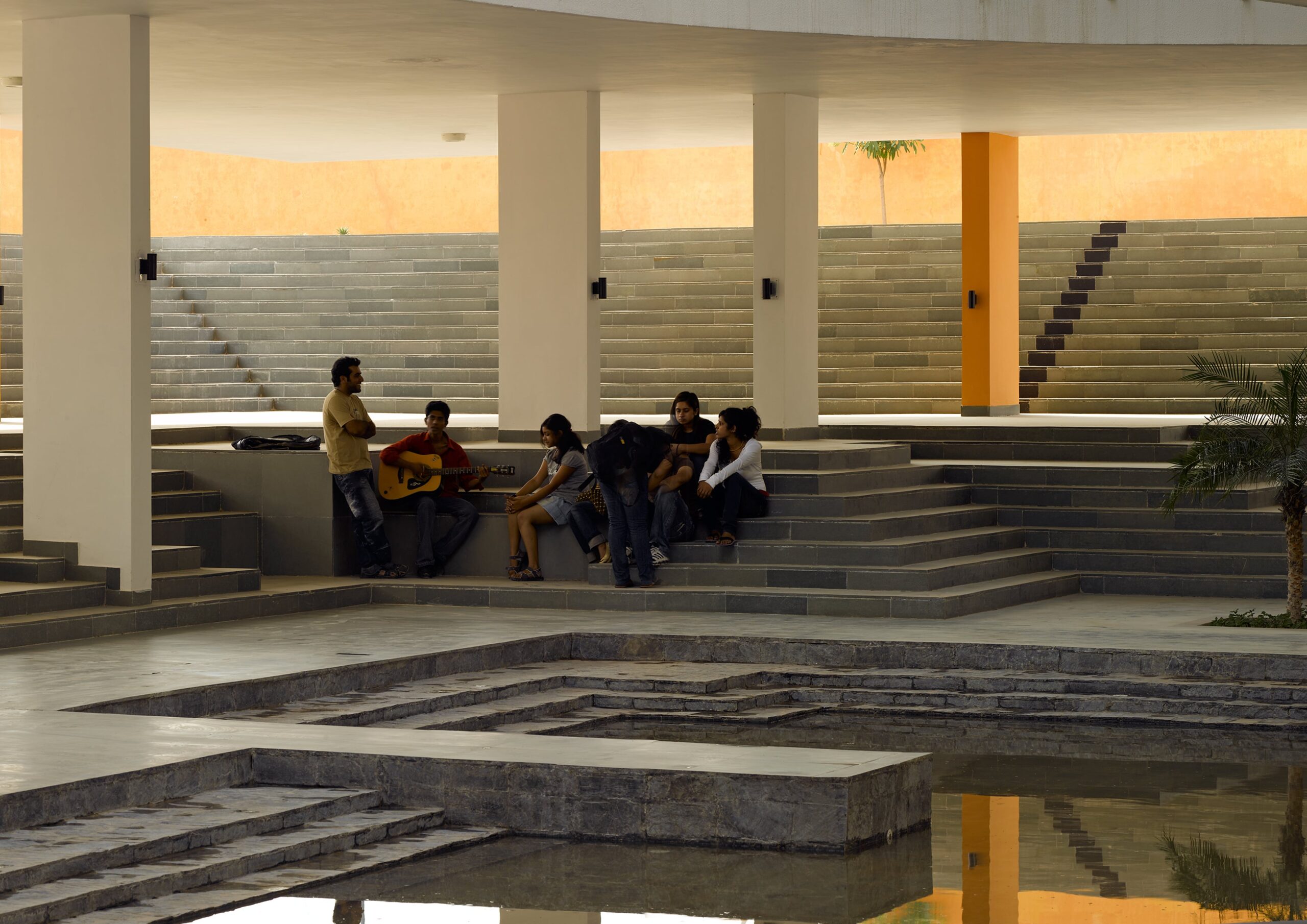 Our practice’s first example of this approach is The Pearl Academy, completed in Jaipur in 2009. Its design was a confluence of modern adaptations of traditional Indo-Islamic architectural elements and passive-cooling strategies commonly used in Rajasthan’s desert climate. The building’s “underbelly” is derived from a traditional baoli (stepwell), and employs earth sheltering, thermal banking and evaporative cooling techniques to modulate surrounding temperatures, even when outside conditions are up to 20ºC higher. To construct and insulate the roof, inverted matkas (earthen pots) were laid across the surface, the space between them filled with sand and broken bricks, and then cast over with a thin binding layer of concrete.

The making of these matkas employed 120 potters and jaali makers for a year. And the success of this project led us to wonder how we could continue to engage local communities and incorporate them in our design process. The construction methods we used — as well as the community approach we favoured — defined our practice from that point onwards. 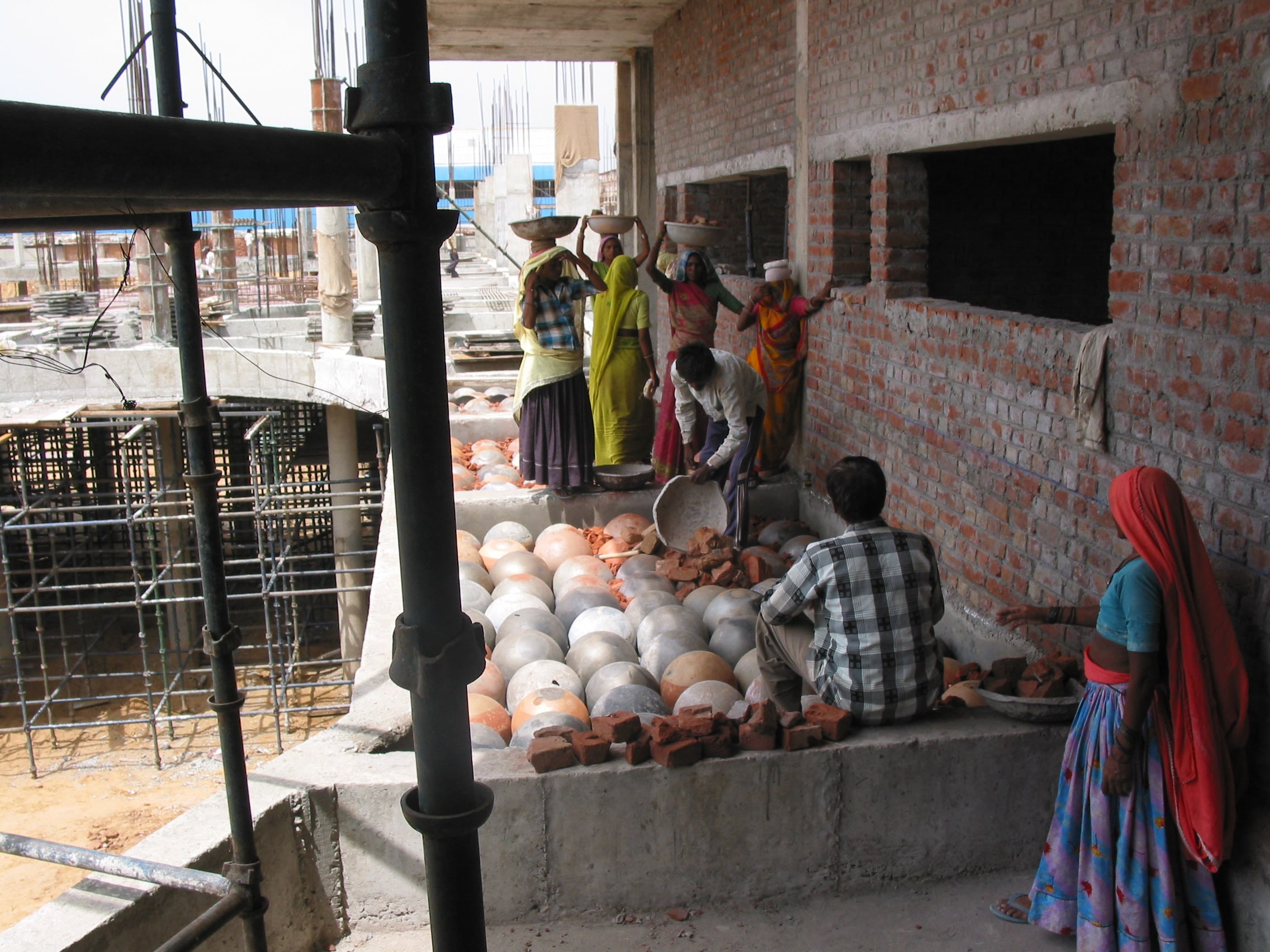 Also at The Pearl Academy, the firm employed traditional methods to build and insulate the roof by using inverted earthen pots.
“At Morphogenesis, we have long been trying to understand how to employ people in their own agricultural hometowns, to cut back on internal migration and contribute to the sustainable growth of these communities.”

Nestled in the Himalayan foothills, uphill from the banks of the River Ganges, Lodsi Community Project for Forest Essentials is one of our more recently completed examples of densifying an agrarian residential area. It consists of a manufacturing facility for holistic products that help to revive the ancient science of Ayurveda. Most of the people living in this area, which lacked basic infrastructure and amenities such as energy, water and roads, were migrating to urban centres. And so, our clients were looking to construct a factory where the local community could be employed in a “walk to work” environment — where they wouldn’t have to trek kilometres across aggressive slopes to reach their workplaces. 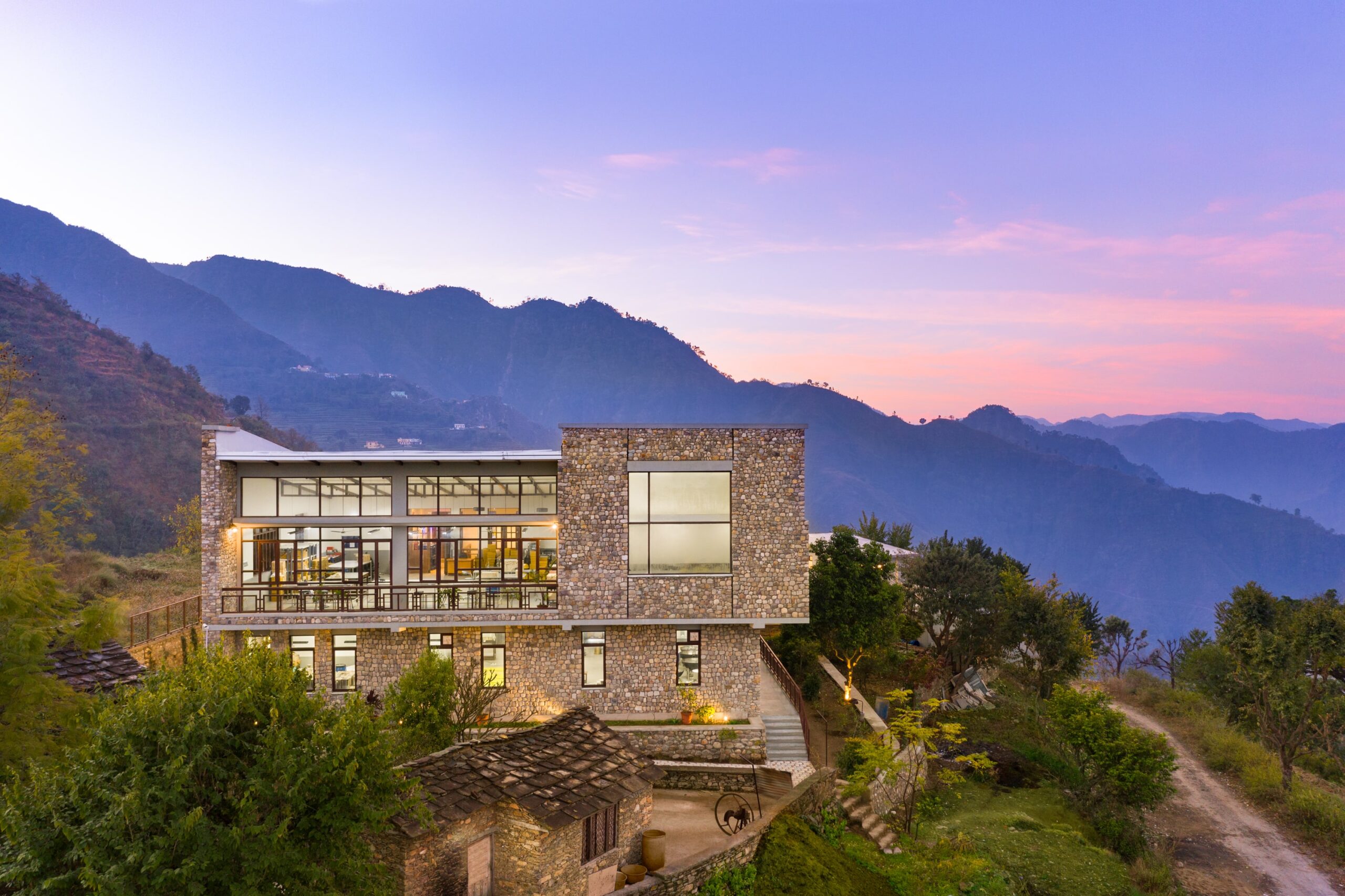 The Lodsi Community Project for Forest Essentials is a prototype for decentralised industrialisation and off-grid hill architecture.

To this end, we placed the building site in the centre of a hillside residential area of over 800 people. Working with the community, we designed an edifice that could be built using locally sourced materials and techniques. The building’s form draws inspiration from its socio-cultural context: the traditional Garwahli kholi (house). The rectilinear volume, oriented along the east-west axis, was designed with a central entry that divides it into two parts. The “butterfly” roof allows for large windows to let in northeast and southeast winds for ventilation and sunlight for naturally lit spaces, as well as to provide unobstructed views of the valley. The tall volume, with clerestory windows, enforces Bernoulli’s principle and helps moderate indoor temperatures. 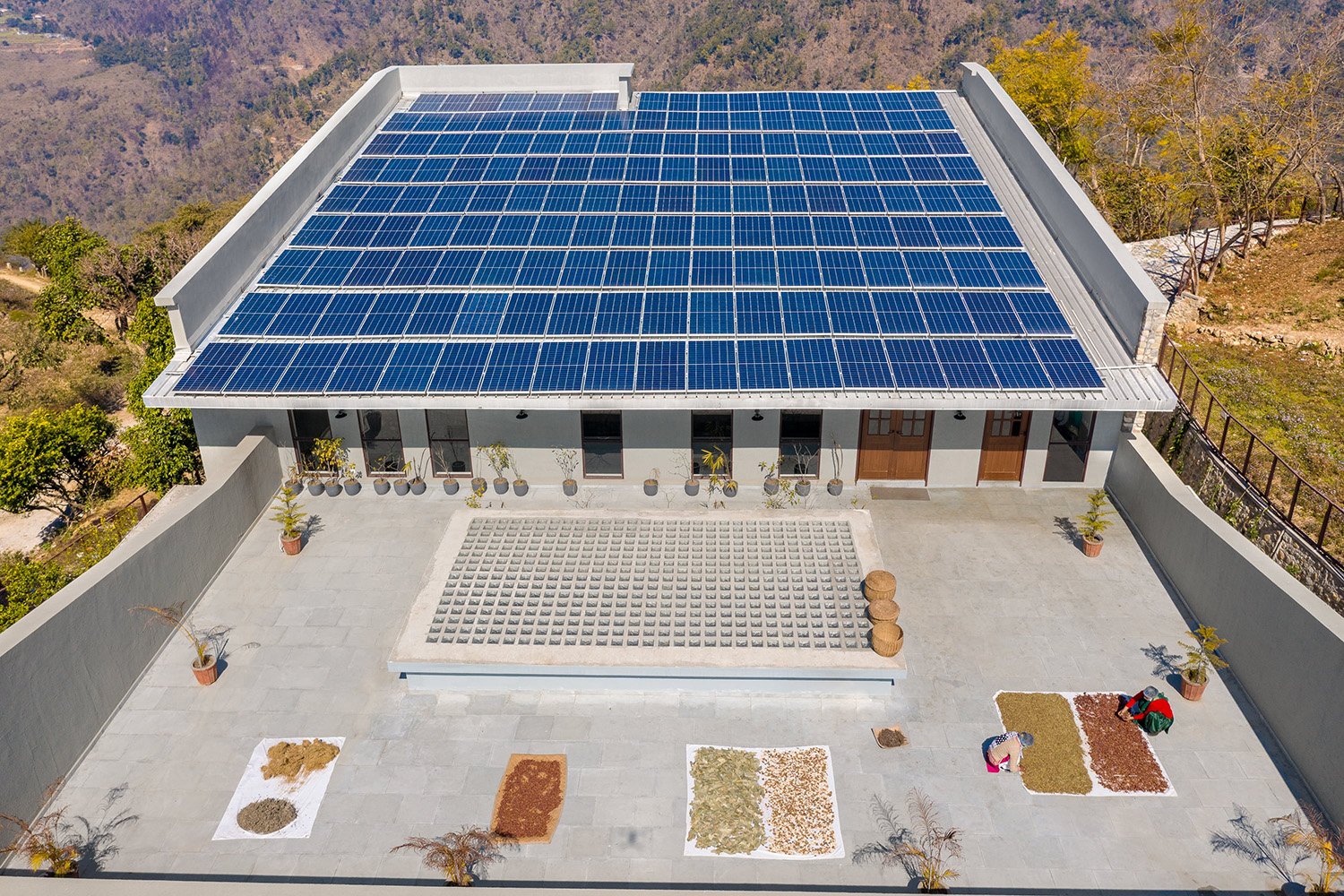 At Lodsi, the large aangans (gathering spaces) are used for drying herbs and for community gatherings.

Glass blocks cover the courtyard, which is inspired by the kholi to provide an illuminated central communal space. The existing gaushala (cow shelter) was incorporated in the planning and augmented with a community gathering space. Providing these large aangans (gathering spaces) promotes the region’s cultural reliance on close-knit community. The project employed 65 village-based workers, directly or indirectly supporting 75 per cent of local households. 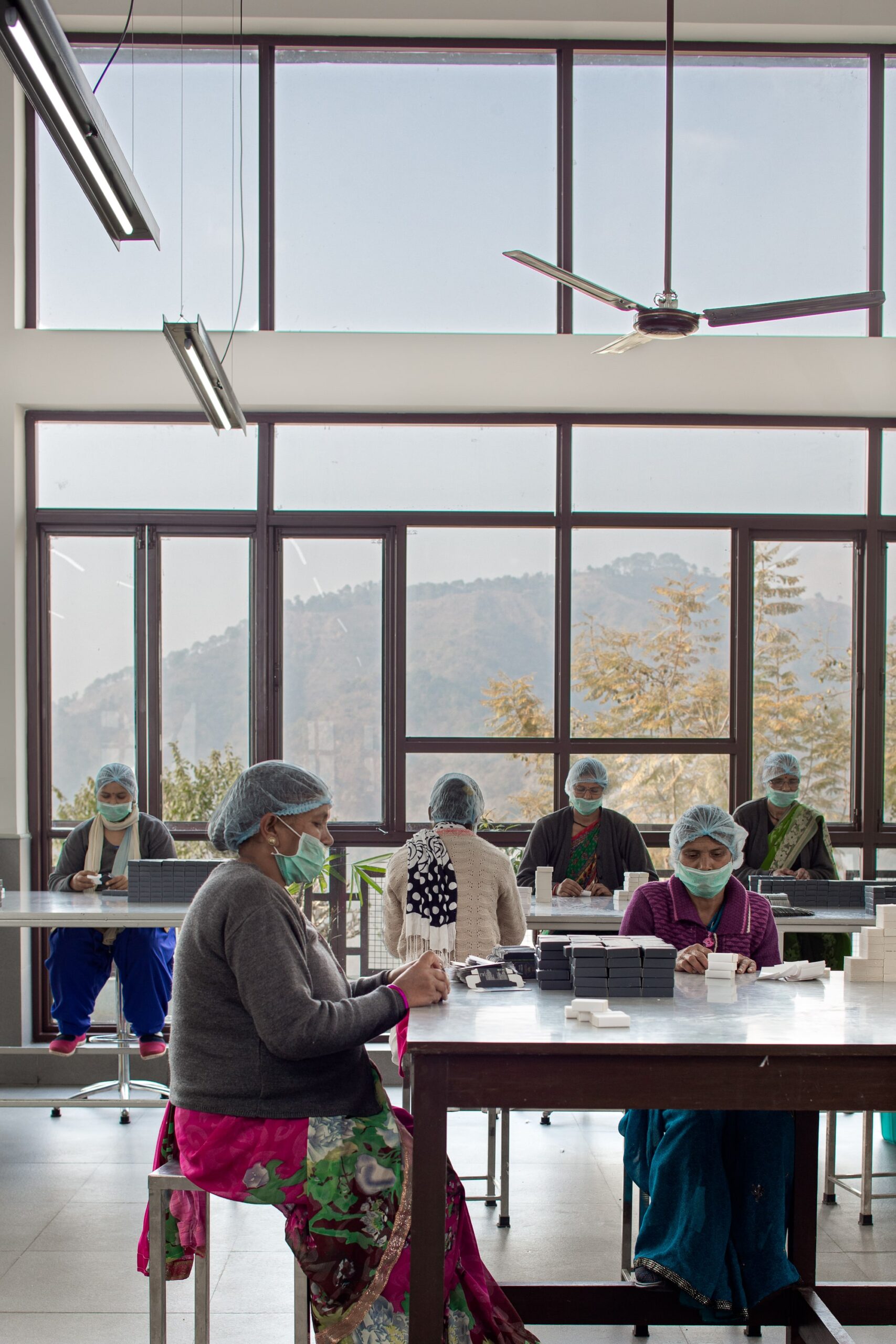 A day-lit packaging hall for ayurveda products at the Lodsi Community Project.

Now, Morphogenesis is working on the ITC Campus in Rajarhat, an upcoming suburb of Kolkata that is being developed to handle mixed-use urban density. The campus is spread across 17 acres and will soon become home to commercial offices, a hotel, a convention centre and residential towers. We aim to create an identity for the project where buildings could become the physical manifestation of the region’s rich artisanal culture. 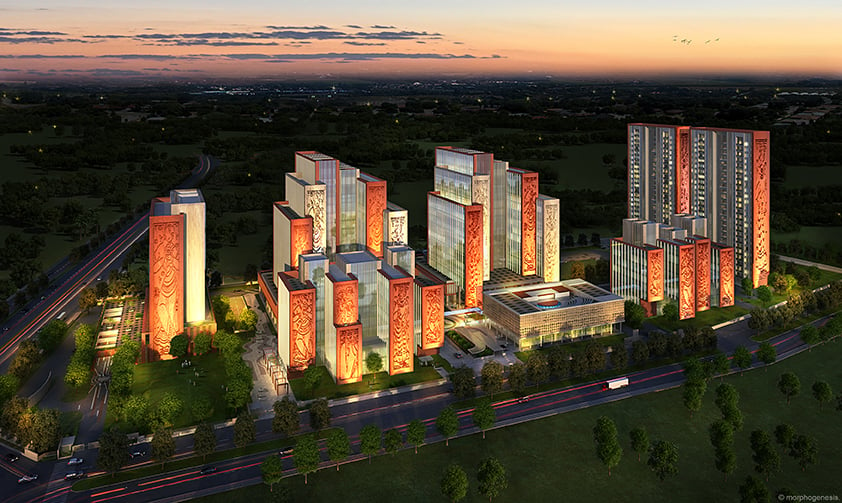 Morphogenesis aims to create an identity for the ITC Campus in Rajarhat, an upcoming project where buildings could become the physical manifestation of the region’s rich artisanal culture.

Usually, the artisans of this region are only active during a short period of the year: the Durga Puja, an annual Hindu festival paying homage to the Hindu goddess Durga. We began to ponder how to incorporate these creators and their ideas to bring arts and crafts into the project. We thought about how to celebrate their culture, display the beauty of their handmade works, and revive their dwindling communities. One answer was to integrate the artists’ work directly into the buildings’ design: The soaring stone facades were manifested as vertical canvasses, in the form of intricately carved murals in the Bengal School tradition. 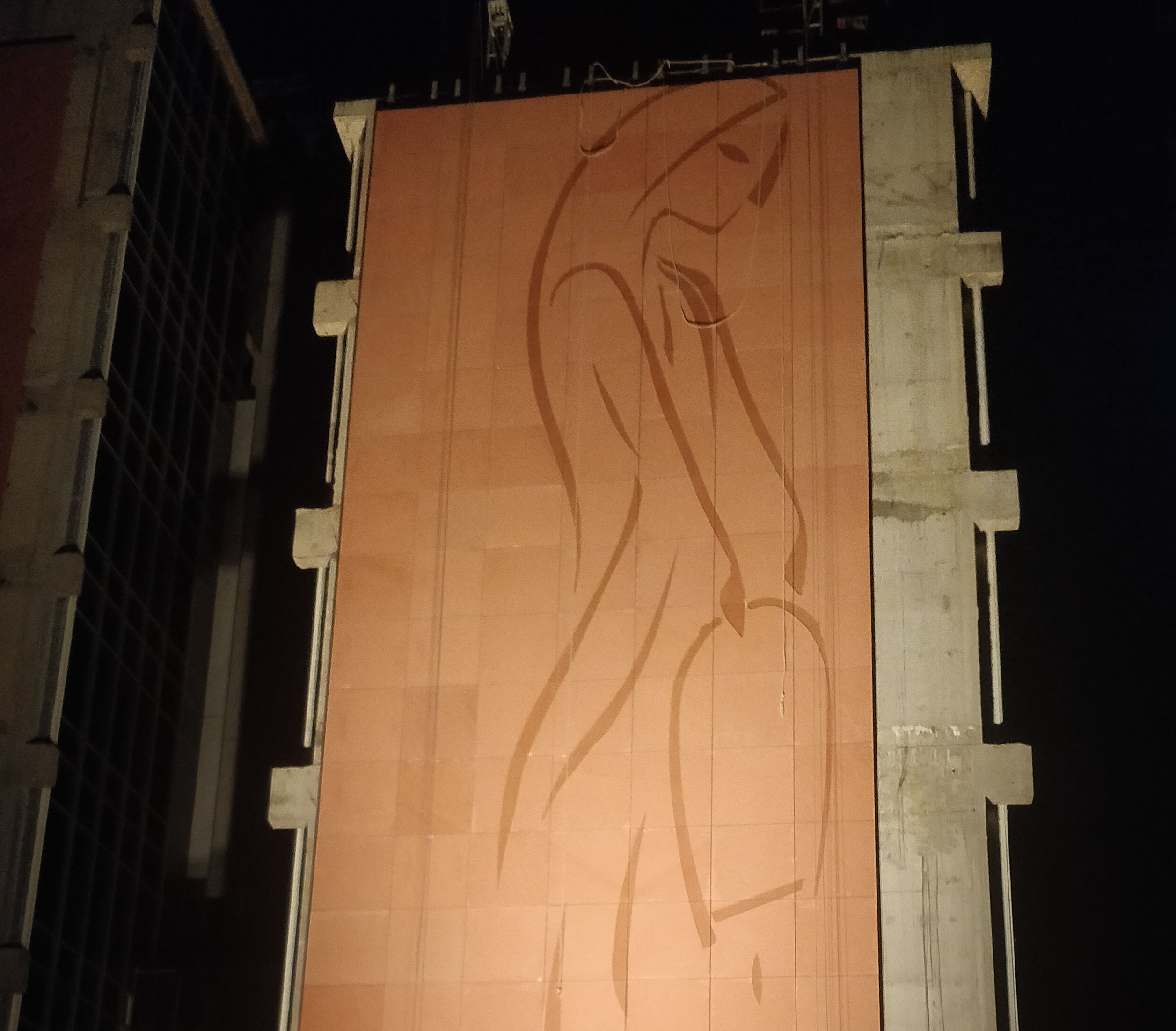 Artwork for the carved facades of ITC was selected by way of a competition where students of the Bengal School of Art were asked to depict the lifestyle and culture of Bengal in minimalist style.

This artistic integration makes perfect sense as a placemaking tool for a new urban campus that will host and celebrate the Bengali socio-cultural ethos, which is one of discourse, deliberation and communal festivity. Taking inspiration from pandals (temporary pavilions), the project will include public spaces scattered along the entire central spine; these will function as open-air museums where sculpture and art installations will add to the sense of place.

All of these projects are aimed at creating micro-ecosystems for non-urban communities. This intention, coupled with a vernacular approach, allows us to generate employment for locals and empower them to take an active role in nation-building and ultimately improve and strengthen their own community ties.

As the pandemic drives millions of migrant workers back to their rural roots, the architecture firm’s cofounder, Sonali Rastogi, describes a locally focused approach that allows people to flourish in their non-urban hometowns.