IIDEXCanada 2014: What We Saw and Loved
Beautiful eco-wood furnishings, innovative lighting installations and inspiring talks from star architects - last week's IIDEXCanada expo in Toronto delivered the goods. Here are our favourite moments from the show. 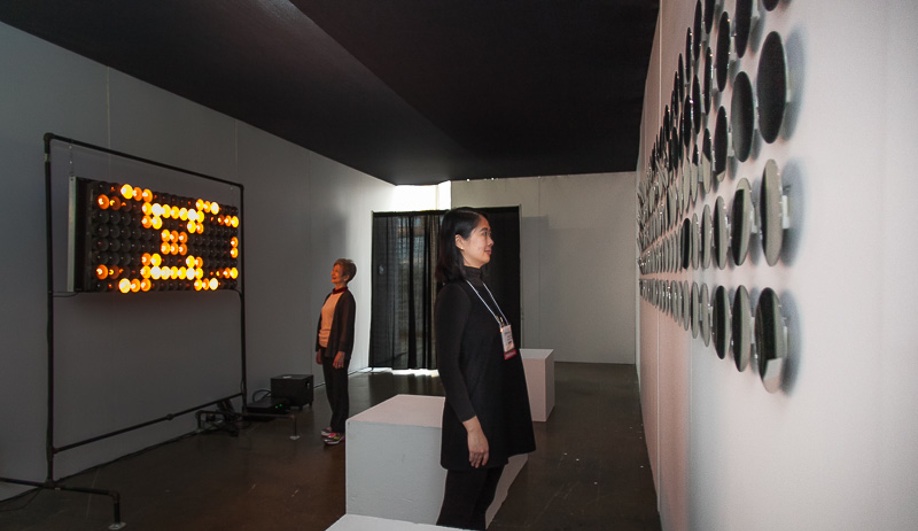 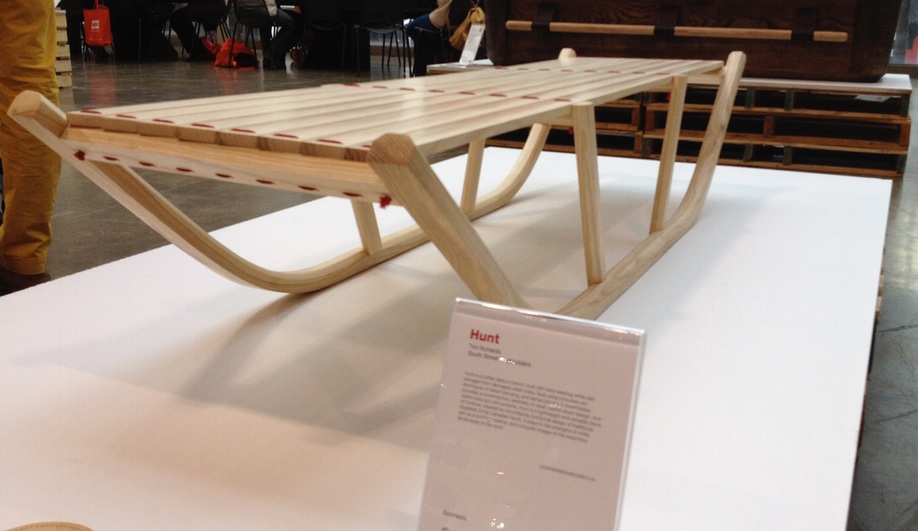 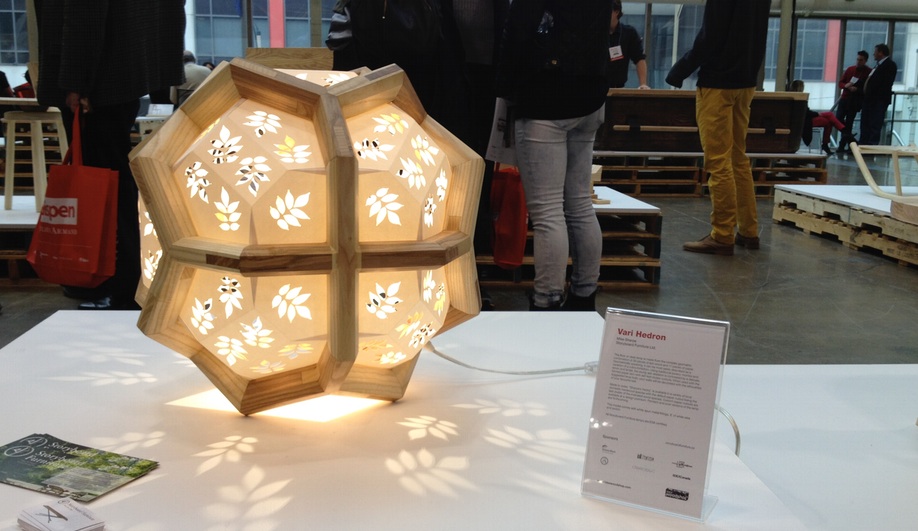 1 Woodshop special feature
For the second year, the show hosted a specially curated exhibit of furnishings, lighting and home accessories realized in ash wood, including Hunt, a sleigh-like table with gliding lines, designed by Tim Richards of South Street Boatbuilders; and Hedra, a shadow-casting lamp with a die-cut shade, by Mike Sharpe. This initiative, for which the City of Toronto teamed up with Ontario Wood, makes beautiful use of trees damaged by the Emerald Ash Borer and whose timber may otherwise have gone to landfill. 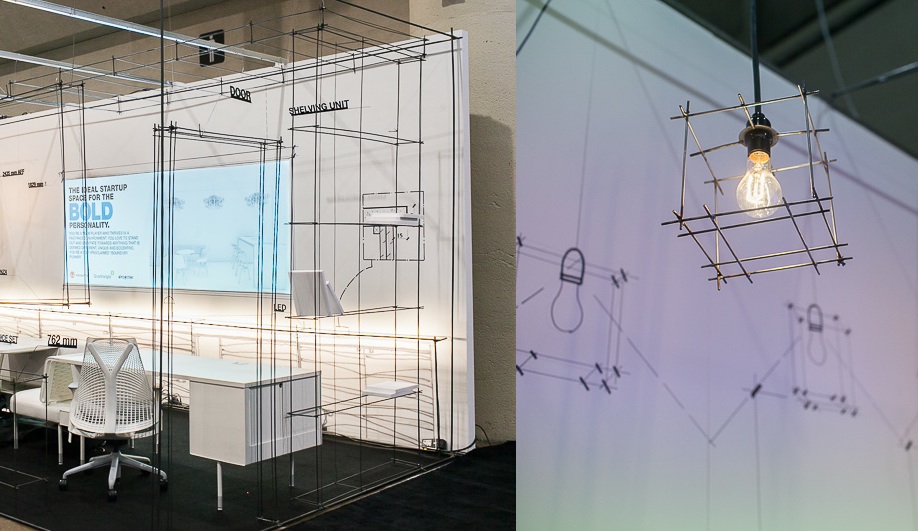 2 StartupSpace special feature
A trio of booths spoke to the rapidly changing needs of tech startups by teaming architects and designers with furniture manufacturers to demonstrate concepts for flexible work environments. Bartlett & Associates worked with Henderson Group and Davis to form a laid-back space with an ever-changing projected backdrop and Quadrangle Architects placed Herman Miller products in a wire-formed “living sketch” inspired by the similarity between the design and startup processes.

3 Control Booth lighting feature
LeuWebb Projects collaborated with software designer Omar Khan and molecular biologist/electronic musician Jeff Lee on this immersive installation. Featuring Lee’s soothing-yet-upbeat sounds and a wall of mirrors opposite a shifting program of reflected lights, the piece was tucked away behind a dark curtain, in the middle of the Light Canada feature, to form a soothing escape from the bustling show floor. 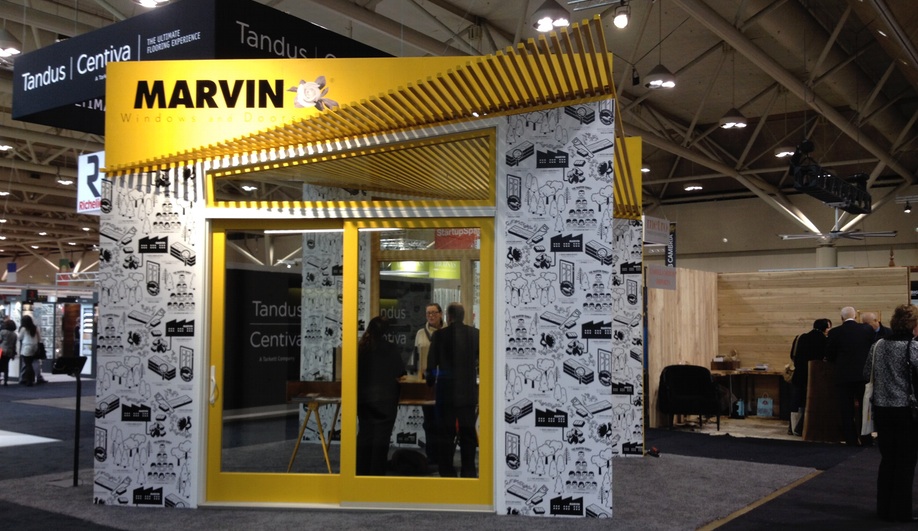 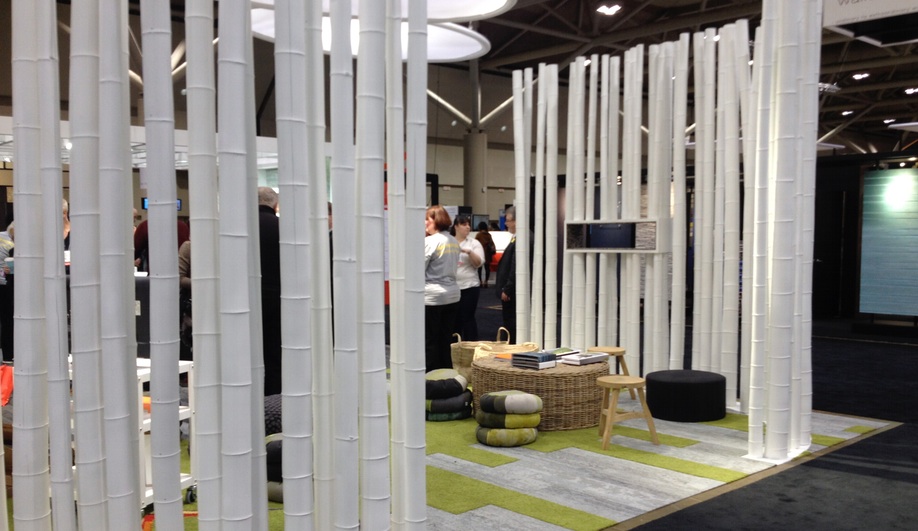 4 Award-winning booth designs
Several booths were rewarded for standing out from the crowd. Marvin Windows & Doors had a bit of fun with the illustrations that adorned its bright-yellow stand enclosure. Interface wrapped its Human Nature collection, which borrows textures and tones from our natural environment, in a ring of white trees. Weaver’s Art made the most of its allotted floorspace, layering hundreds of luxurious and colourful carpets over a ribbed structure, and piling high even more inside, to be flipped through, or used as seating. 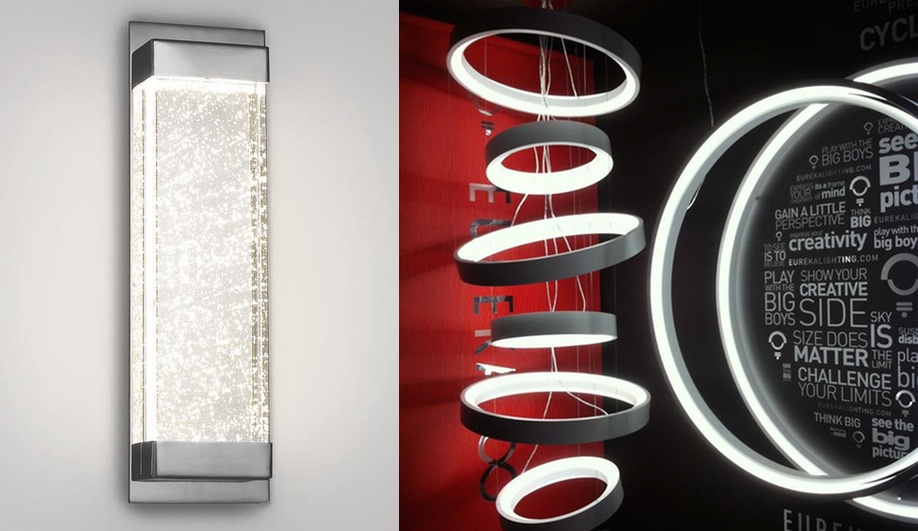 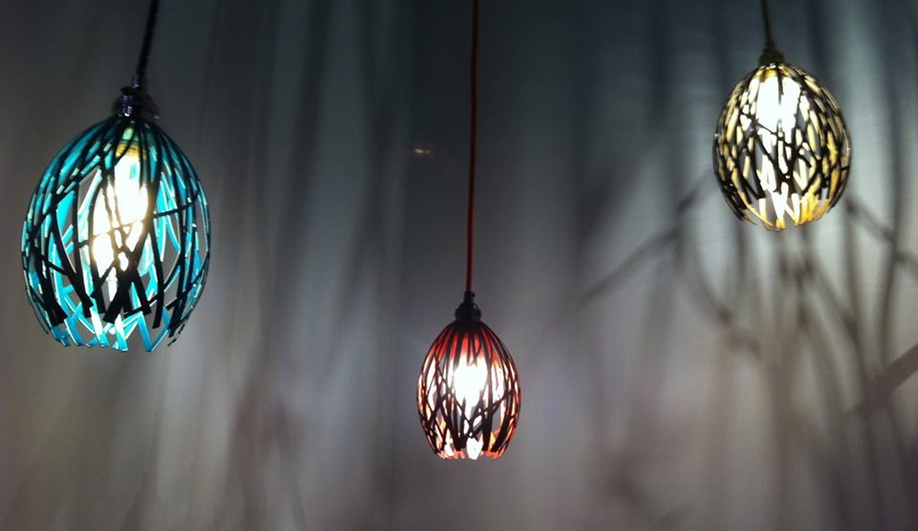 5 Stylish lighting
At the biennial Light Canada, familiar brands were on hand, including WAC Lighting, which featured its sparkling, solid-crystal Mythical sconce; and Eureka, showing off the loopy Cycle lamps, which hang as pendants or on a wall. Smaller brands, like Halifax’s Luxi Studio, headed up by goldsmith and metalworker Alisha Boyd, represented contemporary artisanship. 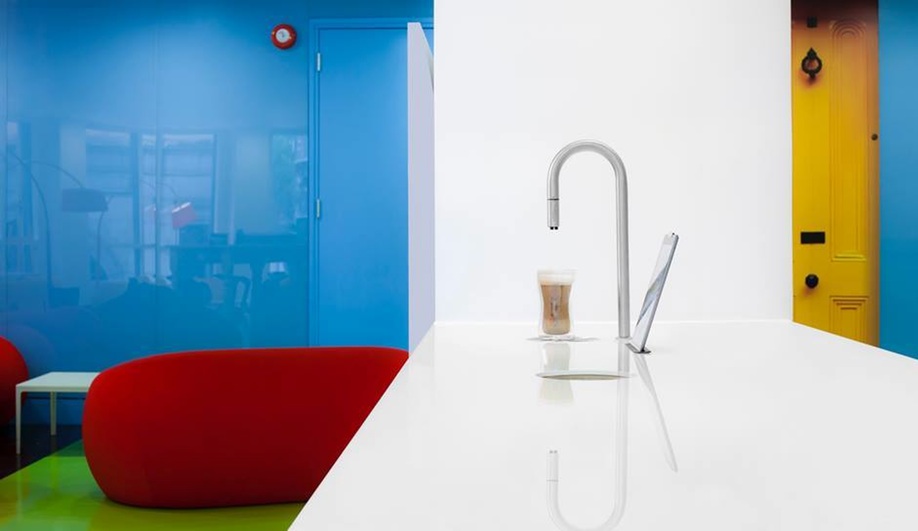 6 Refreshing tech
The enticing aroma of fresh brewed coffee lured attendees to the TopBrewer booth. The Danish-made coffee tap is fully automatic and controlled from a smartphone or tablet, and was a natural match with Canadian distributor Bruno Colozza’s coffee roasting business. On the other side of show, crowds gathered around MultiTaction‘s massive, multi-module touch screens that support unlimited users and touch points, hand recognition and can even be scribbled on with special pens to brainstorm and sketch out new ideas. 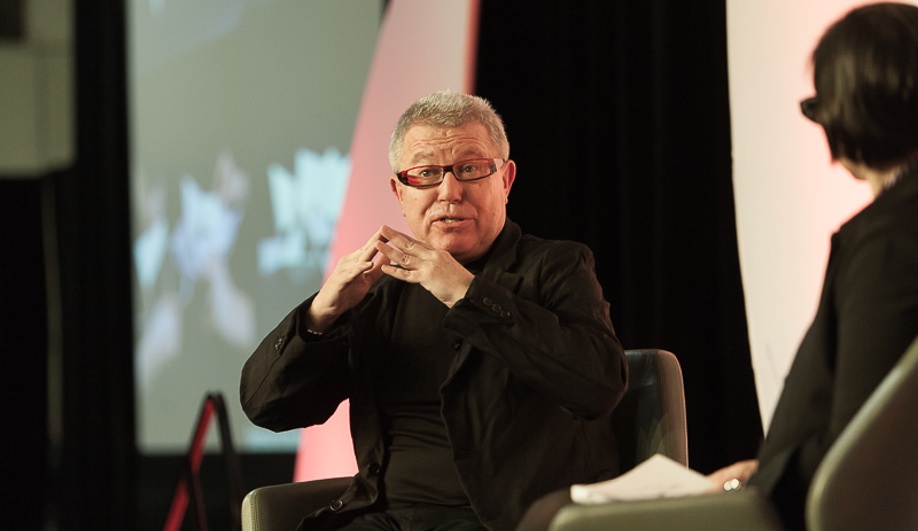 7 Inspiring speakers
This year’s keynotes included a talk with Toronto developer David Mirvish and Gehry Partners’ David Nam, who spoke about their scaled-back tower project, proposed for downtown Toronto, in not-so-specific terms. “What you see now is just an ambition,” said Mirvish. Daniel Libeskind – who joined Azure editor Catherine Osborne on the Keilhauer Keynote Stage for an eclectic and highly entertaining chat – shared his love for the city, where his L Tower is going up. “Toronto has incredible people, diversity, energy and is poised to be transformed in a radically good way,” he said. 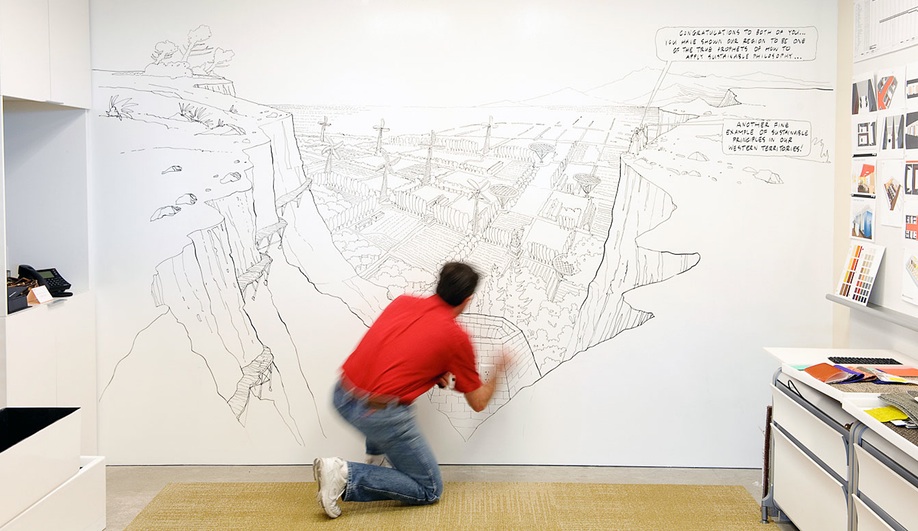 8 Innovative ideas at all stages
From the concepts in the Woodshop, to the sketches on the IdeaPaint whiteboard walls at Levey Industries‘ booth, fresh ideas were everywhere at IIDEX this year. The company’s Create Clear coating allows any wall, in any colour, to be transformed into a dry erase surface, providing ample space for architects and designers to plot new projects.