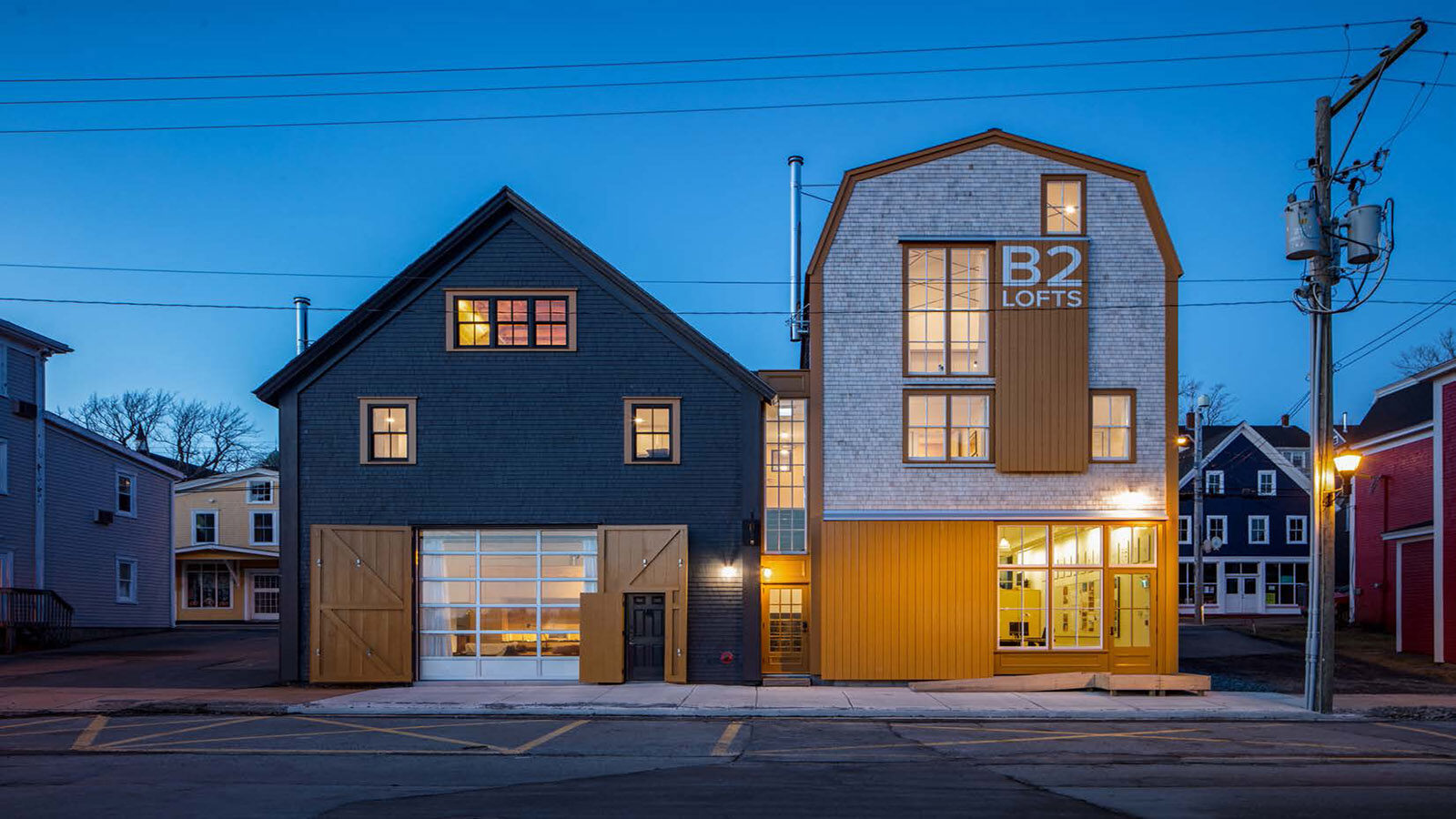 In Nova Scotia, a Mixed-Use Infill Straddles Tradition and Modernity

MacKay-Lyons Sweetapple Architects reinvigorates a narrow lot in the historic town of Lunenburg.

Perched on the edge of the Atlantic, on lands long inhabited by Mi’kmaq and Acadians, the small town of Lunenburg is a colourful treasure trove of 19th-century vernacular architecture. In fact, its clapboard houses are seldom modified — until now. Visible on approach from the harbourfront, MacKay-Lyons Sweetapple’s (MLSA) recently completed project celebrates the rich history of the former fishing town and UNESCO World Heritage site while cultivating a dynamic new presence.

Nova Scotia’s cool Atlantic climate is characterized by constant freeze/thaw cycles, resulting in a high weathering rate for buildings. In response, economical and lightweight wood buildings have historically taken precedent over heavier materials. Designing with Maritime vernacular architecture in mind, and employing what the firm calls “architectural good manners,” MLSA sought to create a building that would integrate seamlessly into the Lunenburg streetscape.

Dubbed B2 Lofts, the project houses six loft-style apartments, as well as two street-level commercial spaces — one of them inhabited by the firm’s new offices. Although Nova Scotian architect Brian MacKay-Lyons and the team at MLSA acquired this property as developers, they built it as architects, paying special attention to cohesion and context while infusing the building with modernity.

The project is made up of a renovated historical building and an adjacent new building; at first glance, it can be hard to distinguish which is which. While deferential, MLSA’s new build is perhaps the more eye-catching of the two; with a lighter gross-grain wood façade accented by marigold trim, its dynamic form subtly stands out from its neighbours while remaining in line with the British Colonial style of old town Lunenburg. Traditional features such as pop-scaled fenestration and barn doors are paired with a modernized shape and high ceilings. A gambrel roof tops the building, blending in among the gabled roofs and bright-red facades interspersed nearby.

Inside, each of the modern residential suites is accented by architectural details rooted in local history. Across the ceiling of one loft, spiderweb-like steel trusses recall the area’s shipbuilding tradition and the metal industry that accompanied it. In another, a four-metre-high glass sliding door opens directly onto the harbour, gently blurring the boundary between inside and out.

For all their historic reverence, the lofts are also economically forward-looking and distinctly community-oriented, with the mix of uses and subtle infusion of residential density intended to help sustain the local economy without catering exclusively to tourists.

For Brian MacKay-Lyons and MLSA, B2 Lofts is another standout entry in a portfolio of contextually attuned modern architecture. It is a complex that emerges from — and elevates — its surroundings.

MacKay-Lyons Sweetapple Architects reinvigorates a narrow lot in the historic town of Lunenburg.