Jaime Hayon Made This Madrid Hotel into a Charming Tribute to Spain
For a hotel in Madrid, designer and artist Jaime Hayon conducts a whimsical journey through Spain's past and present. 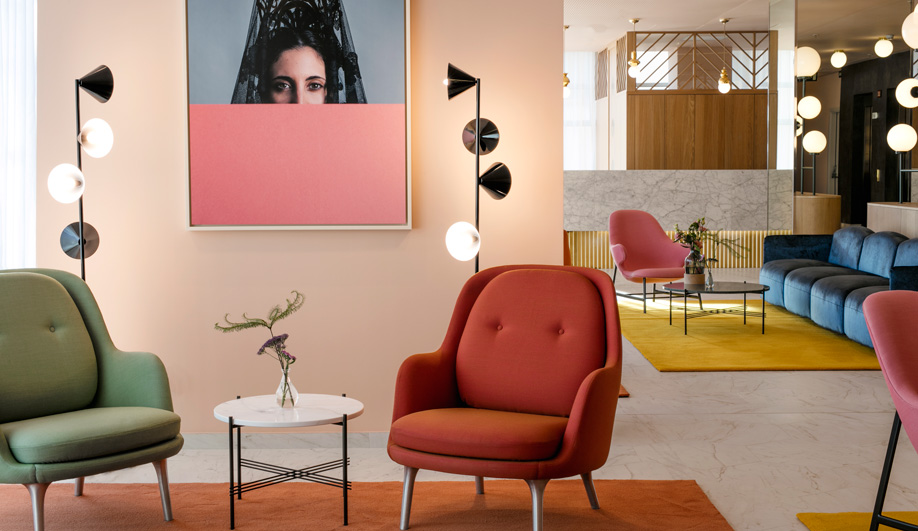 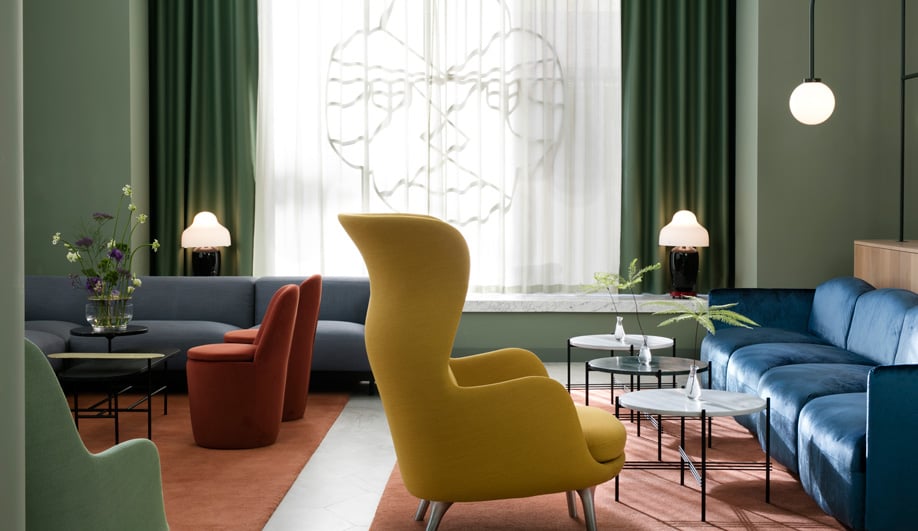 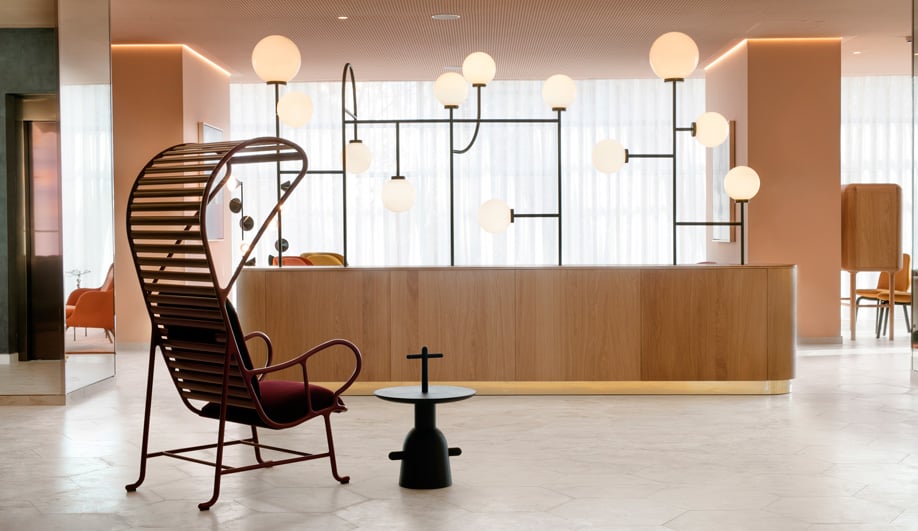 If “Spanish” doesn’t strike you as a promising theme for a Madrid hotel, design superstar Jaime Hayon has placed a 2.8-metre-tall zebra-striped bear at the entrance of the Barceló Torre de Madrid that’s just waiting to doff its top hat and change your mind. The fibreglass-and-brass sculpture, which plays with the image of the city’s coat of arms, sets the tone for a whimsically patriotic travel experience – a kitschy-but-not-too-kitschy love letter to the past and present of this grand, seductive city.

“It seems to me Spaniards are somehow afraid of their own identity,” Hayon tells me as we sit in a café after visiting the opening of the Norman Foster Foundation’s new Madrid headquarters. “I wanted to change that by adding quality to local character and giving it a twist.” 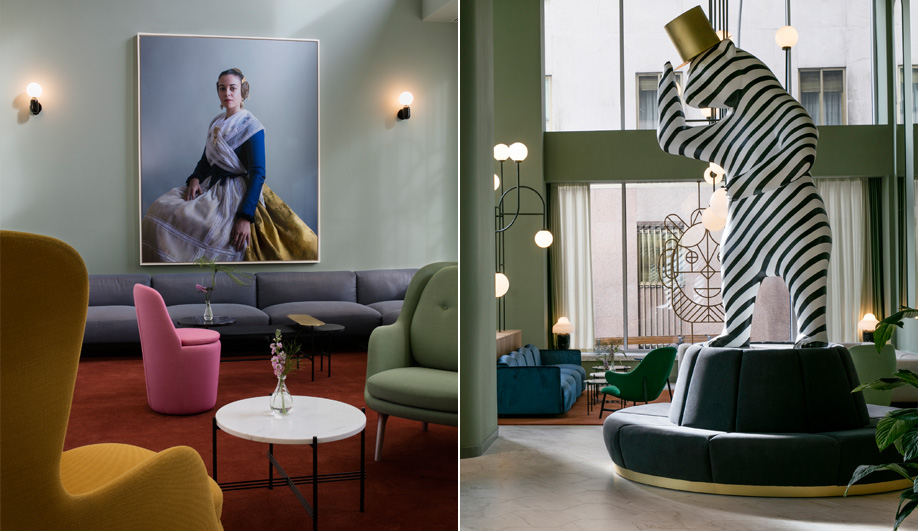 Left: Photographs by KlunderBie give a modern twist to Spanish traditions. Ro and Fri armchairs by Fritz Hansen, Claudine sofa by Arflex. Right: A larger-than-life bear in the lobby is a Hayon special.

The 36-storey Torre de Madrid, itself an icon of the downtown skyline since 1957, is an ideal canvas for such an excursion into local identity. Designed by brothers Julián and José María Otamendi Machimbarrena, the building was once thought to be the tallest concrete structure in the world. Hayon furnished the 258-room hotel – a new project from the Barceló chain, occupying the building’s first nine floors – mainly with the furniture pieces and oddities that he is known for, from monkey-shaped side tables by BD Barcelona to glass-blown-orb wall and ceiling pendants from Bosa and Parachilna.

The result is a charming, lighthearted adventure in a grownup’s playground. He took the Spanish theme further by commissioning art-and-fashion photography studio KlunderBie to bring new life to such time-worn clichés as flamenco shoes and matadors’ hats. This suite of colourful photographs now graces the walls of the lobby and most of the rooms. 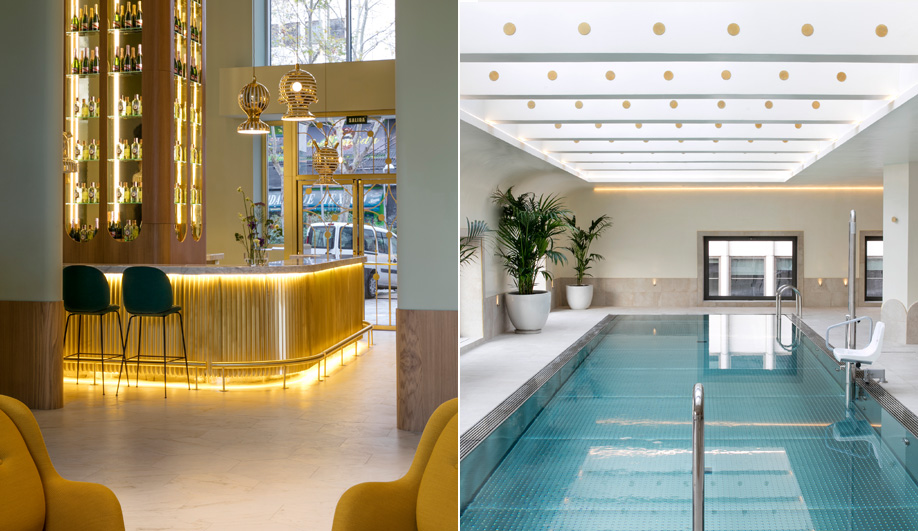 Left: Beetle stools by Gubi line up along the Garra Bar. Right: The wellness area is a tranquil respite.

Just past the zebra-bear is the Garra Bar. Its six-metre-high ceilings, adorned with golden-glazed ceramics, are impressive enough, but Hayon multiplies the effect with mirrors above the bar counter, creating a grand bottle-filled illusion that stretches endlessly upward. Windows with abstract cartoon faces rendered in brass look out to the bustling street outside. Another dominant feature of the lobby and bar is the imposing arches, which Hayon says are a nod to the Roman aqueducts that still stand in nearby Segovia, though his version has a little surrealist twist. The wellness area and indoor swimming pool, which is an elegant, muted tribute to a Viennese bathhouse, similarly hints at a grand history. 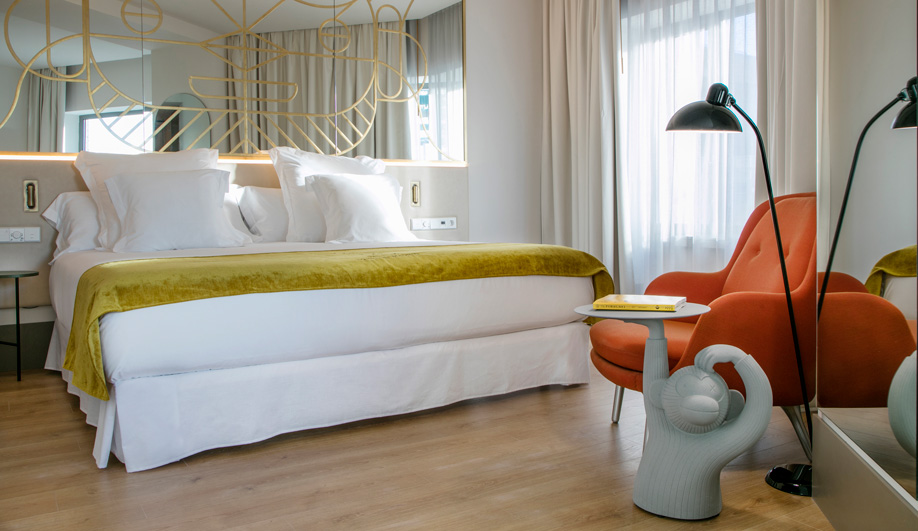 The suites feature panoramic views over the Gran Via, and furniture by Fritz Hansen and &tradition alongside a number of pieces by Hayon himself, such as the desk and the brass reading light. Brass is a constant presence throughout the building; above the bed is a mirror featuring one of the same brass faces that appear on the exterior windows.

Even though the hotel is saturated with colour, patterns and contrasting textures that recall Spain’s North African and Arabic heritage, Hayon claims the project was for him a challenge in design restraint. 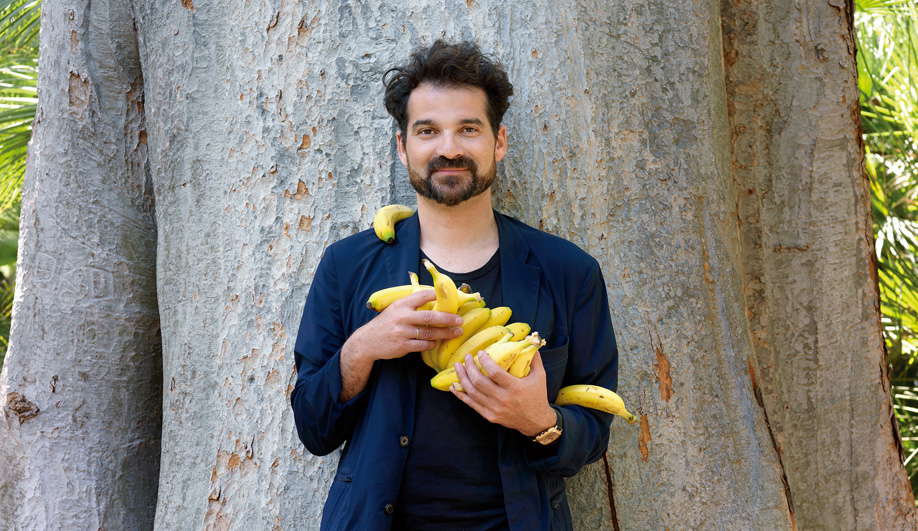 “To me it was important to move away from excess decoration,” he says. “I tried to be restrained playing with texture, colour and small details. Many defend the lack of real design in a space by filling it up with patterns, and I refused to do that. My mantra was to make less”.

If this sounds surprising to fans of a man who can occasionally be spotted walking around in a pink bunny suit, they need not worry. From the zebra-bear on in, this is a landmark hotel as nobody but Hayon could have conceived it. 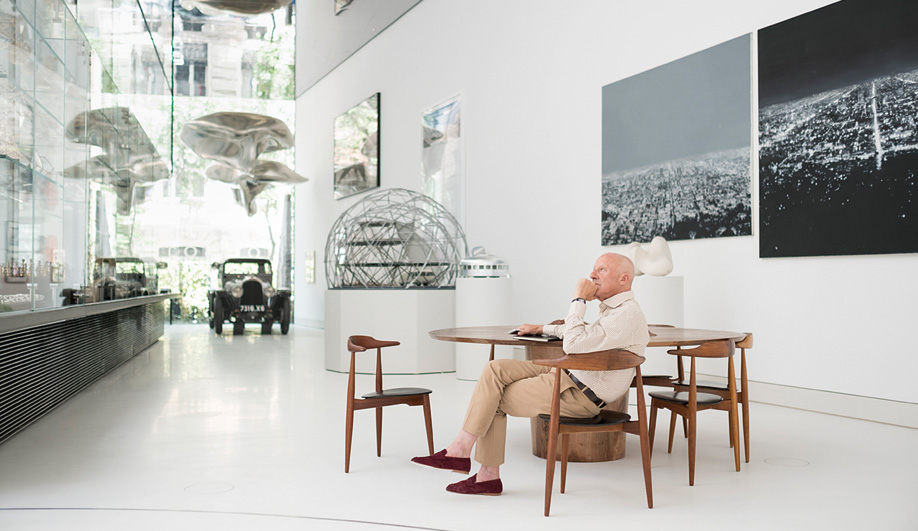 After years of planning, the Norman Foster Foundation has finally opened

Housed in a heritage-listed palace originally built in 1912, the Norman Foster Foundation is a compelling mix of old and future. At its core is a glass pavilion (designed by Foster, of course) that functions as a stage for events and a space for displays. The foundation itself houses an impressive archive of some 74,000 drawings, models, photographs, sketchbooks, and assorted objects, all revolving around Sir Norman Foster’s life, work and ideologies.

The British architect, who is now 82, has always been at the cutting edge of innovation and technology, masterminding the newly opened US$5-billion Apple campus in Cupertino, California, and building robots that can 3-D-print houses on Mars. This centre is a boon for young academic and professional minds; providing a communal hub for the next generation to envision the future. The rest of us are welcome to tour the foundation by appointment.