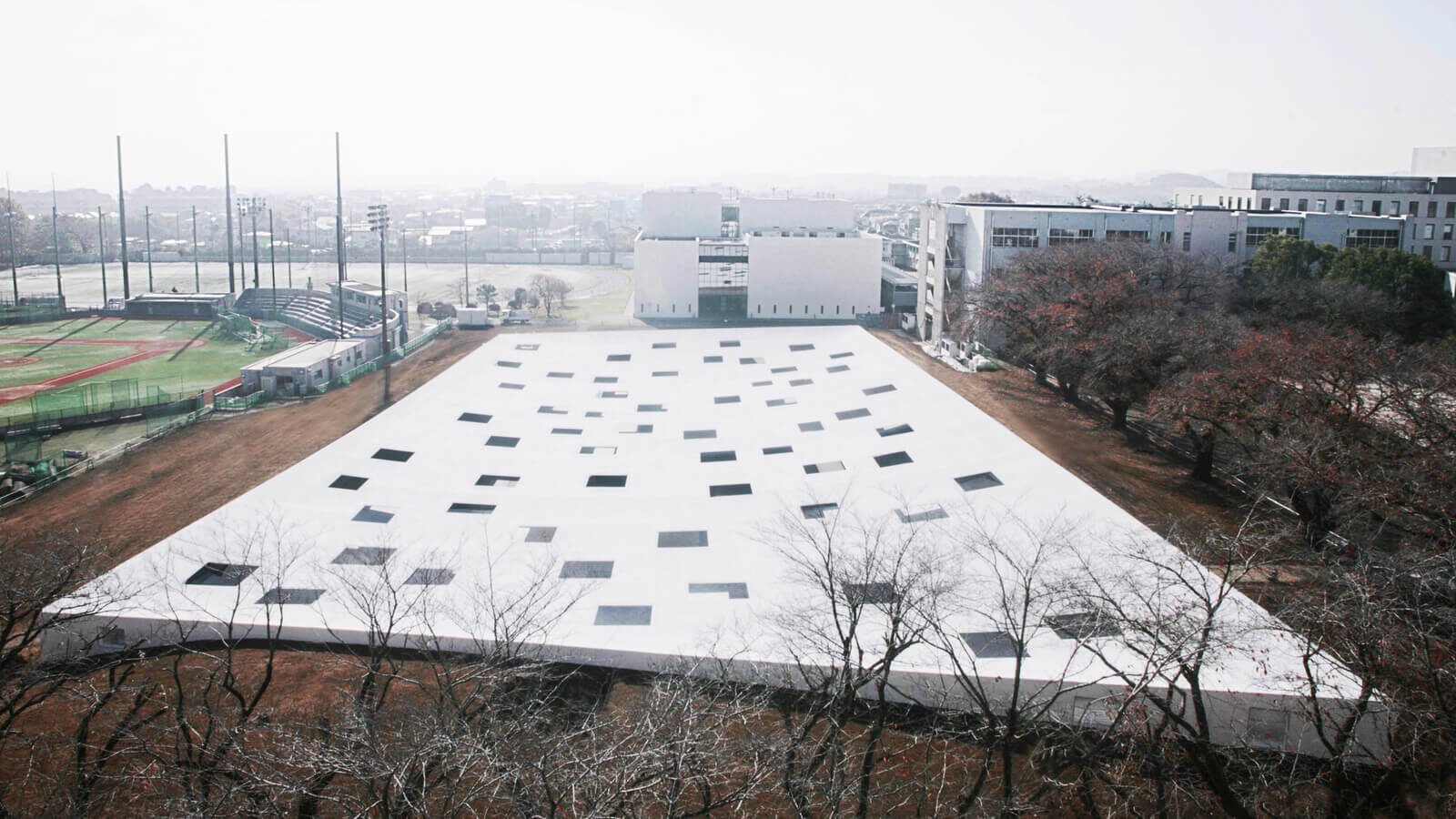 Over a decade in the making, the new structure provides semi-outdoor space for students at the engineering school in Atsugi, Japan.

More often than not, Junya Ishigami’s creations stray from the narrow confines of what we expect architecture to be. His meticulously detailed drawings convey fantastical ideas and his mock-ups dispense ethereal qualities. The Japanese architect’s latest work is no exception. 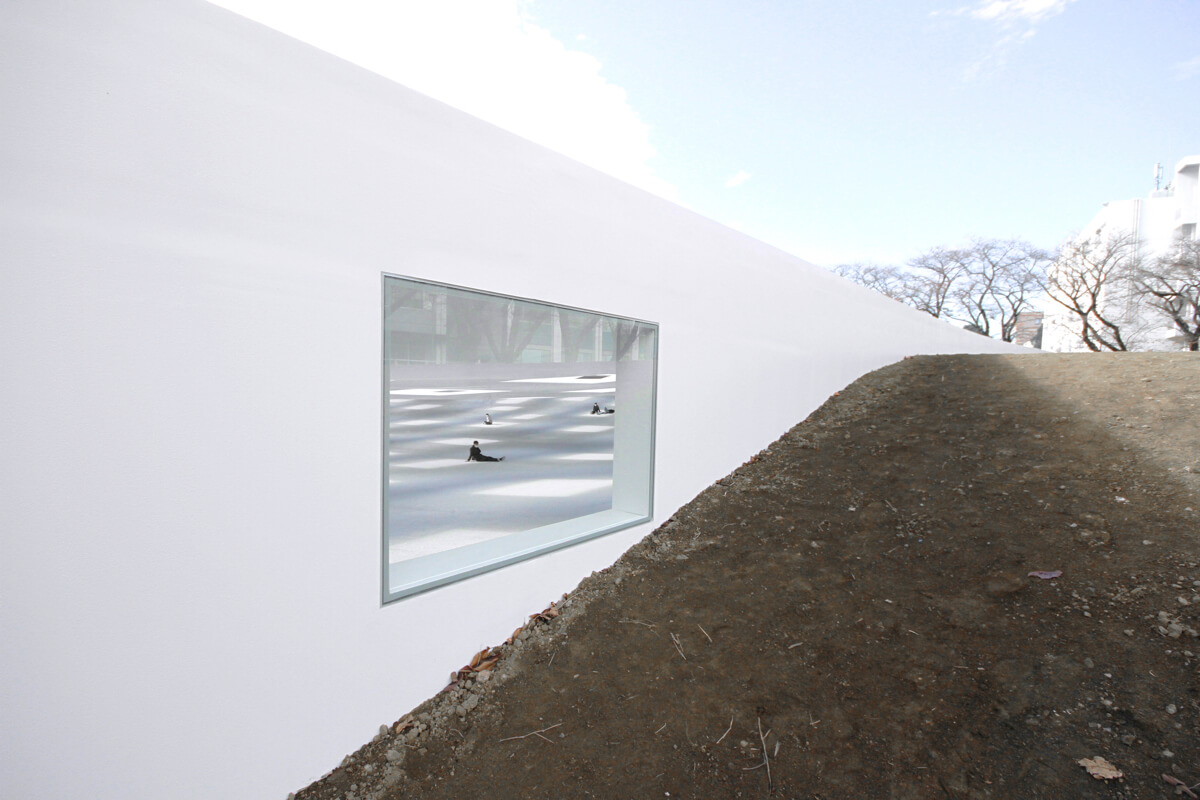 While the movement of the sun creates distinct territories within, glazed openings on the 25-centimetre-thick load-bearing walls connect to the surrounding university.

In 2008, Ishigami completed his first built project — the KAIT Workshop — set on the campus of the Kanagawa Institute of Technology in Atsugi. When the career-making structure debuted, so too did a model of another project for the institution. What was then only an idea has now been fully realized, some 13 years later, with the completion of the multi-purpose plaza at the university for engineering and science just outside of Tokyo. Despite the intervening years, his vision has remained intact: a sprawling edifice capped by what appears to be a single sheet of metal — in reality, it’s made up of 331 steel panels welded together — suspended between four perimeter walls. 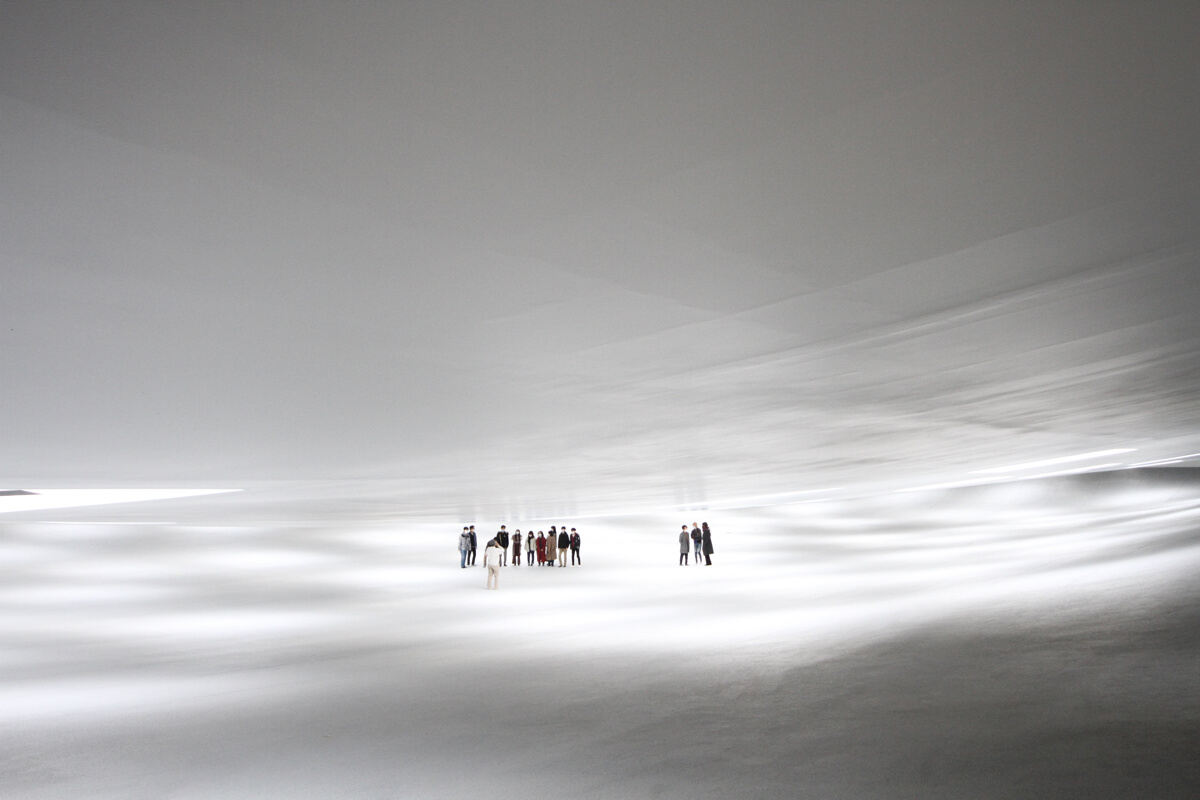 An assemblage of 331 steel plates forms the structure’s bowed canopy. Fifty-nine pores in its roof frame the sky above, as well as the “cherry blossom trees nearby,” according to the architect.

Occupying a site immediately adjacent to the workshop, the finished plaza is spacious; its more than 4,100-square-metre floor area could easily accommodate nine basketball courts. Punctured with 59 holes, the roof appears to sink under its own weight in the middle. To create the single surface, 12-millimetre-thick steel panels were welded together on site not once but twice: first via an automated process, then by hand (scaffoldings were used to achieve the intended shape prior to welding). Steel piles that run along the edge of the ceiling to reduce its tensile load and ribs that function as a compression ring were then secured to four perimeter walls also clad in white steel. These are in turn supported by massive concrete foundations and 54 earth anchors that burrow almost 20 metres into the ground. “The structure,” Ishigami explains, “resembles a suspension bridge rotated.” This mind-boggling engineering feat enables a column-free hall with a span of nearly 90 metres. 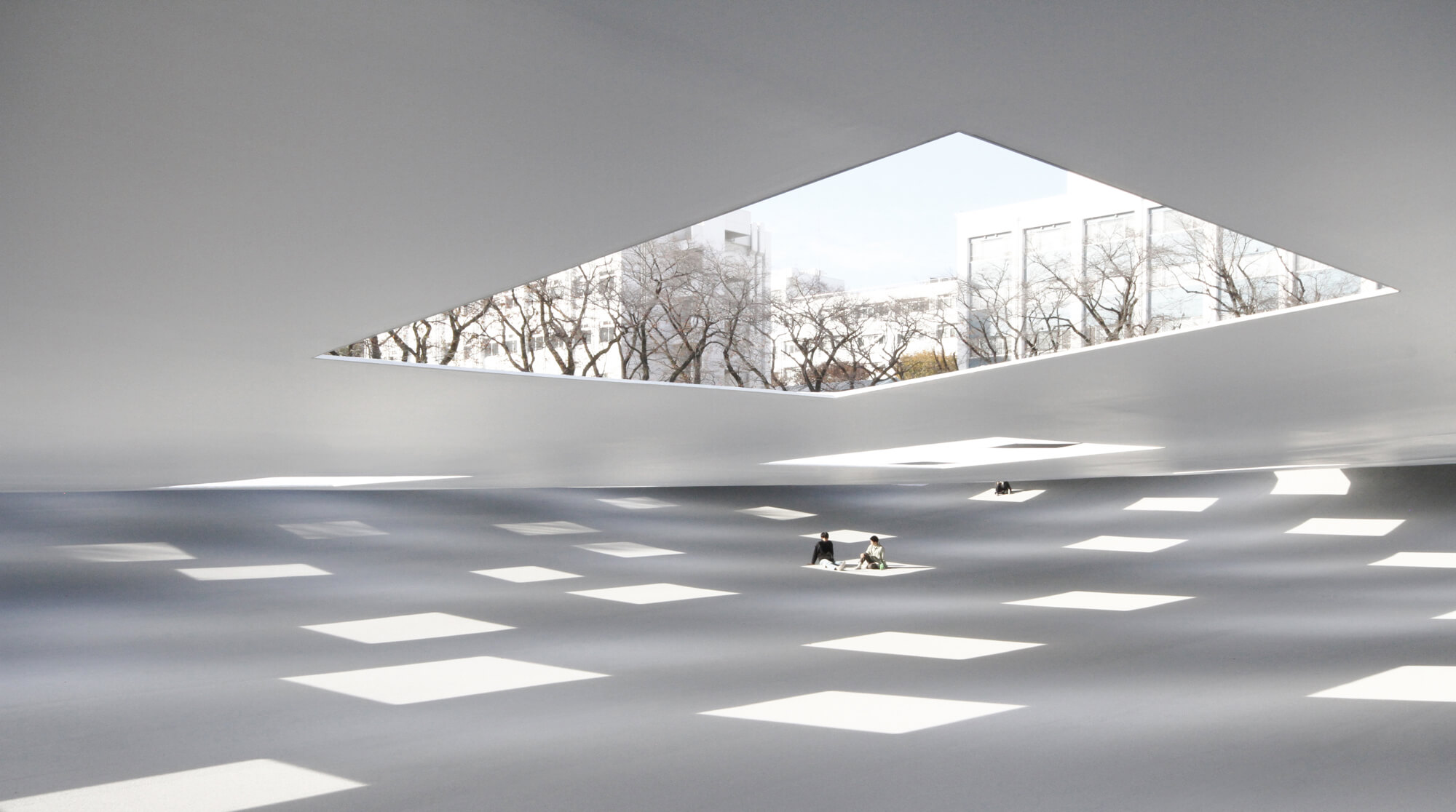 Set into a site on the Kanagawa Institute of Technology’s campus, the public plaza employs an innovative structural design to offer students some much-needed gathering space.

The architect’s main goal, however, was to create “a semi-outdoor space” for students. Set at heights between 2.2 and 2.8 metres, the ceiling is intentionally low-slung to “evoke the scale of a house” as a composition of apertures at various sizes exposes the entire interior to the elements. The floor slopes down toward the middle, mirroring the dip of the “sky-like ceiling.” It’s laid with permeable asphalt so that rainwater can be quickly absorbed, remaining “pleasant to the touch” and encouraging visitors to relax on the incline. Though the entrances are kept open, glazing was introduced to buffer the plaza from prevailing winds. 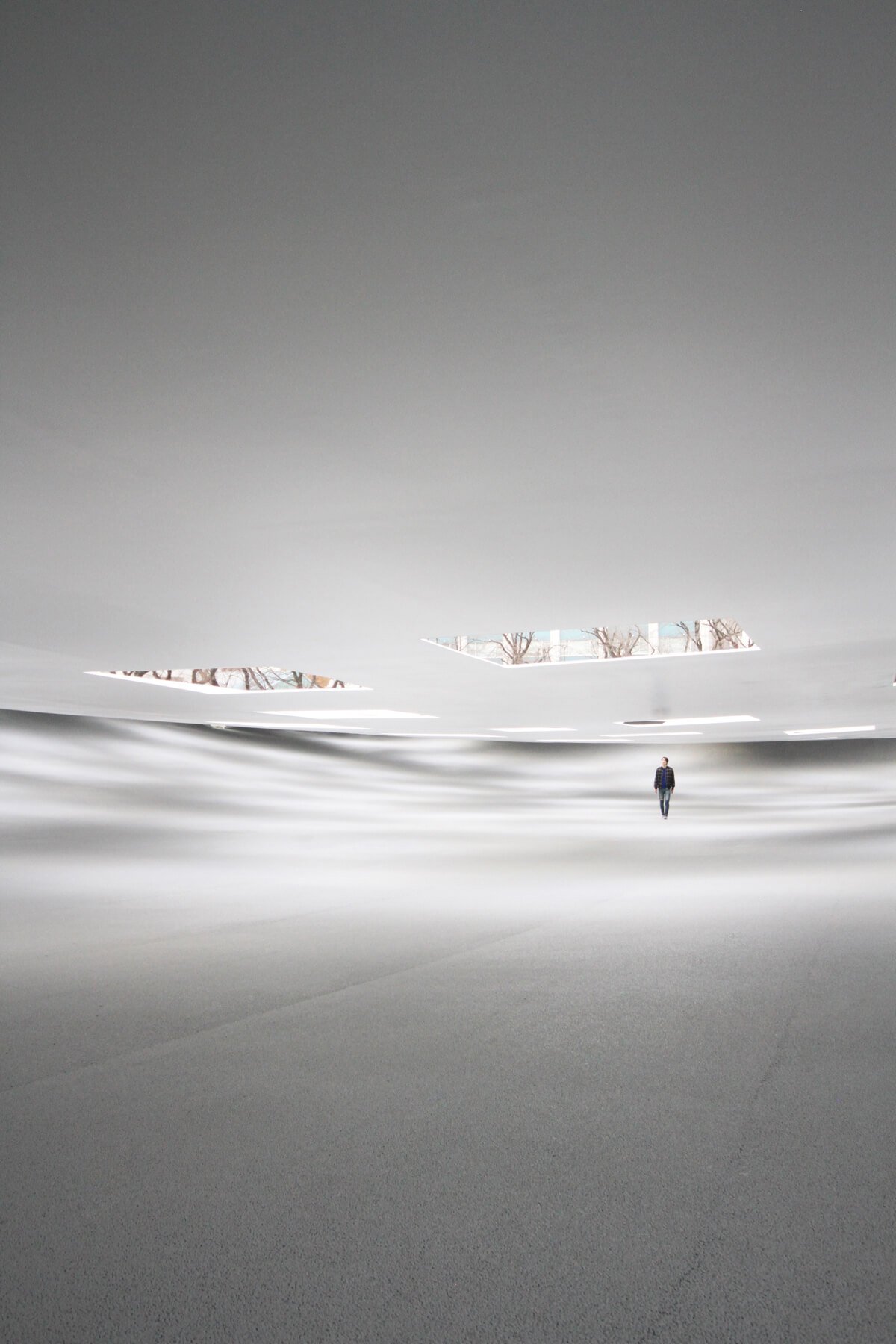 The plaza’s floors are comprised of permeable asphalt to absorb the rain water entering the structure from the openings above.

Due to this low roofline and stark incline, the space cannot be viewed in its entirety. “What you see,” the architect says, “is the sky above and the branches of the cherry blossom trees nearby.” The only contextual reference Ishigami seems to make is to his own work next door. The plaza is the “yin” to the “yang” of the KAIT Workshop, open and transparent with hundreds of slender steel columns holding up the roof.

Contrarily, the new building is entirely empty, almost cavelike. The space is more a setting for introspection, as the wider world is only “hinted at” through the gaps. On a sunny day, it moves in tandem with the sky above, the dramatic interplay of light and shadow carving “rooms” along the floor. If the original workshop was a groundbreaker, the new public plaza could be more aptly described as a ground-shifter.

Over a decade in the making, the new structure provides semi-outdoor space for students at the engineering school in Atsugi, Japan.