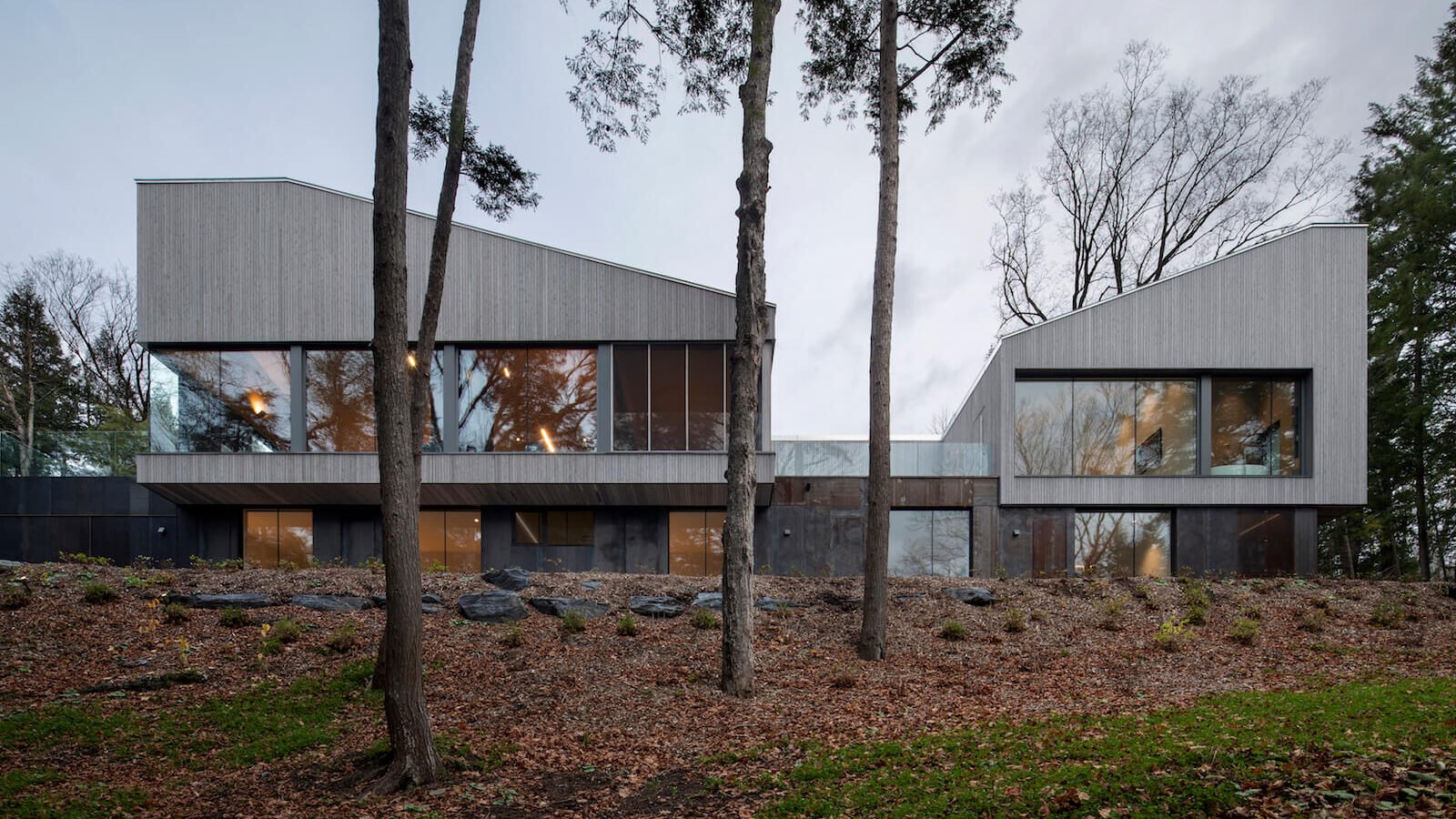 When “Let there be light” landed on the drafting table as a client request (rather than a celestial order), Naturehumaine responded to the challenge with an intelligent design. To come up with the creation story for an illuminated single-family house on a densely treed lot in Quebec’s Eastern Townships, the architects looked up for inspiration. That’s partly because the building site, a steep property on the shore of Lake Memphrémagog, presented its own obstacle. “There was only one place on the lot suitable for the house,” says Stéphane Rasselet, principal of the Montreal-based firm. “The rest of the site slopes abruptly down to the lake.”

As a result, the house is oriented toward the west, where direct light is restricted to the afternoon hours. To coax it indoors throughout the day, the firm took a cue from church architecture, particularly the nearby Abbey of Saint-Benoît-du-Lac, expanded in 1994 by Dan Hanganu Architectes. “Inspired by Hanganu’s funnelling of light, we incorporated light wells in the roof,” says Fanny Guigon, the co-lead on the project. “There are three of these, each atop a double-height space below.” 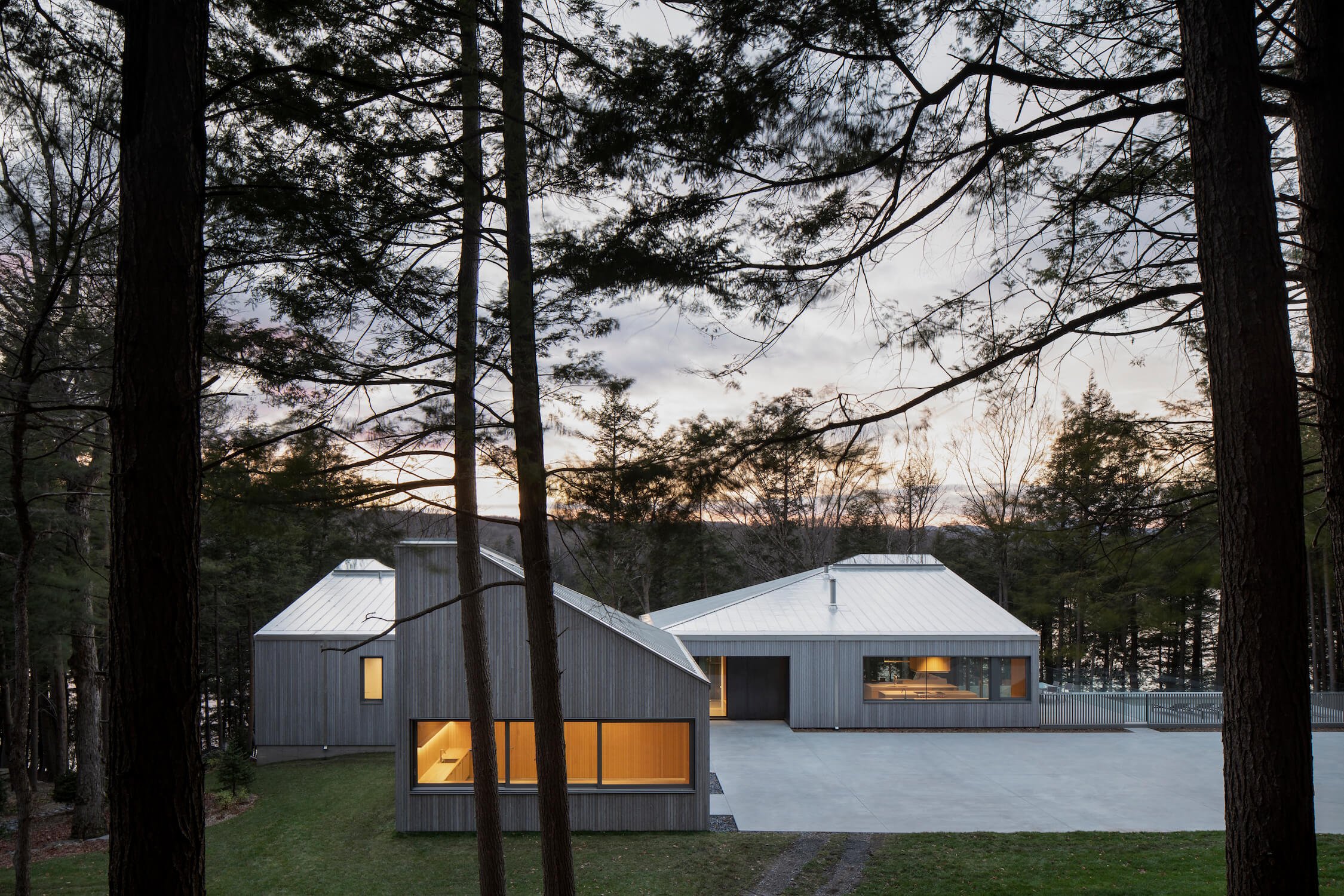 A view of the east-facing side of the skylight-capped lake house, which features aged cedar siding and stainless-steel roofing.

While the concept emerged from looking up, the first impression of the house as you make your way down to it via a sloping road is more like a bird’s-eye view. On arrival, you’re greeted by a geometric ensemble, the trio of polygonal vertical shafts articulated into a three-volume structure that invites movement and exploration by its occupants. Set at different angles, the multiplanar roof mimics the terrain, its summits and valleys recalling this hilly fringe of the Appalachian Mountains and its stainless-steel folds, like those of a paper fortune teller, helping to bring in more radiance.

Conceived as a gathering place for a family and their friends, the house splits from a central node into three volumes: a public sphere containing the kitchen, dining room and living room; a private nook with bedrooms and bathrooms; and a combo workshop and garage. Unlike the public-facing spaces and the sleeping quarters, which overlook the lake, the workshop gives onto the forest to enhance concentration. “Structurally, it’s comparable to creating a small institution,” says Rasselet in reference to the entirety of the 790-square-metre project. The three-in-one solution breaks up the footprint into more intimate areas. 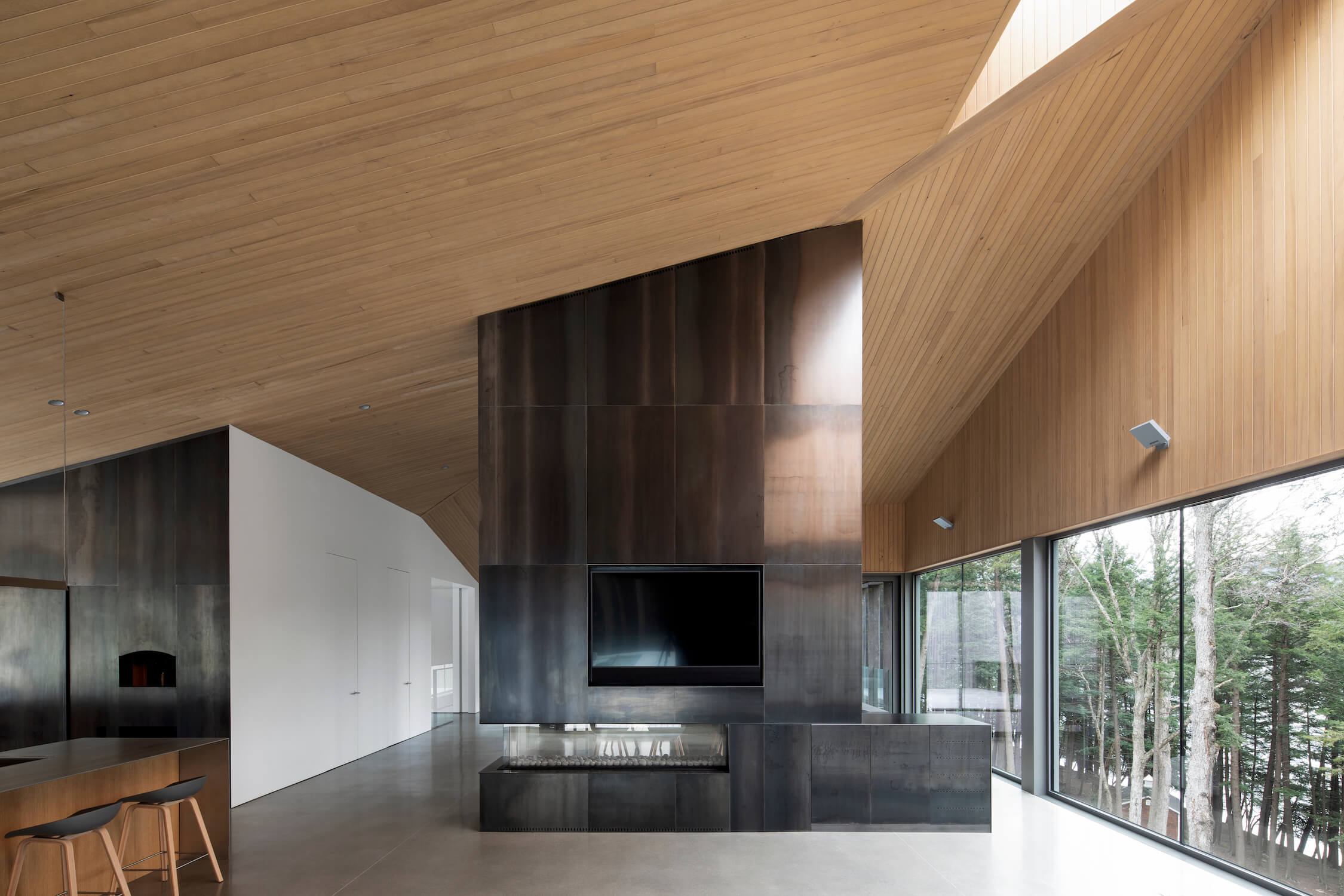 The architects suspended a Corten-clad fireplace from the angular ceiling, whose folds reflect the multiplanar roof.

Part of the house sits below grade. Recessed into the slope, the guest rooms, accessed via a staircase in the central junction, open onto a terrace facing the lake. Here, the above-grade facade is clad in Corten steel; untreated at the time of installation, it will gradually take on the hues of the forest. “By blending in with the hemlocks and firs, the house seems to float above the forest floor,” says Guigon. The architects saved every possible tree during site preparation and, as a result, the house is barely visible from the lake, the woods creating a natural filter. And while part of the house melds with nature, part of it stands out from it. The contrasting aged red cedar panelling on the upper portion of the exterior reflects a soft glow into the understorey, while the stainless-steel roof recalls an overcast sky. 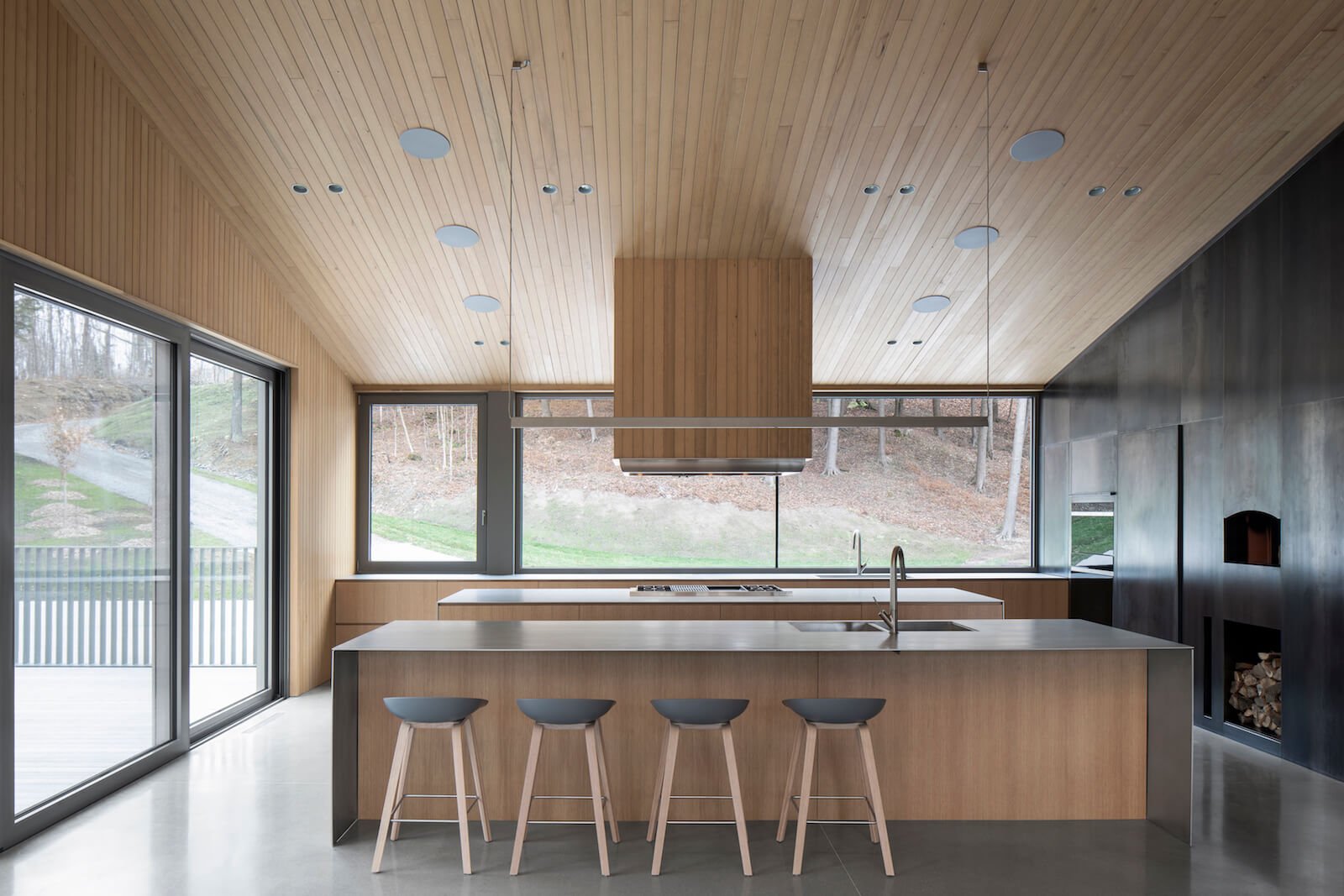 Inside, the roof’s diagonal ridges translate into a dynamic, faceted ceiling — a geometric assembly that brings the scale down to human proportions, with every angle imbuing the interior with surprising character. For the main communal space, the family wanted a hearth to gather around, figuratively and literally. But instead of your average fireplace, the design team custom-made a dramatically suspended Corten steel–clad monolith. “It was a challenge because it was so heavy,” says Guigon. “We had to reinforce the ceiling.”

The advantage is that you can enjoy a fireside glass of wine in any of three different locations: the kitchen, the dining room or the living room. The kitchen also features a built-in wood-burning pizza oven, encouraging interactivity even on rainy days or following a few hours on the lake or snowboarding down the grove. To boost the warm, friendly vibe, the architects dressed the ceiling and light wells in oiled yellow cedar. Oak-veneer cabinetry contrasts with the brushed stainless-steel countertops, while the polished concrete floors are warm underfoot thanks to geothermal heating. 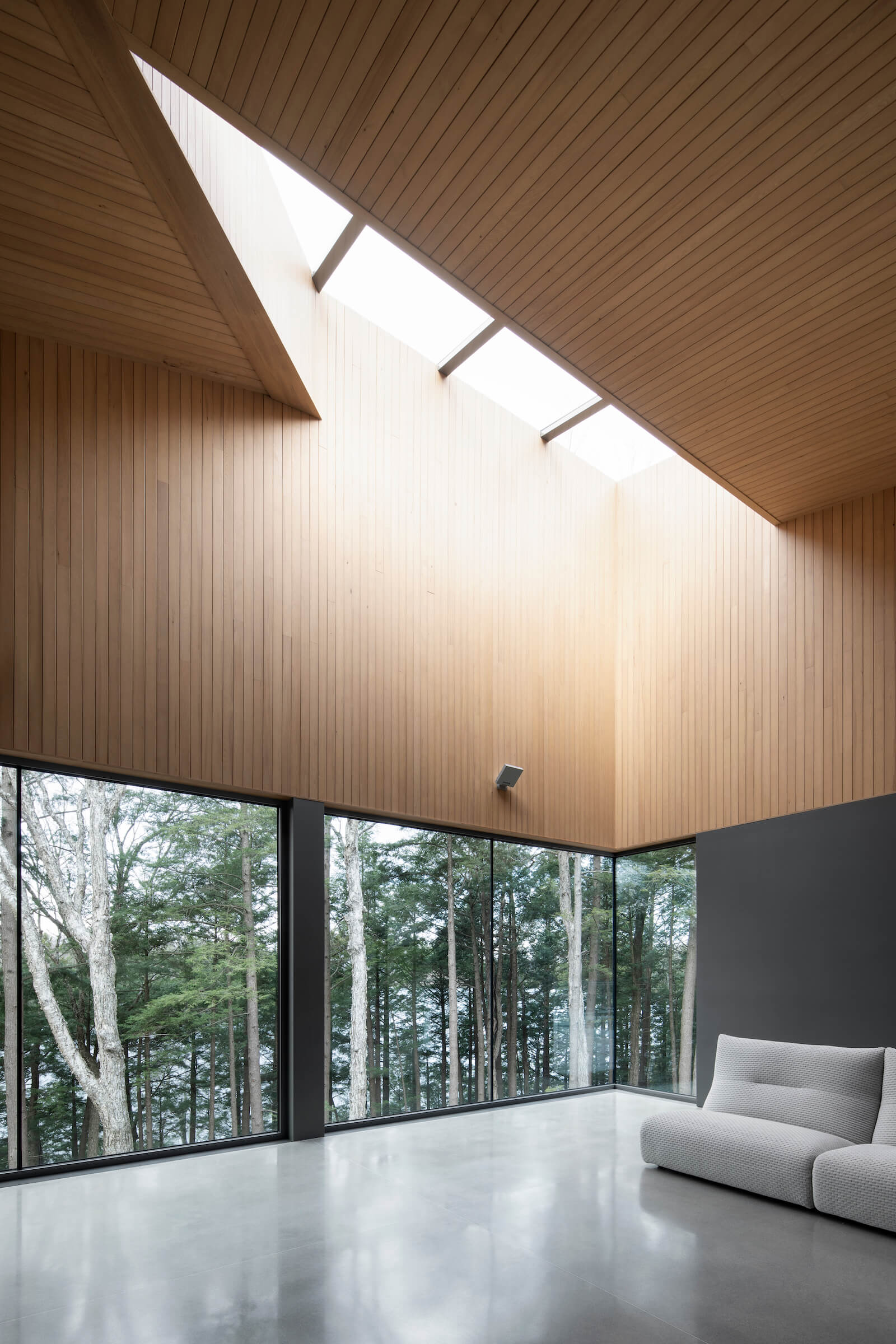 The ceiling’s unique geometries imbue each space, from the living area to the bathroom, with a strong character. 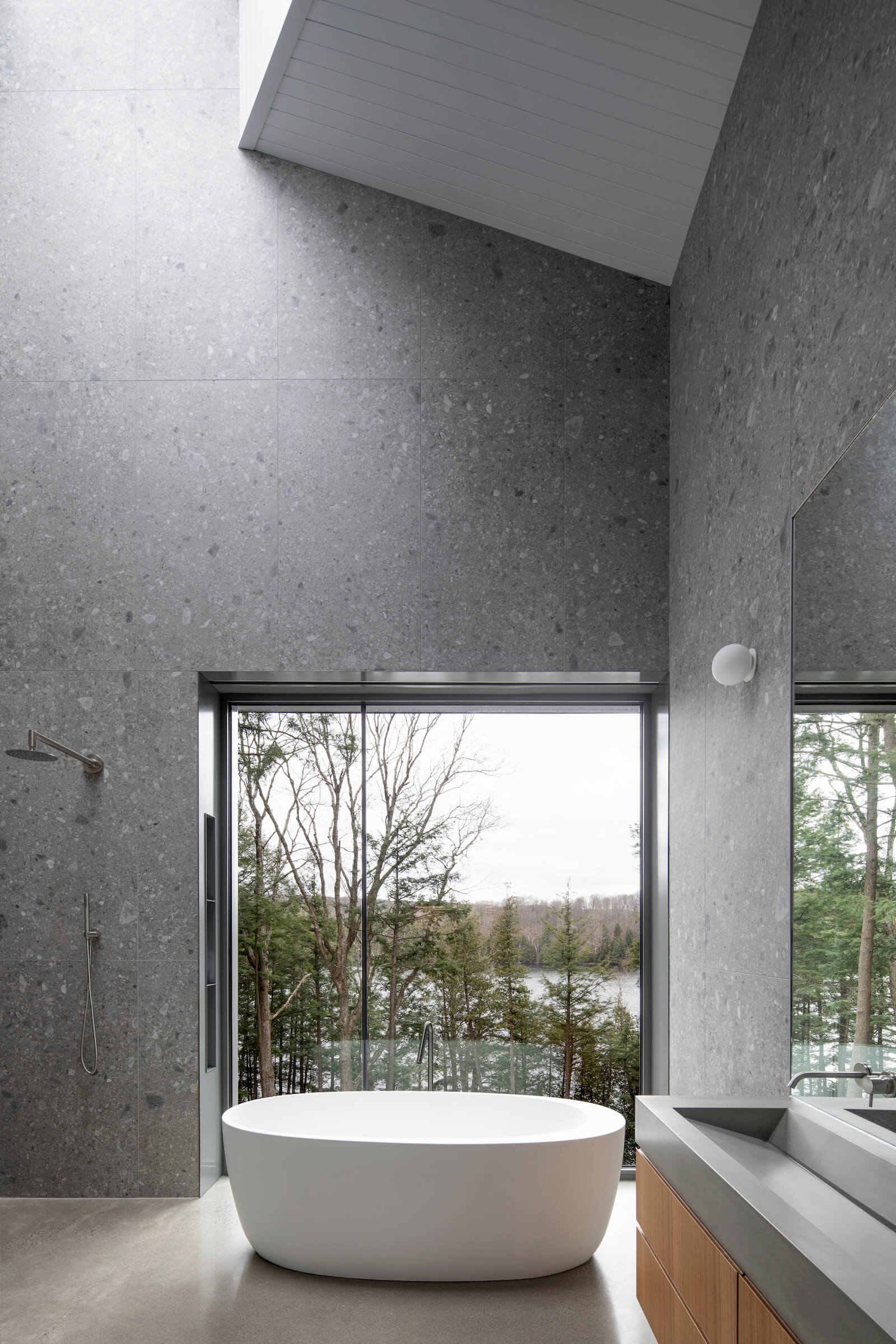 The windows throughout are by Alumilex.

The physical distancing imposed under the pandemic has delayed the home’s intended use as a retreat for hosting friends. Instead, the owners have made the lake house their primary residence; away from the city and its lockdowns, it’s a calm and luminous bubble. To this effect, the abbey influence seems to have brought another blessing: the hushed material palette provides a serene backdrop that doesn’t distract from contemplation, nor does it get in the way of conversation. 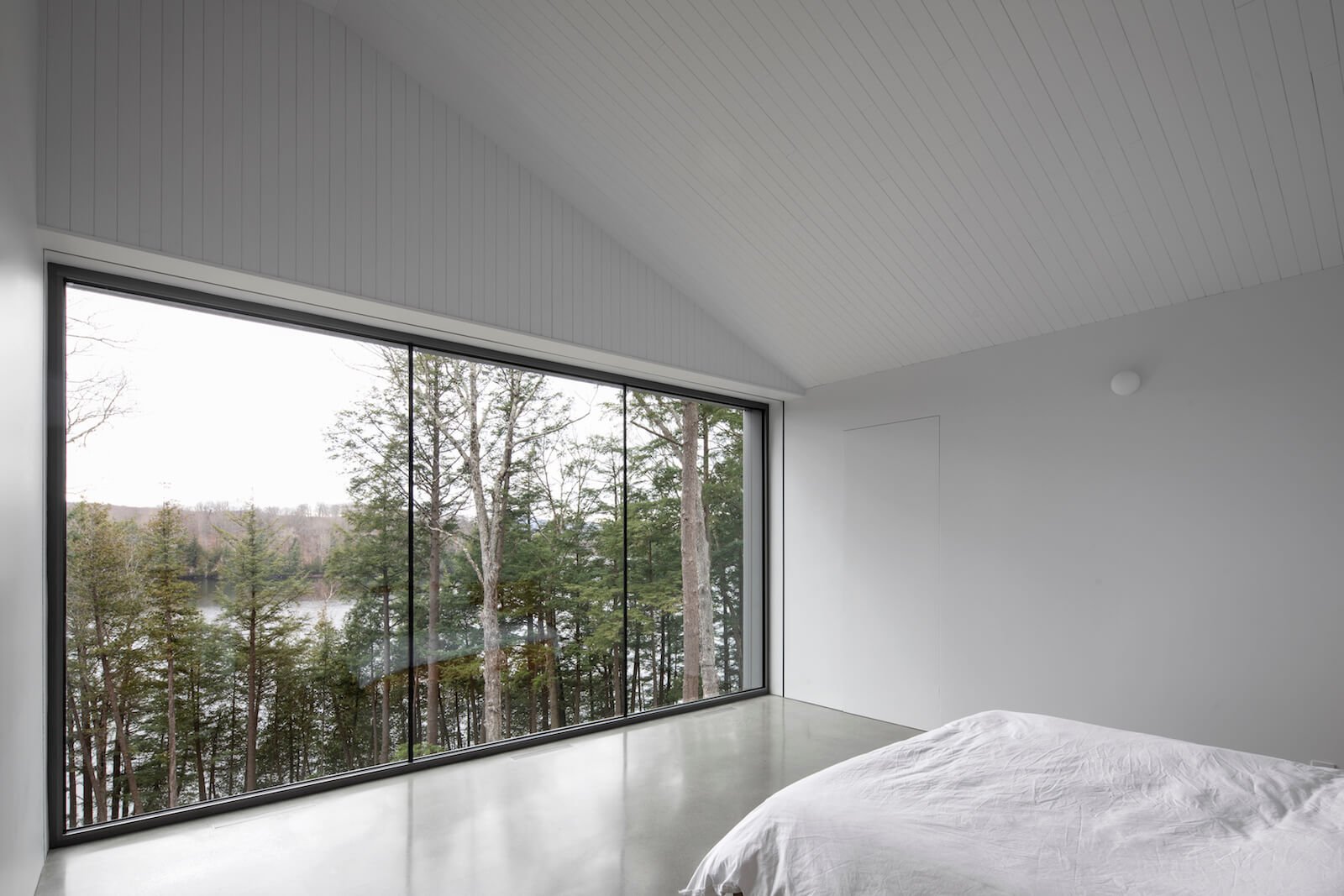 The sleeping quarters overlook the lake, bringing in the wooded surroundings’ calm vista through wall-to-wall glazing.

It’s more like a clean slate for elevating new friendships or strengthening existing ones — for layering pizza toppings and laughter. After all, the residence was built to enhance its inhabitants’ connections to one another and to the greater landscape. If, on first impression, Naturehumaine’s calculated experimentation with geometries and volumes offers a map that reveals the clients’ own sense of play and adventure — while adding a new set of contour lines to a rugged site — the lasting impression is that of a sanctuary, a quiet geography of light that links indoors and out, family and friends. 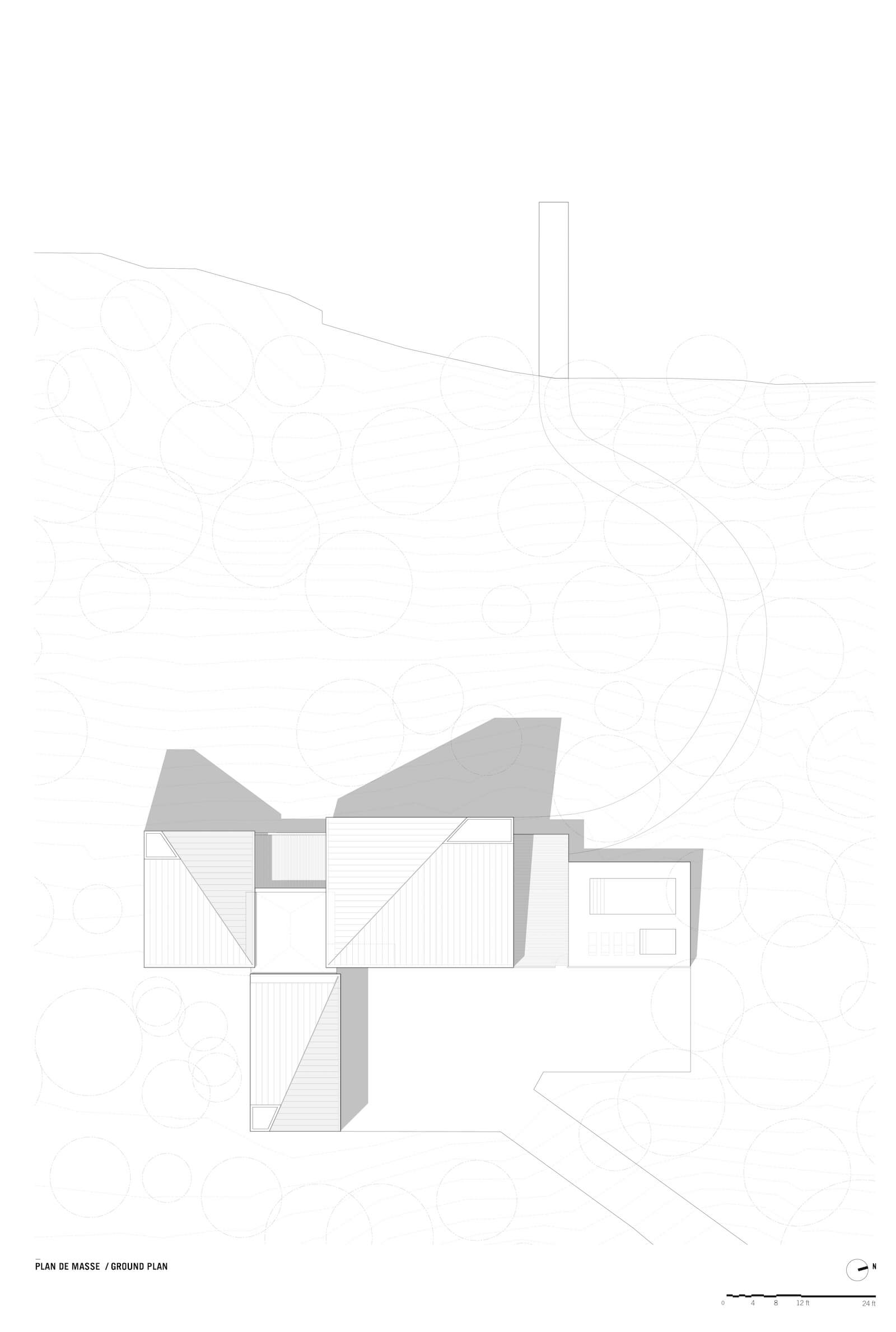 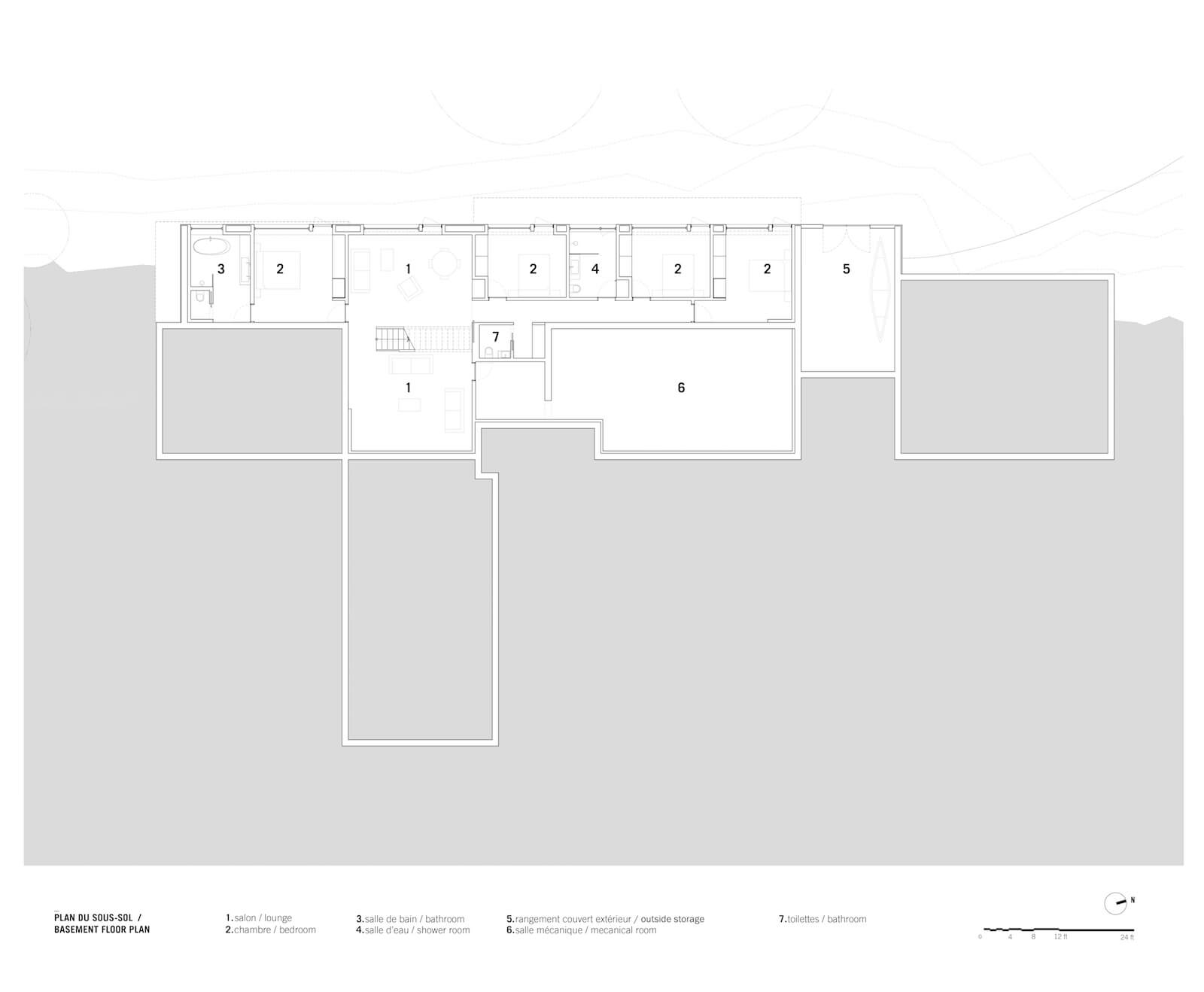 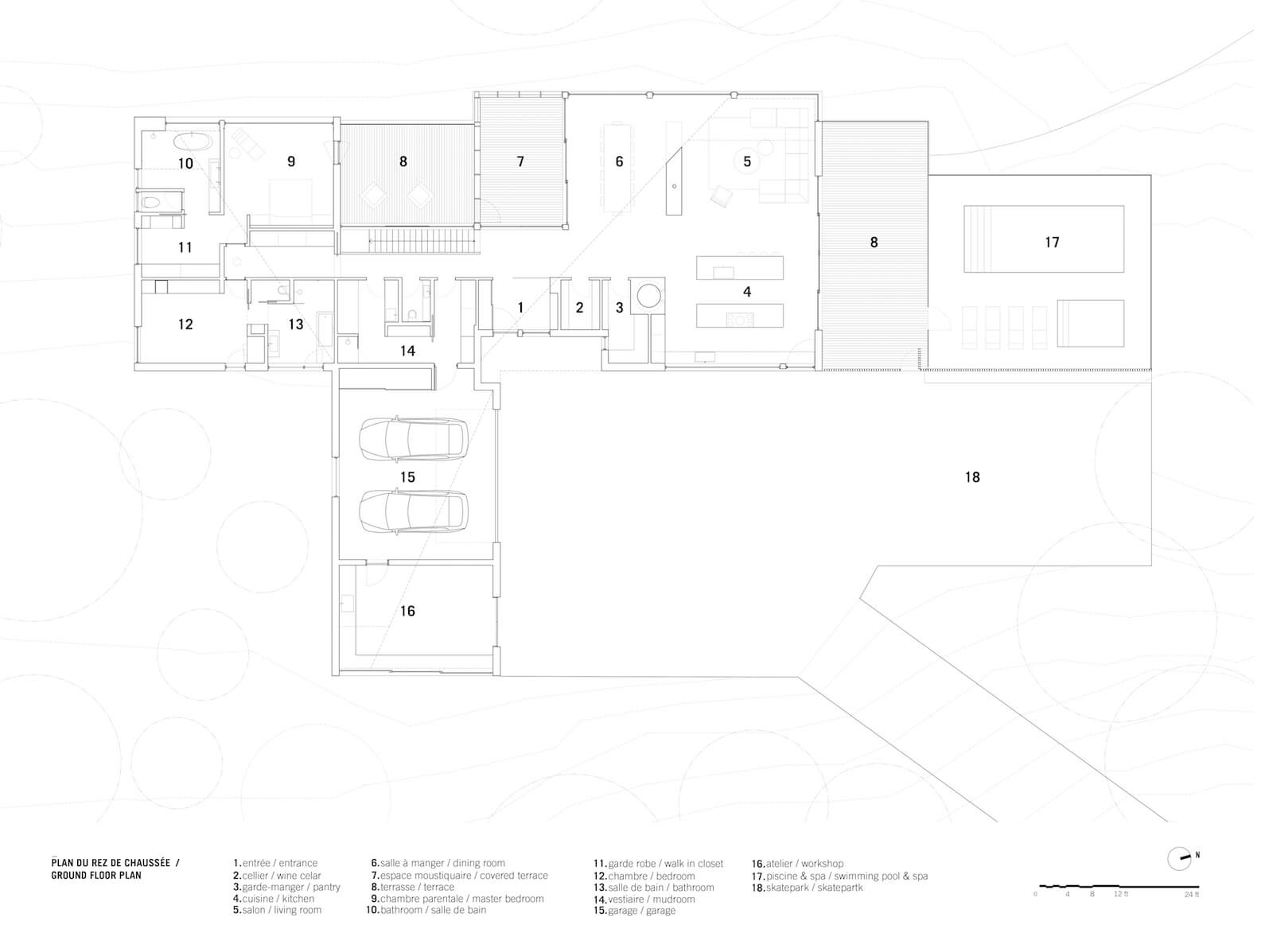