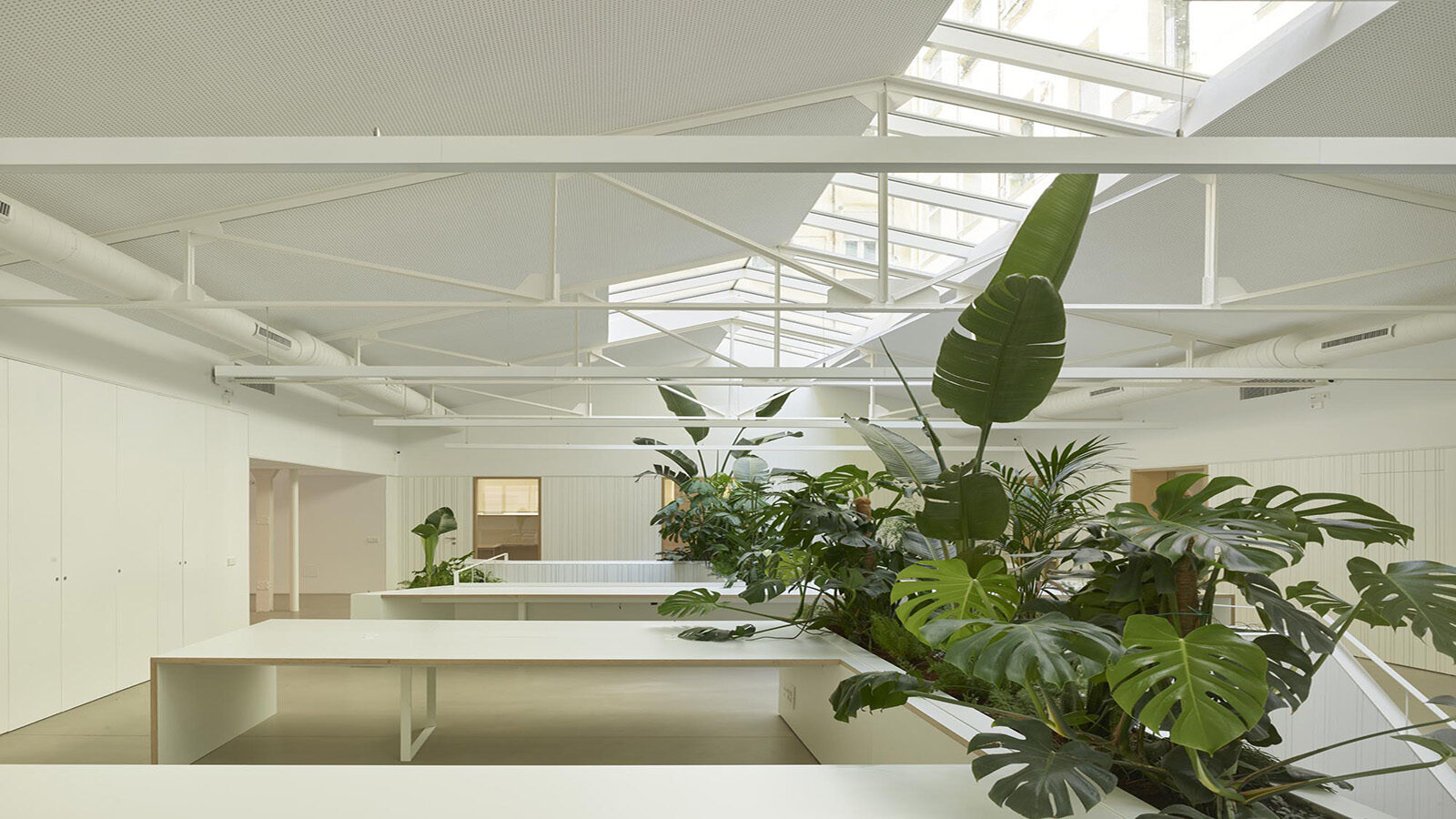 Modern, bright and minimal, all white-interiors have a certain appeal, but they run the risk of feeling overly sterile and uninviting. For a recent office project in Madrid, architects David Casino and Bernardo Angelini, co-founders of local firm Zigzag Arquitectura (ZZA), together with Rodrigo Delso, deftly sidestepped this territory by introducing an exuberant program of green vegetation to create a warm, lively and unexpectedly elegant space. 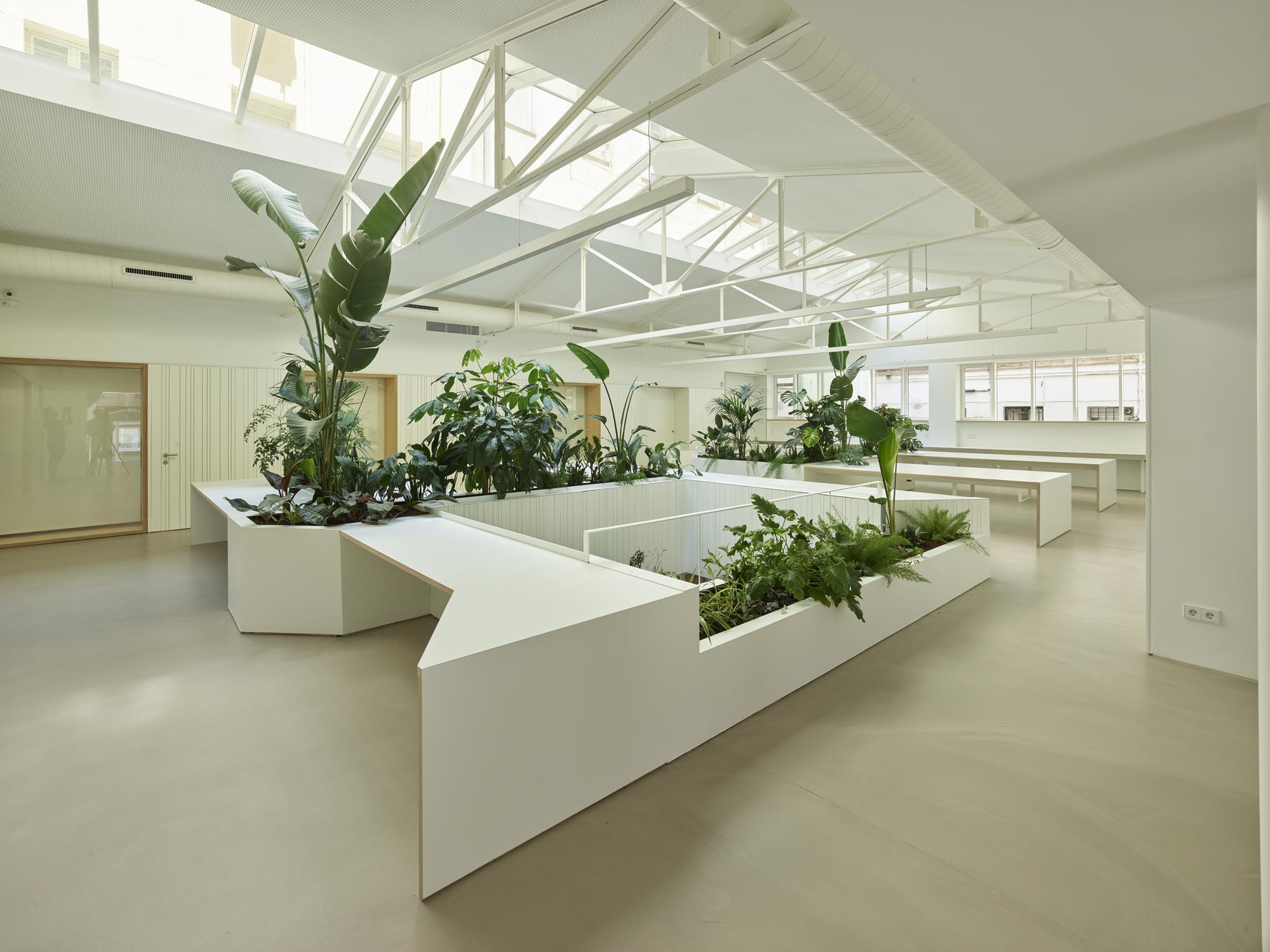 Arranged in an orderly manner, the custom-made furniture incorporates plantings that help to soften and divide the upper level.

Commissioned by Spanish TV production company Catorce Comunicación to help first find and then design its new headquarters, ZZA and Delso came upon an abandoned industrial space sandwiched between two mid-19th century buildings in a mainly residential part of the city. In a previous life, it had been an auto-repair shop, and so was in need of a complete overhaul to make it suitable for human occupation. The architects were given a brief that required creating something singular with unspecified future-use possibilities and a limited budget to make that happen. Their response: use basic, inexpensive materials in a sophisticated way and add an abundance of plants. 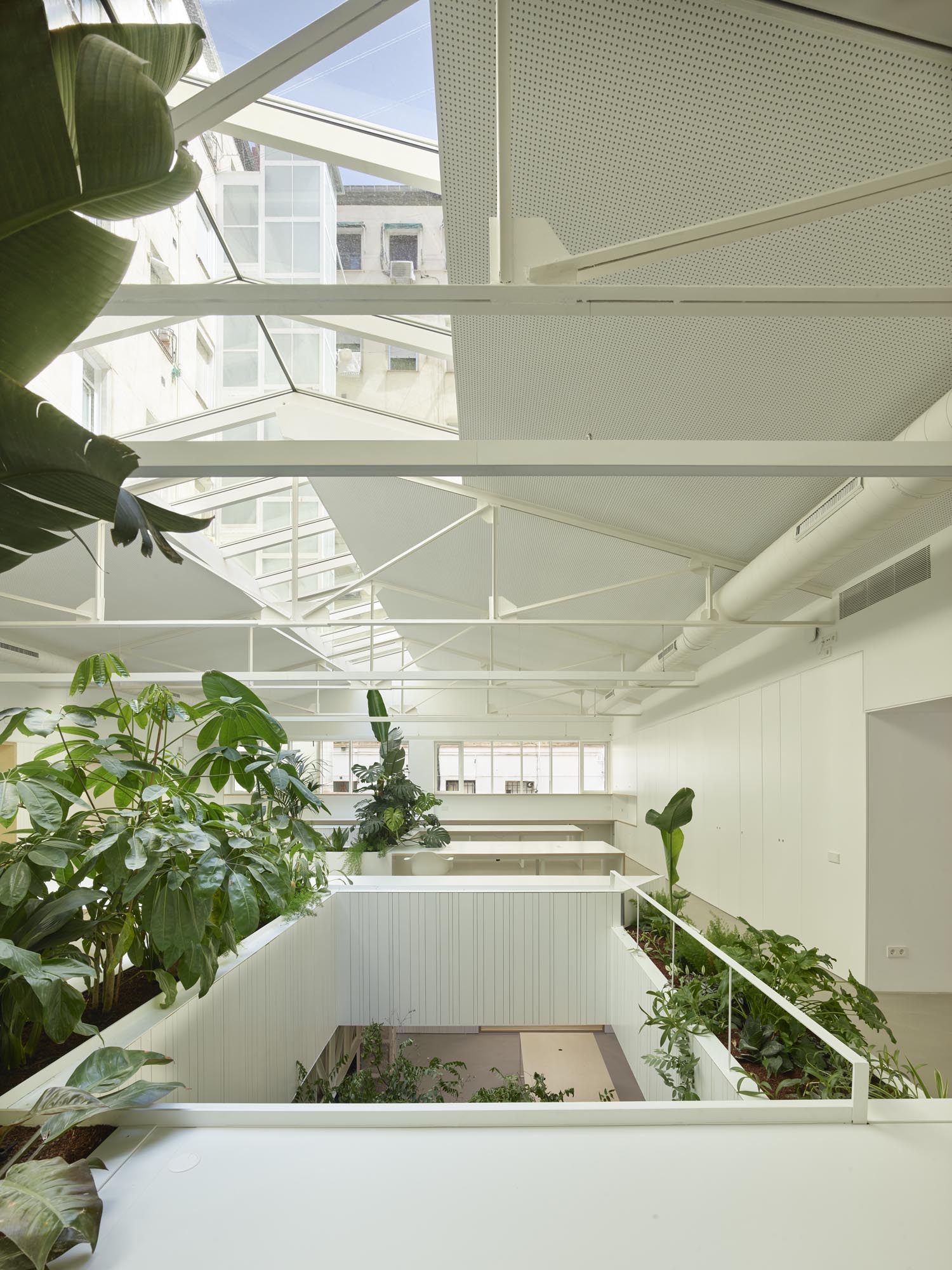 Zigzag Arquitectura and Rodrigo Delso added new skylights to the truss roof, which let light pour down though a central stairwell into the once-dark basement level.

First to be addressed was the main entrance point — a double-wide street-level opening with two car ramps, one leading up 1.4 metres above ground and one descending down into the basement. The upward slope was transformed into an easy-to-climb staircase, while the opposing ramp was divided in half, with shallow stairs on one side and stadium-like steps that can be used as seating during future events on the other. A third internal staircase was built to directly connect the two levels. 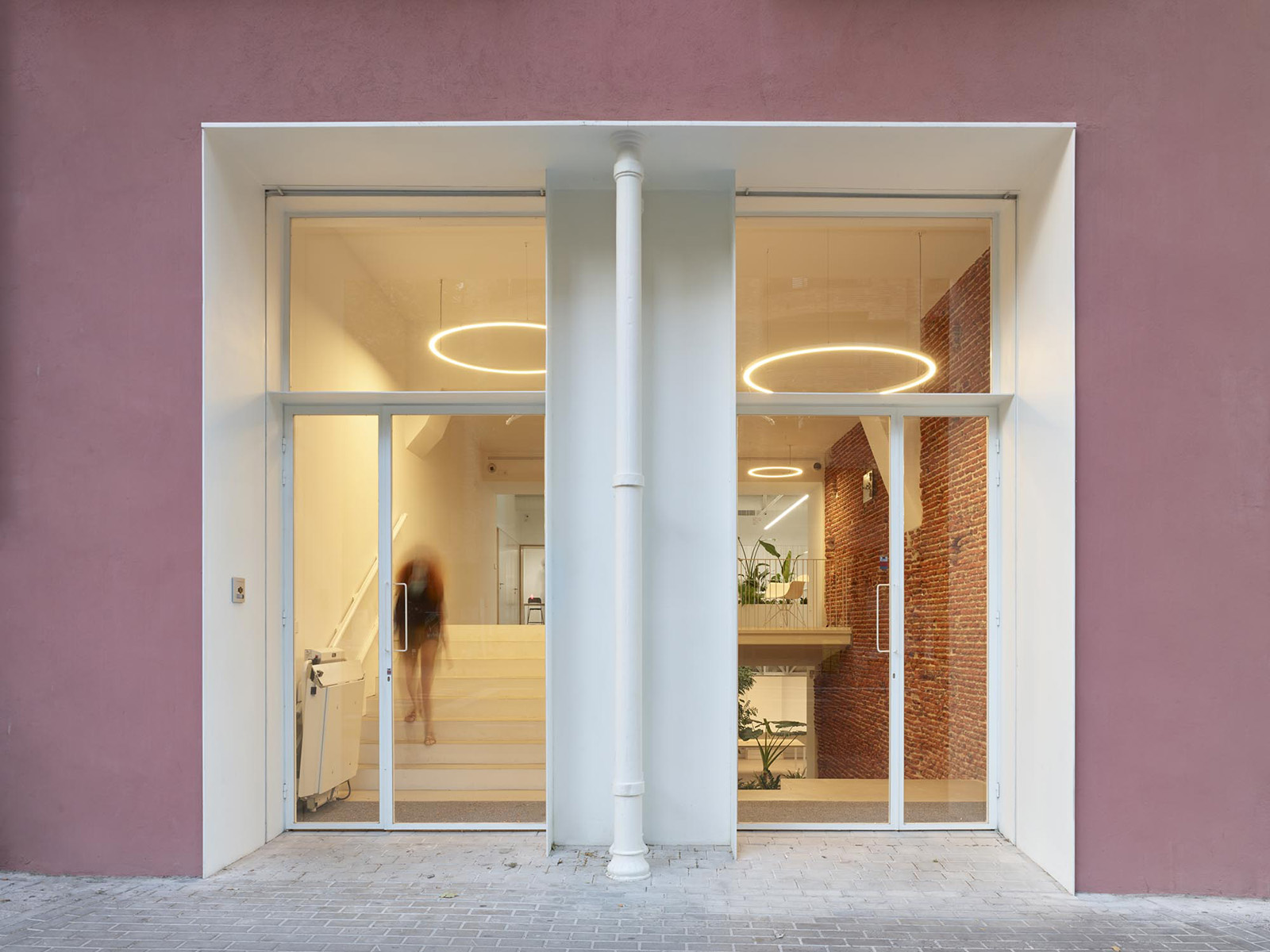 The double-wide car entrance was adapted to a more human scale; two ramps became open staircases that connect the upper and lower.

Bringing natural light into the subterranean level was a priority, so portions of the upper floor were removed to create a mezzanine-like effect. The roof truss was reinforced so that a series of transparent glass panels could be installed; they are orientated to both pull light down and to control its permeation so as to not overheat the interiors during Madrid’s hot summers. Private offices ring the perimeter of the top floor, while large meeting tables occupy the central space; editing suites, a call centre and a secondary boardroom are situated downstairs. Both areas were outfitted with custom-built furniture made from birch plywood, topped with Formica and supported by white lacquered steel legs. Helping to partition the wall-free main space above, the tables incorporate planters on their ends and running down their middles to house tall leafy greenery that doubles as screens when people are seated. 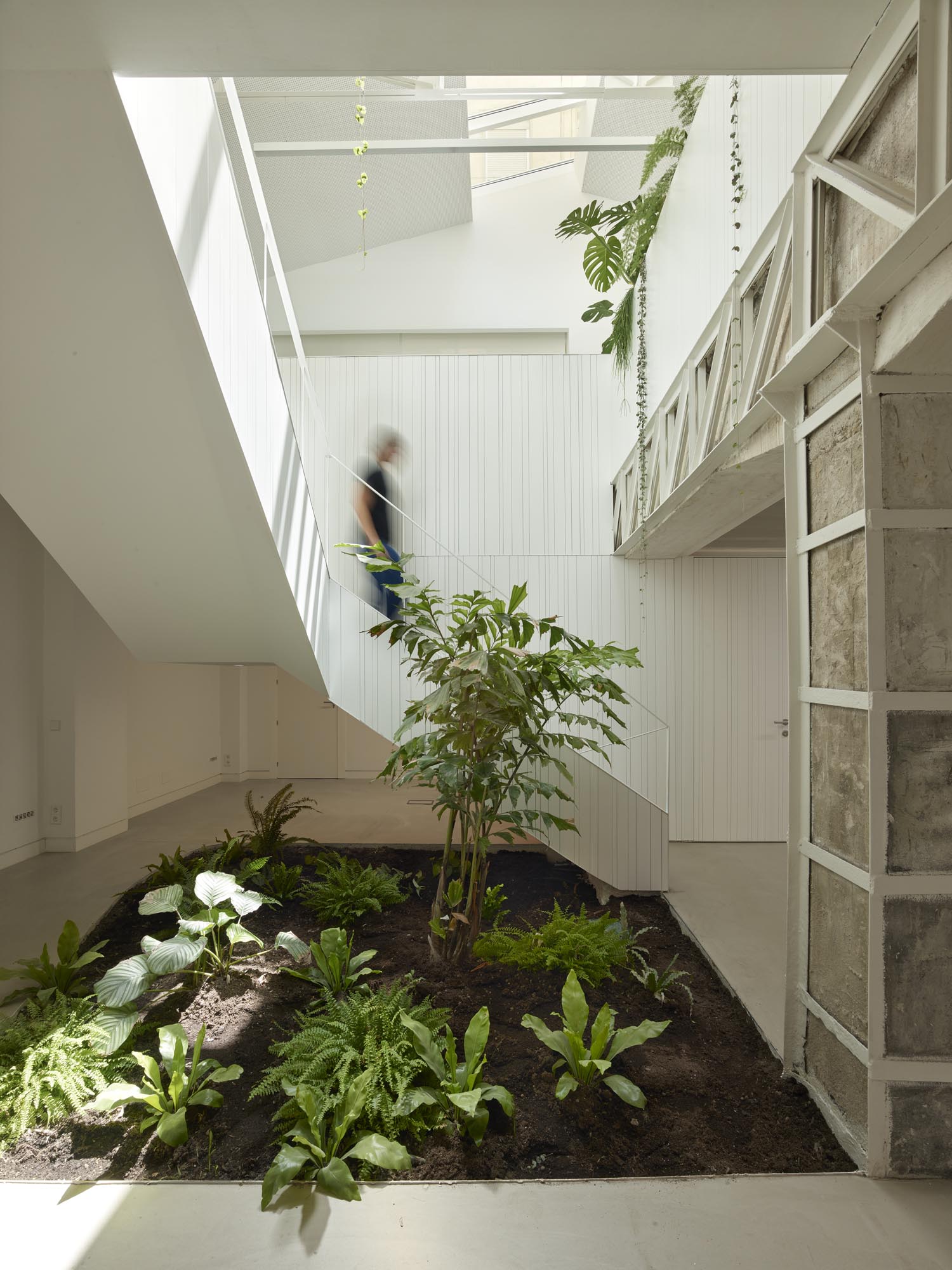 In the basement, garden beds were dug into the concrete floor, bringing an outdoor element to the subterranean interior.

“There were several proposals for vegetation — more Mediterranean, more domesticated — but the final choice,” says Casino, “was to be as lush as possible.” Working with landscape designer Carmen Varela, the team selected a variety of indoor tropical species that were durable and suitable to the light and temperature conditions, including Monstera delicisiosa, Howea forsteriana and Cyperus papyrus. While the upstairs planters (which incorporate a ventilated self-watering system equipped with waterproof drainage) are organized, things downstairs are a little wilder. Two garden beds were dug directly into the concrete floor, one at the base of the entrance and one directly underneath the skylights. “They give an underlying sense of being in a garden, an undomesticated one in contrast to the orderly architecture,” says Angelini.