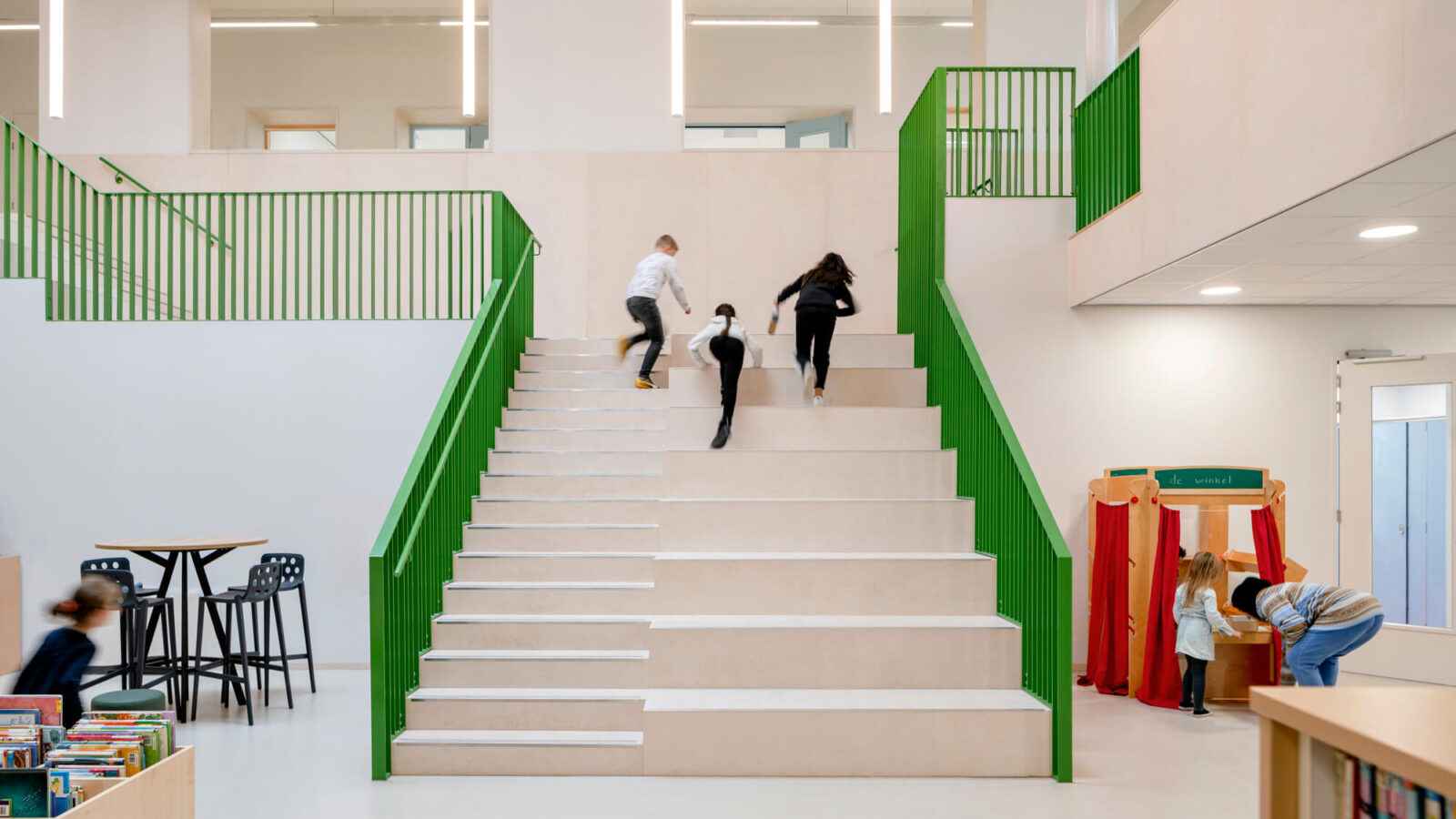 Studio Nauta and De Zwarte Hond team up to update — and elevate — this 1930s structure by celebrating the spaces in between.

When school officials and community members in the Dutch city of Leeuwarden studied the old two-storey brick building on Willem Sprengerstraat, they didn’t see a lot to love. Originally built in 1929 and occupied by the Prins Constantijn primary school and Sinne daycare centre, it had been cut up and reconfigured so many times over the decades that its original appeal had been obscured by a series of cramped, disjointed spaces. 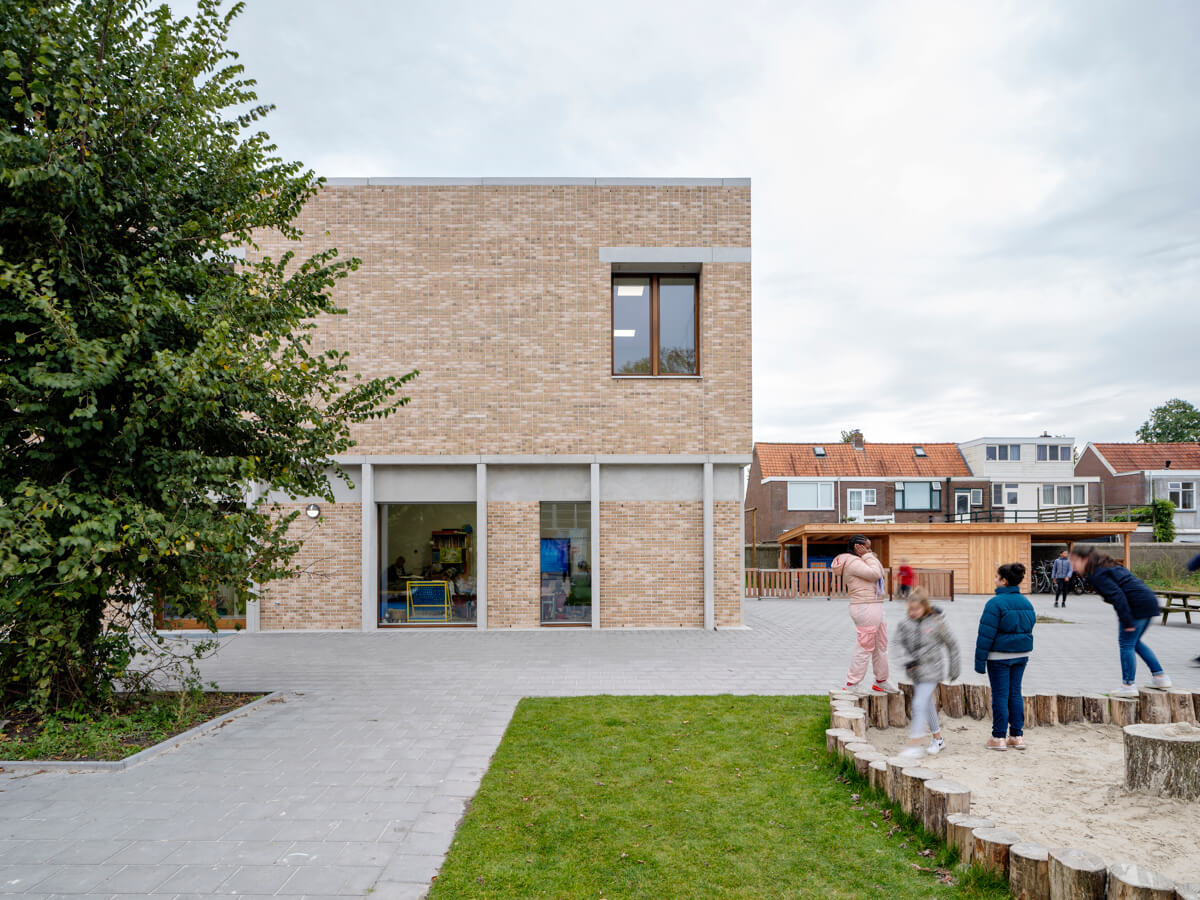 With a muted new addition that gives way to a playful and pared-back interior, the existing 1930s structure has a fresh future as the Prins Constantijn primary school and Sinne daycare centre

As the need for an expansion became clear, many advocated for total demolition. City planners, however, hesitated. So when authorities organized a design competition, five teams of architects were instructed to develop two concepts each — one based on razing what was there and starting fresh; the other based on adding onto the old building.

It didn’t take long for the Rotterdam-based firm Studio Nauta and Dutch and German practice De Zwarte Hond to see through the clumsy interventions to something worth saving. “It’s quite a beautiful building, in the so-called Amsterdam Style, which is a rich masonry-based structure where craft is very much part of the architectural language,” says Jan Nauta, founder of Studio Nauta. “There had been a lot of improvisation over the years, with layer over layer and low ceilings. It was a clogged-up version of what was, in essence, really good 1930s architecture.”

By performing an architectural reset on the building, the team realized they could also make a strong case for an addition that was more ambitious than budgets would normally allow. “The original building is generous in its proportions, levels of daylight and materiality,” says Nauta. “These are qualities that you wouldn’t be able to realize today because everything is based on certain norms. We had a good argument to say, ‘If we’re going to construct a new building against this old one, then it also has to be generous.’ ” 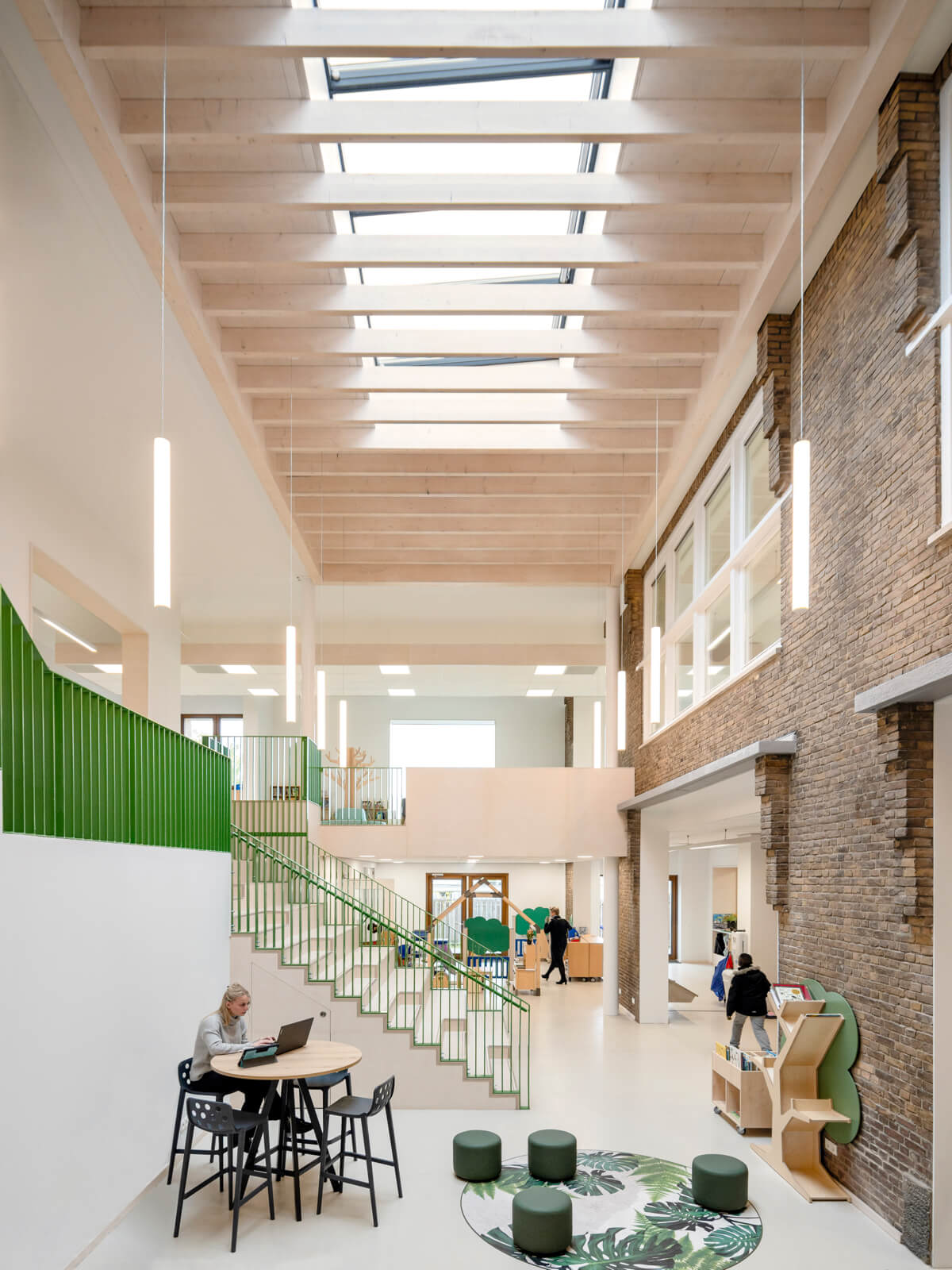 A central atrium — topped by a large skylight — was created between the existing brick edifice and the new addition. It’s grounded by an amphitheatre-like staircase trimmed in vibrant green railings

Inside, these qualities are apparent as soon as children enter. The hub of the reconfigured school is a soaring sun-drenched atrium that uses one side of the old building as an interior wall. The architects expanded windows into doorways and added a broad central birch plywood staircase with vibrant green metal railings that evokes a touch of the trees outside while doubling as a circulation path and amphitheatre seating. “A stair is something you have to make anyway, to get from one floor to the other, but we also thought about where they’re going to do the end-of-year play,” says Nauta, adding that one of the openings in the old brick facade now functions as a stage. 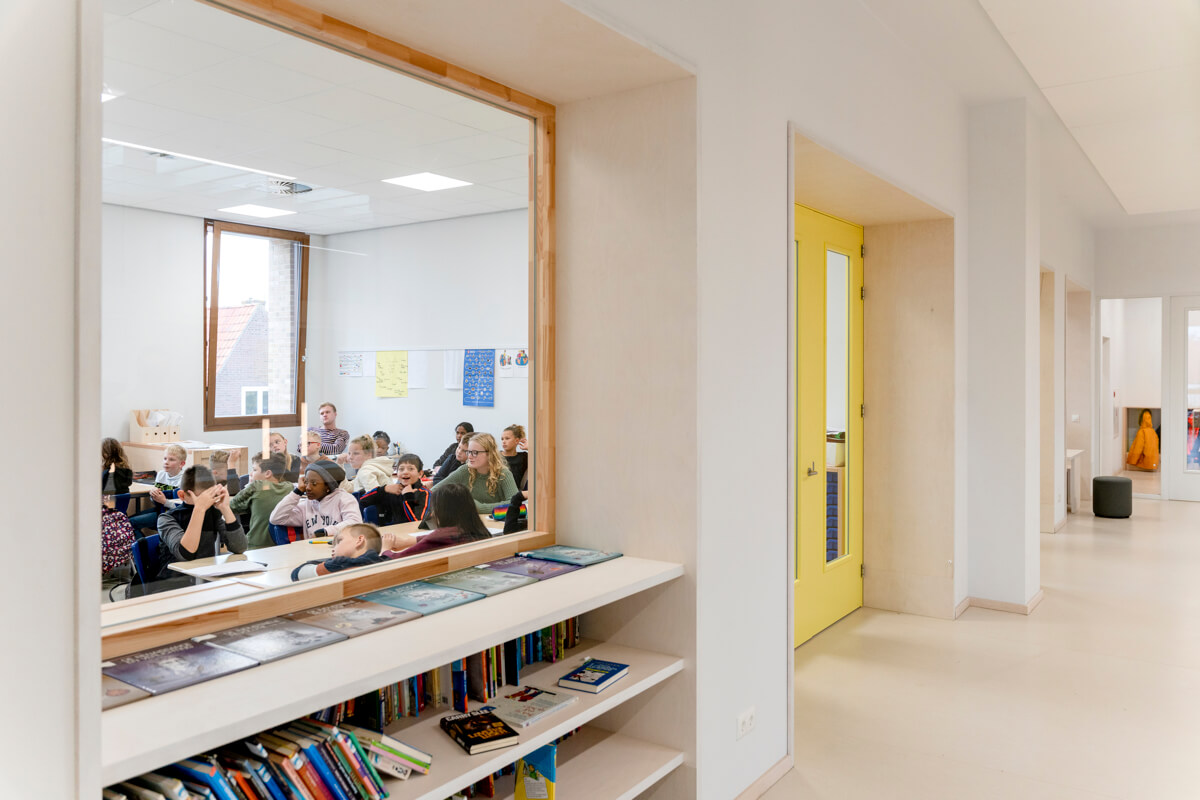 Large openings in classrooms allow ample light to filter through the entirety of the new addition.

Beyond the atrium, the expanded 2,050-square-metre interior provides not only classrooms for more than 200 children, but also plenty of common areas for breakout activities and casual encounters. “We created compact classrooms so we could have a series of corridors with intimate common spaces, as well as larger rooms where groups can congregate,” says Benjamin Filbey, project architect at Studio Nauta. 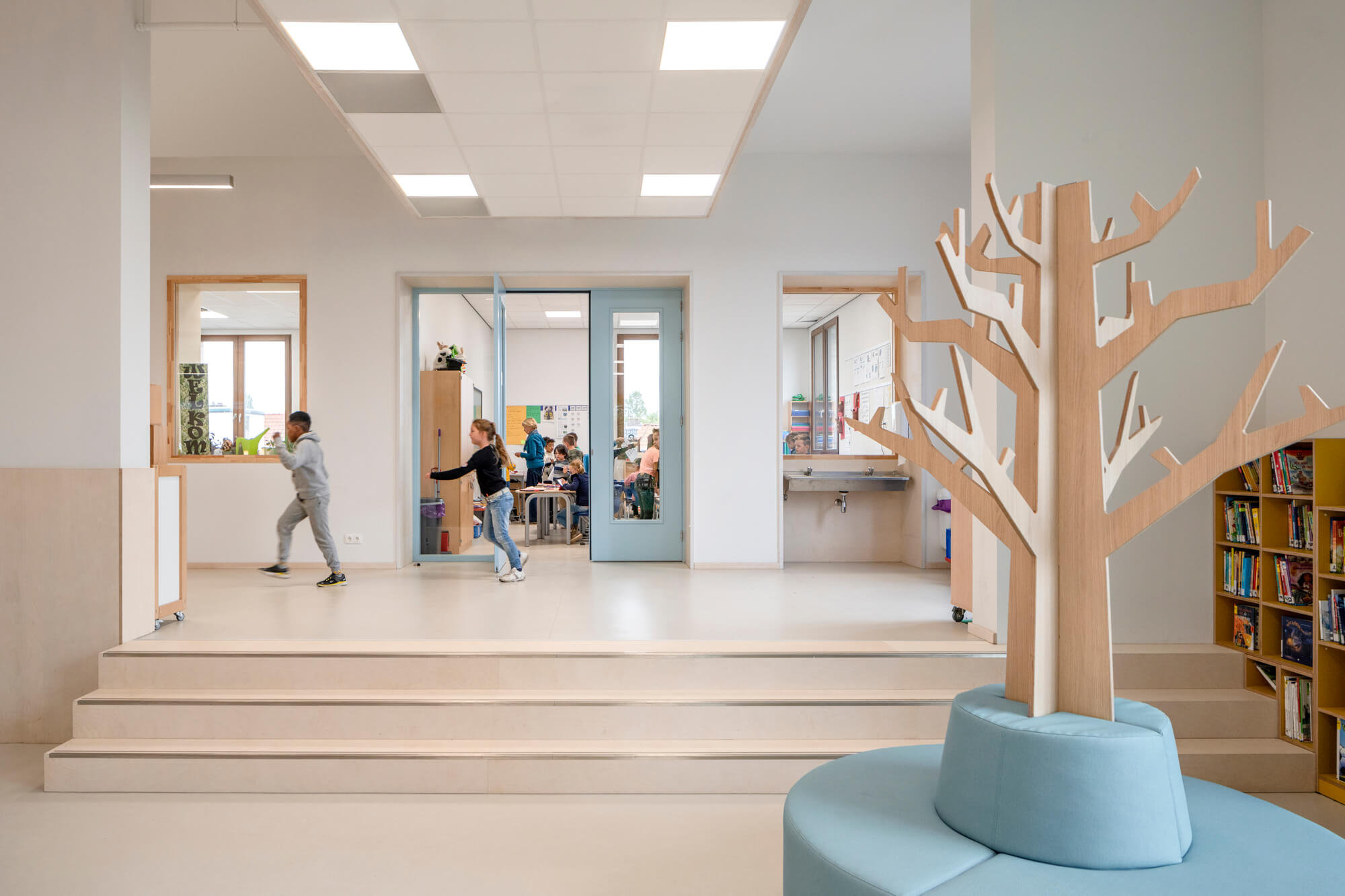 Coordinated hints of colour animate the second floor, both in custom furnishings and on doors and frames.

In between classrooms and hallways, the architects introduced “thick walls” to create interstitial spaces lined with custom millwork that provides shared elements such as bookshelves, cubbies for coat storage and handwashing stations. Subtle hints of blue and yellow appear here, as well as on doorways and in bespoke furnishings across the upper level. Accompanying the play area outside, the second floor also features an indoor gymnasium flooded with ample natural light.

Studio Nauta and De Zwarte Hond ensured natural light was integral to all interior spaces. Large rectangular windows in the classrooms maintain this connection to the outside.

In this way, the school employs many of the same techniques found in contemporary corporate campuses and research facilities, where social mixing and happy accidents are encouraged. “These in-between zones,” says Nauta, “are precisely where inspiration is found and the unexpected can happen.”  ​

Studio Nauta and De Zwarte Hond team up to update — and elevate — this 1930s structure by celebrating the spaces in between.