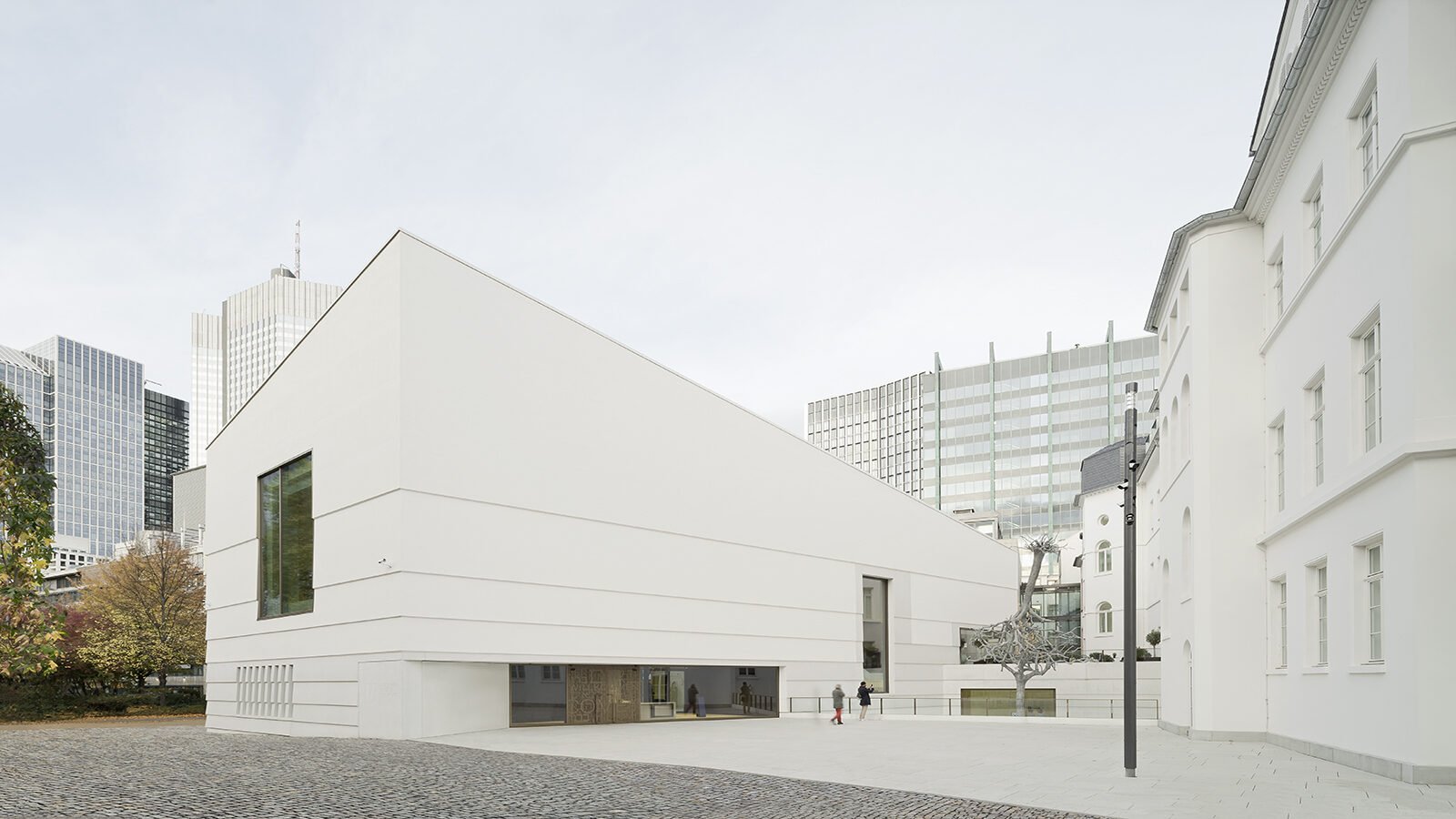 Staab Architekten’s graceful renovation and expansion of the landmark Rothschild Palace bridges past and present.

Frankfurt’s original museum of Jewish antiquities — Germany’s first — was barely 16 years old when it was destroyed by the Nazis in 1938. By the end of the Second World War, the vast majority of the city’s 30,000 Jews had been murdered in the Holocaust. In 1988, on the 50th anniversary of Kristallnacht, the city inaugurated a new Jewish Museum, this one with two branches: one on the site of Frankfurt’s former ghetto, which is dedicated to Jewish life and culture in the medieval and early modern era, and another situated in a pair of connected mansions, covering the period from 1811 (when the ghetto was finally abolished) to the present day. 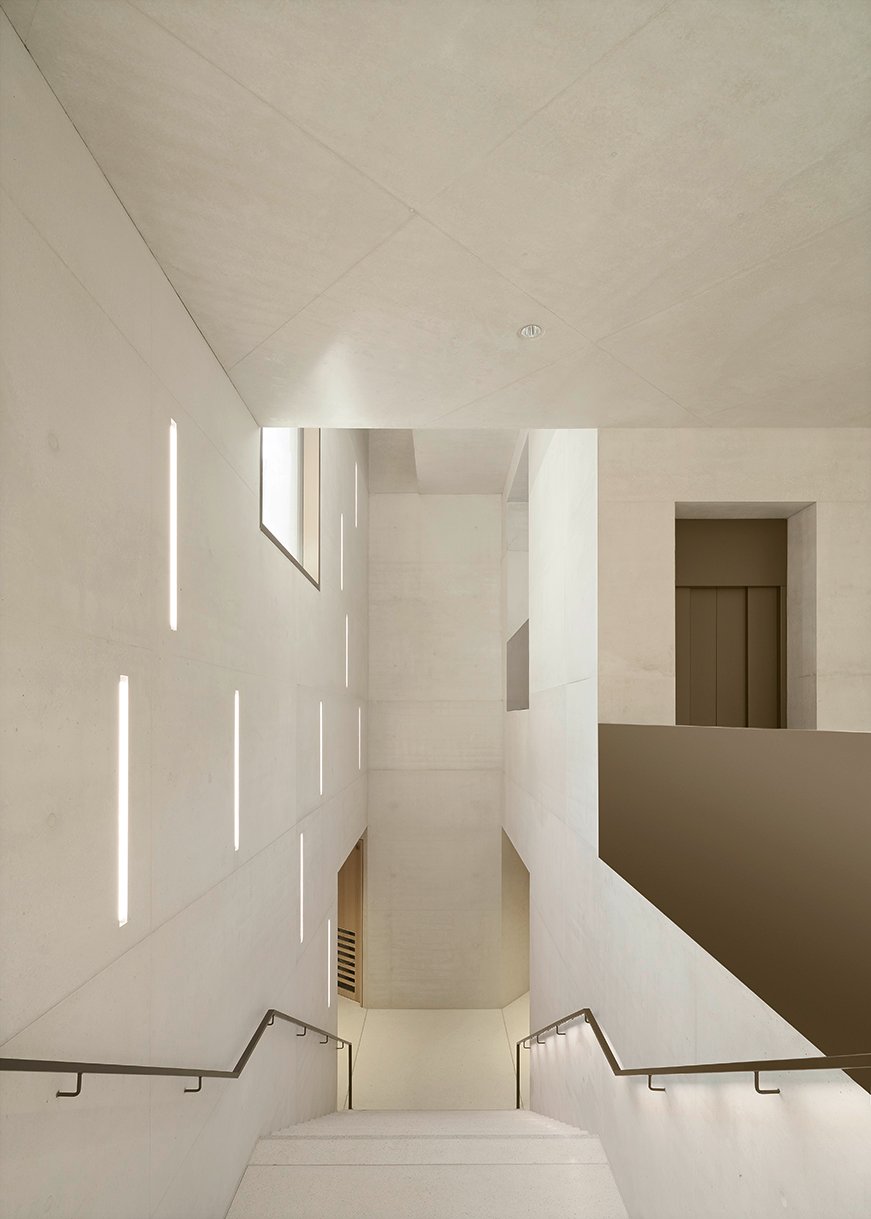 Recessed lighting in the subtly textured concrete surfaces augments the balance of spareness and richness inside the museum addition.

The larger of the two mansions once belonged to Baron Mayer Carl von Rothschild; it miraculously survived Allied bombing and remains as one of the few historic buildings standing in Frankfurt’s modern high-rise city centre. Prominently located on the north bank of the river Main, this palatial branch just received a major new extension and renovation courtesy of Berlin-based Staab Architekten. “The idea was to create a kind of relationship between the new and the old without losing the sense of the contemporary,” explains founder and principal Volker Staab. “We didn’t want to touch the old buildings.” 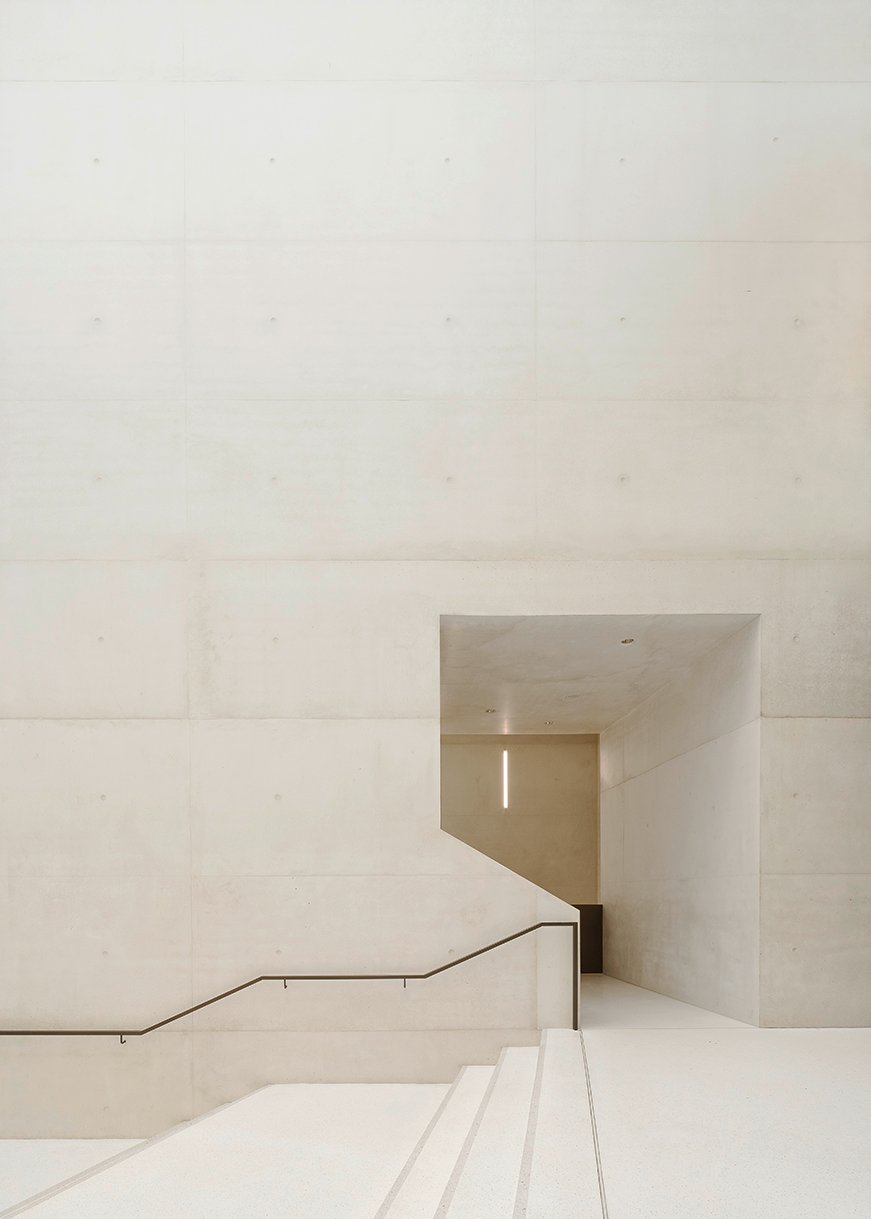 While effectively doubling the size of the museum, the architects respectfully deferred to the neoclassical mansions, especially the Palais, which the Rothschild family turned into a public library and eventually donated to the city in 1895. “The Rothschild Palais plays a significant role in Frankfurt’s modern Jewish history,” explains the museum’s deputy director Michael Lenarz. “After the war, the building became a collecting point for looted Jewish scriptures and books,” he adds.

To this history, Staab and his team have managed to append a respectful, strongly contextual addition that nonetheless thoroughly reinvents the complex. And, within the Rothschild Palais, a number of the original interiors have been meticulously restored to their former grandeur, while the rest have been sensitively converted into more pared-down spaces housing the museum’s permanent collection. But Staab’s intervention went further: It introduced a revived urban presence to the ensemble. Located on a narrow pavement lining a busy arterial road on Frankfurt’s riverfront, the former main entrance was not fully accessible. And while the museum’s public face was hemmed in by car traffic, its back was a forgotten area filled with garbage bins and parking spaces. 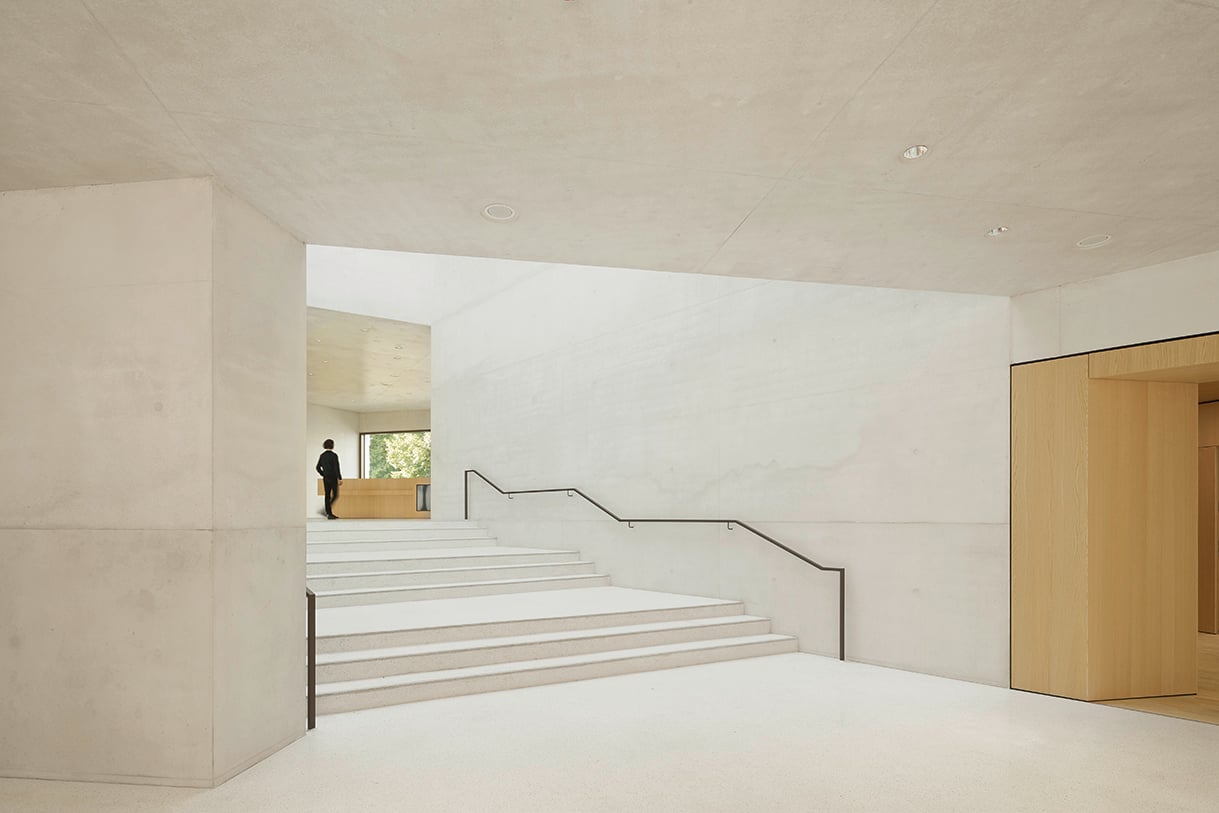 The extension resolves these spatial conflicts and transforms the museum complex into a worthy urban node. Standing separate from the old palace, the new rhomboid wing, rendered in white, encloses a welcoming entrance courtyard. Horizontal bands on its facade are at once a distinguishing feature and a subtle classical motif that create a visual relationship with the historic buildings opposite. A sculpture by Israeli artist Ariel Schlesinger — of two fig trees with intertwined branches, one planted in the ground, the other pointing its roots to the sky — stands as a powerful monument to resilience in the face of displacement. 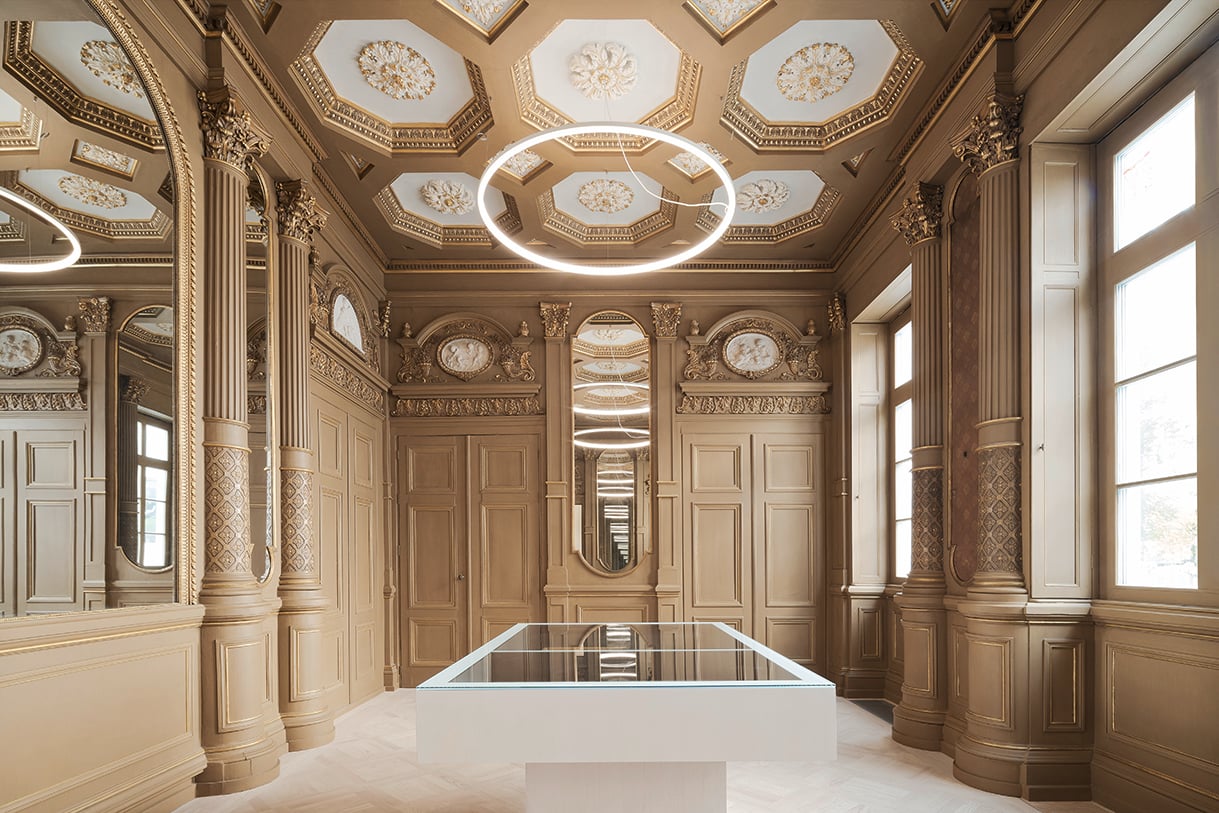 The Rothschild Palais’s opulent interiors have been meticulously restored and updated with simple yet unapologetically contemporary lighting.

The entrance courtyard leads to a generous foyer with a lecture hall on one side and a wide, gentle stairwell on the other. A showpiece atrium above brings light deep into the heart of the new building, illuminating the elegantly spare concrete walls. From here, visitors can continue to the half-sunken basement of the old palace and take in the permanent exhibition, or venture down another set of stairs to visit the temporary displays in the new wing’s basement. Staab’s building also contains the museum’s large library and extensive archives, and features a picture window in its reading room that frames sweeping views of the contemporary city. In the older wing, meanwhile, two new elevators — inserted within less historically expressive parts of the old structure — now make the whole museum accessible. 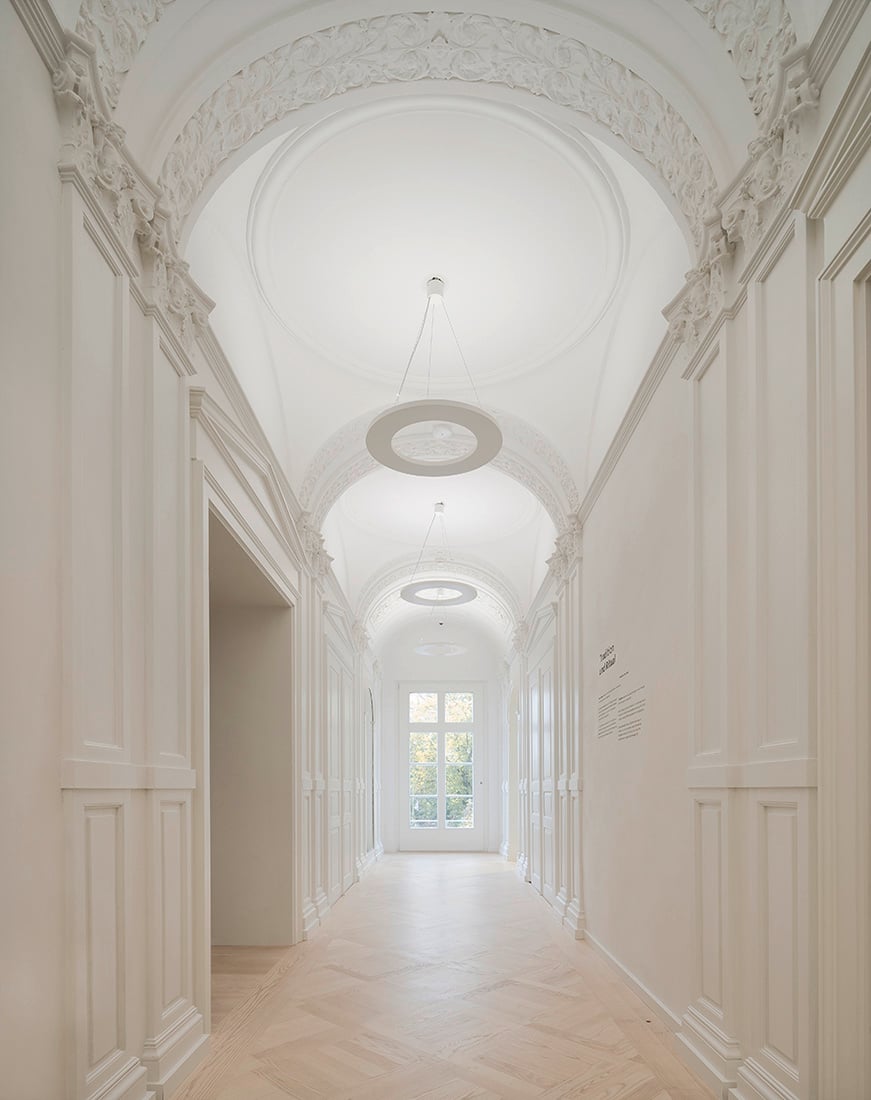 A sense of calm permeates the sculptural interiors. Their white concrete walls, ceilings and floors are subtly complemented by the pale timber panelling of the reception area and the framing of the internal window that visually connects the library with the main foyer. Slender grey handrails form an almost intuitive wayfinding device, pointing visitors toward the exhibition spaces. The muted colour palette — greys, matte gold, white — is even carried through to the historical palace, creating a sense of continuity between the two contrasting structures.

Staab’s design succeeds on a pragmatic level, but it goes beyond that. By combining sensitivity to both the physical and symbolic contexts of the building, the architects have created room for powerful narratives, making the Jewish Museum a dignified and generous space for remembrance, learning and hope. “In Jewish museums, there’s always the question of how the architecture has to have a kind of narrative and resonance with Jewish history,” says Staab. Not so, here. “It’s the museum which creates the narrative about the history of the Jewish culture in Frankfurt; the architecture offers a platform and a framework for this.

Staab Architekten’s graceful renovation and expansion of the landmark Rothschild Palace bridges past and present.