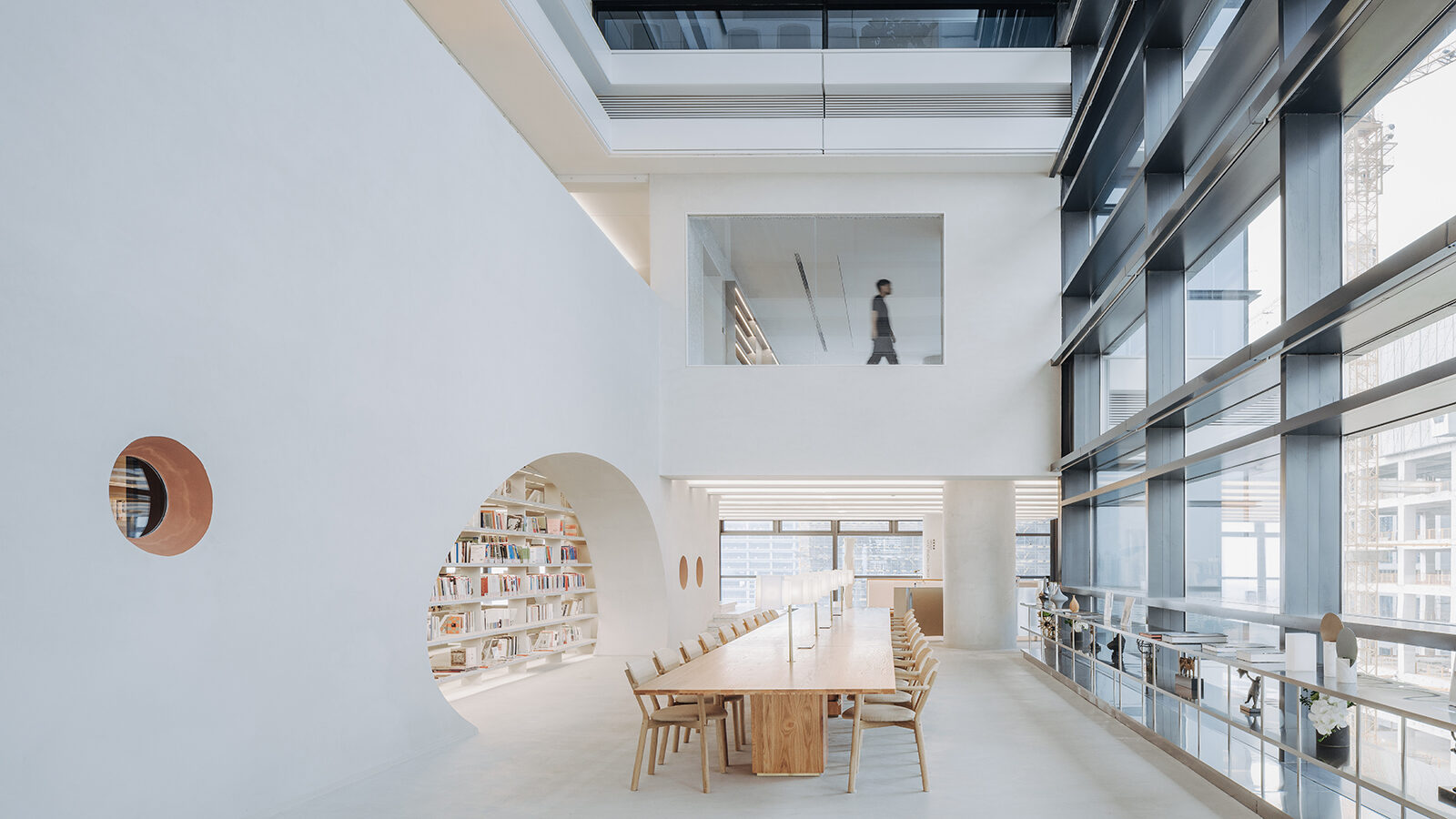 At once otherworldly and restrained, Wutopia’s Guangzhou bookshop is a meditative riposte to consumer-driven culture.

China’s bookstores — once largely drab, state-run and pragmatic spaces — are slowly evolving to attract a new generation of social media–savvy clientele through daring design. Escher-inspired staircases and towering shelves are the country’s flavour du jour, an arrangement that plays well on camera but can feel as hollow as the fake books that sometimes adorn the shelves. Shanghai’s Wutopia Lab, however, is striving to return the bliss of reading to the heart of bookstore design. 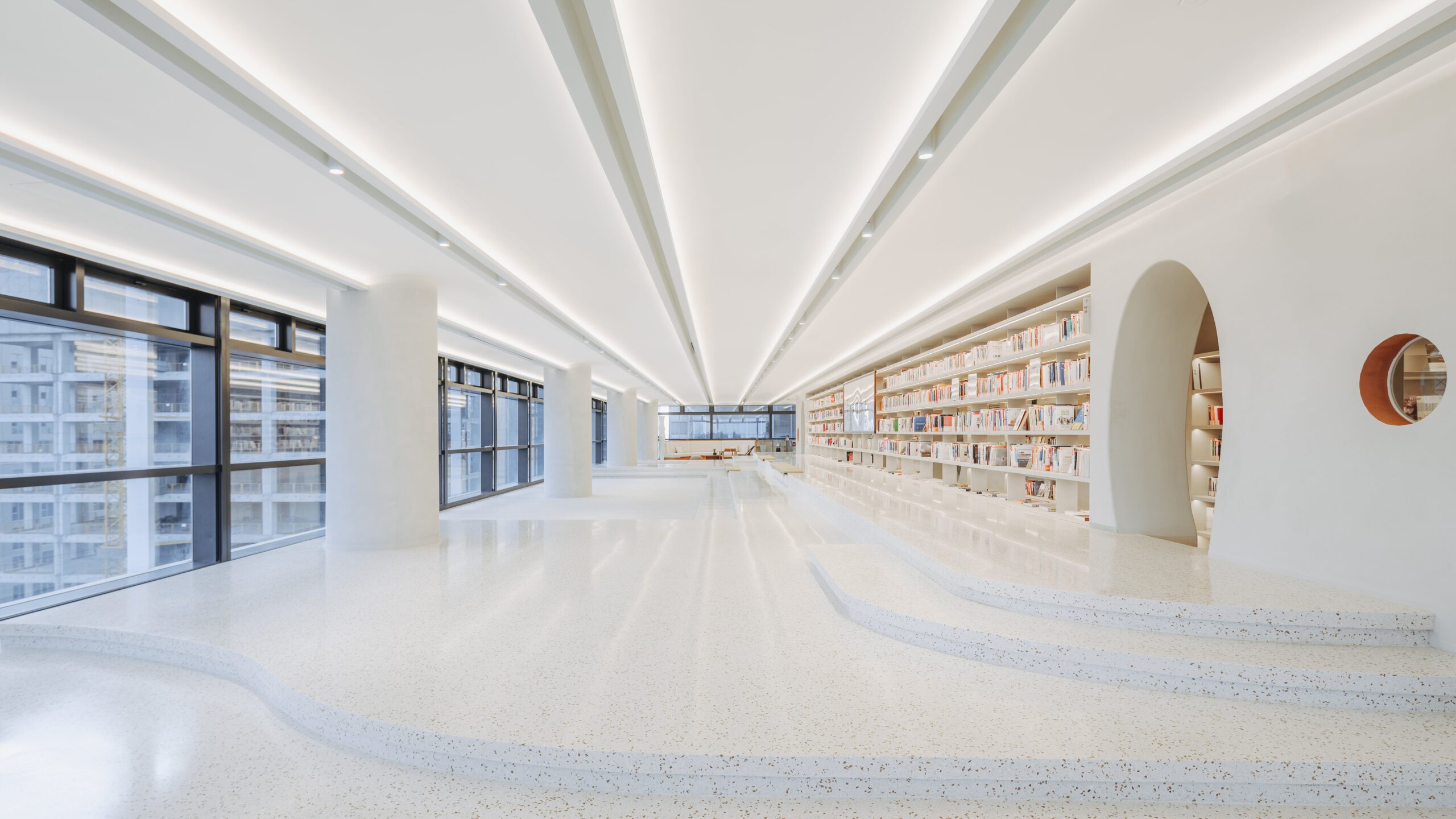 The linear accents along the ceiling and across the stairs of Wutopia Lab’s Satori Harbor emphasize the openness and generosity of the space.

Marking the design studio’s 10th book-related project since 2013, Satori Harbor in China’s sprawling southern port city of Guangzhou is Wutopia’s most explicit spatial response to a typology in existential flux. Drawing from zhaoche, the Taoist concept of enlightenment (known as “satori” in Japanese), the space is crisp and meditative. 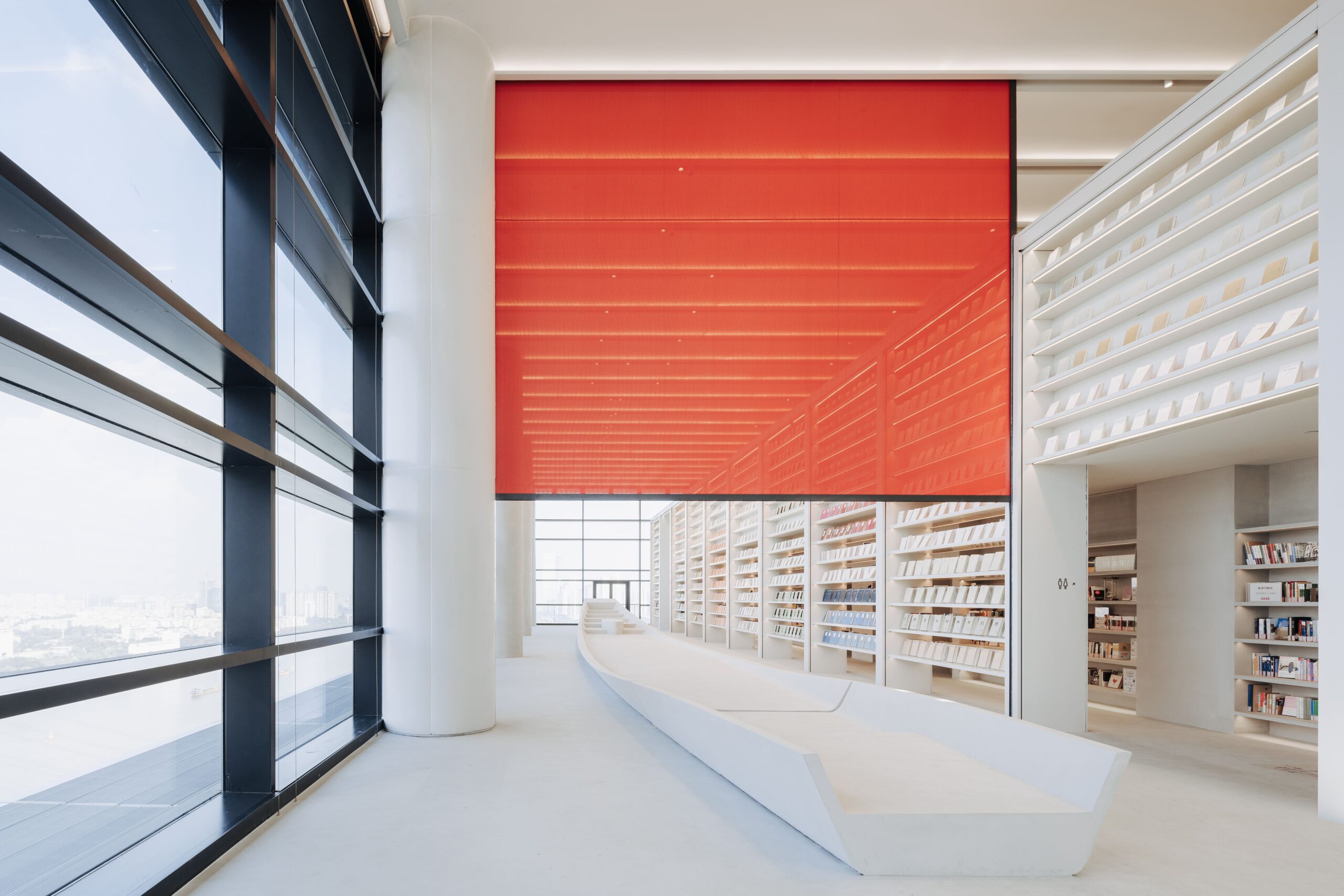 Yet, as this is the library of Chinese e-commerce company Vipshop’s new headquarters — tucked into the 18th and 19th floors — chief architect Yu Ting was also conscious that a design espousing the virtues of material detachment may not align with the consumption-driven realities of business. Ting then posited the task as a measured counterbalance. “As architects, we should see any design as an intervention, and we took the Satori Harbor to be an intervention for Vipshop — which greatly encourages consumption — through a neutral space that stimulates people to think,” he says. “Restraint and spirituality cannot exist separately from desire; they always influence each other.” 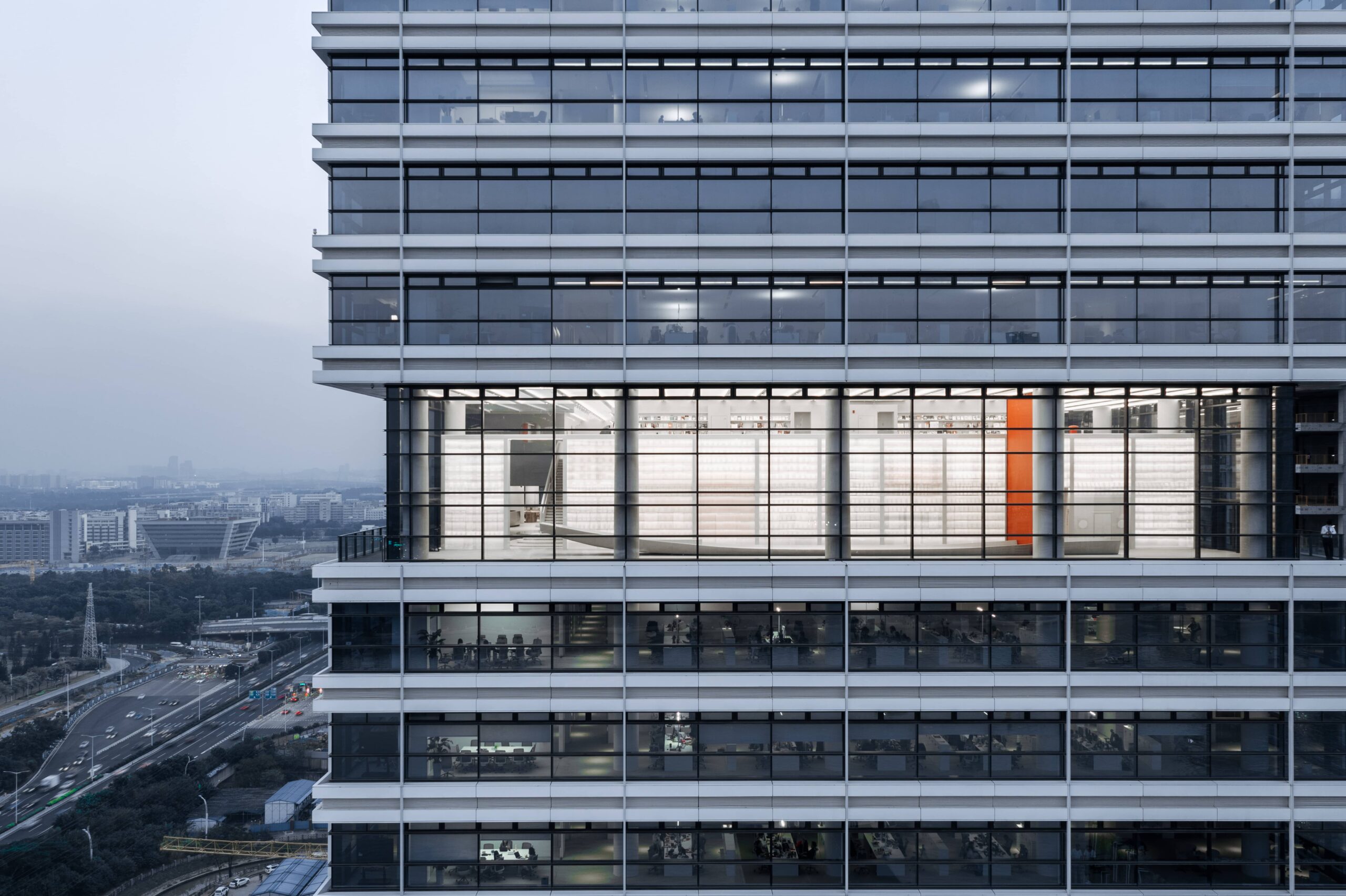 Situated on the 18th and 19th floors of an office tower, Satori Harbor stands out as a floating beacon against the skyline.

Even almost 20 storeys up, that grounded, Zen-like neutrality is immediately apparent. Arriving in the dimly lit and cavernous hall, visitors are conveyed through the pebble-shaped entrance — a recurring motif — and a sound dome emitting the gentle thrum of crashing waves. On the other side, natural light floods the 2,200-square-metre space, reflecting from the desaturated beige stucco walls and bookshelves, as well as the staggered and curved white terrazzo flooring, which hints at the natural undulation of rolling sandbanks. Inside, a quiet grotto absent of hard edges invites readers to get lost in thought, while the children’s play area is animated by a brilliant burnt orange carpet. The effect is minimal but not cold, calm but kinetic — a sanctuary that promises peace after a long journey. 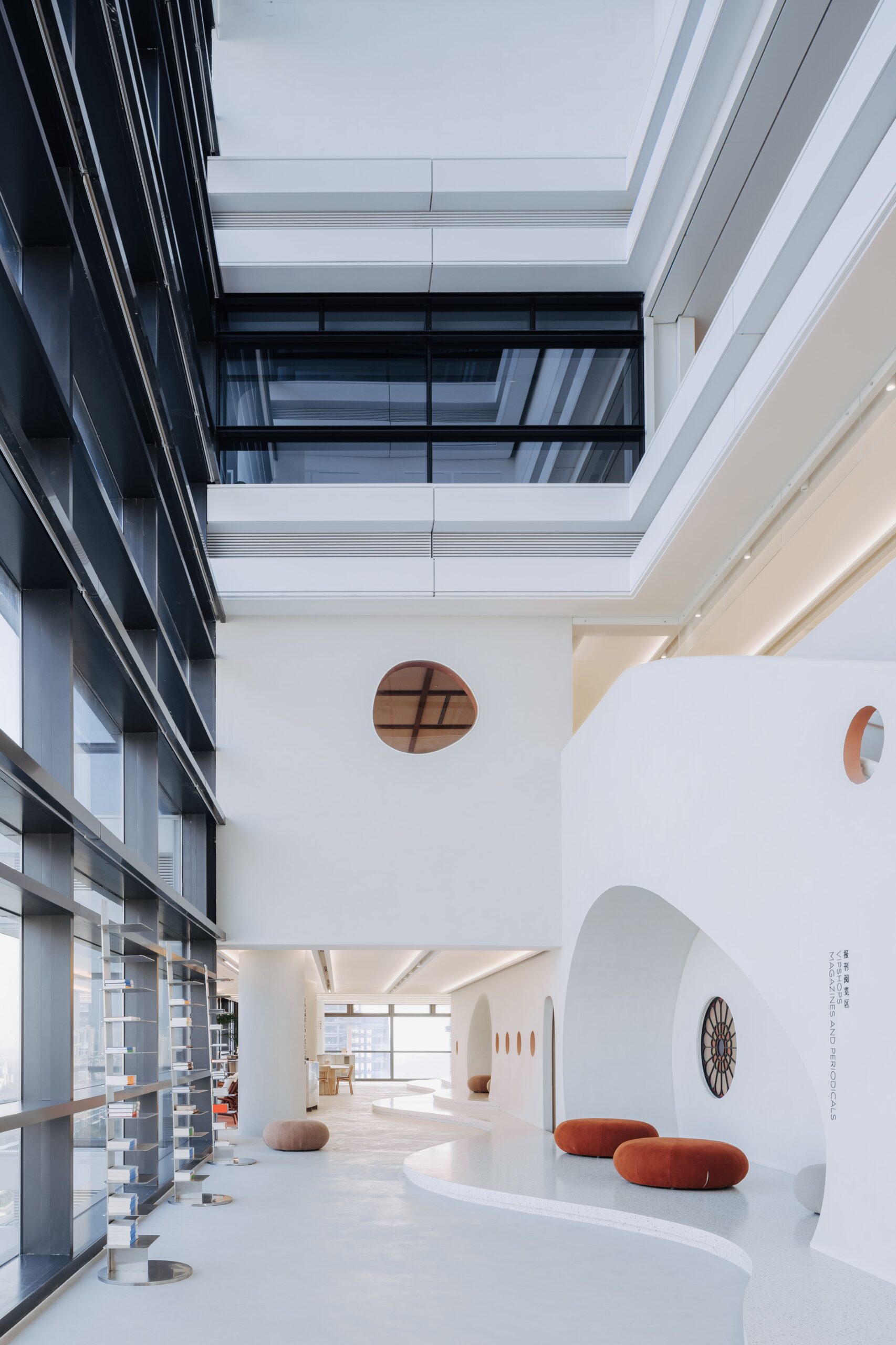 Double-height windows flood the space with light. The expansive glass wall also serves as a unifying element across a richly varied interior. 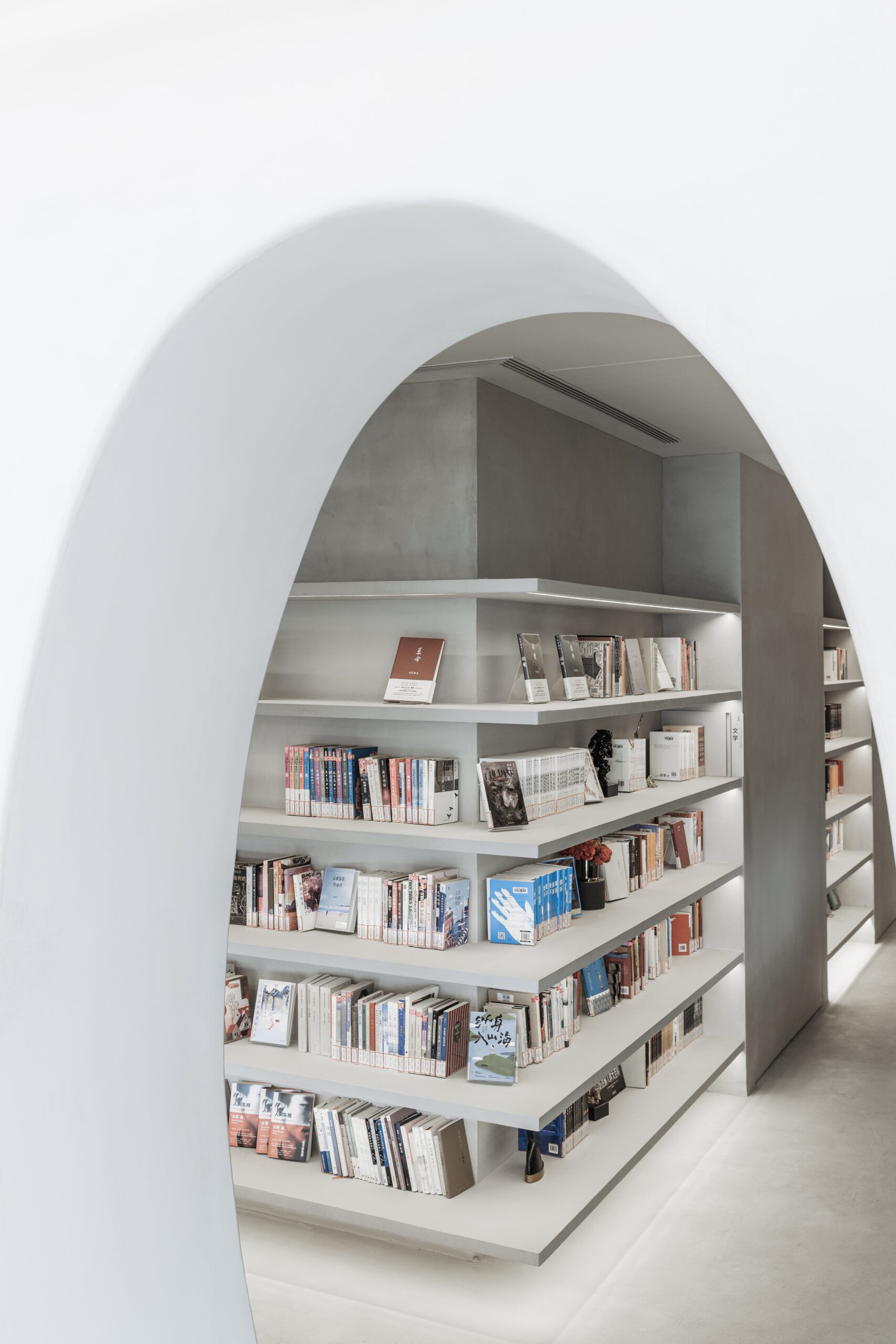 While Wutopia’s sinuous, poetic design makes for a memorable space, books — real ones — are at the heart of the experience.

Nowhere is the premise of expedition more apparent than in the library’s centrepiece: an abstract steel-reinforced boat with a stucco finish, which stretches the width of the southern window, its retractable red sail acting as a partition to create a concealed meeting space. Blinds on the adjacent bookshelves can also be drawn, revealing stylized facades of Guangzhou’s Thirteen Factories — the sole legal point of trade between the West and China from the mid-18th to the mid-19th century, as well as the former location of the company’s headquarters. “The owners wanted this library to showcase one of the ambitions of Vipshop,” Ting explains, “[that is,] to select the best products in the world for the Chinese.” 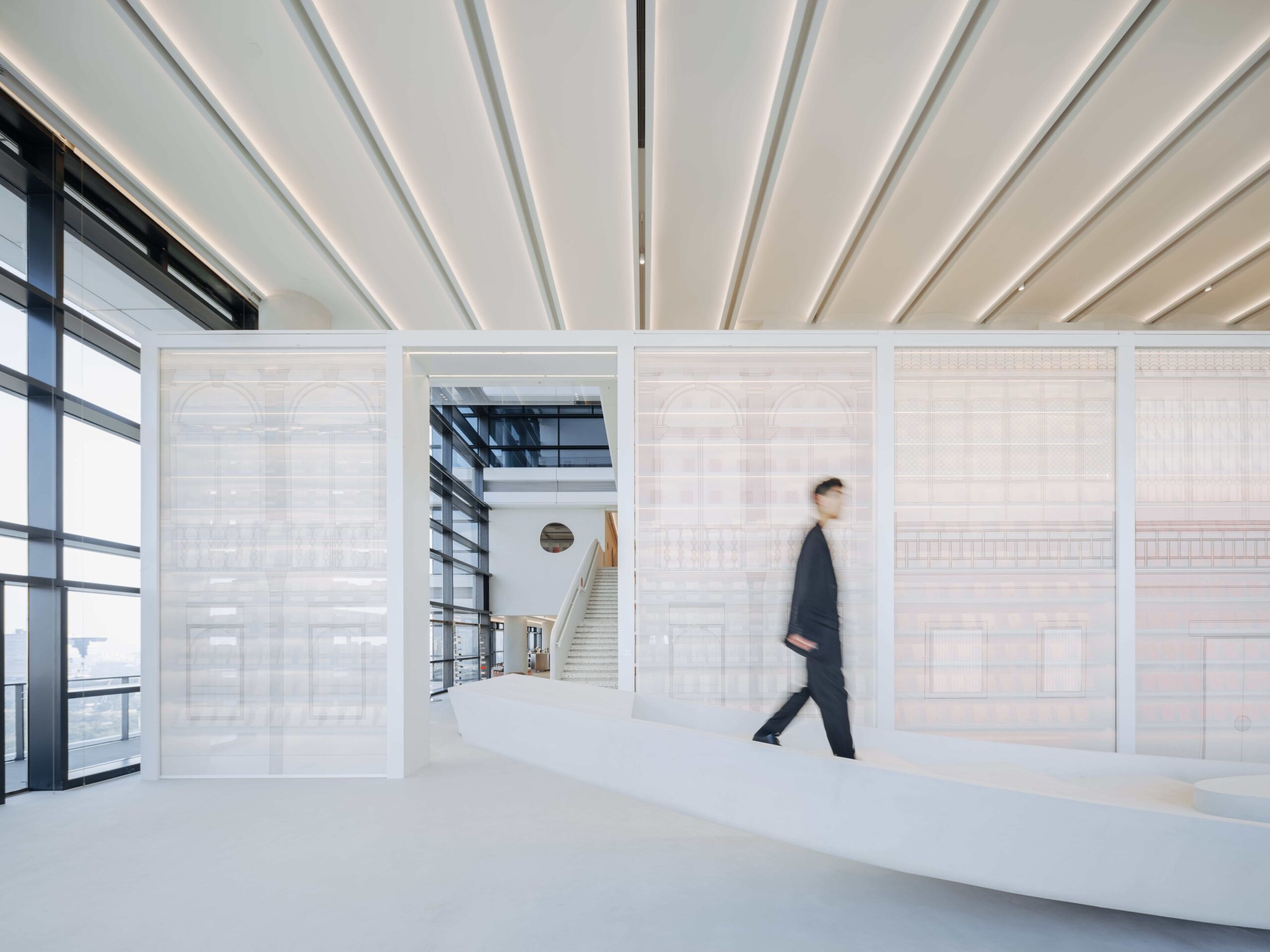 Translucent screens amplify a sense of floating and weightlessness in the high-rise library.

It’s a subtle reminder that Satori Harbor was born out of China’s long tradition of material wealth living in harmony alongside the pursuit of wisdom. The library is an invitation to escape worldly concerns, yet its composed restraint also demonstrates that we are often rewarded for the opportunity to grow, and that enlightenment is attainable even in the most commercial of surroundings. 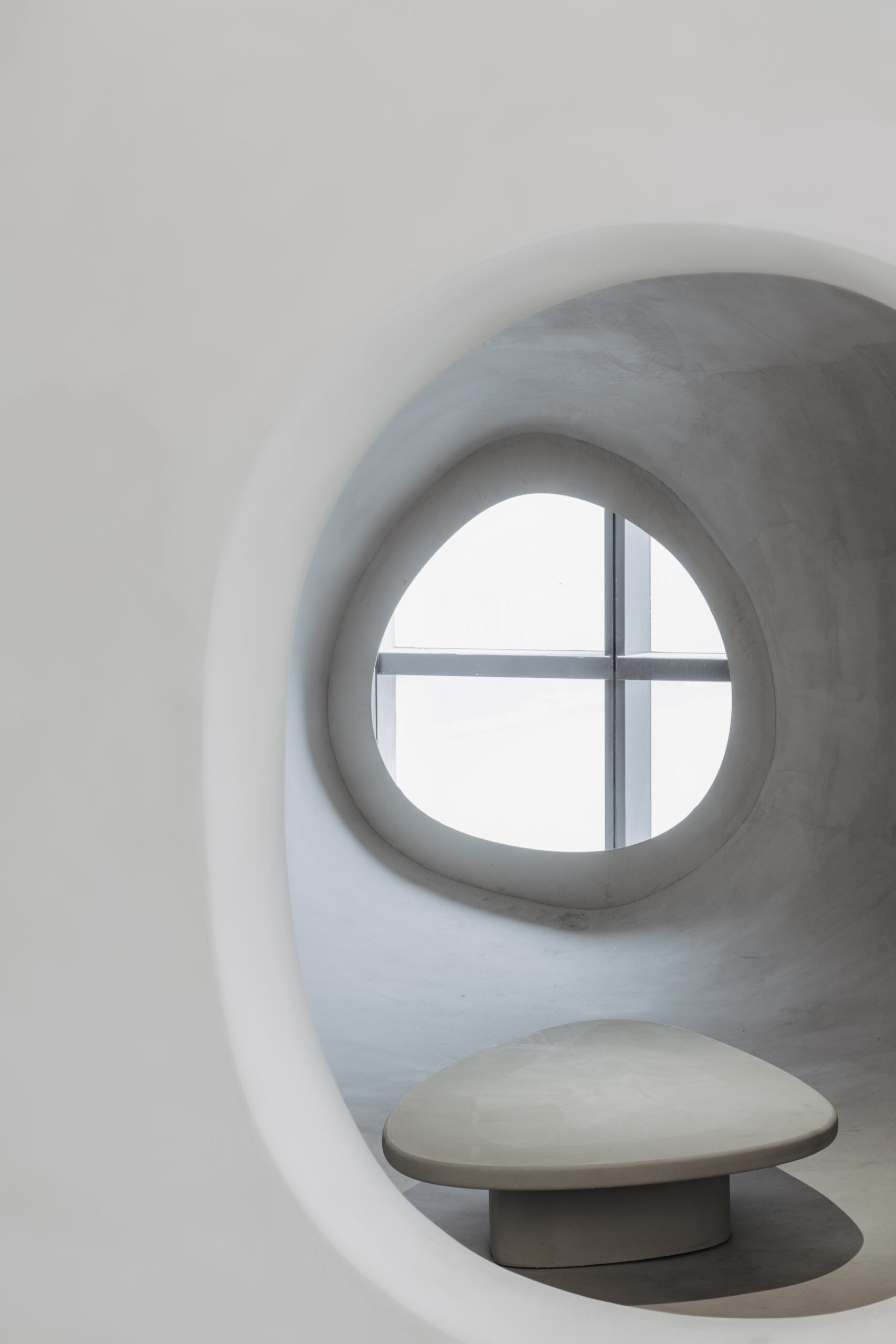 At once otherworldly and restrained, Wutopia’s Guangzhou bookshop is a meditative riposte to consumer-driven culture.