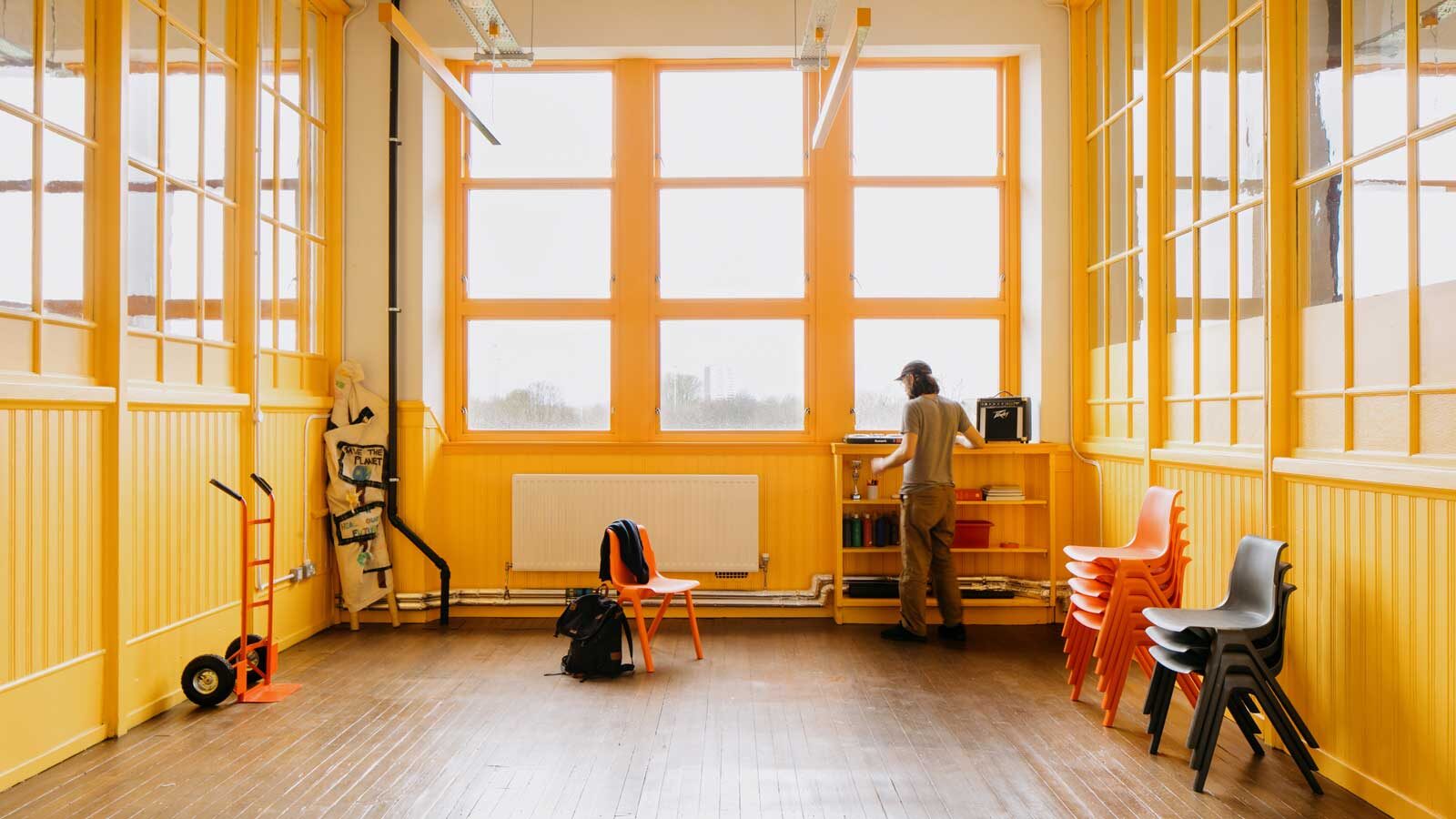 For their renovation of Kinning Park Complex in Glasgow, New Practice lightly intervened to create a usable, adaptable and sustainable space for the community.

Kinning Park Complex, a community building with a radical history in South Glasgow, has undergone a sensitive and understated refurbishment by architecture office New Practice. The result is a warm and functional space that serves the local community. 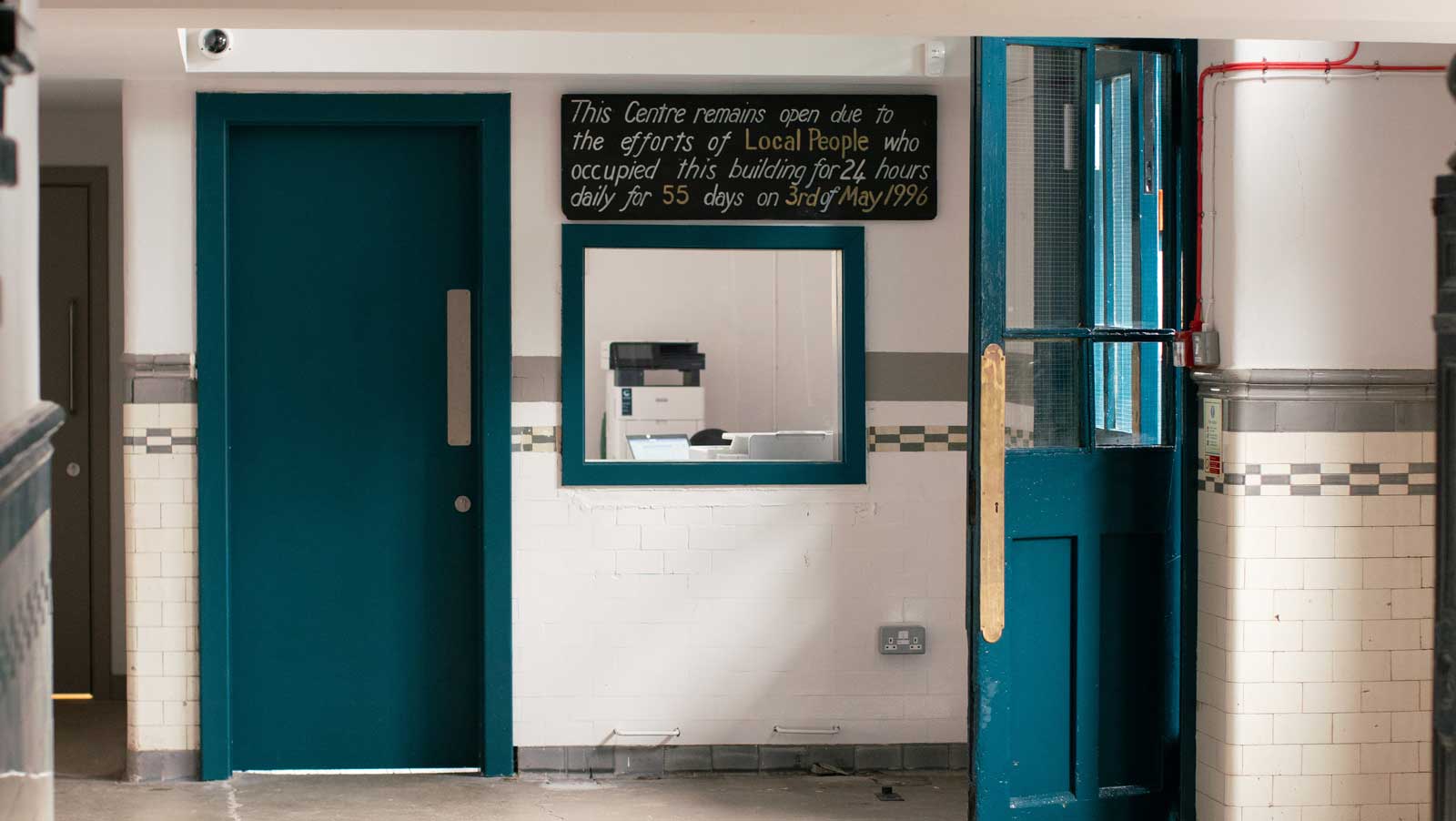 Immediately upon entering the Kinning Park Complex, its rich history of activism is clear. Written proudly above the reception desk: “This centre remains open due to the efforts of local people who occupied this building for 24 hours daily for 55 days on the 3rd of May 1996.” The complex’s strong identity and previously established program of activities — which ranges from cooking classes and dance lessons through to the Red Sunday School, a program for young local children to learn about socialism and labour rights — clearly led the restoration work by New Practice, who describe their approach to the project as “supporting the existing space.”

“To have a light touch” often refers to making a stylistic choice in architecture: preserving what already exists and allowing it to be accentuated. It can, as in the case of New Practice’s approach to Kinning Park, also mean a decision to trust people as experts within their own arenas, able to assert their own space and autonomy. New Practice’s work goes beyond the physical restoration of the building to demonstrate their ability (and the possibility of architects more broadly) to not only work as designers but be socially, physically and bureaucratically active in retaining community spaces. 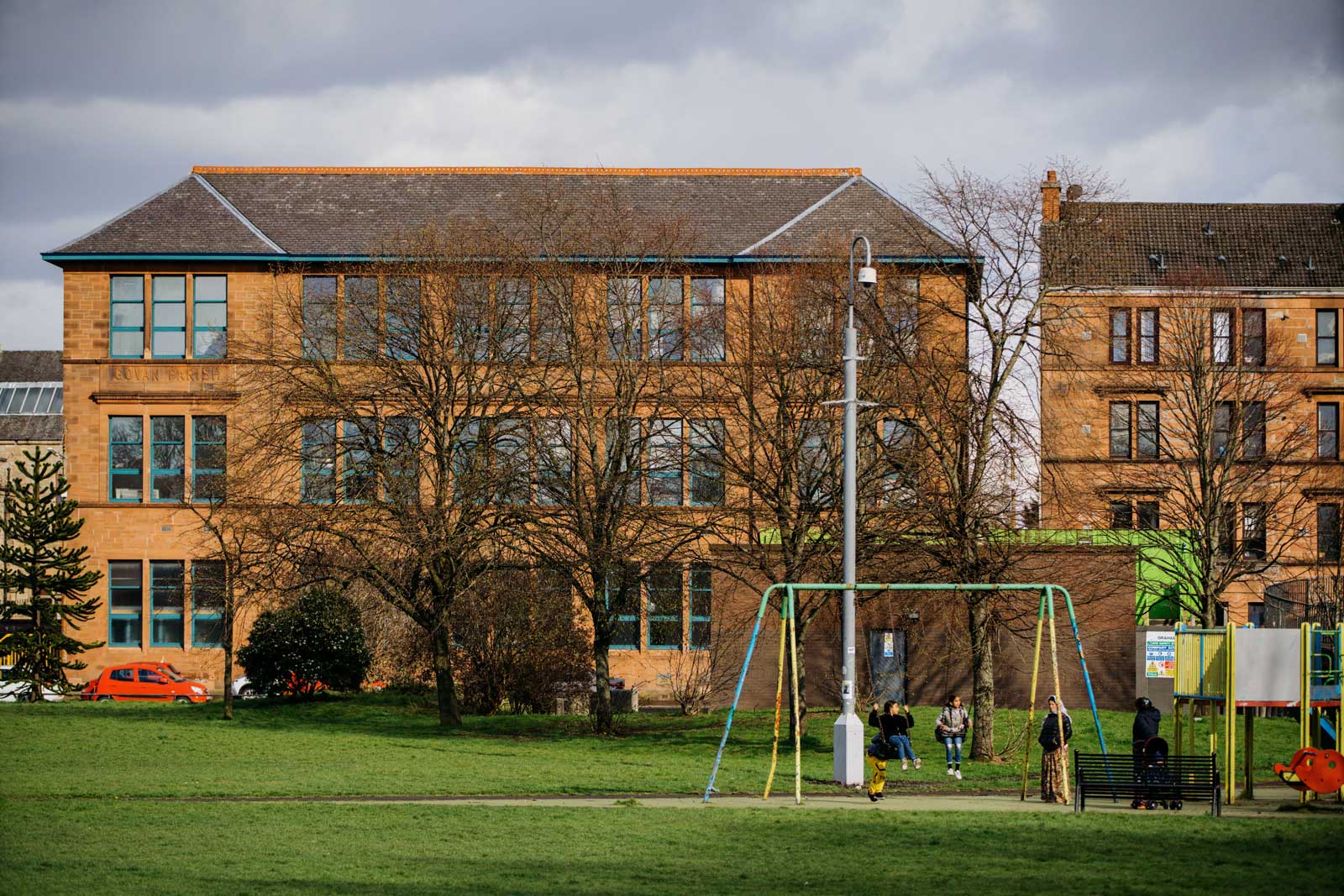 Formerly a school extension, Kinning Park, a typically Glaswegian, reddish Portland block was adopted by the local council as a neighbourhood centre, becoming a key childcare facility for local mothers in the 1970s. Following the council’s decision to close the facility in 1996, it was local women (including Scotland’s current First Minister, Nicola Sturgeon) who led the campaign to retain this community building.

Whilst the direct action resulted in the council handing over the keys for a token £1 rent, the precarity of continuous short-term leases resulted in the inability to secure funding for maintenance work, and the building (although now run by the community), was rapidly deteriorating. After 20 years, the community’s operating of the building without the appropriate support came to a close in 2015 with the passing of the Community Empowerment Act. This Act — which demonstrates Scotland’s propensity to embrace relatively liberal land rights — allowed the community the right to request an asset transfer from the local council,  which completely transformed the seeming fate of the Kinning Park Complex. 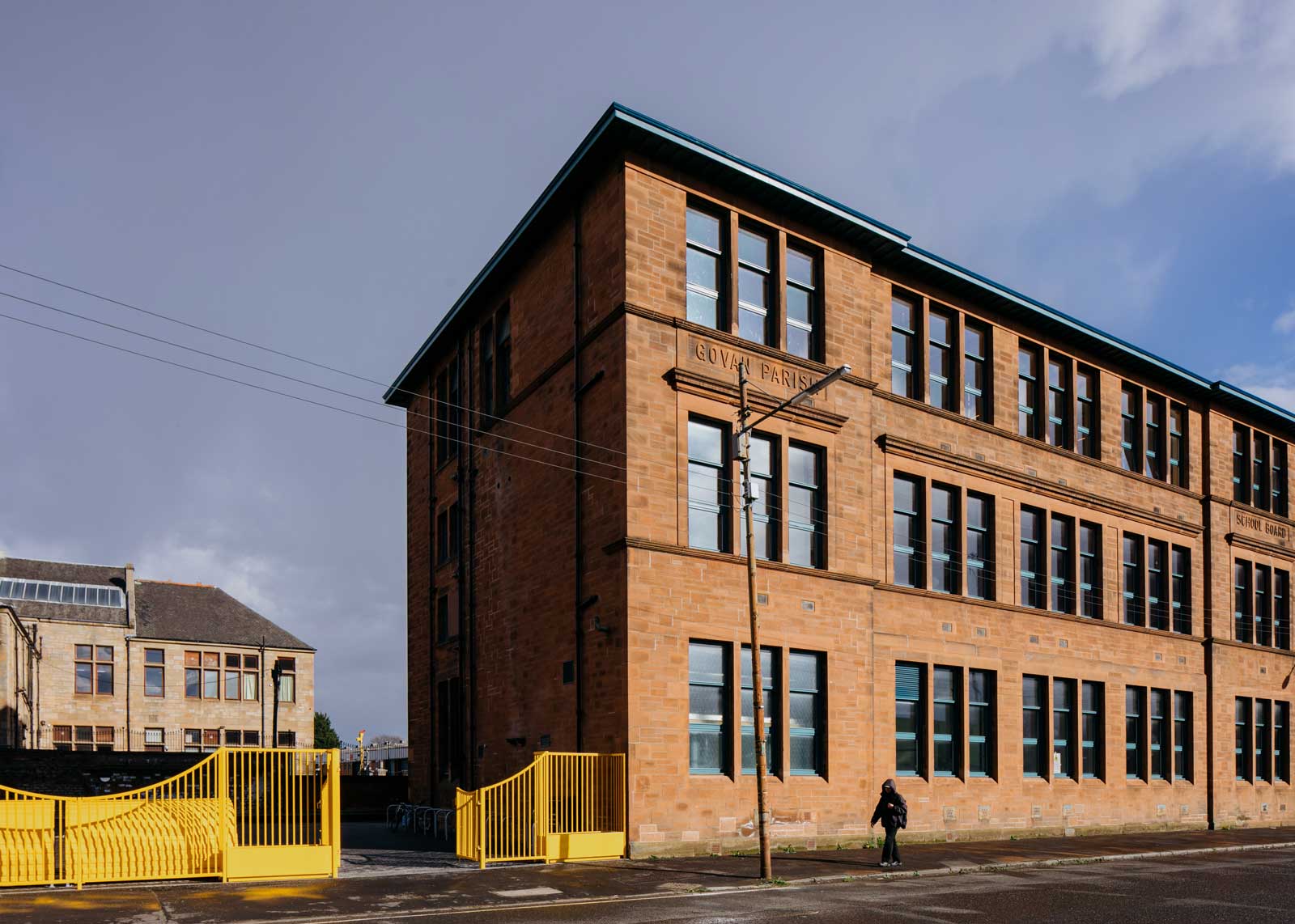 With this newly formalized agency, the community tasked New Practice to resolve the scale of disrepair on-site and facilitate the development of a functioning and economically viable space. The architects took on the project by balancing the restoration of the original Edwardian architecture with more playful, contemporary moves, all while allowing for the flexibility for the community to build their sense of ownership and continually identify with the building anew over time. 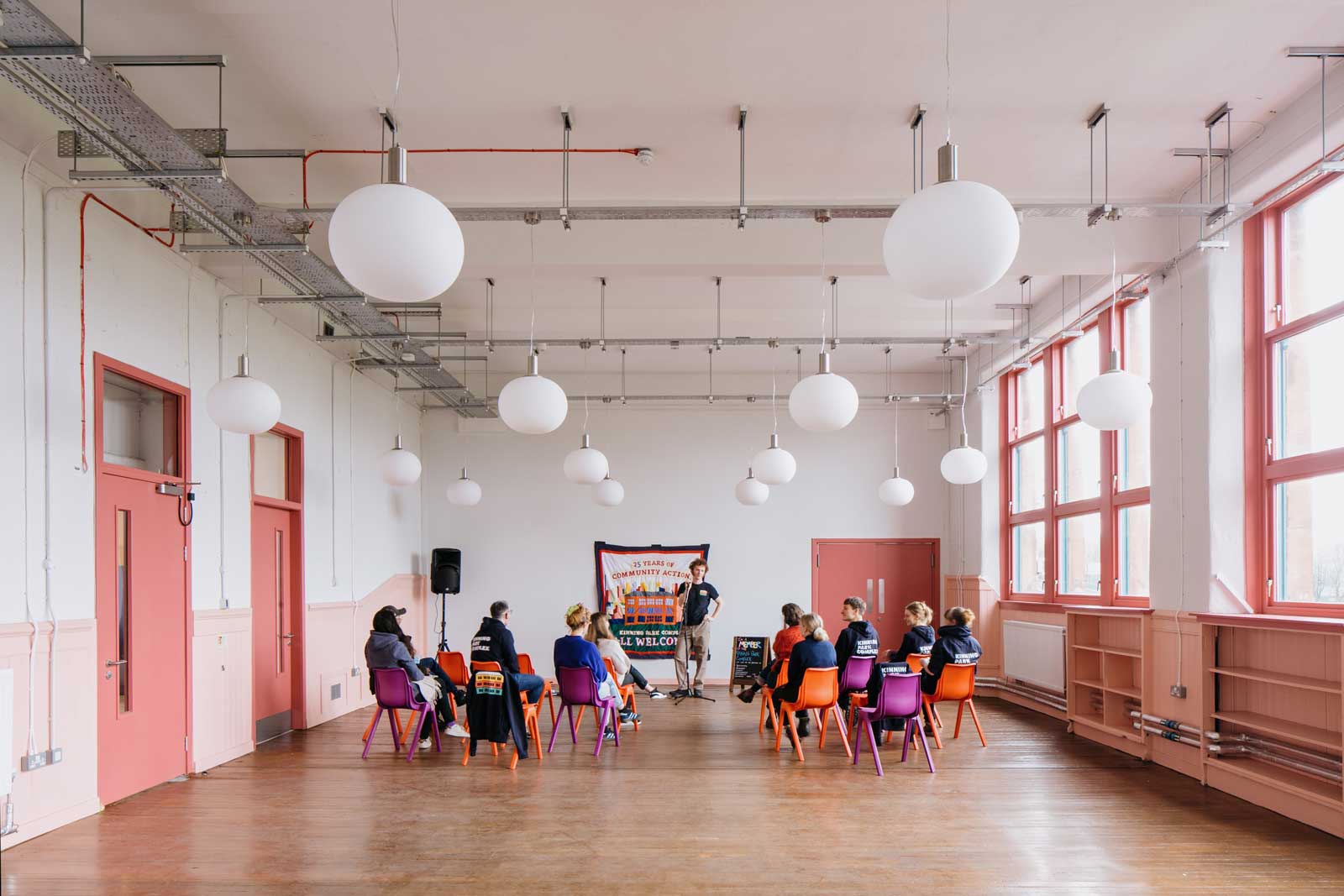 Right from the entrance, New Practice announces the project with a bright yellow railing and painted window frames. The use of bold colours continues inside, through a new wayfinding system that has been introduced to easily identify the different programmatic uses organized across the building’s floors. On the other side of the boys’ door (from Kinning Park’s previous life as a school), the ground floor is accented in blue. This floor is the most public-facing space in the complex, playing host to the reception area, a community hall, a large kitchen suitable for culinary study and events, a new meeting room and new restrooms.

Moving up through the building, the pink-clad first floor has a generous hall and studio, alongside a multi-use quiet room. Co-working spaces on the upper-most “yellow floor” are rented out to local businesses and organizations, an addition that has created a sustainable income stream for the building. Here, the largest (and most expensive) architectural move is hidden in the rafters, with the restoration of the roof allowing natural light into the building’s central circulation space. 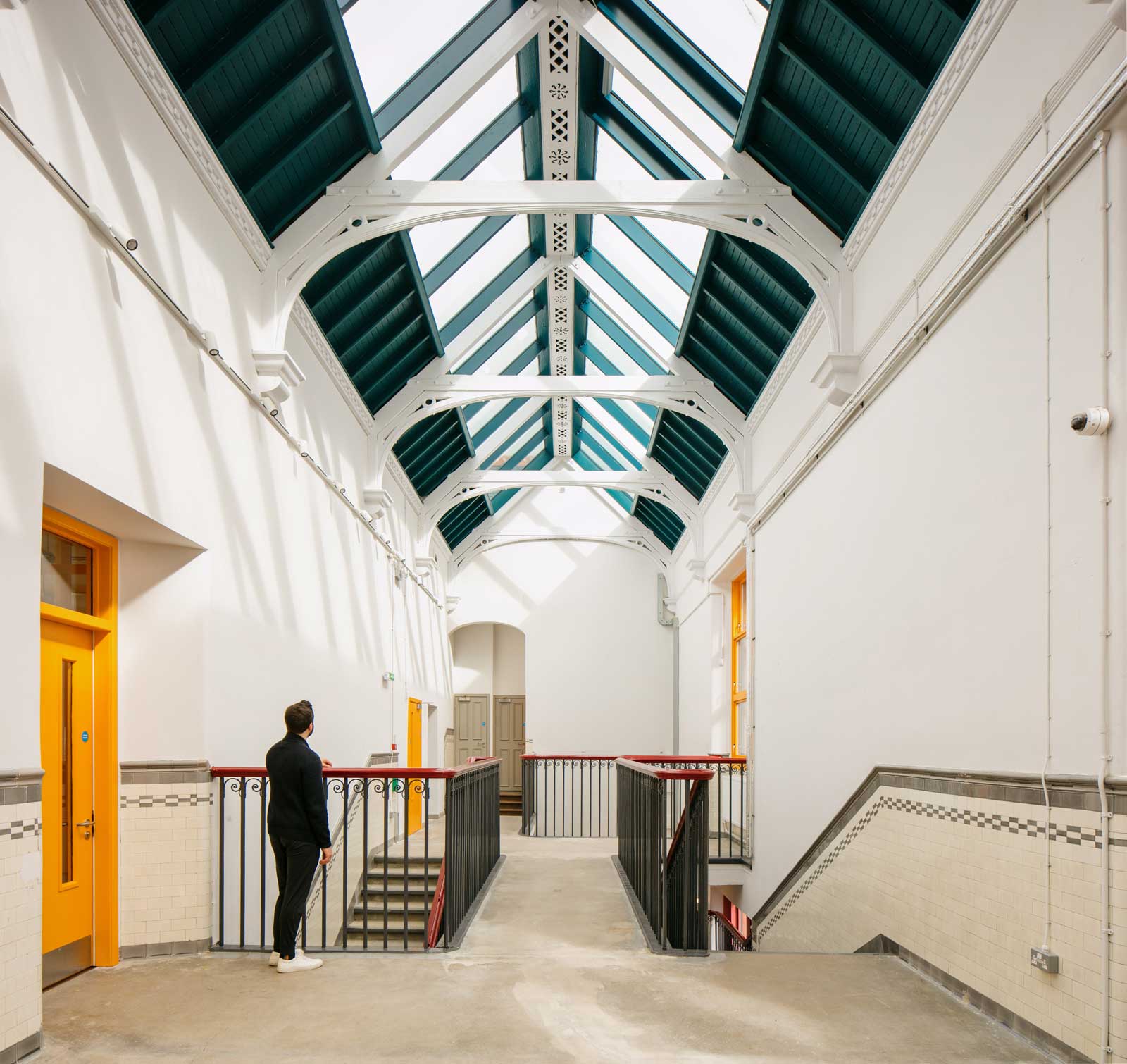 Investing the majority of the budget in a roof that doesn’t leak may not be particularly glamorous, but according to building manager Racheal, “having a building that works and not needing to empty buckets collecting leaking water frees up my time to think about what’s actually going on in the building.” Speaking to New Practice directors Marc Cairns and Becca Thomas who both have personal connections with the space — from attending raves to hosting birthday parties in the building — it becomes clear that their understanding of what the community needed is diligent and informed by experience. As a result, much like the history of the building, their new additions feel like they have been forged from an intimate and personable relationship with the space’s intended users. 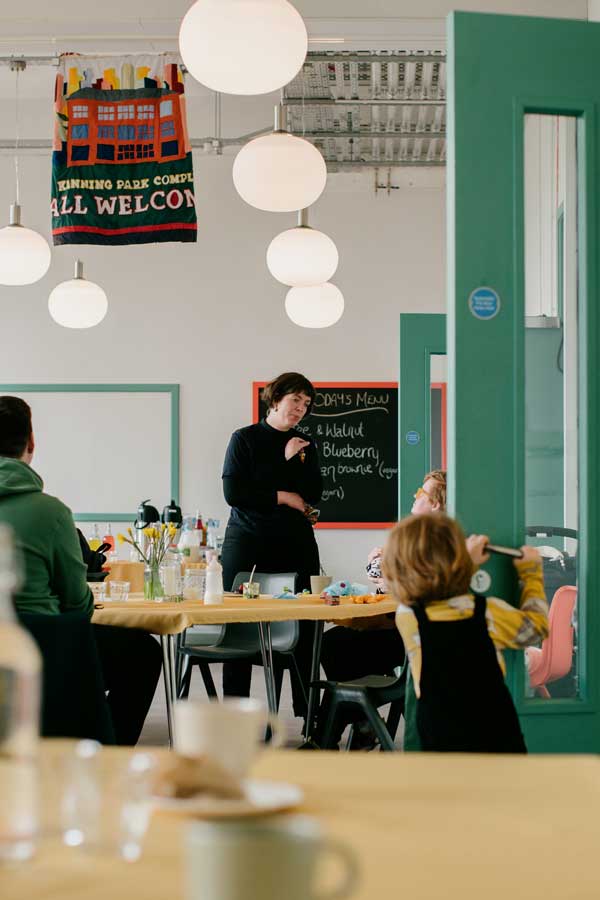 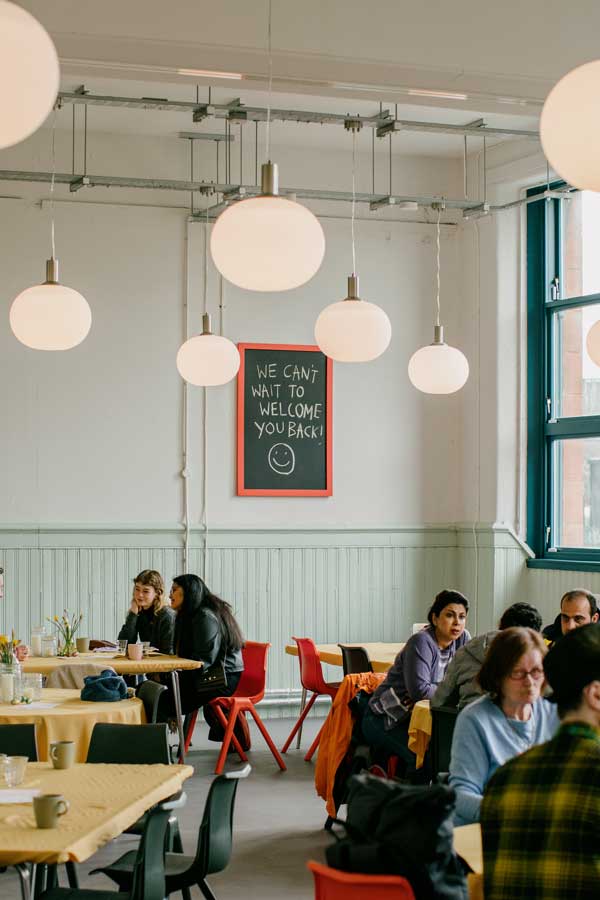 New Practice’s redevelopment has not only successfully restored the building to permit its users to be able to think beyond urgent maintenance, but their strategy for the project has allowed the community to dream bigger. New Practice went far beyond consulting with the community regarding what they wanted in the space and with their renovation has supported the community in wanting more. The new spaces provide the bare bones — an armature for people to rejig, appropriate and utilize. Visible in the spatial design, decoration and attention to the program, New Practice’s ethos for the project has been carried through into every detail, down to the specification of paint colours, fittings and fixtures, which were selected for their availability and affordability in order to ensure that the building can easily be repaired as needed. 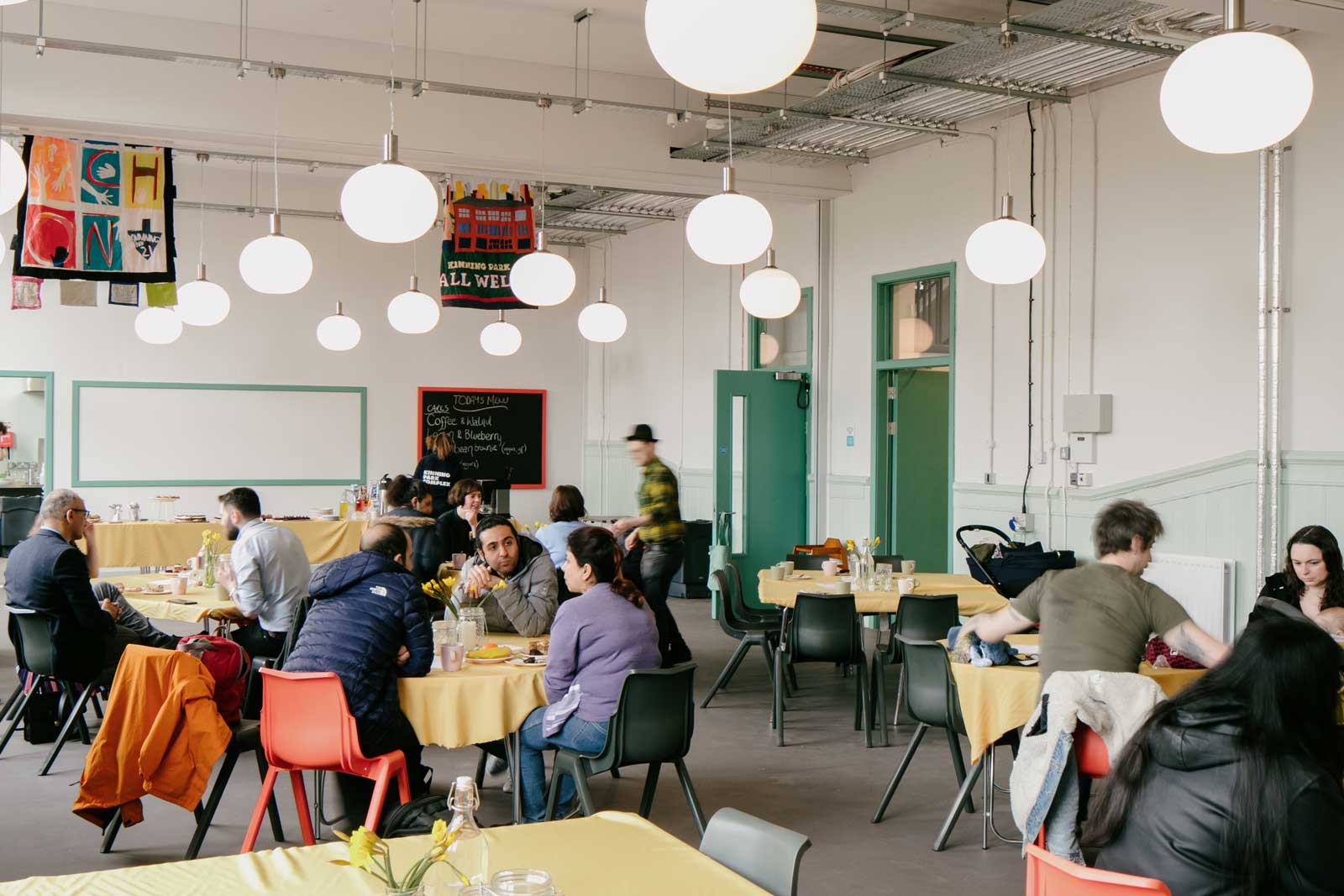 Visiting Kinning Park Complex revealed a flaw in our own expectations of a “completed” architectural project. The spaces felt unfinished but also thoroughly settled in. The architecture does not even aim to present itself as a fait accompli, instead, it aspires to be able to grow with its occupants, for whom the architects have left blank spaces to be filled in over time. New Practice’s light touch quietly but confidently restores the building to allow the occupants to continue their work. Thomas summarizes it best: “This is an extraordinary ordinary building.” Finding a community space whose future feels so secure in the building that they are in is increasingly rare. But to find a space that so seamlessly seems to have been adopted by its users should be recognized as a sure sign of a project’s success. New Practice’s renovation has given a notable legacy of activism a secure space in which to continue.

For their renovation of Kinning Park Complex in Glasgow, New Practice lightly intervened to create a usable, adaptable and sustainable space for the community.