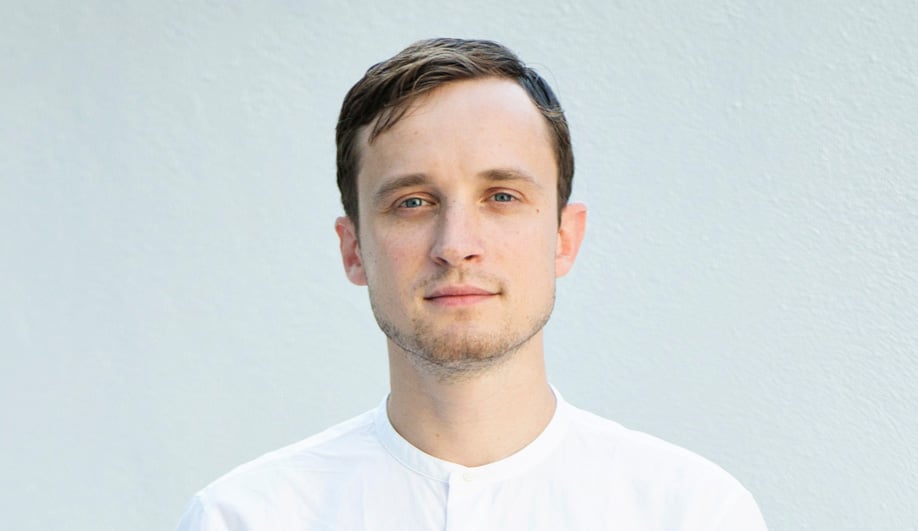 I don’t think of myself as a product designer, as such. I started out as a graphic designer so I’ve always been into colour, typography and anything printed. Materials are my medium now, but my approach is still very similar to graphic design. People know me for my glass objects, but I’m not strictly about glass. It has certainly been a subject of interest for me, but what I’m really interested in is exploring the ways I can change people’s perceptions of materials in general.

My fascination with glass started in 2011 when I was doing research for my graduation project at Design Academy Eindhoven. My idea was to create an optical illusion out of an everyday object, the mirror. I began looking at ways in which I could transform a flat surface, a sheet of mirrored glass, into something three-dimensional. The project combined wood with glass to create the illusion of a cut-out in the wall. Depending on where you’re standing, you either see a mirror or an oval opening. Most of my work lies somewhere between the two- and three-dimensional. I want to get people to touch things and wonder whether the colour is changing the shape of the object, or if the shape is actually meant to be that way. 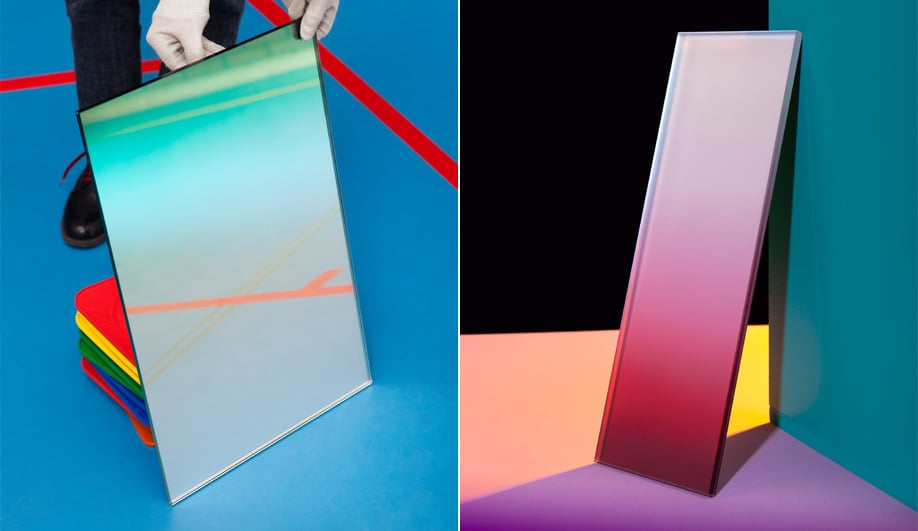 As seen in the Green Dawn Mirror and Red Dawn Misty Mirror, Ermičs’s use of colour often evokes experiences found in nature.

Glass is such a versatile material, but it has this reputation for being cold and fragile. I’ve always liked it, but didn’t necessarily want it in my environments; it’s meant to be invisible. I wanted to change that. I started by looking at the latest glass printing technologies but was a bit underwhelmed. Most of what I found was for decorative purposes – really cheesy stuff. I eventually teamed up with a local glass company, which gave me free access to its facilities and processing machines, and started experimenting. I spent about a year coming up with several pigmented glass finishes that I liked and wanted to make something with.

Research plays a big role in what I do. I’m always experimenting, exploring. In terms of material research, that’s where I begin my work. I don’t typically start with an object or shape in mind; that comes later. I think about how I can reinterpret a material and change it, producing something that I can really own. 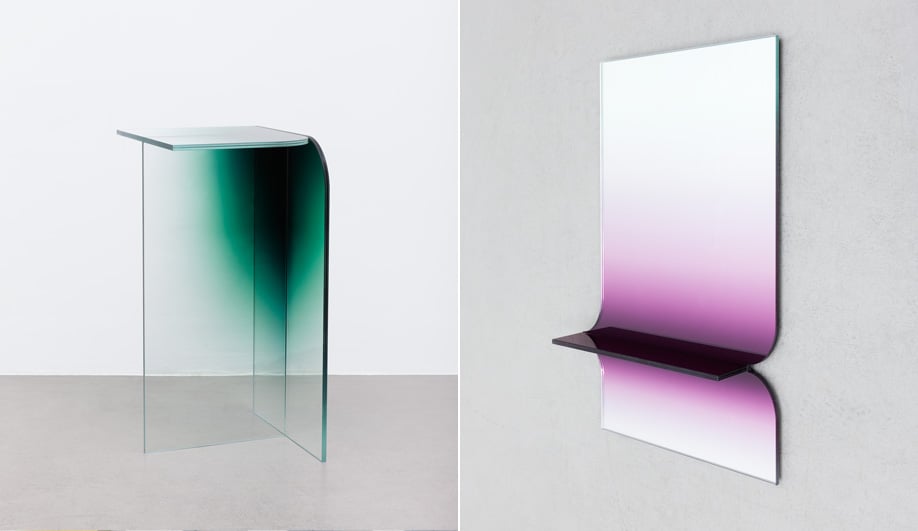 With the Shaping Colour series, Ermičs experimented with stretching, twisting and folding colour.

Colour is definitely the dominating force for me. A lot of people are afraid of it, but colour can really transform a space or how an object is perceived. We often see it as a last step in the design process, as just a finish. But, what if colour could be three-dimensional? What if we stretched it, turned it, folded it? Shaping Colour, which I began in 2015, is my attempt at answering these questions. I started by expressing colour with simple, linear shapes. As the project evolved, I began investigating new gestures. I presented the last two pieces of the collection, the Horizon Screens and the Ombré Glass Chair, at Rossana Orlandi, in Milan, last spring. 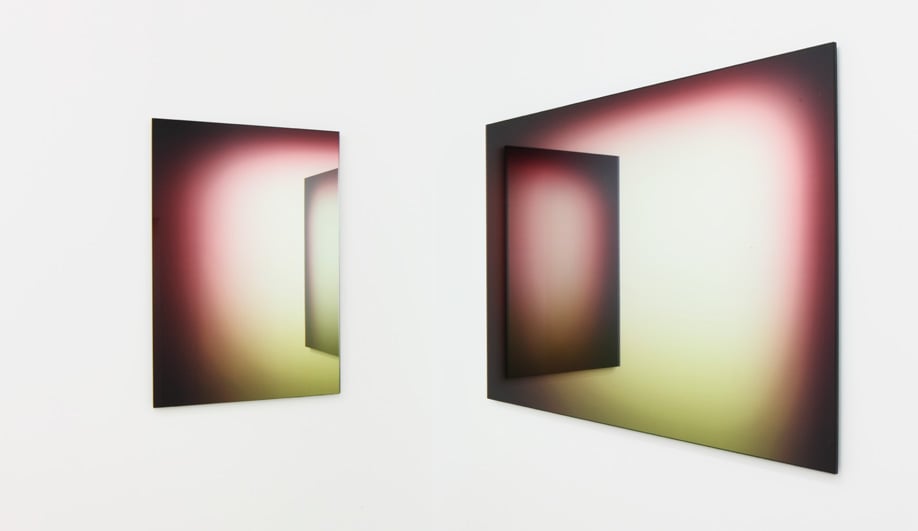 The pigmented Colourscape Mirrors were shown as part of the 2016 show Bois d’Origine, at Gallery S. Bensimon in Paris.

I don’t want to be “the glass guy.” I’m actually working with natural stone now as well. I started collaborating with the Dutch stone company SolidNature in 2016, and I’m working with them on a new project. I can’t reveal much at this point, but basically I’m looking into ways to enhance the material’s natural beauty through modern technologies. This is really at the centre of my work: How can we employ new technology and push the limits of the machine? Textiles are another material that’s all around us and that I’d love to explore.

I love collaborating with different companies and architects; quite often they challenge me to create something I may not have considered alone. Last year, the Miami architect Rene Gonzalez asked me to design a four-metre glass table, which is something I would never have attempted on my own. It’s crazy; the tabletop alone weighs over 500 kilograms. We’re working together again on Alchemist, a clothing store in Miami which opens soon. I’ve always got lots of projects on the go. 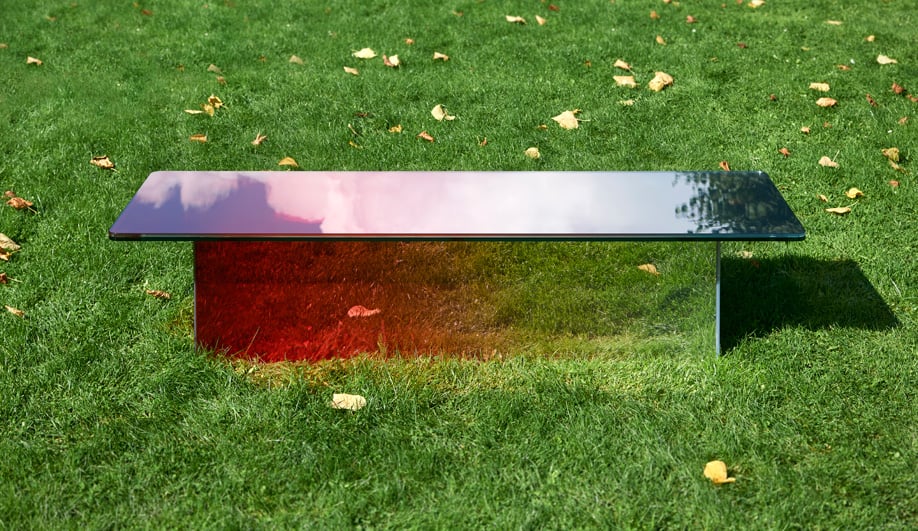 Shifting from red glass to mirror, this bench was a collaboration with Copenhagen studioIskos-Berlin for a 2017 exhibition at the Danish Museum of Art & Design.

I’m not against mass production, but I’m not interested in making 100,000 chairs; one is enough for me to express an idea. But it’s definitely an achievement to have your work recognized by an established brand. Last year I launched the Glimpses Mirrors with Editions Milano, and right now I’m in the early stages of talks with two furniture brands. Nothing’s confirmed yet, but it would be an interesting opportunity for me to change the type of work I do. I don’t really have a plan for where I want to go with my work; I take things as they come. When I was younger I was headed for a career as a professional hockey player, until I got injured, which led me to design. So my entire career is unexpected. And that’s the challenge for a designer; you need to keep surprising people. germansermics.com