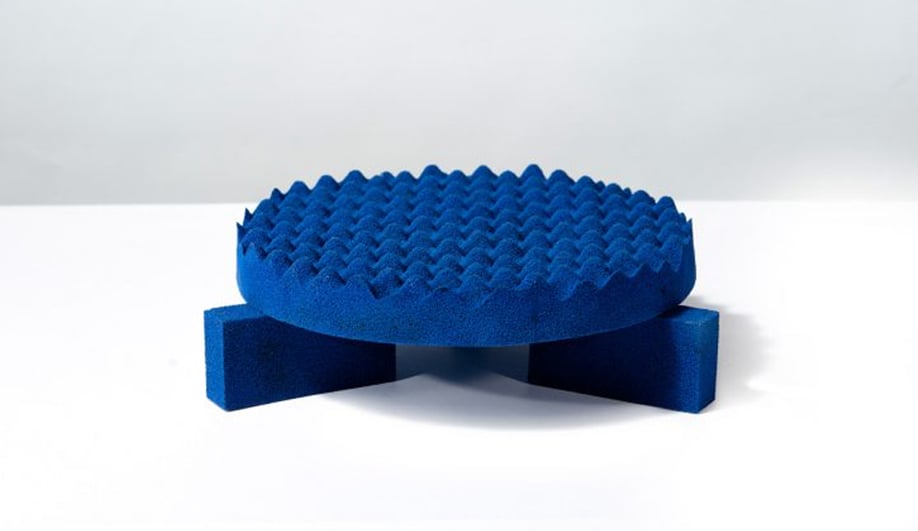 London Design Festival’s love for experimentation in design has teased out a number of studios exploring natural materials, from mushrooms to acid made from steel nails hammered into oak.

A design fair is mainly about furnishings and accessories made from such familiar palettes as wood, glass, marble and leather. But the annual London Design Festival (which Azure has been covering) would get tedious fast if it weren’t equally about the stuff that defies that limited description. Since the age of punk, Londoners have been willing to live with things of a more jolie laide nature, the kind of aesthetic that stops you in your tracks upon discovery that what you are looking at is something quite different from what you thought you were seeing. 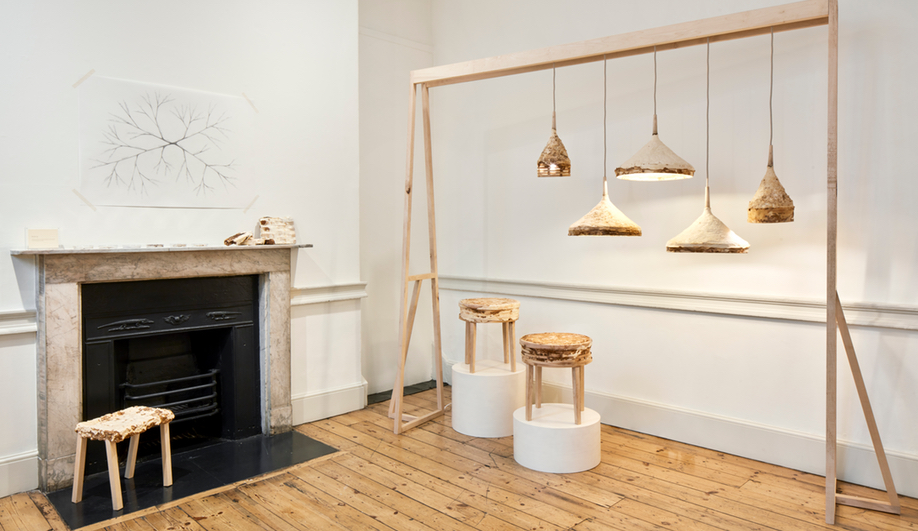 Sebastian Cox and Ninela Ivanova’s lamps and stools are made with fungus. They’re on display at the London Design Festival.

That is not to say some of the most recent and remarkable experiments in new materials aren’t beautiful. It’s just that nobody was coming out of a group exhibit like Design Frontiers – a display of progressive, boundary-pushing design on view at Somerset House ­- feeling the domestic goddess vibe. 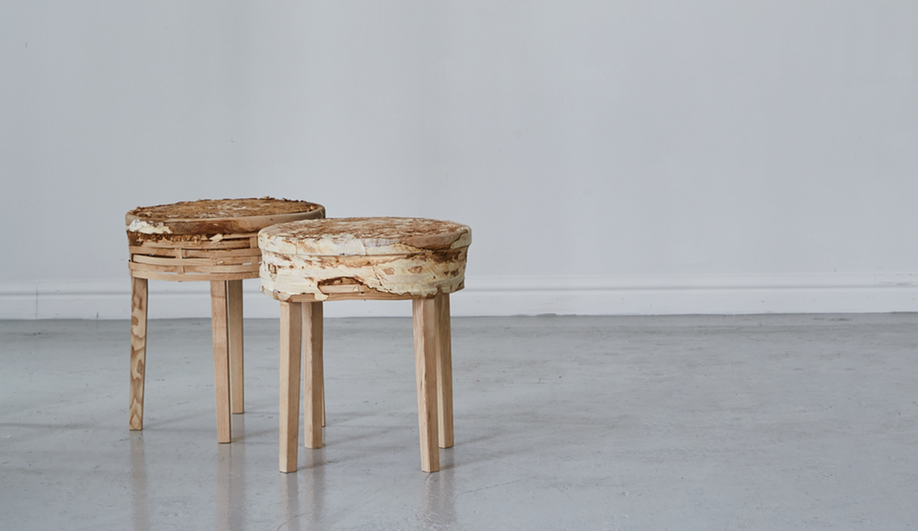 As just one example, in the “raw furniture” room at Design Frontiers, an installation by local designer-researchers Sebastian Cox and Ninela Ivanova was on display with lamps and stools made partly from mushrooms. The duo harvested goat willow wood from Cox’s own garden and shredded it into moulds shaped like pendants and seats, adding to the objects a fungus called fomes fomentarius.

The ingredients took things from there, growing into the desired shapes while bonding beyond the performance of any wood glue. The end products are super-resilient, naturally flame-retardant, water-repellent, spore-free. If too crude for some tastes, the pieces redeem themselves in being entirely compostable. 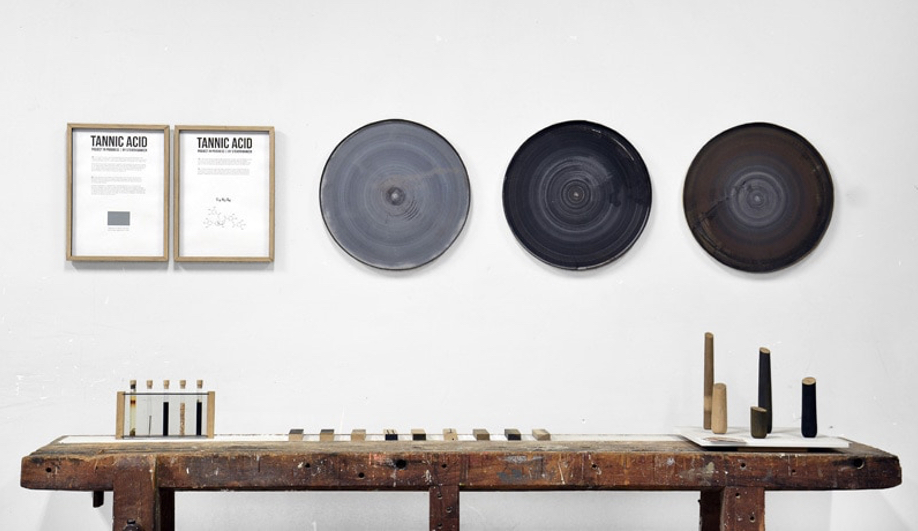 Steven Banken, whose Tannic Acid series is being shown at the London Design Festival, injects oak with liquid steel to produce inky-blue tabletops and shelves.

In the eastend of the city, Steven Banken anchored the Dutch Stuff show with his Tannic Acid furniture series. Defying the advice of his carpenter grandfather – “Never use steel nails in oak,” lest the wood, rich in tannic acid, turn the colour of a bruise – Banken hastened the process instead. He took boxes and rounds made from aging oak and injected them with liquid steel to produce inky-blue tabletops and shelves. Then he did the reverse to his steel furnishings, infusing them with tannic acid and red iron oxide, giving them a similar effect, and creating beautiful results. 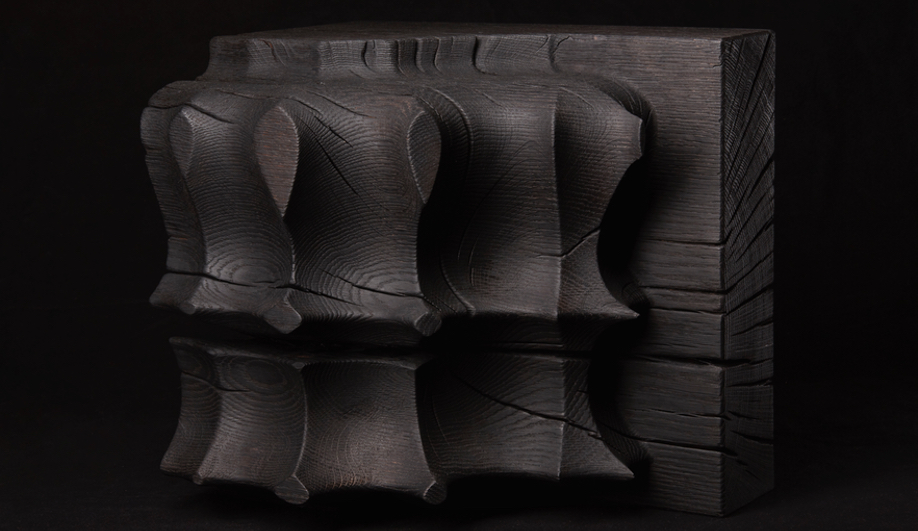 Shou sugi ban is the technique Gareth Neal uses to give his wood sculpture their darkness.

The Wood Awards booth featured the shortlisted Ancestral Fossil by Gareth Neal, a craftsman experimenting with digital design and the Japanese technique of shou sugi ban, or wood-charring. Neal took blocks of centuries-old green oak and carved them into classical, serif-shaped artifacts using a six-axis CNC router, bridging centuries of technique in a single piece. 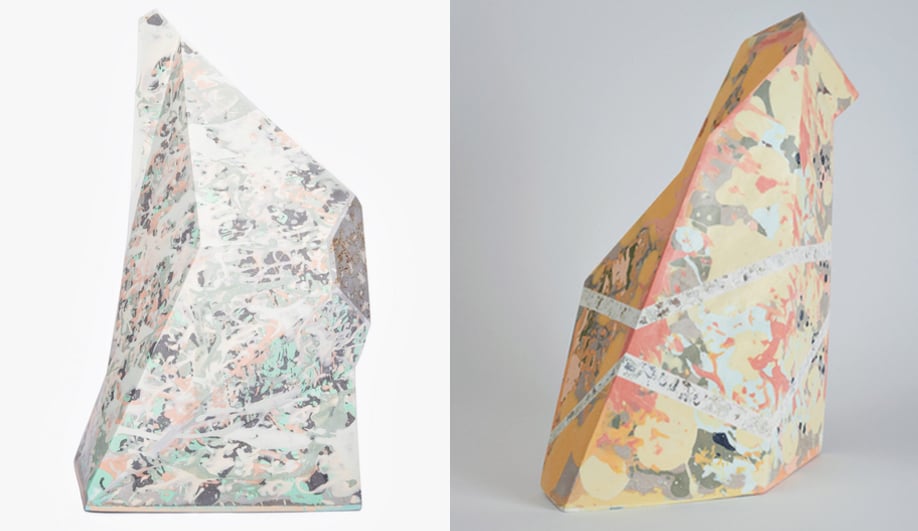 Zuza Mengham’s polished objects are made of an acrylic-gypsum-resin composite.

Process played an enhanced role in the development of emerging materials – like Jesmonite, the acrylic-gypsum-resin composite that dominated one end of the London Design Fair. Designer Zuza Mengham headlined the Material of the Year exhibition with her multifaceted Jesmonite sculptures layered with strands of British lichen to create a sort of organic inlay. 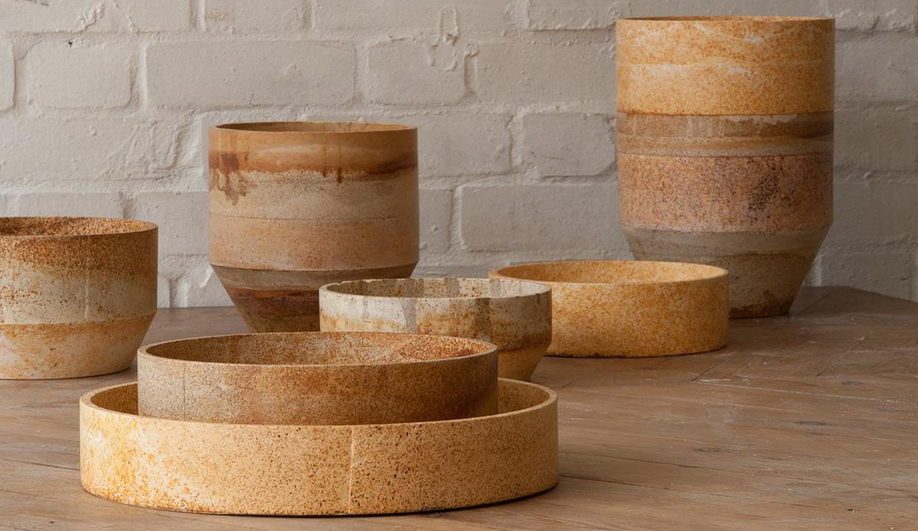 And in an old stable in South Kensington, the young design practice Studio Furthermore presented Tektites, a collection of sponge-textured “ceramic foams” made from a high-viscose clay called parian. The duo soaked masses of open-celled foam with parian slip. In the kiln, at temperatures above 1200ºC, the foam disintegrates, leaving just the hardened clay, in forms resembling meteorites. 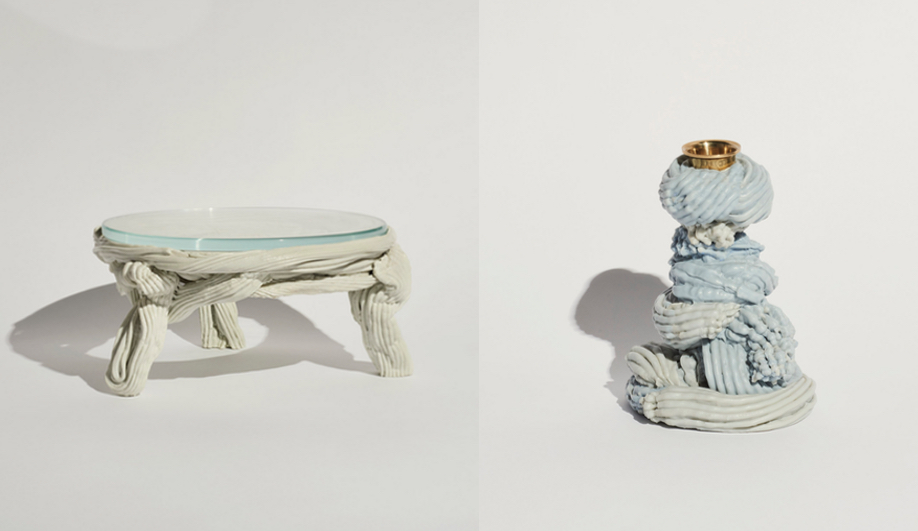 James Shaw’s Plastic Baroques are made using a glue gun.

Barring the new Kartell flagship on Brompton Road, which celebrated the 50th anniversary of its ubiquitous Componibili storage system, there seemed to be a consensus that straight-up plastic wasn’t a viable material any more. At Ready, Made, Go, an exhibition at the Ace Hotel in Shoreditch, Royal College of Art graduate James Shaw made an impact with his Plastic Baroques. His patented technique requires a homemade hot glue gun to melt recycled plastic and spit it out like toothpaste. The finished tables and candlesticks seem alive in the literal sense.