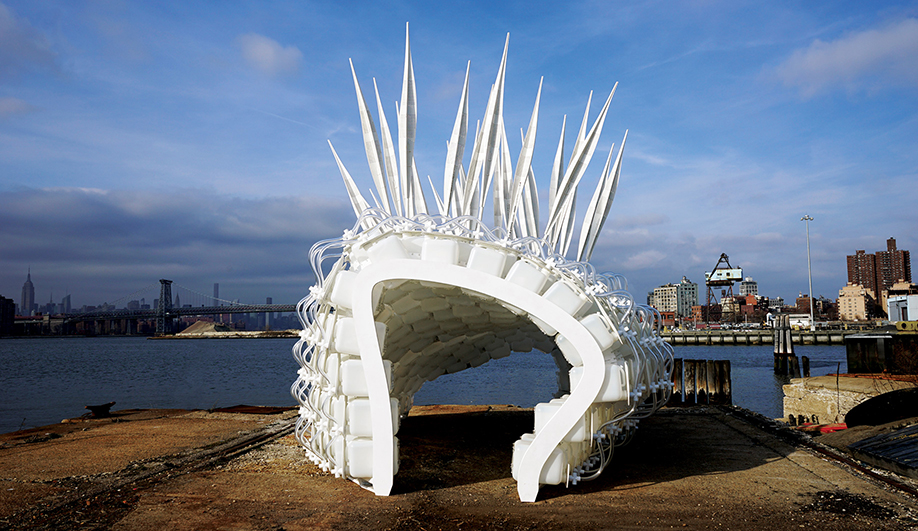 I once had a young neighbour who raised crickets (to feed his lizard) on the ledge outside his window, and every night I fell asleep to the comforting sound of cheerful chirping. Housing 22,000 of these singing critters, the Cricket Shelter by Brooklyn non-profit architecture group Terreform ONE is also about comfort – and food.

Designed to provide a low-carbon source of protein, in a compact structure that doubles as post-disaster housing, this modular insect farm looks like a sci-fi movie prop: an exoskeleton of interlocking pods topped with a mohawk of spiky fins. The prototype spent a couple of months at Brooklyn’s Navy Yard, and in September it heads to Florida to begin a tour with Survival Architecture and the Art of Resilience, an exhibition exploring emergency shelter.

These crickets are probably the most coddled insects on the planet. All of the infrastructure needed to provide them with a free-range life has been taken into account, including sex pods and birthing areas. “It’s important that they have a good life and are treated properly,” says lead designer Mitchell Joachim.

However, as any farmer knows, livestock inevitably leads to dead stock: after six to 12 weeks (a cricket’s natural lifespan), the insects are delivered to a chef, cooled down so they go into hibernation, then ground into flour. The team is experimenting with flavour engineering, feeding the invertebrates a bespoke diet of orange peels, apple cores and lime rinds in an effort to add a fruity flavour to the powder. An upcoming culinary adventure includes gut-loading the crickets with vodka, on the principle that insects might be more appealing to the North American palate when there’s alcohol involved. Chances are, the drunken crickets will be even happier, too.

Lorraine Johnson is the author of City Farmer: Adven­tures in Urban Food Growing and editor of Ground: Landscape Architect Quarterly. She ate crickets once, in Mexico, and found them tasty.