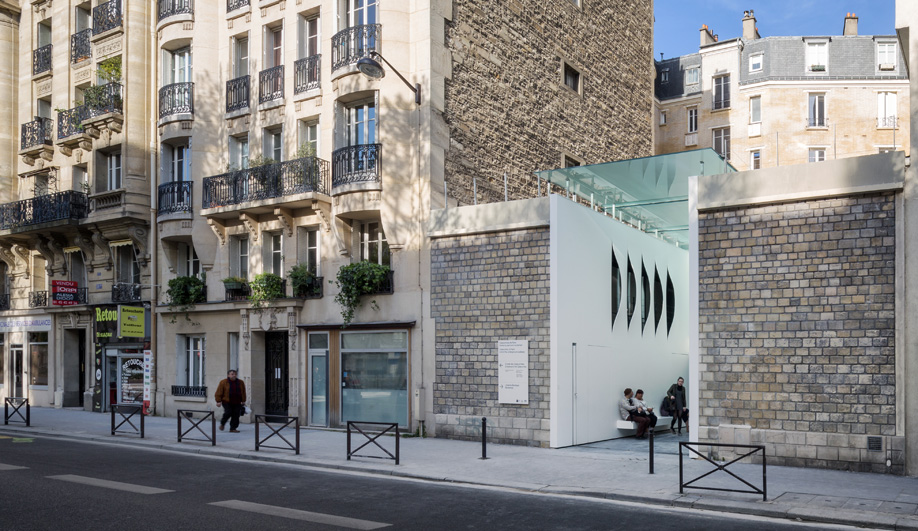 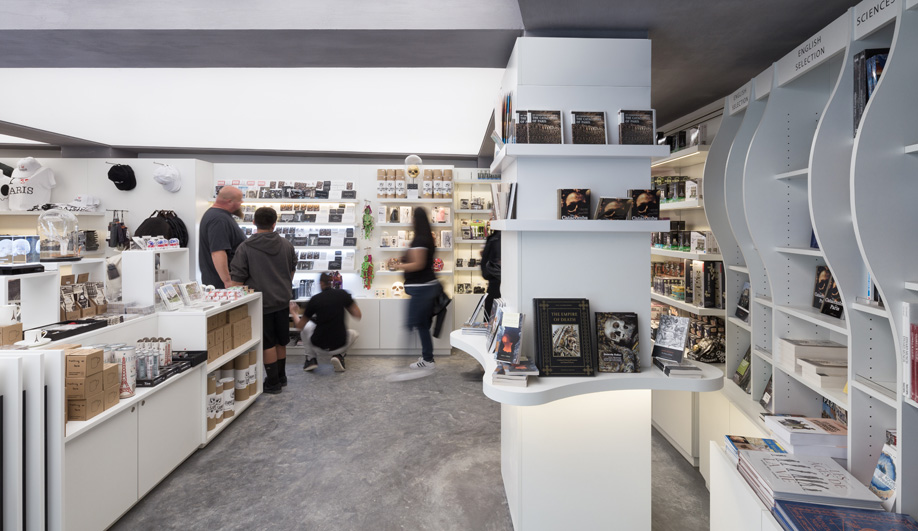 Yoonseux’s scheme also adds a gift shop to the popular attraction. Visitors don’t exit through the gift shop, but can choose to enter on their way through the urban plaza. 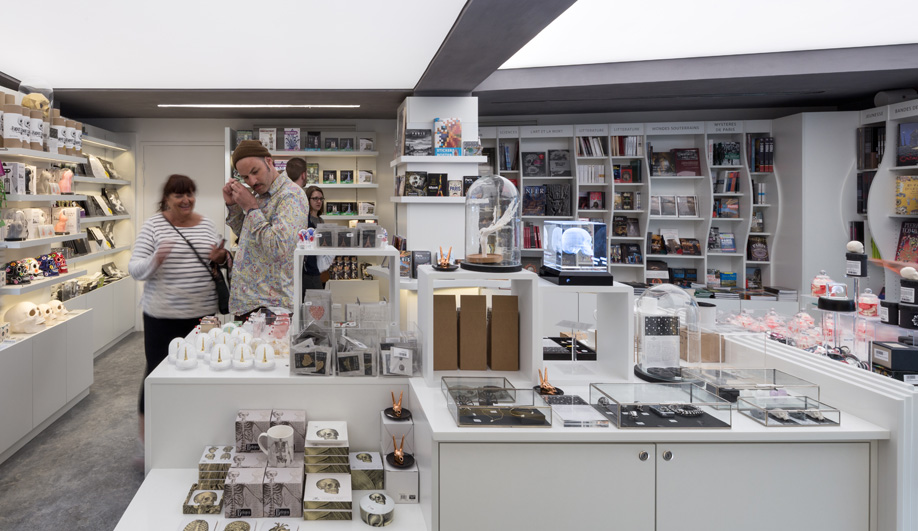 The 50 square metre interior of the gift shop relies on a neutral white palette, pairing it with the minimalism of the all-white plaza. 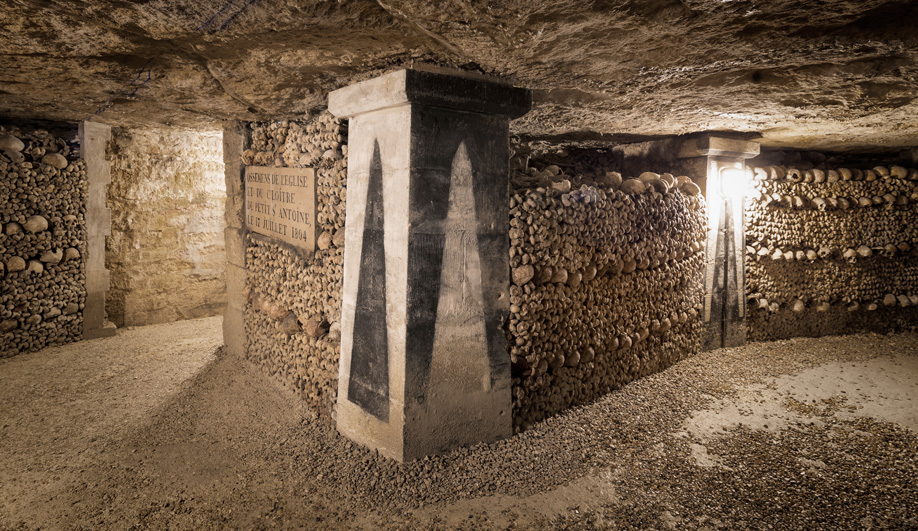 The tunnels of the Paris catacombs were excavated centuries ago. In the late 1700s, remains were relocated here from two local cemeteries: Cimetière des Innocents, and Saint-Eustache. 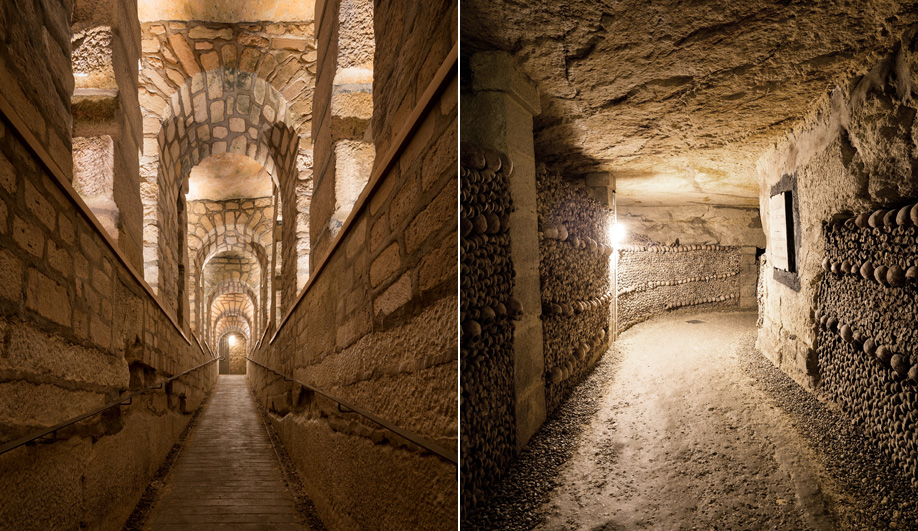 The underground catacombs use minimal illumination, for the protection of the remains. Emerging from the darkness of the tunnels to the light of day was once a jarring experience. 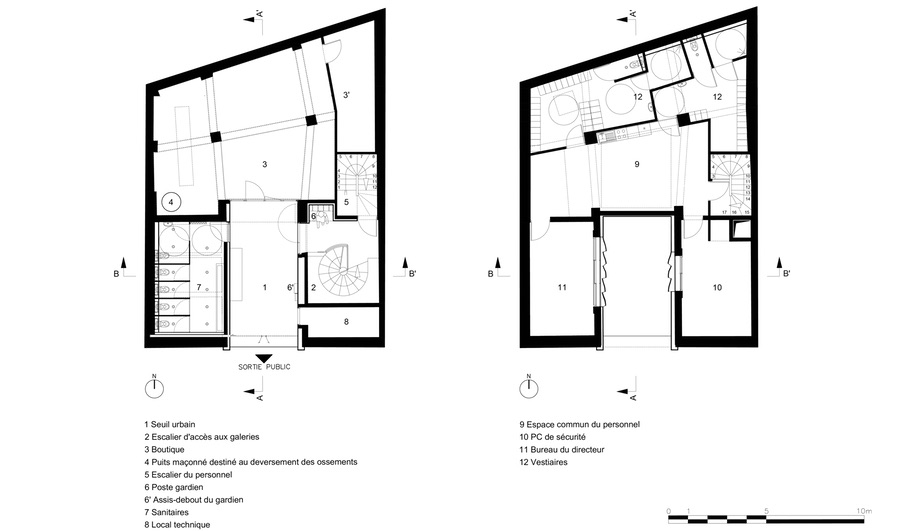 Even in a place as rich in history as Paris, the Catacombs are a see-it-to-believe-it feature. Despite this, the underground ossuary is considered one of the city’s best-kept secrets – thanks, no doubt, to its literal obscurity: located underground, it’s hidden completely out of sight.

Yoonseux Architectes is helping to address that obscurity with a new seuil urbain: a small courtyard at the exit where, not long ago, there was nothing more than an old stone wall with an unmarked door that spat tourists directly onto the sidewalks of an unremarkable Paris side-street.

Today, Yoonseux’s transitional space helps ease visitors between the two extremes. Where once there was only an unmarked door that deposited tourists onto an unremarkable sidewalk, there is now a plaza where visitors can pause and re-acclimate to the city.

The story of Yoonseux’s exit begins seven centuries ago, when quarriers began mining for the limestone used to build Paris’s renowned architecture. Over time, a network of tunnels spread across the Left Bank. In the late 1700s, during an acute shortage of burial space, the remains of over 6 million people were relocated from two major cemeteries – Cimetière des Innocents and Saint-Eustache – and arrayed along roughly two kilometres of the tunnel system.

Today, the Catacombs draw over 700,000 tourists a year. Until now there has been very little to mark the tunnel’s entrance (only a modest, classically-style entryway shows visitors the way in), and nothing at all to identify the exit, several blocks south. Thus anyone climbing the spiral staircase up from the darkness of the catacombs would abruptly emerge in an unfamiliar place far from the city’s grand boulevards – an experience that was both disorienting and anti-climactic.

The plaza’s walls are lined in sleek white Corian, camouflaging the doorways in and out. Three-metre-tall slits in the Corian panels offer views from the second-storey spaces.

Finally, the Catacombs have an exit worthy of the history secreted below. Besides making the exit identifiable from the street, Yoonseux’s courtyard eases visitors’ transition from the dank, narrow tunnels to the brightness of outdoors. “We wanted to create an intermediate moment between death – the catacombs – and life,” says Philippe Yoonseux, who leads the firm along with his wife Kyunglan. “A return to daylight, after having traversed, twenty meters below, the largest ossuary in the world.”

To build this transitional space, the architects first had to reclaim the space, by converting a utilitarian security checkpoint into a more pleasing outdoor area – a feat accomplished in a single month. Now, rather than depositing guests unceremoniously onto the sidewalk, the 30-square-metre outdoor enclosure offers a decompression zone that still feels like a part of the Catacombs’ experience. But, in contrast with the ancient stone of the claustrophobic tunnels, the courtyard has a polished concrete floor and seamless walls of white Corian. A frosted-glass awning suspended above the soaring double-height space floods the space with soft natural light.

Three white doors, flush with the walls and free from hardware, are camouflaged in the Corian lining. One leads up from the catacombs; when emerging from this door into the courtyard, the glass doors to the gift shop lie to the right, the street is to the left, and the washrooms are directly ahead. (The third hidden door leads to a mechanical space.) A cantilevered bench offers a place to rest without disturbing the spartan formality.

Each of the window slits is a slightly different shape. Here, the slits direct views from the second-floor directors office towards the street.

One gesture breaks this minimalism, though: eight slits resembling a shark’s gills, five on one side and three on the other, slice open the Corian panels. These three-metre-tall slits, ranging from 60 to 80 centimetres wide, open up the second-storey spaces, which include the directors’ office and a security room, to views towards the street.

“Corian is a monolithic material,” Yoonseux says. “It’s rigid enough that it doesn’t require an internal framework, and malleable enough that we could precisely shape the carved incisions.” After researching and testing acrylic resin models to arrive at the final form, the panels were made from back-to-back sheets of Corian, which keeps the internal and external surfaces identical, and amounts to a thickness of 2.4 centimetres.

The gift shop’s luminous ceiling u2014 a back-lit suspension ceiling by Barrisol u2014 is intended to mimic the look of the frosted glass canopy in the plaza just outside.

Yoonseux also did the 50-square-metre gift shop interior, which is similarly finished, with minimal white MDF casework and a few curves thrown in to echo the gill-like apertures outside. Its most striking feature floats overhead: a suspended fabric ceiling by Barrisol, backlit to recreate the effect of the opalescent frosted-glass awning.

“The formal restraint of this project makes it possible for people to detach from the emotional charge of the ossuary,” Yoonseux says. “The whiteness of the incised walls, the influx of natural light following its absence, and the surprising volume of the exit all contribute to the sense of an ‘in-between’ space, before visitors re-emerge onto Avenue René-Coty, and into Paris.”

SHARE
Twitter, Facebook, LinkedIn, Pinterest, Email
TAGS
Architecture, Cultural,
AZURE is an independent magazine working to bring you the best in design, architecture and interiors. We rely on advertising revenue to support the creative content on our site. Please consider whitelisting our site in your settings, or pausing your adblocker while stopping by.