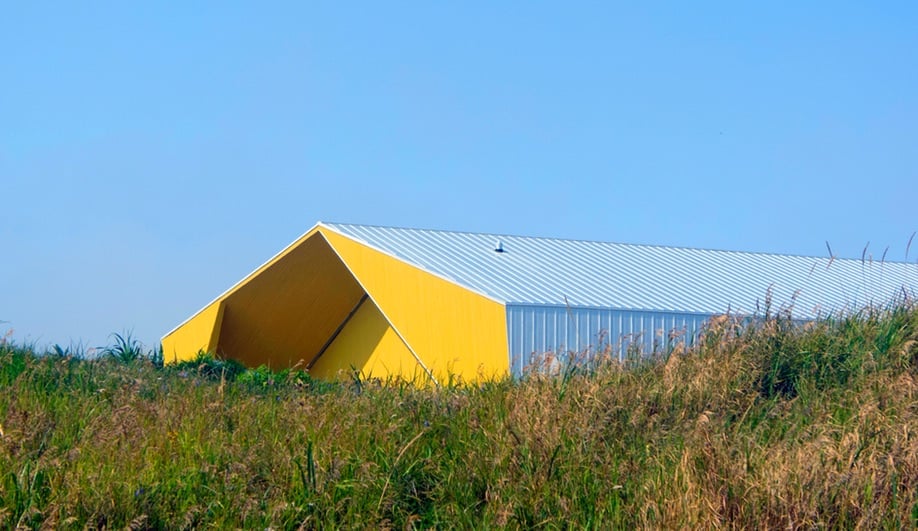 Nunavik, a largely Inuit region in Quebec’s north, is vast. At nearly 445,000 square kilometres, it’s a territory roughly the size of Sweden, with a population of 10,000 spread across 14 communities. Still, far-flung communities travel great distances to meet, which is why gathering places – like Nunavik’s brand new Kuujjuaraapik cultural centre – are critical. 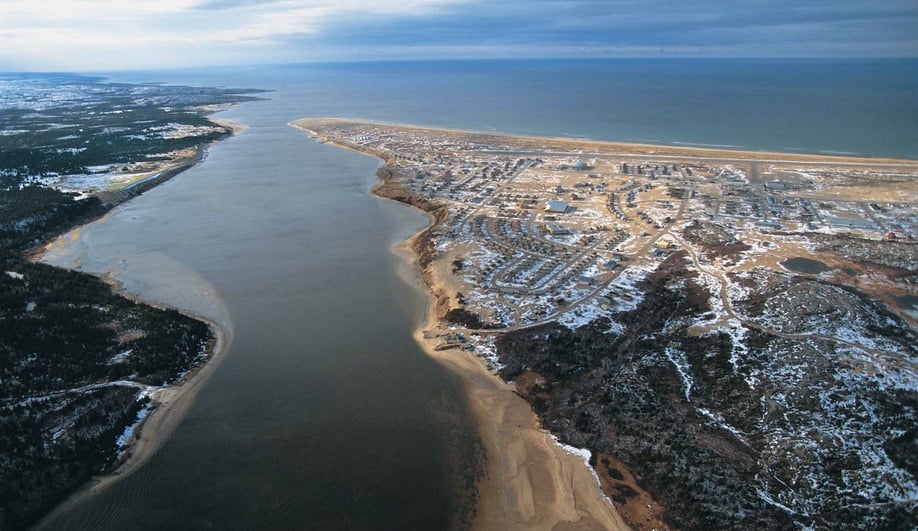 Sitting just north of the 44th Parallel at the mouth of the Great Whale River, Kuujjuaraapik is uniquely gorgeous. The 800-person Inuit village is surrounded by rocky terrain which transforms into sand dunes – a rare sight in the Arctic. Here, facing the Hudson Bay’s open seas, sits the 680-square-metre Kuujjuaraapik Cultural Centre, designed by Montreal’s Blouin Orzes architectes. 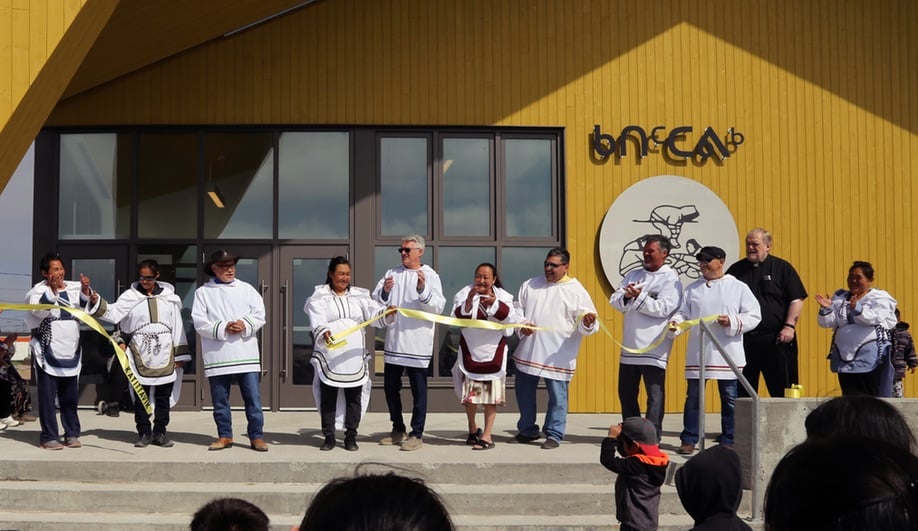 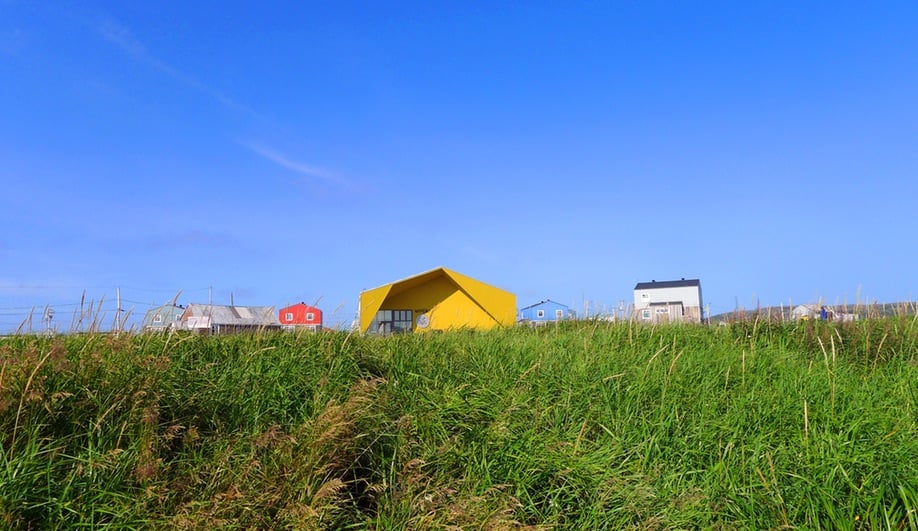 The first thing one notices upon approaching the cultural centre is its asymmetric facade. Painted golden yellow – a colour inspired by the nearby sand dunes – the geometric form rises above its largely flat surroundings, acting as a beacon. It’s inspired, says Blouin Orzes, by the form of an iceberg, a common sight in Hudson Bay. “The slightly lopsided one-and-a-half-storey exterior volume seems to have been shaped by the strong winter winds,” the firm says. 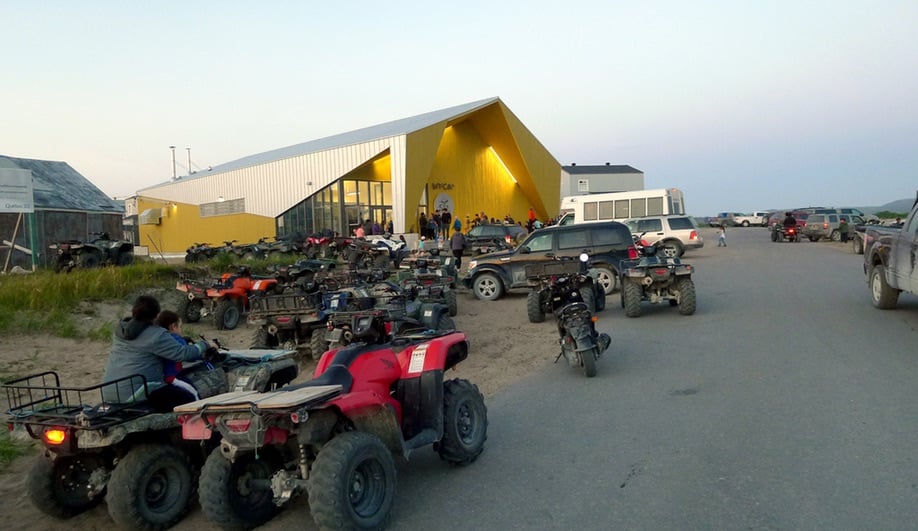 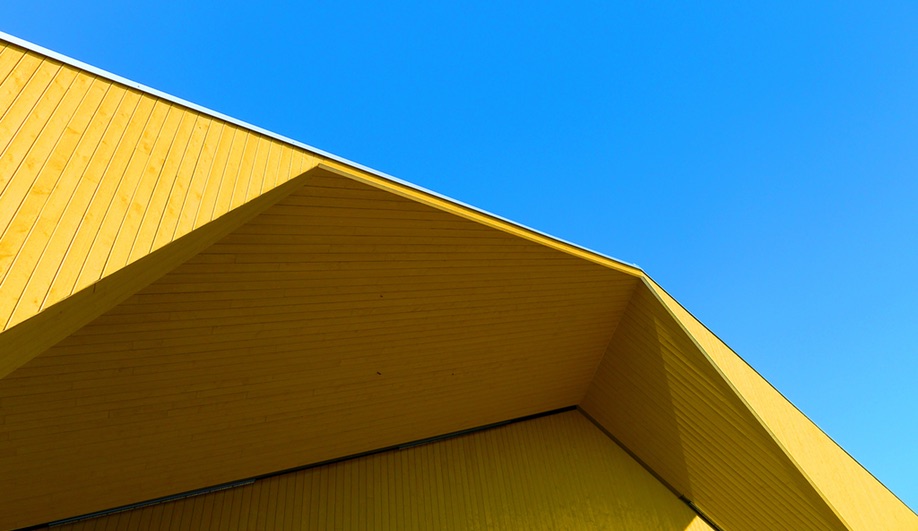 Beyond the building’s eye-catching form, many of the centre’s features were designed to withstand the sub-Arctic climate – winters here are long and frigid, with mean temperatures landing below -20° Celsius during the coldest months. The cladding consists of pre-painted wooden planks, while the rest of the building’s exterior is made from steel panels. A concrete ramp draws visitors to the building’s window wall, which, due to high cost of heating, is the cultural centre’s only large opening.

Blouin Orzes also designed a teepled entrance portico, a nod to a neighbouring church (below right), which is one of Kuujjuaraapik’s oldest buildings. 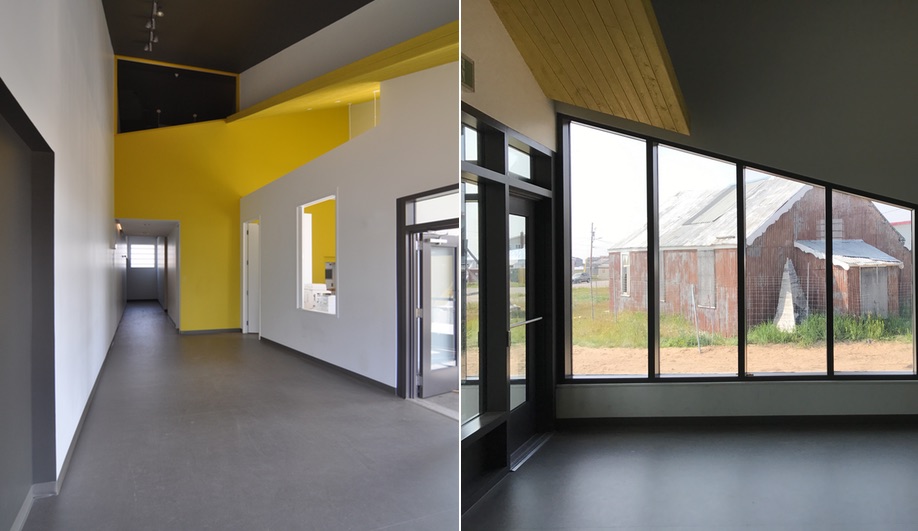 The lobby leads visitors to the cultural centre’s main attraction: the main hall, which can accommodate 300 people. Telescopic bleachers ring the room, while a floating platform serves as the centre’s control booth. With translation and videoconferencing facilities on-hand, the flexible auditorium can be used for gatherings, film screenings, concerts or banquets. It was originally planned as a home for the Inuit Games, but the Montreal Symphony Orchestra will perform there next September, too. 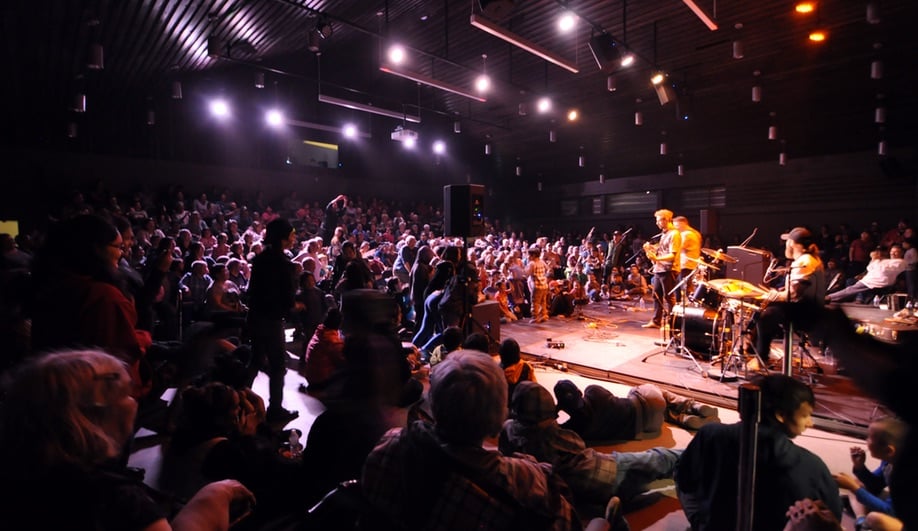 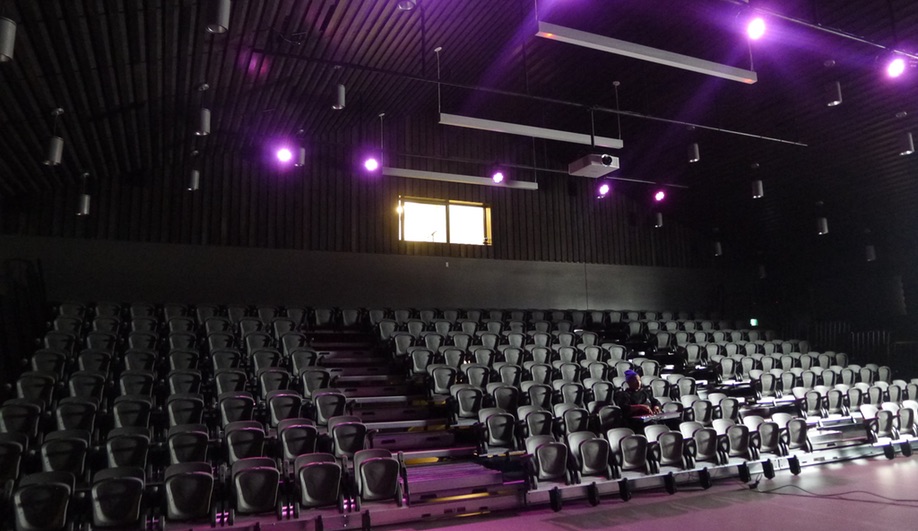 Construction in Nunavik, quite expectedly, provides a number of challenges. Blouin Orzes says that the cost of Arctic construction is triple that of building in cities – the cultural centre had a budget of $3.5 million – and the building season here is short. Material shipments from Montreal took roughly a month to land in Kuujjuaraapik, with ships circling Newfoundland before entering Hudson Bay. 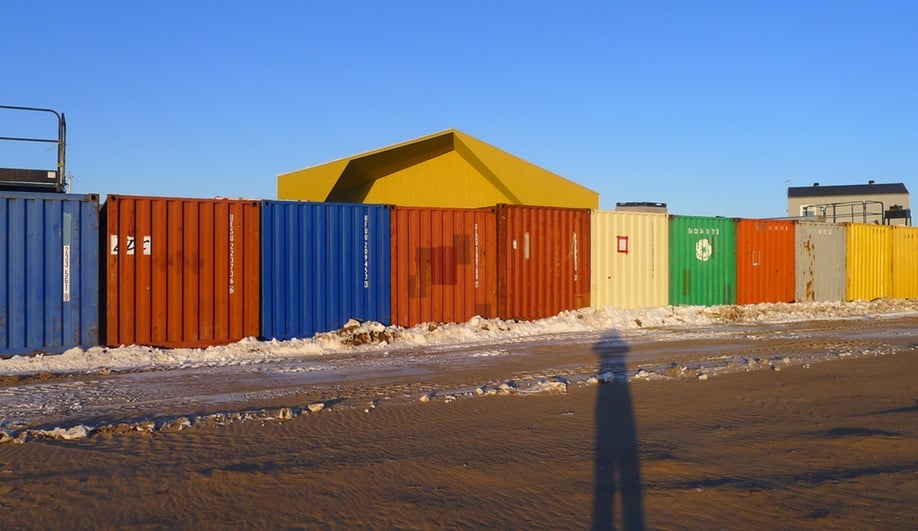 Still, the firm has developed plenty of expertise in Nunavik. It has been constructing buildings in the region for 18 years, and has developed a number of building principles – which include approaches to prefabricated timber – that apply strictly to northern climates. “Constraints associated with climatic conditions, remoteness and the cultural values of the local clientele have all contributed to the development of a specific expertise and project approach,” says the firm. 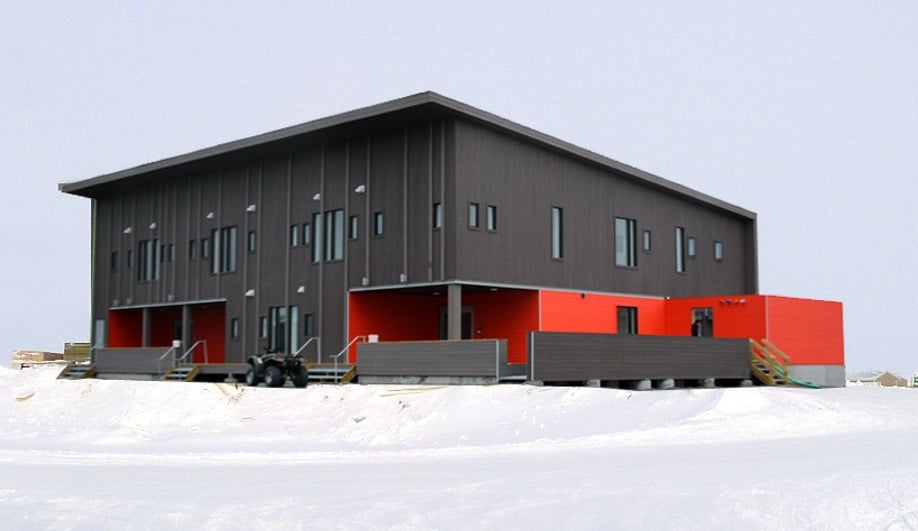 Indeed, Blouin Orzes has a fascinating and ruggedly beautiful northern portfolio, which spans residential, commercial and institutional buildings. The firm has developed a series of prefab co-op hotels, which house between eight and 16 rooms, in Salliut, Umiujaq, Akulivik and Ivujivik. It is currently constructing a bold wildlife research centre at Pond Inlet, designed to be a hybrid research facility and residential studio. In Puvirnituq, it designed an 800-square-metre supportive housing building, providing independent living spaces for those with mental illnesses (above).

Its work in Nunavik led to the firm’s next project – designing Churchill, Manitoba’s Polar Bears International House, a climate change research / educational facility that landed $1 million in funding from Canada Goose earlier this year. The insight the firm has gathered over the last two decades, it says, could be critical for future Arctic developments.

“Thanks to [our] commitment and sustained presence in Nunavik, [we have] acquired an intimate knowledge of the land, its people, their needs and their values,” the firm says. 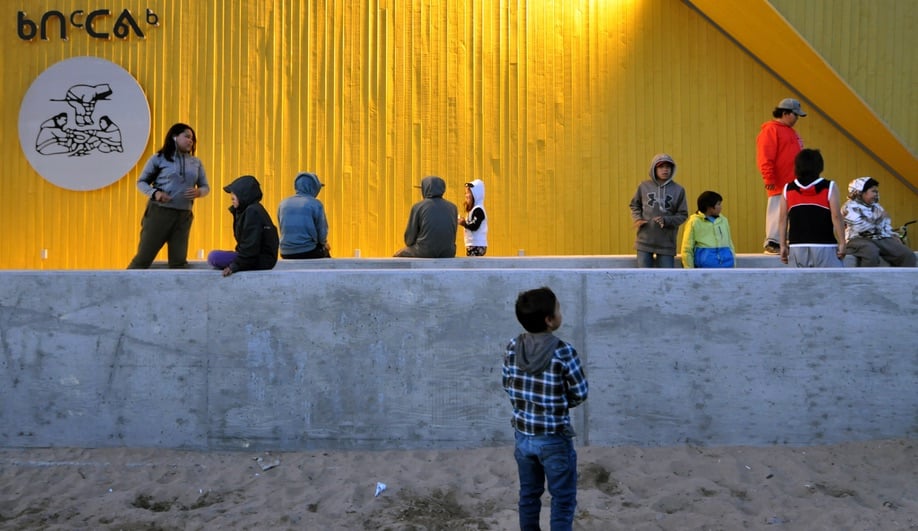