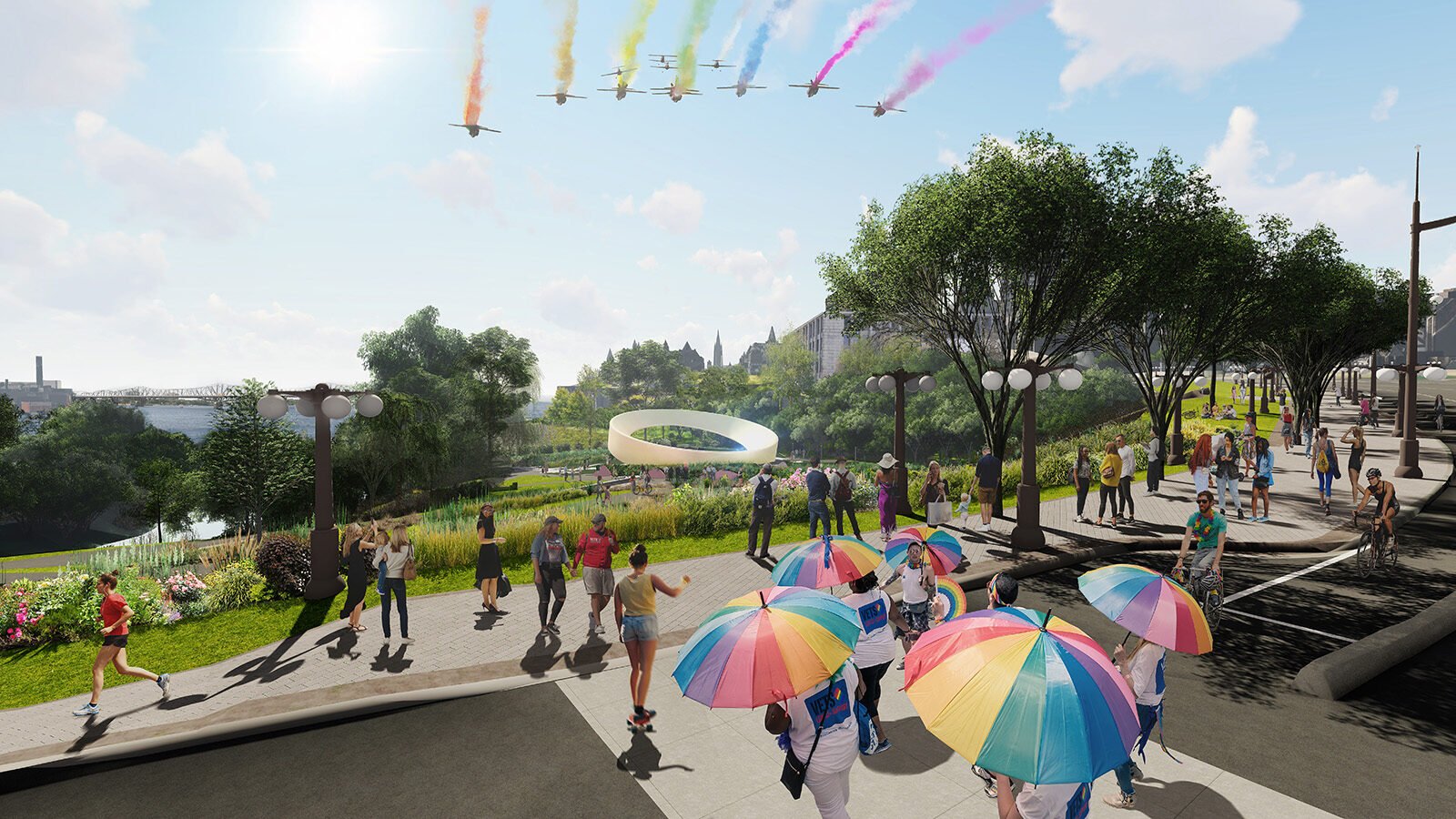 Public input is sought on design proposals for a monument commemorating the LGBTQ+ purge in Canada — and the community’s ongoing resilience.

Though it isn’t inscribed in our history books, Canada has a long history of state-sanctioned homophobia. A federal program that would eventually come to be known as the “Purge” is among the most blatant examples: Between the 1950s and mid-1990s, LGBTQ2+ members of the Canadian Armed Forces, the RCMP and the federal public service were systematically discriminated against, harassed and even fired from their positions due to their sexual orientations.

As part of the settlement for a class-action lawsuit launched against the federal government in 2016 — a portion of which was earmarked for “reconciliation and memorialization measures” — a new monument dedicated to Canada’s LGBTQ2+ population will be erected in Ottawa. The LGBTQ2+ National Monument will be financed through funds that would have been paid to victims of the Purge who passed away before they could receive a share of the settlement.

Part of an ongoing partnership between the federal government and the LGBT Purge Fund, which aims to memorialize the LGBTQ2+ public servants who lost their jobs and livelihoods in those years, the Monument — slated for a downtown site with sweeping views of the Parliament buildings — is intended as a public landmark as well as an educational tool to remind the public of Canada’s fraught history.

Following a 2020 call for design proposals, five shortlisted concepts were recently selected out of a group of 30 submissions from across Canada and around the world. The National Capital Commission is now seeking input from the public to help choose the winning project: the survey is open to all and will close on November 28. The final call will be made by a jury of architects and experts in early 2022 — with completion of the Monument slated for 2025.

Below, we take a closer look at the five designs — which Michelle Douglas, executive director of the LGBT Purge Fund, calls “evocative works that tell the story of discrimination against LGBTQ2+ communities in Canada.” 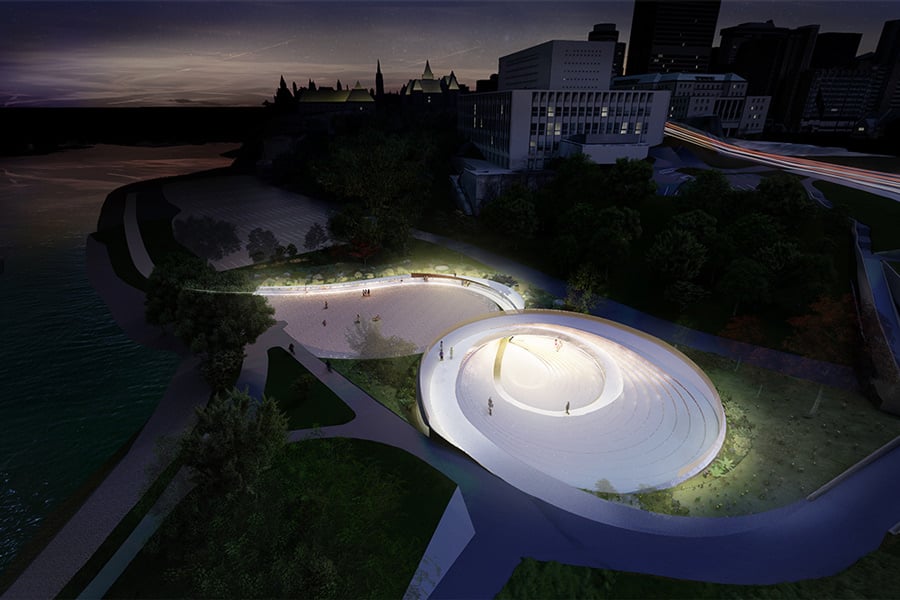 Conceived by MASS Design Group and artist Stephen Andrews, the Glass Bowl proposal embodies a portal or place of transition — meant to symbolize the coming out process. 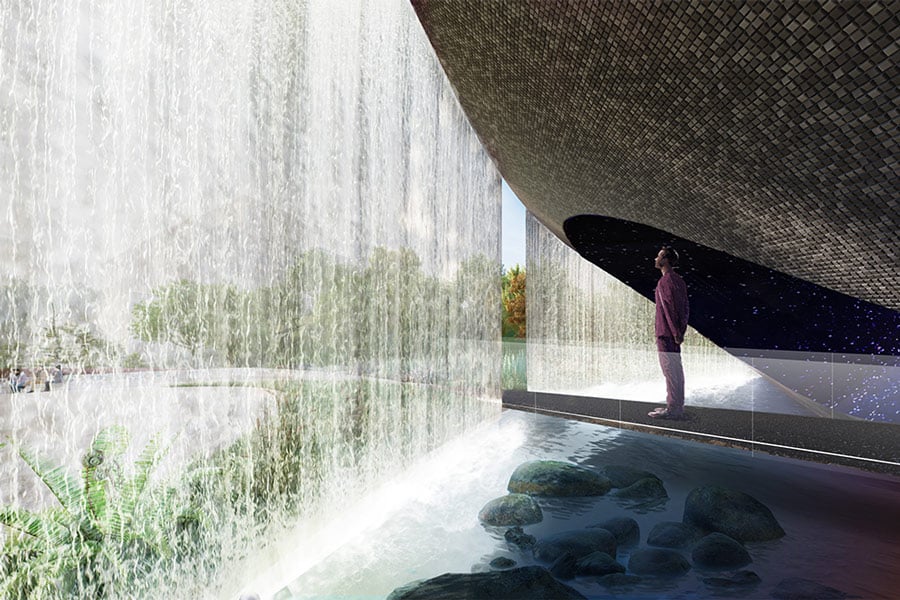 A sunken garden features the names of Purge victims inscribed in glass, and a curtain of water provides a reflective, memorial element, while a circular graded ramp serves as a stage and gathering space for celebration. The Bowl’s design also introduces an interactive element: visitors will be invited to add a piece of mosaic tile to the edge, building “a collective identity, piece by piece.” 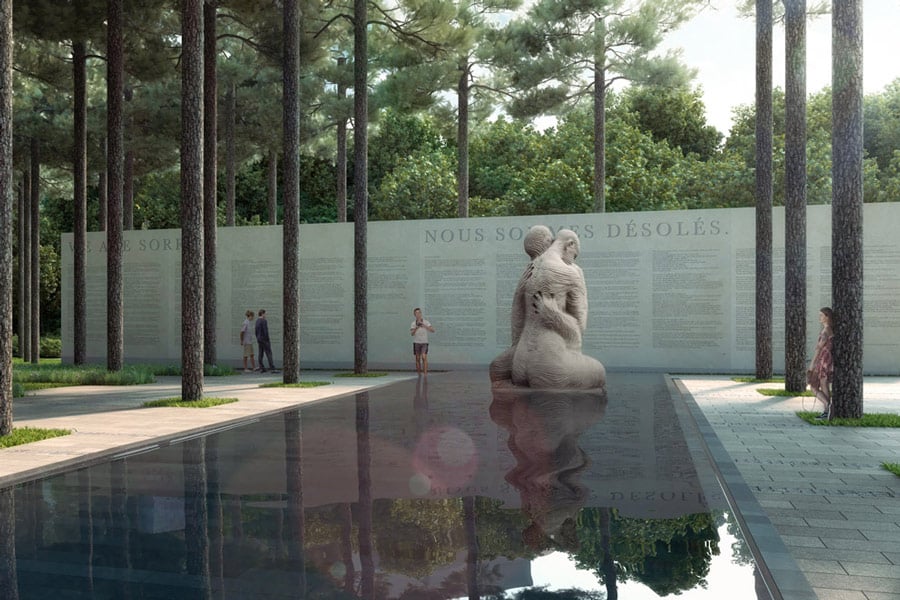 OnCommon Ground’s concept for the monument takes the form of a monolithic concrete fortification, dubbed “the authority wall.” Through a small opening, visitors can access what’s described as a space of “relief.” Beyond the portal, the federal government’s 2016 apology to Purge survivors is inscribed on a porcelain facade, and a sculpture — fittingly called Love is Love — takes pride of place in the middle of a healing garden. 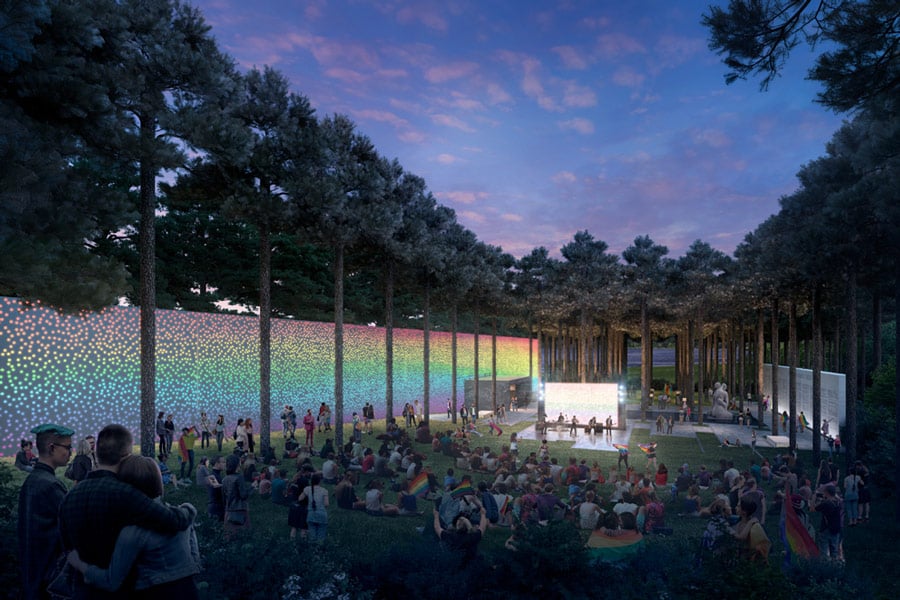 Designed by Ottawa’s bbb architects and PWP Landscape Architects in collaboration with WSP Engineering and visual artists Nadia Myre, Udo Schliemann and Robert Lepage — as well as LGBT Purge survivors Nicole Crevier and Trudi Fontaine of WSP —  the space is, according to the creators, “meant to be felt, not observed.” 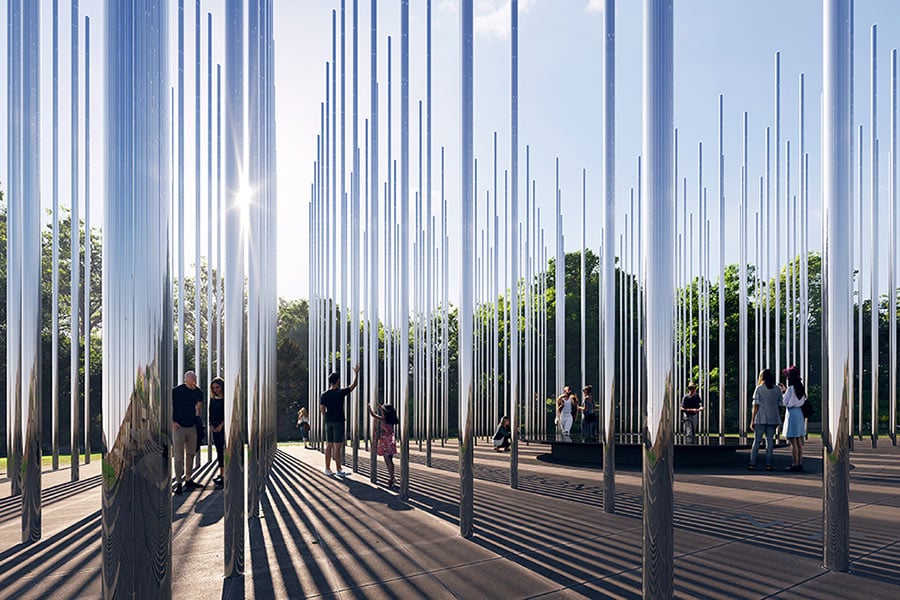 The Bapiiwin (an Ojibwe term for survival, overcoming) resembles a field of flagpoles stripped from their flags. A field of hundreds of stainless-steel poles offer an almost infinite number of pedestrian pathways through the site, leading to a central clearing anchored by a low, heated table — an invitation for dialogue in accordance with Indigenous principles. 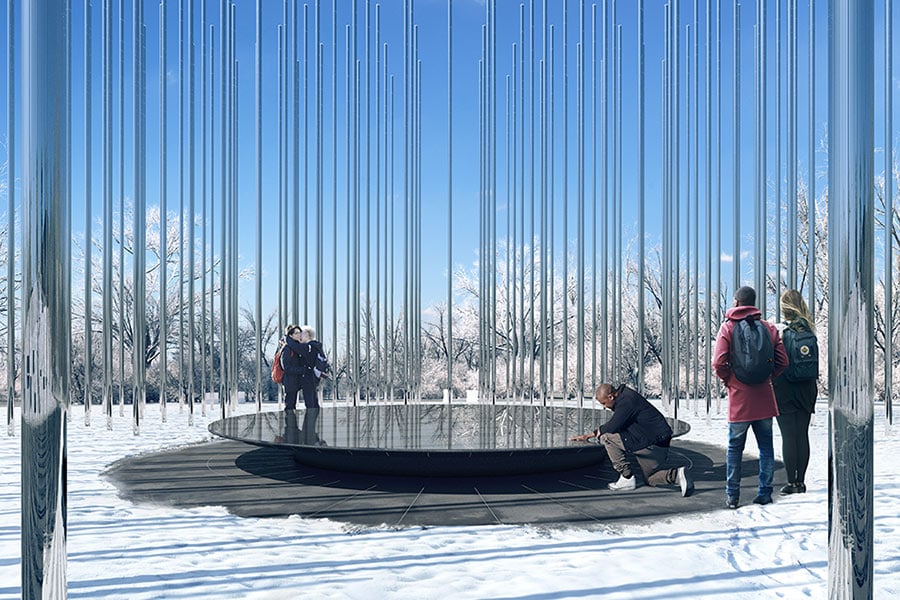 Led by SOM in collaboration with artists Rebecca Belmore and Noam Gonick, as well as historian Lyle Dick and audio consultant Iraklis Lampropoulos, the proposal features a sound installation of words and sentences obtained from Canada’s notorious “Fruit Machine” tests — a pseudo-scientific process meant to detect a person’s sexual orientation through the movement of their pupils. As visitors approach, the unsettling soundscape emanates from a grid of speakers below the ground. 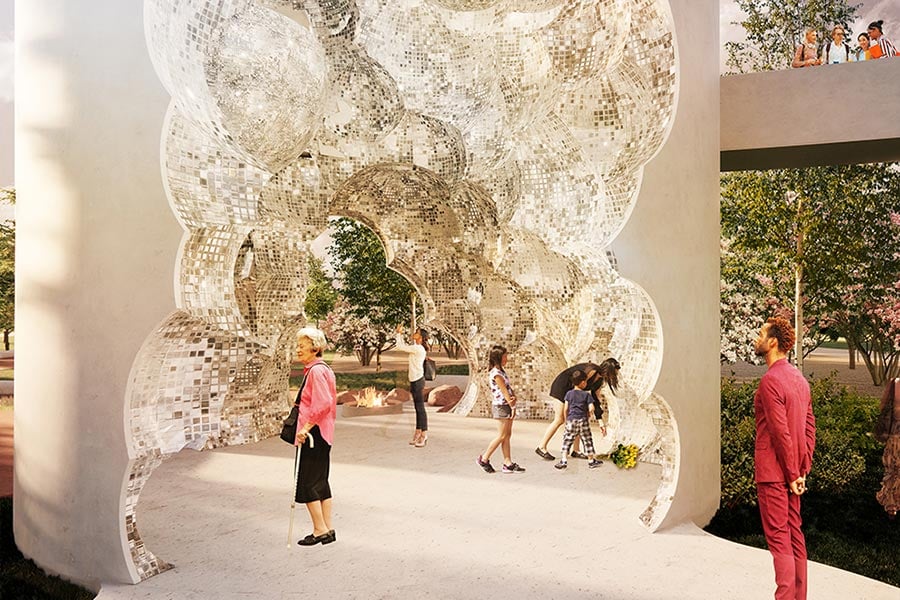 A space for “expressions of grief, healing, and celebration,” the Thunderhead can be approached through two paths — one tracing the history of LGBTQ2+ Canadians, and one ringed with stones hand-picked by Two-Spirit Elders. 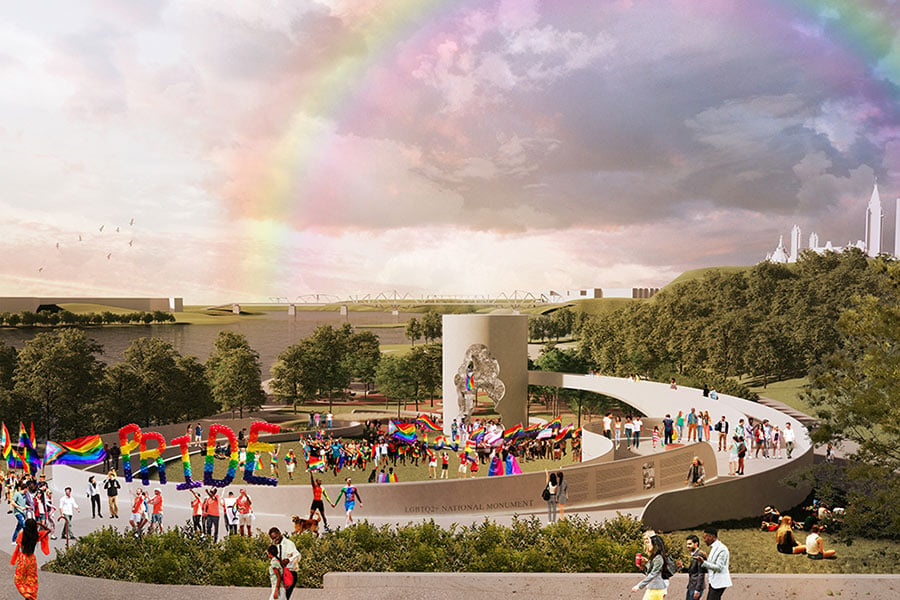 Designed by Public City Architecture, with visual artists Shawna Dempsey and Lorri Millan and Indigenous advisor Albert McLeod, the Monument takes the shape of a large column with an opening carved in the shape of clouds — its interior core is covered in mirrored tiles resembling a disco ball. From the monument’s base, a stage for protests and performances extends into an orchard and healing garden. 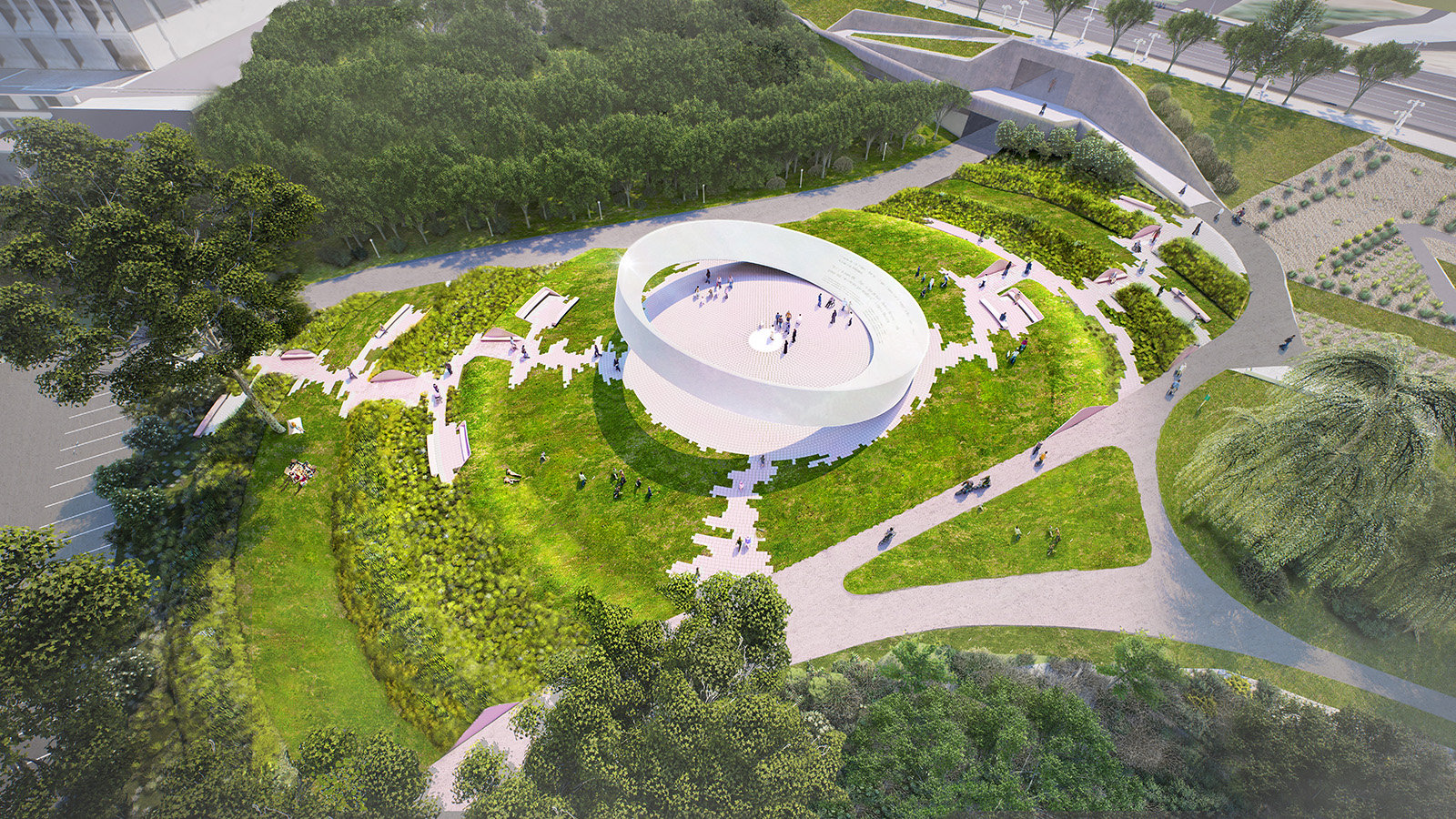 A collaboration between MVRDV, Two Row Architect and Fathom Studio, The Lens acts as a pearlescent contrast to the imposing Parliament buildings in the distance. Dispersed interpretive installations inspired by the Anishinaabe Seven Grandparents teachings tell stories of resilience and share insight into the community’s past. The hollowed-out circle would be a show-stopping landmark — with a light program exuding an otherworldly atmosphere in the evenings. 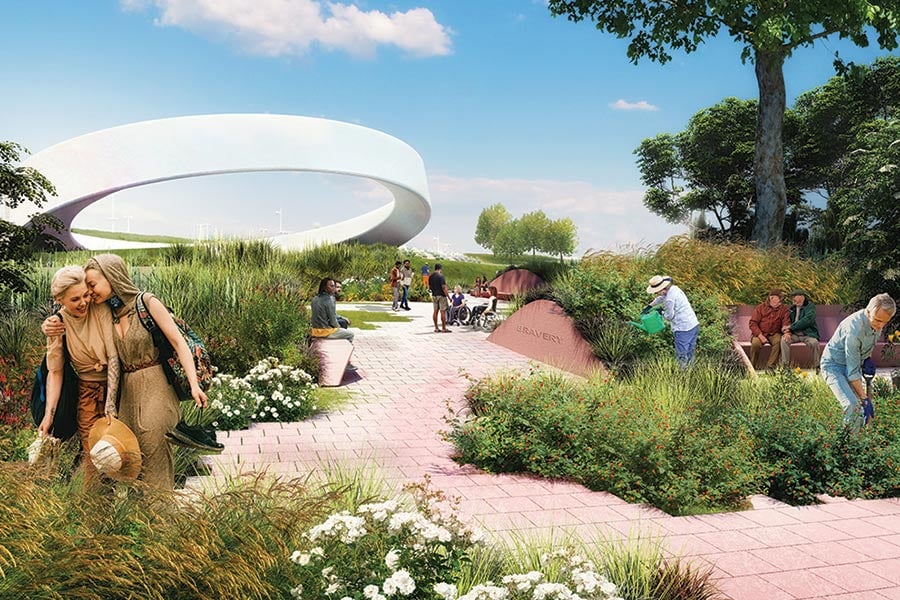 Public input is sought on design proposals for a monument commemorating the LGBTQ+ purge in Canada — and the community’s ongoing resilience.