Philippe Malouin Keeps Breaking the Mould
The Canadian-born London designer is making a name for himself by exploring the strange and unusual, from sugar-based plates to chainmail rugs. 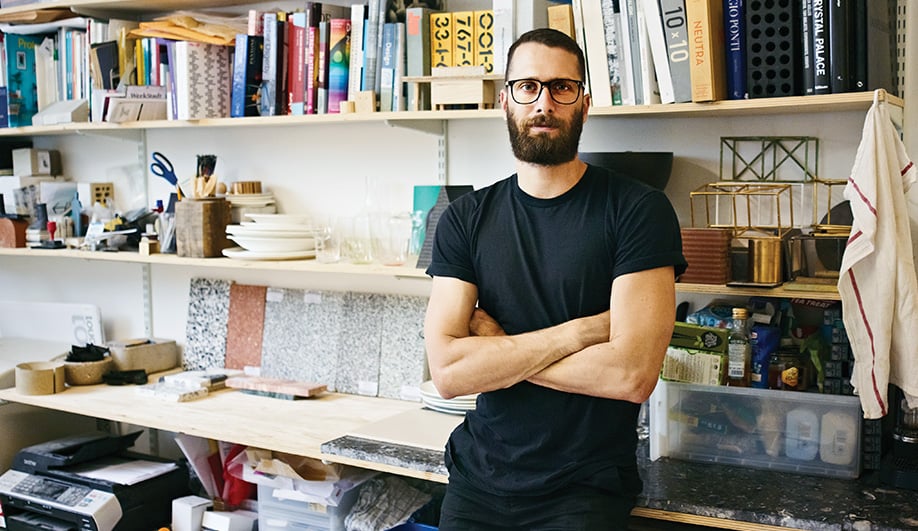 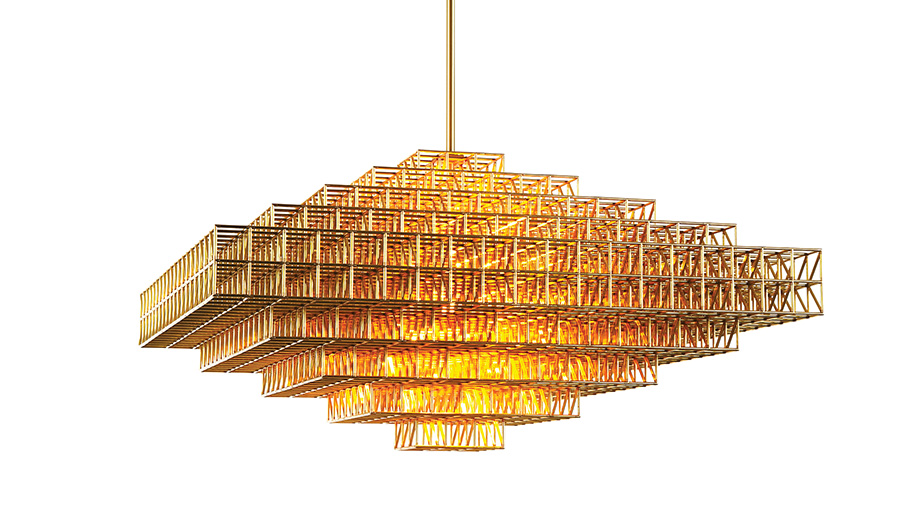 Philippe Malouin has the hands of a carpenter, large and rough around the edges. His workspace in an East London warehouse – not far from a Burberry outlet and a Pringle of Scotland shop, and next to one of the city’s ubiquitous housing estates – is more gritty workshop than slick studio: lumber is stacked in the corner (he’s building crates to ship a product to Italy), and ceramic moulds and assorted materials shambolically line the walls. In one corner sits a large band saw, along with disc sanders and other tools accumulated over years of investigating new materials and manufacturing methods. His design partner, Eva Feldkamp, is leaning over a large worktable, not far from the Montreal-born designer’s favourite tool: the mitre saw. 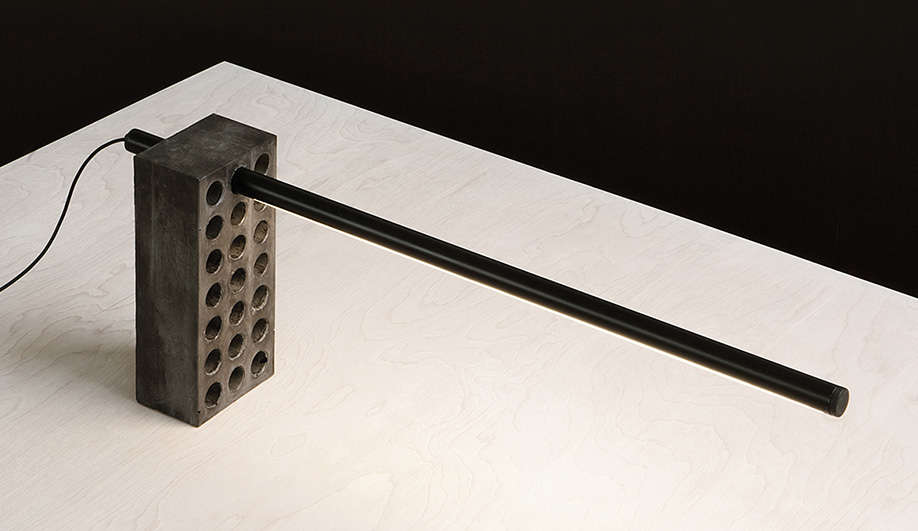 Dressed head to toe in his standard uniform of black, he sports a groomed lumberjack beard, perhaps a nod to his Canadian roots; he apologizes for the mess and pushes through a heavy plastic curtain to the office side of the studio. A metal panel from his Gridlock series sits on his desk; overhead hangs a Popsicle-stick model of Loop, an undulating sculpture made from recycled shipping pallets and recently installed at Bloomberg’s head office in London.

“Lots of things here came from trying stuff out,” he says, looking around. He obsesses over material, often with no idea whether the result will be a sofa, a stool or a bookend – or anything at all. “We do many things you are not meant to do, like using metal polishing techniques on plastic. Mixing up materials and techniques is a good way to experiment,” he says. 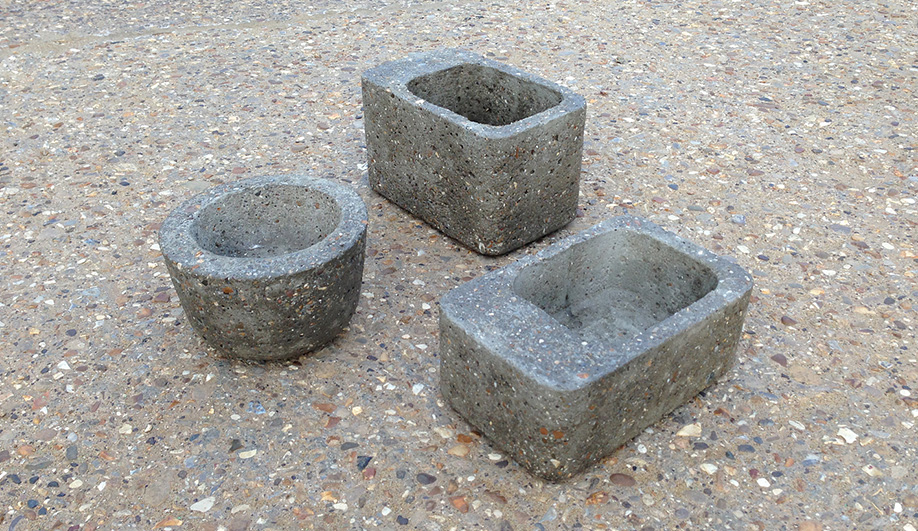 He describes this approach as research, sometimes spending months finding the perfect way to, say, make chain mail by hand (as for his Yachiyo rug); or to connect tiny metal components, as with his latest work to reach stores, a hefty hanging light from the Gridlock series, part of a lighting collection for Roll & Hill. Its geometric squares refract light, giving it the glittering aspect of crystal but with a brutalist edge. “For the connectors, it took two years to get the design perfect. Then we had to find someone who could cast them properly within 0.2-millimetres’ precision.” (They went with a saxophone manufacturer.) 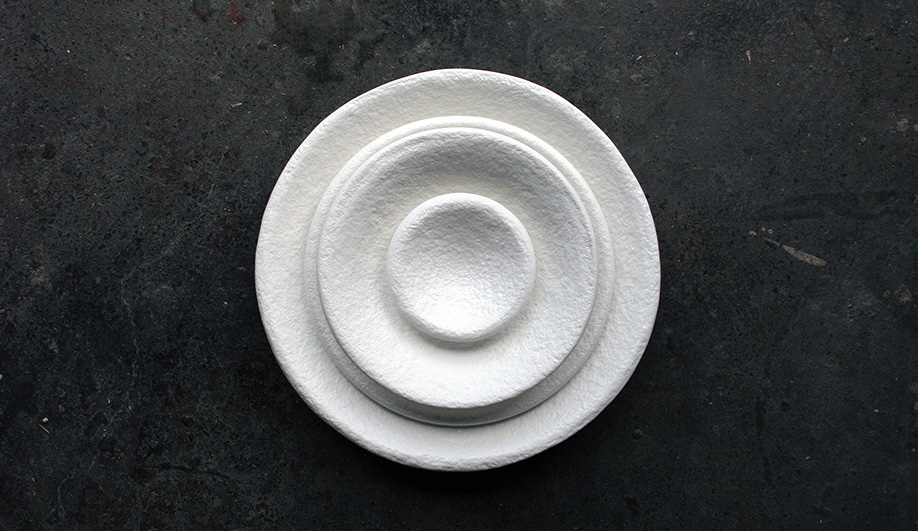 To produce the Dunes dishware for 1882 Ltd., Malouin first built a 3‑D printer to make moulds out of sugar mounds.

Malouin’s work with the Brooklyn, New York, company is one of several recent partnerships that will see the one-time Tom Dixon designer’s diverse (and sometimes counterintuitive) creations go into production. He has received commissions from Swarovski, Finnish furniture company Artek and London’s Established & Sons. At the International Contemporary Furniture Fair in New York this past May, Umbra Shift launched Hanger Chair, a foldable plywood seat with a nifty clothes hanger-shaped hook, which Malouin created in 2008 as a student at Design Academy Eindhoven in the Netherlands.

And you can hardly swing a samples bag at the annual London Design Festival without hitting something with his thumbprint on it. Jason Miller, creative director at Roll & Hill, says Malouin has a strong focus on materials and tackles design as an artist would. “This sets him apart from other designers whose approach is similar but ends up being too conceptual to function.” 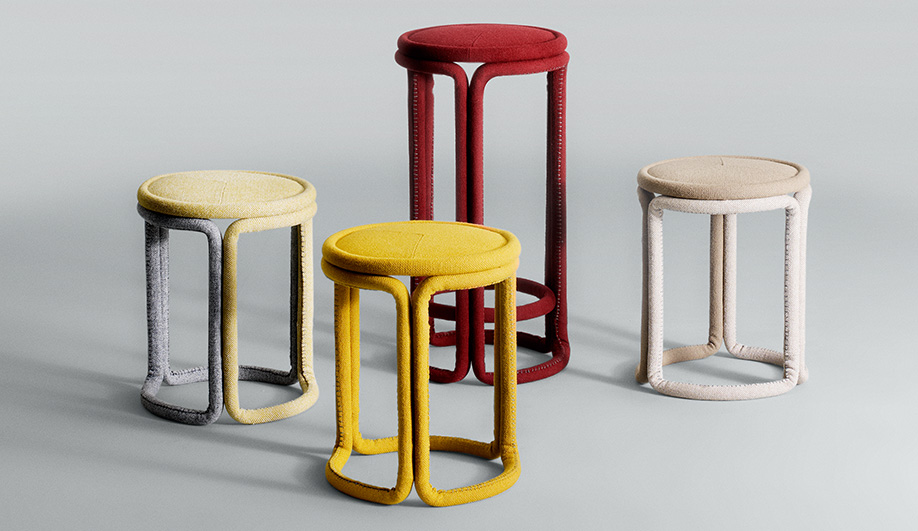 Reinforced with resin, Kvadrat fabric is used as the structural material for the Hardie Stool.

Perhaps it’s no surprise that Malouin takes a craftsman’s approach: he grew up making slingshots and skateboard ramps in his dad’s workshop. Later he studied industrial design at the Université de Montréal, won a bursary to go to Paris’s French national school for advanced studies in design, and finally landed in Eindhoven. At his graduate show, Tom Dixon offered him a part-time job in London. He arrived with a few pieces of luggage, and moved into a four-square-metre flat with a raised ceiling that he converted to a sleeping loft. Plastic and wood shavings were scattered around the downstairs living area turned studio. “I started hiring interns,” he says, “and they’d walk in while I was asleep.” Eventually, freelance work took up much of his space and time, so he left Tom Dixon to focus on his own pursuits. 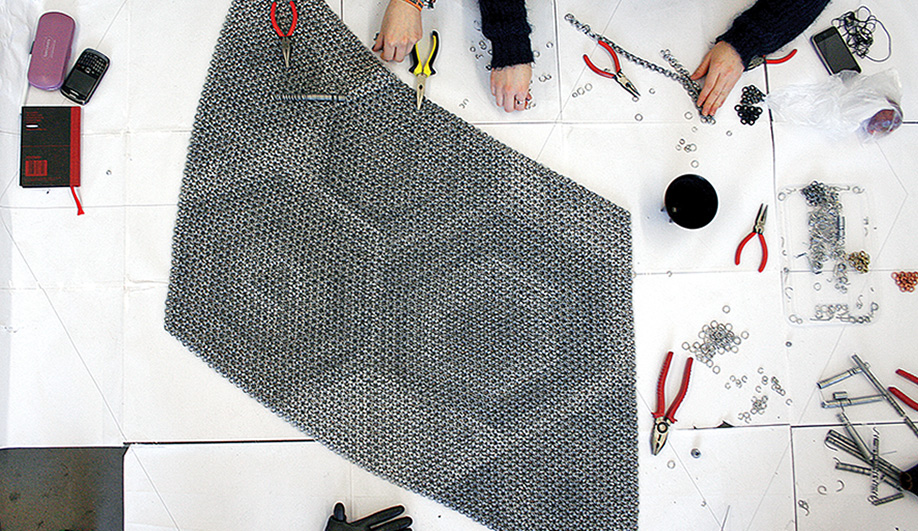 In 2011, Malouin and his design partner, Eva Feldkamp, hand-wove galvanized steel rings into a metal rug, designed for Yachiyo of Japan.

Some of his greatest successes have come from having free reign. In 2012, textile design company Kvadrat asked him to create an object for Milan design week. He and Feldkamp only knew that they wanted to use a stiff fabric. “But how do you make fabric stiff?” he asks. “We tried laminating it, but that was too flat. Then we put resin on it, rolled it and vacuum-bagged it.” By morning, the material was hard, but it lacked the tautness required for furniture. “So we put a loop on an upside-down bucket and rolled it down like you would with your socks. The shape just happened.” That shape became Hardie Stool, made of nothing but fabric and glue, with stiff fabric legs. “It was all about ‘Okay, we have this problem. How do we solve it?’” he says. 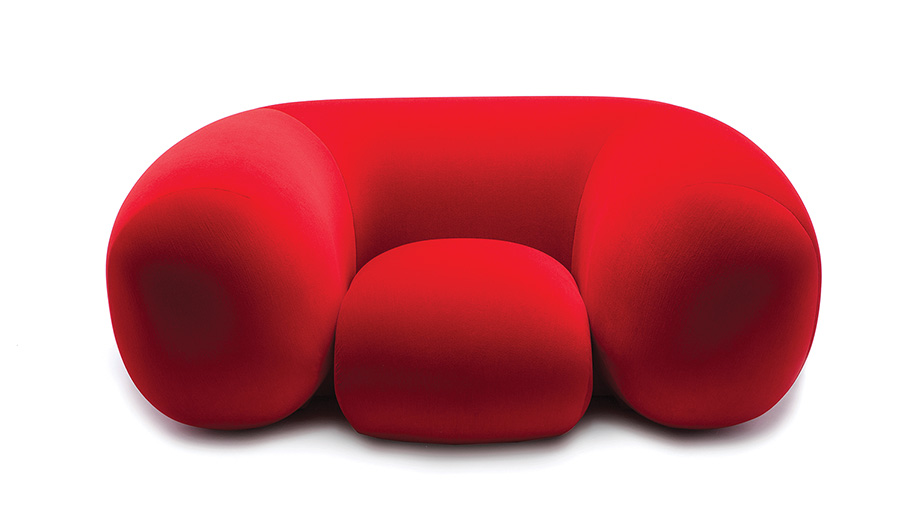 This spring, the studio presented Mollo, manufactured by Established & Sons. The seat is made of nothing but velvet-upholstered polystyrene foam.

These stories – of conjuring a stool from fabric, or a couch from a chunk of foam (Established & Sons is rolling out the chubby Mollo armchair, which has no internal support), or slip-cast ceramics inspired by sand piles (for the five-generations-old North Staffordshire pottery company 1882 Ltd.) – are of design as exploration rather than expectation. It usually starts not with an idea but with playing around, just like he did in his dad’s workshop. 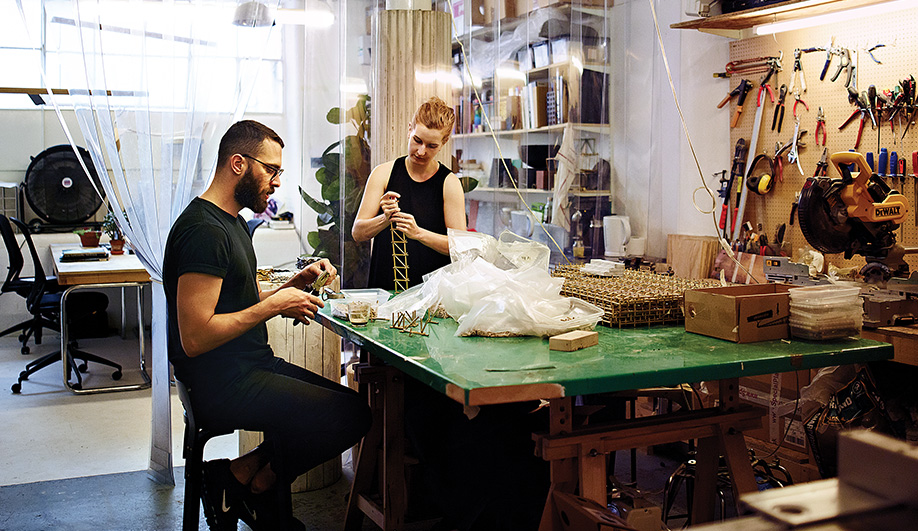 The studio is dominated by work benches and array of tools. Says Malouin about his process: “Mixing up materials is a good way to experiment.”

For his next project, Malouin is visiting a stone manufacturer in Tel Aviv. “They want us to take a look at their slabs, then try some stuff,” he says. As always, he doesn’t know yet what will come of it.