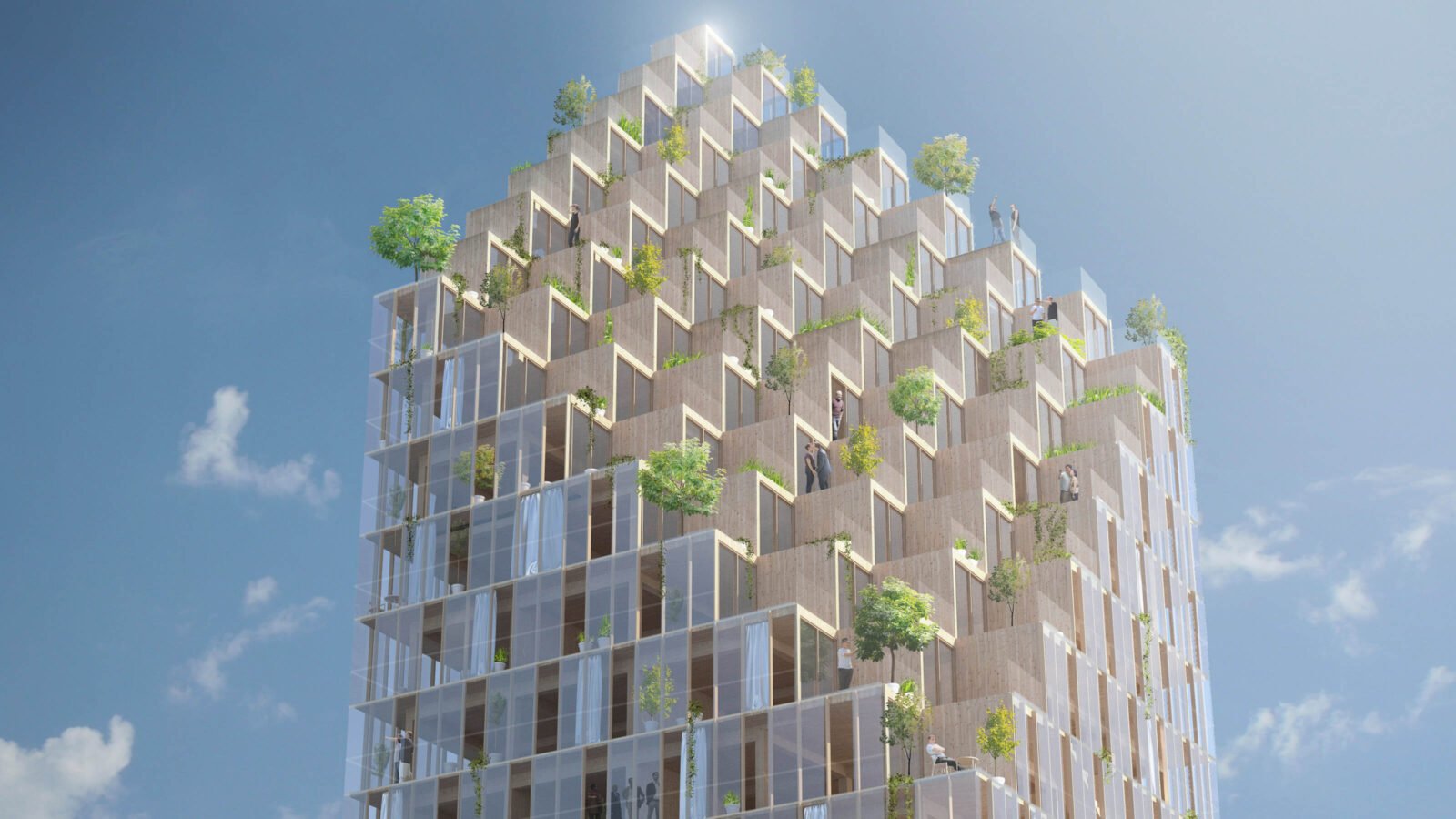 The Rise of Timber Towers

A decade ago, photovoltaics and geothermal were all the rage. Now, mass timber has usurped the race for environmentally friendly construction. Here are six towers under development, all of them pioneers of the plyscraper craze.

One of the biggest proponents of mass timber building is Vancouver architect Michael Green, who has been a longtime advocate of its virtues. For years, Green has delivered impassioned lectures and become a wildly popular TEDTalk speaker, spelling out the many eco-friendly benefits of building towers – if not entire cities – out of wood. Timber construction isn’t a novelty he says; it’s a necessity, if we are serious about reducing carbon emissions.

He has also helped dispel some of the myths. Wood buildings, for instance, are not the fire hazard many assume they are. The cross-laminated timber (CLT) panels used to build them are made by gluing together layers of softwood that run perpendicular to each other. It’s a method that makes the panels stronger than concrete as well as fire resistant. If the material catches fire, it just chars.

Green’s latest project is a yet-to-be-named 11-storey office building in New Jersey, spearheaded by real estate developers Lotus Equity Group as part of a larger development called Riverfront Square. The mid-rise building will anchor the masterplan, which includes other buildings designed by the likes of TEN Arquitectos of Mexico, and New Jersey’s own Minno & Wasko Architects and Planners. 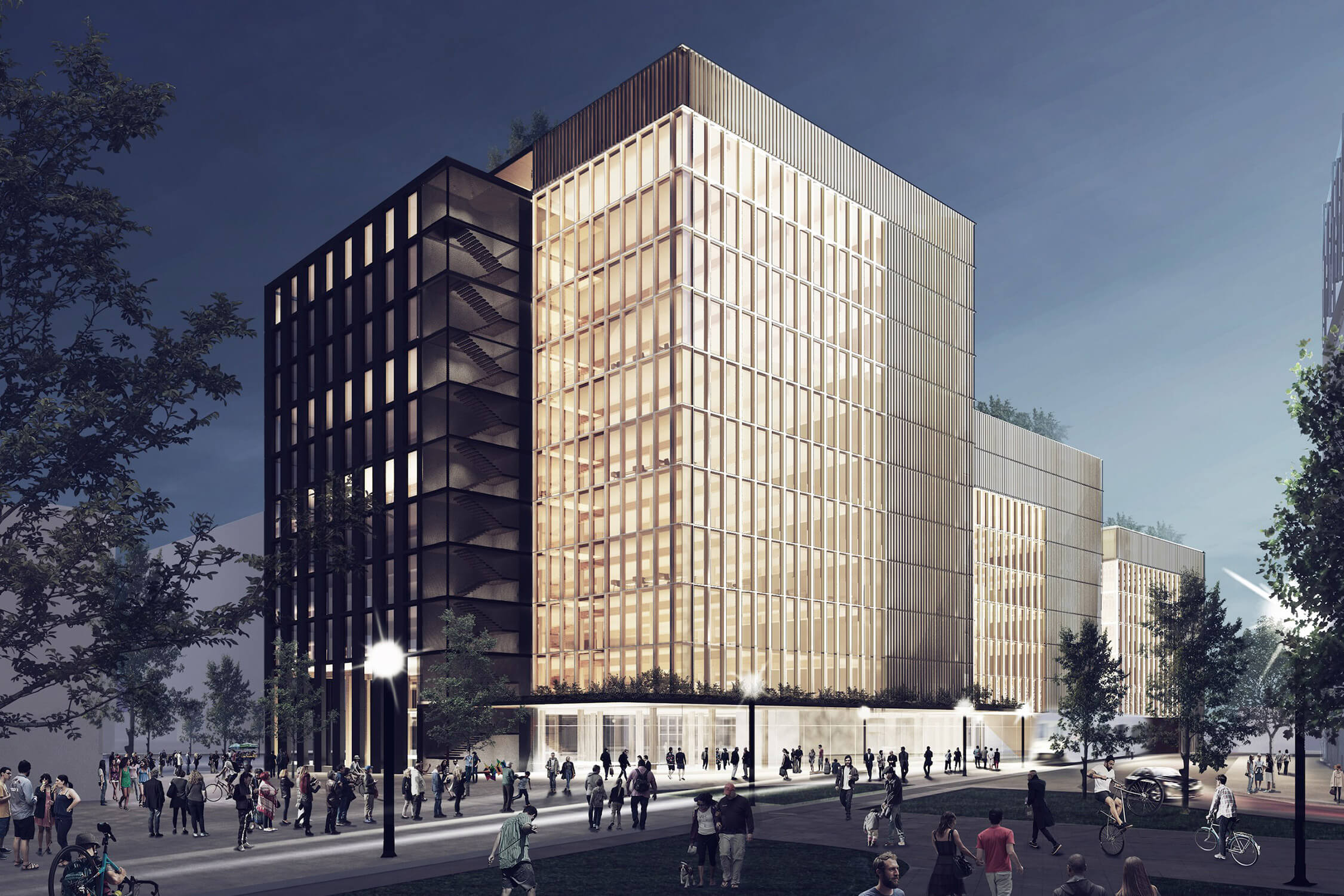 Green’s building will use CLT beams and panels that rise from a concrete foundation and its facade will be clad in brick, metal panelling, and more wood. In renderings, the interiors show off the construction method in its fullest, with walls, floors and stairs left in a gloriously raw state.

Its projected 11 storeys will make this the highest office building in the U.S. While that doesn’t sound all that tall, that has more to do with building restrictions than the limitations of wood. In other parts of the world, timber towers are being sketched out and rendered in heights that are at least twice that, and some even more.

“It’s definitely wood’s moment,” Green said recently about the rise of plyscrapers. We have to agree. Here are some recent proposals that are making news and pushing for what might come to define the future of cities: lumber skylines.

The tallest scheme comes from Sumitomo Forestry of Japan, a wood product company that plans to build 70 storeys up – that’s almost four times the height of the current “world’s tallest”: the University of British Columbia’s Brock Commons student residence in Vancouver, by Acton Ostry Architects.

At a projected cost of US$4.5billion, W350 will be 90 per cent wood, harvested from Japan’s large supply of cedar and cypress. Its internal framework of columns and beams will use braces set at angles, to help prevent the deformation of the tower. The diagonals will also ensure it can withstand Japan’s high rate of seismic activity. Nikken Sekkei, a Tokyo-based design company and leader in earthquake-proof building, has contributed to the design. 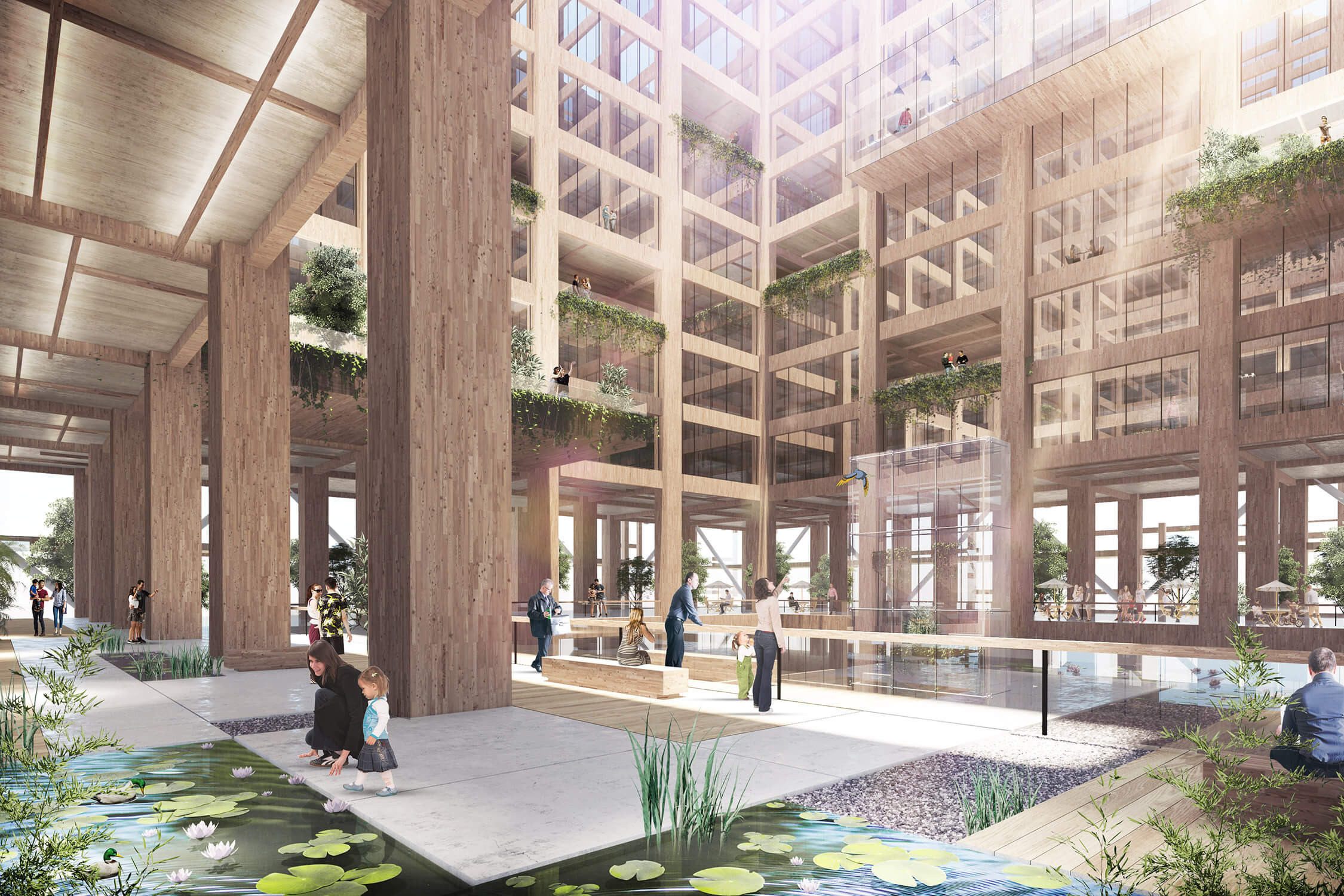 The interior will be a pure wooden structure with balconies on all sides to facilitate the spread of greenery from the ground to the top floors, and to contribute to the project’s slogan: “changing towns into forests.”

An estimated 185,000 cubic metres of wood will be needed to complete the entire structure, which isn’t going be built any time soon – Sumitomo Foresty predicts the complete date will be 2041. 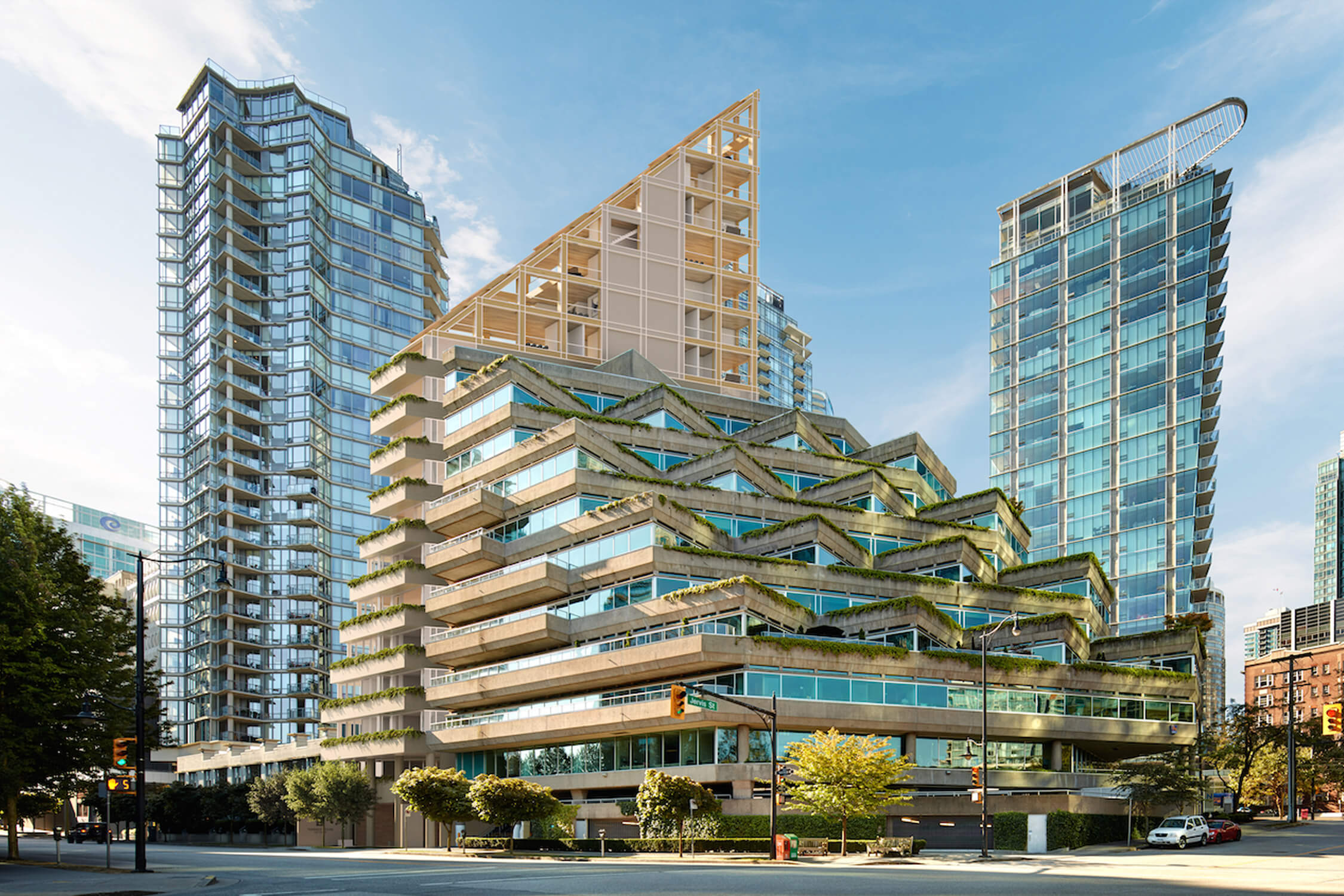 Poised for construction in Vancouver is Terrace House, a 19-storey residence designed by Pritzker Prize winner Shigeru Ban. It reaches just over 70 metres at its highest point, and is defined at street level by rows of generously sized terraces that zigzag along its facade.

Like Green’s New Jersey project, Terrace House is a hybrid timber structure, which means it uses steel and concrete, but in much smaller quantities. The foundations for instance, are poured concrete. There are multiple benefits of combining materials, but one of the main advantages is a much lighter building. Out of any other building material, wood provides the most strength for its weight.

As of June 2017, the building had secured development approval.

In London, PLP Architects has embraced mass timber building with gusto. While many of the firm’s designs are still in the research and development stage, the schemes they have come up with are inspiring and ambitious. The Oakwood Timber Tower (pictured above), for instance, imagines a spire rising 80 storeys and containing some 1,000 residential units.

The proposal is located in central London and, if built, it would be integrated at its base with another architectural groundbreaker: the Barbican, a brutalist complex originally built in the 1960s. PLP has collaborated on the scheme with researchers from Cambridge University’s Department of Architecture and engineering firm Smith and Wallwork.

Oakwood Timber Tower II in the Netherlands, by PLP Architects

The Oakwood Timber Tower II is another scheme by PLP, who have proposed a wooden skyscraper in the Netherlands defined by an oval footprint of approximately 24 by 48 metres. Its layered facade uses load-bearing wooden columns that provide the structure’s main stability.

The columns are spaced out at 3.6 metres and rise up to the full height of the tower, twisting as they go to create a diamond-shaped weave. The multi-purpose scheme includes restaurants and cafes at its base, and a SkyBar on its rooftop.

The River Beech Tower in Chicago, by Perkins+Will

Perkins+Will is a leader in sustainable building so it’s not surprising this global firm is positioned to be a major player in the field of wooden superstructures. It recently floated one of the most visually stunning schemes yet, for two adjoined towers to rise in Chicago’s South Loop district.

Working in collaboration with engineering firm Thornton Tormasetti and researchers at the University of Cambridge, Perkins+Will sees River Beech Tower more as a hypothetical experiment at this stage. The proposal is a way to gain a better understanding of what the possibilities (and limitations) are when constructing wooden skyscrapers.

Its form sandwiches a central atrium between two ultra-slim towers encased in glass. These CLT beam-and-panel towers would be structurally supported by the atrium’s glue-laminated timber (GLT) cross braces, which, besides offering an incredibly expressive interior experience, add the necessary support to allow for the entire structure to rise 244 metres.

Current building codes alone prohibit a project like this from happening any time soon. In fact, Chicago doesn’t permit any wood building in its downtown core. Yet, with more developers angling for novelty, and the bragging rights to claim a project as the tallest wooden structure in the world, River Beech Tower and others like it are sure to define one the greatest architectural shifts of the century: the green skyscraper.

A decade ago, photovoltaics and geothermal were all the rage. Now, mass timber has usurped the race for environmentally friendly construction. Here are six towers under development, all of them pioneers of the plyscraper craze.