Q&A: Michael Green
Azure contributing editor Adele Weder spoke to Green at his North Vancouver office about the challenges of building skyscrapers out of timber. 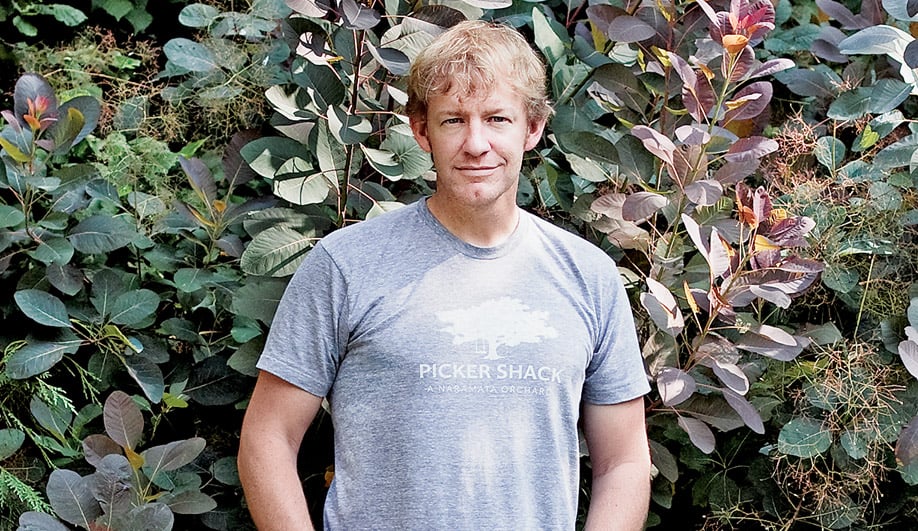 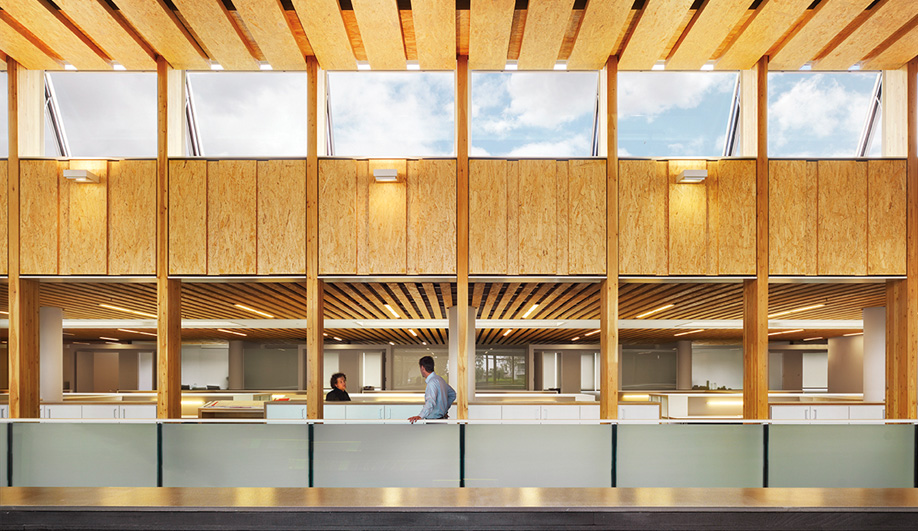 Green was the architect of the North Vancouver City Hall renovation. 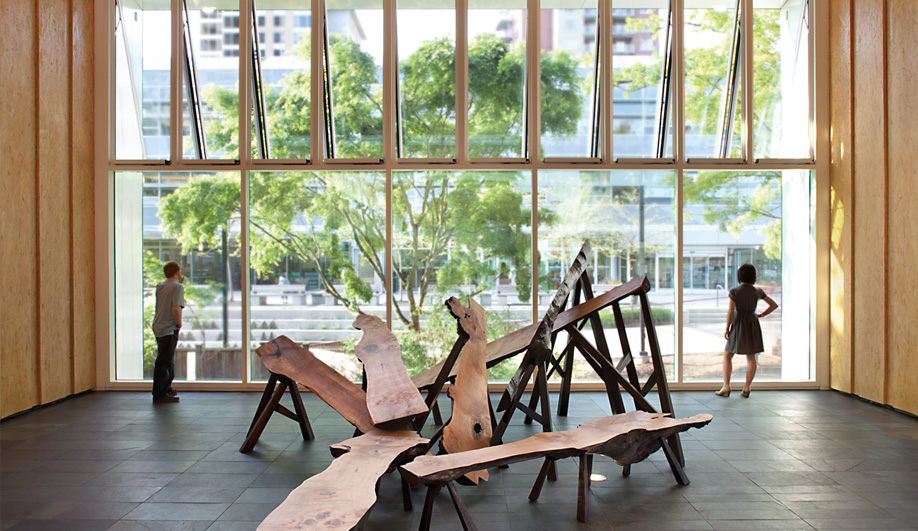 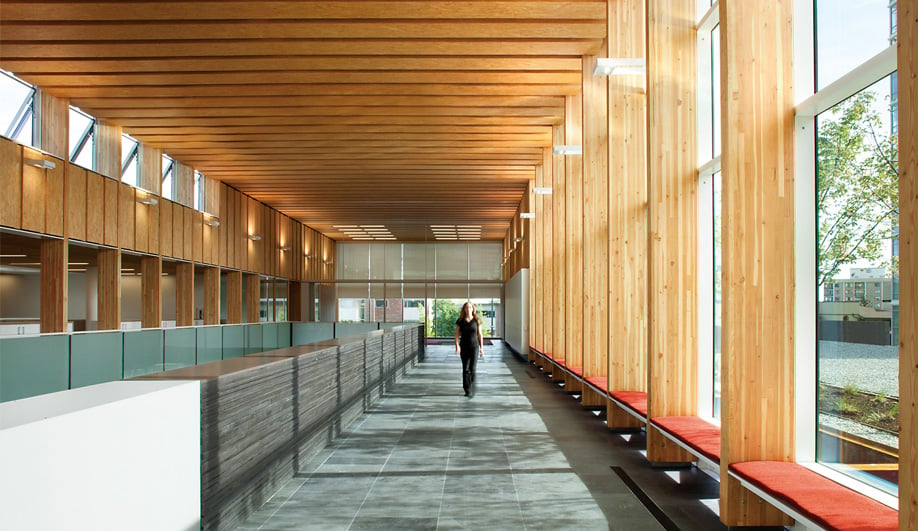 Nine-metre-wide spans of engineered LSL boldly define the ceiling and walls in the main atrium. 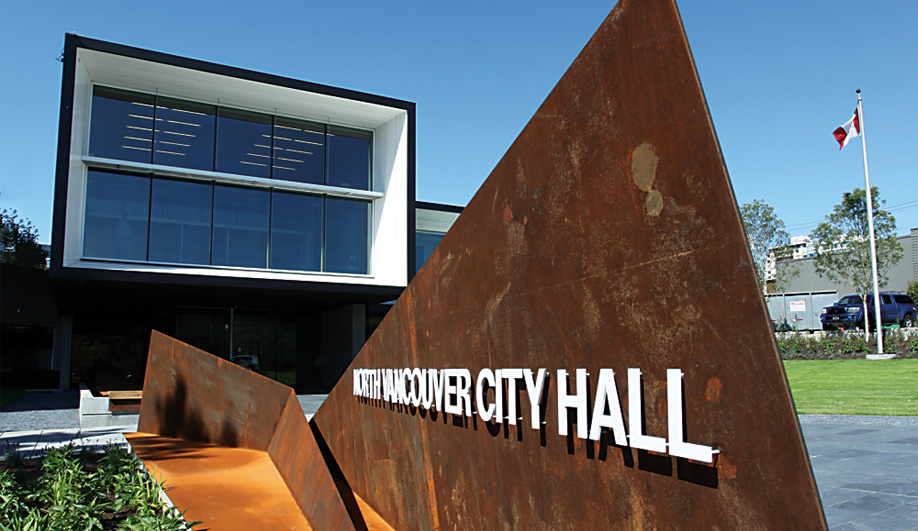 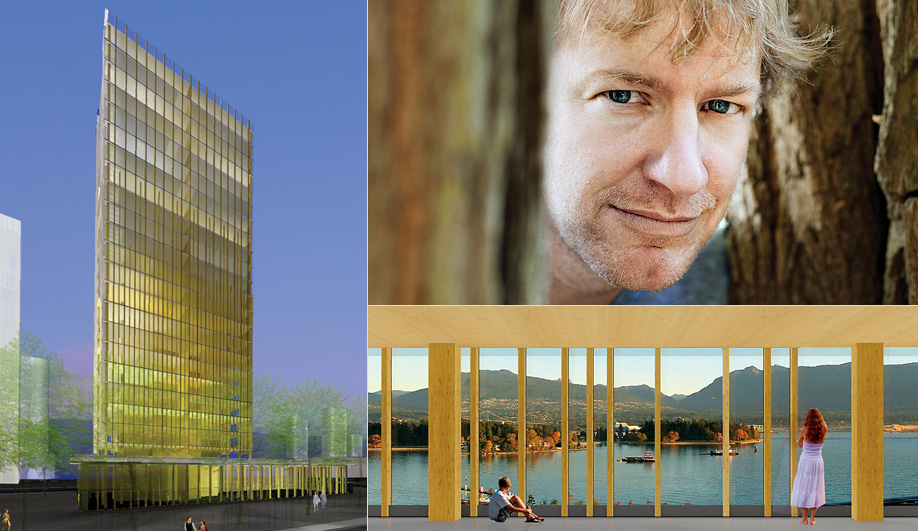 MGA’s renderings for a tower built from timber. While engineering a wooden high-rise is entirely feasible, the project remains at the proposal stage.

From his early work at Cesar Pelli & Associates to the co-founding in 2003 of McFarlane Green Biggar Archi-tecture + Design in North Vancouver, Michael Green has cultivated an illustrious career. Before launching his own office (MGA) earlier this year, he and engineer J. Eric Karsh of Equilibrium Consulting completed a massive report on the feasibility of constructing tall buildings out of wood. Engineered materials such as cross-laminated timber (CLT), laminated-strand lumber (LST) and laminated veneer lumber (LVL) are bonded using a method that replicates the strength and fire resistance of old-growth lumber. The verdict, according to Green: with current technology, we can now safely build wood-framed buildings up to 30 storeys high, replacing the world’s towers of steel with towers of wood and slashing global carbon emissions in the process. The 240-page study, titled “Case for Tall Wood Buildings,” triggered a surge of excited media chatter: breathless blog-gers, design journals and even CNN have reported his findings as a possible game changer. But shifting the modern construction paradigm toward wooden skyscrapers is not as easy as falling off a log. Azure contributing editor Adele Weder spoke to Green at his North Vancouver office about the challenges of building skyscrapers out of timber.

Your report has created quite a buzz within the construction community: you’ve garnered a great deal of support but also a few skeptics. What kind of reaction have you been getting?

The response has been great, really supportive. I’ve been asked to explore the idea with some Vancouver developers, and have discussed and advised on the concept with Westbank developments, and with SOM in Chicago.

Do you confer with firms like Waugh Thistleton Architects – who built the tallest wood building so far, London’s nine-storey Murray Grove building – to share information on logistics?

As it turns out, Andrew Waugh is a good friend, and yes, we do talks together; we share ideas.

What other architects do you expect will design wood frame high-rises in the near future?

I think SOM, Bjarke Ingels, Richard Rogers – these are some of the firms I expect will be looking at it. It will happen. The biggest challenge right now is creating a wide-scale change in perception.

Other than changing attitudes, what practical impediments still lie ahead? Some architects and developers are saying it will be difficult or impossible to detail the high-altitude joinery properly, and that the shrinkage and expansion factors of wood could cause even tall timber to rot.

The joinery and erosion is really not the issue. It’s based on a misunderstanding that the wood will be exposed. But it won’t be; it’s the framework, and there would always be a standard building envelope, as with every framework. Because of the timber’s mass, even in the case of envelope failure it would take an extremely long time for the wood to become structurally unsound. As for concerns about shrinkage and expansion, the way that CLT, LSL and LVL are manufactured, the process transforms and binds the alternating layers so shrinkage is significantly mitigated, as does kiln-drying the wood before lamination.

Ian Gillespie of Westbank told me he’s exploring the possibility of doing a tall ­timber-frame high-rise with you, but he said probably something like 20 storeys is the “sweet spot.”

Yes, I’d agree with that. But even 30 storeys is possible. We’ve done the studies, and it’s as safe as some conventional framework systems, in terms of seismic strength. We should be building for earthquake resistance, and mass timber frame- work has the give and strength to be the perfect structural material in an earthquake zone.

While you were with MGB, you completed a strik­ing two-storey transformation of North Van­couver’s City Hall, using a large quantity of timber. I imagine it would be a bit of a stretch, though, to go from two storeys to 30.

North Van City Hall is only two storeys because that was our mandate and it’s that kind of project; it has nothing much to do with this report. It does have a nine-metre LSL span in the atrium, but mass timber can go much, much higher.

The report seems to be generating a polarizing response: some of the naysayers don’t realize what contemporary engineered wood is capable of; on the other hand, fans seem oblivious to the potential limitations.

What’s galling is that sometimes it’s as though they’re not even reading the report. The engineered wood we’re talking about is nothing like conventional light wood framing. It’s like heavy timber, in that it chars but is fire resistant for hours. But the mass timber would be made from fast-growing, renewable forest rather than old growth that’s irreplaceable.

What is especially interesting is your point that this wholesale change requires, as you say, a massive new global system of sustainably managed forests. Is this realistic, given our collective track record?

That’s a real concern. Forestry management in North America is basically under control, but I expect that in the southern hemisphere, preventing further deforestation will be the number one challenge. What we have to do is create an economic incentive in those regions to maintain the forests. Right now, the economics of wood versus agriculture privileges agriculture, which is why forests are continually being cut down in the developing world.

The other environmental challenge is all the chemicals and adhesives used to transform raw wood into CLT, LVL or LSL.

The glues aren’t perfect, so that’s a valid point. But they are getting better and will continue to. They are less environmentally harmful than the alternative, building with concrete and steel, which are non-renewable and extremely costly in terms of carbon emissions. In Austria, they are currently manufacturing heavy timber with no glues at all, by a system of mechanically inserting dowels into each layer during the laminating process.

No, not really; it’s just a matter of developing the expertise and building the facilities. It doesn’t have to cost significantly more.

When do you think you’ll get to build an actual wood skyscraper?

I wish I knew. I had a project on the table with a developer for a high-rise student residence, but it fell through. Nothing to do with the wood frame construction; the winning proposal just brought more money to the table. But I feel it could happen any day. I’m working on a second report, “Tall Wood Phase II,” with Eric and Equilibrium. And I have plenty of other projects to focus on.

Don’t tell us you’re going to stop saving the world now, in mid-flight, and go back to typical architectural work.

Much of the work I’ve been doing connected to this issue has been unpaid, and we’re also involved in many other cool projects. It doesn’t have to happen today, but it will happen. If you don’t start by saying it’s possible to travel to the moon, then you’ll never get to the moon.