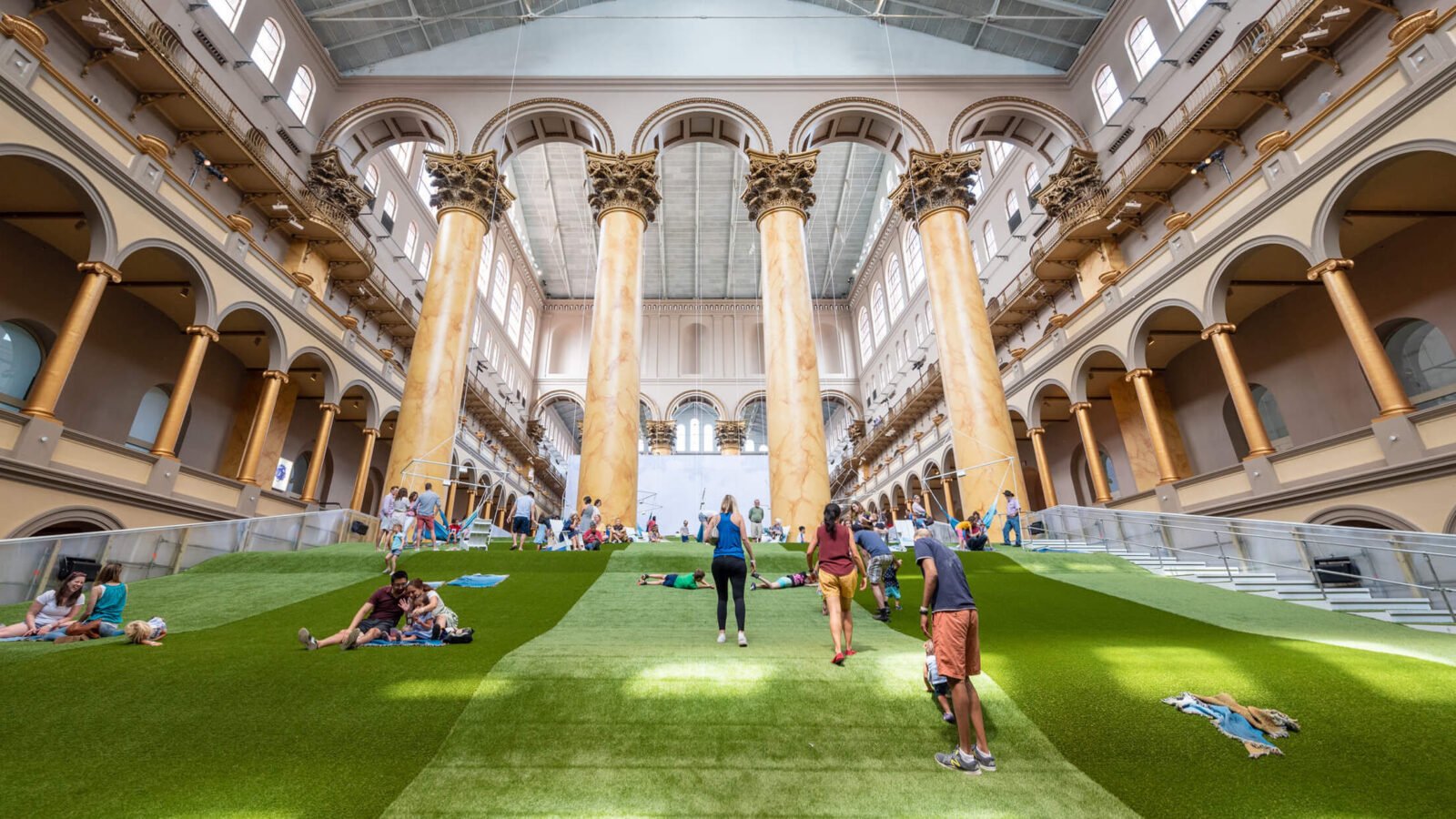 Rockwell Group’s Lawn Explores the Mythos of the American Summer

Few spaces are as deeply embedded into the fabric of American life as the turf lawn. According to NASA observations, lawns account for more surface area than any cultivated crop, covering some 128,000 square kilometres. At the National Building Museum in Washington D.C., the seemingly ubiquitous green surface is the subject of this year’s Summer Block Party installation, which was unveiled to the public on July 4.

Independence Day was a fitting occasion to introduce a quintessentially American installation. Designed by LAB at Rockwell Group, the installation – appropriately titled Lawn – transforms the museum’s great hall into an expansive open space of artificial grass. Suspended from the 100-foot ceiling, hammocks are a quietly dramatic showpiece, while clusters of chairs and picnic blankets round out a casual summertime mood.

Set on a gentle incline, Lawn hints at the ambiance of watching baseball in the park, having a BBQ, or catching a movie under the stars. But the National Building Museum is no backyard or public park. Framed by the museum’s ornate Renaissance Revival interior, Lawn takes on a subtle sense of abstraction. This is not real grass, and it’s not really outdoors. Sounds of bees and crickets come from speakers. Even the fireflies are fake, conjured up for children to catch – by using a custom augmented reality app.

Lawn makes no apologies about what – and where – it is. The immaculate turf and pristine lawn furniture create an almost uncanny feeling, reinforced by the surroundings. At the end of the hall, the “lawn” even gives way to a grid of blue turf, replacing grass with sky in a gesture of dreamy, disembodied romance.

Artifice is on full display, but the mood is not irreverent or smart-assed. There is a genuine sense of fun, leisure and shared experience, supplemented by a summer-long program of events and movie nights. But what does it all mean?

“The lawn is a fascinating example of a typology that straddles the line between public and private space,” explains David Rockwell, founder and president of Rockwell Group. “Whether it is a backyard or a public green, lawns bring people together and foster a sense of community. So our goal was to create an indoor lawn that would inspire people to share stories, make memories and daydream, while honouring the great tradition of summertime.”

Belying the carefree sense of summer leisure, Lawn also tackles an increasingly controversial element of American life. Calls to retrofit – and even abolish – lawns have gained traction over the past decade. This is because, ecologically, most North American lawns are nothing short of a disaster. They provide no wildlife habitat, no biodiversity, no clean water and no food, all the while displacing native ecosystems in favour of a water-hungry botanical monoculture.

In fact, lawn care and related outdoor uses typically account for between 50 and 80 per cent of residential water consumption. In 2015, the historic droughts suffered by Los Angeles – and another 25 smaller cities – compelled the State of California to “pay residents up to $6,000 to dig up their lawns and put in fake turf and woodchips.”

Lawns are also culturally encoded as markers of white suburban life. Although their cultural prominence suggest a universal American reality, it’s one that doesn’t extend to people in urban centres, those without front yards, and everyone else left out of the narrow racial and socio-economic confines of the post-war American dream.

“The lawn is, and has always been, a status symbol,” writes Kate Wagner in Curbed. She goes on to explain that American lawn culture has roots in the manicured green spaces of European aristocracy, evolving to become “part of American suburban culture: white and middle class, inextricable from the mundanities of conventional nuclear family life and the act of childrearing.”

It’s difficult to square the cultural and environmental legacy with a lighthearted celebration. Luckily, Lawn is more than that. Translating the experience into a new and seemingly alien context, the exhibition suggests that outdoor pleasures needn’t be confined to a patch of grass – whether it’s in the backyard or on the National Mall. In the National Building Museum, the great hall brings the experience into a democratic, shared place. The fun is real, even if the turf is not.

Lawns as they exist today should mostly be confined to history. But this installation locates the lawn as a different kind of space – one that resides just as powerfully in the American psyche. There, at least, it might be a place worth keeping.

Lawn runs at the great hall of the National Building Museum until September 2.