These Stairs Are Made For Working
Dutch studio Mieke Meijer maximizes a small space with a multi-tasking Samba staircase. 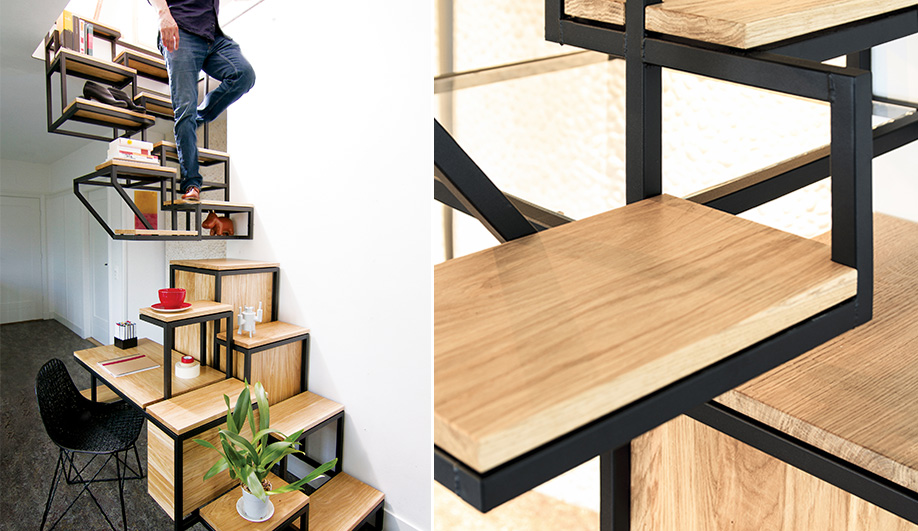 A renovated 1930s residence in Wassenaar, a suburb of The Hague, desperately needed an upgrade. The second-floor office and attic were haphazardly connected with an aluminum ladder, and the homeowner, an interior designer, sought out Studio Mieke Meijer for help. He was inspired by the burgeoning Eindhoven firm’s Industrial Archeology series.

“He appreciated the graphical industrial aesthetics,” says studio founder Mieke Meijer, “and the unorthodox way it considers function and shape.” So he commissioned Meijer to mimic that style in what would become the Objet Élevé stair, a daring system that might send shudders up the spine of a climacophobic.

Rather than a standard flight of stairs, the cramped interior called for a compact Samba arrangement that could be installed in pieces, enabling Meijer and her team to haul it up to the second floor. After seeing her initial design, the homeowner – who desired multi-functionality – suggested adding a desk, which fit perfectly. Meijer and her partner, Roy Letterlé, constructed the ensemble over three weeks, welding together a frame of black powder-coated steel tubing, then affixing handcrafted French oak planks finished with hard wax.

Half-width steps alternate up the skeletal structure (which also accommodates display space for knickknacks), and they skip the sheer gap up to the conspicuously suspended top unit. The break, needed to haul everything upstairs, also emphasizes Objet Élevé’s apparent weightlessness. Neatly integrated alongside, the desk reasserts the workspace around the gallery-worthy sculpture. Ultimately, Élevé is a perfectly engineered object: add anything, and it would be too much; take anything away, and it would fall apart.