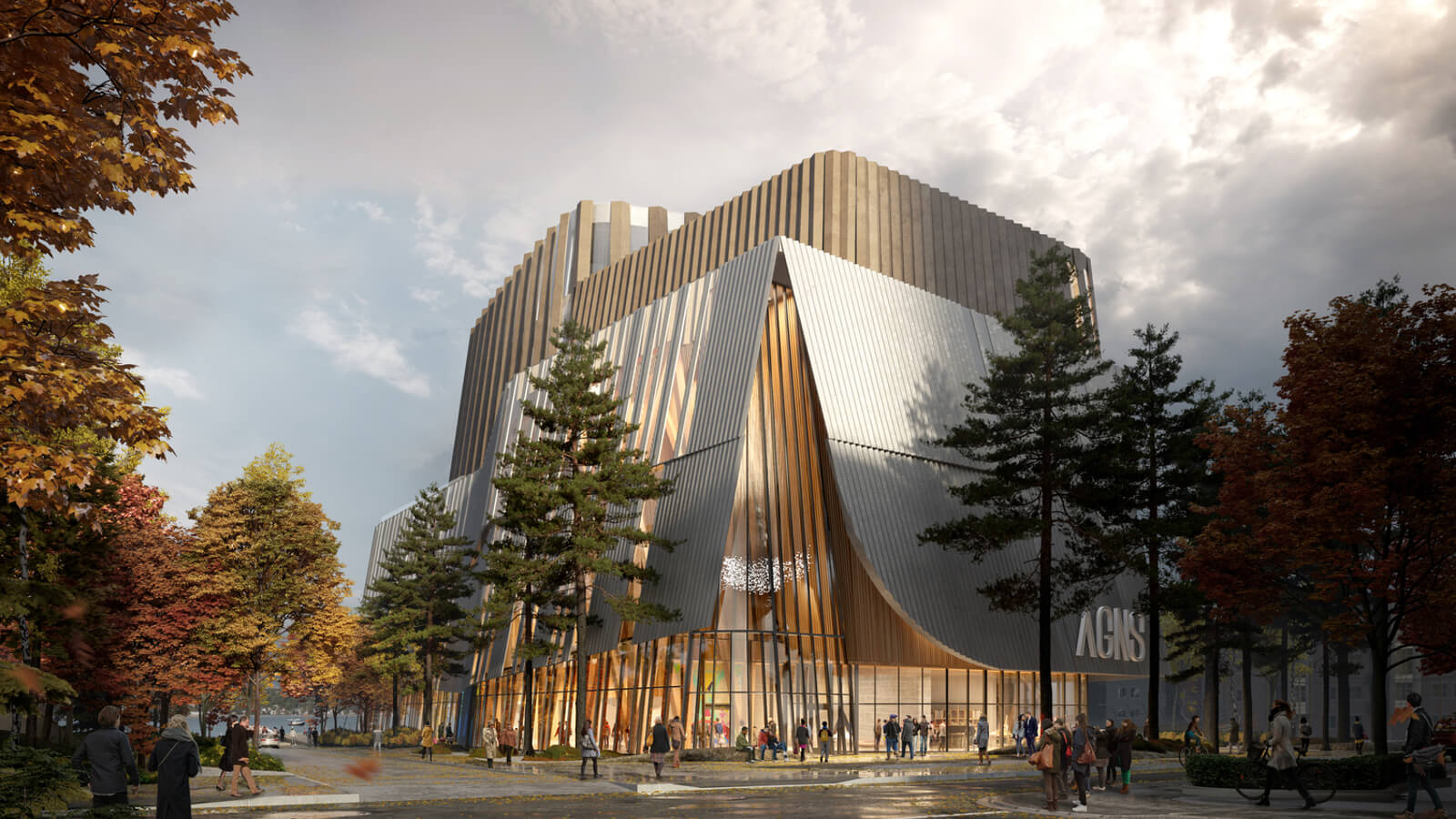 A team led by KPMB Architects with Omar Gandhi, Jordan Bennett, Lorraine Whitman, Public Work and Transsolar have been chosen to complete the landmark building in Halifax following an international design competition. 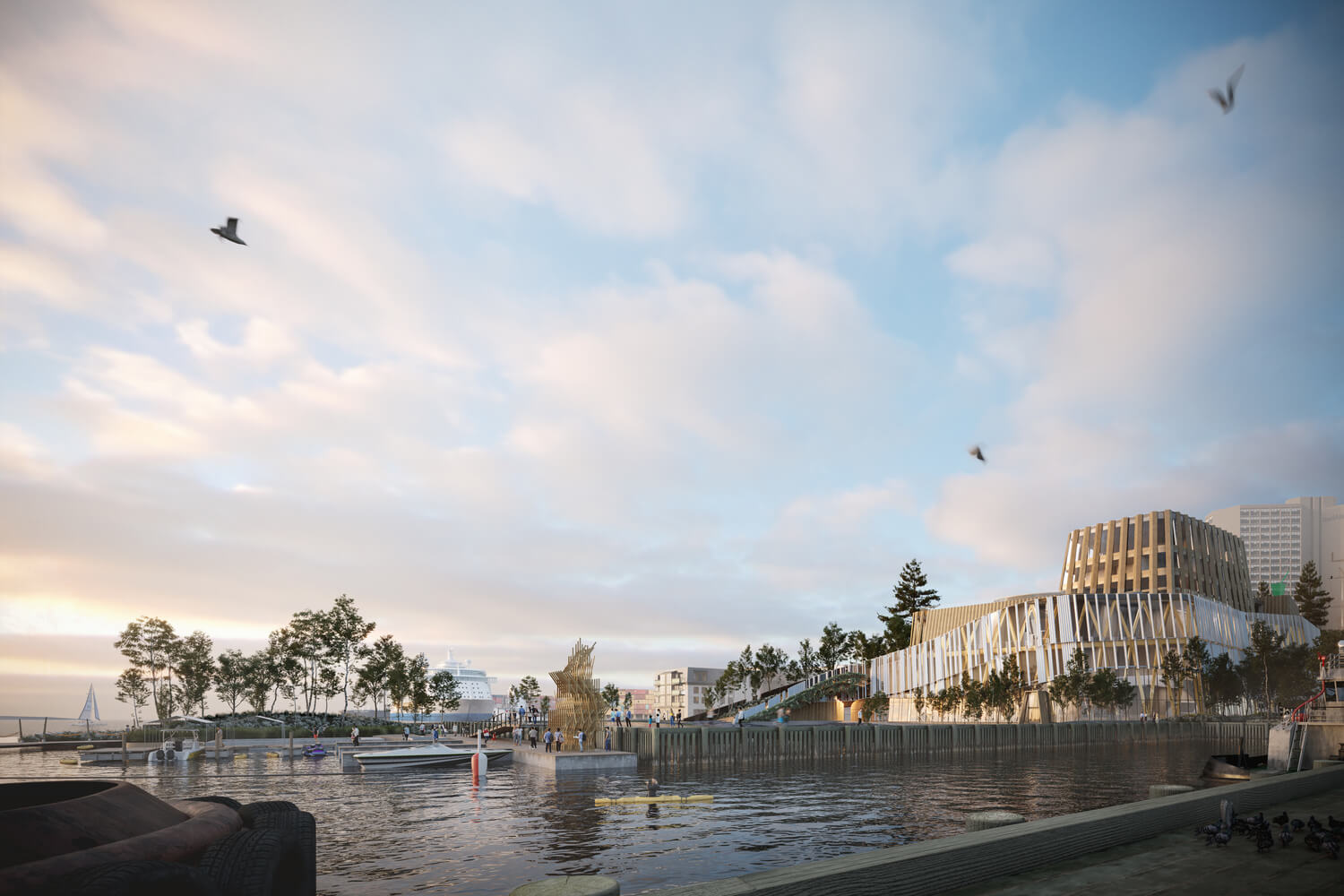 “It is the DNA of the proposed design, its sensitivity to people, public space and its incredible ambition to deliver on the brief’s many aspirations and criteria for the project, which lead to a unanimous recommendation by this jury,” said the seven-person adjudication committee in a collective statement. Chaired by New York-based architect and principal of WXY Architecture + Urban Design Claire Weisz, the jury also included landscape architect Claude Cormier and Sobey award-winning artist Ursula Johnson. 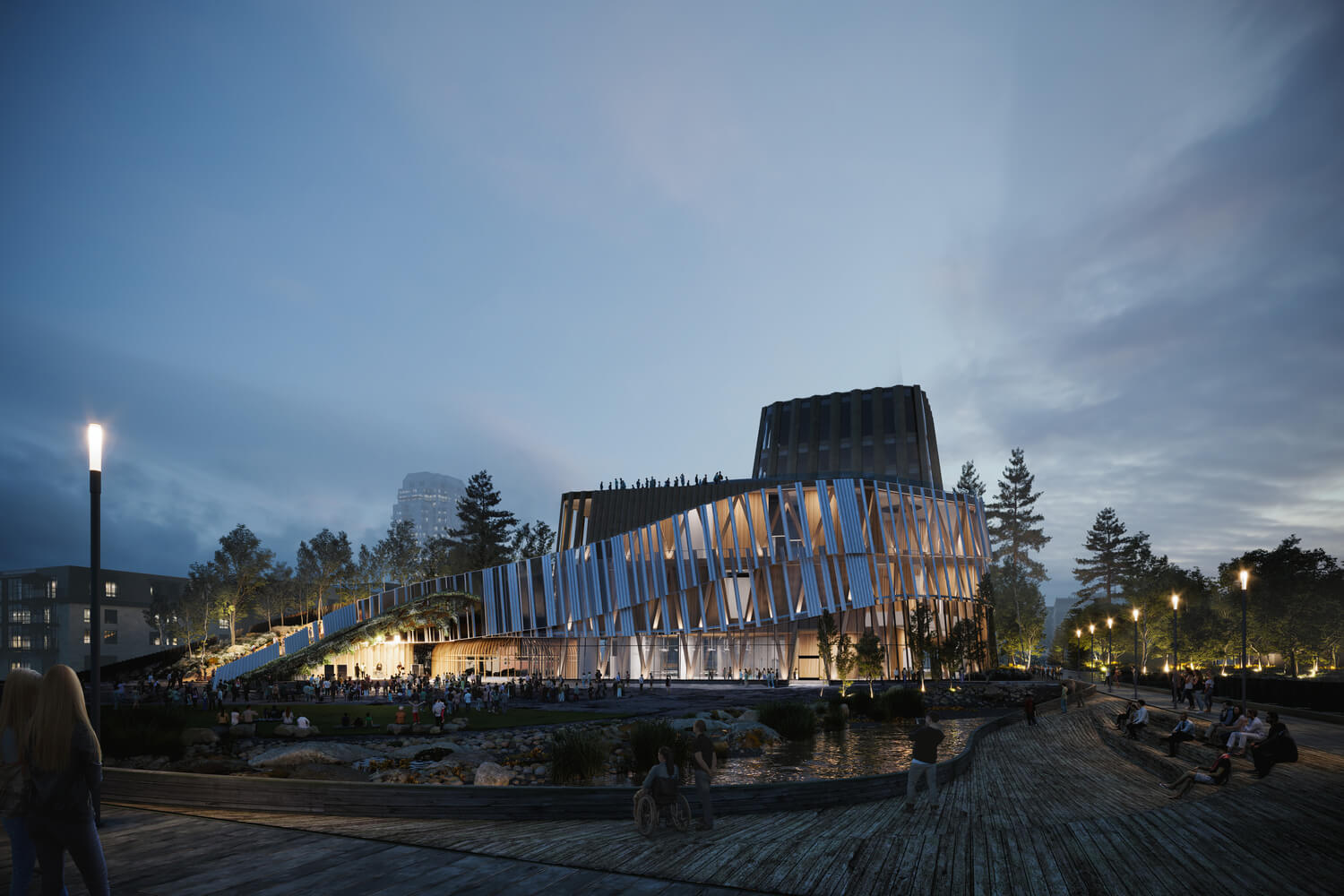 The chosen three-storey design sees a number of sustainable strategies coupled with a distinctive care and sensitivity to not only evoke, but connect with the deep history of the site and traditions the Mi’kmaw who have called the area home since time immemorial. Rooted in “Mi’kmaw ways of knowing,” the structure’s undulating footprint deliberately breaks away from the typology of the white cube to ensure there are “no places for energy to be trapped in corners,” Bennett says. 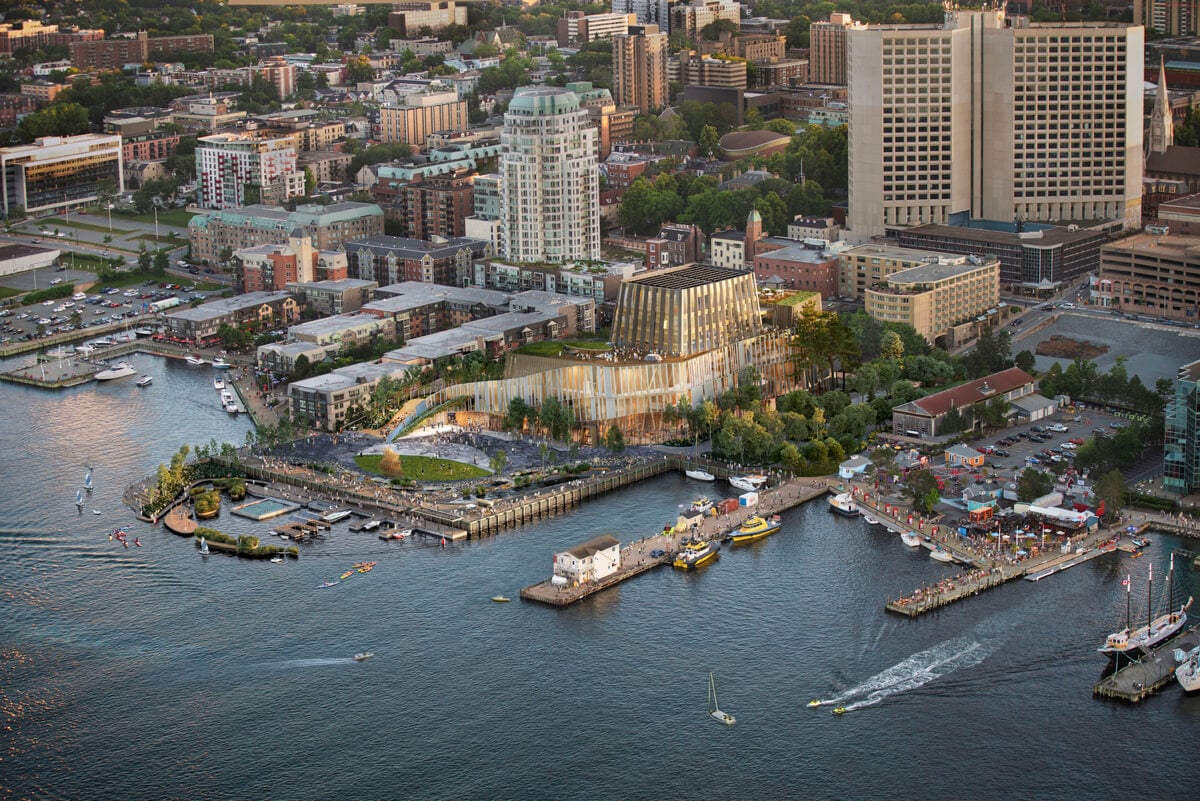 “We proposed a sinuous building surrounded by regenerative gardens that will signal a radical new beginning for the AGNS, the waterfront, Nova Scotians and the world of art,” said KPMB’s Bruce Kuwabara who, with fellow founding partner Shirley Blumberg, led the development of the scheme. 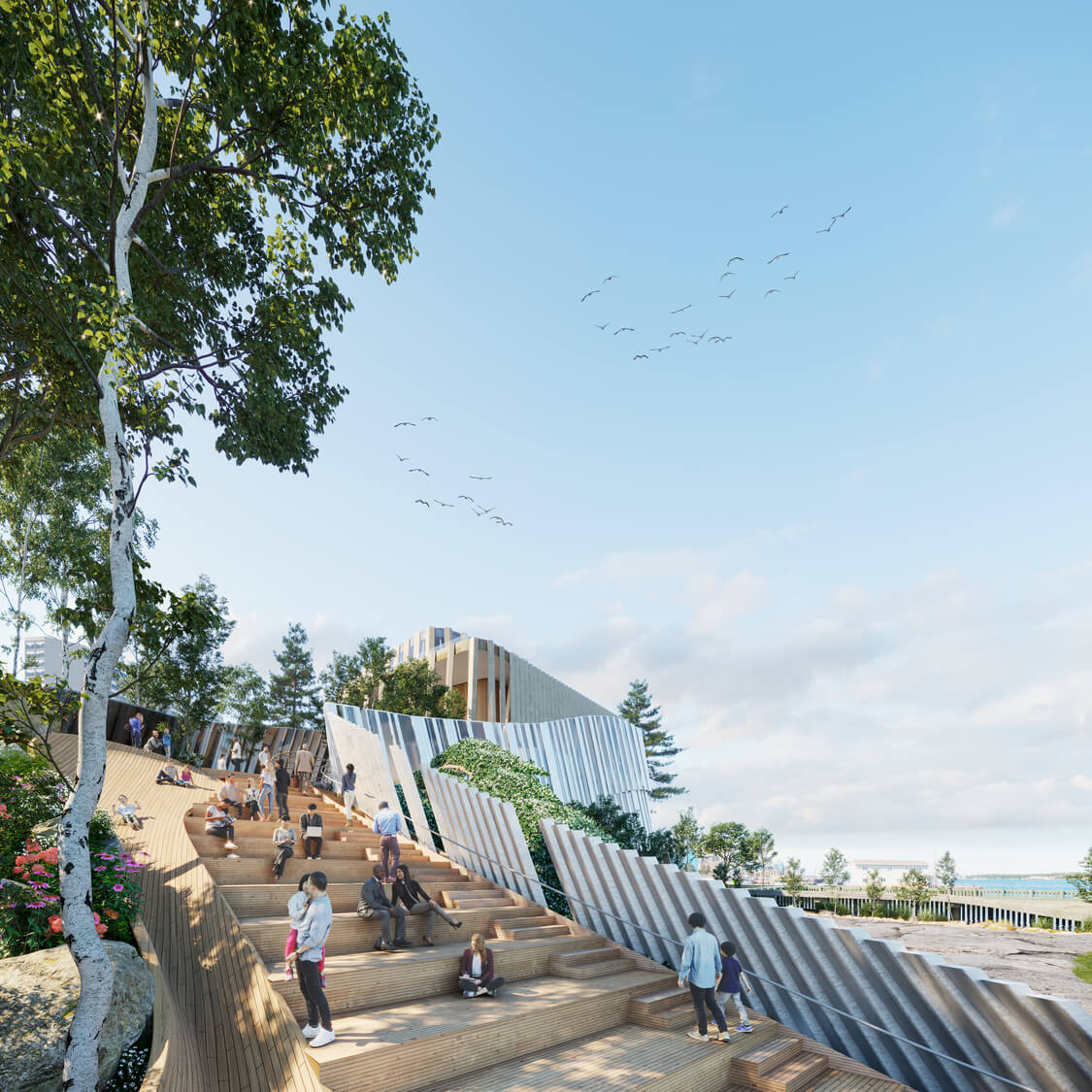 The complex’s dramatic footprint takes its inspiration from the form of a Kat (Katew) (eel) as it flows out from the K’jipuktuk (the Great Harbour) over the ground plane. The mercurial outline is reinforced by bands of terracotta cladding that, combined with the vertical patterning of the stacked wood gallery volumes above, recalls the structure of traditional Mi’kmaq baskets. According to Omar Gandhi, principal of his eponymous studio, this strategy “weav[es] together landscape and architecture to truly make a vital arts district.” 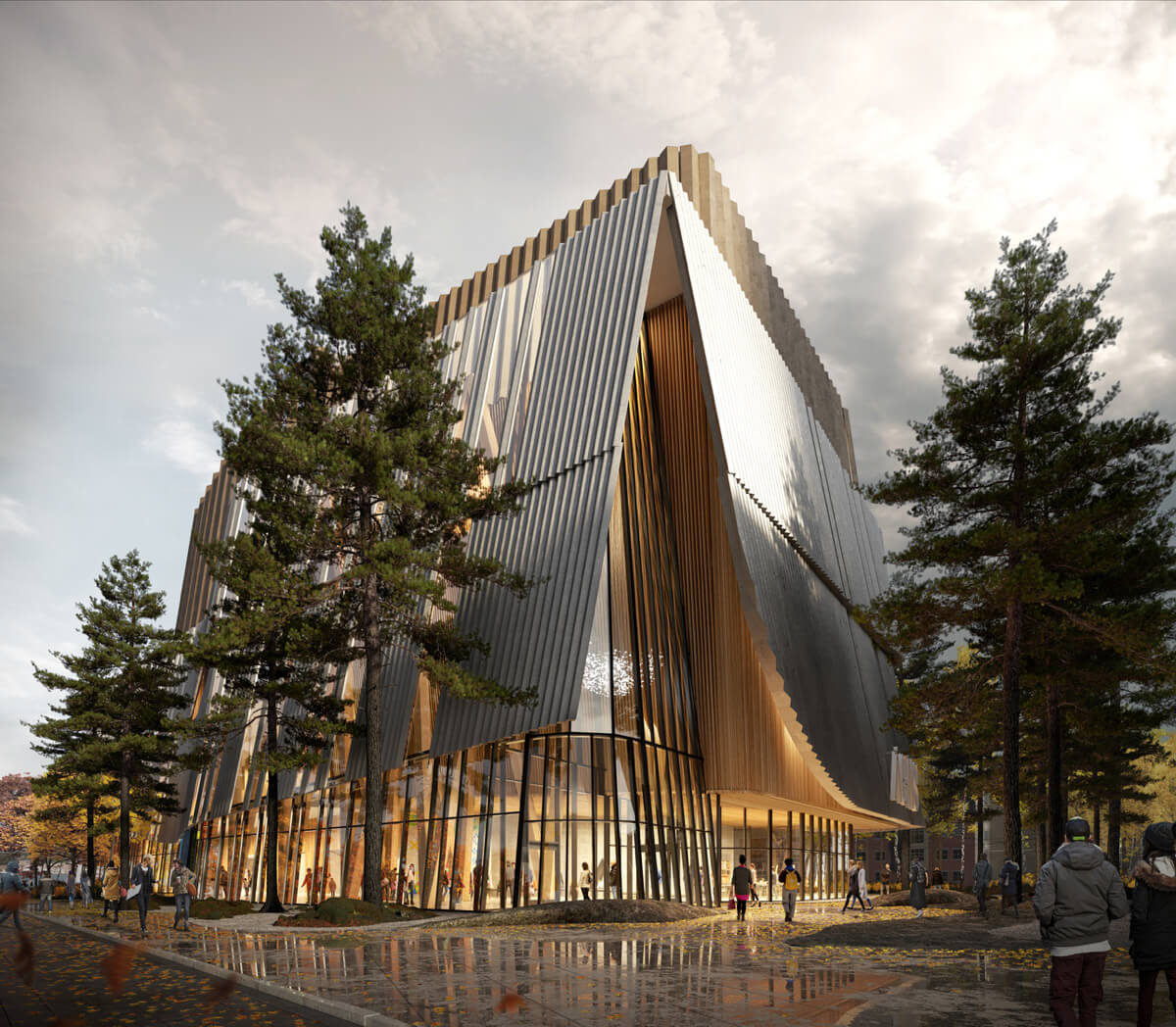 At the main entrance, a soaring roofline peaks in a nod to hats worn by Mi’kmaq matriarchs. Immediately within, the glazed atrium — known as the Mawiomi Odeum or ancestral gathering space — stitches the institution and community together in addition to providing long vistas into the surrounding landscape. The refined palette of wood, metal and terracotta continues from the outside to in as visitors move from the organic landscape to the generous auditorium and exhibitions halls within. 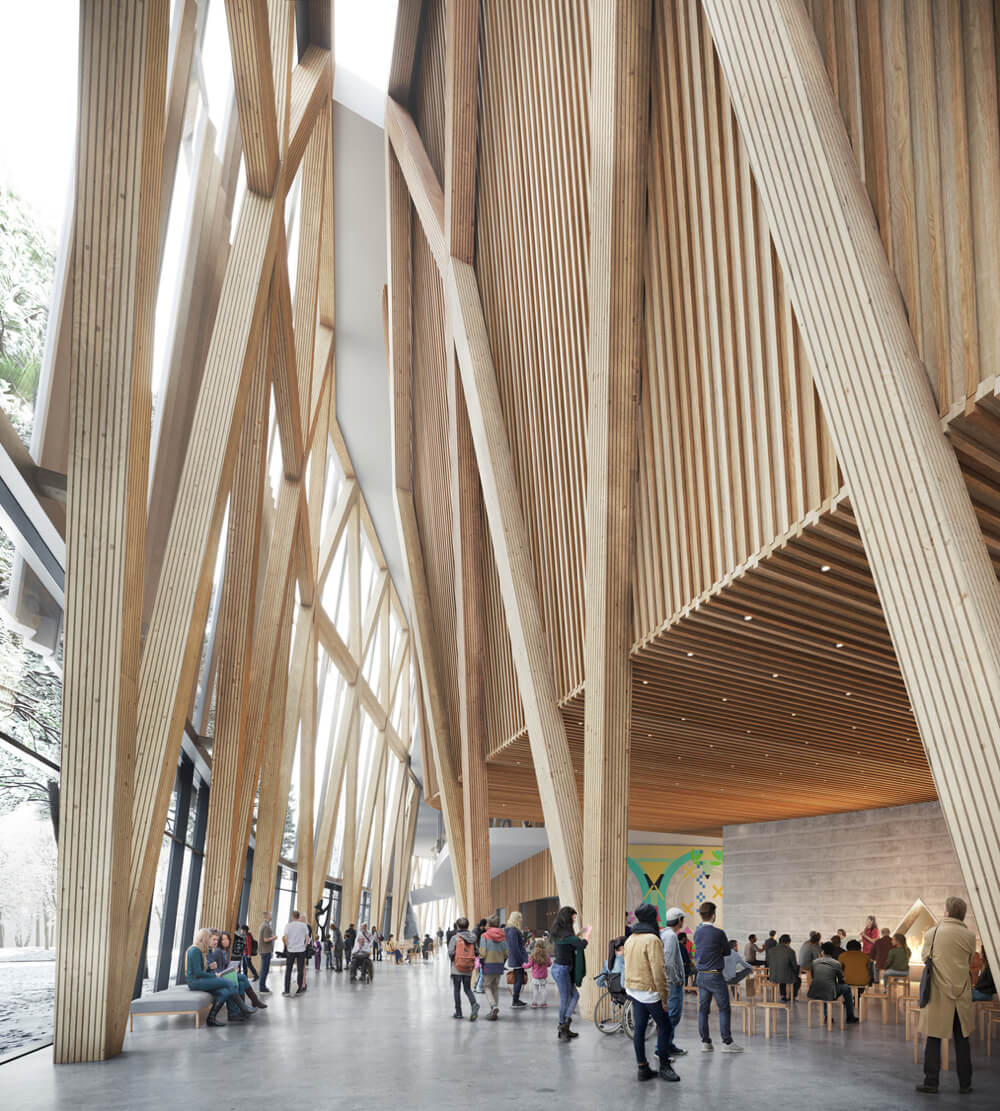 Near the tail of serpentine structure, an open-air gathering space dubbed “the Oculus” is framed as a communal environment that further bridges the institution with the pedestrian realm to “start a new circle,” according to Elder Lorraine Whitman. Enclosed in radiating wood fins, it’s set to become a hub within larger scheme, supporting both formal and informal gatherings. 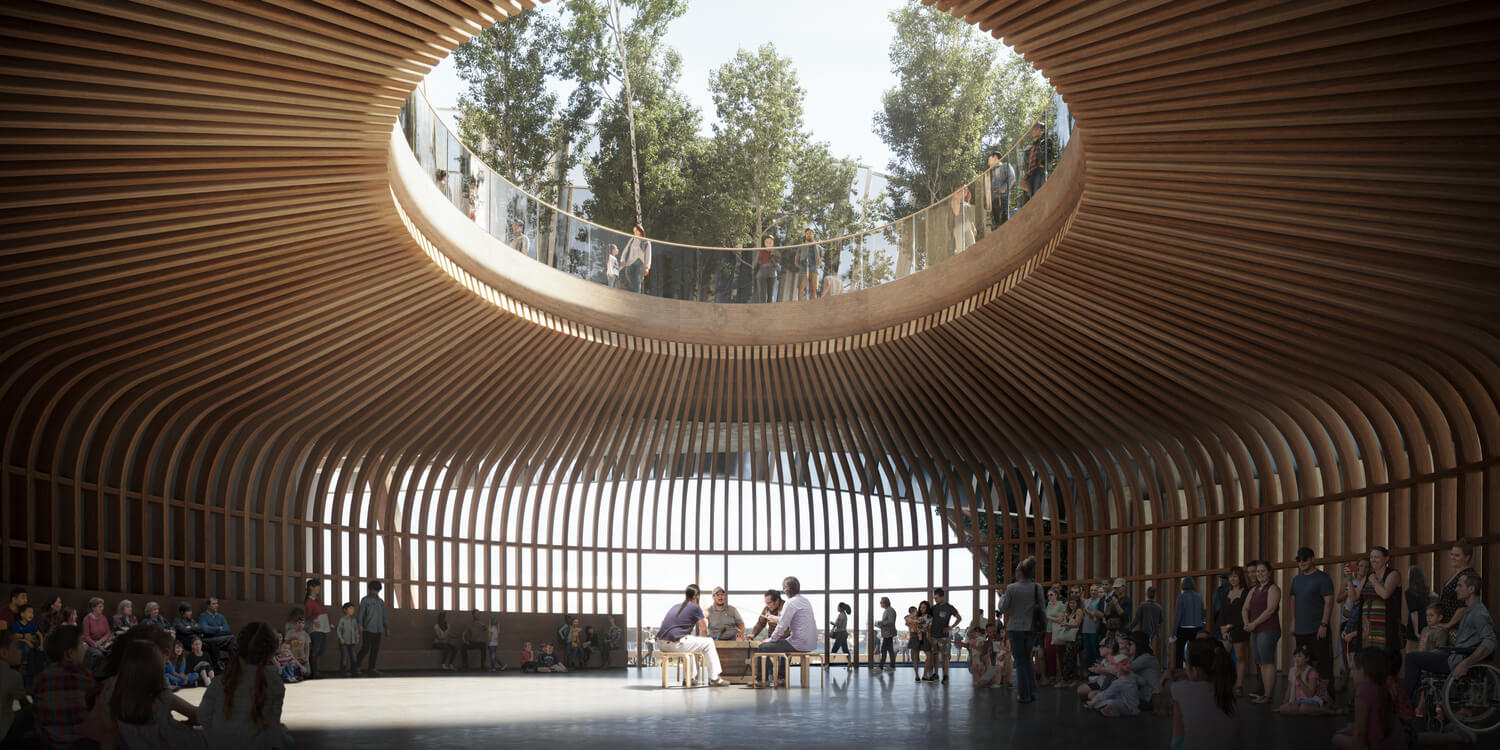 Not simply shaping the soon-to-be icon’s physical presence, Indigenous values and philosophies equally informed the building’s environmental agenda. Imbedded within the overall approach is Netukulimk — the Mi’kmaq concept of respecting all things. This imbedded relation to the surrounding environment manifests as a three-tiered sustainable strategy: passive design, a nature-based approach to rising sea levels and a commitment to leveraging local materials. “We do this by building on Indigenous knowledge and current science,” says Transsolar’s Tommaso Bitossi of the structure’s projected goal of net zero emissions by 2050. 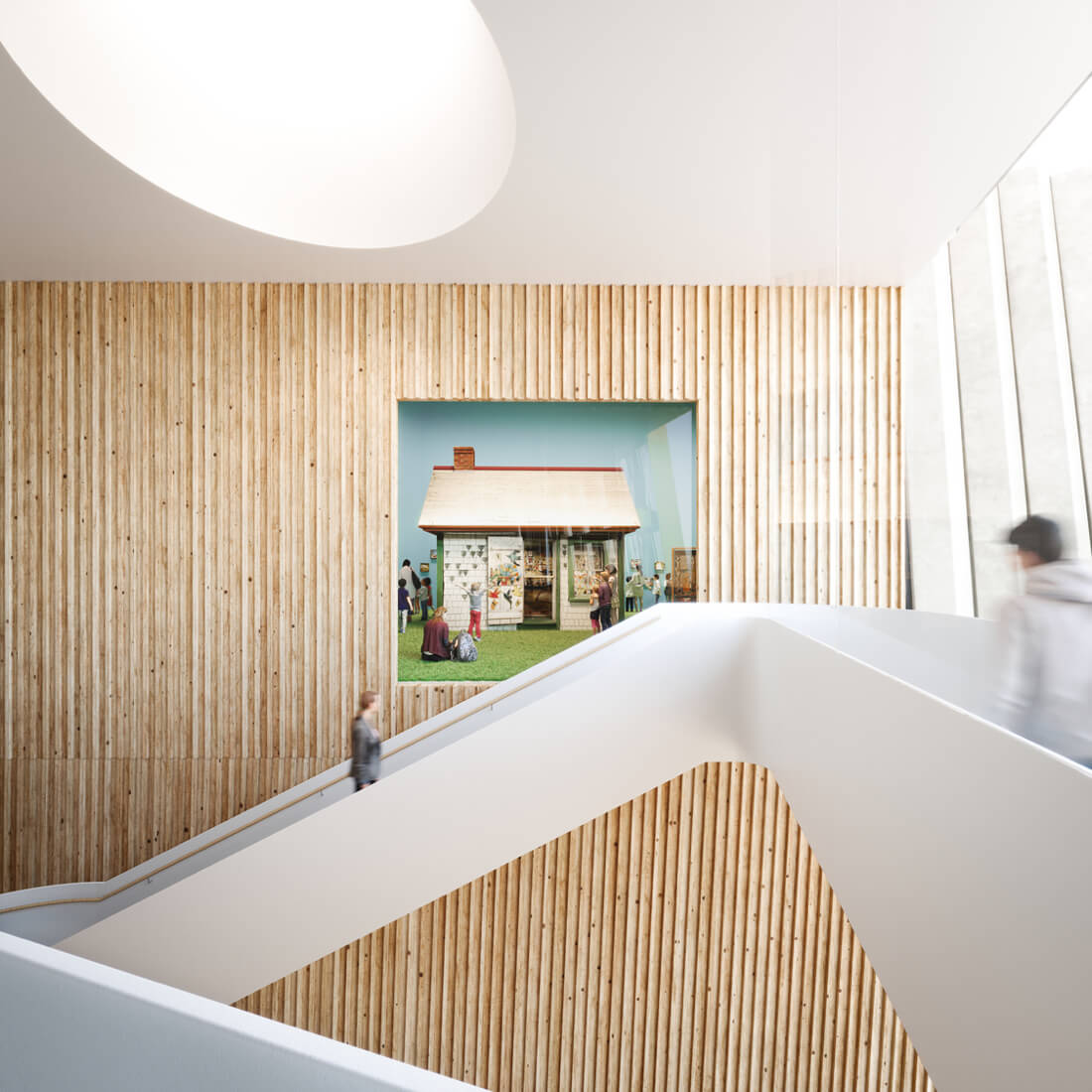 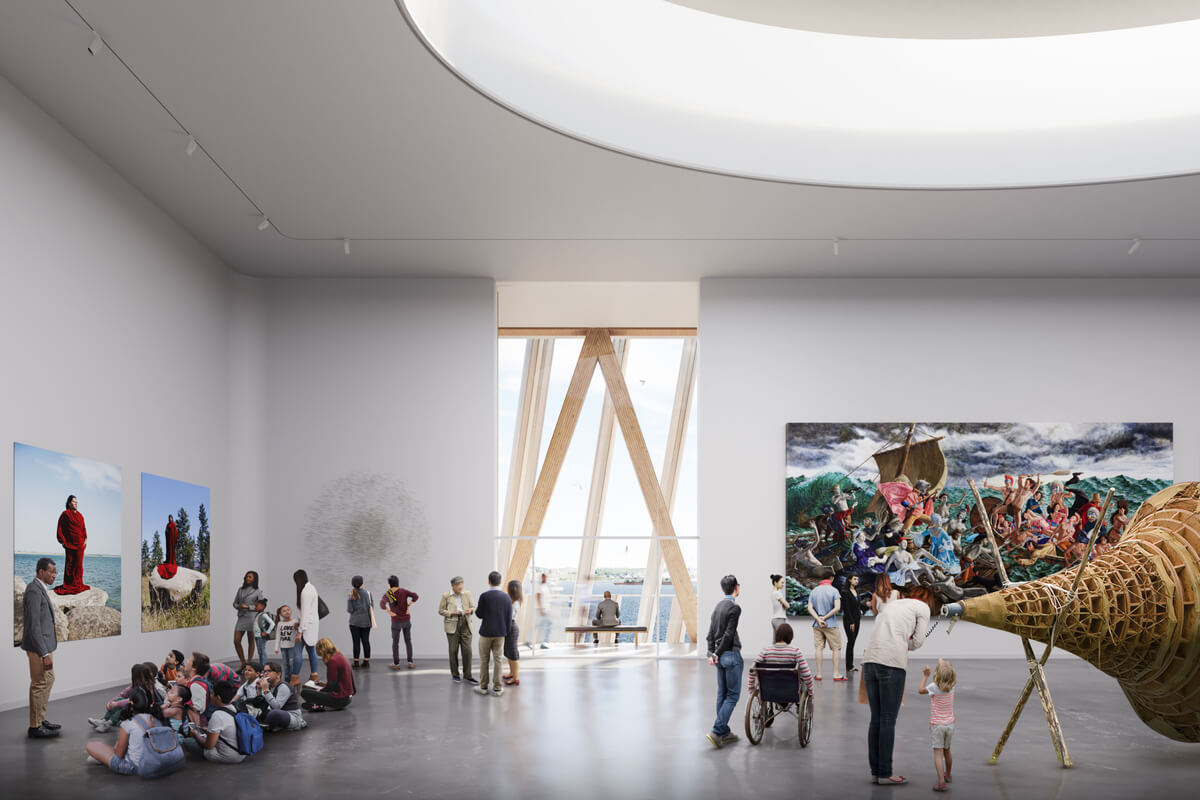 In what will undoubtably transform the urban fabric of the Maritime city, the team’s proposal is a generous, sensitive and striking addition that “will reflect the importance of art and culture to our lives,” according the the Province’s Premier Stephen McNeil. “We want people to experience art in a great setting,” Kuwabara adds. “We want people to feel welcome and at home. We believe we have created a place for everyone.” 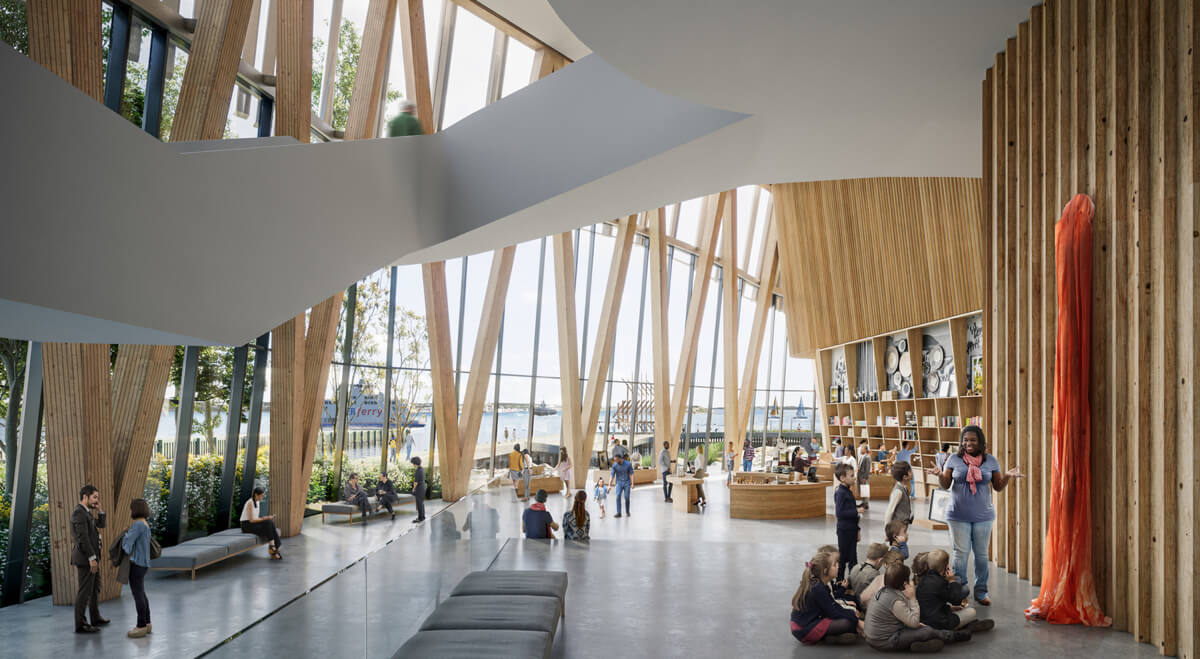 “This space is a presence — not in the traditional sense of imposing or aggressive, but rather it demonstrates the power of culture, unity, and positivity in the most respectful and creative way possible.” Whitman says, echoing the architect’s sentiment. “Quite simply, it’s breathtaking.”

A team led by KPMB Architects with Omar Gandhi, Jordan Bennett, Lorraine Whitman, Public Work and Transsolar have been chosen to complete the landmark building in Halifax following an international design competition.