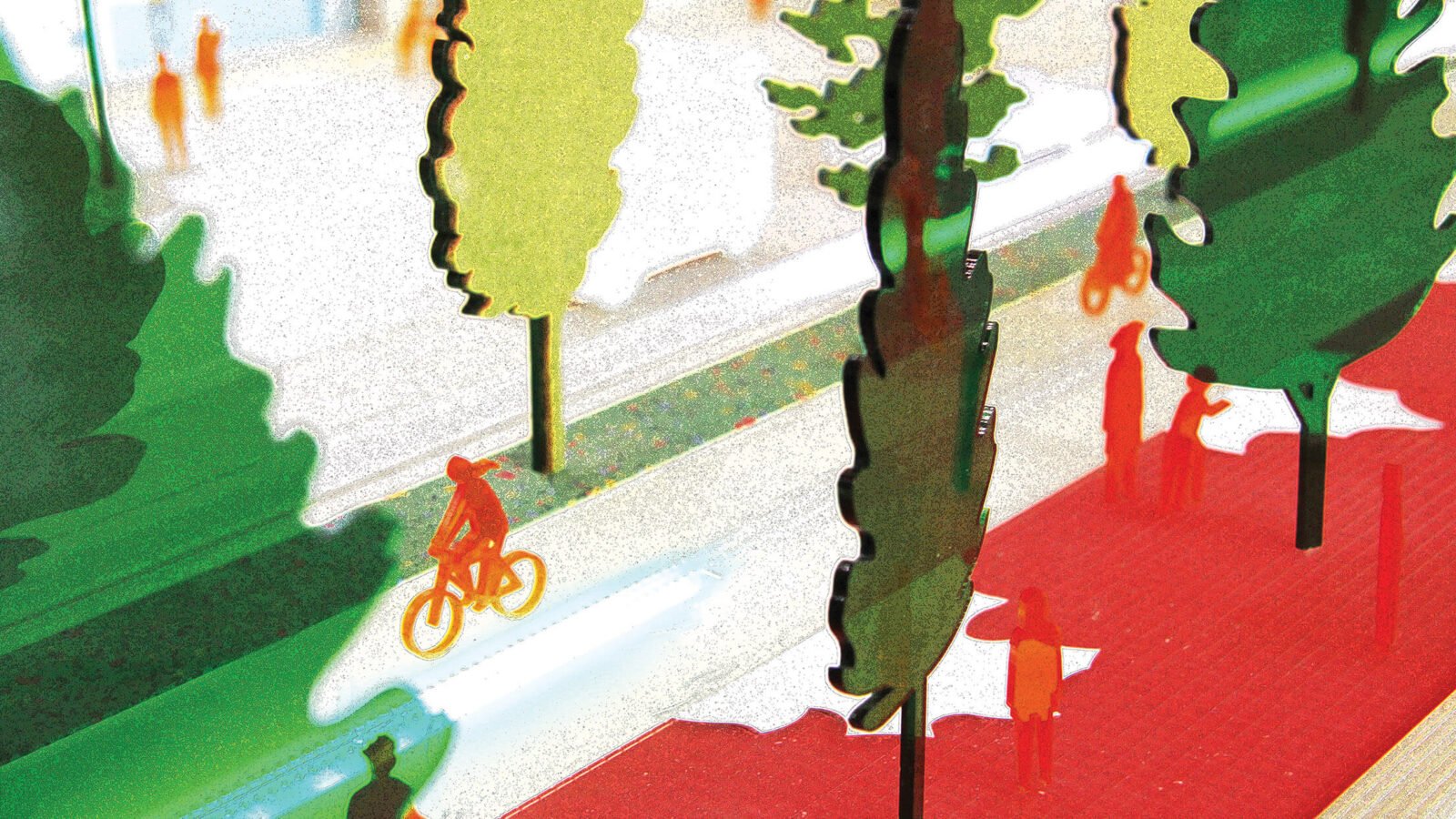 Despite considerable outreach and scrutiny, Sidewalk Labs remains mired in controversy. Why?

From the foot of Yonge Street, the short trip to Sidewalk Toronto’s central office captures a city in transformation. All around the Quayside district, surface parking and vacant lots are rapidly giving way to development as construction reinvents the lakefront with new housing, offices and schools. But past the cranes and concrete, the formerly nondescript, now brightly coloured building at 307 Lake Shore Boulevard East envisions another kind of city.

Inside, an ambitious concept of future life plays out in renderings, prototypes and scale models. Promising a mix of public and market-rate housing tailored to diverse demographics, prefab timber-frame buildings are complemented by dynamic, pedestrian-oriented public spaces. Futuristic servicing and water-management innovations round out this staggeringly comprehensive view of urbanity – one where even washing machines are streamlined into Sidewalk’s on-site power generation.

How can we assess it all? On urban development merits, it’s a compelling pitch. Writing in New York magazine, Justin Davidson argued that “Quayside is the new city that Hudson Yards might have been: mixed, flexible and humane.” Urbanist Richard Florida took it a step further, writing in the Globe and Mail that Sidewalk “can be the catalytic anchor company that can propel Toronto to the top of the heap in…‘urban tech.’ ” Though we only have hypothetical renderings to go by, it’s hard not to get excited when the likes of Snøhetta, Heatherwick Studio and the mass-timber pioneers at Michael Green Architecture have had a hand in creating them. Even disparaging editorials take on an implicit note of optimism when paired with these images of utopia.

All the while, Sidewalk struggles to control the narrative. Despite community engagement efforts far beyond the scope of most Toronto development projects, Sidewalk Toronto remains mired in controversy. A robust public consultation process has helped refine the plans, with some 21,000 Torontonians having participated in community meetings. Sidewalk’s 307 hub – opened in 2018 – provides a year-round venue for discussion and debate. In the name of transparency, Sidewalk CEO Dan Doctoroff has even repeatedly invited Torontonians to “Ask Me Anything” via Reddit. But for all the outreach, doubts persist.

Compared to the myriad construction projects on the site’s doorstep (which shy away from Sidewalk’s architectural and urban ambitions), the project has faced outsized scrutiny. Understandably so. Cameras and sensors would be everywhere, capturing a wealth of data to “optimize” everything from the layout of the street to the availability of retail space. The spectre of surveillance capitalism continues to dominate the discourse – a problem that’s plagued the project from the start, despite Sidewalk’s deepening commitment to protecting privacy through an externally managed data trust. Outside 307, an Apple billboard looming over the site addresses the dissension, proclaiming, “We’re in the business of staying out of yours.”

New Apple billboard outside Sidewalk Toronto HQ: “We’re in the business of staying out of yours.” pic.twitter.com/I24iAxkXzZ

While data privacy monopolizes the public consciousness, the project’s problems are far more fundamental. They are rooted in the very first step taken to create the partnership between Waterfront Toronto and Sidewalk Labs: In early 2017, a request for proposals from tripartite government agency Waterfront Toronto called for “an innovation and funding partner” to spur the development of the five-hectare Quayside site. With the goal of developing a test bed for new urban technologies, the RFP also touts the sharing of revenue from new intellectual property derived from the project. The government sought a partner to develop ideas and share in revenue. Sidewalk Labs fit the bill.

Before Sidewalk’s bid was selected, the RFP should have anticipated what was to come. The innovation and funding partner was tasked with both identifying urban problems and proposing their solutions, partially divorcing the terms of innovation from public control. Sidewalk’s technologies and its proposed model of revenue-sharing and governance merely fulfill the request of all three levels of government. In exchange for accepting a degree of risk, responsibility, monetary investment and stewardship, the Google affiliate has promised Toronto the city of the future. Is it worth it?

The Quayside project’s awkward genesis makes any points of comparison fundamentally incongruent. Can we weigh ostensibly progressive urbanism against corporate control of governance and tax revenue? How much privacy should we give up in exchange for sustainable architecture or pedestrian-friendly streets? The questions are frustratingly abstruse, but the impasse in answering them is itself illuminating. In Toronto, the debate about the future of the city cannot hinge on the merits of urban technology alone; it must also consider the corporate forces that shape its implementation. Long before a single brick – or high-tech prefabricated wooden beam – is placed, Sidewalk Labs laid out the terms of the smart-city era.

Despite considerable outreach and scrutiny, Sidewalk Labs remains mired in controversy. Why?