Revisiting the World of Vito Acconci, 1940-2017
Experimental artist and architect Vito Acconci died on April 28, 2017, at the age of 77. We're remembering Acconci with this, a story from our October 2007 issue about his unexpected foray into architecture. 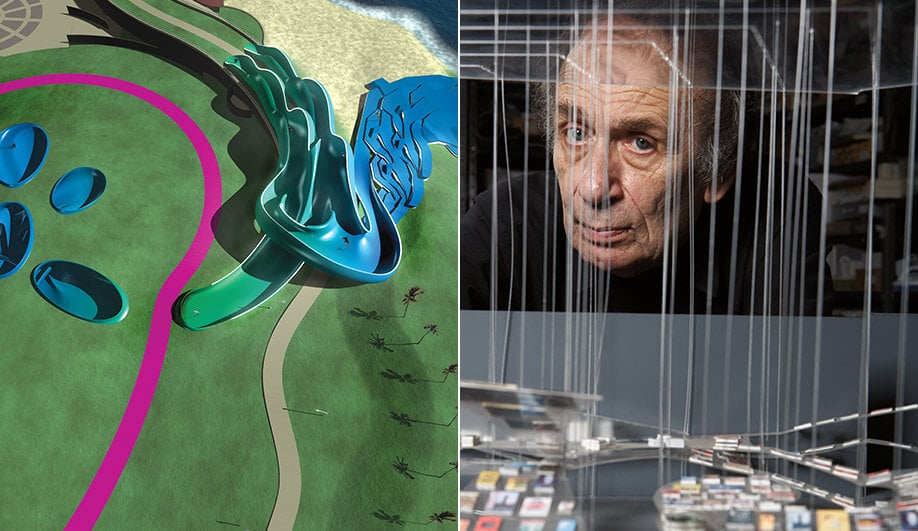 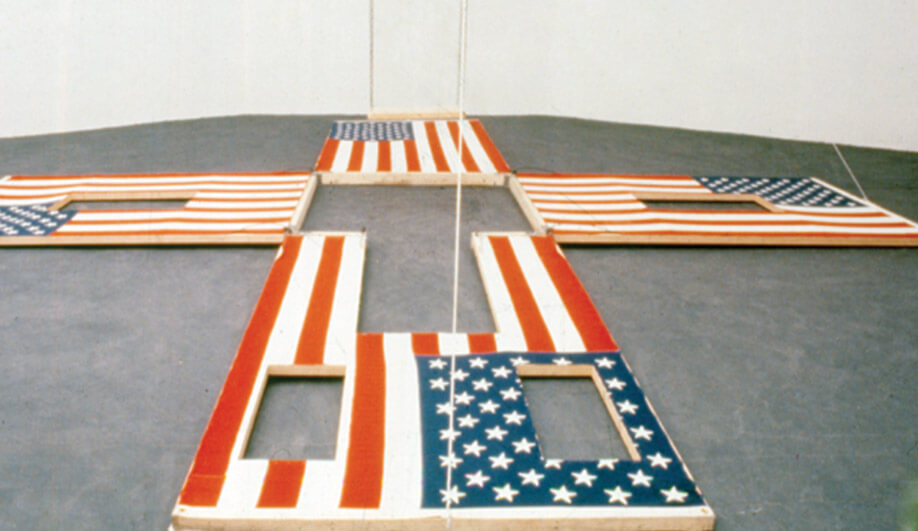 In 1980, Vito Acconci presented an interactive installation titled Instant House. When viewers sat on the swing, pulleys raised the four walls around them. “I wanted a viewer to, in effect, make the architecture,” says the artist. 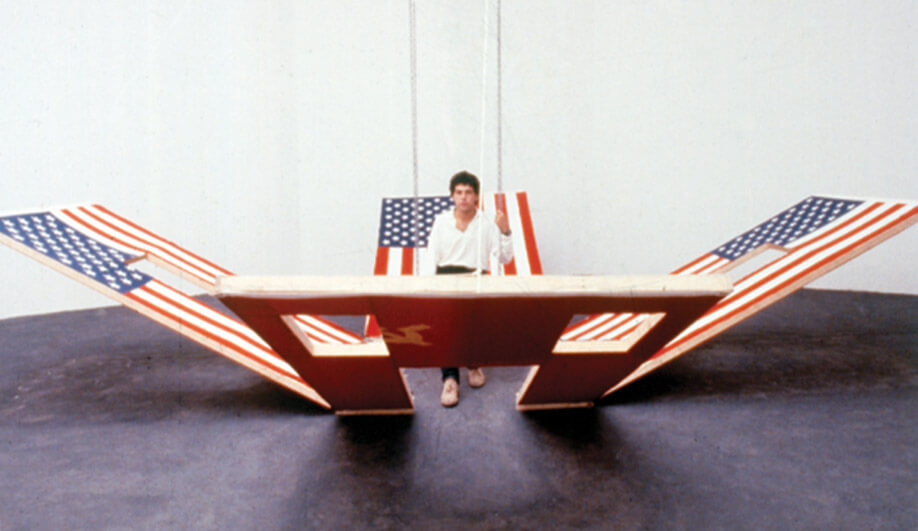 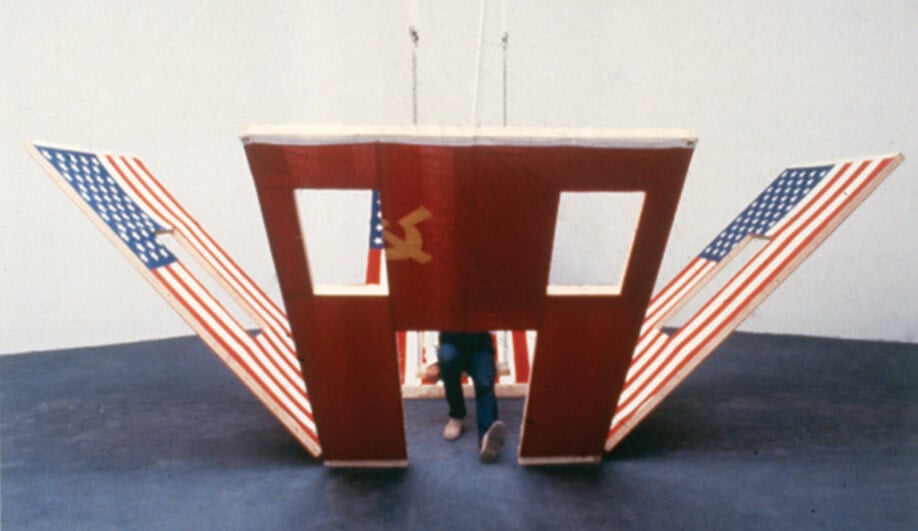 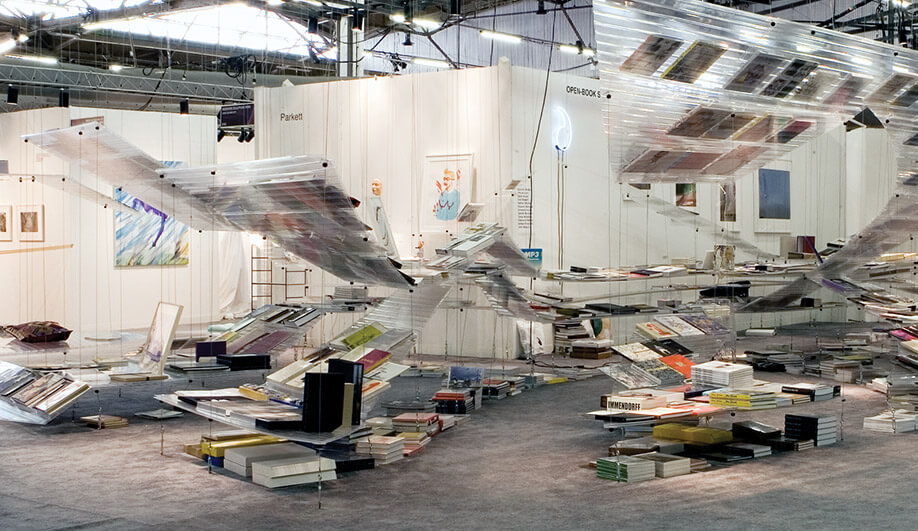 Over the years, Acconci has created temporary bookstores, including nthis one for the Armory Show, held in New York this year. The shelves are nsuspended from the ceiling and sway slightly when browsers handle the books. 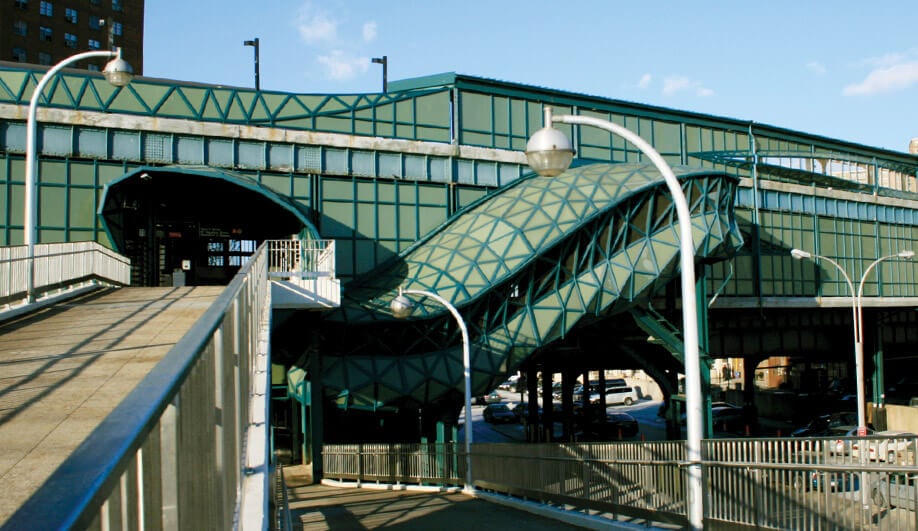 Acconci’s facade for the West 8th Street subway station, near Brooklyn’s Coney Island, was completed in 2004. Its form undulates like a geometric wave, swallowing stairwells and rippling across walls.n 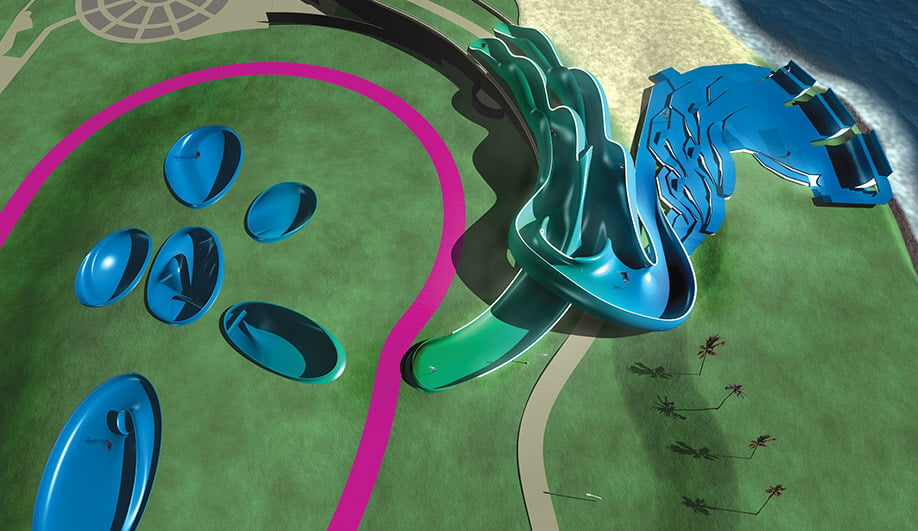 Plans for A Skate Park That Glides the Land & Drops Into the Sea, a recreational park in San Juan. The design was completed in 2004, though it’s not likely to be built. 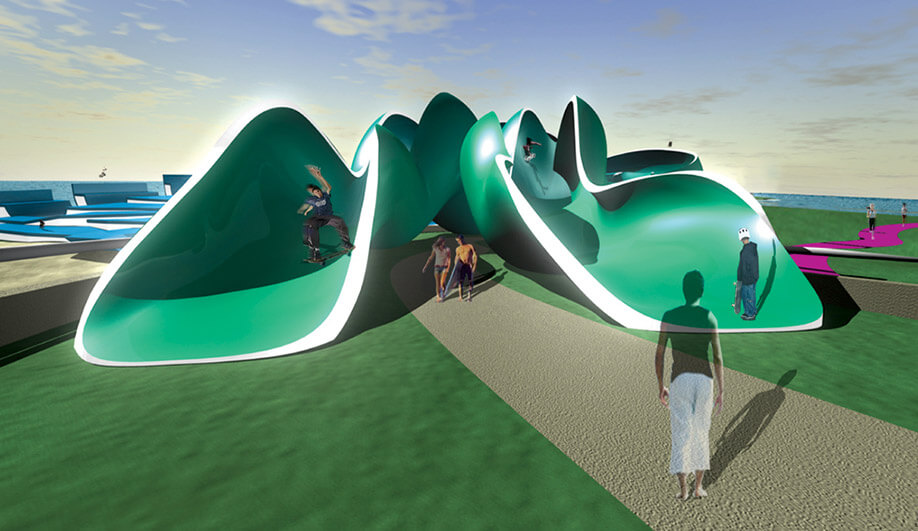 Acconci’s plan includes amorphous halfpipes made of concrete that would lift skaters into the air, drop them into deep underground bowls and send them out to aqua-coloured halfpipes at the water’s edge. 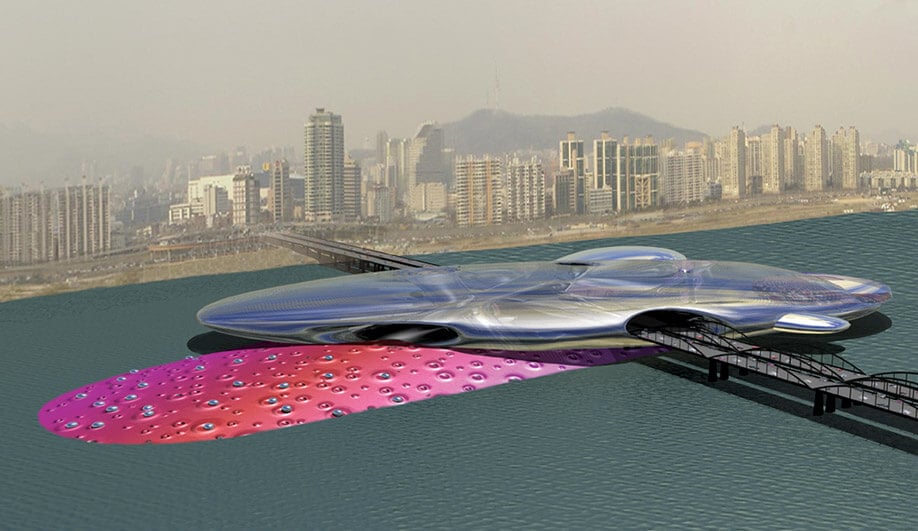 One of Acconci’s wackiest proposals is a floating performing arts centre designed in 2005 for Seoul. The centre’s ­spaceship-like form canti­levers off a base and hovers above the water. 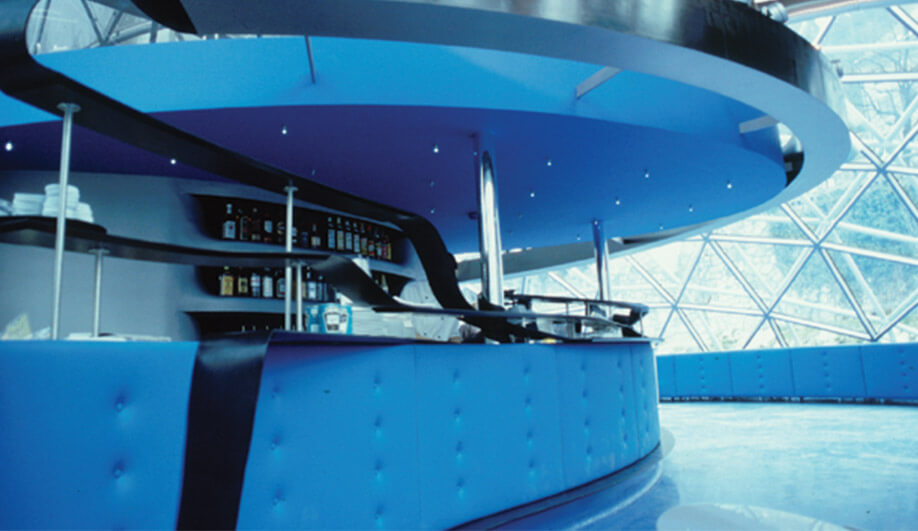 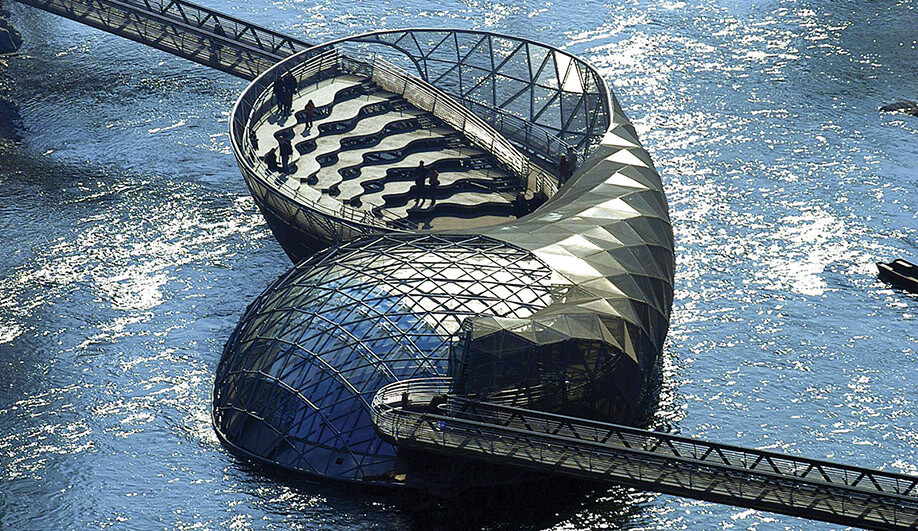 We’re remembering Acconci with this, a story from our October 2007 issue about his unexpected foray into architecture.

“The people in this studio think of themselves as architects,” says Vito Acconci, dressed all in black, sipping black coffee from a paper cup. “We all think of what we do as architecture and design.”

It’s an important point to make, because from where we’re sitting, in a cramped corner of Acconci’s Brooklyn studio, it’s hard to tell. The room is filled with dozens of filing cabinets stuffed with notes, drawings and photographs of art proj­ects past and present. The walls are lined with racks of tape reels and videocassettes that document Acconci’s prolific creative output since the late ’60s, when the Bronx-born artist first emerged as an important conceptual artist.

Located in a former industrial building below the Manhattan Bridge, just steps from the murky banks of the East River, Acconci Studio is a creative cauldron for eight busy employees. Acrylic models and renderings tacked to the walls share visual space with mannequins, mismatched furniture, overflowing ashtrays and spilled coffee grounds. Permeating everything is an ambient electronic recording pumping out a beat-free sonic landscape that would be an ideal soundtrack for a futuristic space lounge. But peek over the shoulders of the people hunched in front of computers, and their mandate becomes clear: onscreen, formally trained architects are developing wildly amorphous buildings, bridges and architectural installations for sites from rural France to San Juan to Toronto.

“I was never really so interested in viewers,” he says in his gravelly voice while deconstructing cigarette filters between his fingers (he recently quit smoking). “I was always much more interested in participants and interactive agents. In some ways, I realized that if I was more interested in a person using something and participating in something rather than viewing something…” He pauses mid-sentence, weighing his words. “Design does that; art really doesn’t.”

His work started to take a real architectural twist in 1980, when he completed Instant House, a gallery installation consisting of a swing attached to pulleys that raised four walls when a visitor sat on it. “I wanted a viewer or visitor to, in effect, make the architecture,” he says.

But Acconci still felt unfulfilled. The Instant House structure was temporary; stuck within the confines of a gallery, it remained a work of art. In 1984, he went further with Bad Dream House, an architectural sculpture consisting of three upside-down, off-kilter houses with simple gable roofs. People were invited to explore the stack of houses from the inside out. “The installations were almost trying to treat a gallery or museum as if it were a plaza or town square,” says Acconci. “But I was kidding myself. A gallery or museum is never going to be a plaza or town square. It’s never going to be a public space.” 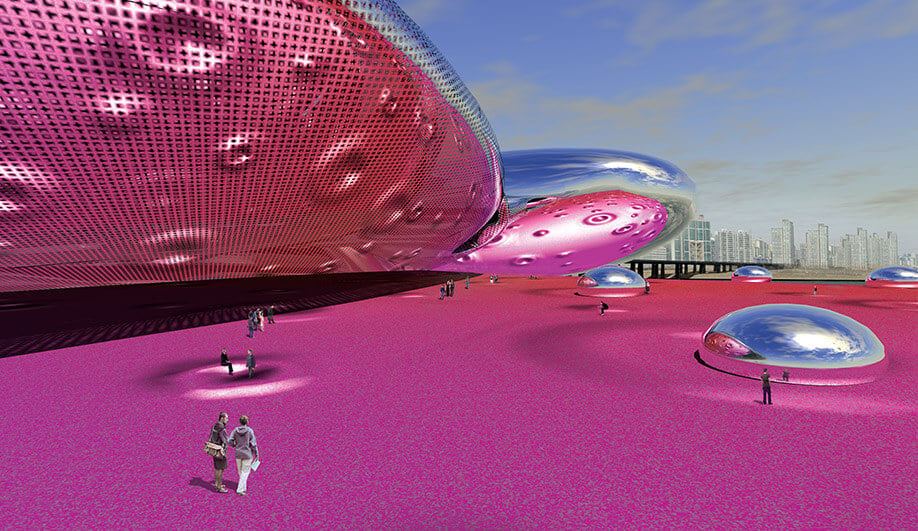 The pink reflective surface of the base is designed to be walked on. Larger craters that look like giant air bubbles are capsule hotel rooms. 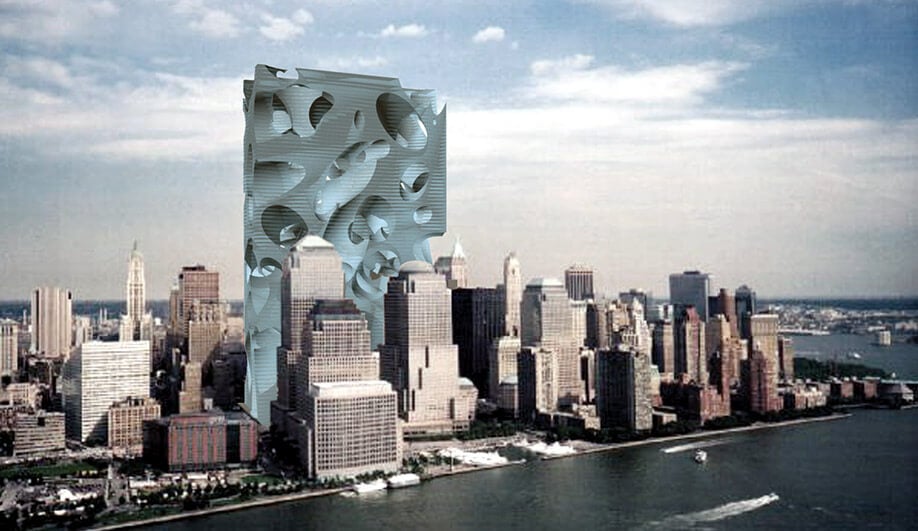 For the new World Trade Center, Acconci proposed a 110-storey tower full of holes – a Swiss cheese-like structure that was u201cpre-shot, pre-blown-out, pre-exploded.u201d

There was only one way to break out of the gallery circuit and address people on city streets: in 1988, he founded Acconci Studio, officially signalling his switch from art to architecture and design. Since then, his conceptual output has been enormous, though few of his projects have been built. The studio’s work is highly inventive, at times bordering on the fantastical. In a 2005 competition for a performing arts ­centre in Seoul, for instance, Acconci’s team proposed an organically shaped, self-contained island with a mirrored shell that would hover above a floodable base. Individual hotel capsules would be scattered around the base, and, tethered to the ground by pistons, they would float upward as the water rose.

For San Juan, in the same year, he designed a wildly twisting tubular skateboard park made of blue and green concrete, which would lift skaters into the air, drop them into deep underground bowls, and send them out to aqua-coloured halfpipes at the water’s edge. In response to a 2002 brief for rebuilding at the World Trade Center site, he proposed a tower full of holes – a Swiss cheese-like structure that was “pre-shot, pre-blown-out, pre-exploded.”

While these designs will never be built, several of Acconci’s other ideas have been brought
to life. One of his earliest architectural projects was designing a new facade for Manhattan’s Store­front for Art and Architecture, a project he completed with architect Steven Holl in 1993. Made up of a series of large panels that swing open on vertical and horizontal hinges, the facade can be customized for different exhibition needs, or entirely opened to the outdoors, dissolving the barrier between gallery and street.

More recently, Acconci completed a facade for a Brooklyn subway station near Coney Island, which also plays with the notion of dissolving barriers. There, the station’s steel framing undulates like a geometric wave, swallowing stairwells and rippling across walls. The ripples peel the surface open at numerous points to provide views to the ocean and amusement park beyond. At the same time, the cladding twists down, creating public benches. “We wanted to do something that rather than announcing itself as a seat just starts to bulge in and out, becoming a place you can sit,” he says. 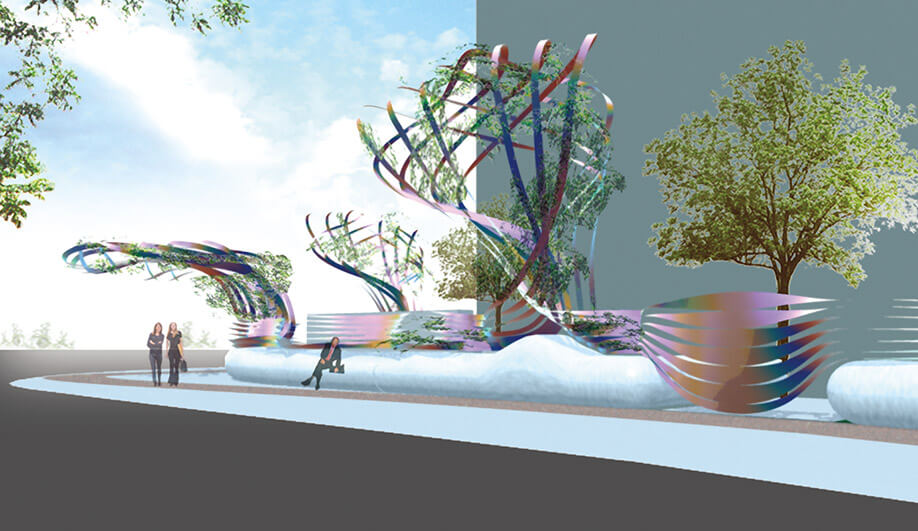 Now under construction in Toronto is WaterParkCity, a public park where trees cannot be planted because of underground utilities. Acconciu2019s scheme involves nearby property owners planting vines that will grow into the park to create a green canopy over public benches.

The studio’s design for the perimeter of the WaterParkCity condominiums near Toronto’s harbourfront follows a similar logic. Financed by the city’s Percent for Public Art program – which recommends developers spend one per cent of their gross construction budgets on art – it deconstructs a fence that would otherwise be used to separate private yards from public sidewalk, and reshapes the structure into public seating that undulates between the two spaces. Along Fleet Street, where underground utilities prevent tree planting, Acconci is calling for ­balloon-shaped steel trellises that, when planted with vines, will provide shade over the sidewalk. To work, the plants will have to grow over from the private side.

“We took from the private patio and made something for the public space,” says Acconci. On a corner where there are retail spaces at ground level, the fence will give way to broad loops of steel, which will also provide places for people to sit. “We wanted to make nothing, but nothing with a function,” he says of the project, now under construction. “This corner was air. Could the air turn into seats? We didn’t know how to do that, but this loop system was a way to embody air.”

While both the Brooklyn and Toronto proj­ects are innovative, Acconci has further aspirations. In fact, he still feels dogged by his background as an artist. Both the subway station and WaterParkCity are technically public art, and they presented the studio with a limited scope. “I wonder if public art is kind of a folly, a kind of extra,” he says. “We’ve recently committed ourselves to not accepting public art projects.”

If Acconci’s relatively short history with building permanent structures is any indication, that decision means there is much to look forward to. His largest independent work to date is a structure called Murinsel (Mur Island), in the middle of the Mur River in Graz, Austria’s ­second-largest city. Connected to the banks on both sides of the river by pedestrian bridges, the building is a knot of steel, Lucite and glass. Its loosely defined spaces function as a theatre, a playground and a café. The theatre’s bleacher seating snakes back and forth, encouraging ­visitors to sit face to face, and to gather even when the theatre is not being used for formal events. In the café, bands of blue upholstery twist and wrap around the room, creating benches and a bar with multiple levels.

Since completing Mur Island in 2003, Acconci has secured a number of even more ambitious commissions. In the port of Boulogne-sur-Mer, in northern France, he is designing a revolutionary retractable bridge in collaboration with engineering firm ftl/Happold. The bridge has space on the inside that will function as a restaurant. Building on his Mur concept, to avoid interrupting diners when boats need to pass Acconci designed the bridge to coil like a snake. The retraction will rearrange the interior space but keep the floor level so diners can remain seated. “We crave engineers,” says Acconci. “I think the only architecture that means something is architecture that tries to reinvent some kind of engineering.”

In Beaumont, in the economically depressed Ardèche region in southwestern France, Acconci was asked to help bring the sleepy village into the 21st century. Inspired by the terraced slopes surrounding the village, he is designing tubular houses that will be dug into the landscape so as to merge with the hills.

Regardless of medium or scale – poem, art installation, public art project or building – Acconci’s work has always been about one thing: human experience. Today, freeing up how ­people interact with the environment around them – or at least making them more aware of their surroundings – remains his guiding objective.

“A lot of architects are obsessed with the notion that when you design a space, you’re necessarily designing people’s behaviour in that space,” he says. “In some ways, I wonder if architecture as we know it is necessarily a totalitarian activity. We try to do the opposite. We try to at least give people multiple choices. What we’d really love our projects to do is liberate people.”