Zaha Hadid’s Controversial Culture Hub in Seoul
In the vibrant heart of the South Korean capital, the London architect has created an awe-inspiring yet inward-gazing monument housing galleries and retail spaces - and once again her critics are out in full force. 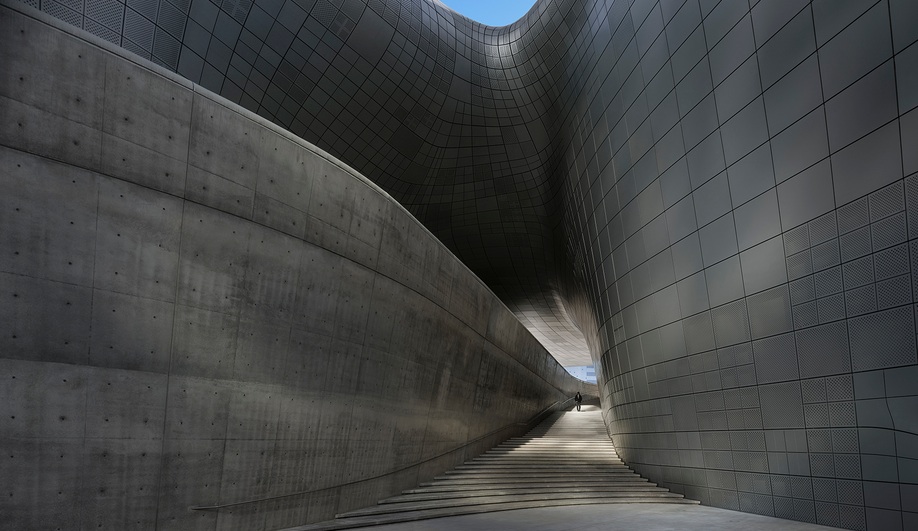 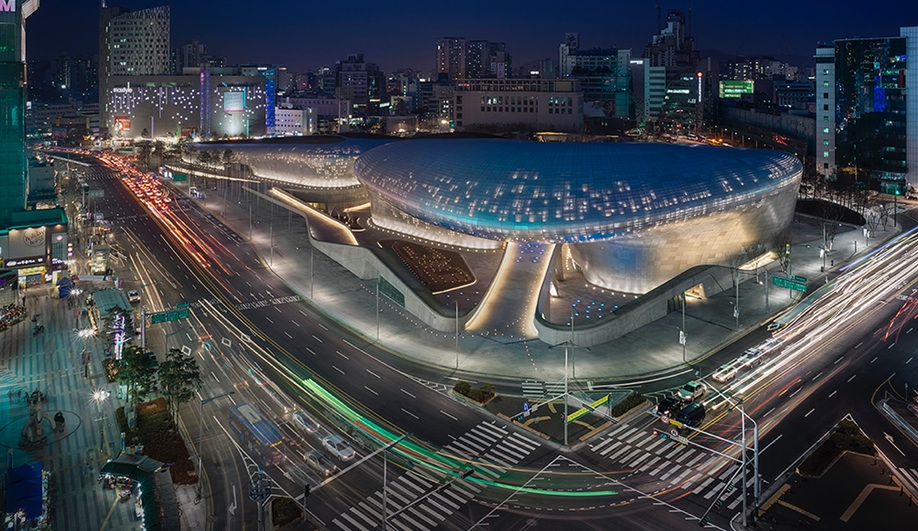 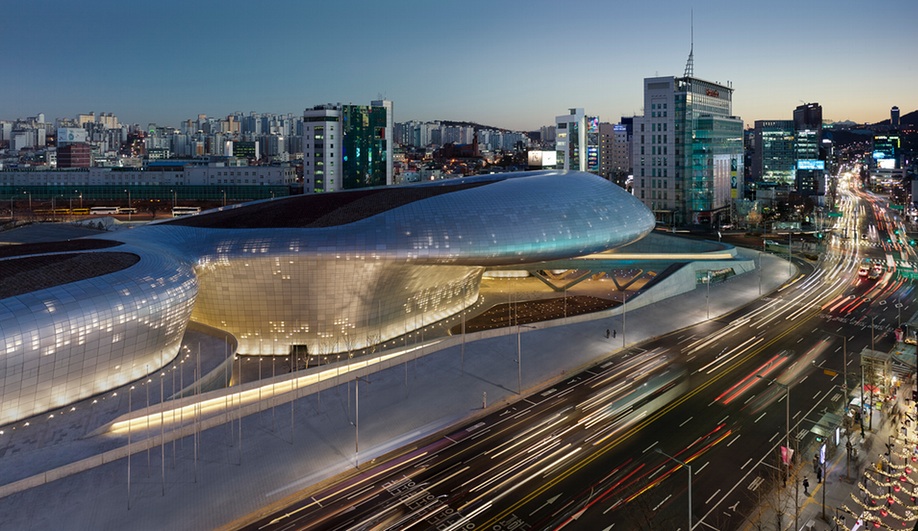 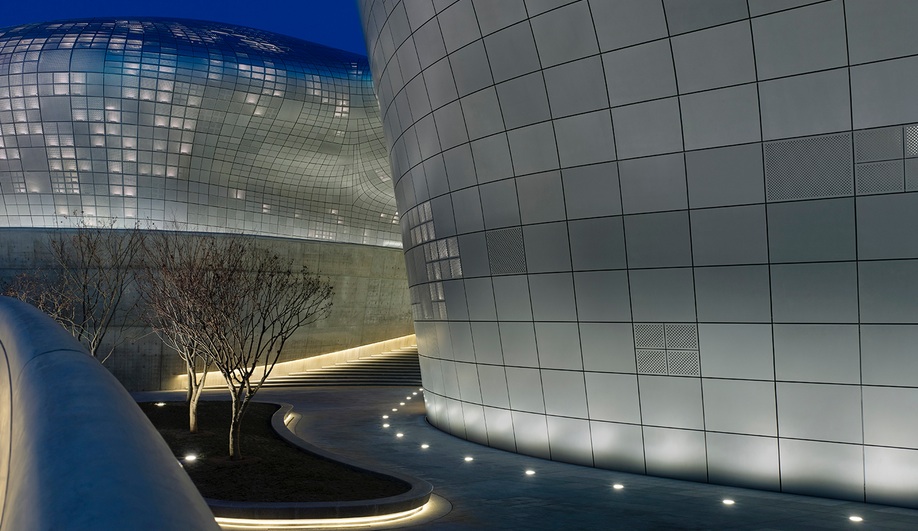 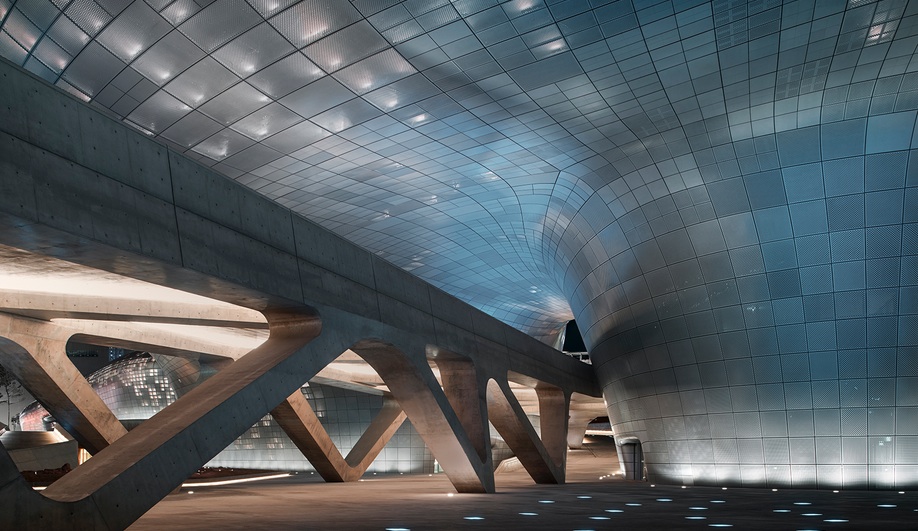 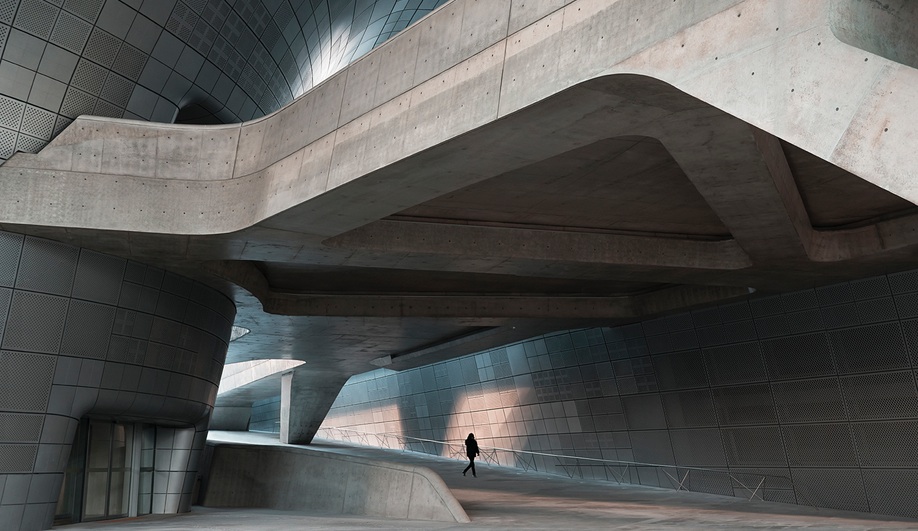 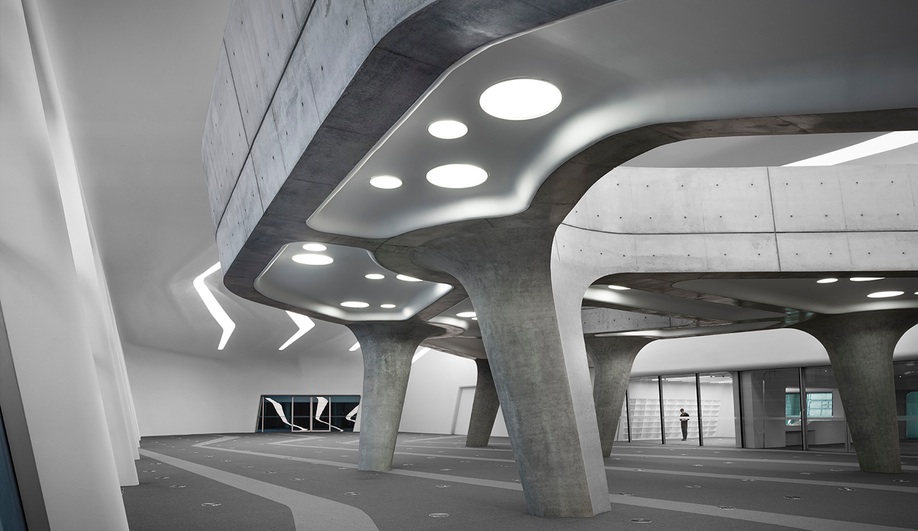 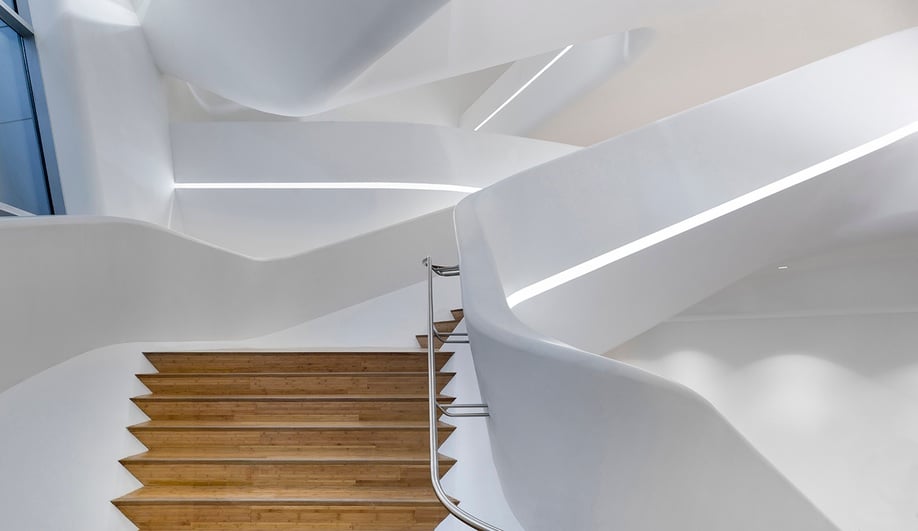 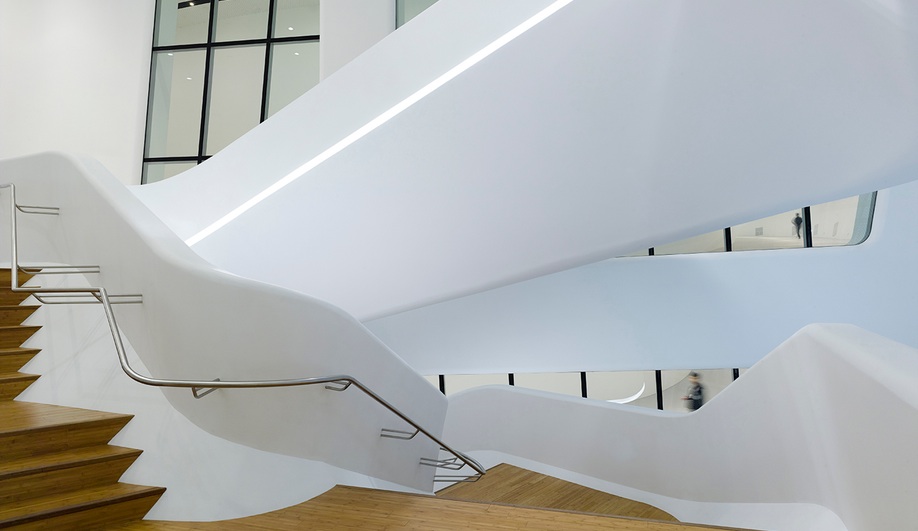 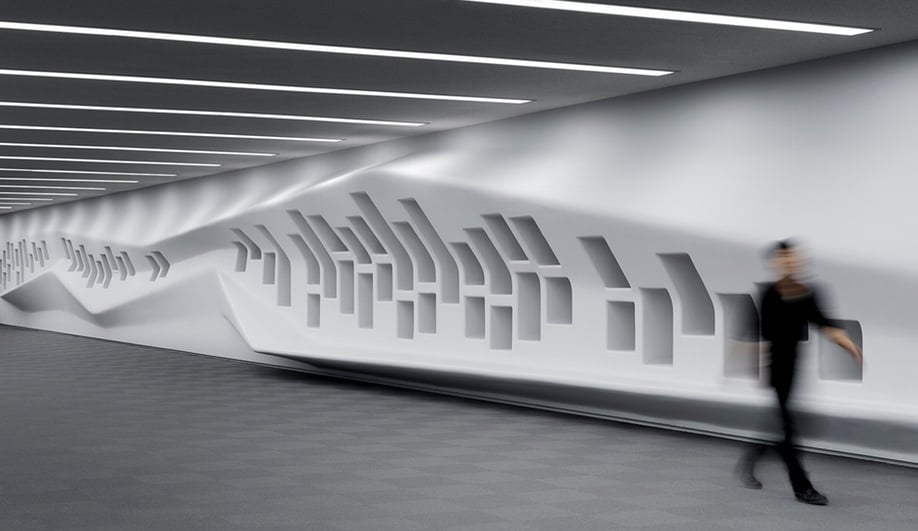 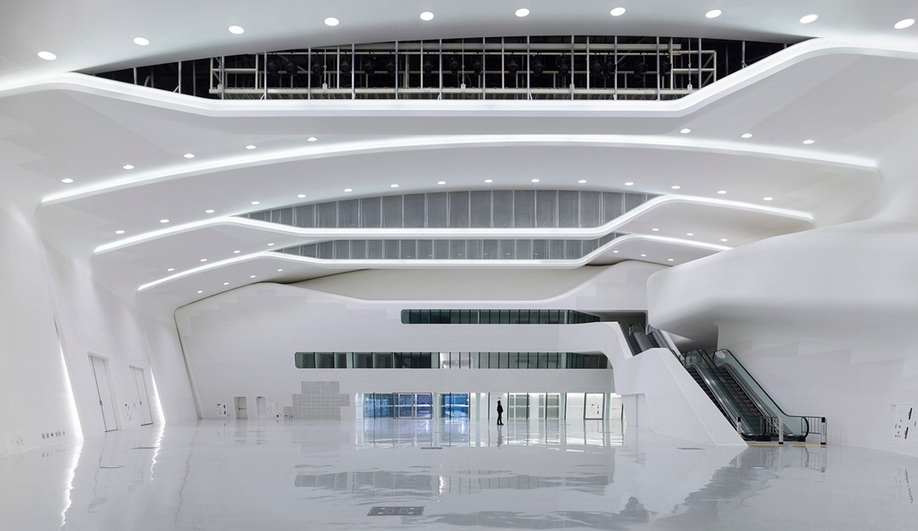 There’s no denying the technical and physical achievement represented by the Dongdaemun Design Centre. It’s the world’s largest asymmetric building, and Korea’s first public project to utilize BIM (building information modelling) software. It houses an interconnected series of spaces – including three exhibition halls, two convention halls, a design museum, a lab and children’s education centre, media centre, lounge and an even an outdoor park – that meet complex spacial, engineering and programmatic requirements. The ensemble is wrapped in 45,000 aluminum panels of different sizes and degrees of curvature that flow together to create a sweeping, organic profile, above which a gently sloping green roof spans the length of multiple soccer pitches.

However, the DDC also occupies the former site of a beloved baseball stadium, and stands in marked contrast with the chaotic neighbourhood around it: a district of narrow alleys lined with the flashing neon lights of an army of merchants. In a statement to Archinnovation, Hadid said the project’s aim is “to bring delight and inspiration to the people of Seoul by establishing a cultural hub in the centre of one of the busiest and most historic districts of the city.”

If the Seoul government’s goal was to open up a claustrophobic urban space and let it breathe, and to replace the cluttered streetscape with something more futuristic and minimal, then the DDC unquestionably succeeds. The sleek facade, essentially blank by day, comes alive at night as its backlit perforated panels are animated by pulsing lights, mimicking the neon-lit dynamism of the surroundings, if not the form.

But the DDC is being buffeted by the controversy inevitable for virtually all of Hadid’s built works. Some say it’s too iconically “Hadid.” Then there’s the perennial issue of cost; as the Wall Street Journal reports, some locals say the $450-million-plus price tag is too steep for what is essentially a former mayor’s vanity project.

Then there are the criticisms about the building itself, and especially its context. Speaking to the disconnect between the centre’s futuristic exterior and the bustling district next door, one Dezeen commenter said, “This kind of design works in the middle of a desert, not in a vibrant, notorious market place like Dongdaemun.” It’s a discontinuity that has led Daniel Tudor, author of Korea: The Impossible Country, to call the centre a mere status symbol, the architectural equivalent of an Hermès handbag.

The images released by the architect’s office reveal a building whose jellyfish-like profile is stunning from afar, but up close presents empty chasms beneath a blank face, almost as if the structure was meant to be appreciated from a distance rather than occupied, let alone integrated with the neighbouring streets. These photos reveal walkways and stairways in deep shadow – scenes that echo the kind of indifference to human presence associated with geological formations and Brutalist architecture. In a sense, the DDC (and Hadid’s oeuvre as a whole) embodies a new kind of Brutalism: the blocky repetition of pure functionalism is gone, replaced by biomimetic curves and unique, painstakingly designed components – but the stark metal and concrete, together with a sense of scale completely out of proportion with human activity, remains.

As the anonymous Angry Architect points out on Architizer, the exterior suffers from “the complete lack of connection between the human scale and the scale of the wider city. The building’s bloated front…has very little active frontage at street level, and towers over pedestrians like an enormous sculpture.”

One could argue that this was Hadid’s goal – to inspire visitors with a glimpse of the sublime, rather than to simply replace one retail-activated concourse with another. Naturally, the project has its boosters, too: online commenters, though split, seem to tilt in favour of the project, admiring the detail that has gone into the facade and the way the overall shape fits with its surroundings on a grander scale. It makes one wonder, though, why Hadid – more than many of the architects as accomplished as her – seems to constantly have to defend her work against critics, as others have also noted.

In the case of the DDC, the mixed response might reflect that like all buildings, this one faces tradeoffs between dozens of factors, including scale, budget, a relationship to other structures, and not least of all the requirements of the client.