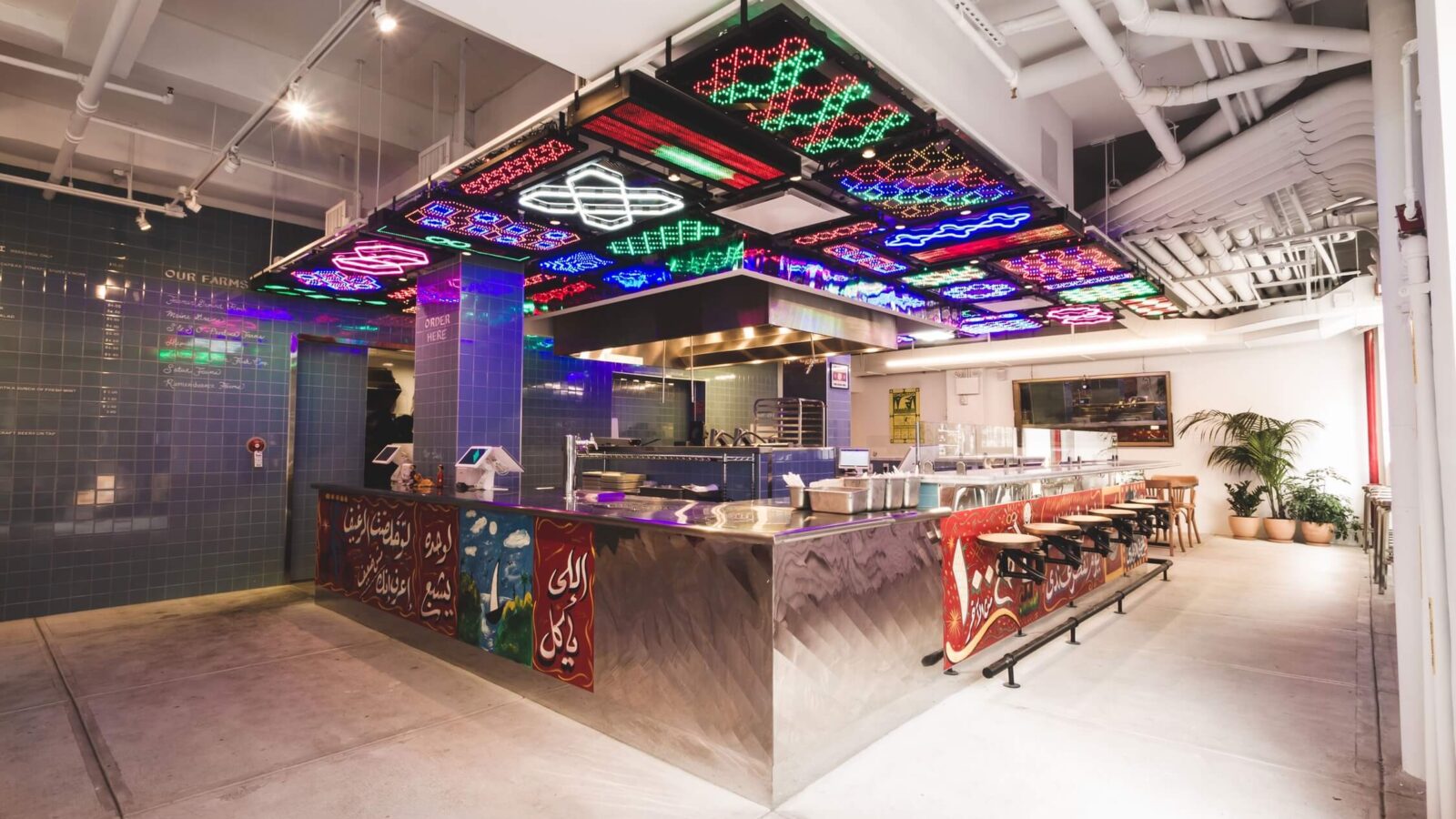 Designed by AE Superlab with &Walsh, the Nolita restaurant proudly walks the line between kitsch and contemporary.

When they were hired to design the first international outpost of Zooba, Ahmed El Husseiny of architecture firm AE Superlab and Jessica Walsh of graphics studio &Walsh went right back to the beginning. They traveled to Cairo, where the street food restaurant was founded in 2012, before expanding to six other Egyptian locations from its original home in the upscale neighbourhood of Zamalek.

In its home city, Zooba had cultivated a passionate following for its reimagined Egyptian fare – which includes taameya and bessara, fava bean-based falafel and hummus respectively, as well as koshari carb bowls and hawawshi burgers – and a recognizable visual identity. So its expansion into New York required a thoughtful translation: Chef Moustafa El Refaey and owner Chris Khalifa had to introduce a new culinary vocabulary to their New York patrons, and the design team had to reinterpret Zooba’s vibrant brand. And given that the first location outside Egypt was entering one of the most competitive restaurant scenes in the world, this combined effort had to make Zooba stand out from its neighbours.

That it does. The storefront is adorned with a number of callouts: a “huge, sloppily painted Arabic logo” (according to the official press release), a neon sign above the door that keeps the scrappy original logo’s diacritics but presents a neater, poppier branding, and the stencilled statement “Fresh Out of Cairo Since 2012.” Inside, this clash of aesthetics is amplified in a graphic language that features muted tile and mirrored metal surfaces – and brings together poster art, painted murals and a patchwork of neon patterns.

The most attention-grabbing feature of the restaurant is the central kitchen’s illuminated soffit. “Inspired by a walk through a busy popular market in Cairo, we designed the soffit to be the visual centrepiece reflecting the chaotic order of the city’s culture.” He explains that AE Superlab heavily relied on graphics by Jessica Walsh (who established her studio, &Walsh, after leaving Stefan Sagmeister’s agency). They based their colour pattern and geometric motifs on her branding, and designed and fabricated the soffit completely in-house.

A reference to both the vibrant neon lights of the Nile’s felucca boats and the bright lights of New York’s Chinatown, this tapestry of motifs is realized with three types of panels: LED, point and animated. “After researching other methods that proved either too costly, too time consuming or otherwise non satisfactory from a design standpoint, our team proceeded to custom design components and connectors in CAD and to 3D print them in-house using high-strength plastics to fabricate the installation,” El Husseiny explains. “This enabled us to realize our vision precisely and to fabricate the entire assembly in a fraction of the time and cost that it would have using conventional outsourced methods.”

While the design team sought to honour Zooba’s spirit – they clad the central counter in hand-painted “foul cart” panels and shipped Zooba’s iconic vintage blue doors from Cairo, restoring and remounting them in the New York restaurant – it also needed to get that translation right. “Our biggest design challenge,” says El Husseiny, “was finding the right tone for the space: locating that line that separates playful kitsch from gaudiness, regional iconography from honesty. And making sure that we either stay on the right side of that line or perhaps cross it knowingly, with a wink and a nod.”

Designed by AE Superlab with &Walsh, the Nolita restaurant proudly walks the line between kitsch and contemporary.