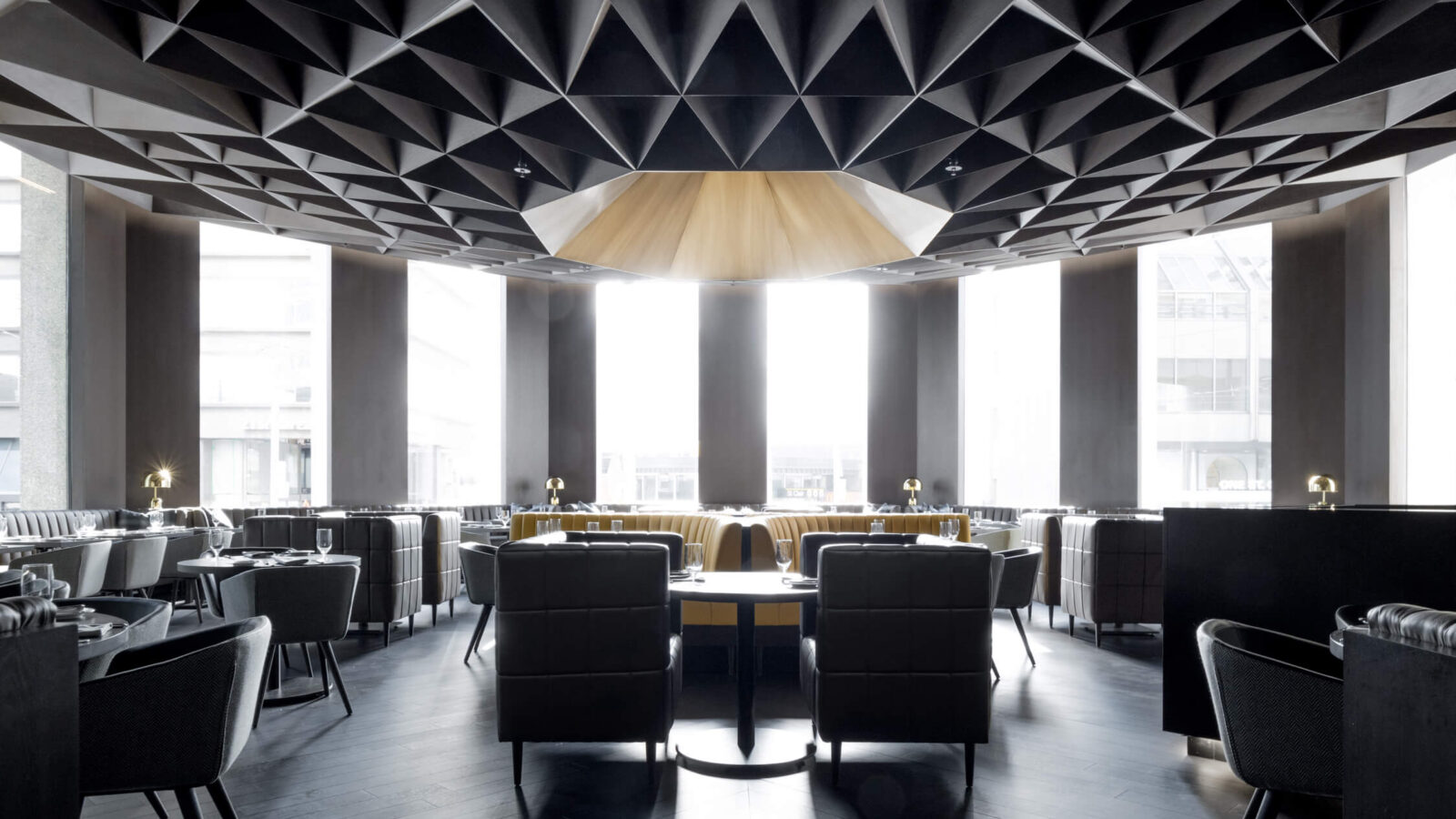 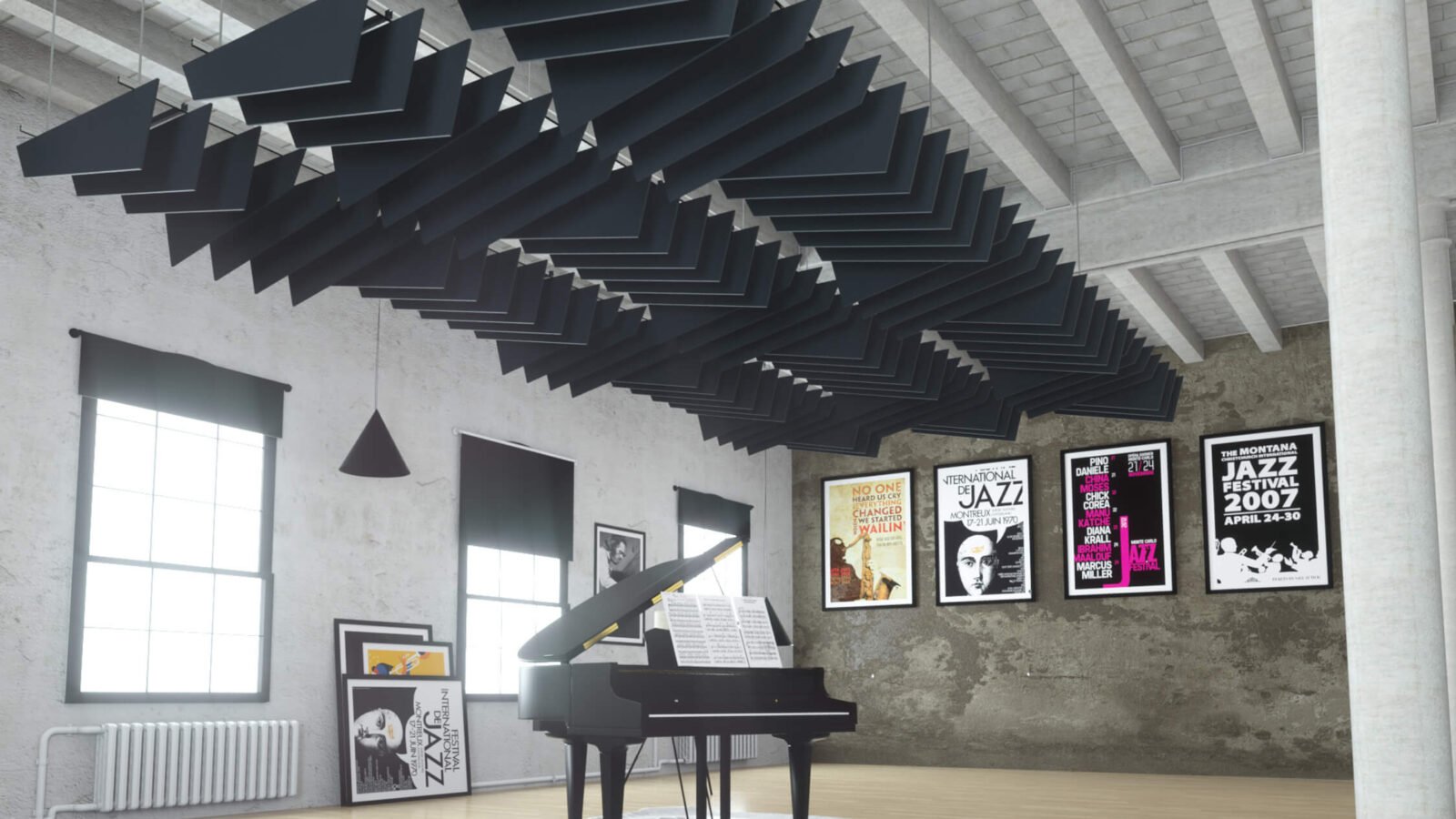 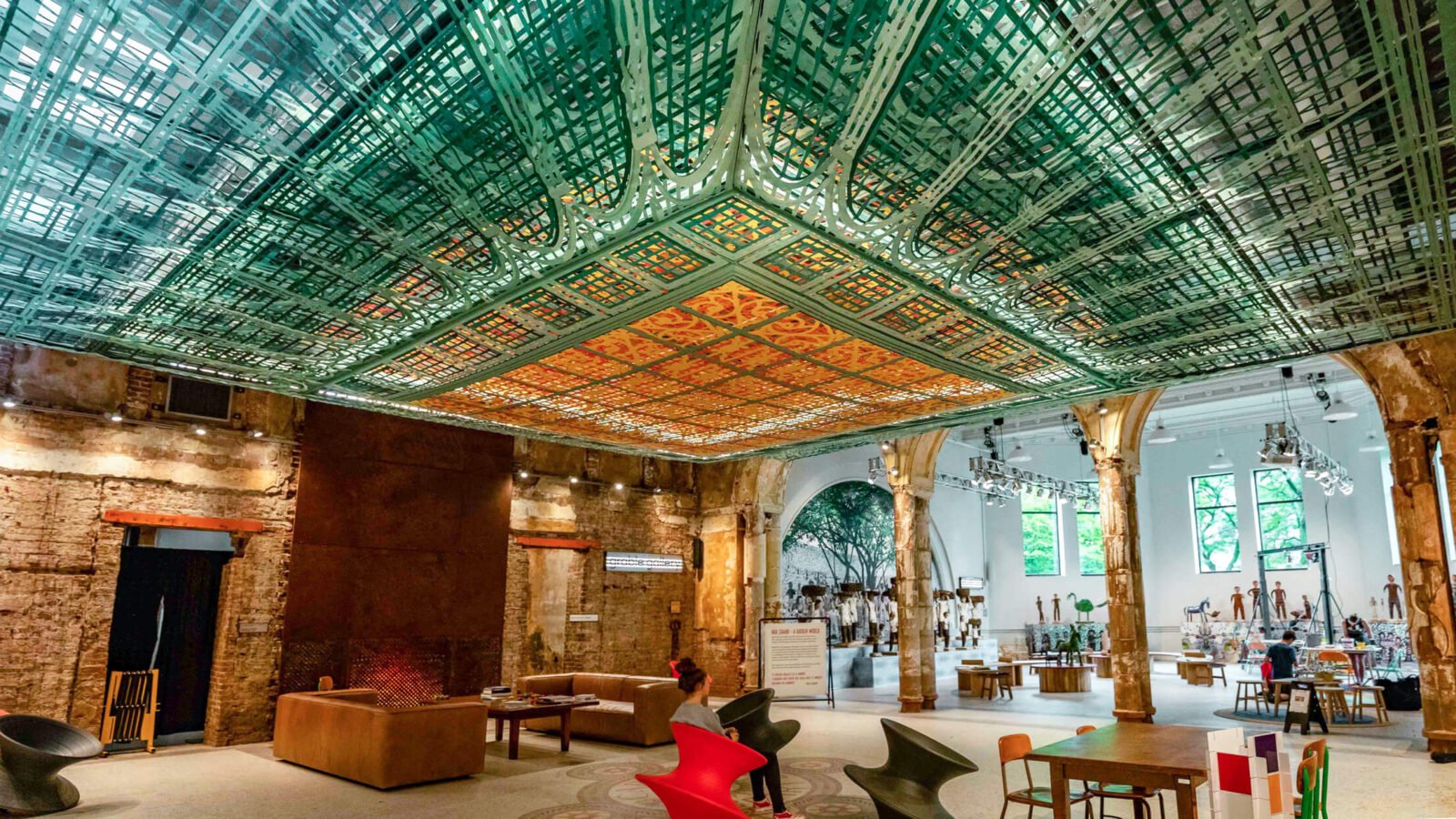 Both provocative and contemporary, Freelandbuck's take on trompe-l'œil mesmerizes.

The Wonderful Trompe-l'œil Ceiling at the Children's Museum of Pittsburgh

Dark wood. Fine leather. Shiny hits of bling. Chase Hospitality Group’s wish list for their latest Toronto venture, Arthur’s Restaurant, initially included all of the staple ingredients for a traditional steakhouse. But rather than just emulating an old country club, the group’s design team, gh3*, sought to combine this time-honoured palette with the more modern, geometric character of the restaurant’s setting, an octagonal podium at the base of a 1970s office tower.

The local architecture firm’s skilful blend of sharp angles and suave sophistication is epitomized by the project’s showpiece: an eight-sided, nearly 12.5-metre-wide wood and bronze ceiling sculpture. Impressively, this gemlike construct also integrates sprinklers, speakers and spotlights – all the while looking as seamless as a cut-crystal tumbler.

Credit for the design’s clean millwork goes to Unique Store Fixtures, which created 265 individual pieces using Tabu’s pre-dyed Italian oak veneer and assembled them into 24 sections (after first creating a full-scale mock-up with particle board). “Software took us so far,” explains Marco Corrente, the fabrication studio’s vice president. “But it’s difficult to model compound angles, so it was necessary to stage it so we could fine-tune it.”

Designed by gh3* and constructed by Unique Store Fixtures, the eight- sided, pre-dyed oak veneer ceiling is made up of 265 individual pieces seamlessly milled together.

To keep screws out of sight, the components were internally mitred together in the shop. These were then moved on site and raised into place one at a time to form the eight triangular clusters of three subsections, outfitted with the necessary pipes and wires and attached to one another by hidden custom brackets. The entire four-tonne creation is suspended by an engineered Unistrut system of threaded rods that attach to these brackets, allowing for a perimeter reveal accentuated by moody cove lighting while still preventing the structure from swaying.

At its core, the ceiling opens up to a large void encased within a vaulted bronze volume hung from a chandelier lift to allow easy access to the mechanical units above. By sloping down toward this central element, with its tessellated pattern growing increasingly dense in its inner rings, the structure introduces a sense of intimacy in the soaring dining room. “People always say that it’s the edges of a restaurant that feel cozy,” says Shawna Seligman, an intern architect at gh3*. “This brings that feeling to the centre banquettes, which usually feel too exposed.”

And while these tufted banquettes’ mustard yellow leather may catch the eye, furniture is kept to the same low height to keep most of the attention on the one-of-a-kind wonder above, a rare sight indeed.

Though preconfigured, these easy-to-install, approximately 152-by- 182-centimetre hexagonal modules express a dynamic, site-specific character. A recent addition to the SoftGrid series, Flux can be specified in 30 colours and finishes, including the wood-grain texture shown. arktura.com

Part of the Ecoustic baffle collection, Octave can be mounted on existing rail and suspension systems in horizontal orientations, as well as custom- installed to walls, suspended from cables or introduced as free- standing partitions. Two sizes of the recyclable PET fins are available; each is sold in 11 bold or neutral colours. unikavaev.com

A magnetic system that snaps to existing tee grids, Switchblade features three designs – Classic, Organic and Geometric – in three depths that can be mixed and matched to create angular, undulating or staggered installations. Made from 99 per cent recycled PET felt, the line comes in 17 colourways. turf.design

Over View, as its name implies, is a view overhead – and one that is transformative. The permanent ceiling installation – a massive 3D drawing – was created for the Children’s Museum of Pittsburgh’s new Museum Lab, which spills into the former Carnegie Free Library of Allegheny. “It’s this really spectacular building, but it had been renovated pretty brutally at a few points over the last century,” says Brennan Buck, a partner at FreelandBuck, the firm that masterminded the design. “We were interested in evoking the history of the building, its gravitas and beauty.” To that end, the tex- tile structure belies the room’s actual height to reveal an evocation of its former grandeur.

From the centre point beneath the canopy, the viewer sees it expand upward, mimicking the original ornate ceiling. “My hope is that people will walk around and try to find the point from which the drawing is projected,” says Buck. “From that one point, you get a good view of the concave historic leaded-glass ceiling and, as you move around, you can clearly see that it is a convex object hanging down toward you.” In effect, the installation allows the viewer to drift between concave and convex perspectives.

FreelandBuck, which has offices in Los Angeles and New York City, worked with a global manufacturer, Fabric Images of Elgin, Illinois, to develop the final product: three layers of non-woven plastic insusceptible to unravelling. The layers were printed and then cut and rolled for transport; a modular nine-by-12-metre aluminum frame supports the entire structure. In lieu of up-lighting, which wasn’t feasible in a space topped with a partial glass floor and filled with daylight, fixtures are fitted between the fabric layers to highlight the depth of the illusion.

But Over View isn’t your typical trompe l’oeil. It’s both provocative and contemporary. “We’ve been fascinated by the history of trompe l’oeil in Italy,” says Buck. “At one time, those illusions were so powerful, but they’re really not anymore. We encounter more powerful illusions all the time now, whether it’s images or videos or virtual reality. What’s interesting is that they are sort of fragile; they change and distort as you move around the space.”

The project is a study in medium and material: a large-scale drawing brought to life through fabric, blurring the lines between works on paper and bricks and mortar. In this case, says Buck, they are quite literally building through drawing. “Hopefully it works as a drawing that describes another space or object, but also as a material, physical thing. I think there is a real uncertainty to it that prompts people to take a second look.”