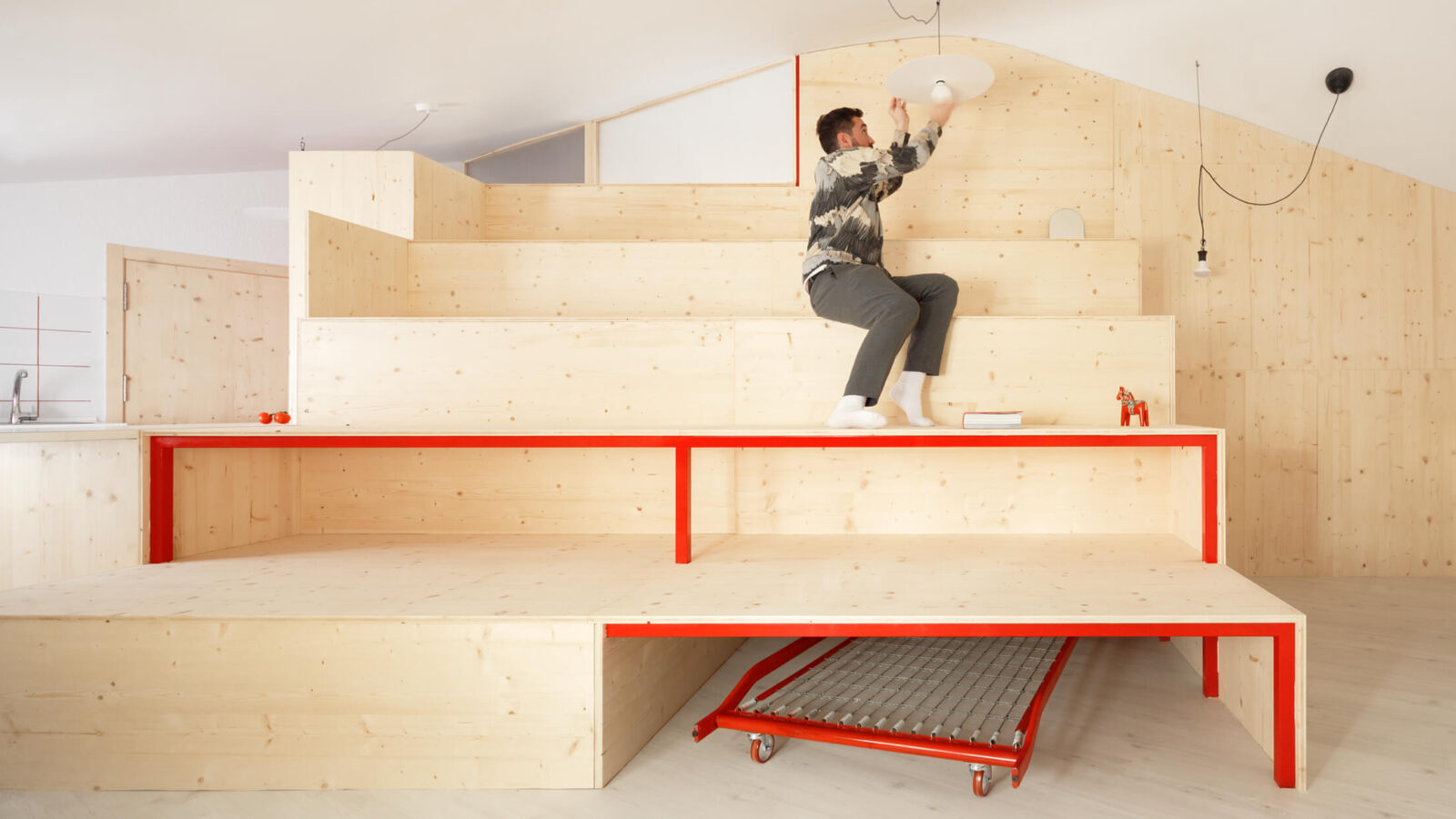 A Compact Spanish Apartment “Steps Up” the Spatial Efficiency

In the village of Almenar de Soria, LiquenLAV designs an apartment where the stairs double as an ingenious storage solution.

Located in the north of Spain, the province of Soria is known for its quaint medieval capital (also called Soria) and, unfortunately, its rural joblessness and gradually emptying villages. Among the latter is Almenar de Soria, which has only about 200 residents and is the hometown of Valentín Sanz.

The young architect studied in Madrid and finished school during the Great Recession, when many architectural practices had to close their doors and numerous practitioners were left unemployed. In 2009, Sanz founded his own studio, LiquenLAV; like many in his cohort, he has pursued a varied career that includes work in furniture and product creation, in graphic design and in urbanism.

Recently, though, he returned to the village of his birth to work on a potentially game-changing interiors project: a single small apartment designed to address the region’s lack of rental spaces. Although there are plenty of empty houses in the area, they are typically either for sale only or in a derelict state. The project has been financed partly by the regional government and partly by Almenar de Soria’s city council, which owns the property. 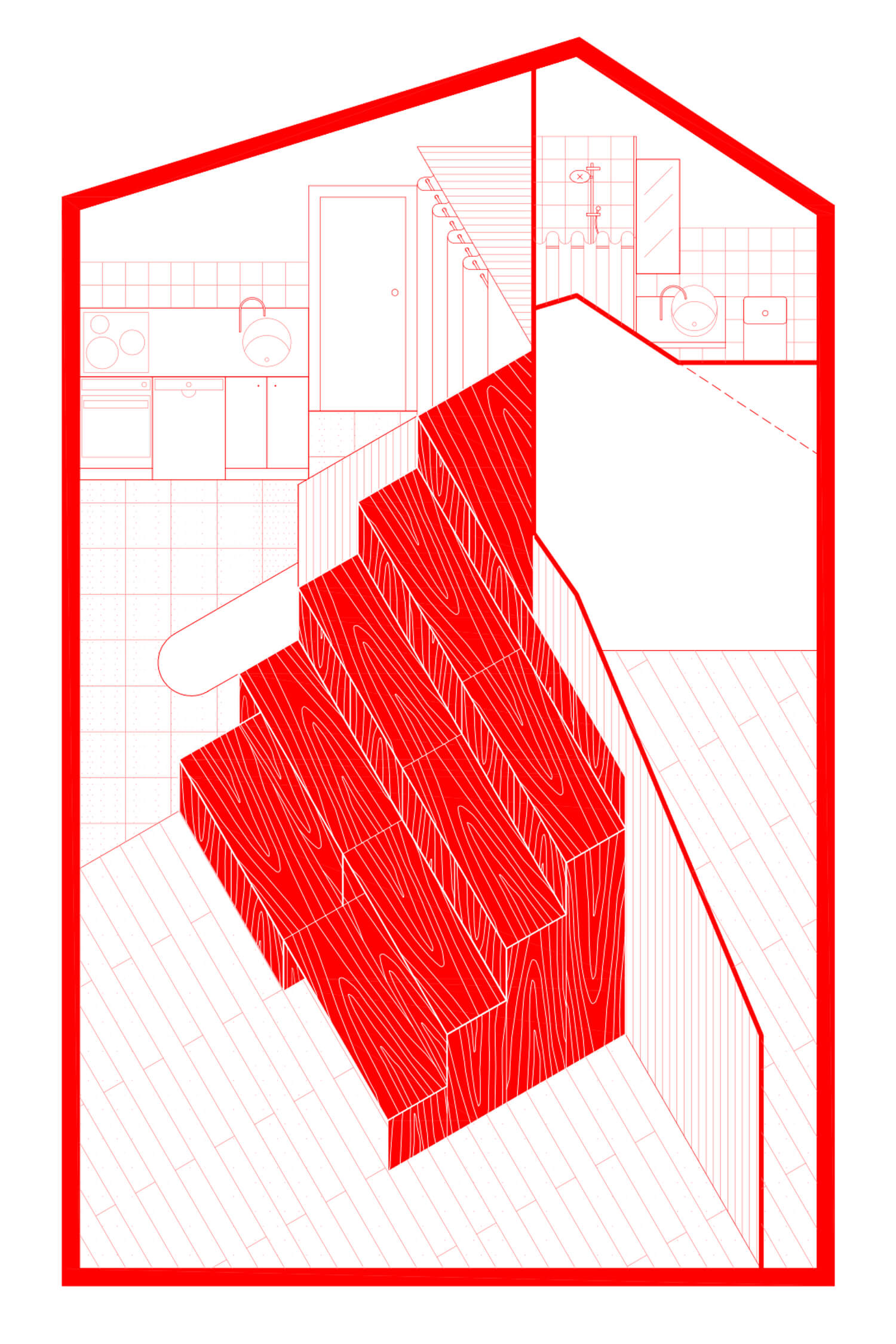 Originally a Red Cross building constructed in the 1980s, the structure had a public ground floor where emergency response was staged and an ambulance was kept, as well as a private top floor where workers could have a rest or cook lunch. It is this top level, accessed through an independent entrance, that LiquenLAV has adapted into its unique version of a small and affordable rental apartment.

The space – called Ruralattic – is 47 square metres in size, with a sloping ceiling that rises generously at the centre of the apartment. While a kitchen and tiled bathroom line one side of the space, Sanz’s defining intervention is a stepped solid-wood structure that rises from the middle of the apartment, delineating the living area from a small bedroom in the process. 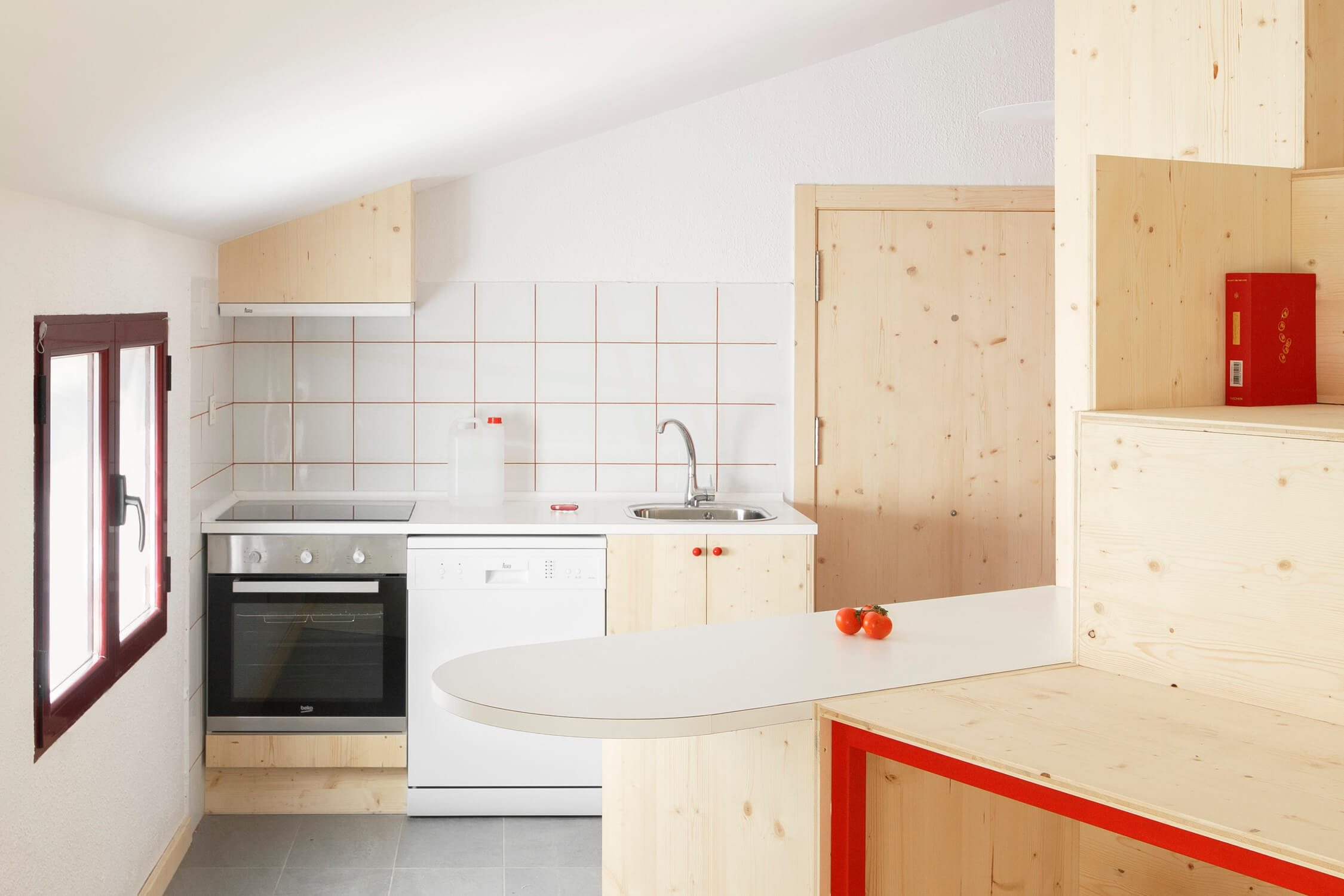 The kitchen is located at the entrance to the apartment, which is housed in a former Red Cross building. 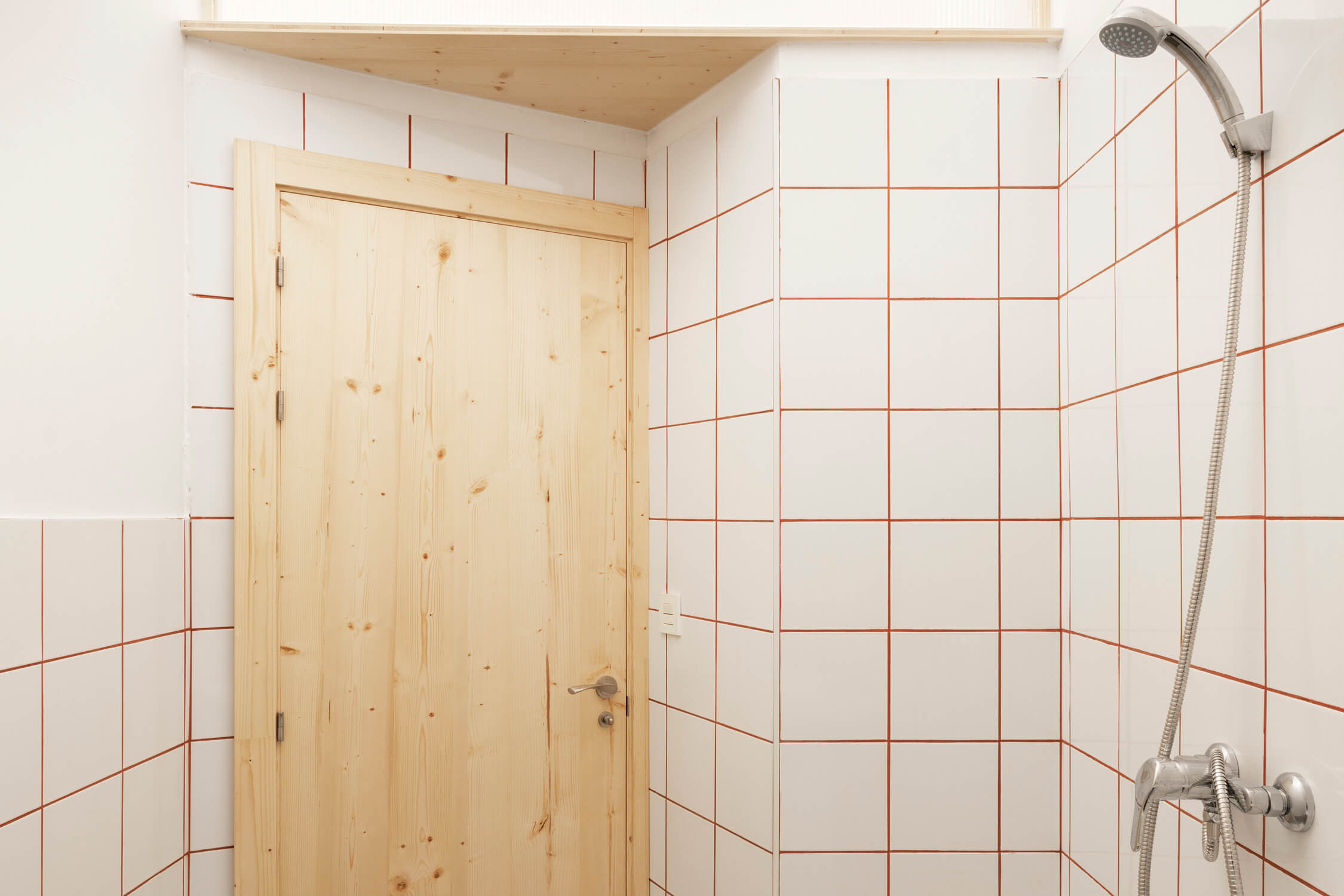 Just off the kitchen lies a bathroom tiled in white, with a touch of colour added in the grout. 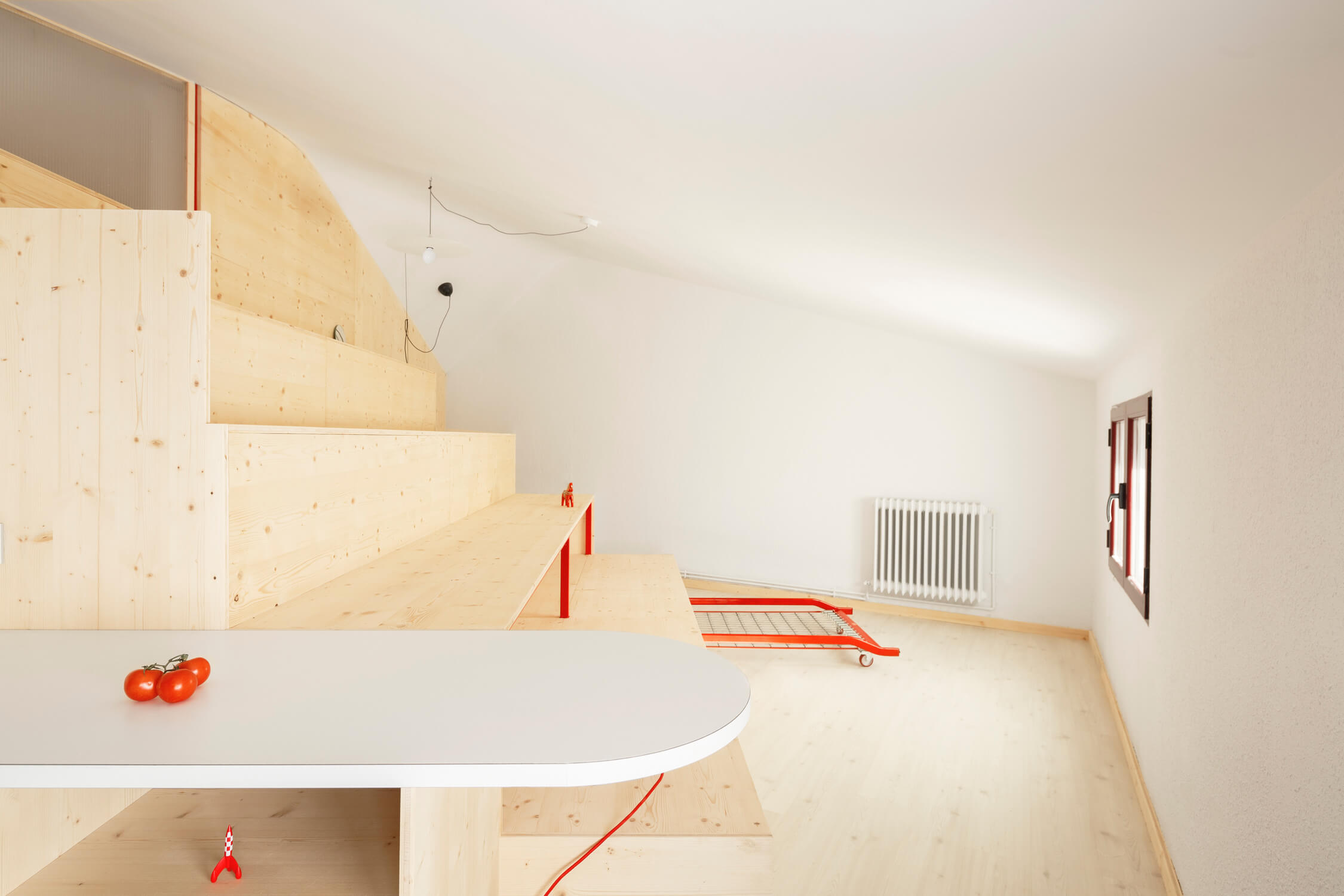 Precluding the need for furniture, the gradually narrowing steps on the living-room side can serve – depending on the needs and preferences of the tenants –as seating, as tabletops or (with the addition of a mattress pad or two) as extra beds; there is even a discreet niche for storing a rollaway bed.

On the bedroom side, a primary bed slides neatly into its allotted spot, while the inverse steps here function as shelving, open closets and other storage spaces. 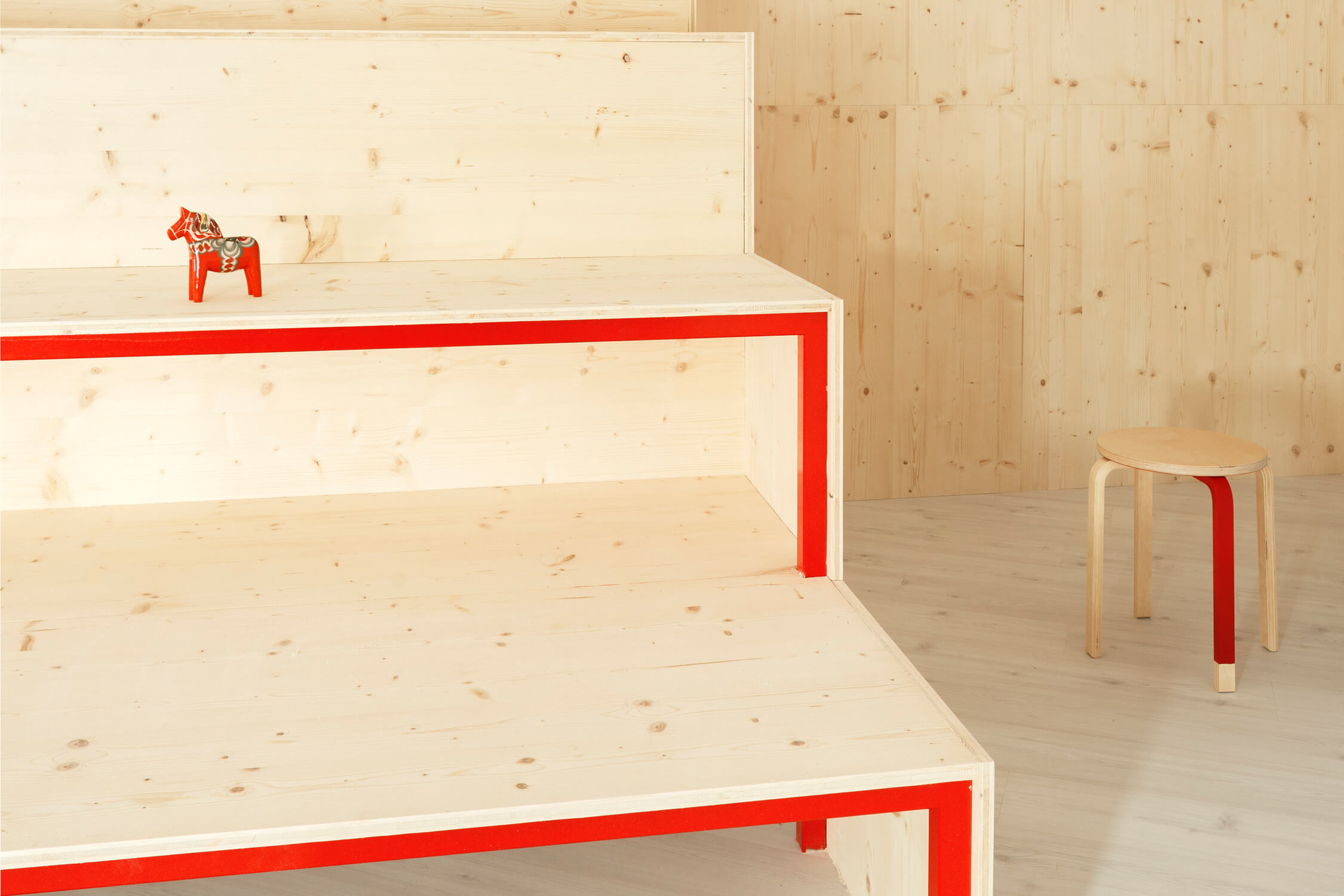 Both sides of the divider are trimmed in red, which pops against the wood and highlights functional uses.

Picking up on the exterior of the building, which is red brick, Sanz trimmed the structure in the same bright hue, which not only pops against the knotty surface of the wood, but outlines the profiles of the various functional elements as well.

The colour also distinguishes a portable light fixture – called Woodroll – designed by Sanz not long after he graduated. 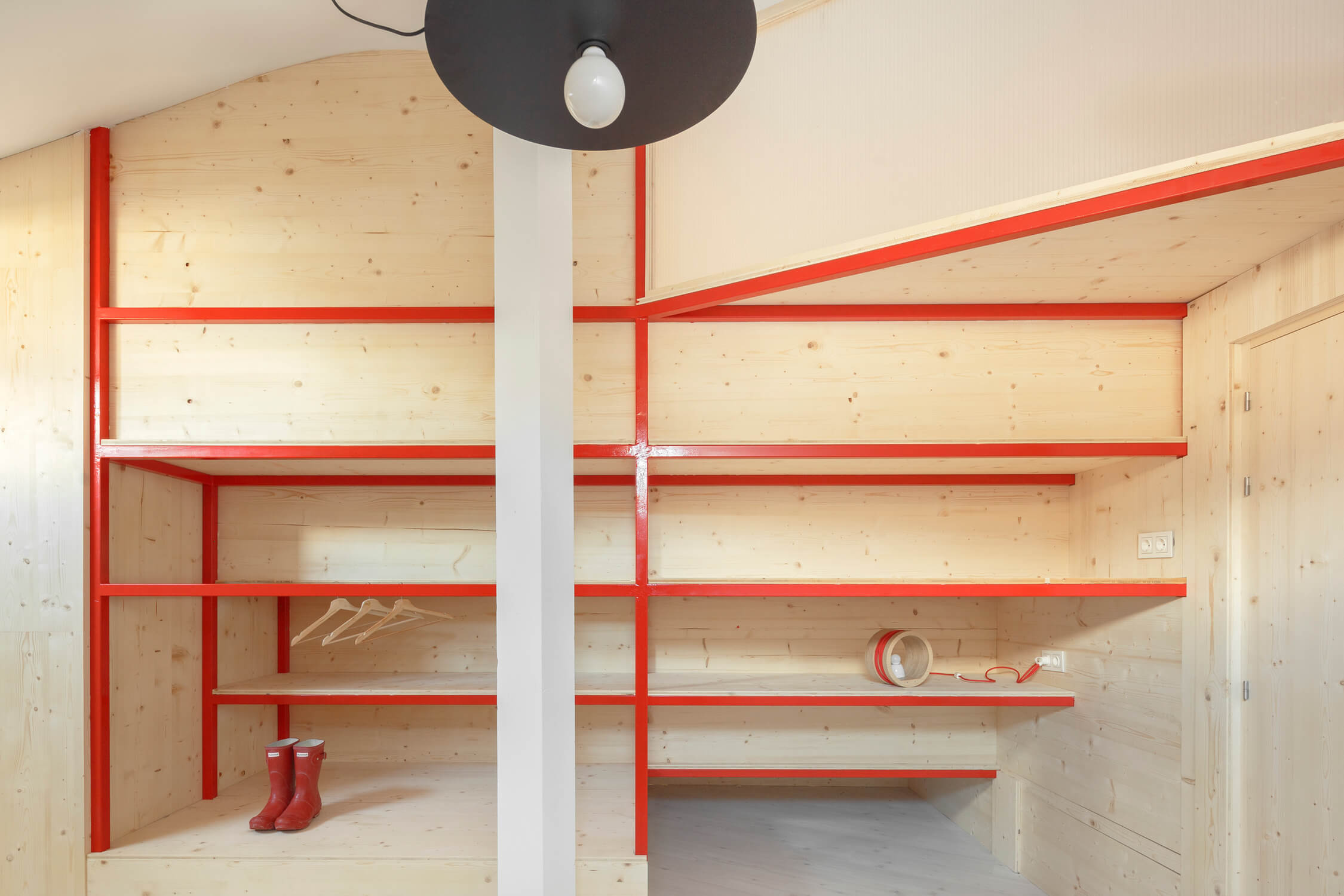 On the bedroom side, the back of the stepped unit functions as an open closet. The architect’s Woodroll lamp sits on a shelf at right.

Featuring a long red cable that coils around a circular wooden lamp, Woodroll is a small testament to Sanz’s long-time interest in creative functionality – a goal that his unique attic interior successfully meets on a larger and more complex scale. liquenlav.com

In the village of Almenar de Soria, LiquenLAV designs an apartment where the stairs double as an ingenious storage solution.