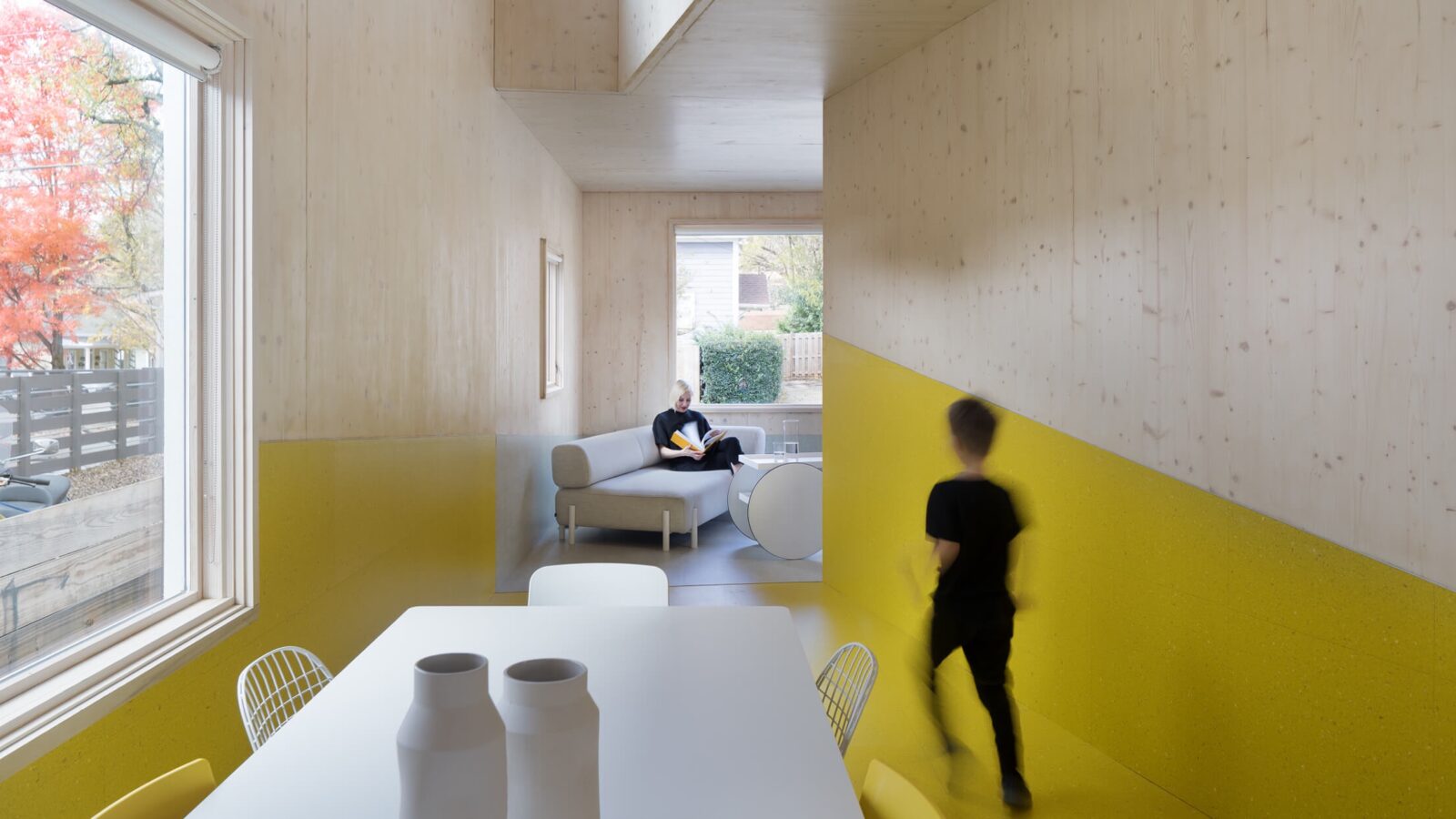 The rooms under the towering ceilings of architect Jennifer Bonner’s Atlanta home comprise a veritable museum of creative finishes.

Atlanta, Georgia is quickly becoming a cultural capital of the 21st century. And its brand is surrealism. The half-hour comedy Atlanta is easily the most experimental show on mainstream TV, while the city’s chief musical export – trap, a hip hop genre that combines heavy beats, vocal distortion, stoner humour and a kind of macho high camp – is both stranger and more dominant than anything else on the charts. The region has a large, diverse population (nearly six million in the metropolitan area), yet it’s far enough from New York City and L.A. that it’s free to do its own thing.

The architecture is distinctive, too. The city’s skyline – a mass of cylinders, spires, flying saucers and elevated walkways – forms the backdrop to more than a few science-fiction films. John Portman, the city’s most acclaimed architect, is best known for his futuristic hotel lobbies, in which capsule-like elevators ascend through soaring, ribbed atriums. In Atlanta, designers do things they can’t – or wouldn’t dare – do anywhere else. 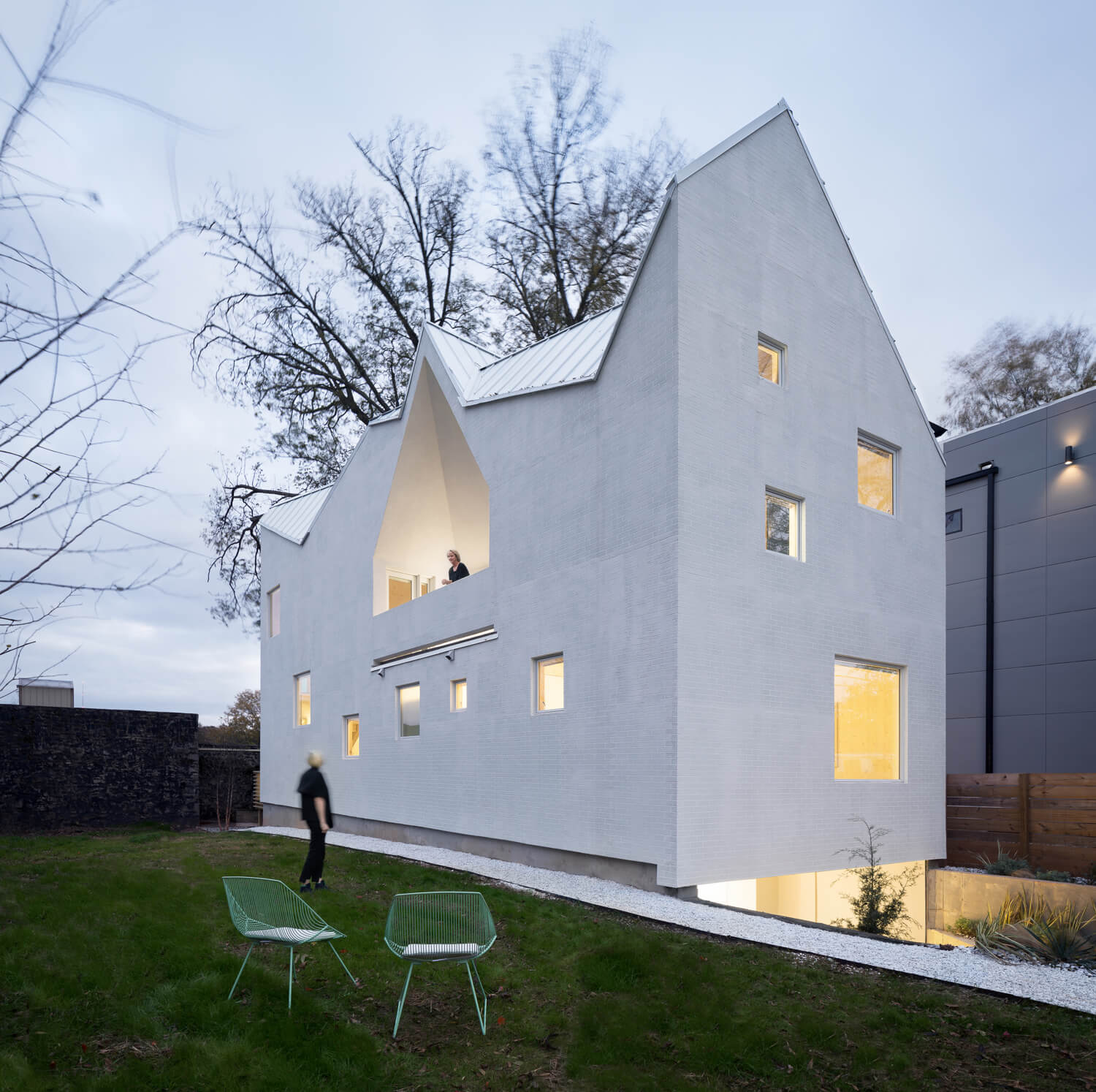 In the house that Jennifer Bonner designed for herself and her family, each room is distinguished by different materials on the floors and wainscotting, the various blocks of colour butting up against each other as in a Mondrian painting.

Jennifer Bonner, a professor at the Harvard Graduate School of Design and principal of the Boston firm MALL, recently completed a home in Atlanta, called Haus Gables, which she shares with her husband and daughter. Bonner has a strong connection to the city. Prior to taking up her position at Harvard, she worked at the Georgia Institute of Technology, where she and her students wrote a guide to the eclectic regional design scene. She wanted her home to reflect these influences: The house is a product of the American South – not the romanticized Old South, with its wraparound porches and ginger- bread trim, but rather the contemporary South, a place where swashbuckling experimentalism collides with ersatz Americana.

The house is a product of the contemporary South, a place where swashbuckling experimentalism collides with ersatz Americana 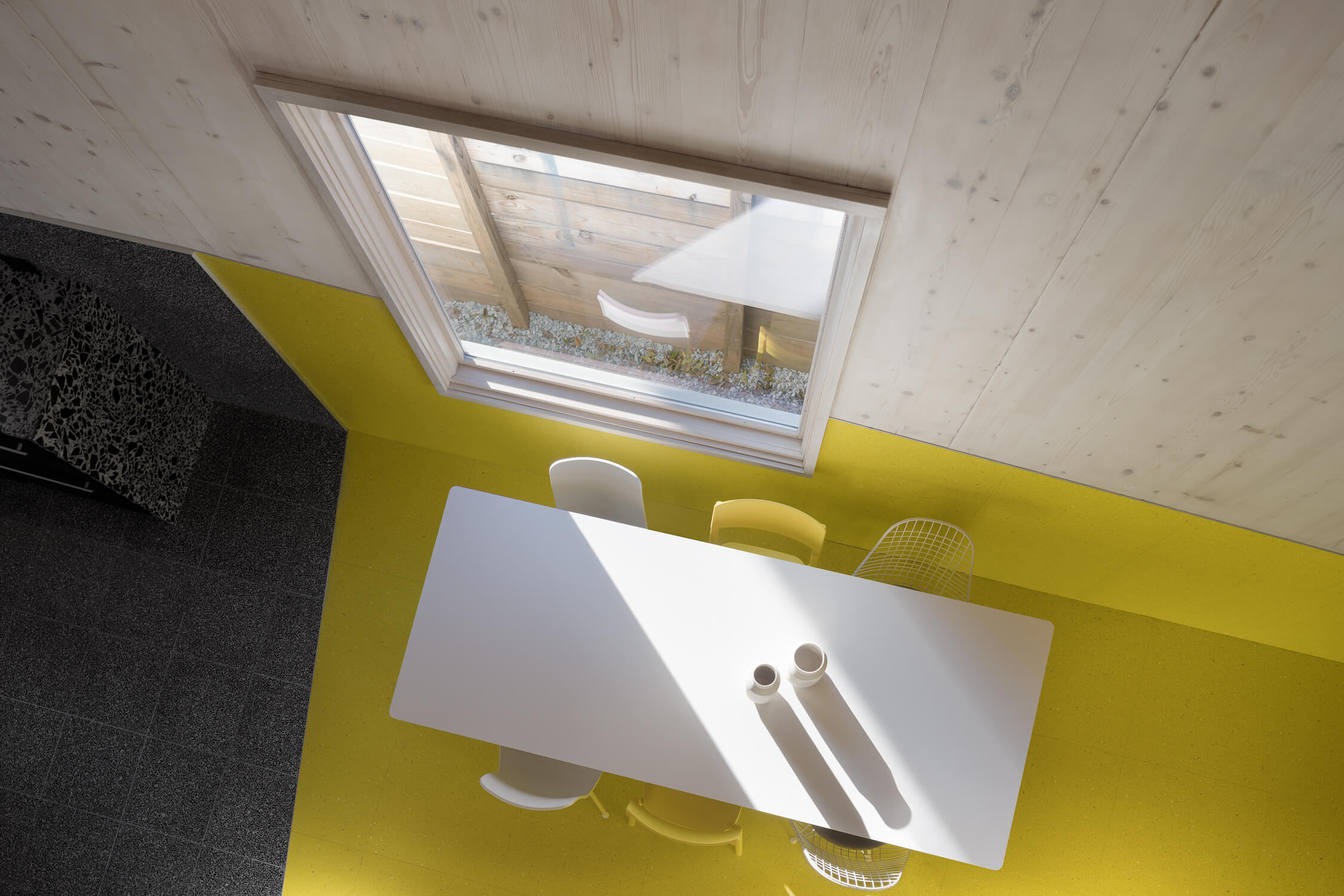 The inherent strength of cross-laminated timber… 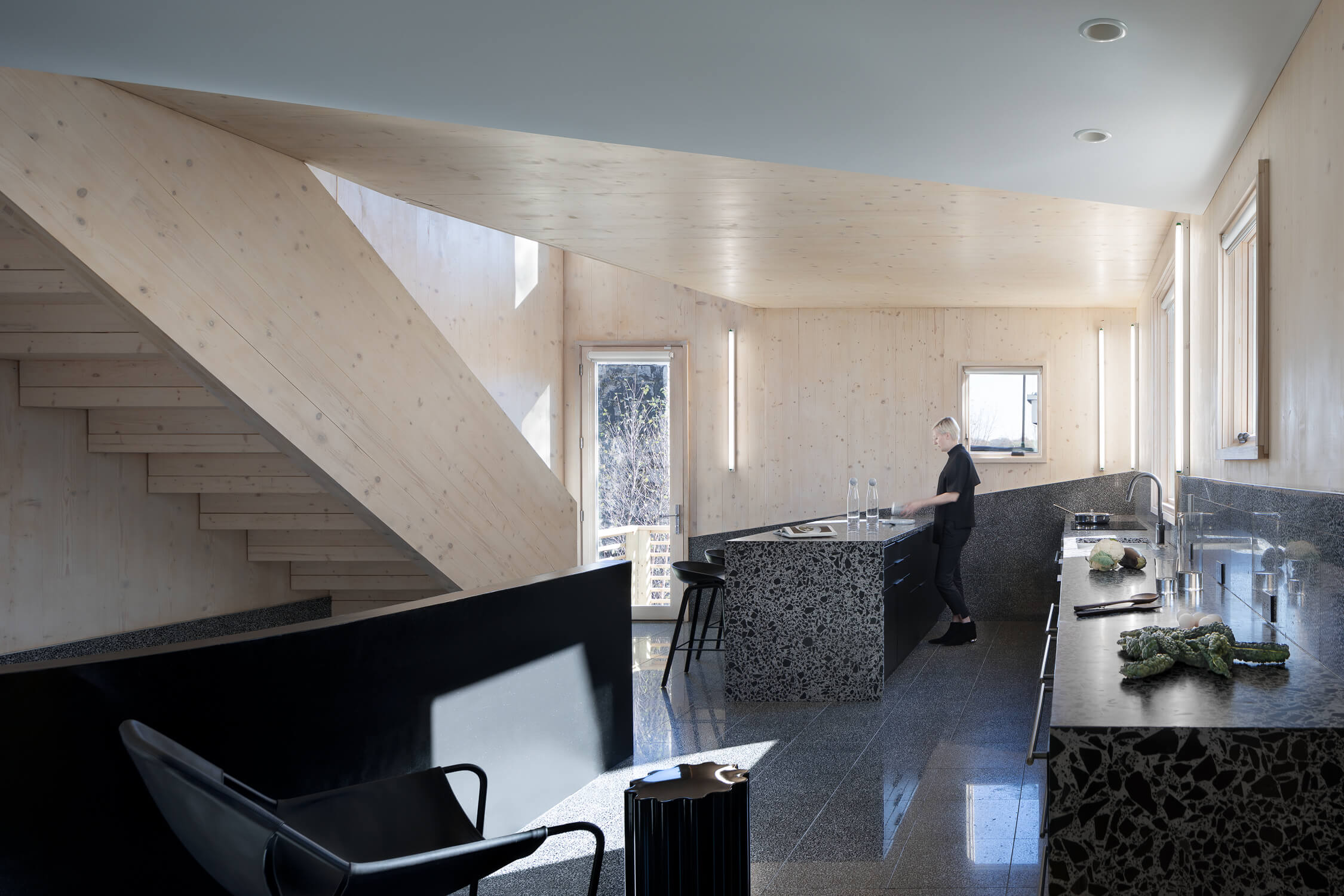 …allowed Bonner to create airy spaces with high ceilings uninterrupted by cross beams or other supports.

When she first visited Atlanta, Bonner noticed that the homes in the city’s more affluent neighbourhoods had “elaborate, convoluted roofs.” These hydra-like structures, with their many gables and dormers, evolved gradually, through multiple renovations – a garage extension here, an extra bedroom there. The design was slapdash, but the resulting forms were radical. She produced models of these rooftop topographies and tweaked them, making the slopes steeper and the ridges sharper. She then selected the version she liked best to be the template for her house.

By this point, she had purchased a lot in the city’s Old Fourth Ward. The property was a tight 7.32 metres wide, but it was adjacent to the BeltLine – a former railway corridor with cycle paths and hiking trails – in a district where builders aren’t required to appease the local heritage board.

“There’s no historic overlay in the Fourth Ward,” says Bonner, “no neighbourhood police saying what design needs to look like.” 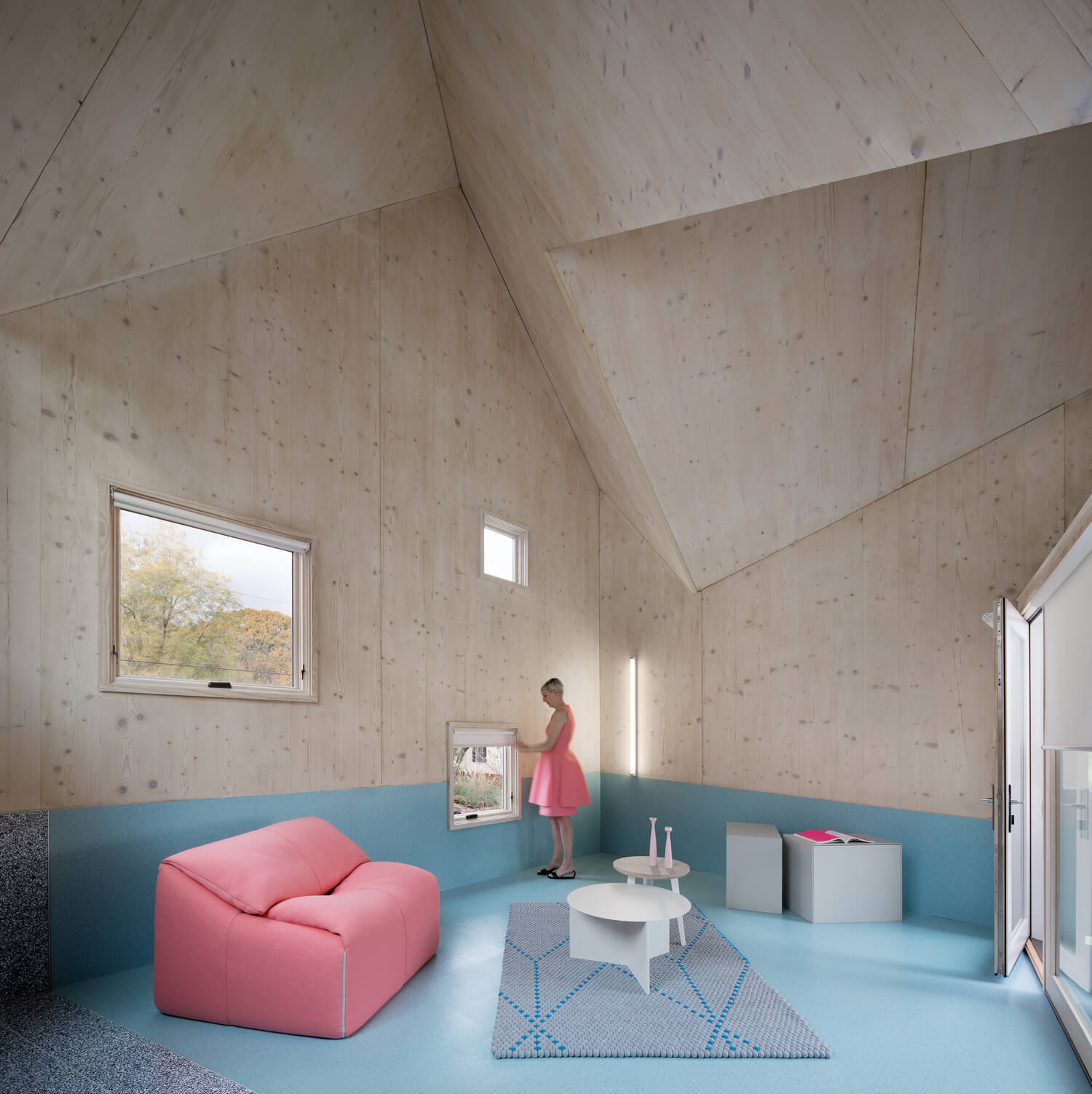 To furnish Haus Gables, Bonner chose many pieces by female designers, including the pink Plumy chair designed by Annie Hiéronimus for Ligne Roset.

When you build skinny, she argues, you must also build tall, to ensure that your interiors feel spacious. She wanted her roof to be com- pletely exposed on the inside, free of beams, trusses and ties. Without such framework, how- ever, an ordinary plank-built gable will fall apart, so she chose instead to work with cross- laminated timber (CLT), more commonly used in Canada and Europe.

An engineered wood, CLT enables contractors to use industrial techniques in domestic builds. Houses are typically stick-built, with sheets of plywood suspended between structural beams and studs. But CLT, like concrete or cinder block, is so sturdy that it doesn’t require framing. You can construct a home from the ground up, as you would a factory or a big-box store.

Bonner left most of her interior walls unclad. She could have exposed them fully, but she didn’t want a woodsy, Scandinavian feel 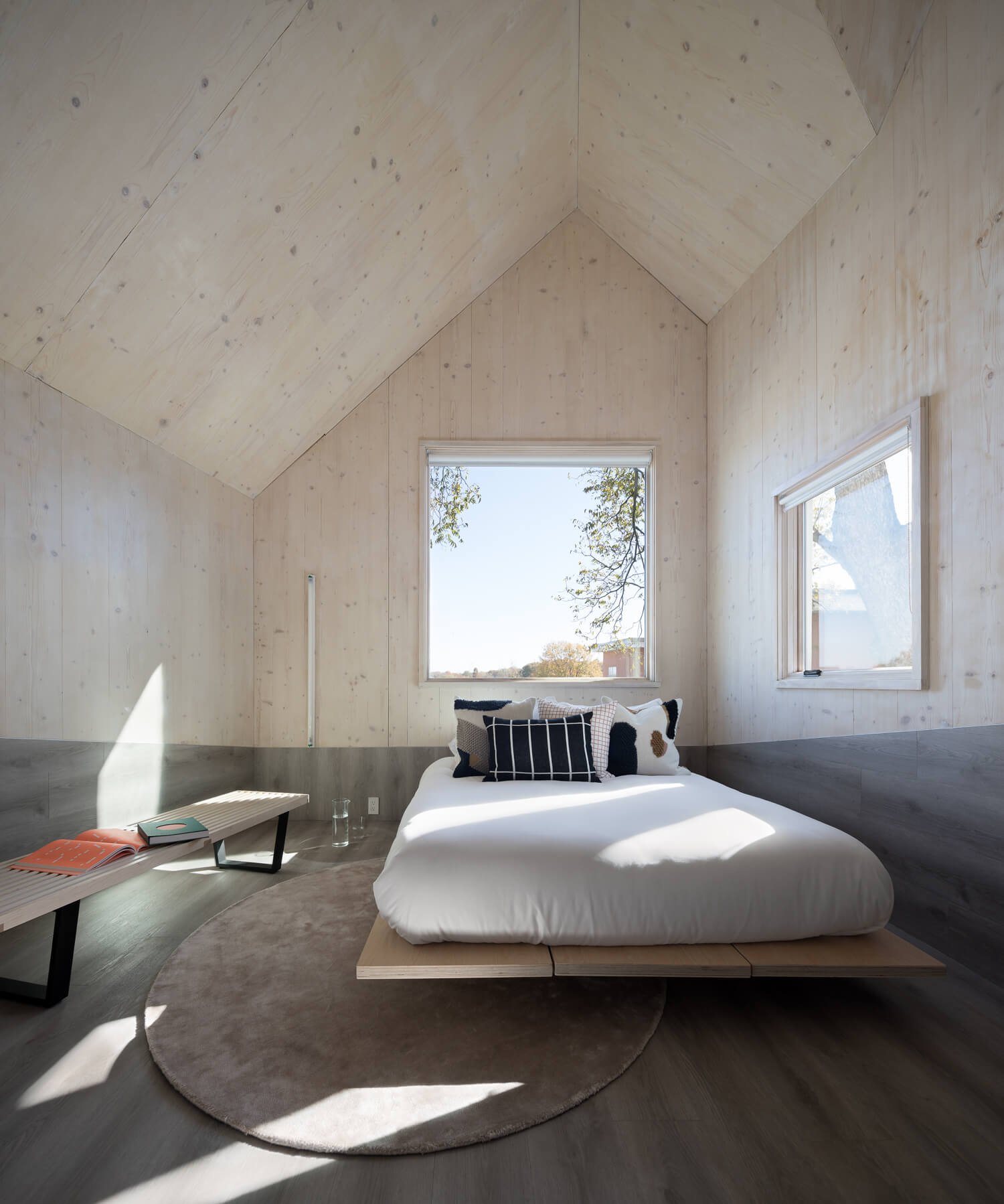 The ceilings’ unique angles – the result of a plan that combines six gabled roofs in a cluster – define the house’s rooms (including a covered balcony) as much as its walls do.
Growing up in Alabama, Bonner came to admire the tradition of faux- finishing, the use of cheaper materials to create the illusion of opulence

CLT is also easy on the eyes. Bonner left most of her interior walls unclad. She could have exposed them fully, except such a move would have given the space a woodsy, Scandinavian feel, which she wanted to avoid. “I’m an American architect,” she says. “I’m working in the South. I had to ask myself, ‘What should the interiors look like in this context?’”

As a child growing up in Huntsville, Alabama, Bonner came to admire the local tradition of faux-finishing, by which decorators use cheaper materials to create the illusion of opulence. “The rule was, ‘Fake it ’til you make it,’” she says. “There wasn’t the means to have marble shipped from Italy, so people painted elaborate veining on wood.” This aesthetic is distinctly Southern, authentic precisely in its lack of authenticity. 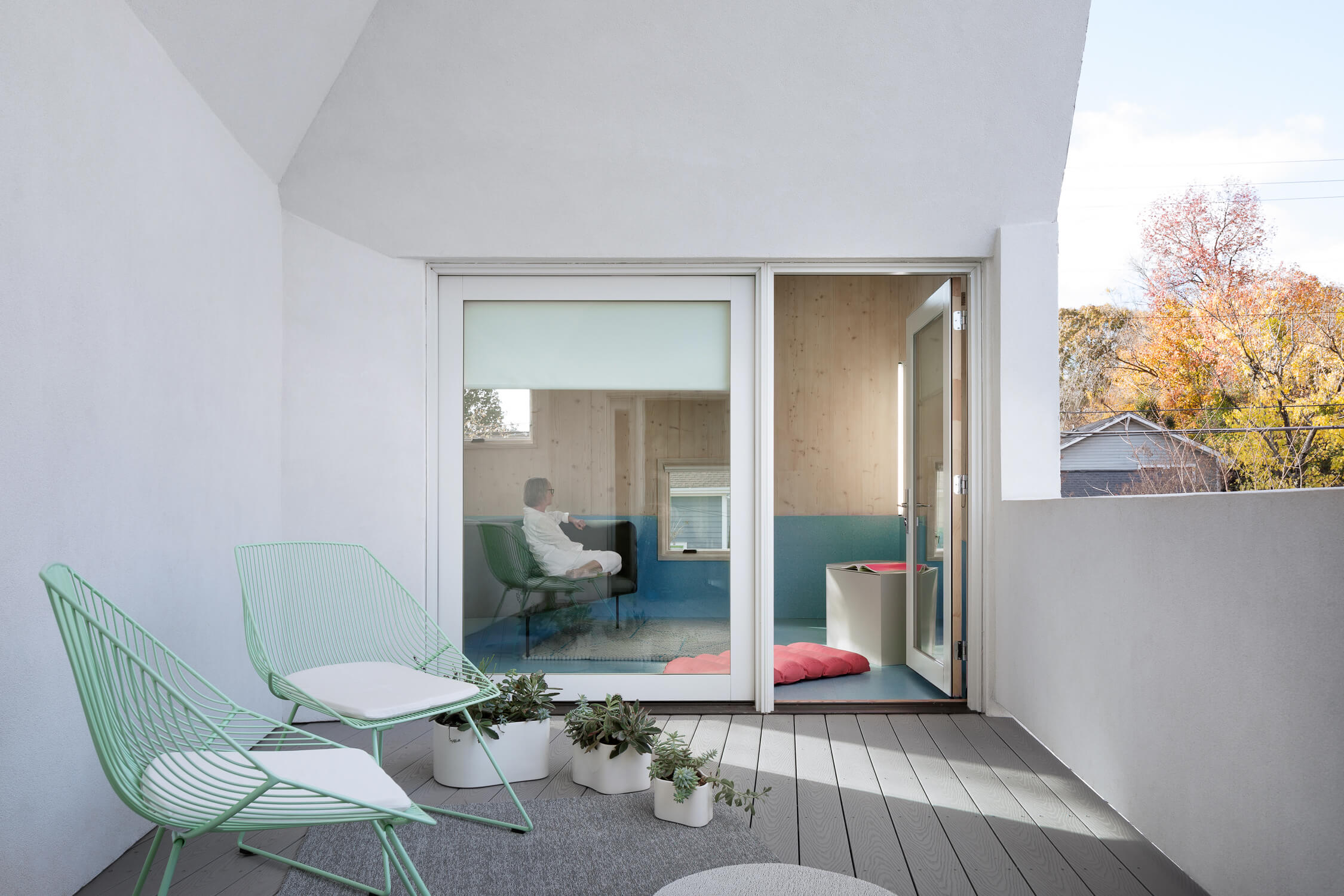 Haus Gables is a veritable museum of creative finishes. Each room has its own ad hoc material on the floors and wainscotting: a thin terrazzo veneer made of recycled cement in the kitchen, blue vinyl tile in the living room, a ceramic “marble” with painted magenta veins in the bathroom. These blocks of colour and pattern butt up against each other, like in a Mondrian painting.

The furnishings, many by female designers, are similarly lively. Bonner’s favourites include a plush, vaguely yonic chair by Annie Hiéronimus and a glass side table by Patricia Urquiola that shimmers like mother-of-pearl. “I didn’t hold back,” she says. “I wanted to push the design and the experimentation to the highest possible level.”

It is this anything-goes spirit that makes Bonner’s home so recognizably American. Walt Whitman, the bard of American humanism, believed that no subject, be it bawdy or sublime, was unfit for poetry. Bonner likewise draws inspiration from pop art, big-box stores and McMansions, all of which, for her, are compatible with good design. 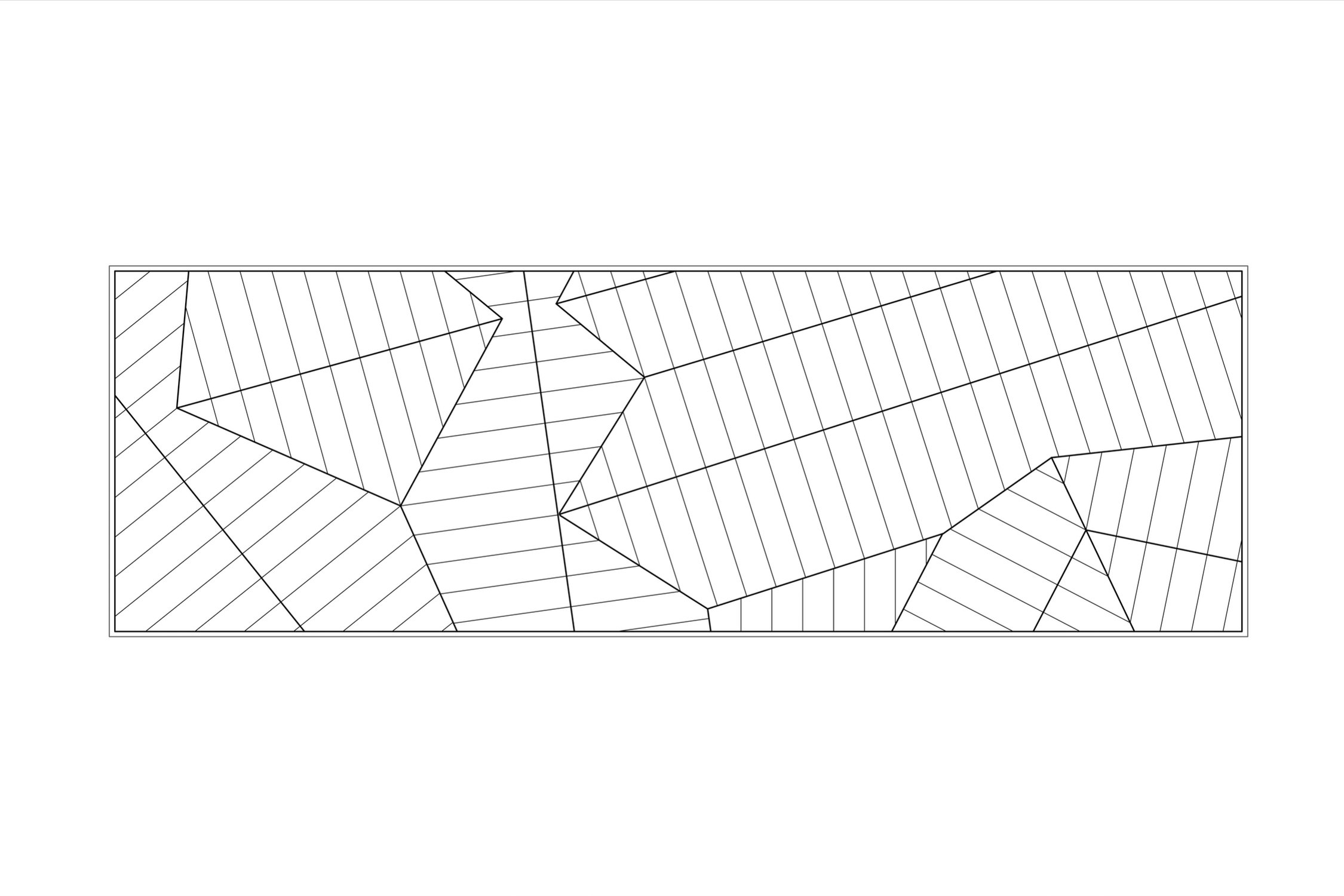 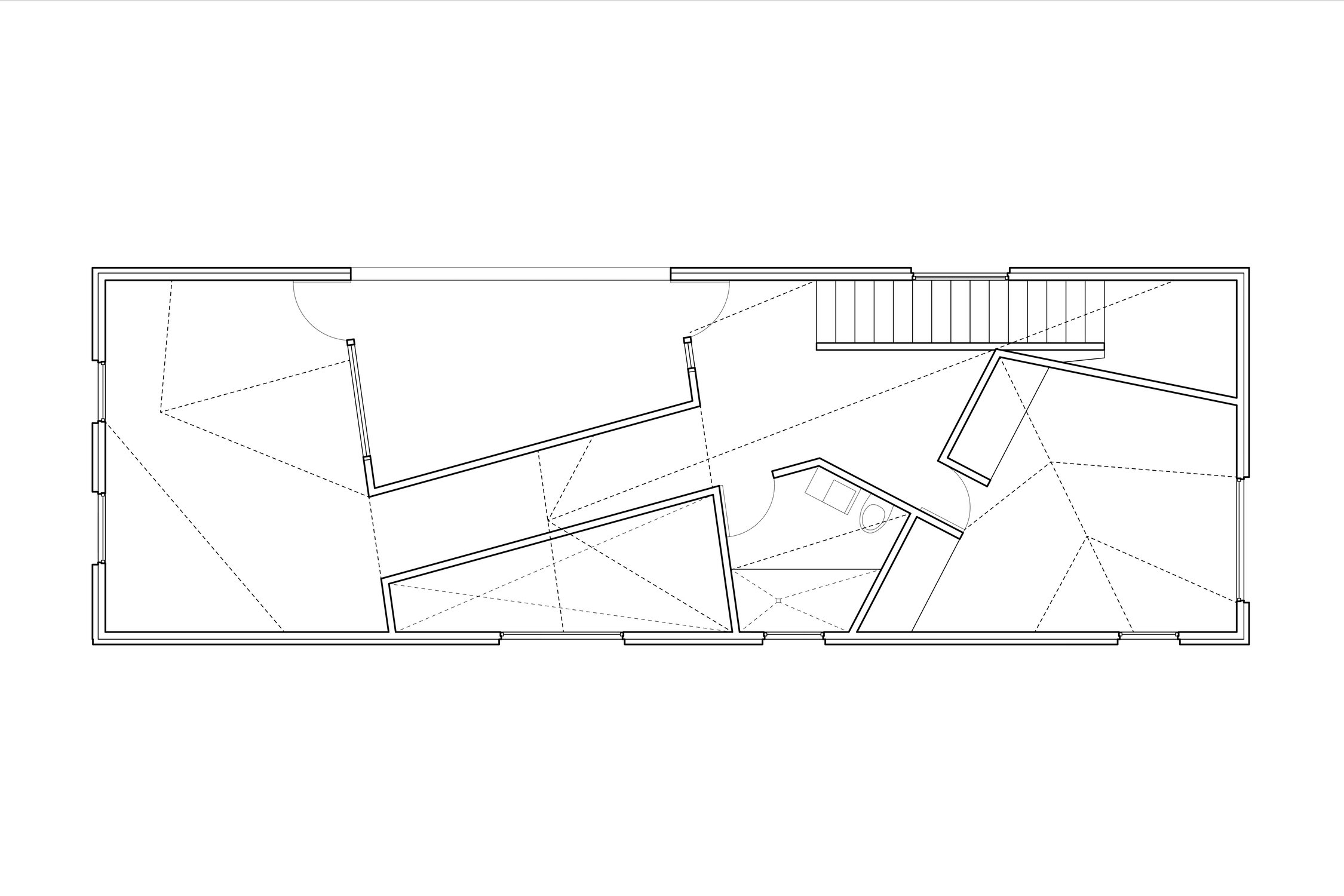 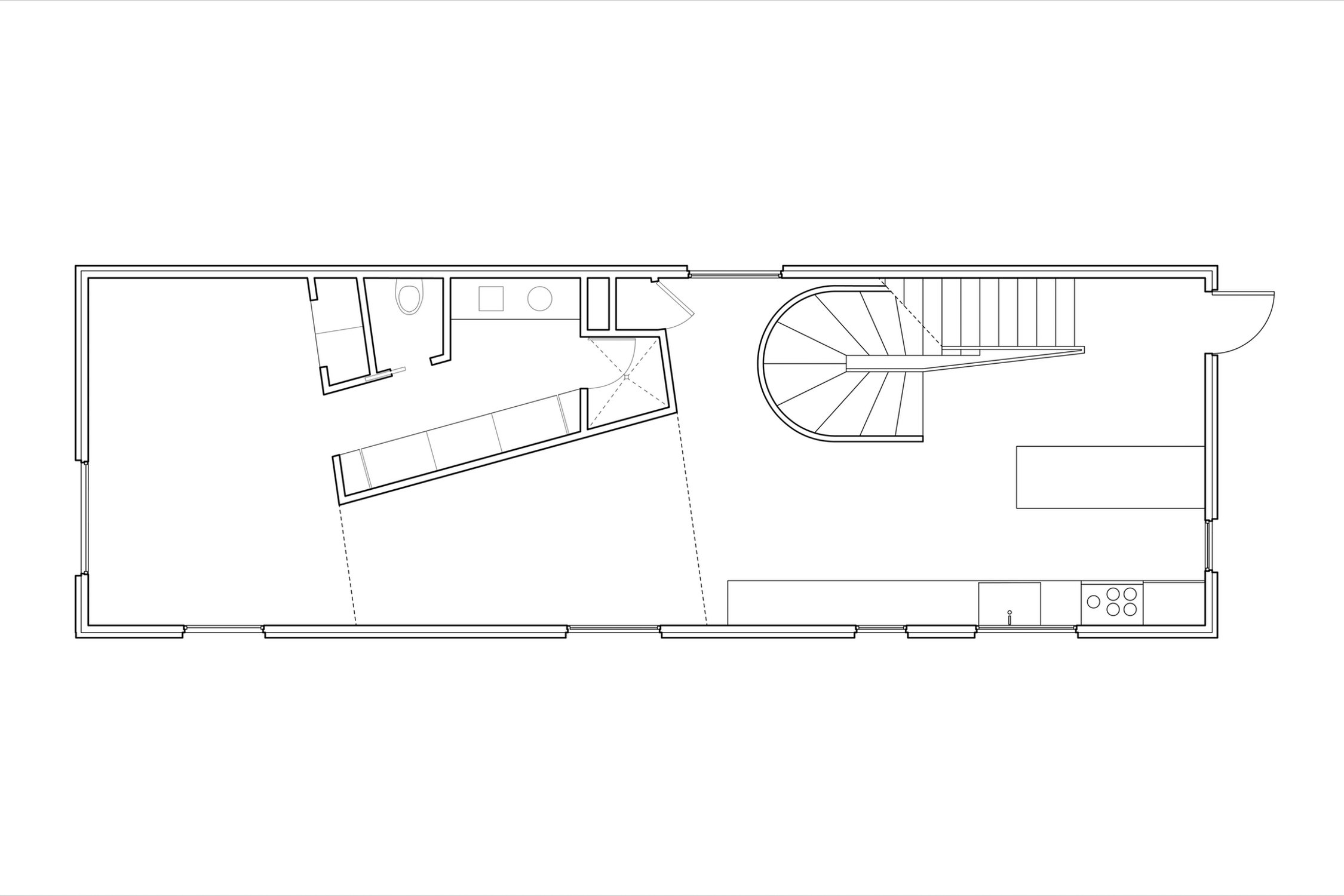 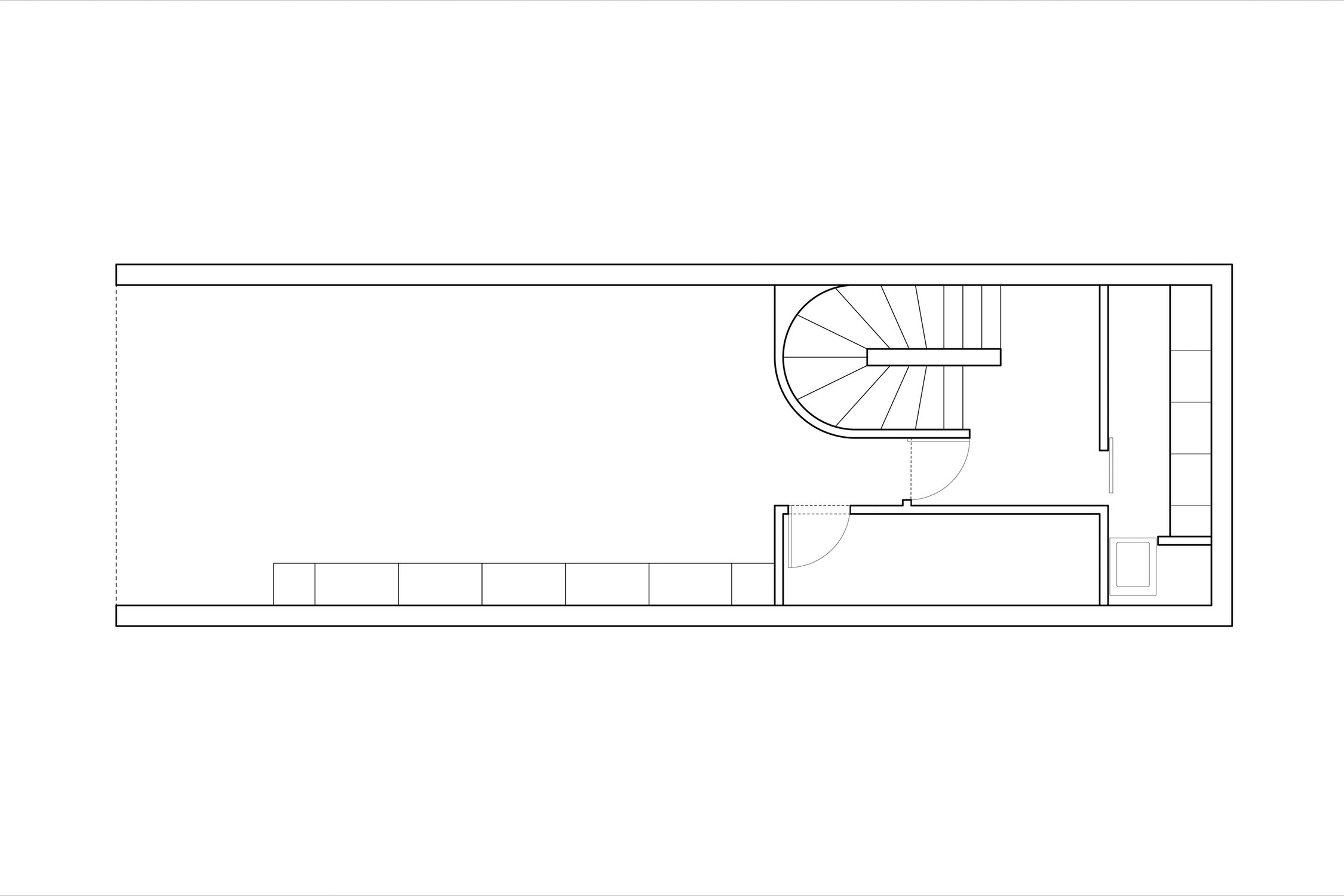 The most visible faux finish at Haus Gables is the exterior cladding. At Harvard, Bonner and an assistant spent four months designing a system to texturize stucco so that it resembles brickwork. They eventually created a “stamp” that would simulate the look of bricks when applied to a final coat of stucco. After coming up with her stamp process, however, Bonner learned that a similar technique already exists – one in which the imprint is made just before the last coat of stucco is applied. “I started bidding out the project to subcontractors in Atlanta,” she says, “and this one guy told me, ‘I did that before – on a job for Arby’s.’”

The rooms under the towering ceilings of architect Jennifer Bonner’s Atlanta home comprise a veritable museum of creative finishes.