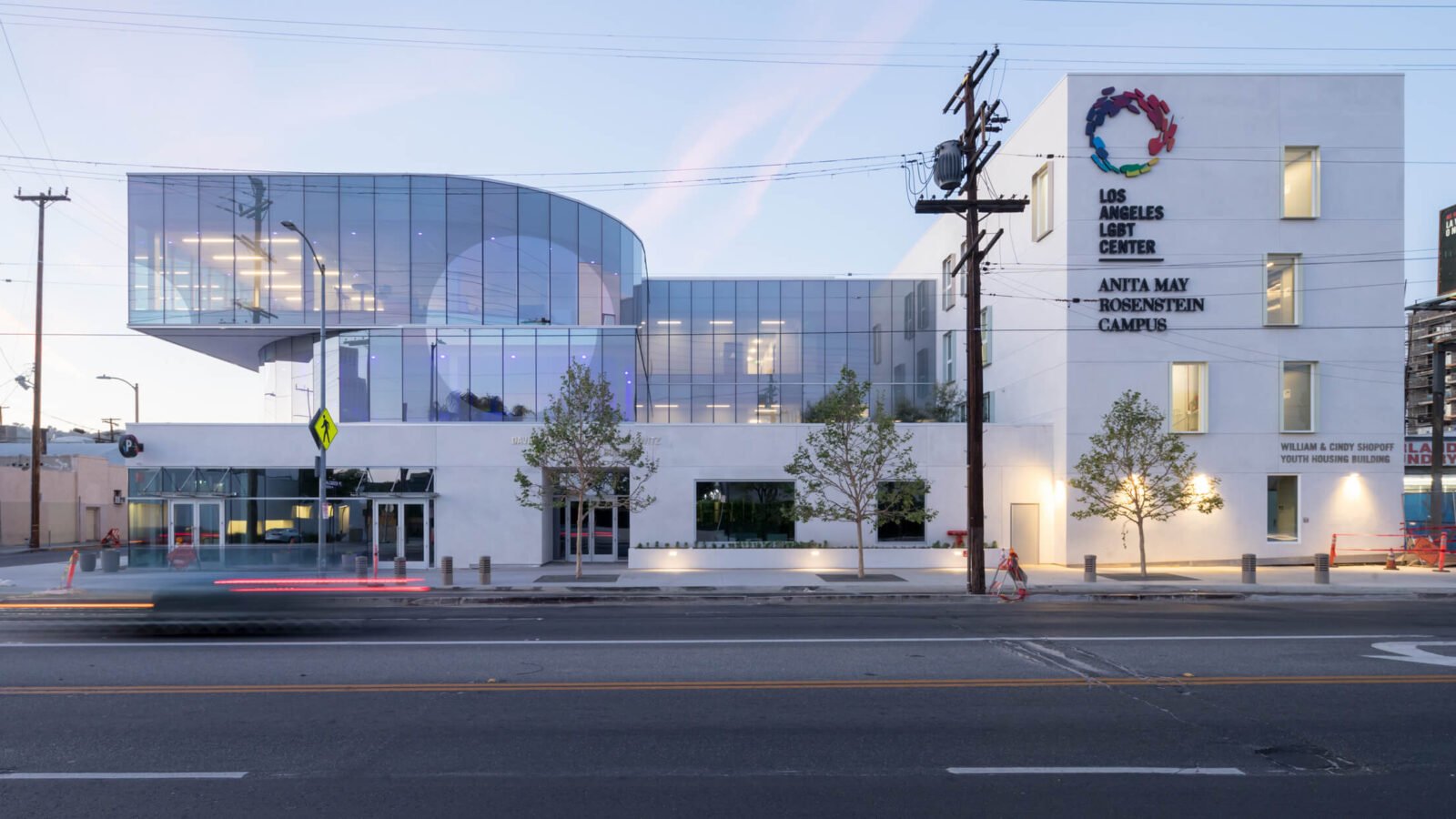 The Stunning – and Statement-Making – LGBT Center in Los Angeles

The welcoming hub brings together the LGBT Center in Los Angeles’ disparate locations into one striking glass building in Hollywood.

“Fifty Years of Queer” is the slogan announcing the Los Angeles LGBT Center’s semicentennial celebration this year. Yet despite its steadfast presence in the city, the organization – which says it serves more LGBT people than any other body in the world – has never had a cohesive facility that could accommodate its multi-faceted mission. Over the years, the Center’s health and housing services, education and advocacy programs and administration have all operated from disparate locations around Hollywood. With the April inauguration of the Anita May Rosenstein Campus, designed by New York–based Leong Leong with local firm Killefer Flammang Architects (KFA), that changed.

The campus comprises a series of glass and white stucco volumes, which wrap around cloistered courtyards and a rooftop deck.

The master plan (which covers over 17,000 square metres) employs a layered series of glass and white stucco volumes to accommodate 12 distinct programs, including transitional and emergency housing, communal areas, career-development and educational services, an event space and administration for the organization, which has about 700 employees. Affordable and supportive housing for youth and seniors will be added with the completion of the project’s second phase next year. Amplifying the architects’ challenge in developing this complex agenda was the need to provide privacy and security for clients, many of whom are homeless youth, while simultaneously creating an inviting public space with iconic architecture that would bolster the Los Angeles LGBT Center’s status worldwide.

“When people hear ‘gay centre,’ they think, ‘Oh, it’s going to be a little storefront with some beanbag chairs,’ ” says Alan Acosta, the Center’s director of strategic initiatives. “We knew this building could be a magnet, and represent what a focused, healthy and organized community can build.”

The dual mandate of creating both a safe space and a high-profile institution informed the plan, particularly in terms of massing, openings and visual access points. At street level, the need to combine a sense of welcoming with one of security translated into a continuous horizontal plinth – solid-looking yet porous – with an attractive plaza, distinct entrances for the various programs and a system of interior courtyards.

“We were looking at historic Hollywood courtyard houses as a point of reference for scale, that tradition of indoor–outdoor living and how that inner courtyard becomes a sort of sanctuary,” says partner-in-charge Dominic Leong.

Rising above the plinth are expressive transparent volumes that lend a strong civic presence, glowing at night to create what Leong describes as an “urban lantern.” The restrained palette serves as a canvas for multicoloured LEDs in the curtain wall. The facade is additionally activated by anamorphic projections cut through the frit; when viewed from precise locations by car or on foot, these coalesce into three perfect circles, a reference to the institution’s logo, as well as its nickname: the Center. “It’s another way of creating visual porosity,” Leong says. The frit pattern also helps to reduce heat gain, adds Barbara Flammang, manag- ing partner at KFA.

At the heart of the campus is Pride Hall, a 15.2-metre-tall, glass-enclosed event space with a curving wall that frames an interior courtyard and another angled wall that negotiates the urban plaza and connects visually to the organization’s existing arts centre across the street. The crystalline structure serves as both LGBT hub and public interface, not to mention a significant architectural presence for a historically marginalized community. “We were hoping to create a space that was uplifting,” says Leong. “One that you can go into and feel like this is a space of pride.”

The welcoming hub brings together the LGBT Center in Los Angeles’ disparate locations into one striking glass building in Hollywood.