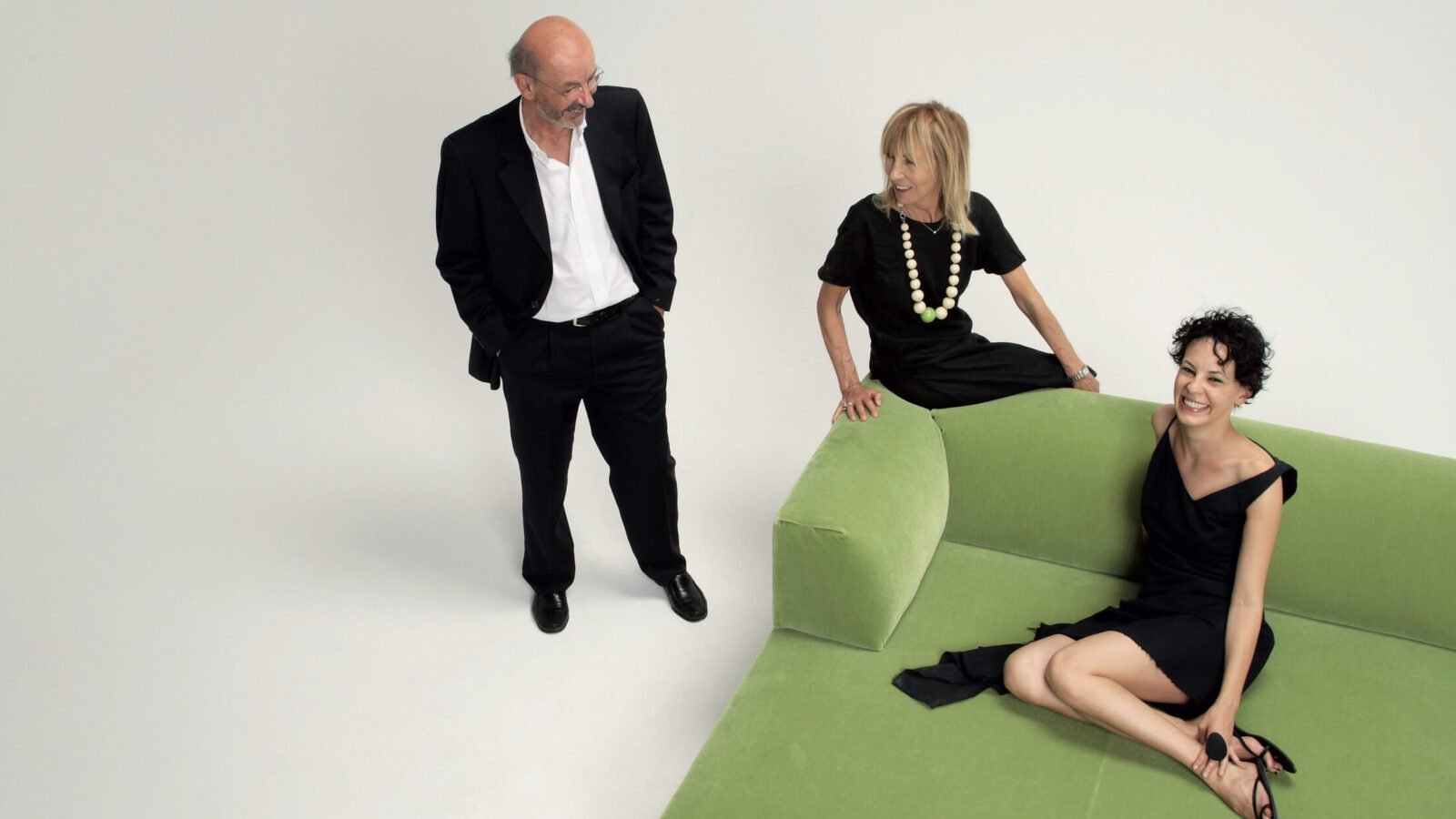 Three decades ago, a relatively unknown Piero Lissoni started art directing a plucky 20-year-old furniture company called Living Divani. Not long after, he proposed a Frog to them… and then that Frog became a bestseller. The rest is design history.

This year, Italian furniture manufacturer Living Divani celebrated two major anniversaries: the company’s 50th, plus 30 years of collaboration with art director Piero Lissoni. Still owned and operated by its founders, Renata Pozzoli and Luigi Bestetti (their daughter, Carola Bestetti, joined them in 2004), Living Divani has accomplished much for a family business, showing persistence and patience as well as an excellent nose for sussing out evolving business and aesthetic opportunities.

When Lissoni came on board in 1989, the company already had an impressive catalogue and a solid reputation in Italy for its clean-lined upholstered products. In combination with his studio’s strong graphic capabilities, Lissoni used his impeccable eye and his talent for anticipating stylistic directions to groom the brand for an international market.

Designed by Piero Lissoni, the Frog chair (above) launched in 1995. Living Divani was founded by Luigi Bestetti and Renata Pozzoli.

At IMM Cologne in 1996, the lowslung, wide and woven Frog chair (launched in Milan a year earlier) had a riveting impact, suggesting a completely new direction in furniture – casual and freewheeling, yet still very elegant. It was compelling enough to stop Nasir Kassamali, owner of the legendary Luminaire showrooms in Miami and Chicago, in his tracks. And poof! Living Divani had found its prince.

Carola Bestetti was living in L.A. when she got the call from her parents to come back to Brianza, the furniture hub north of Milan where Living Divani is headquartered. She gave up her plans to study fashion buying to become assistant art director, learning from the man who has been “like a big brother”.

Today, Carola liaises between Lissoni’s studio and the dozen or so other designers who collaborate on the growing Living Divani catalogue. In 2019, young up-and-comers showing work for the brand at the Milan furniture fair included David Lopez Quincoces, Keiji Takeuchi, Lukas Scherrer, Lanzavecchia + Wai, Stephen Burks and Leonardo Talarico.

“I’d say that, within the past three or four years, Piero has given me more room,” says Carola. “It’s a very open and honest conversation.” Her most significant contribution to the company is undoubtedly her strong aesthetic sense: Her enduring love of fashion and her own polished yet relaxed personal style get translated into both the brand’s collections and its marketing materials.

However, she also plays a key role in business development and strategy for the company, which has grown to 60 employees, doubled its revenues over the past five years and now reaches markets around the world.

In Milan this past April, Lissoni was practically everywhere, with sofas for B&B Italia and De Padova, lighting for Flos, tables for Porro and Knoll, a mirror for Glas Italia and a kitchen for Boffi, to name just a few of his collaborations. It definitely felt like his year. And with Living Divani, he was able to cap this extraordinary moment with a plum assignment.

In celebration of his 30 years as art director of Living Divani, Piero Lissoni was given free reign to create something special to mark the occasion. Drawing inspiration from various sources, including the art of Jeff Koons, he came up with a limited-edition collection that’s a study on the contours of furniture drawn in broad and thin strokes. 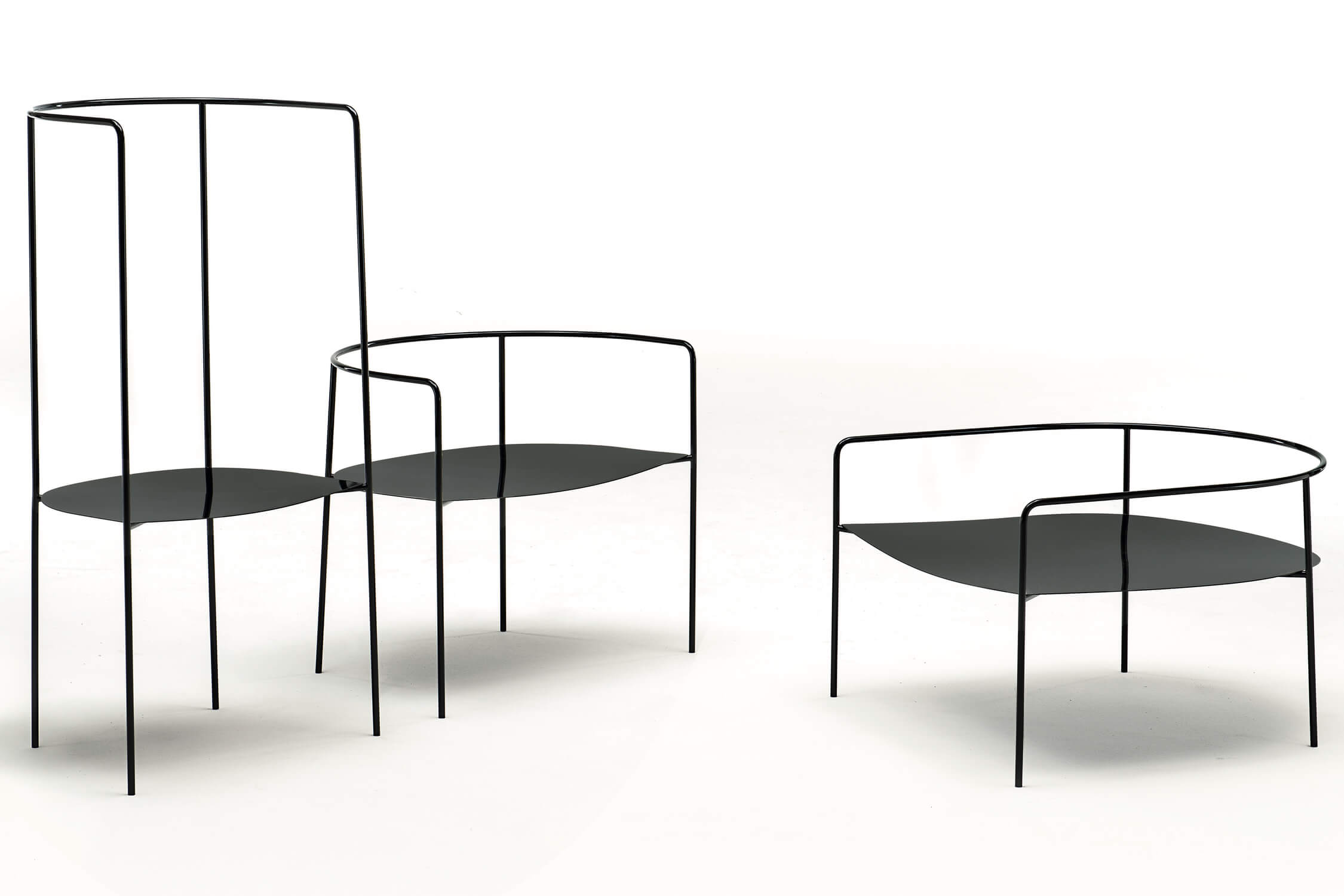 On one hand, the Uncollected Collection includes three very ethereal chairs and matching tables made of steel rod and aluminum. 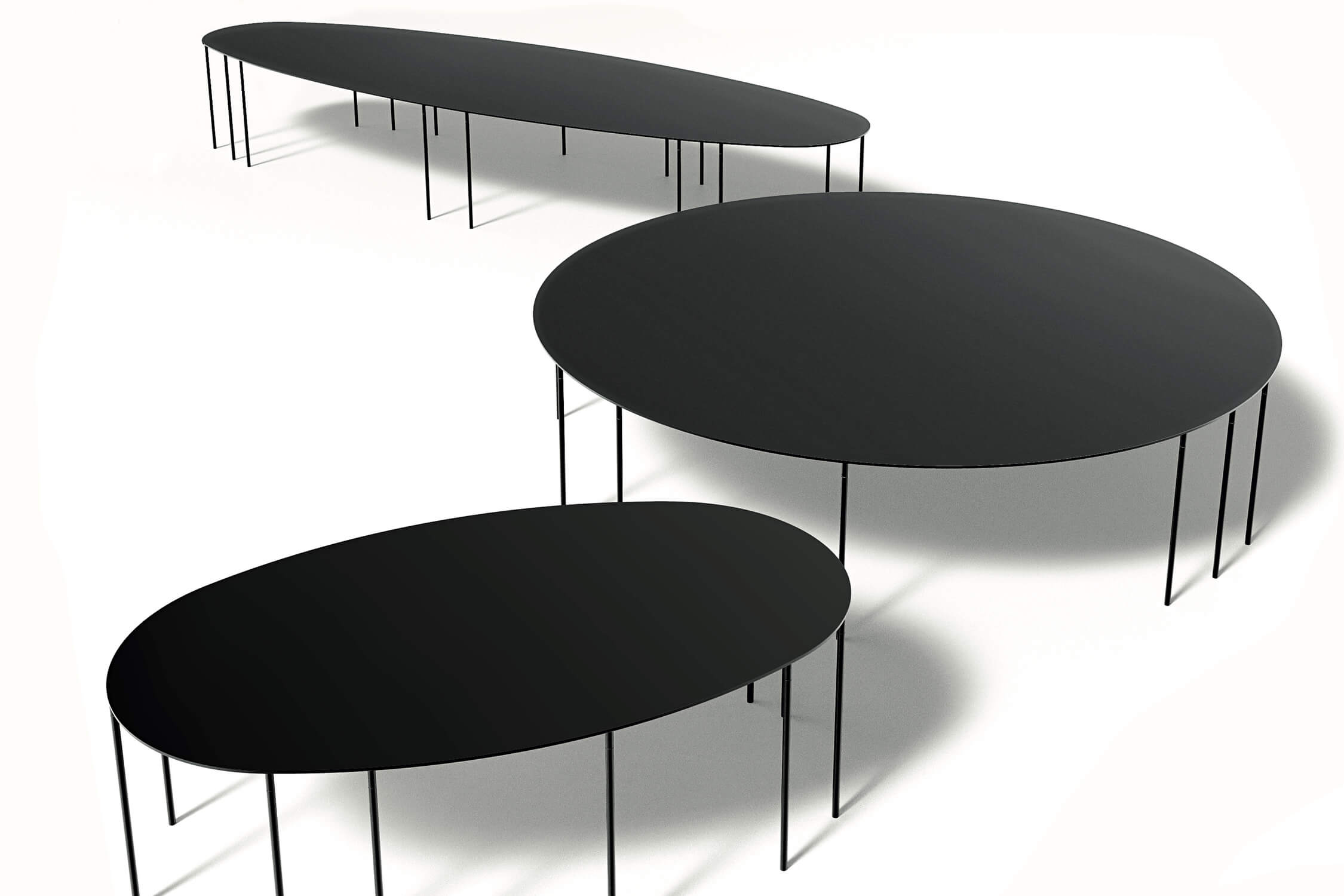 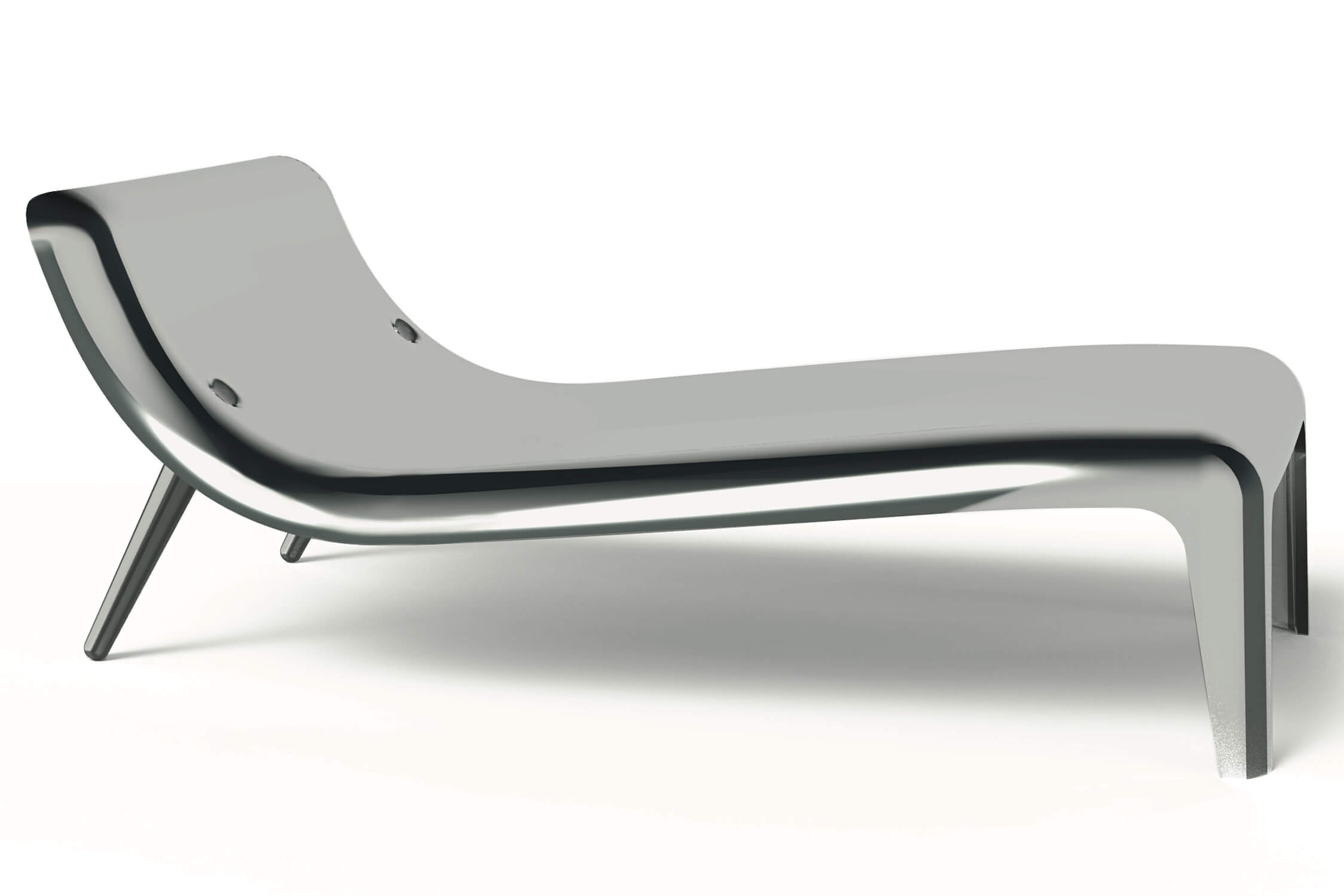 Contrasting these is a bulbous trio consisting of a cast-aluminum chaise longue, chair and low table in high-gloss silver, red or blue. 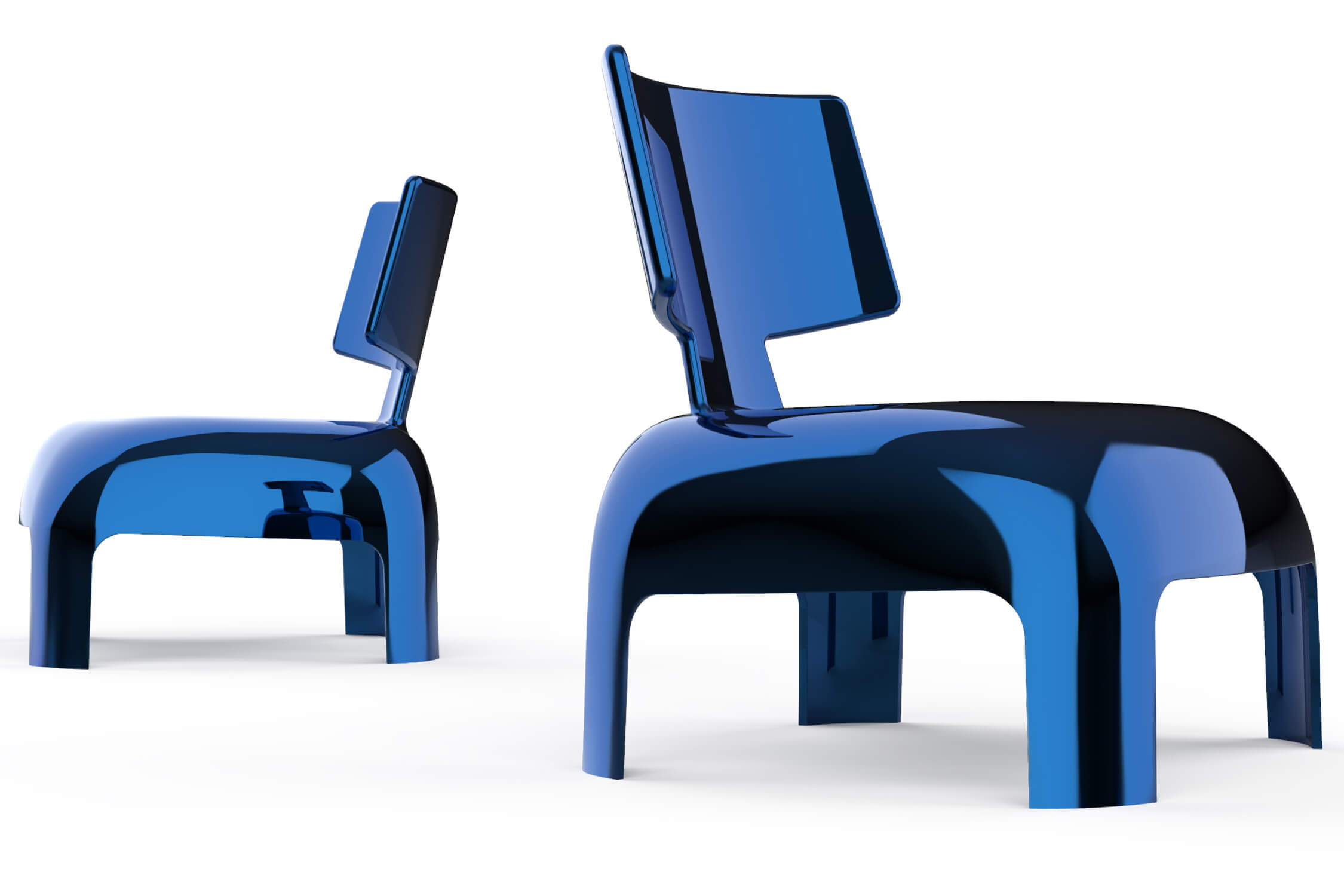 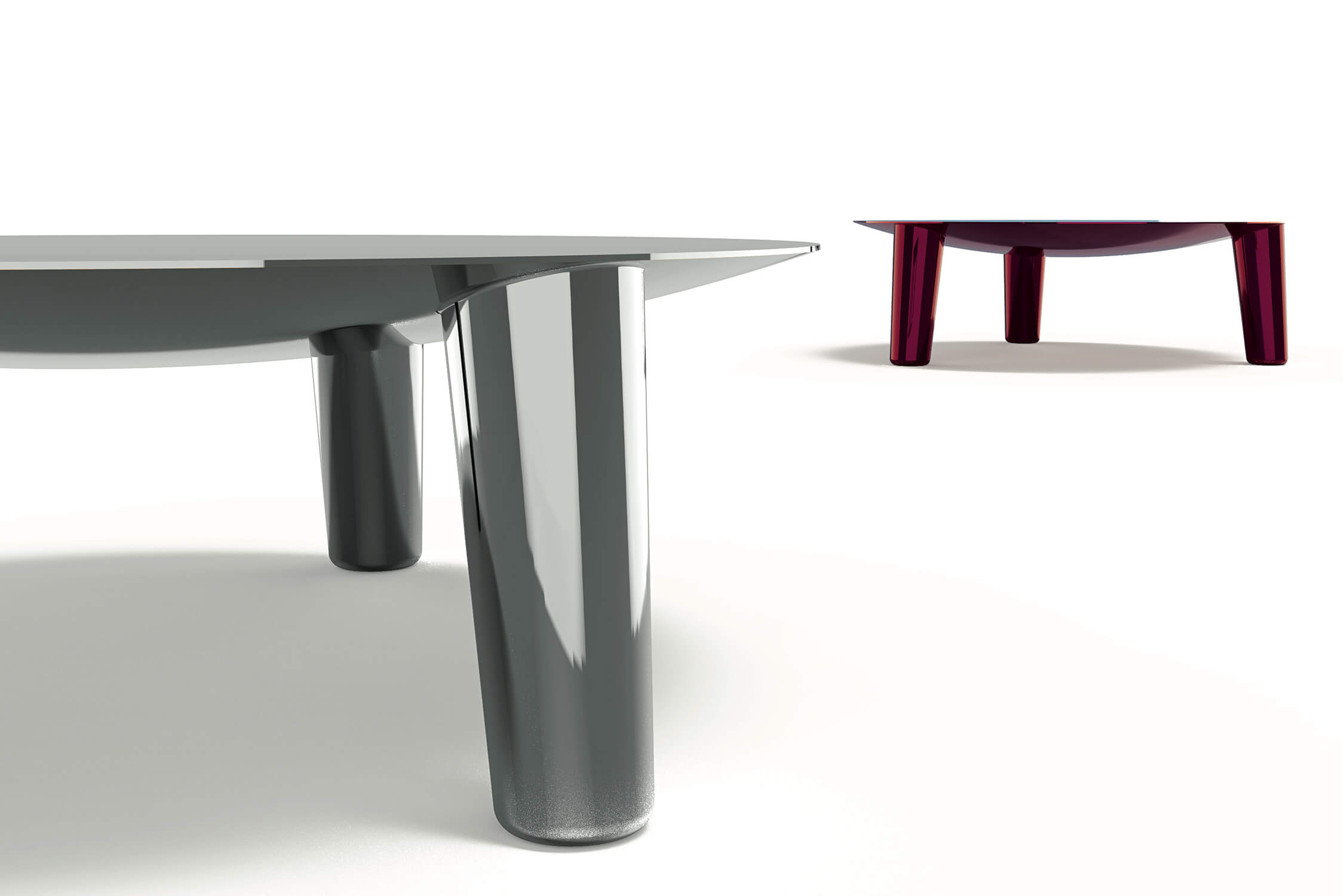 As part of the dual anniversary celebrations, Lissoni was invited to create a special collection and exhibition. Carola’s direction to him was: “I give you carte blanche. Do whatever you like. It doesn’t have to be related to furniture.” For the resulting Uncollected Collection, Lissoni stayed within the furniture realm, but barely, working with two opposing ideas, each with a strong graphic effect.

The result is almost the outlines of furnishings. On one hand, the collection includes three very thin and ethereal chairs and matching tables made of steel rod and aluminum. At the other end of the spectrum is a bulbous trio consisting of a chaise longue, chair and low table in high-gloss cast aluminum.

If Lissoni took the company slightly outside of its comfort zone, no one is complaining. “Living Divani is not just an upholstered furniture company,”says Carola. “Merging with the world of art has always been important to us. This was our chance to celebrate Piero’s creativity.”

Piero Lissoni created a magical showcase for his Uncollected Collection in the garden of Milan’s historic Palazzo Crivelli. Displayed inside a series of linked pavilions outfitted with mirrored surfaces, the furniture merged with the garden in an unending play of reflections, shadows and light.

When Lissoni first approached Carola to talk about his sources of inspiration, “he sent me images of Jeff Koons’s work,” she says. Unveiled on the grounds of the early-18th-century Palazzo Crivelli in downtown Milan, the brilliantly coloured castaluminum pieces inspired by Koons’s iconic Balloon Dogs set up a dialogue with their attenuated, insect-like counterparts, particularly the 440-centimetre-long table balanced on multiple legs “like a centipede.”

Shown within a maze-like pavilion, Lissoni’s Uncollected Collection blended dreamily into the evocative setting, multiplying and merging with its surroundings through the mirroring effect of the floor. The next step is to figure out how to bring the Uncollected Collection to the art-furniture market, opening a brand new chapter in the Living Divani legend. livingdivani.it

Over the past decade, Living Divani’s Carola Bestetti has, together with Piero Lissoni, been talent scouting to expand the roster of the company’s designers.

Maintaining its long-term focus on clean silhouettes and restrained palettes, the firm’s product catalogue now goes well beyond soft seating to include outdoor, bedroom and storage pieces. The casual energy and sophistication that unify the collections span geographies and generations. 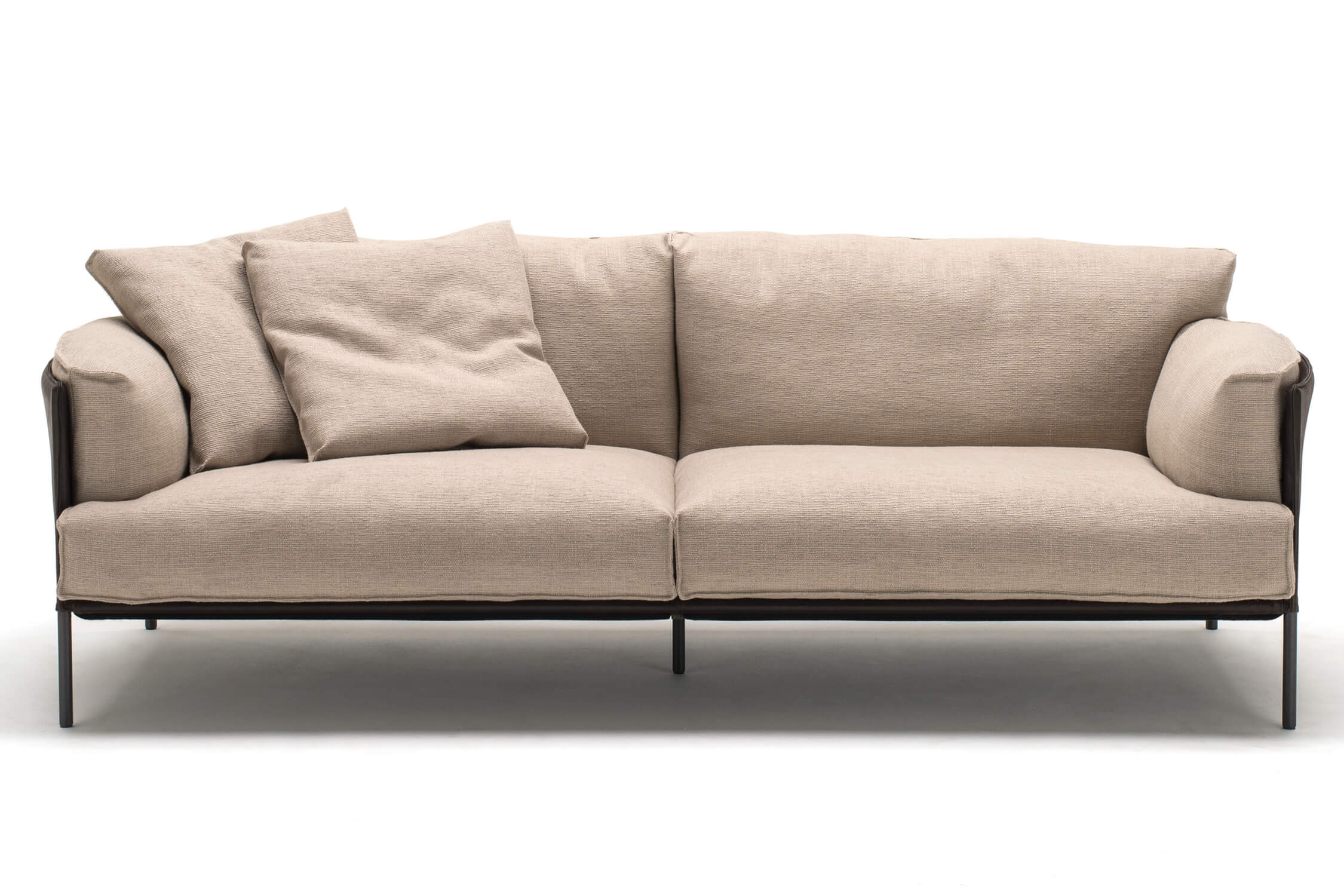 Among the designers collaborating on the 2019 collection is Spanish designer David Lopez Quincoces, whose Greene sofa is defined by its structured perimeter and slender legs. 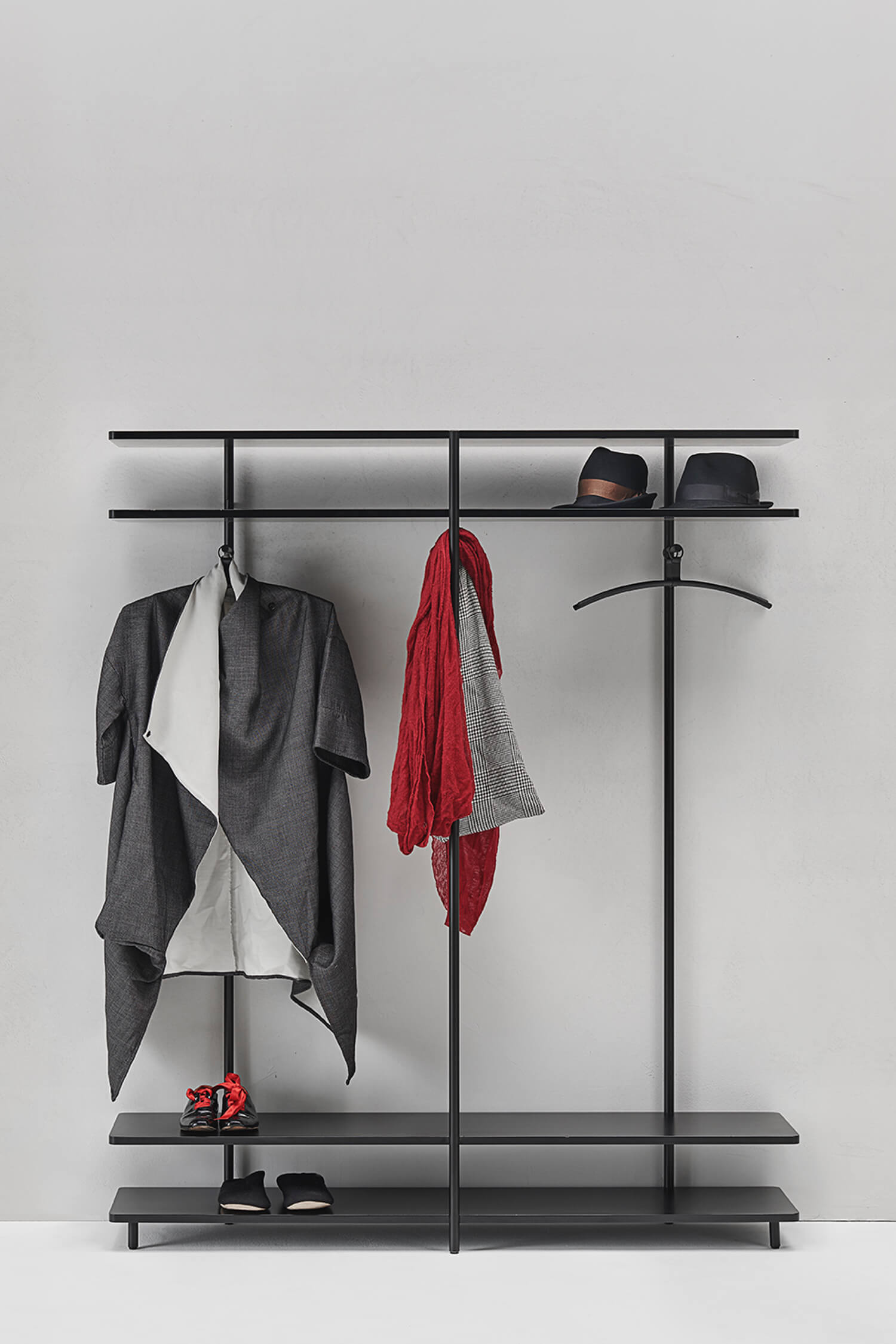 Another is Shibuleru, the studio founded by Lukas Scherrer, whose Aero V shelving system works for both entranceways and hotel rooms. 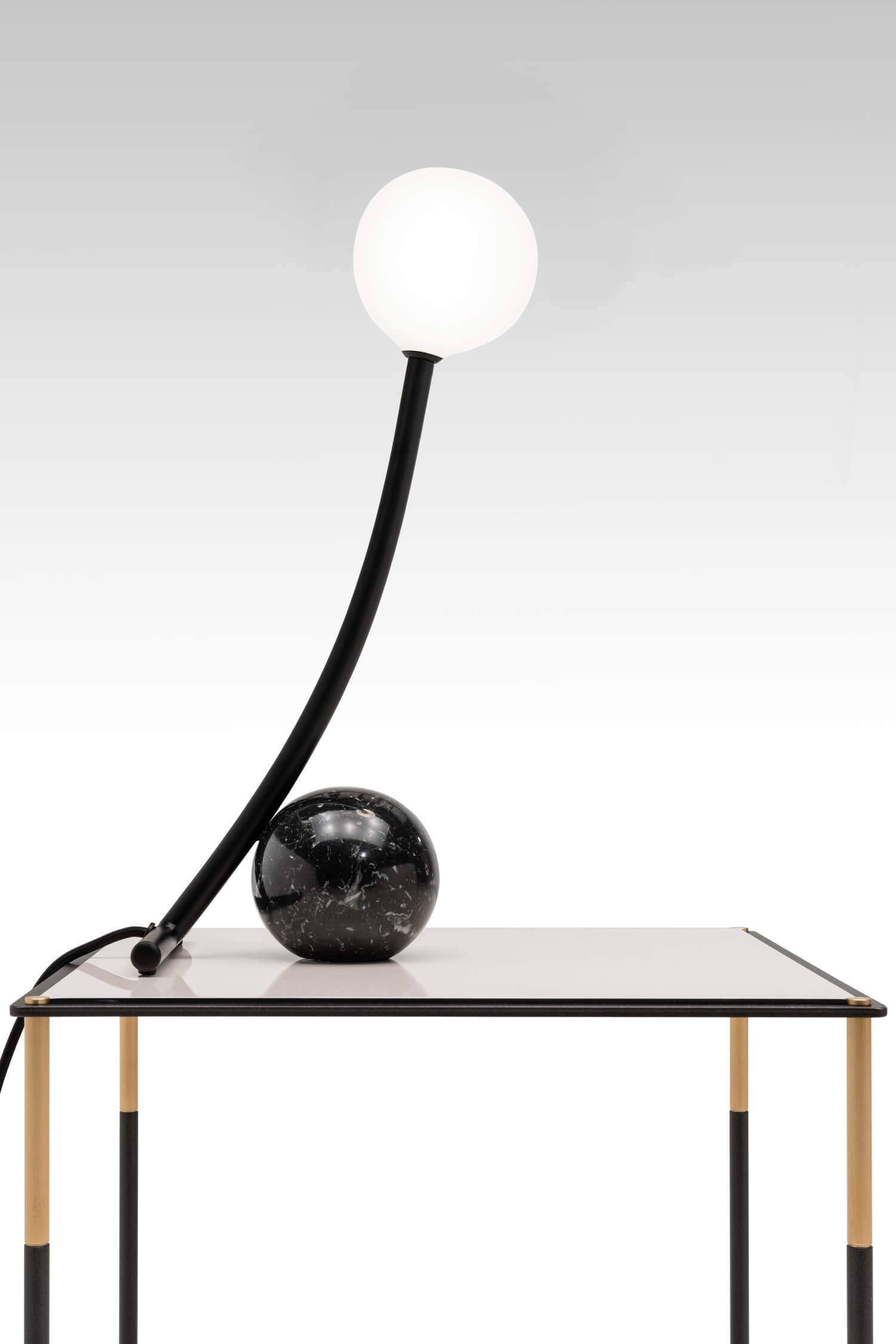 And 2019 marks the company’s first foray into lighting: a collaboration with young Italian designer Leonardo Talarico, who contributed the Materica table lamp. 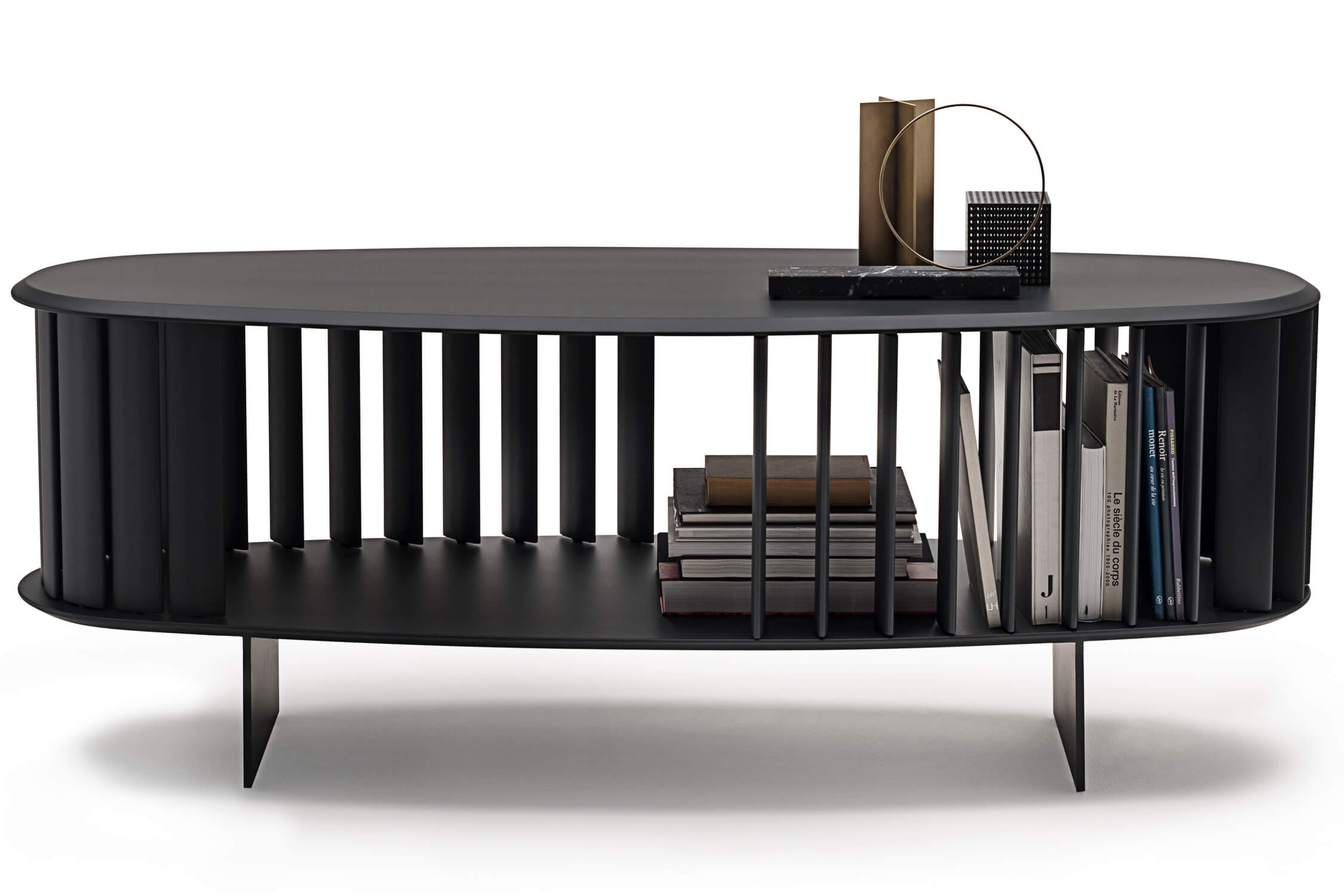 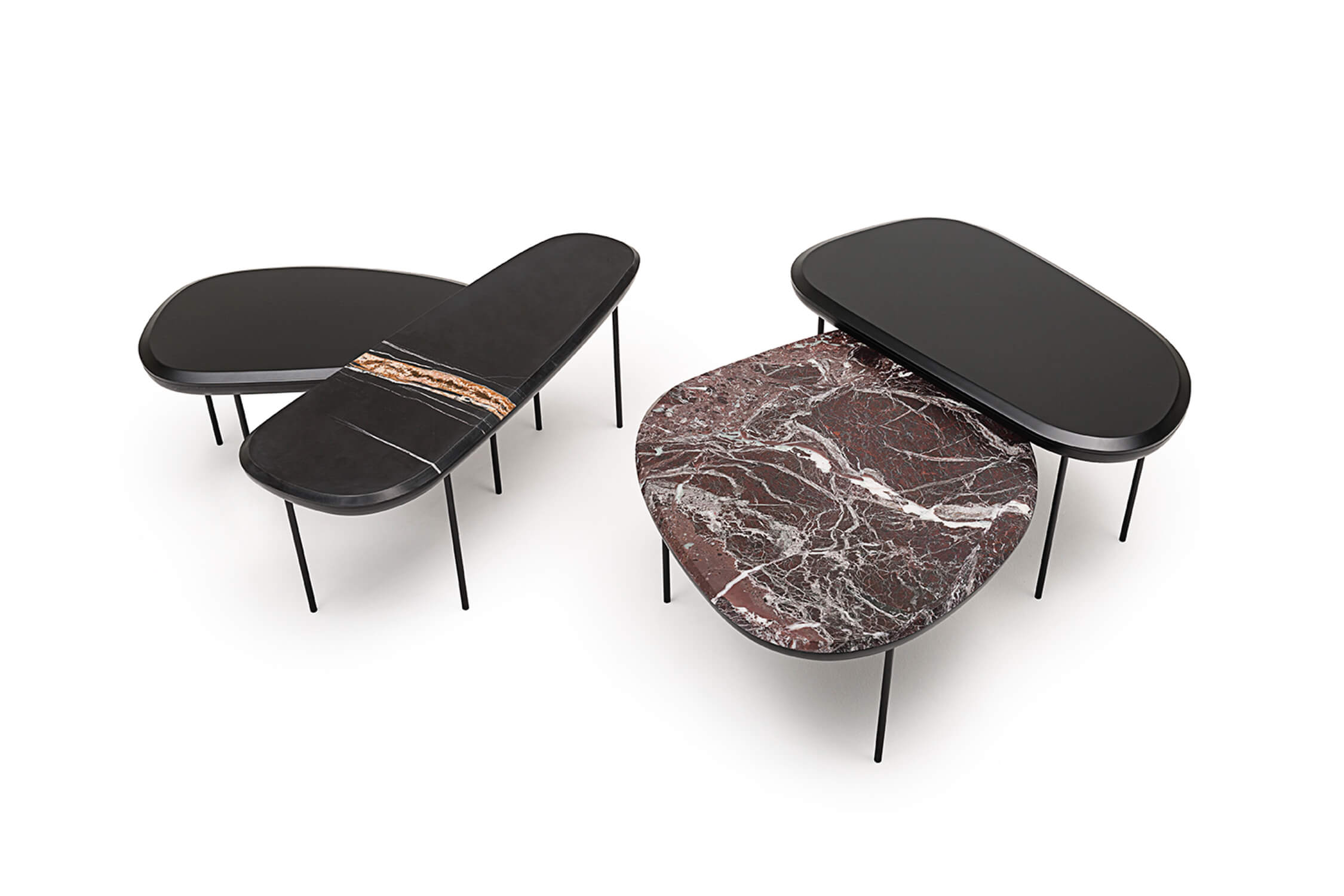 Three decades ago, a relatively unknown Piero Lissoni started art directing a plucky 20-year-old furniture company called Living Divani. Not long after, he proposed a Frog to them… and then that Frog became a bestseller. The rest is design history.