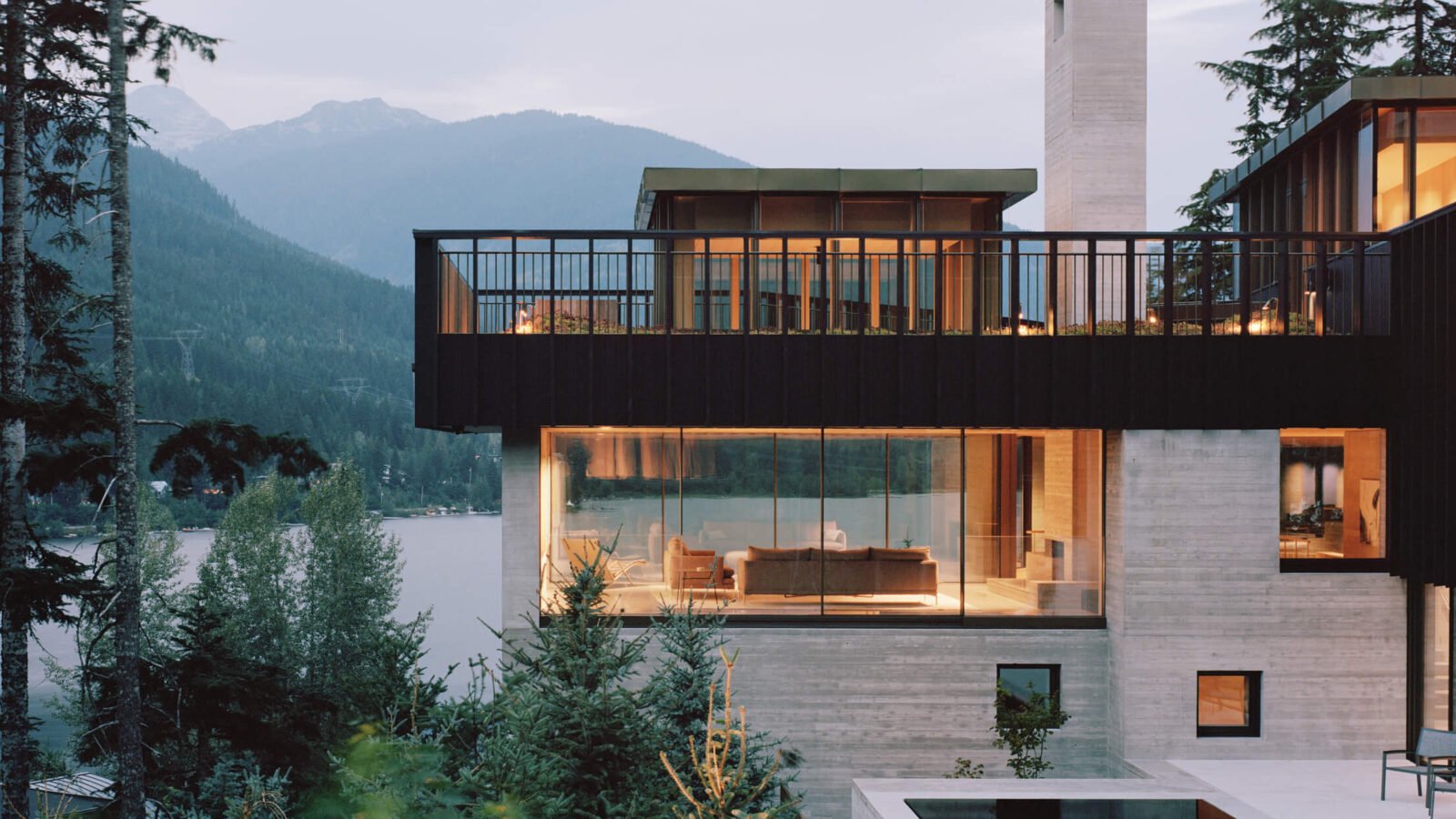 A Whistler House Grows From the Landscape

Composed of volumes that rise and
fall with their setting, a mountainside
aerie by Gort Scott – the British firm’s
first finished project in North America – is a real architectural cliffhanger.

Serious architecture begins with serious aspirations. And when the London practice Gort Scott took on a house in Whistler, British Columbia, it came with the loftiest of goals. “This is not a typical resort residence project,” the client wrote in a vision statement to the designers. “It is an architectural expression of self.”

Yet the client also wanted a house that would harmonize with its context, a dramatic ridge above Alta Lake in B.C.’s Coast Mountains. Gort Scott shaped these ideas into a home – rendered in concrete, brass and wood – with its own complex personality. 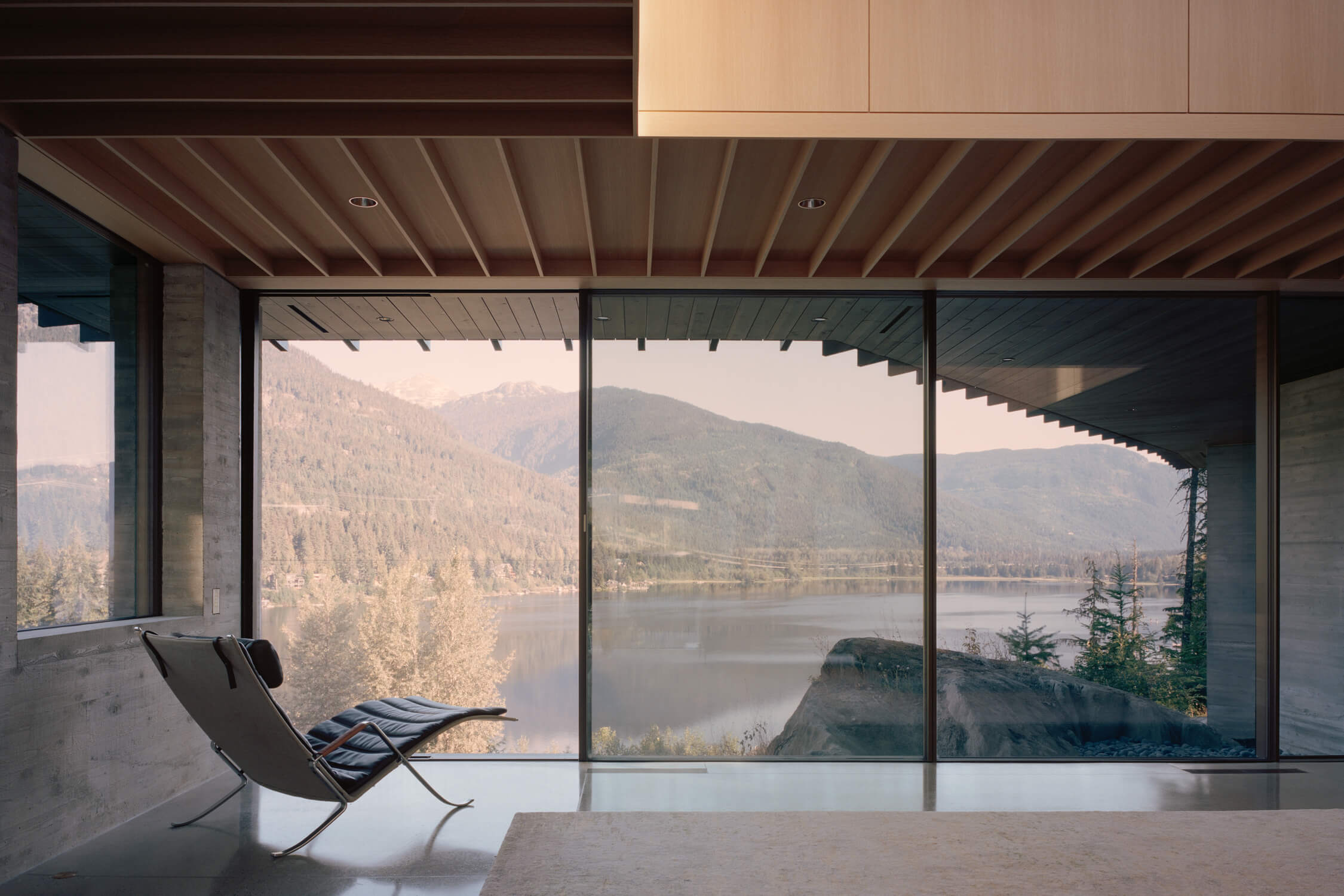 The heavy concrete walls of the main residence are pierced by windows that carefully frame views, be it Alta Lake from the living room or a stand of hemlocks from the kitchen.

Dubbed The Rock, the six-bedroom house and two-bedroom guest house constitute a set of volumes placed between stands of hemlock trees, the architecture rising and falling with the land.

According to the architects, this desire for equilibrium reflects their own sensibilities as well as the client’s. “The most important thread in our work is a deep interest in context,” says Gort Scott co-founder Fiona Scott. “That applies as much to rocks and trees as to an existing building.” 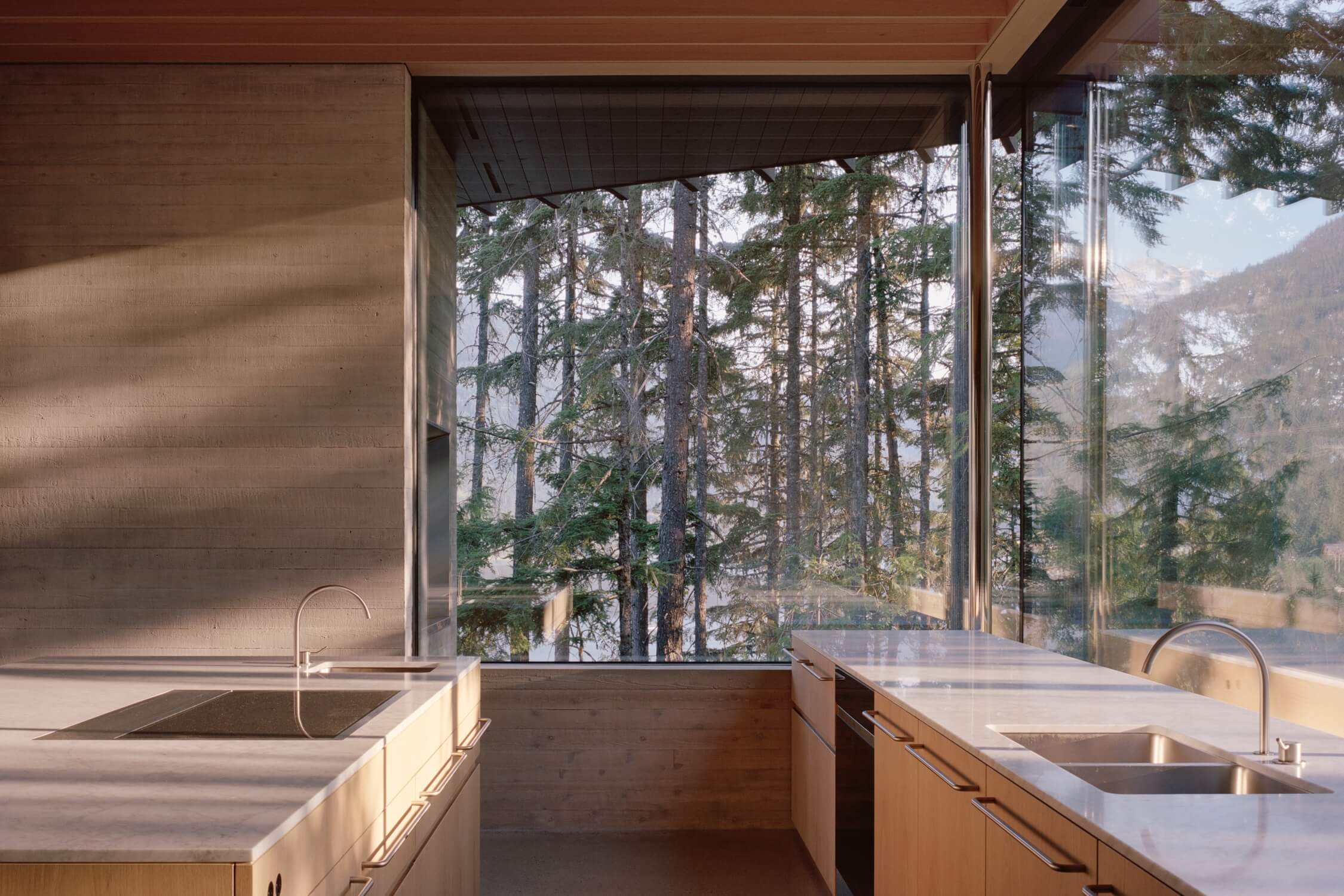 The client – a father of three recently retired from a transpacific career in business – shared this view. “Quite simply, this is an extraordinary place,” he says.

He conducted an invited design competition and selected Gort Scott after the architects travelled to see the site in person. “We spent a week there just absorbing the place, examining the views, watching the light as it changed through the day, experiencing this journey to the top of the rock,” Jay Gort recalls. 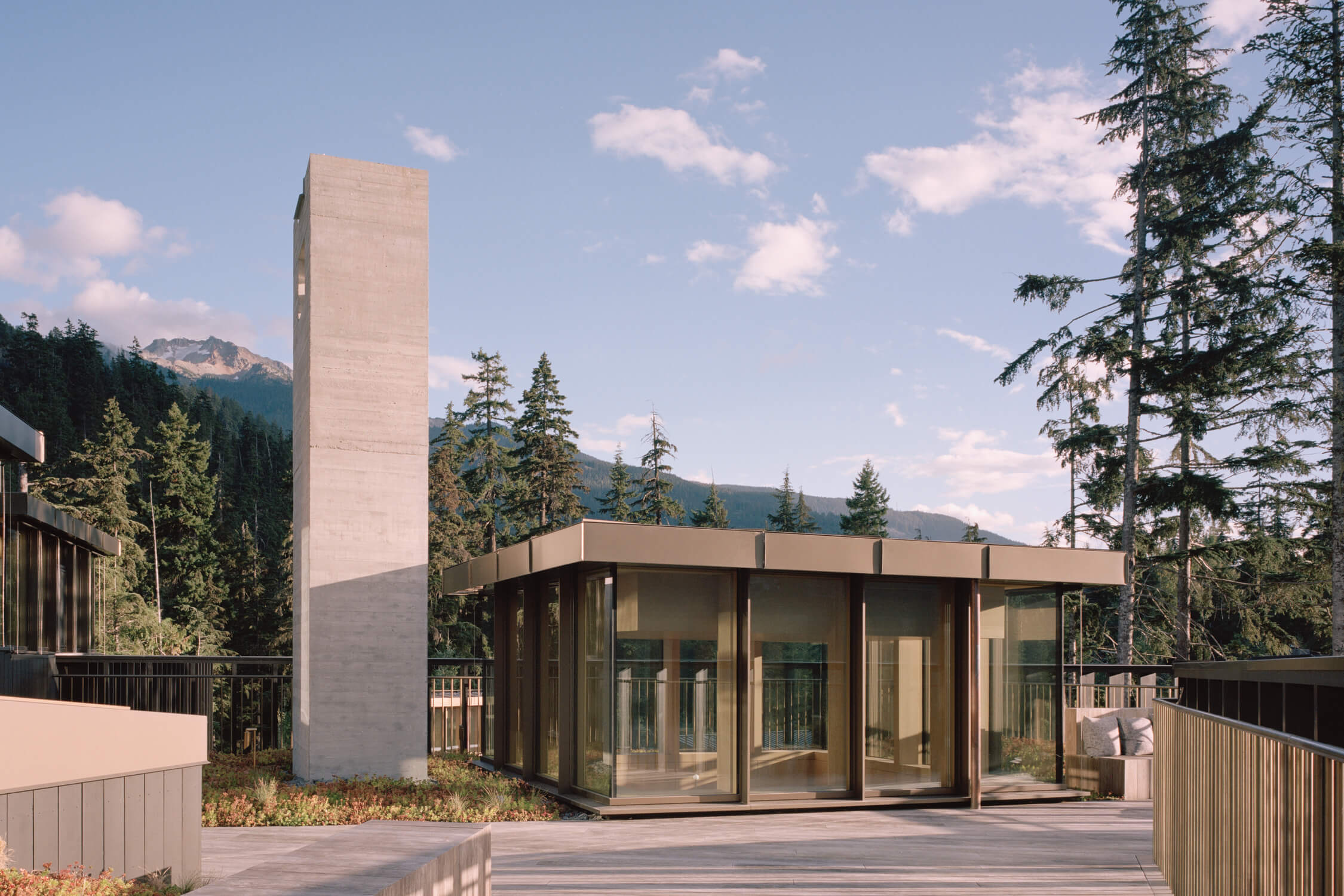 The property is dotted with vertical elements that jut skyward like stalagmites. “The building grows up out of the rock,” says Jay Gort, and the living space, including eight bedrooms in total, “is framed between those pieces.”

The design duo’s basic idea appeared in an early pencil sketch of a rocky outcropping with a smaller volume hovering on top of it and, in between, a contained space that has views outward in all directions.

Gort Scott elaborated this concept into a concrete structure that rests on the bedrock and sends a series of vertical elements upward like stalagmites, where they are topped by a structure of wood. 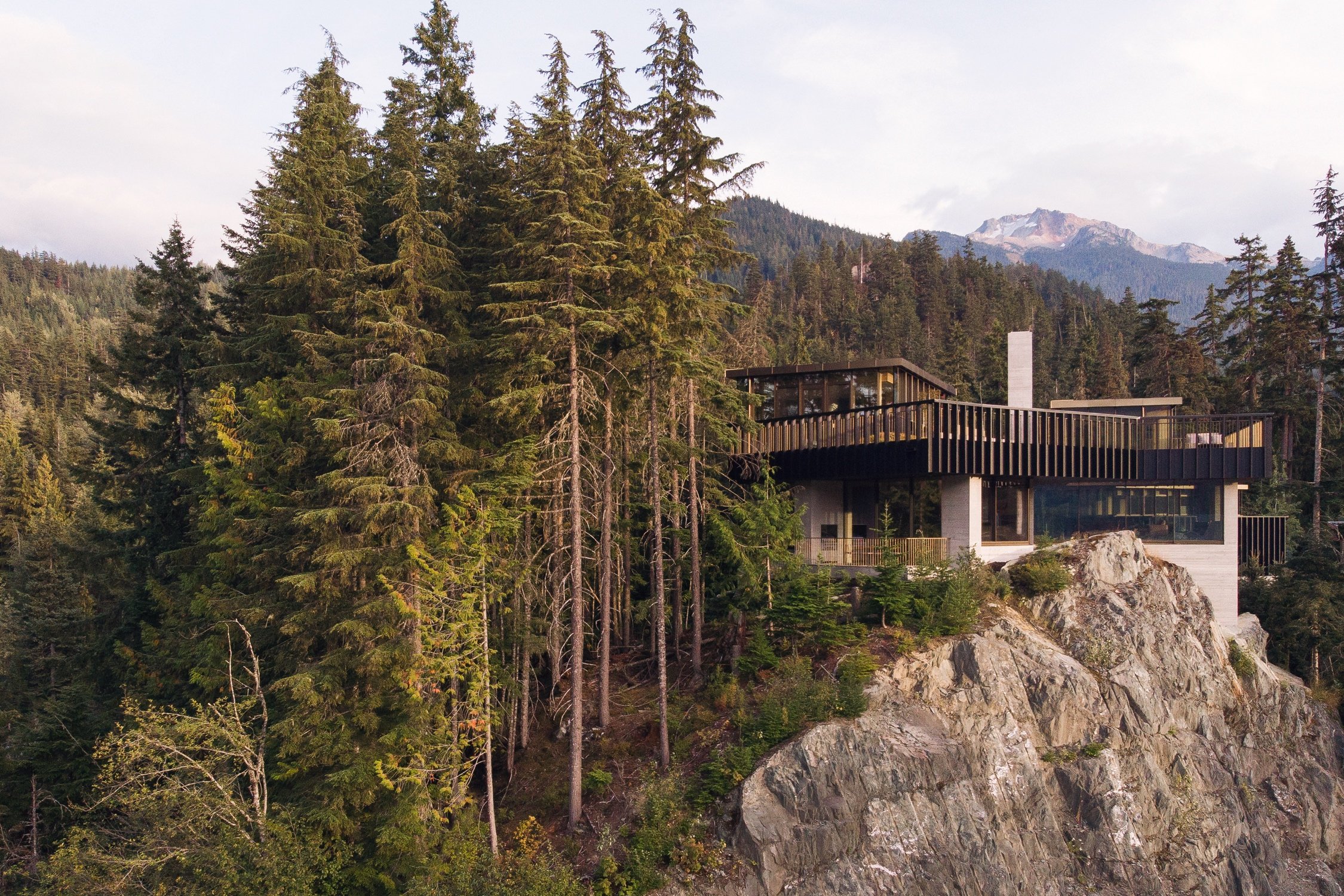 The Rock, a lakeside home executed by British firm Gort Scott in B.C.’s Coast Mountains, was designed to harmonize with its context.

“The building grows up out of the rock,” Gort says, “and the living space is framed between those pieces.” At the entry, visitors cross a bridge over a small gully, then move into a lower level defined by concrete so precisely mixed and poured that its surface reveals the knots in the cedar boards used to form it.

Throughout the project, the concrete comprising the floors and walls is “absolutely a work of art,” the owner says, crediting the skills of building company Dürfeld Constructors and of concrete contractors BMak Construction.

The heavy walls are pierced by windows that carefully frame views of the woods and sky. “You feel as though you’re in the earth,” Gort says, “and then you ascend to the living space above.” 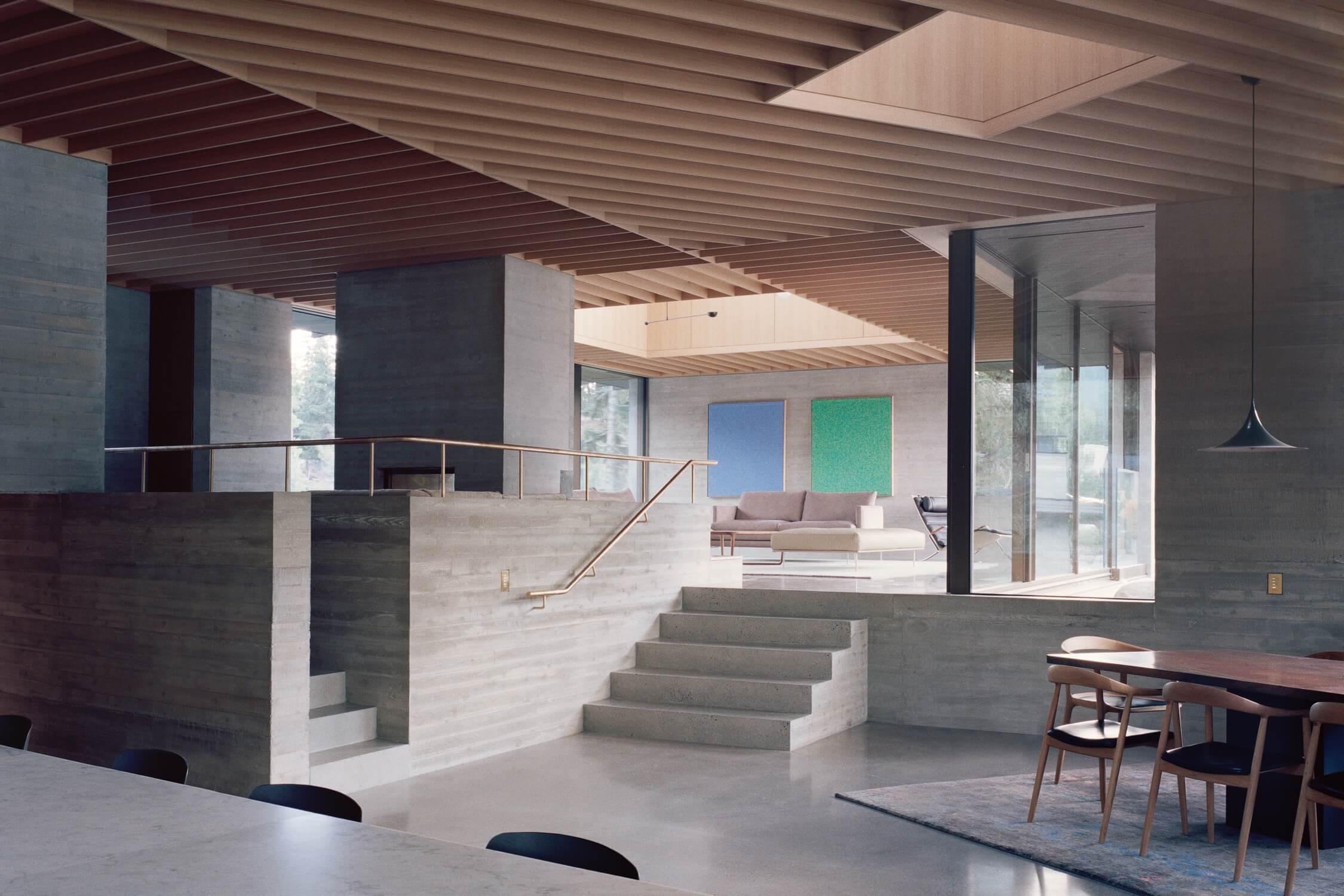 A concrete staircase paired with a polished brass handrail leads from the kitchen and dining area to the elevated living room above it. The house’s internal topography reflects the sloping landscape outside.

That living space – as in that early pencil sketch – is an in-between zone. It has a poured-concrete floor and a low ceiling lined with slender oak battens; its internal topography steps up, via a concrete stair accented with a polished brass handrail, from a lower and grander kitchen and dining area to a living room.

The latter space has a lower ceiling, which creates a sense of compression, but it also has two glass walls that look north and south (opening up views of the lake and of Whistler) and a clerestory “lantern” above.

At the opposite end of the complex, a two-bedroom guest house sits atop a garage, with its own private views to the landscape. 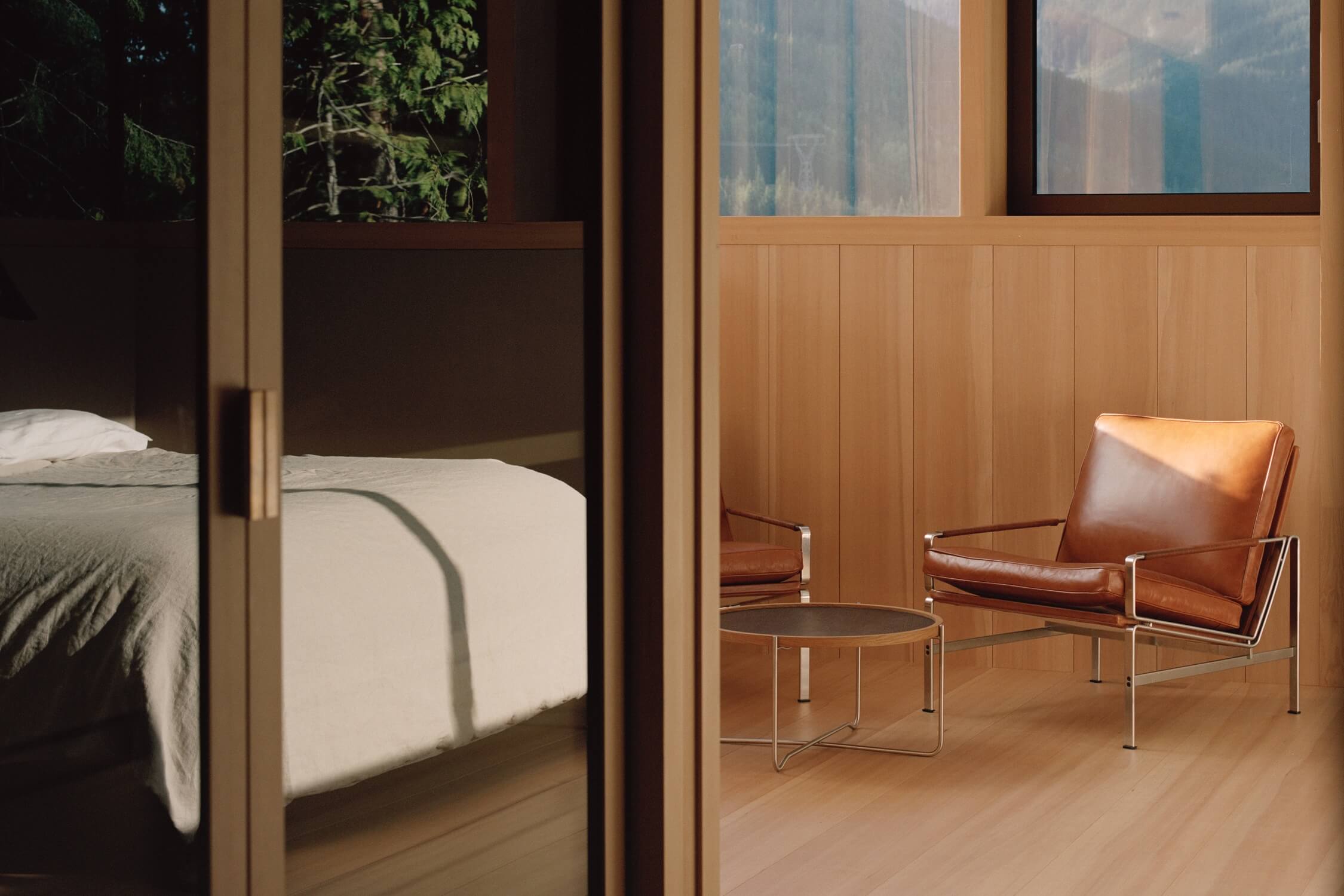 This composition makes the house read as a collection of distinct objects. “Like a piece of sculpture, it asks you to reconsider the context,” says Gort.

The house and guest house are each clad in a mix of board-formed concrete and black-stained wood; the dark wood is hemlock, the same species as the predominant trees on the site, “and it recalls the shadows you get within the evergreen forests there.”

The simple forms and mix of materials are typical of Gort Scott’s work, which fits within a certain brand of English modernism that favours masonry, wood and careful urbanism. 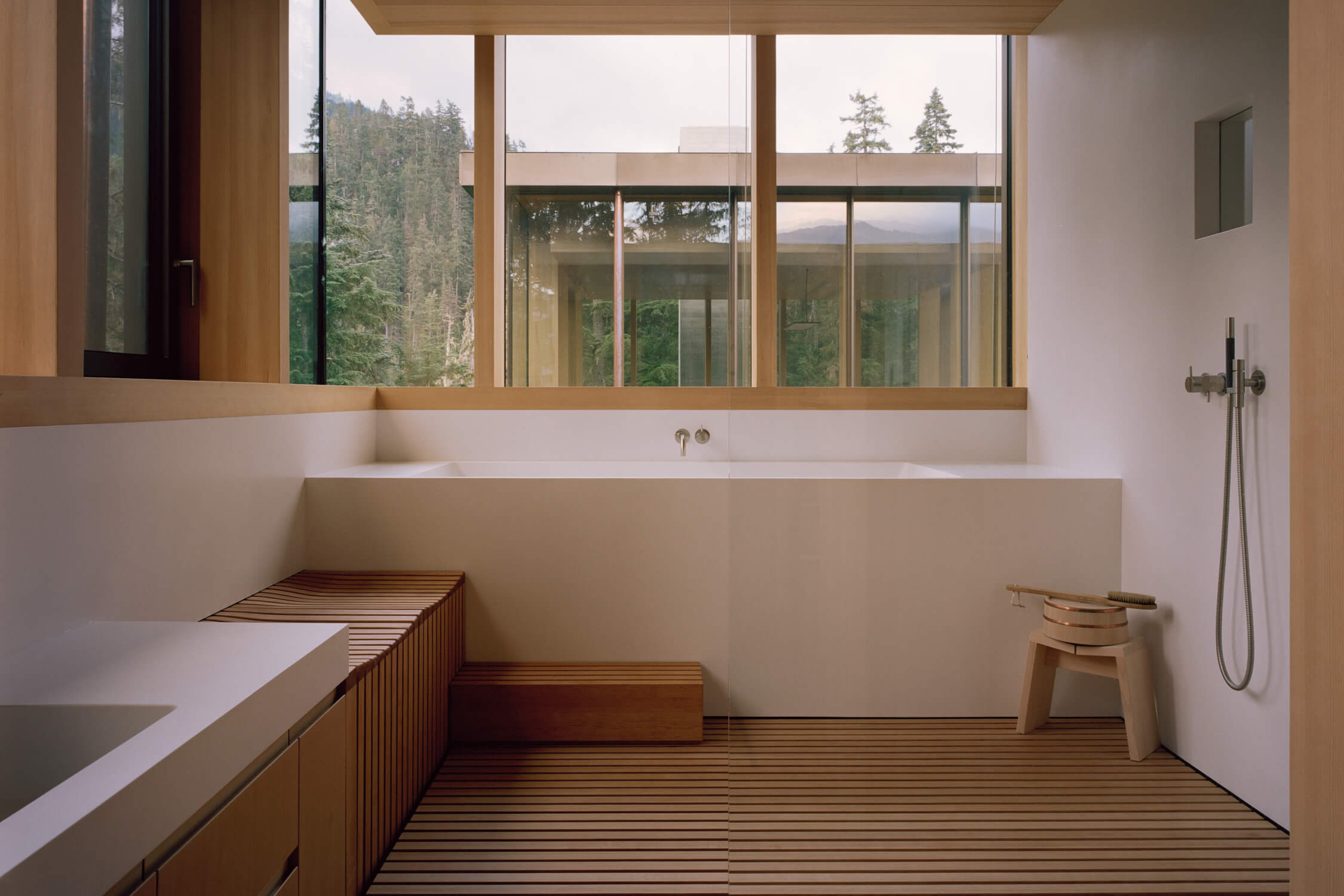 A slatted wood floor and bench anchor an open Asian-style bathroom. Simple lines and a mix of materials are characteristic of Gort Scott’s work.

The firm has built mostly in Britain; Scott has worked at Adjaye Associates and for MVRDV, while Gort taught for seven years at Cambridge University, where the professional partners met.

At The Rock, the architects employed large-scale physical models of the house in order to perfect the materiality, the proportions and the play of light and shadow.

Seen in photographs, the models are incredibly close to the final project. Above all, “scale was incredibly important,” Scott says. “It was important that the building didn’t crush the rock, that it had a deference to the crest of the hill.” 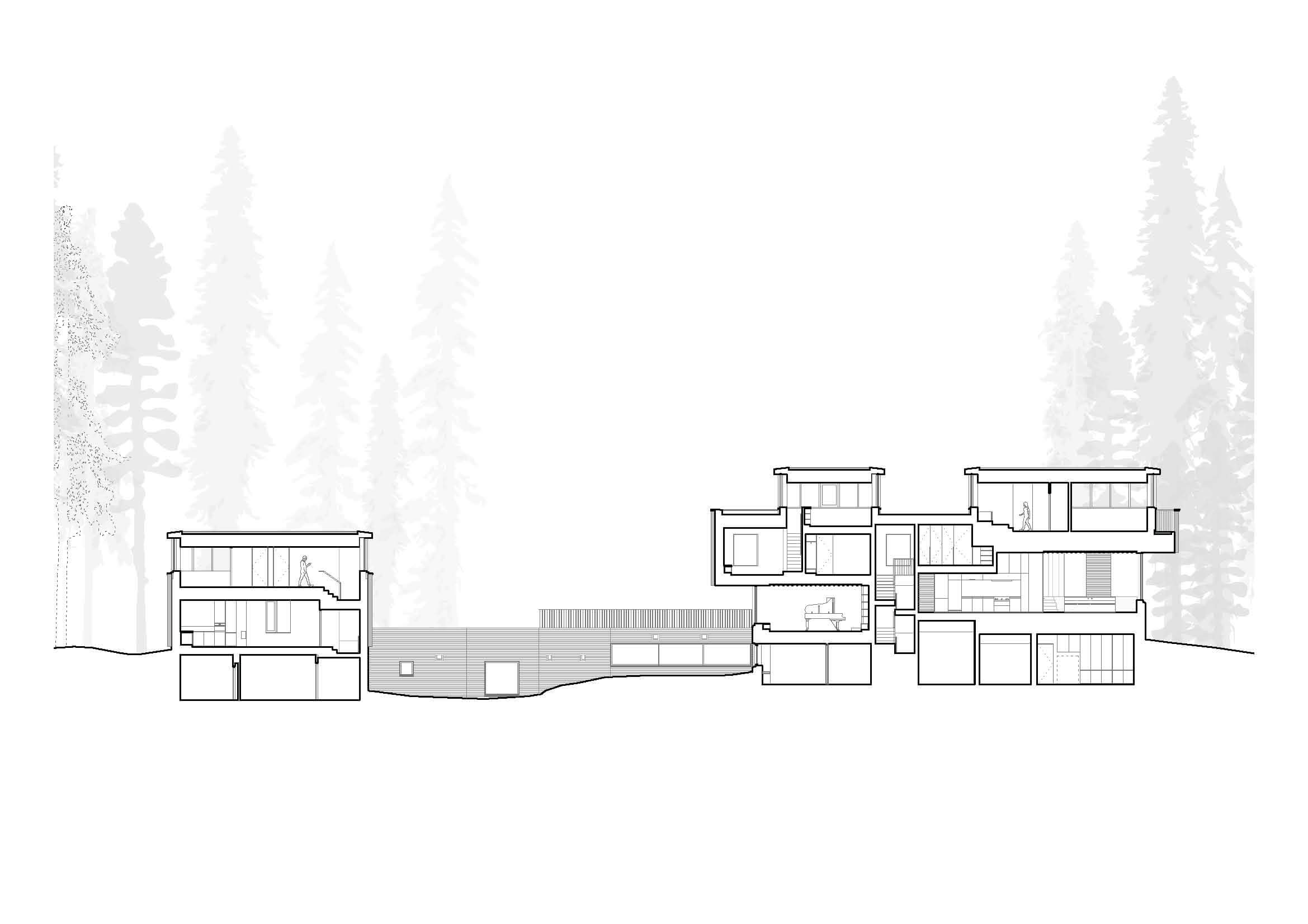 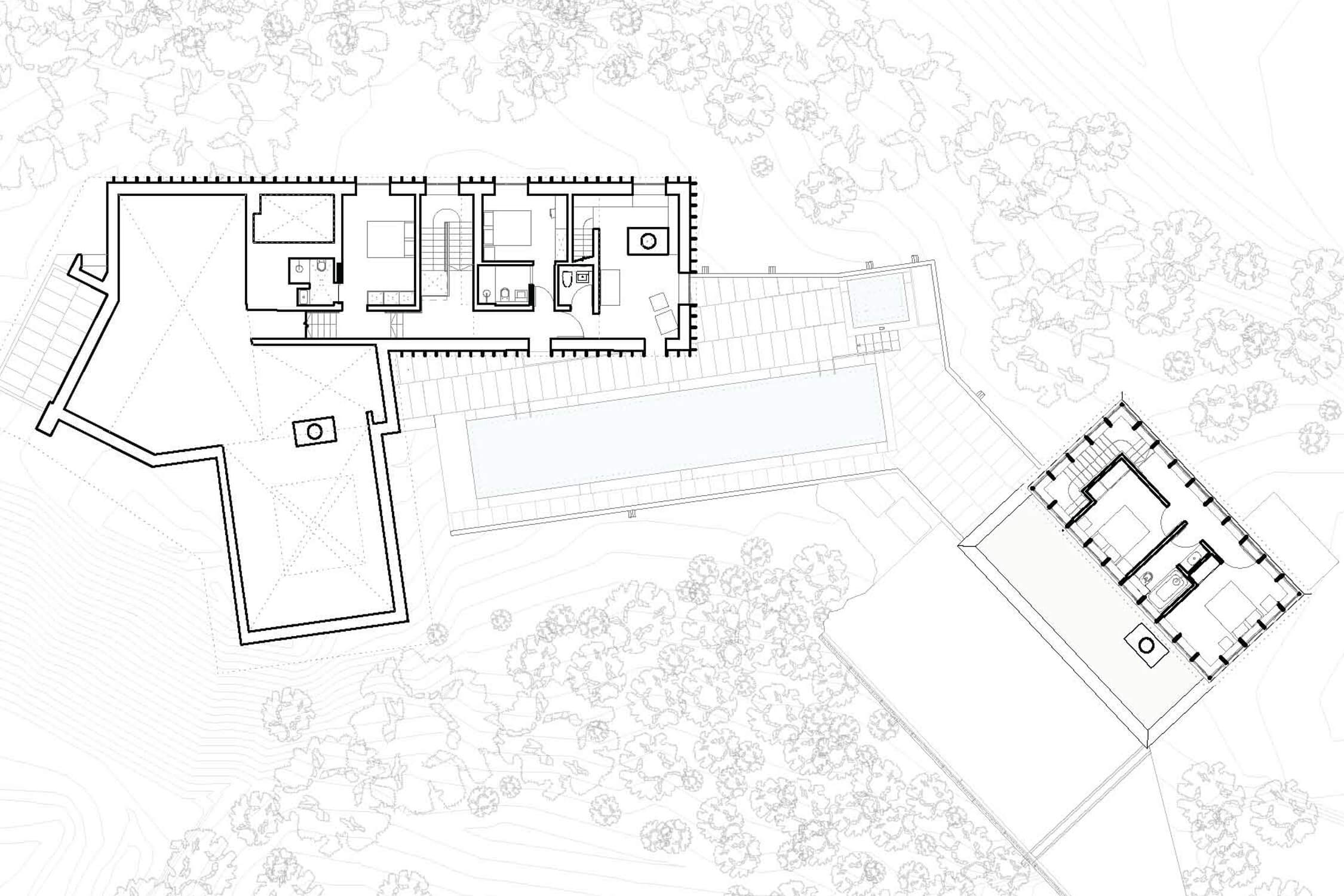 And so it does. According to the client, the complexity and subtlety of the architecture has shaped him as much as the other way around. “Being connected with this project,” he says, “has really introduced me to sustainable building and to sustainability in a broader sense.”

He is now exploring new business and philanthropic efforts related to that theme. The Rock, he notes, “has connected me to the world in a new way.”

Composed of volumes that rise and
fall with their setting, a mountainside
aerie by Gort Scott – the British firm’s
first finished project in North America – is a real architectural cliffhanger.