The Harbin Opera House Opens in China
The cultural monument is set to become a powerful symbol for a city on the rise, and for its designer, Beijing architect Ma Yansong. 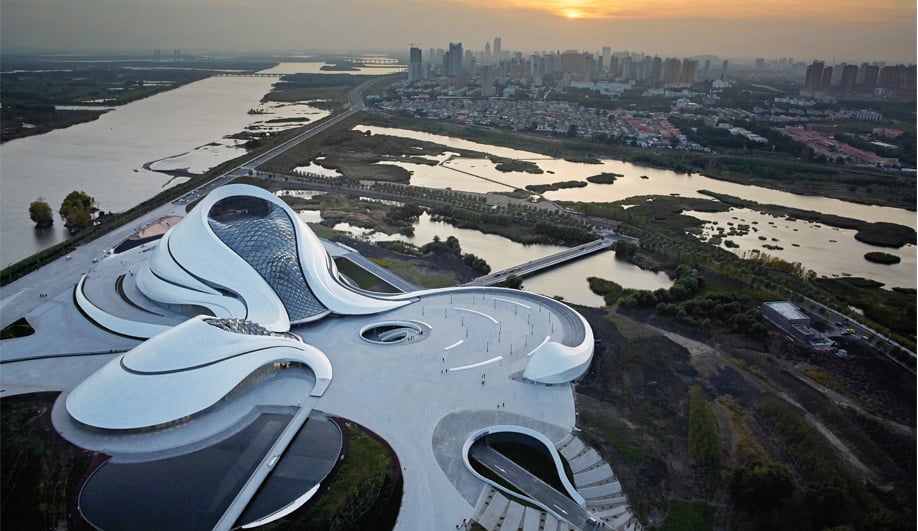 The opera house, an undulating, ­aluminum-clad mass, is located in northern China, where it blends in with the landscape during the winter months. 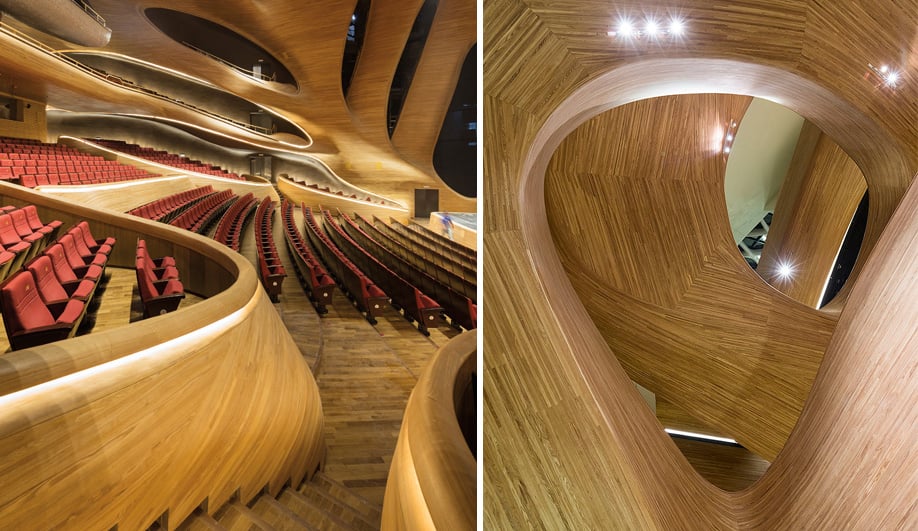 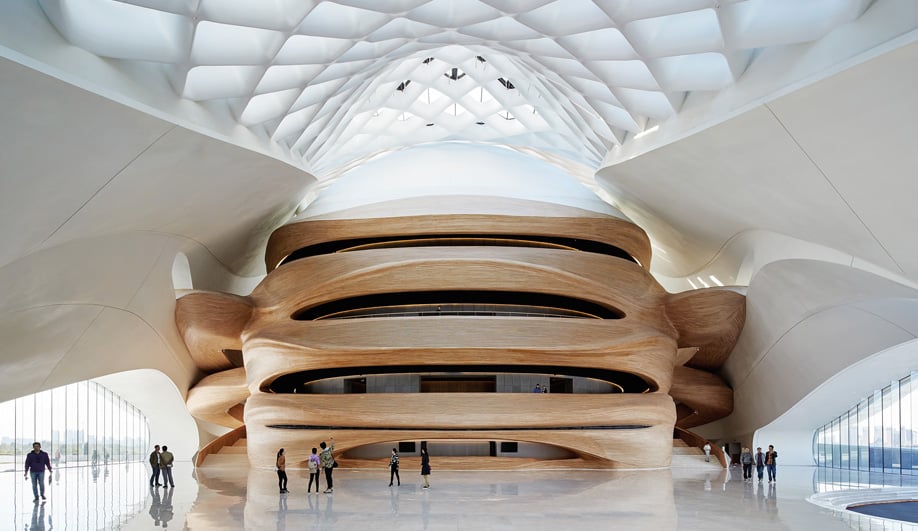 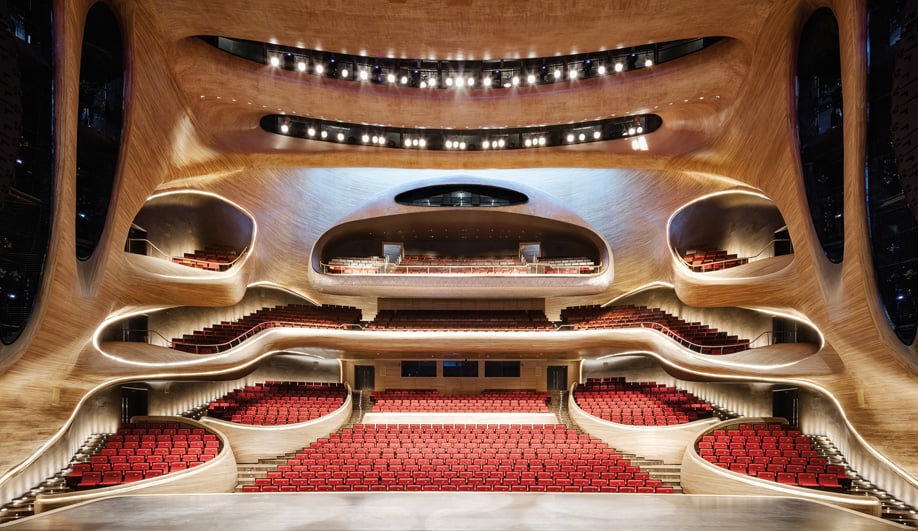 Theatregoers enter through a pristinely polished lobby. Ma wanted the experience of finding your seat to be as theatrical as the performance. 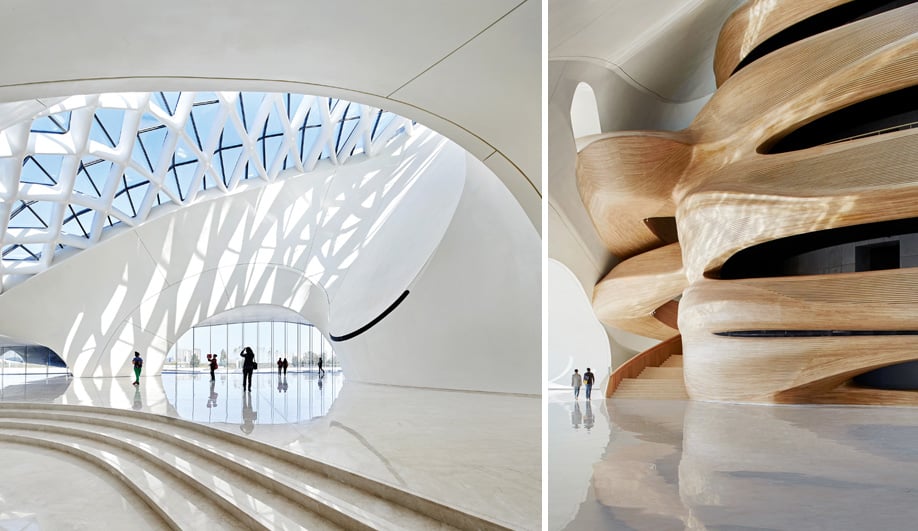 A crystalline glass curtain wall soars above the grand lobby, supported by a light-weight diagrid structure. 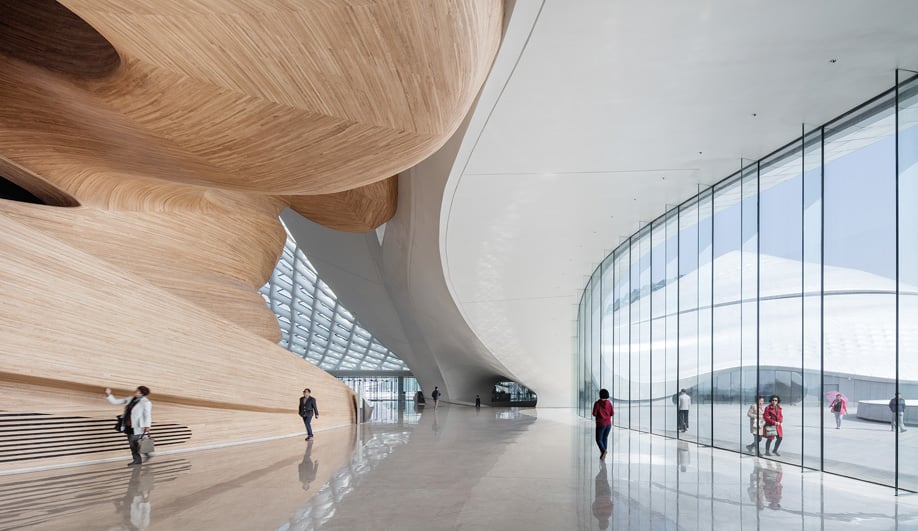 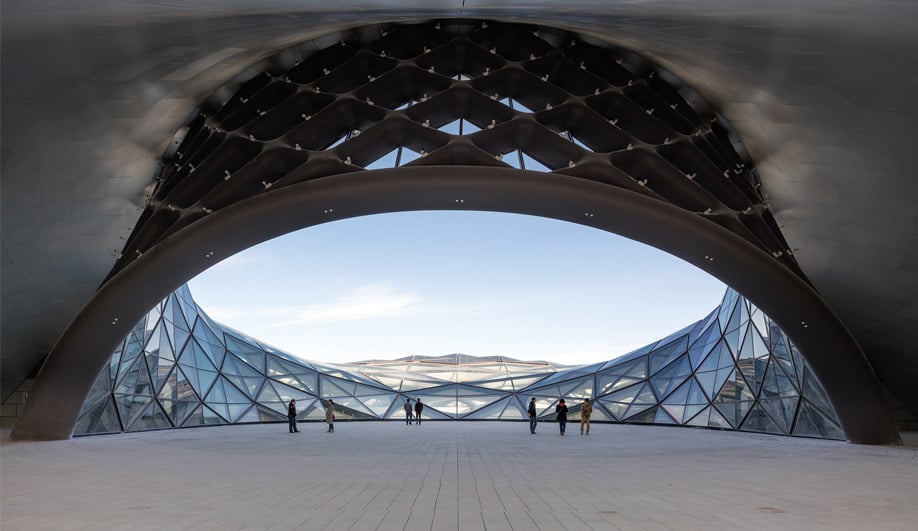 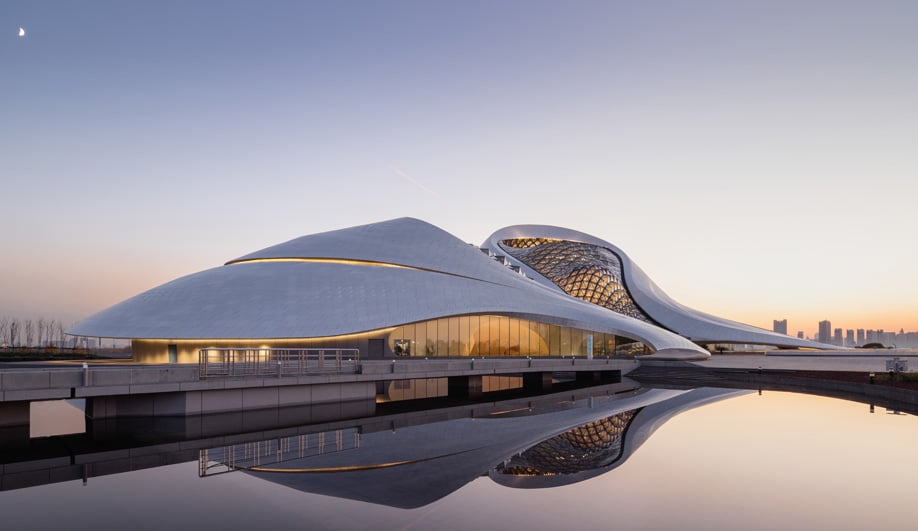 A narrow promenade has been carved out of the curved rooftop, allowing visitors to take in the building and surroundings from above.

The cultural monument is set to become a powerful symbol for a city on the rise, and for its designer, Beijing architect Ma Yansong.

As most Chinese architects are struggling to compete with the popular appeal of foreign architects on native soil, Ma Yansong, principal of MAD Architects, is flourishing. At 40, the Beijing native already has an impressive list of mega-projects behind him, from his first international competition win – the curvaceous twin condo towers outside Toronto, dubbed the Marilyns – to the boulder-like museum located in the Manchurian outpost of Ordos.

All are remarkable structures, but his most ambitious – and accomplished – yet is an opera house and theatre in the northern Chinese city of Harbin. Located in the wetlands to the north of the Songhua River, the swooping twin buildings were planned as the centrepiece of a new city that will complement the metropolis of 10 million on the south bank. Already, government offices have begun to relocate to the area, and a wall of residential and commercial towers will eventually surround the parkland, in a juxtaposition Ma likens to Central Park.

Before winning the Harbin Opera House competition in 2009, his firm was selected to design the China Wood Sculpture Museum, a silvery horizontal tube on the edge of the city’s core. Japanese architect Arata Isozaki has since completed a concert hall for the local symphony orchestra, and Ma may be invited back to build yet another museum.

For now, the 79,000-square-metre complex, open since October 2015, symbolizes a city on the rise. The 1,600-seat opera house is linked to a 400-seat black box theatre via a footbridge that crosses a reflecting pool, which was created from the excavation of earth used to elevate the two buildings. “When I first flew into Harbin, I saw how the river twists and turns, and I thought we should make the buildings into a free-flowing ribbon, or like the gentle hills on the site, which become soft mounds of snow in winter,” explains Ma. “The white structure will then merge with the horizon.”

What makes this building so remarkable is the confidence of its design and the quality of the finishes. Parametrics have liberated architects to create ever more dramatic swooping forms, and early on Ma began to master the CAD-based language of Zaha Hadid, whom he worked for in London for a year after earning a master’s degree at Yale University. He also interned with Peter Eisenman in New York, and is a great admirer of Frank Gehry’s expressive forms.

Like the buildings of Ma’s heroes, Harbin goes well beyond its sen­sational looks. “We wanted to create an interactive environment, not just an architectonic sculpture,” he explains. “Ramps are carved into the exterior so people can take an architectural promenade to the rooftop amphitheatre.” A tilted, four-level glass window lights the soaring all-white lobby, and its pyramidal structure is self-supporting, eliminating the need for any visually obstructing interior columns.

The impeccable craftsmanship of the aluminum skin and the sensuously curved joinery surpasses even Ma’s expectations. In China, architects are often marginalized after the design is done, and complex buildings are routinely rushed to completion, by impatient politicians or inept contractors or both. Hadid’s Guangzhou Opera House, for one, was badly botched, and its cladding panels appear ready to flake off.

Here, the contractor was dedicated, the client patient, and Ma was able to draw on his previous experience of working in Harbin to enlist skilled craftspeople. As a result, every surface is extraordinarily smooth, and the CNC‑milled sections of Manchurian ash that define the concert hall interiors are seamlessly assembled. Ma likens the main auditorium to the inside of a giant instrument that combines warmth, elegance and precision.

In contrast to other Chinese cities, which build trophy museums before having a clear idea of how to use them, Harbin is known for its commitment to serious music with a pre-war tradition of theatregoing. Even before construction began, citizens were asked to vote on the winning design, and they expressed strong support for MAD’s unusual scheme. At the same time, as the massive structure began to take shape, a few spectators asked when the theme park would be ready, mistaking the undulating skeleton for a roller coaster. Another vote of confidence came from the city’s symphony orchestra, which played at the opening and judged the acoustics better than in Isozaki’s music hall.

North America has presented different challenges for Ma. Last year, he opened a satellite office in Los Angeles, to oversee a half-dozen projects now under way in the U.S. and Canada. When his drawings for the Lucas Museum of Narrative Art in Chicago were unveiled, critics likened the proposal to a spaceship that had landed on a beloved waterfront. The comparison seems appropriate, though, given that the building will house Star Wars artifacts. Ma prefers to describe its spacey form to the ancient burial mounds that long preceded the city’s orthogonal grid.

In Beverly Hills, a smaller MAD project is in the works: a five-storey residential complex that paraphrases the local vernacular of small hillside houses and tall hedges with an inner courtyard designed to promote community interaction. Ma remains hard at work with other iconic projects in development for New York and Toronto. Meanwhile, his next ambitious twin tower is under construction in Beijing. Ma, the meteor, is still soaring.