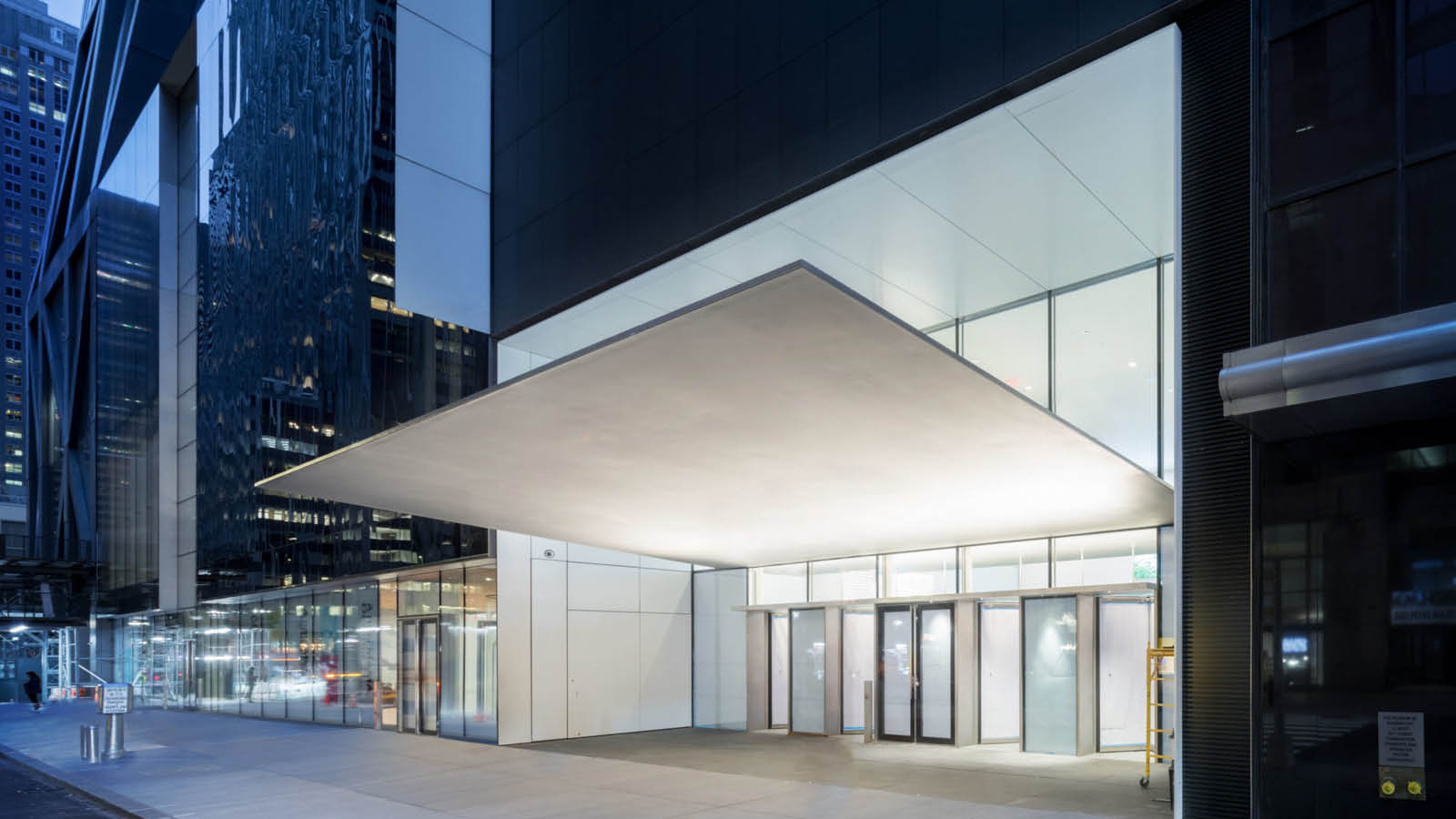 The $450 million renovation and addition looks to re-shape the 90-year-old institution for the 21st century.

Philip Johnson in 1964, Cesar Pelli in 1984, Yoshio Taniguchi in 2004 and now Diller Scofidio + Renfro in 2019: this morning, the latest addition to New York’s historic Museum of Modern Art officially opened its doors to the public. With exacting details and a sharp palette, the result is as much Apple Store as artistic nexus.

Helmed by DS+R in collaboration with Gensler, the $50 million renovation and $400 million expansion provides approximately 165,000 square feet of additional space to the 90-year-old institution to “exhibit significantly more art in new and interdisciplinary ways,” according to MoMA. Renovations to Taniguchi’s linear entrance procession boast a cantilevered stainless steel canopy welcoming visitors to the expanded wood-clad ticketing area and the 5,950 square foot subterranean flagship design store, all visible from 53rd street.

The architects also looked to improve circulation throughout the museum by extending the historic Bauhaus stair, with the added glass and oak Blade stair acting as a “vibrant urban sculpture” to mark the threshold of the expansion. In the galleries above, new and existing spaces are “seamlessly connected” to provide 30% more exhibition space while claiming three floors of Jean Nouvel’s 82-story 53W53 tower next door.

Now at the core of the tetris-like assemblage of spaces and additions is the Marie-Josee and Henry Kravis Studio, a dedicated place for live and experimental programming, that compliments the Paula and James Crown Creativity Lab that delves into the questions raised by the works on view. Noticeably, both spaces –measuring 2,000 square feet and 1,600 square feet respectively – pale in comparison to the shop’s footprint.

Also coinciding with the reopening, MoMA’s curatorial team has rehung their extensive permanent collection to remix as well as reimagine the narratives inherent in the institution’s framing of modernity.

This architectural makeover has not come without controversy. When the initial announcement was made in 2014 that the nearby American Folk Art Museum by Tod Williams & Billie Tsien Architects – still in its relative infancy at 13 years old – would be demolished to make way for the new build, the proposal was met with resistance from not only the architects (who considered DS+R both friends and colleagues) but by critics across the industry.

MoMA has long been a testbed for design, which has often involved losing a few buildings (and friends) along the way. In 1939, four brownstones were cleared for Philip L. Goodwin and Edward Durrell Stone flagship building. Entries by Eero Saarinen and Charles Eames into the 1941 Organic Design in Home Furnishings exhibition lead some of the most iconic works of the past century. This was soon followed by Marcel Breuer’s installation of a full-scale expandable residence in the Museum’s courtyard in 1949 and R. Buckminster Fuller’s rapidly deployable housing prototypes in the years following – both of which were ultimately dissembled.

Now five years since the initial announcement, DS+R’s expansion joins this history of architectural experimentation in asking how an institution like MoMA can support growth, creeping ever closer to Sixth avenue, in its dense urban context? And, what a museum founded on the ethos of the 20th century looks like in the early years of the 21st, particularly as the institution attempts to reconcile the voices included and those excluded from its genealogy.

While the big questions hang in the background, the museums hums with the business of creativity. Whatever else MoMA generates, revenue is at the forefront. With a sleek expansion – and a store that rivals the footprint of a number of galleries – the museum finally has the space to admit this.

The $450 million renovation and addition looks to re-shape the 90-year-old institution for the 21st century.