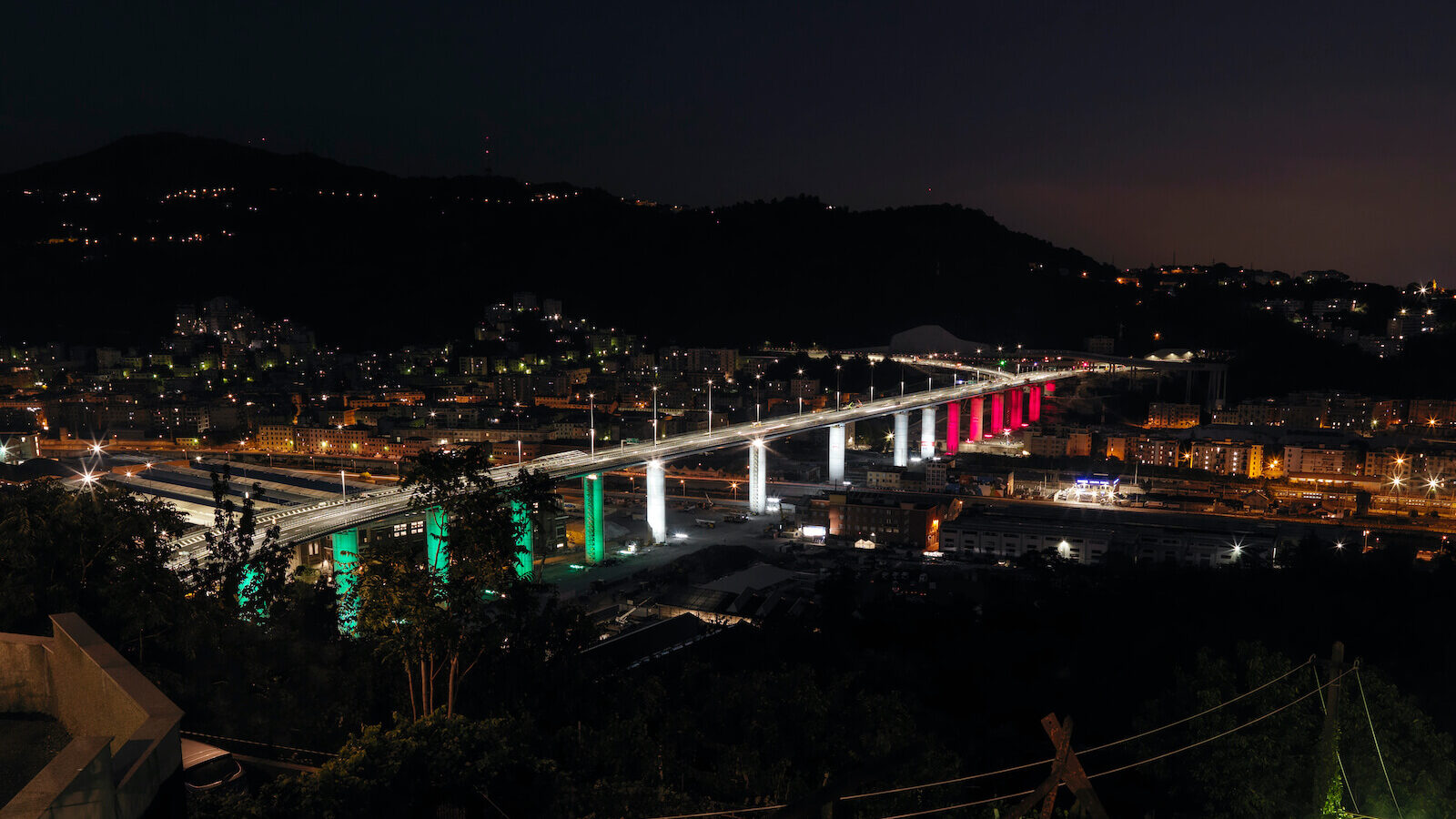 The ephemeral, 1,066-metre-long viaduct replaces a sixties-era one that collapsed two years ago.

To call the Genova-San Giorgio Bridge — just inaugurated in Italy with considerable fanfare and emotion — a remarkable piece of infrastructure is a decided understatement.

Replacing a span that collapsed in August 2018, killing 43 people and displacing hundreds, it was quickly adopted as a pet project by legendary architect Renzo Piano, a Genoese native, in a desire to help heal his wounded hometown. The fact that it is up and running, in a notoriously bureaucratic country, less than two years after the disaster is nothing short of miraculous. Even its evocation of a seafaring vessel is unusually metaphoric, suggesting a new course for the Italian ship of state, even as the families of victims still clamour for accountability.

“Following the collapse of the Morandi Bridge on August 14, 2018,” Renzo Piano Building Workshop said this week in a statement, “its rapid reconstruction aims to become a model for the renovation and adaptation of Italian infrastructure with a high social, economic and strategic significance.”

Renzo Piano’s Masterful Light Touch
Now in his eighties, the legendary architect is as vital and quixotic as ever, taking pride in the fact that none of his projects comes close to bearing an obvious stamp.
Read More

In an interview with Azure this spring, Piano himself said of the project: “We are all very proud of it. First, because it [was] built in one year, which is amazing. And second, because when you make a public building — a bridge, a library, a museum, a school — you feel like you are doing something special, something important for the community.”

Its freighted origins aside, the Viadotto Genova-San-Giorgio, which cost approximately €187 million to construct and opens fully to the public this week, is indeed something unique, filling the void left by its predecessor not in a sensational way, but with reassurance and understatement in equal proportion.

Stretching some 1,066 metres over the Polcevera River and Genoa’s largely industrial Sampierdarena district, the new bridge, which Italian President Sergio Mattarella inaugurated on August 3 with a ceremonial first crossing, rests on 18 slender piers made of reinforced concrete, their elliptical shapes having no rounded corners and therefore a subtler visual impact. 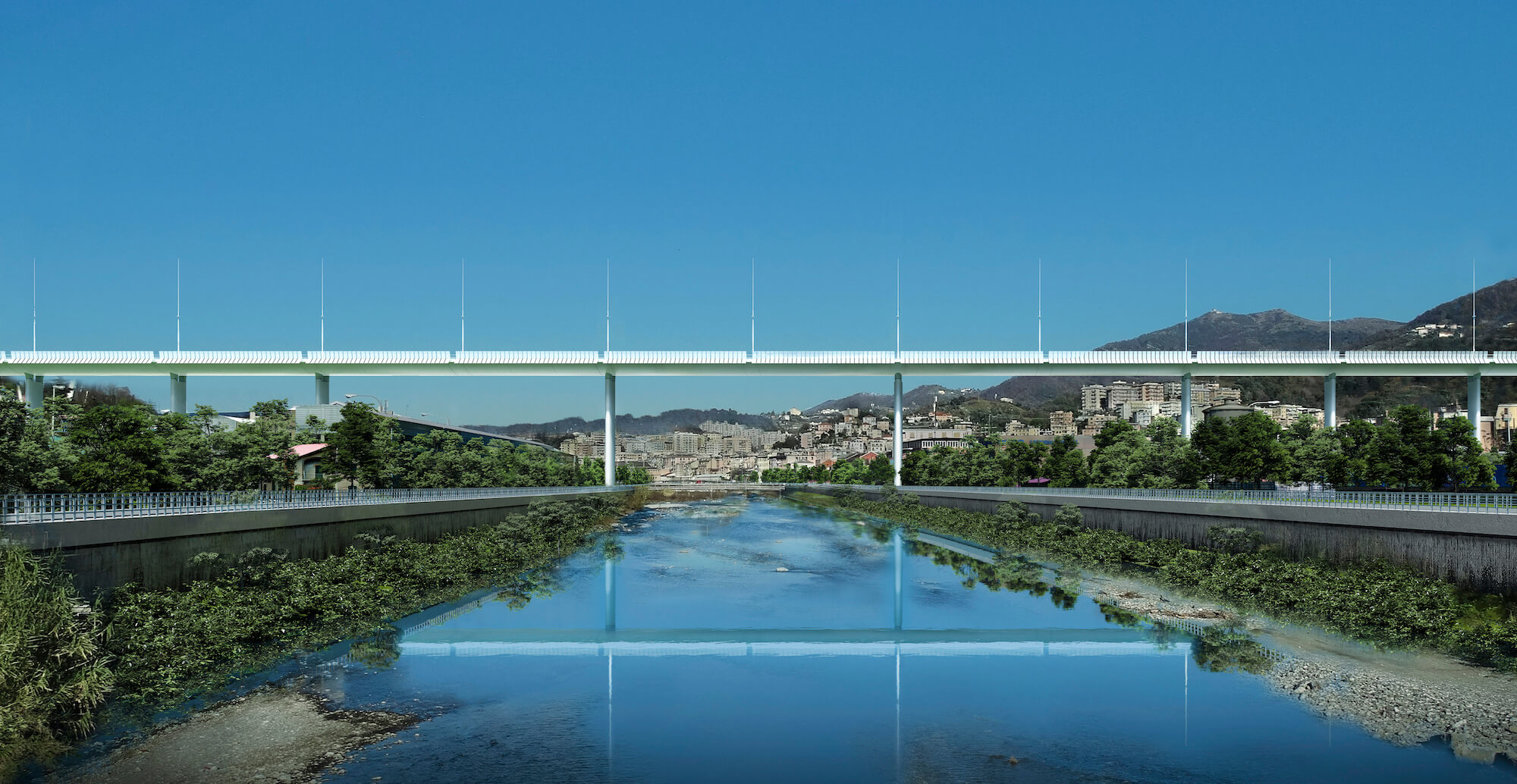 The steel-and-concrete deck of the bridge, which holds four traffic lanes and recalls the hull of a ship, is “isolated” from the piers by pairs of short support structures, which allow it to “breathe” without compromising strength or stability. “The elements supporting the deck on the piers,” says RPBW, “represent the point where all the strains of the structure converge, are transmitted to the foundations and, consequently, to the ground.”

Lining each side of the bridge, which curves markedly at one end, are series of bright white “ribs” arranged with a pitch of one and a half metres. Made of transparent glass, a two-and-a-half-metre-high barrier also hugs each edge of the span, protecting technicians using the walkway above the ribs from winds and falls and contributing to the superstructure’s “visual permeability.”

Finally, photovoltaic panels placed on the edges of the deck collect enough sunlight to produce “the energy necessary for the night-and-day operation” of the entire span, including lighting, signals and a whole host of “complex internal sensors consisting of accelerometers, extensometers, velocimeters, inclinometers and detectors for joint expansion and differential displacements.”

“The bridge,” says RPBW, “is designed as an ‘intelligent instrument,’ capable of independently providing data on the behaviour of all of its parts, as well as information on its operating status. The use of this system will allow for the creation of a database that can be continuously monitored and studied, while also laying the foundations for the future design of infrastructure of the same type.”

Another implied goal, of course, is the prevention of the kind of disaster that necessitated the new structure in the first place. When the sixties-era Morandi Bridge collapsed last year, Italians’ well-earned pride in their design and technical ingenuity took a profound hit, with many still looking for answers.

But even as families continue to grieve and as the previous bridge’s management continues to be investigated, its gleaming and sophisticated replacement, a triumph for Italy on a number of levels, should go a long way toward restoring some of that pride.

The ephemeral, 1,066-metre-long viaduct replaces a sixties-era one that collapsed two years ago.