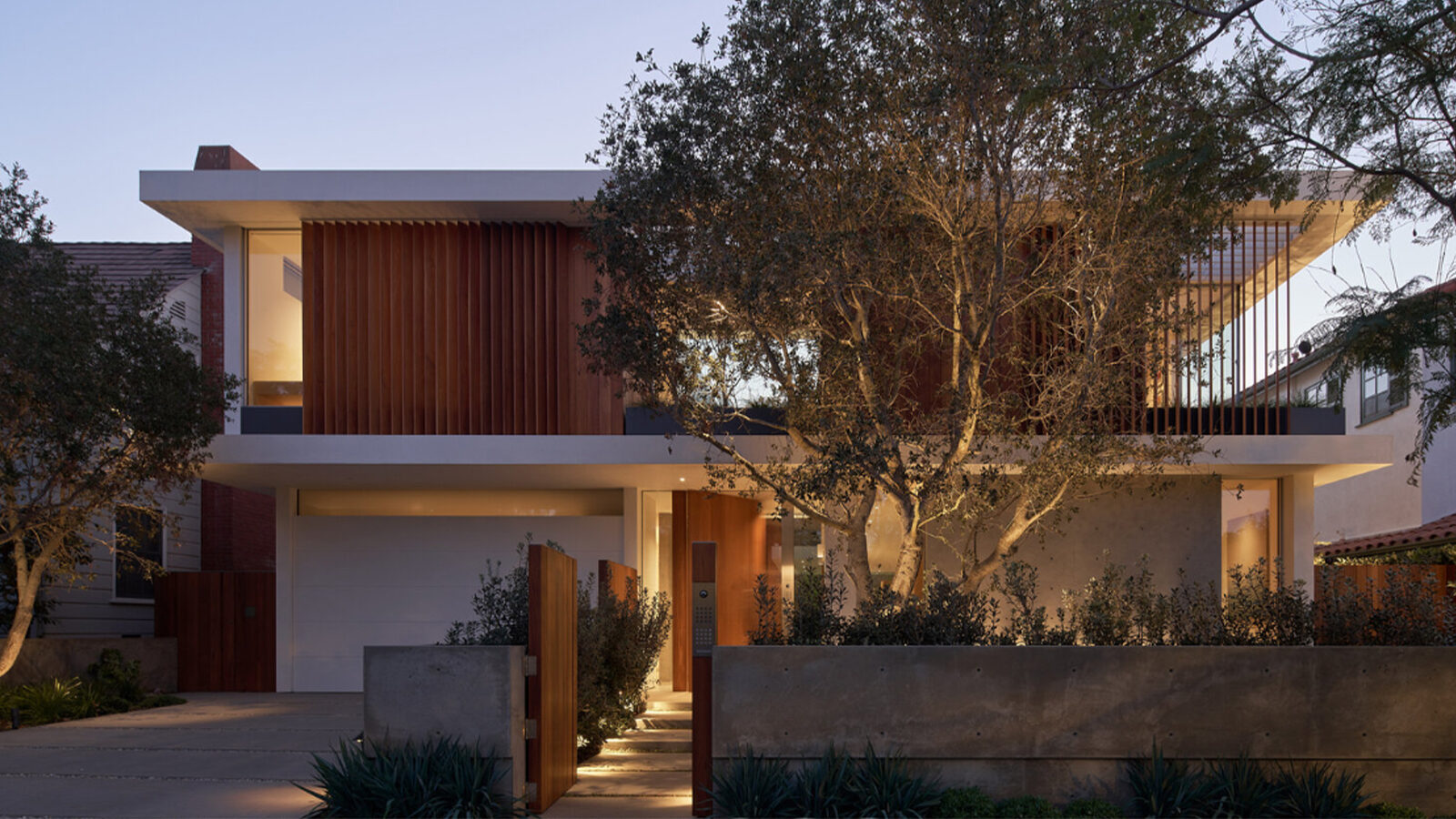 “There must be quite a few things a hot bath won’t cure,” Sylvia Plath once wrote, “but I don’t know many of them.” It’s a sentiment shared by many; therapeutic bathing has been woven into cultures and customs for centuries. While rituals surrounding the act of bathing can range from public to deeply personal, almost all involve an atmosphere of relaxation and healing.

For some, that involves candles and soft music. For architect David Montalba, it meant creating a space dedicated solely to the physical tub — a custom Japanese-style teak soaker made in Alaska — and with a strong connection to nature.

Situated in a courtyard on the second floor of Montalba’s recently completed three-storey new-build in Santa Monica, California, the bathtub is open to the sky and flanked by floor-to-ceiling glass walls, a set-up that infuses the three-by-3.5-square-metre space with natural light and, as Montalba puts it, serves as “a moment of silence in the architecture of the house.” 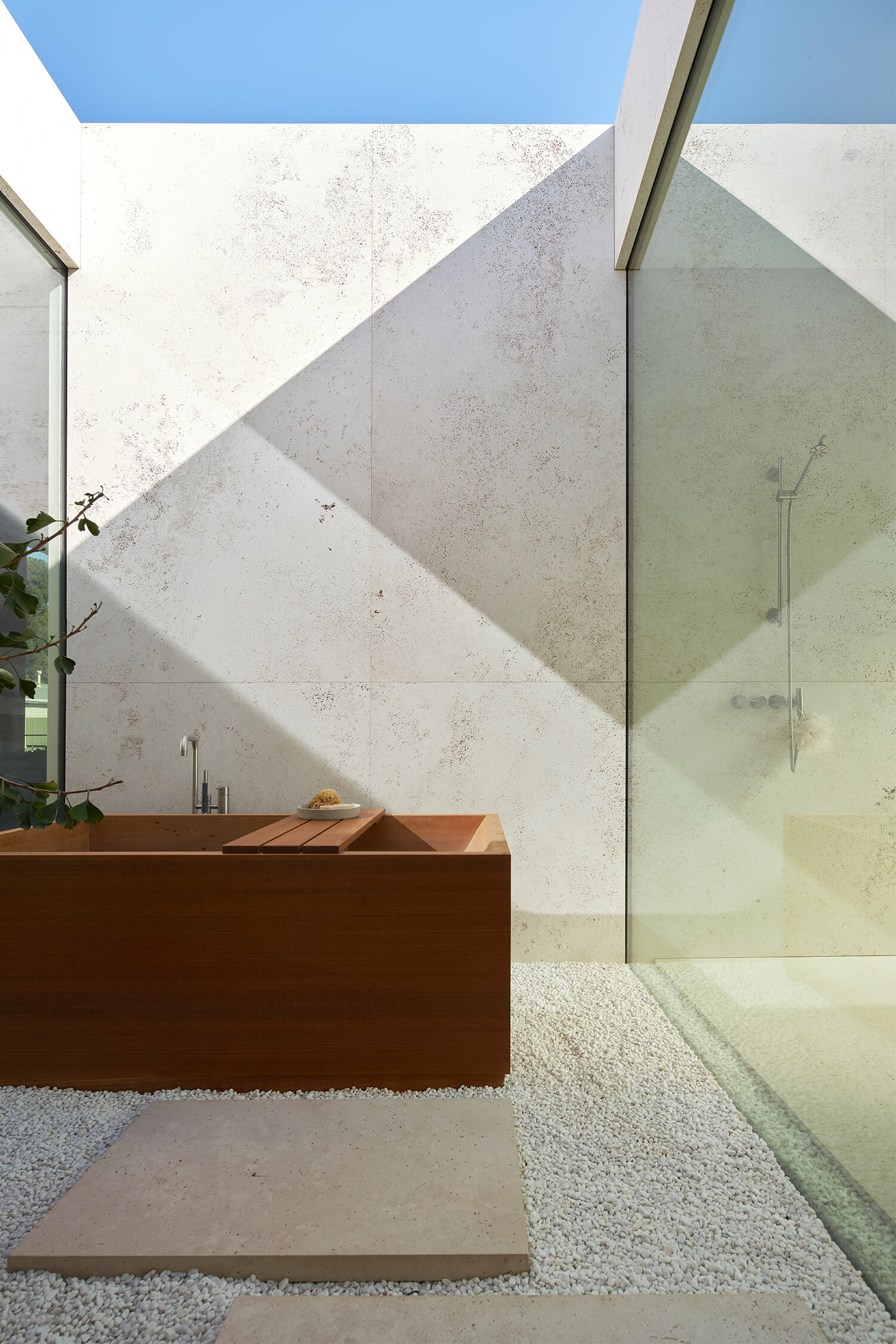 2Used throughout, Italian travertine forms a cohesive backdrop while two walls of glass at either end enhance light flow.

3Fabricated in Alaska, the custom teak soaker is positioned al fresco to take advantage of the temperate California weather.

But there is practicality mixed in with that poetry: placing the bathtub outside the confines of the house freed up valuable floor space without interrupting the strong sense of movement and flow throughout it.

As an architect who appreciates outdoor spaces as much as indoor ones, Montalba wanted to “emphasize the notion of landscaping piercing the interior of the house.” To that end, large-scale slabs of Italian travertine line the back wall and form a path to the tub, which is surrounded by pea gravel. 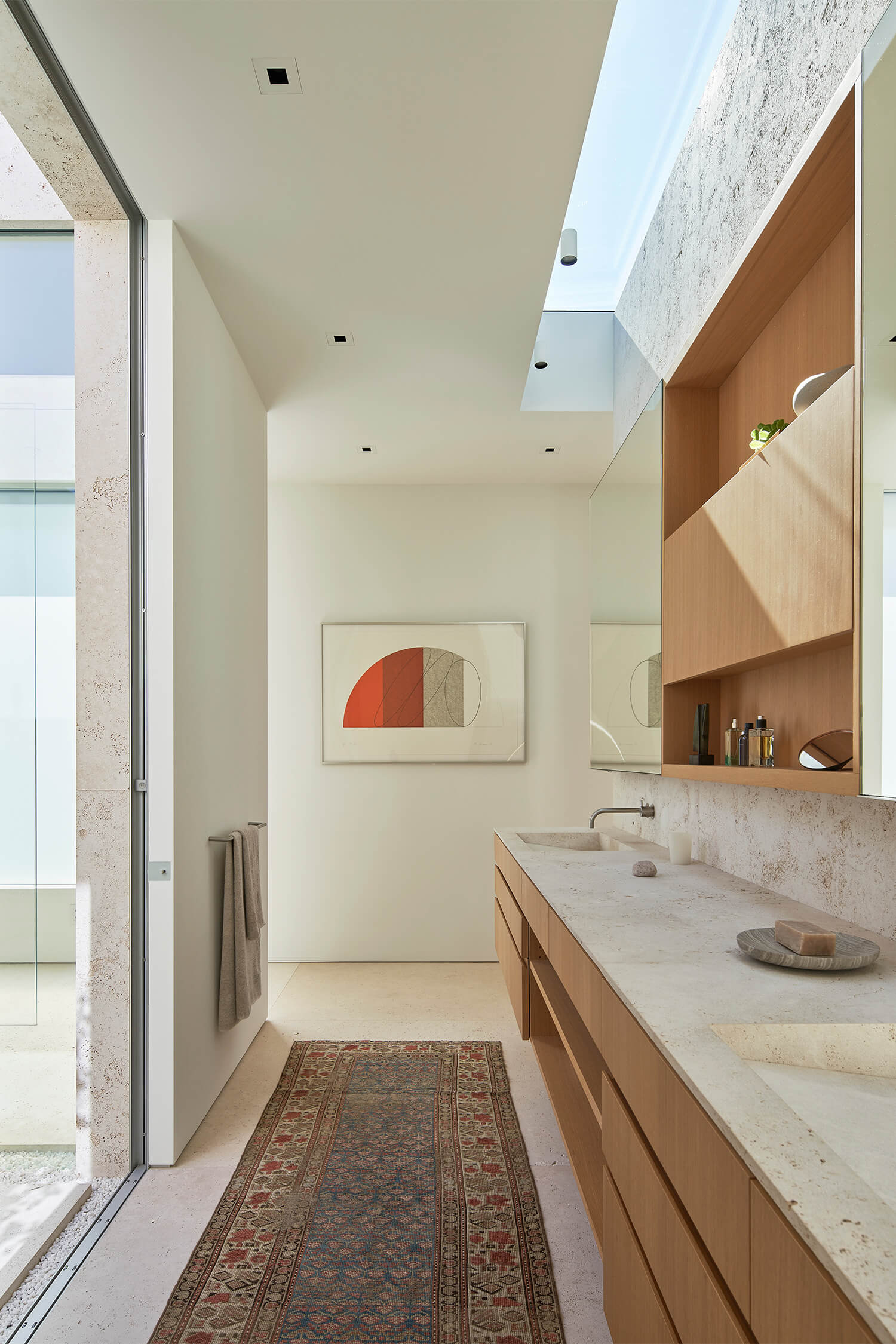 The upper portion of the vanity was recessed by nine centimetres so as not to intrude too far into the space, while the 1.8-metre-wide mirror lifts up slightly to grant access to concealed storage.

The stone — chosen to impart subtle texture — is also used for the walls and sloped floor of the adjacent shower room (where a strip of pea gravel acts as drainage) and, in the internal hallway-like portion of the bathroom, as a 3.76-metre-long countertop with two hewn sinks on a white oak vanity.

Also inside, a slender skylight contributes natural light (a retractable blind can control the level) and works to create the illusion that the 2.9-metre ceiling is even higher. To further establish this as a serene space, Montalba eschewed hardware on the built-ins, seams in the mirrors and other superfluous details to “avoid visual disruption while keeping the ultimate functionality.”