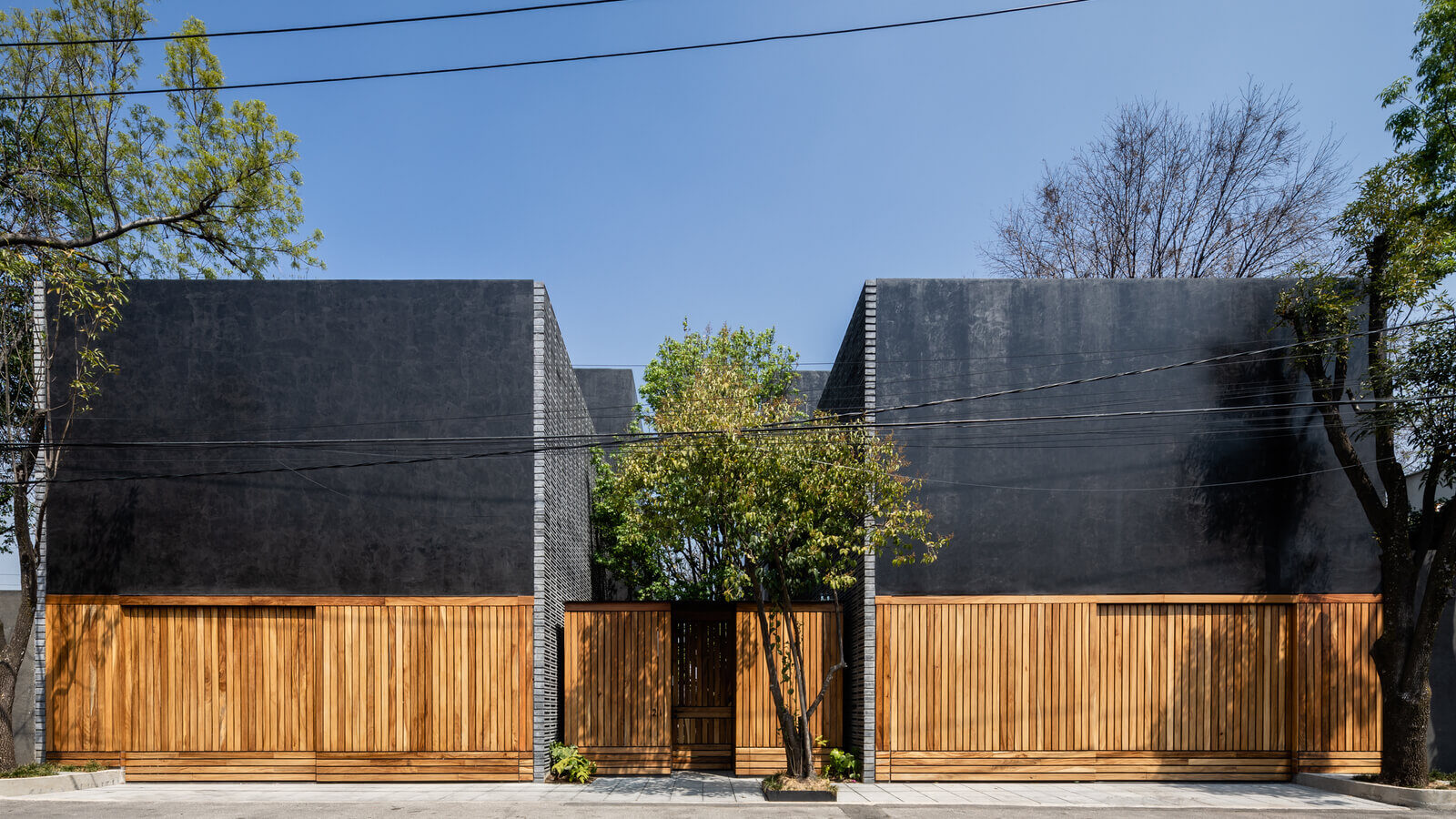 Behind Carrizal’s monolithic facades lies a wealth of enticing contrasts, from a verdant “communal foyer” to airy minimalist interiors.

A fixation on Mexico’s built heritage — the artisanal and vernacular construction techniques, the masterful local interpretations of modernism in the 20th century — has been a common thread in the work of many of the country’s top contemporary architecture firms. As noble as this attention to tradition may be, however, it isn’t especially alluring to Pablo Pérez Palacios, founder and director of Mexico City-based PPAA. “I certainly appreciate the intention of reinterpreting a local style,” says the architect. “But to me, it’s far more interesting to design based on concepts, rather than historical references.”

A bevy of sumptuous textures abound in the recently completed Carrizal residences.

That’s exactly what Pérez Palacios has done with his studio’s latest project, Carrizal, a 2,022-square-metre residential complex in a southern part of the capital. Consisting of eight single family dwellings — each of which contains three bedrooms and a studio as well as living and dining areas and ample kitchens — the complex sits behind an understated facade concealing one of Carrizal’s defining features: a verdant interior corridor that serves as a common area for the occupants of the homes. 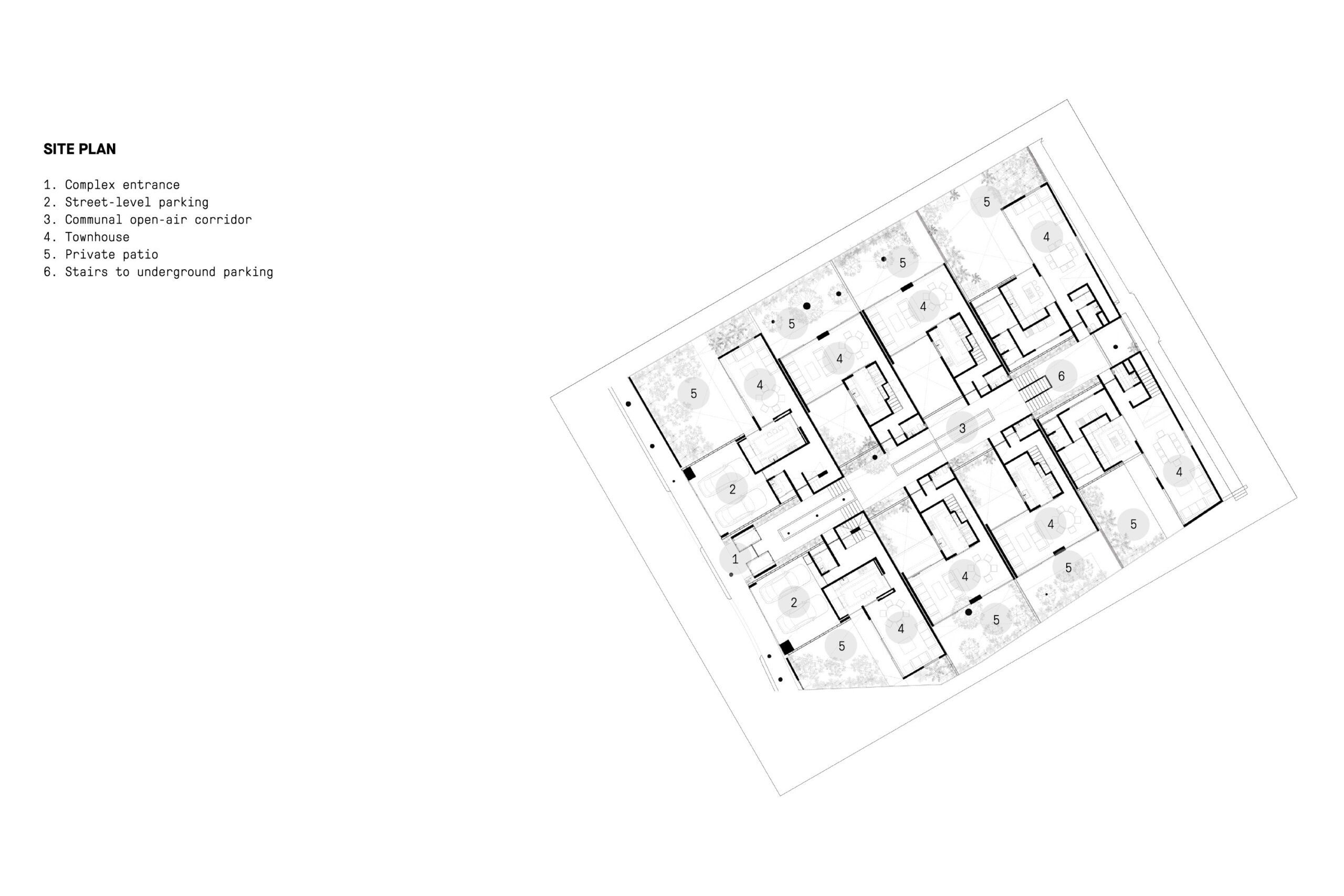 Realizing this communal foyer, however, was no simple feat. The client, a real estate developer, first had to be sold on the idea of forgoing above-ground parking spaces for the six houses not facing the street. But for Pérez Palacios, it was an objective worth insisting on.

In the openair corridor that bisects the Carrizal townhouse complex in Mexico’s capital, Pérez Palacios Arquitectos Asociados sought to replicate the feeling of being in nature through voids, materials, light and shadows.

The firm worked closely with its construction company, Constructora Tuca, to realize the atmospheric eight-home project.

“On the one hand, it avoids the constant noise of the neighbours’ cars coming and going,” he says. “And on the other, it is a statement of values: Instead of a garage, you have gardens and terraces that prioritize the user experience.” Since the site’s topography allowed for the construction of a subterranean parking garage, residents now have the luxury of passing through this private oasis as they enter and exit their houses. “It is impossible to fully replicate the feeling of being in nature,” says Pérez Palacios, “but that is the atmosphere we aimed to create here, through voids, materials, light and shadows.”

A deft balancing of plaster, wood and other surfacing offsets the boxy rigour of the complex, which houses just two streetside garages (the rest of the parking is below grade).

In particular, latticework screens made from prefabricated concrete blocks allow natural sunlight and ventilation into the corridor while maintaining the privacy of each home; cumaru wood accents, meanwhile, complement the greenery.

As Pablo Pérez Palacios notes, the glossy black stucco that was hand applied to great swathes of Carrizal’s exterior “comes alive” when the sun hits it. It was chosen in part as a rejoinder to contemporary white box architecture.

Covered in glossy black stucco, the surrounding boxy volumes offer a striking contrast to the screens’ permeability. Pérez Palacios chose the dark hue partly in defiance of contemporary “white box” architecture and partly to add texture to the austere surfacing. “Black has many shades to it, and when the sun hits it, it comes alive,” he says. “The stucco was applied by hand, so you can make out each stroke, which gives the building the warm, human look of something that doesn’t appear to be prefab.”

The concrete latticework that punctuates outdoor areas provides both privacy and translucency.

The dark shades and varied textures of Carrizal’s exterior areas also contrast the homes’ interiors — airy, strikingly minimal spaces resembling white canvases. “That was what we were after within the interiors,” says Pérez Palacios, “a liberating sense, a dialogue between opposites.”  Despite its hard edges and geometric rigour, the dichotomies embodied by Carrizal — between inside and outside, public and private — also have an organic quality. “It’s almost like cutting a fruit,” concludes the architect. “Behind a hard outer shell, you find something much more open, neutral and soft.”

Behind Carrizal’s monolithic facades lies a wealth of enticing contrasts, from a verdant “communal foyer” to airy minimalist interiors.