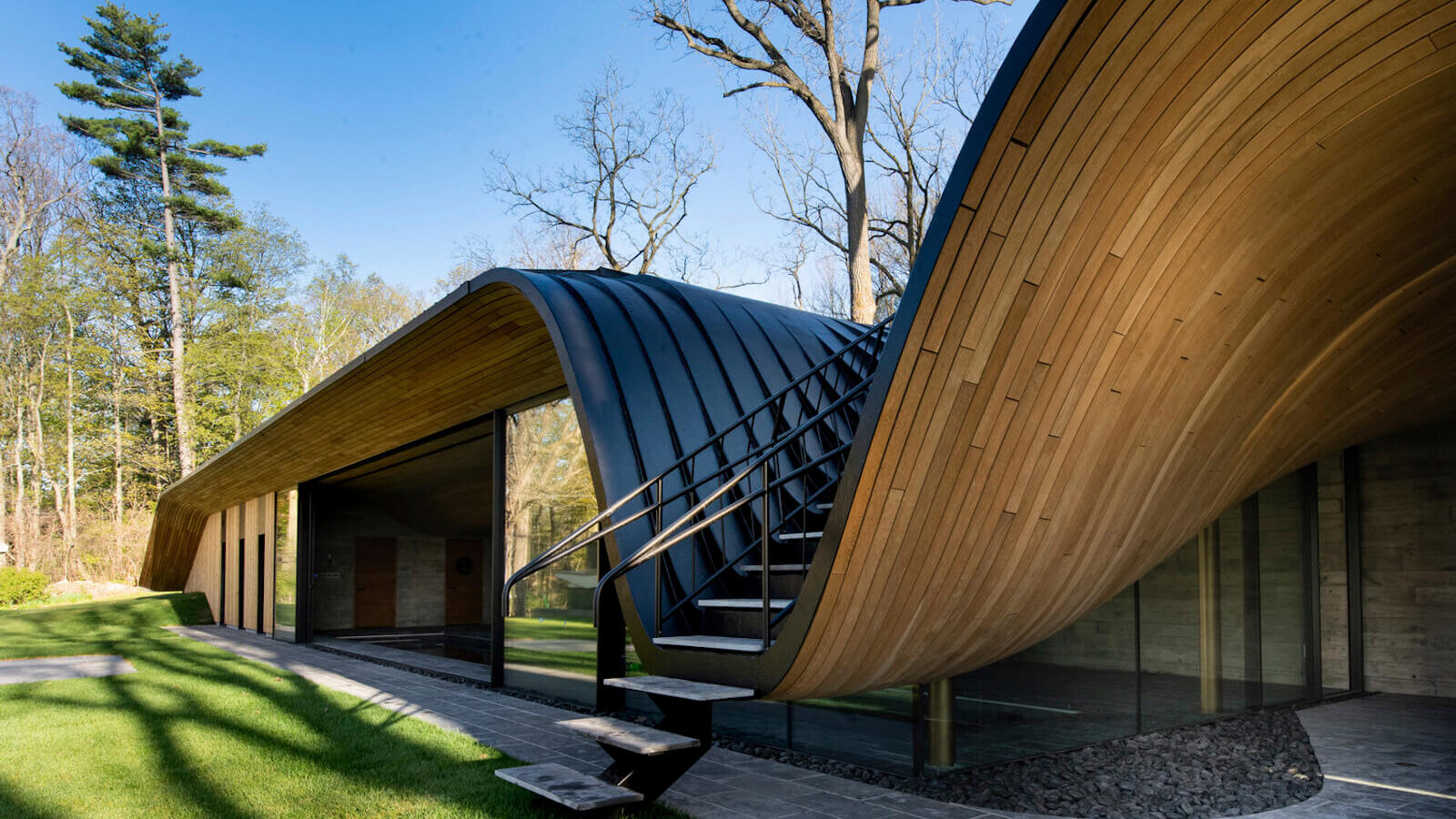 Partisans Sculpts a Curvaceous House on a Hill

On a historic property along the Niagara Escarpment in Ontario, the Toronto architecture firm builds a guest residence, the Fold House, that looks boldly to the future.

The property at the bend in the road, high on a ridge in Southern Ontario, displays layers and layers of history. Although the original house — with its lookout tower, its outbuildings and its striking historic features (notably, a porte-cochère and a metal and glass extension overlooking an astonishing ginkgo tree) — date back as far as the 1830s, they have been in a steady state of transformation and expansion ever since. There is even a tumbledown water tower hiding in plain sight, a relic of a gravity-fed irrigation system once used to keep the rolling lawns and gardens lush year-round.

The net effect is of a mathematical equation over four hectares: stone plus wood plus stucco plus metal — an architectural palimpsest, always showing its work. So when it came time to rebuild the guest cottage — including an indoor pool — following an electrical fire in 2017, the question wasn’t how to stay within a particular vernacular, but how to chart yet another course. 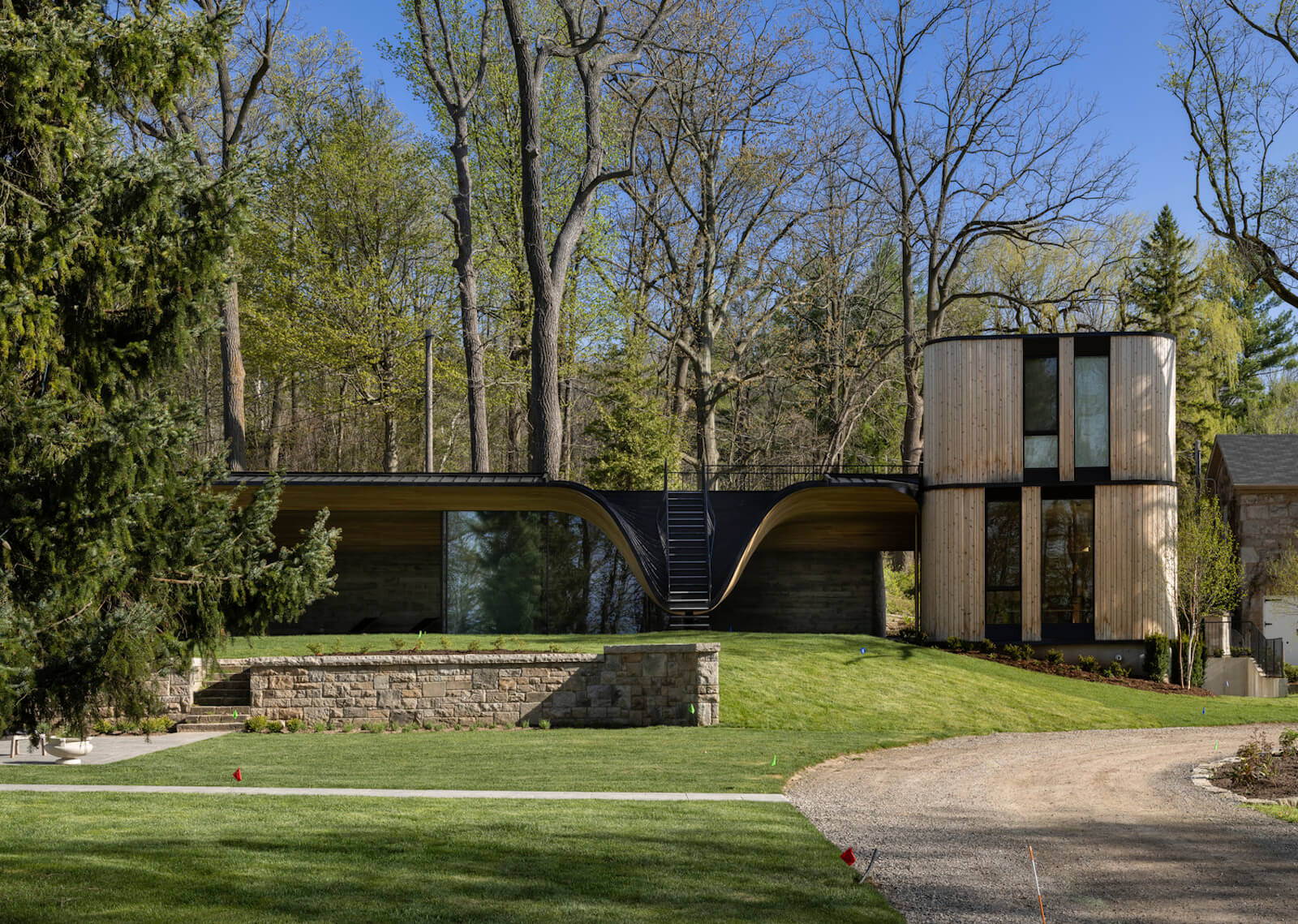 The residence consists of a pool and sauna on one side and a two-storey guest house clad in varying widths of cedar siding on the other.

“The idea was to continue the contours of the hill and have the pool and the glass reflect the original house like a mirror,” says Partisans architect and co-founder Alex Josephson of the resulting building, the Toronto firm’s first from-the-ground-up residential commission, which it designed for a family of five. “It’s a piece of land art.” 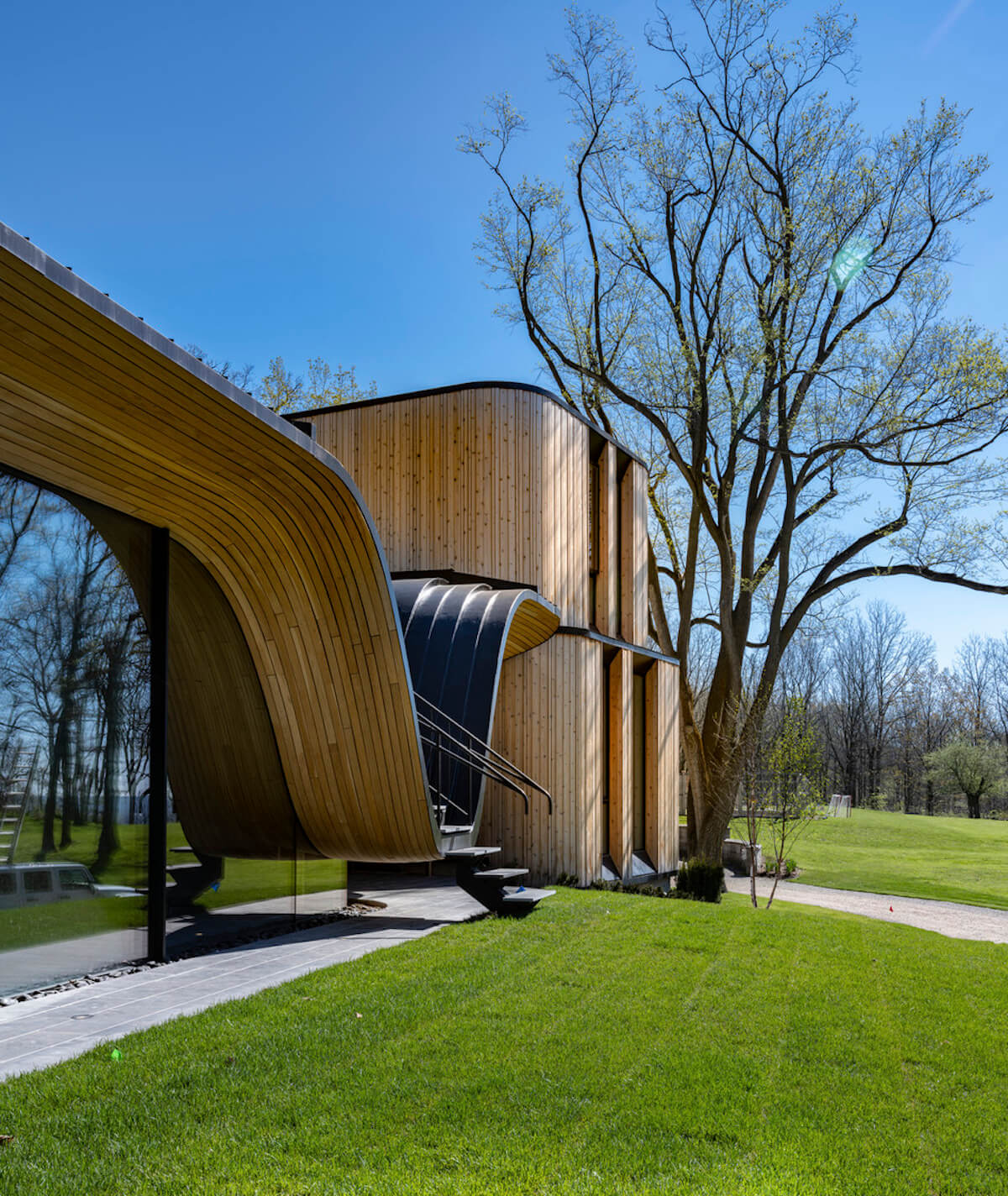 From the north side, the building is largely invisible, its green roof taking on the appearance of a terraced garden bed built into the gentle slope; from the south side, it’s a long glass pavilion with a roofline that dips and curves like a slip fold in sedimentary rock. At its lowest point, the roof nearly reaches the ground to allow an open-tread staircase to ascend to its top while simultaneously divvying up the 415-square-metre structure into its assigned tasks: a pool and sauna on one side and a two-storey guest house clad in varying widths of cedar siding on the other. 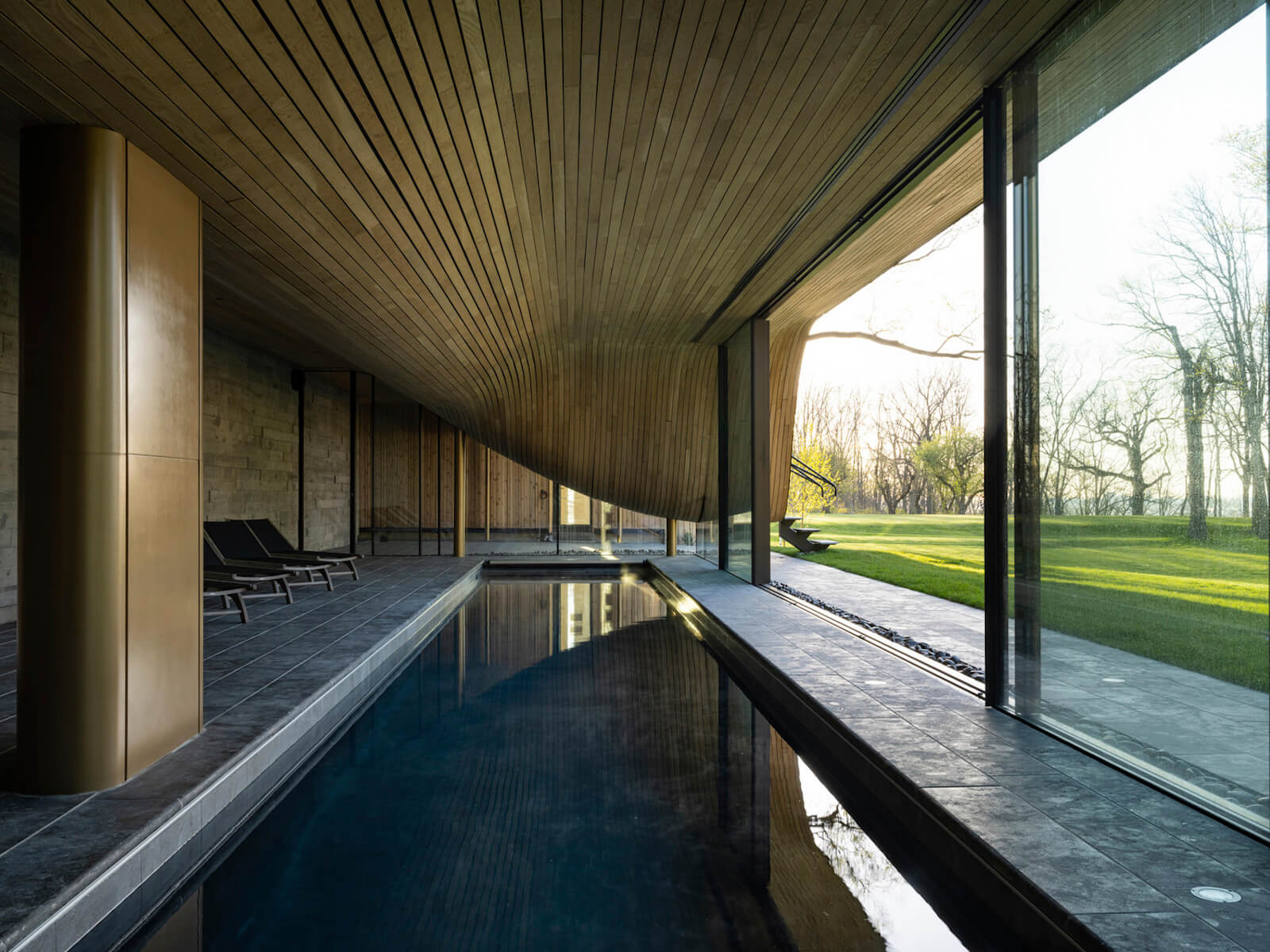 The long retaining wall that shores up the hill into which the pool pavilion is nestled dictated the building’s linear form. The columns are finished in burnished gold auto body paint.

If, on a typical fall day, you stand in the breezeway between the two sections overlooking the main house, the foliage of 200-year-old oak and maple trees burning brightly in the landscape, you feel like you’re in two dimensions at once: the past and the future.

Josephson slides open the glass wall — actually a series of doors totalling almost 25 metres in length — and the impact is at first disorienting: Are we inside or out? Large-format slabs of inky Eramosa limestone, sourced from Owen Sound, Ontario, run the length of the room to provide hard-wearing flooring; a matching tile lines the pool. Overhead, ribbons of white oak follow that slip-fold profile. 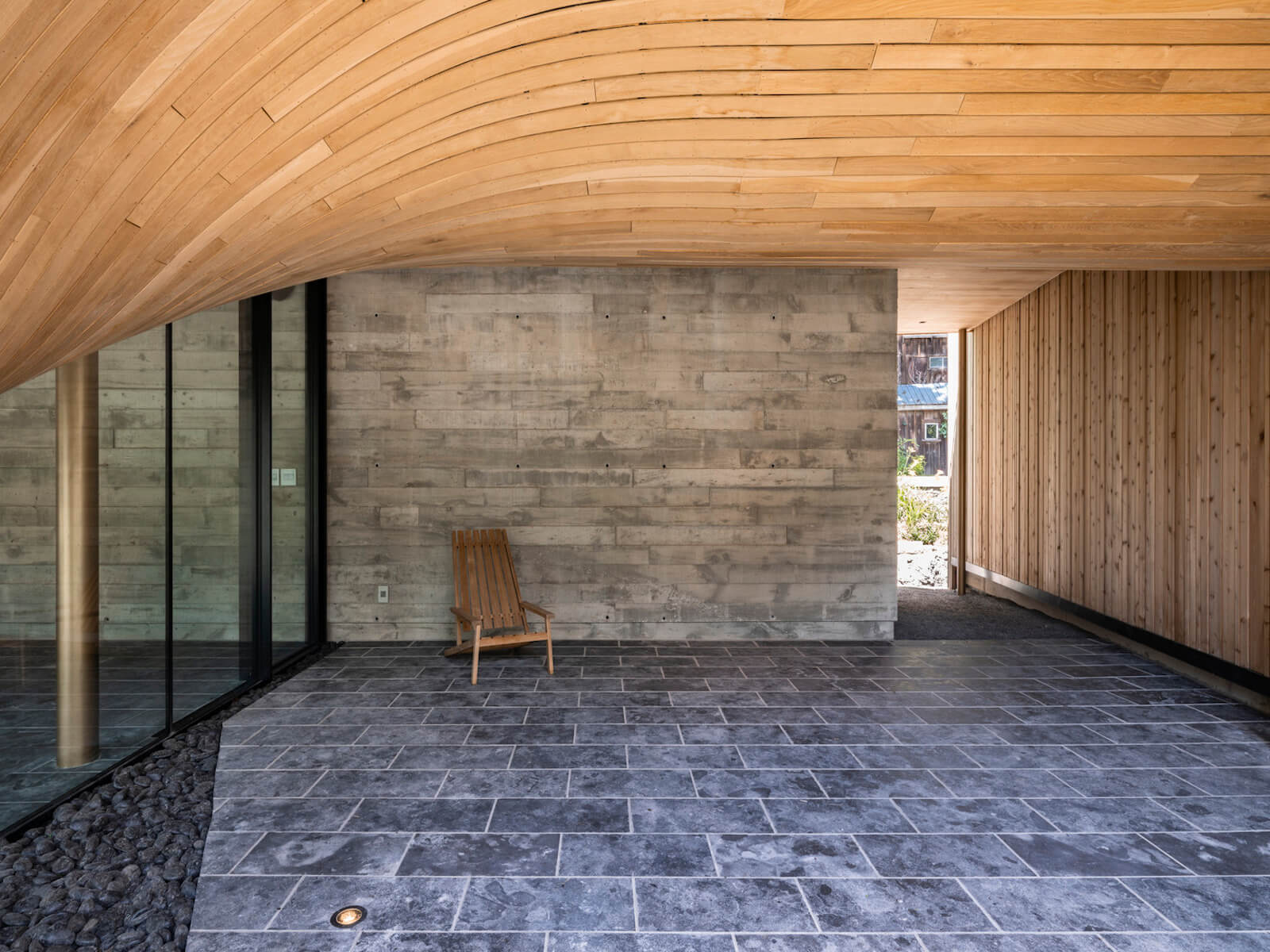 The breezeway between the two sections overlooking the main house.

In places where double curvature exists, the architects carefully slotted into the structure a compressed white oak product more commonly seen in bentwood furniture and musical instruments. All of it works in tandem to create an enveloping, cavelike atmosphere similar to that of some of Partisans’ previous work, notably Bar Raval in Toronto and The Grotto on the edge of Lake Huron, the latter a residential sauna building that was designed to appear hollowed out by tides.

For the interiors of the guest house portion, Partisans collaborated with John Baker of the Toronto design firm and retail store Mjölk to create a palette of tactile finishes and furnishings that lend contrast to the ambitious architecture. The main floor consists of an open living area and kitchen with polished concrete flooring and a run of cabinetry fronted with pink-tinged Douglas fir. 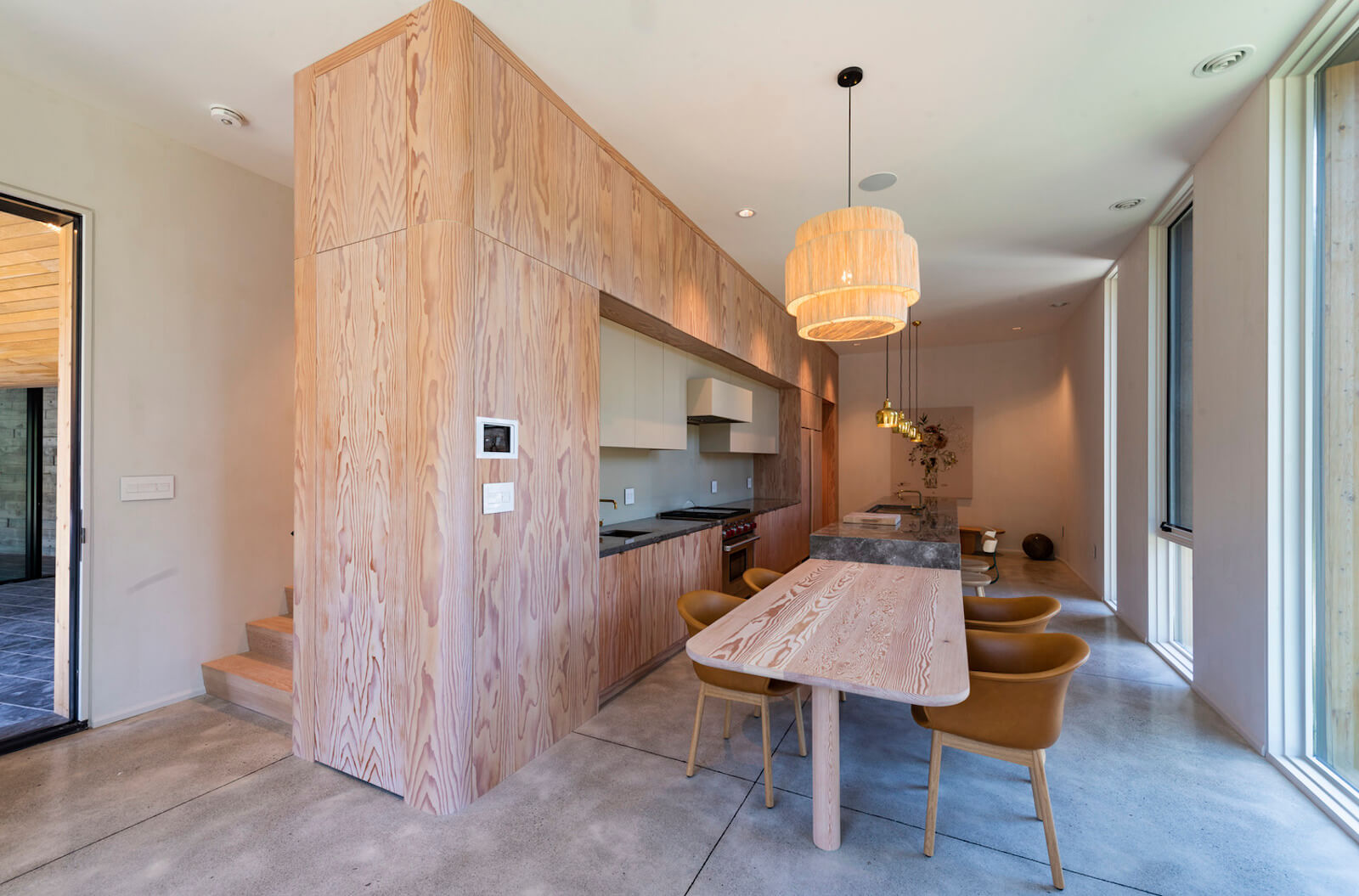 Rounded furniture in rust velvet and nubby oatmeal bouclé references the curved corners of the building’s exterior, while warm metals in the form of bronze sinks, Artek’s Aalto A330s Golden Bell pendant lights and Arne Jacobsen’s iconic KV1 faucet lend a timelessness that would be right at home in the main house. 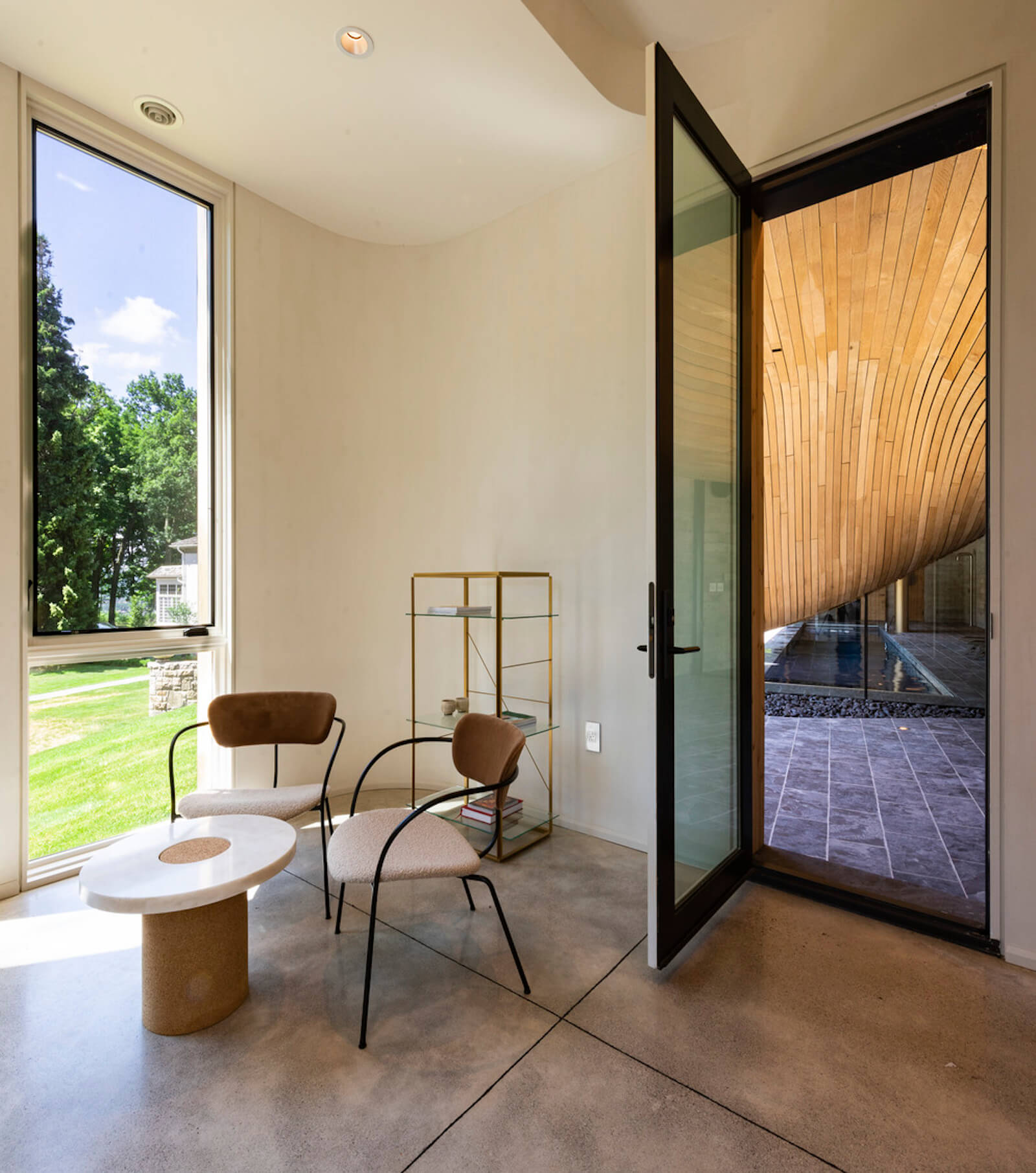 A reading nook with a view nods to all things Danish: a Sintra table from Frama, two Pavilion chairs by &Tradition and the Florence shelf by New Works. 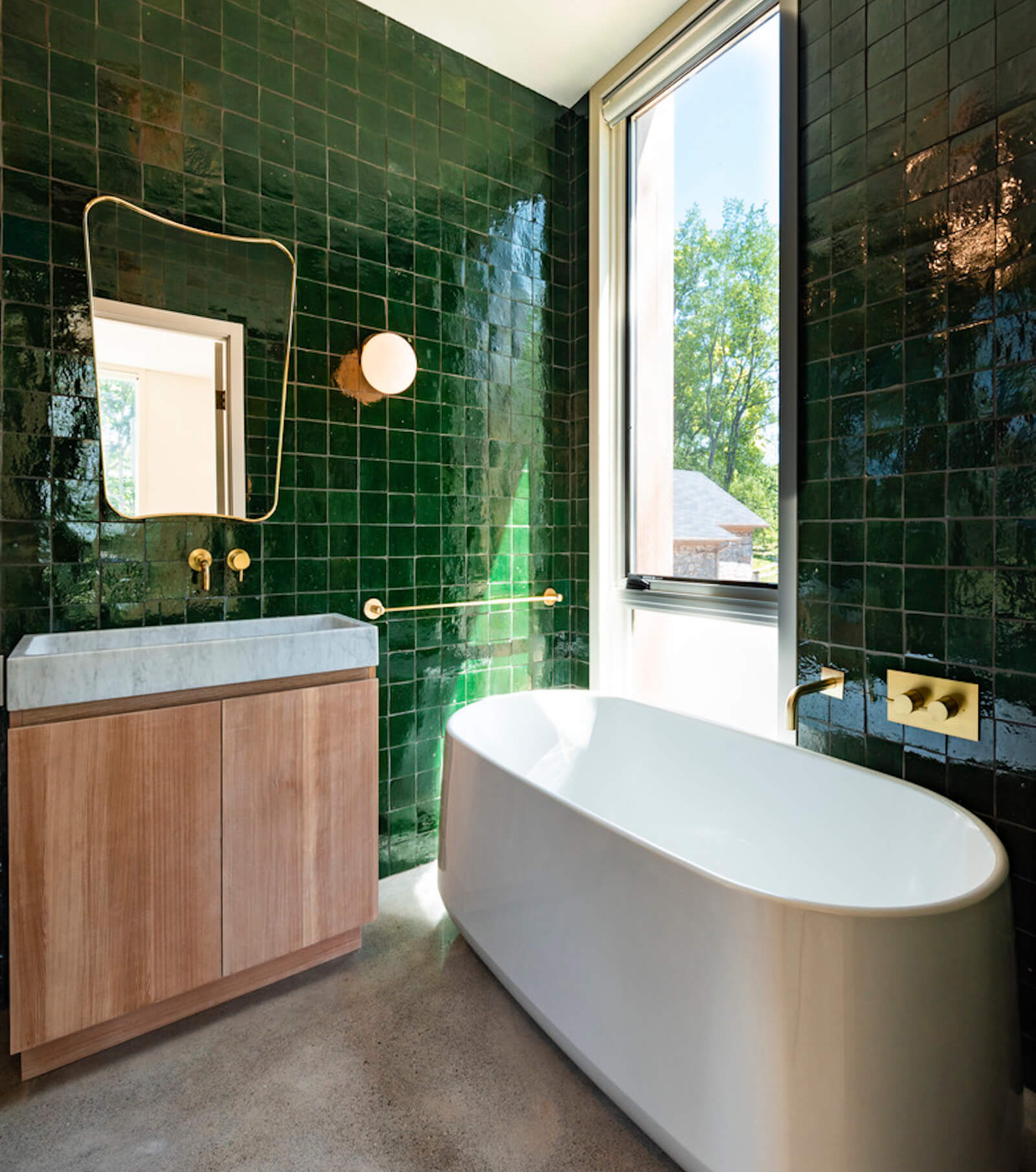 The bright hits of colour provided by the bathroom tile are inspired by such artworks as Picasso’s Green Still Life.

Upstairs, past a light-as-air Gweilo light fixture by Partisans, are two bedrooms, each with adjoining bathrooms wrapped in handmade Zellige tile — an earthy pink favoured by de Kooning in one, an energizing green like that in Picasso’s Green Still Life (1914) in the other. From the basement, a walkout staircase allows easy access to the large vegetable garden, the rear barn and a coop housing heirloom chickens. 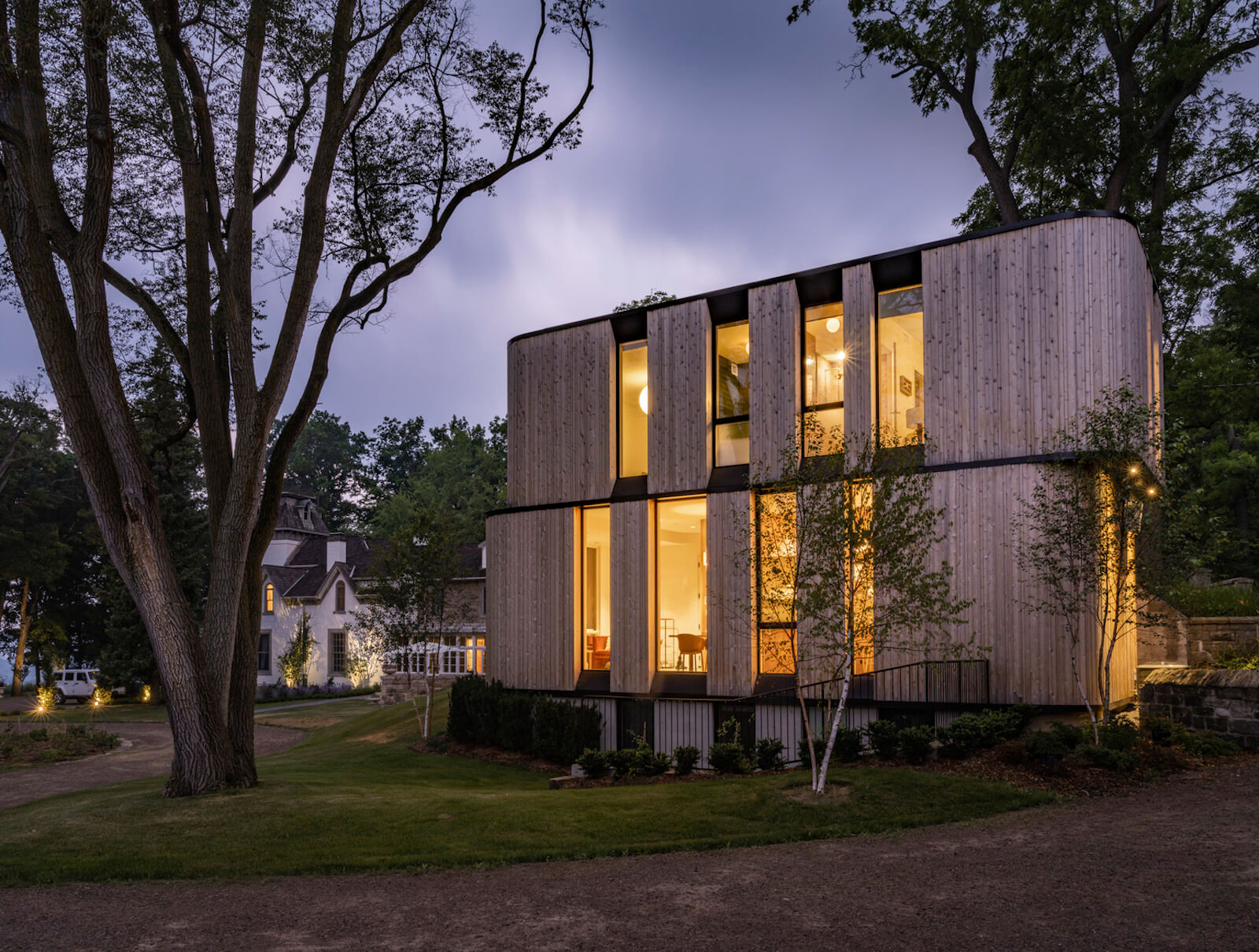 The guest house’s windows are arranged in a checkerboard pattern that maximizes sunlight year-round and reduces solar gain in summer.

Collectively, the buildings operate on a continuum, old to new, historic to unabashedly modern, always exploring (as past and current inhabitants would attest) what it means to live well and fully. With this latest addition, that legacy continues. 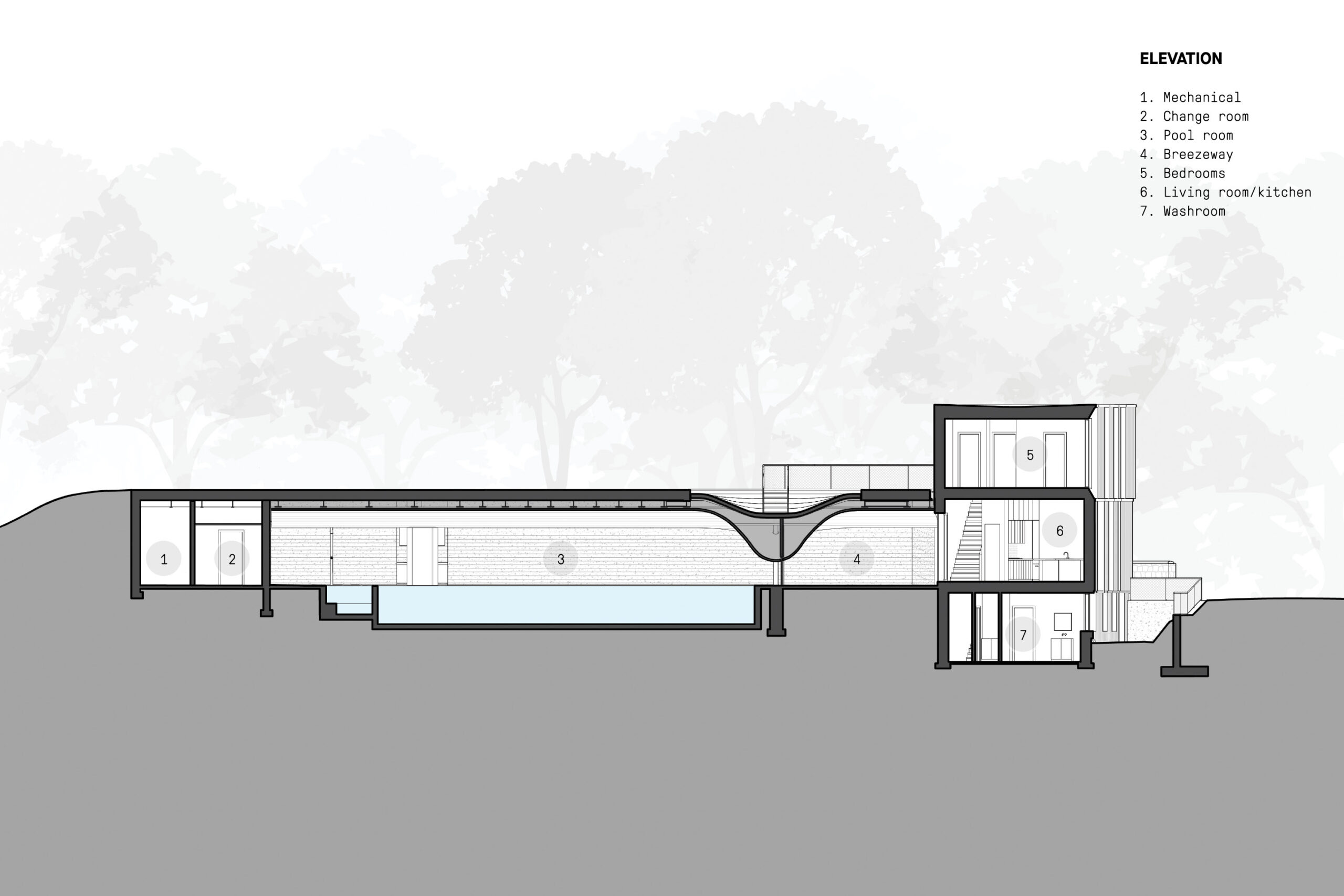 On a historic property along the Niagara Escarpment in Ontario, the Toronto architecture firm builds a guest residence, the Fold House, that looks boldly to the future.