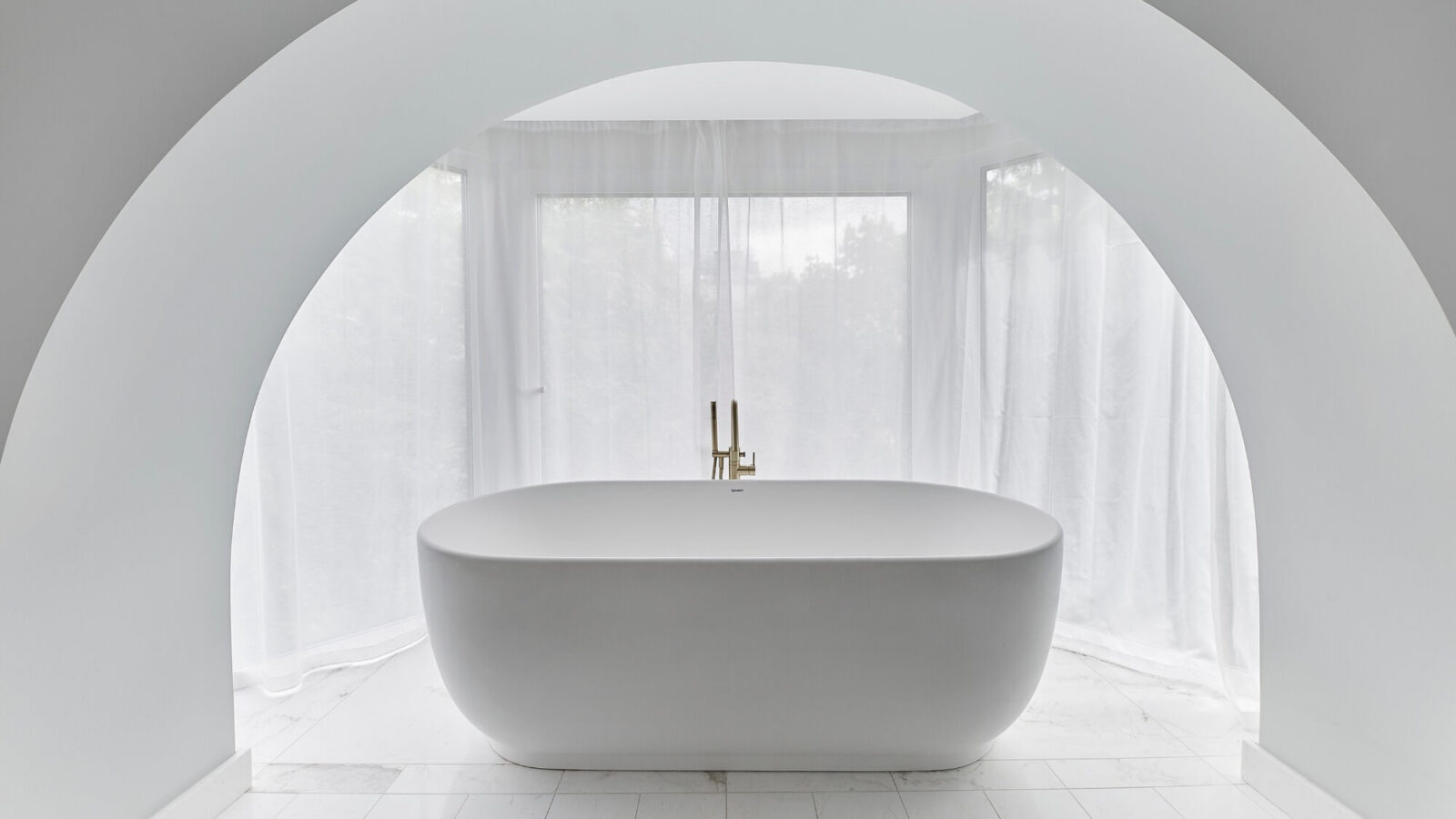 A Stunning Bathroom, Designed as a Private Altar

In Warsaw, Lukasz Kos turns a former furnace room into a light-filled space devoted to relaxation.

The renovation of a Warsaw apartment overlooking a forested bluff came with many surprises. Commissioned to reconfigure the 220-square-metre space, which consisted of the top two floors of a four-storey tenement, Lukasz Kos encountered what he characterizes as a typical Polish “Frankenbuilding.” In the 1990s, during the “wild, free-market period” after the fall of Communism, many buildings that went up in “a quick and rash manner” were originally packed with units. New owners have since taken over to build out their dream homes. “What you have as a result,” explains Kos, “are all these strange architectural compositions.” 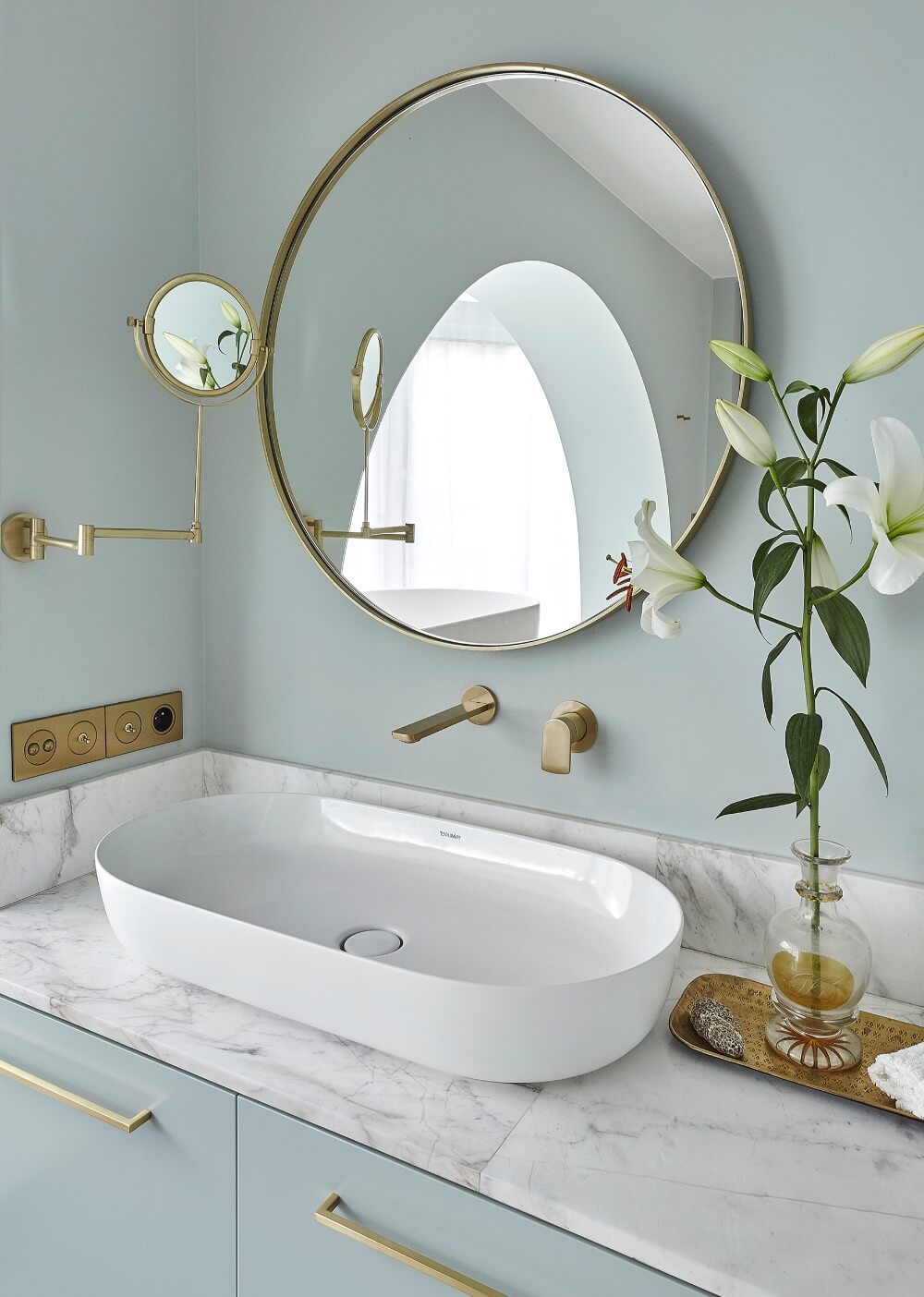 In the particular case of the Urban Forest Apartment, which Kos has created for a family of six, the kitchen was originally “in the wrong place,” as was the staircase, a tight 75-centimetre-wide spiral. Most baffling of all? The furnace room was situated on the top floor, against a cantilevered window wall. Banishing it to the basement, Kos reclaimed the space for the interior’s masterstroke: the main bathroom, with its “altar” for bathing. 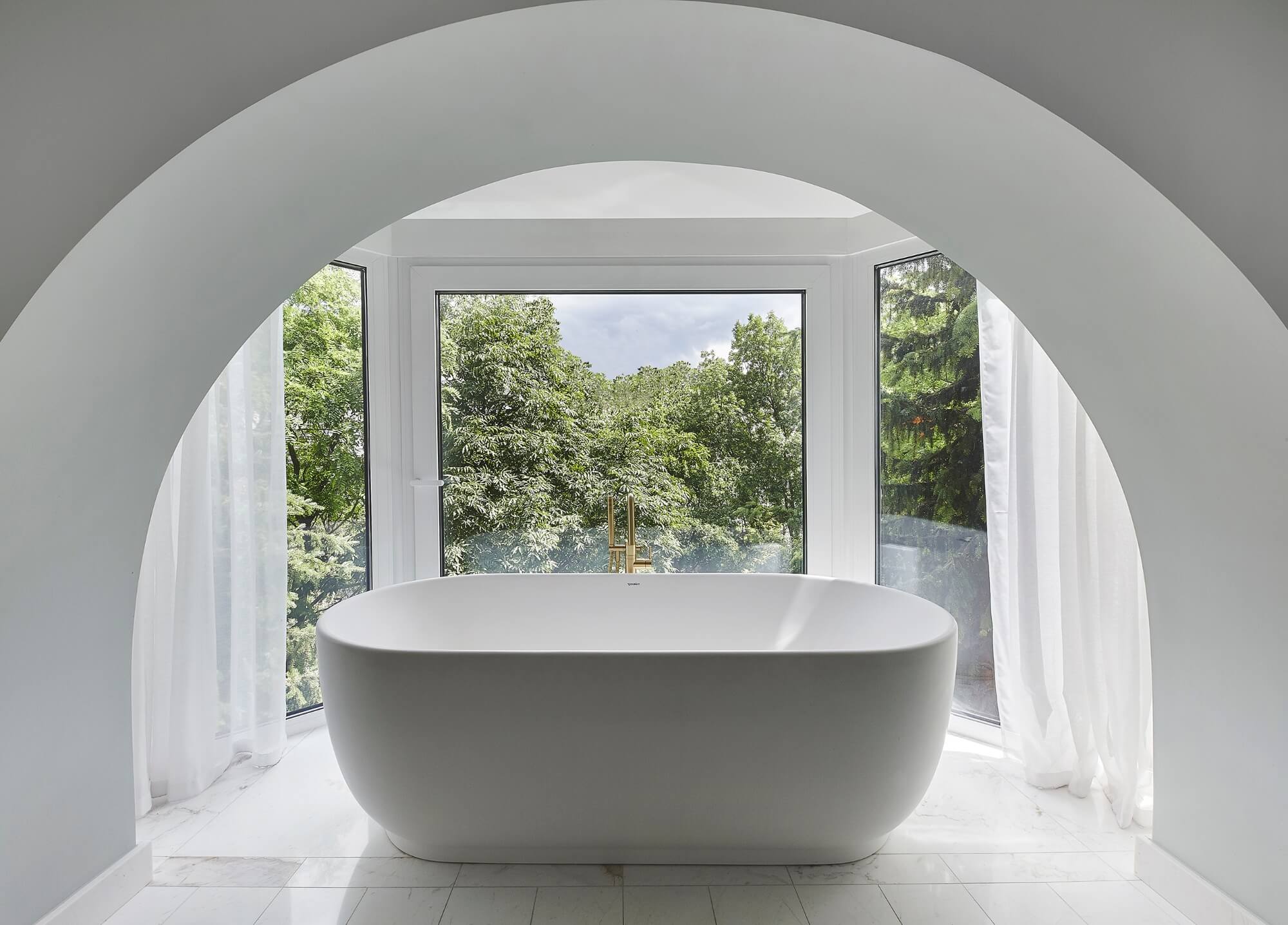 “The room was crying out for an amazing bathtub with a treetop view,” says Kos. And he delivered, gutting the space and transforming the fenestration — which was a “jumble of small windows and balconies” — into a splendid wraparound bay window. The gleaming white Duravit soaker, placed on a platform tiled in honed (and therefore non-slip) marble, has a partial view of the bluff, with its blossoming acacias, on which the home is perched. “You have that solitude in the middle of the city, raised above the ground, between the tree canopies and the sky. It’s a pretty unique experience.” 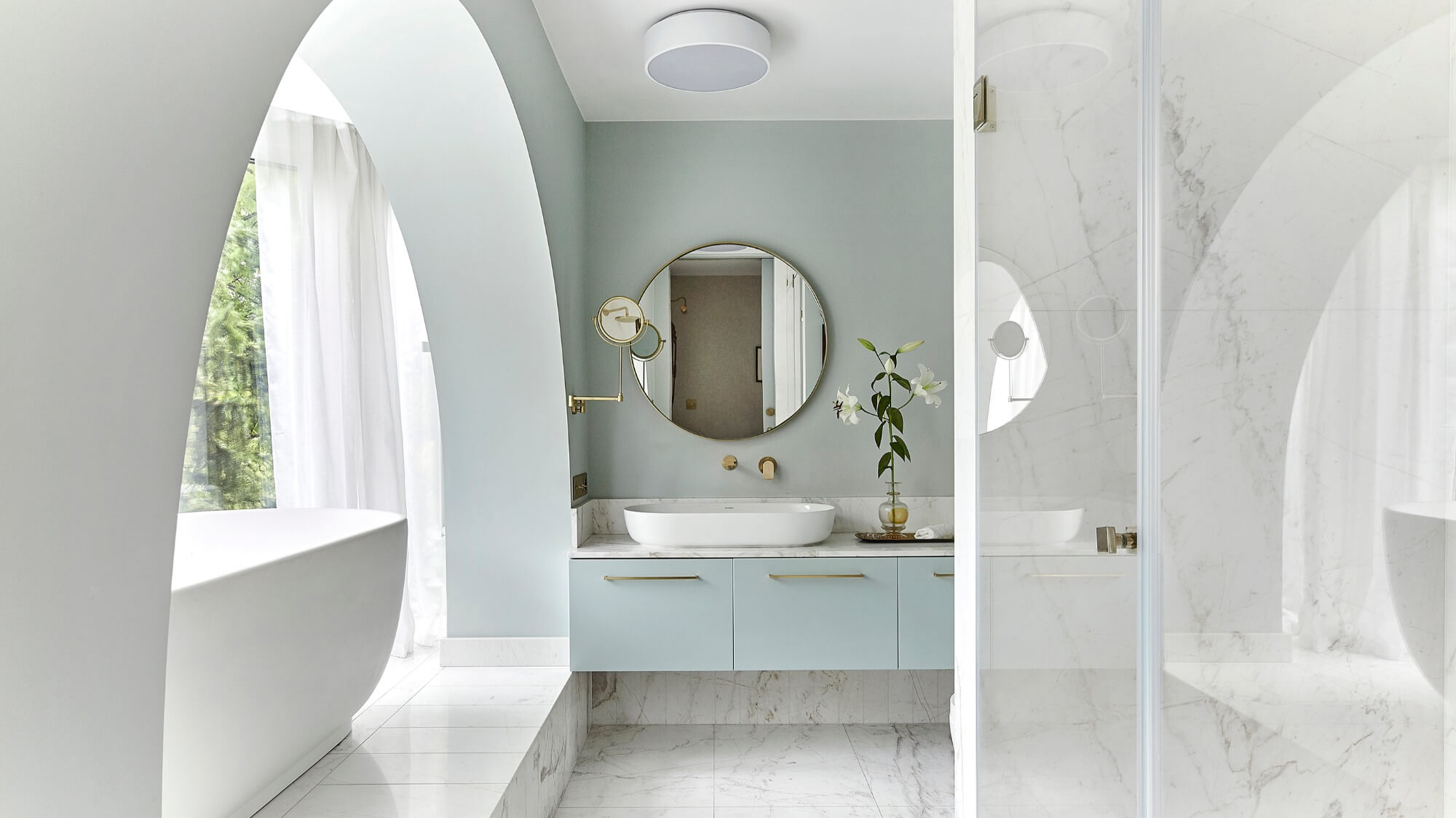 While the idea of a bathing altar might sound fanciful, Kos explains that the design was also dictated by necessity. Placing the tub on the platform allowed for the installation of plumbing underneath; additionally, the stepped surface already existed because of the cantilever of the bay window. The grand, rounded entryway to the altar was also a beautiful solution for concealing the clumsy semi-octagonal arch that provides structural support for the space. 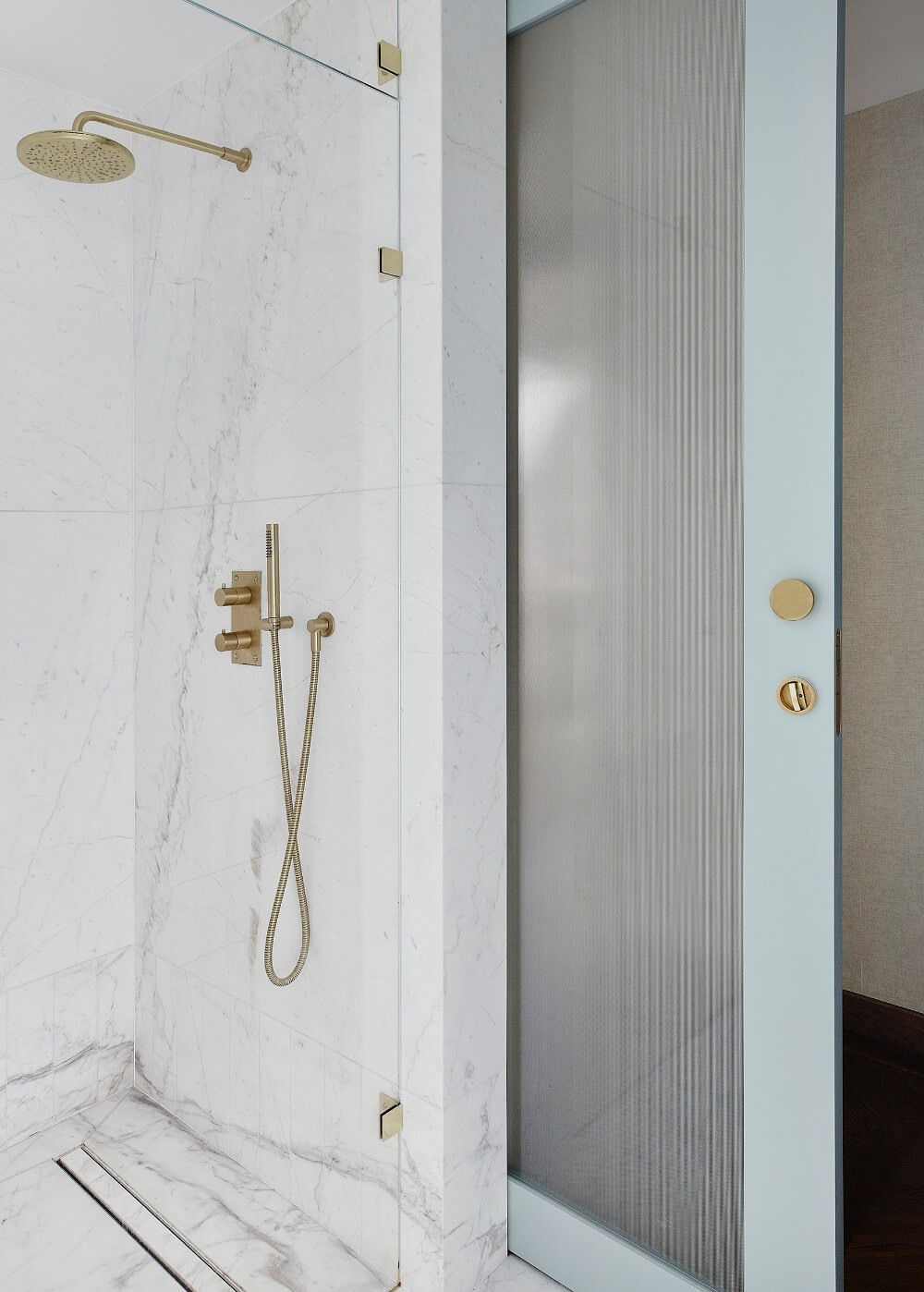 Kos custom-designed the cabinetry (fabricated by Wiechetek Furniture, which he cites as “one of the  best in Warsaw”), giving it a blue–green finish to complement the warm-toned marble slab of the floors.  Along the edge of the raised platform, Kos separated the tile into slender vertical slats, a subtle detail that plays up the scale of the bathroom and references an heirloom artisanry that recalls a fond memory for Kos: He once rented an apartment in Milan with a bathroom floor of caramel-veined marble that seemed as if cobbled together from various sources. “I thought, why not give this bathroom the sense that it’s  been around for a hundred years?”

In Warsaw, Lukasz Kos turns a former furnace room into a light-filled space devoted to relaxation.