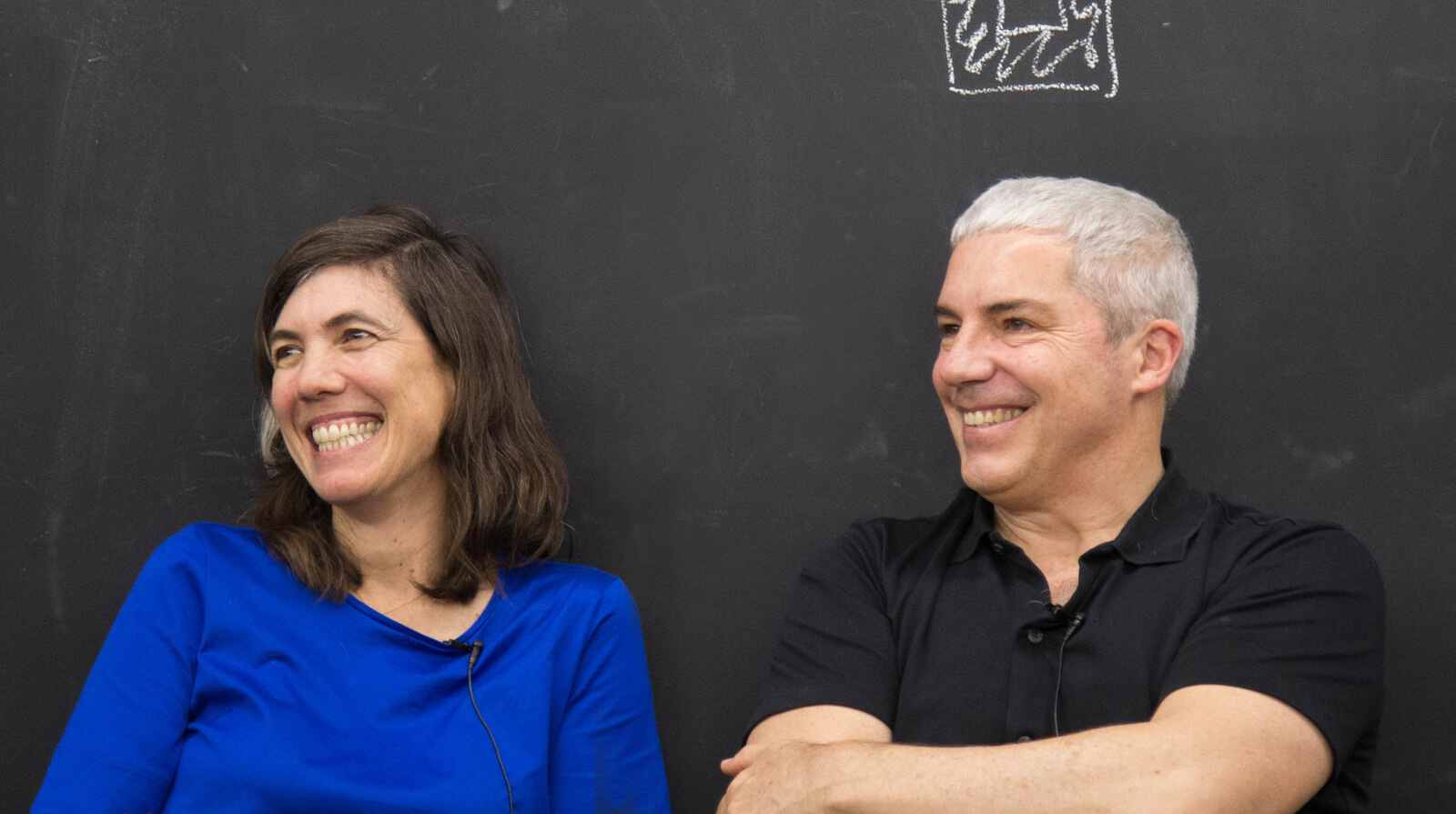 “Architecture Has To Be Generous.” A Conversation with Barclay & Crousse

The Peruvian architects behind such acclaimed projects as the Place of Remembrance and Casa Huayoccari talk with Azure about the expansive spirit of their work.

Working out of Lima, Peru, Sandra Barclay and Jean Pierre Crousse have redefined the architectural possibilities of their Latin American milieu. The pair, who operate as Barclay & Crousse, returned to their native country in 2006 after spending 17 years in Paris, where they had designed a number of social housing projects. What the husband-and-wife team encountered back home was an unparalleled freedom to create a more expressive architecture — one defined by a temperate climate, an arid landscape and the mountainous topography of the Andes — in a country with a political atmosphere that has long been volatile. (Just this past November, its Congress voted to impeach President Martín Vizcarra, whose successor was in turn compelled to resign only a few days later.)

In the context of this dual reality, the couple designs houses renowned for their formal beauty, as well as cultural and educational buildings that bridge the divide between trauma and reconciliation, haves and have-nots. Azure recently caught up with them to discuss their projects, the influences that shape them, and the rosy desert dust that ties them to their surroundings.

One of your first major projects when you returned to Peru was the Place of Remembrance, which was neither initiated nor supported by the government at the time. What was it like to return there and work in such a charged political atmosphere?

We were both born in Peru and we lived here up until university. The country, it seems, has been permanently in crisis. We have had so many Trumps in our times, only less powerful. We have suffered a lot, politically and economically. What we loved about this project was that it’s a very different kind of museum — one of memory, of place and of remembrance — compared to similar museums in other Latin American countries. And the necessity to heal wounds didn’t come from the government but from the people.

So instead of it being a top-down process, it was a bottom-up process, one contested by the government because a wide political spectrum, from left to right, came together and decided that what was initially a report on reconciliation [headed by Nobel laureate Mario Vargas Llosa] should also be a place where people reconcile. It was very symbolic. And the fact that the government didn’t like it legitimized it.

It was also an important project because we had to ask the question, “What is the relationship between architecture and memory?” And those tragic memories, specifically. Is architecture going to express those horrors or not? In the competition for the commission, we asked all these questions and decided to work instead with other memories: with the memory of territory and of place — that site in particular, on the coast bordering Lima. In the end, it is a building made only by the structure and the light; you have no other elements. Its austerity is vigorous. 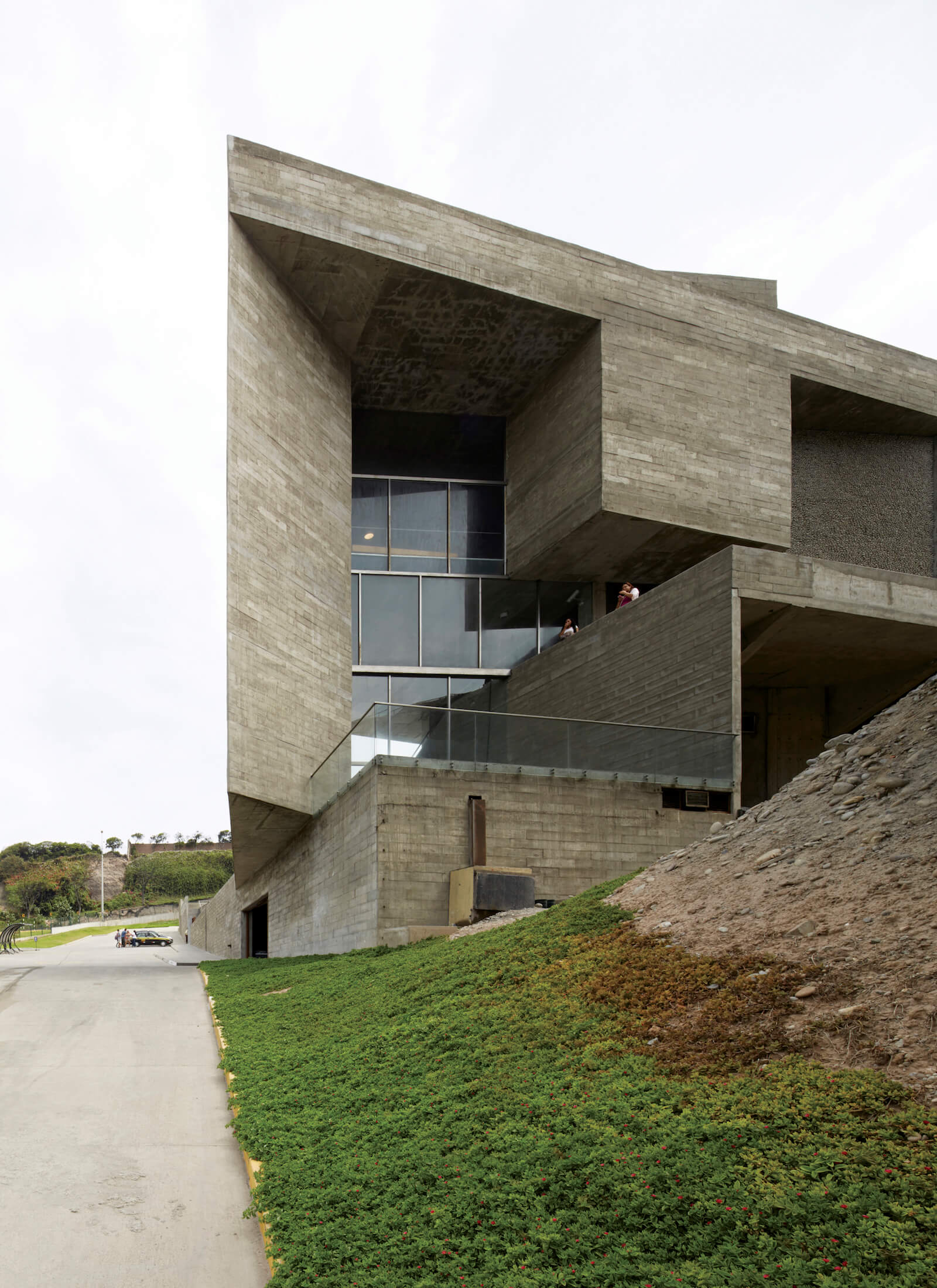 Carefully inserted into the cliffs and ravines of a coastal site near the capital, Place of Remembrance was designed to heal some of the wounds inflicted by the violent internecine conflict that has plagued Peru since the eighties.

That makes me think of one of your most famous projects: a new building at the University of Piura. There, the spaces in between the structure are almost more important than the structure itself. That project also had a social significance. It was built for students who couldn’t afford to go to university, and those voids you carved into the building were meant to bring together all students regardless of their socio-economic differences. How was that project’s design reflective of the ways you hoped it might be used?

The origin of that building was a government scholarship that allowed students from low-income and rural families to study in private universities. There are very few good public universities here. The university embraced the scholarship and accepted 800 new students and commissioned this building to accommodate the larger cohort. One of the big issues was how the new students who come from the fields would intermix with more urban, wealthier students outside of the classrooms. It was determined that we should provide spaces for these encounters between them — and also because we know now that real learning does not necessarily occur in classrooms, but in the spaces between classrooms.

Also, in climates like ours, providing lots of non-programmatic spaces is very cheap — you don’t have to insulate them, waterproof them, heat them or cool them. You only have to provide really passive means of comfort. So that was our foundation for expressing another idea that is very important to us: Architecture has to be generous. We need more of these types of places, as the pandemic is reinforcing. We need more generosity everywhere and especially in architecture. 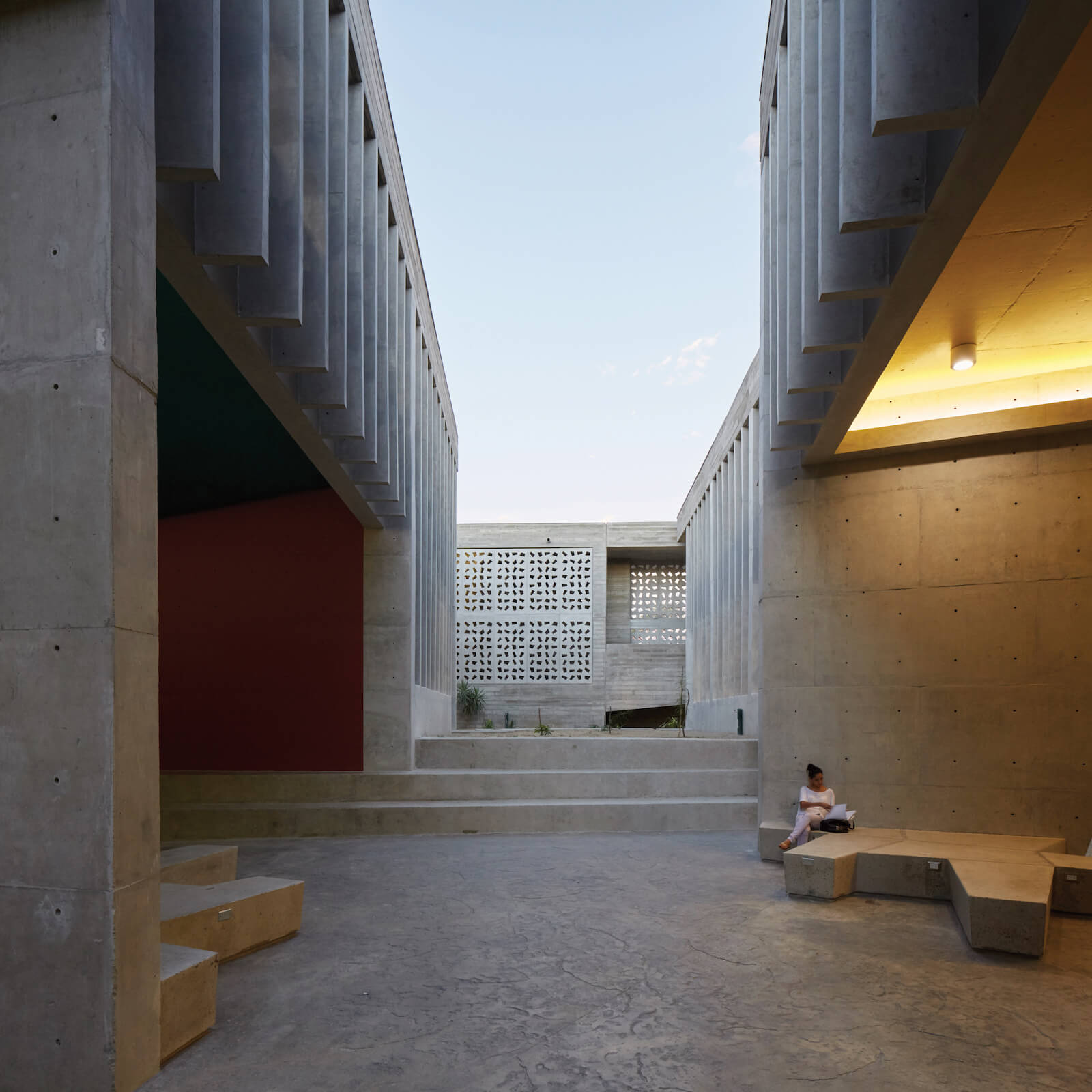 The inviting “in-between” spaces that the practice wove into its creation of a new building at the University of Piura are intended to foster meaningful links between students of disparate backgrounds.

Speaking of generosity, your house designs — with their soaring peaked roofs and jutting windows — seem intended to give more to the people who reside within them. You often describe your work as drawing inspiration from its surroundings. For instance, you characterize Casa C3 as a soil extrusion rather than an object in the desert landscape and Casa Huayoccari’s shape as being influenced by its site in the Andes. Yet the final results are so expressive. I was wondering how you describe the aesthetic or visual language of your architecture.

With Casa Huayoccari, we wanted to resonate with the surrounding mountains, so it came naturally to work with this big roof. We were really working with the landscape as the Inca did. We organized the land and then the house as a series of platforms. The Inca transformed the landscape with terraces; we did the same, and only covered those terraces with a roof that has this shape of the mountains. We worked with a version of the passive roof to create the courtyard, for intimacy. You have different types of spaces in this sequence of exterior spaces: the terrace, the loggia, another courtyard, then another terrace. It’s related to the idea of experiences — actually experiencing the house, and not having it exist as an isolated object. 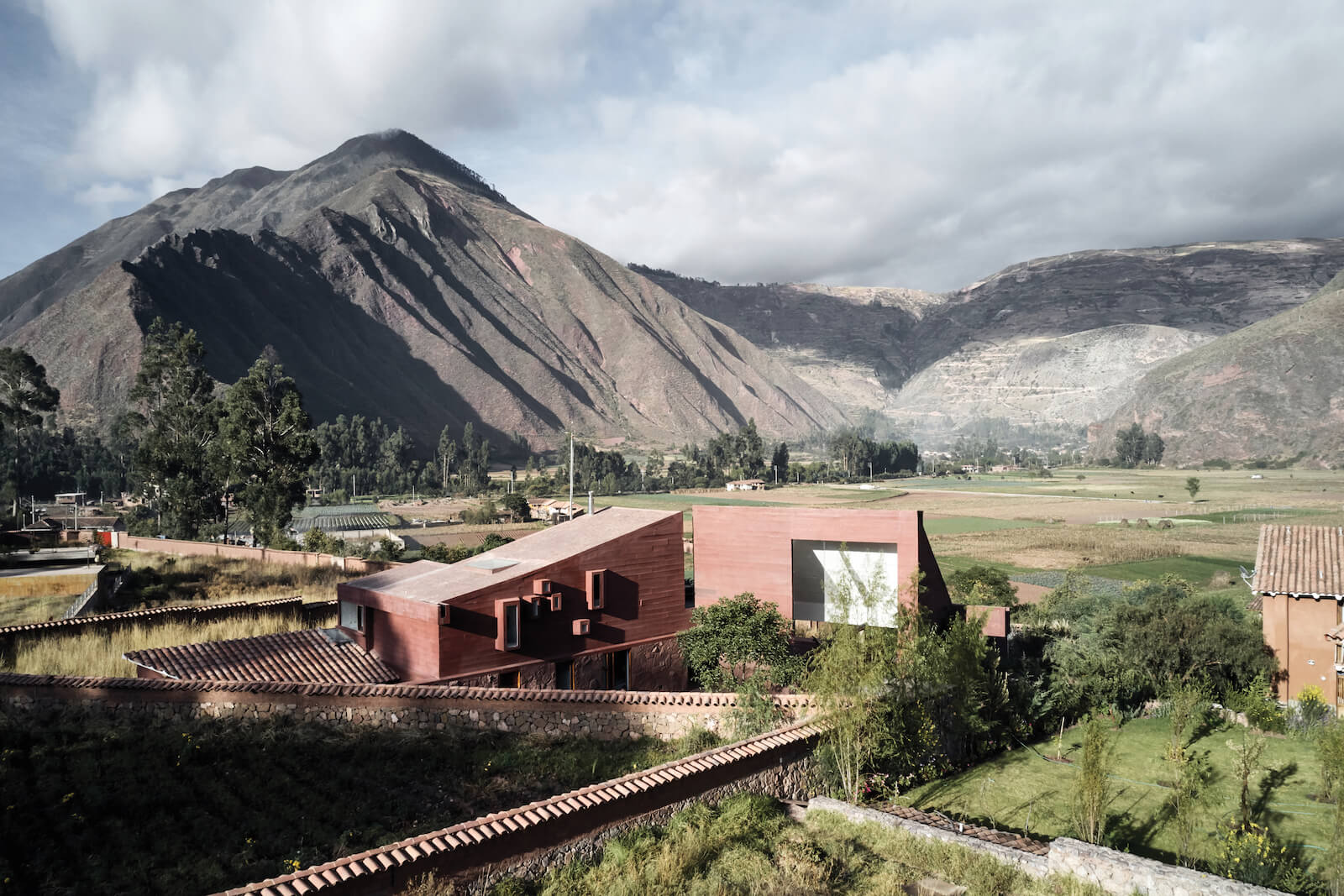 Reflecting their Andes setting structurally as well as culturally, the sloped roofs and sequential layout of 2018’s Casa Huayoccari evoke both the nearby mountains and the terraced landscapes of the Inca.

You typically start a project with the environment itself. And then designing the section becomes very important — more so than the plan. Often, your chosen material is poured concrete, which creates very muscular volumes. Are these three approaches — climate, section, material — top of mind with each project?

We like to work with the things that are easily available in the places we build. The absence of rain, the mild climate and the barren landscape are materials, too — just like concrete is. If we work with concrete, it’s for two reasons: The main reason is the fact that we often work on the Peruvian coast, which is a desert. And people here know how to build in concrete, which means we can hire local. The second reason is that we’re always trying to merge with the landscape, not by doing architecture that erases itself, but by doing architecture that is one more layer in the landscape: It has its presence but at the same time is dependent on the landscape, just as the landscape is dependent on the architecture.

One way to do it is to have the same hue as the desert. And we find concrete is the best way to do that, not because we put aggregates or colour additives into the concrete, but because there’s a lot of dust in the desert. The type of concrete we use, and how we form it, absorbs the dust so that in very little time our buildings are exactly the same colour as the desert. 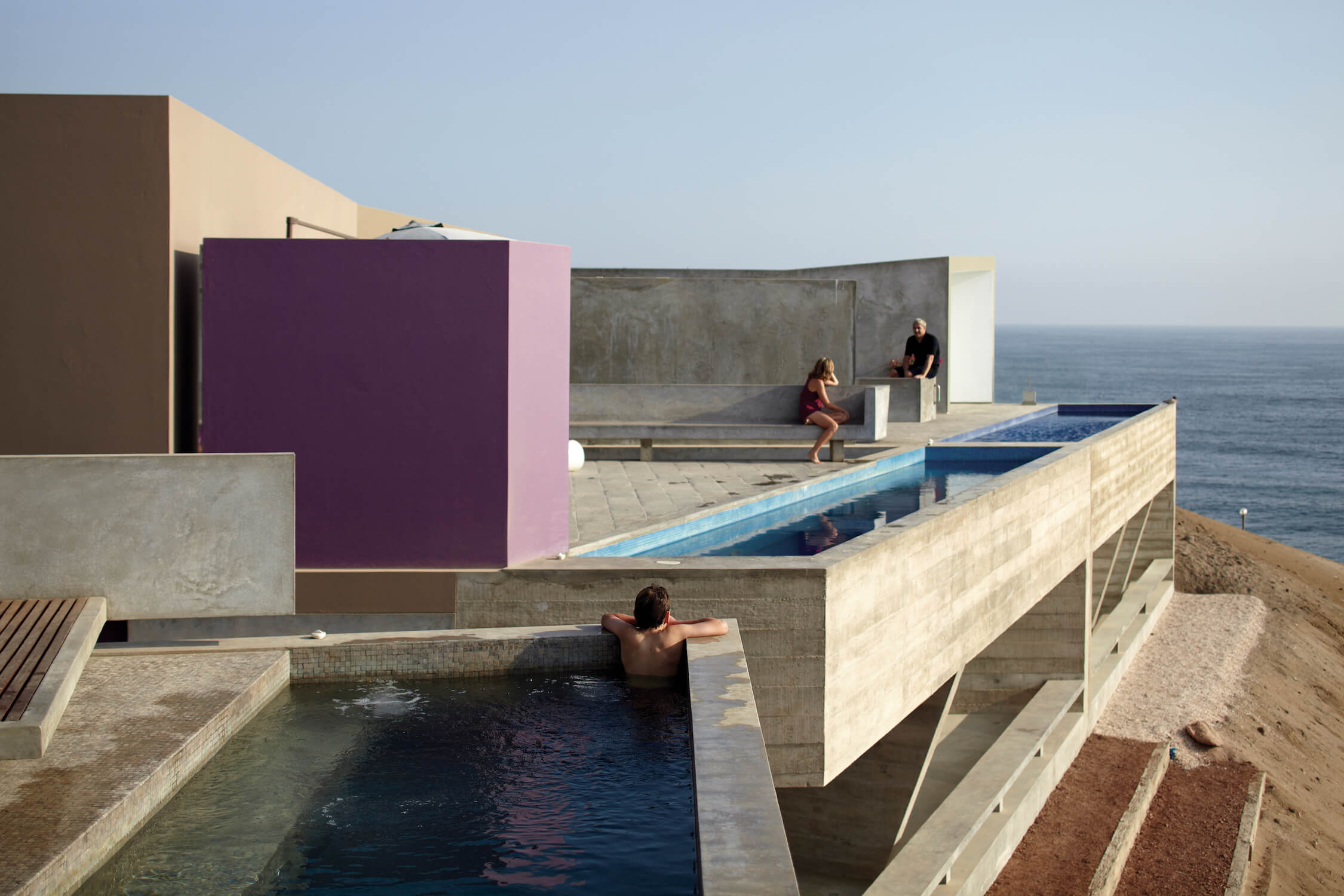 Despite some hits of colour, Barclay & Crousse’s cliffside Vedoble Houses, on a breathtaking stretch of the Pacific south of Lima, read as semi-natural outcroppings when seen from the ocean.

In relation to the section, we have found that, in a plan, you might be able to explain how people move in a building and how it’s organized, but you can’t explain the space. The section explains the strategies of how space and light and territory and topography are worked in. For us, it’s impossible to think about topography or space or light in a plan.

In the past, you have said that, in Peru, you have more freedom than you had in Europe. Are you referring to regulations that may hinder freedom in Europe compared to a place where there wasn’t much happening in contemporary architecture at the time?

In part. Also, I think it was the opportunity to try to do a different architecture, based on what we saw as problems to be solved. We always love to find opportunities in problems. And returning to Peru opened up a new set of problems: working with the little means we have, economic and technological restrictions.

It was also about rediscovering craftsmanship, which in Europe is gone when it comes to normal buildings, though you might have good craftspeople if you’re restoring places like the Louvre or Versailles. Here in Peru, builders are still worried about building well. Not perfectly, but well. And in general, in all developed countries, financing and insurance companies are now dictating what can and can’t be done by architects. There is very little space, unless you’re a rock-star architect, to do research and innovation in architecture. 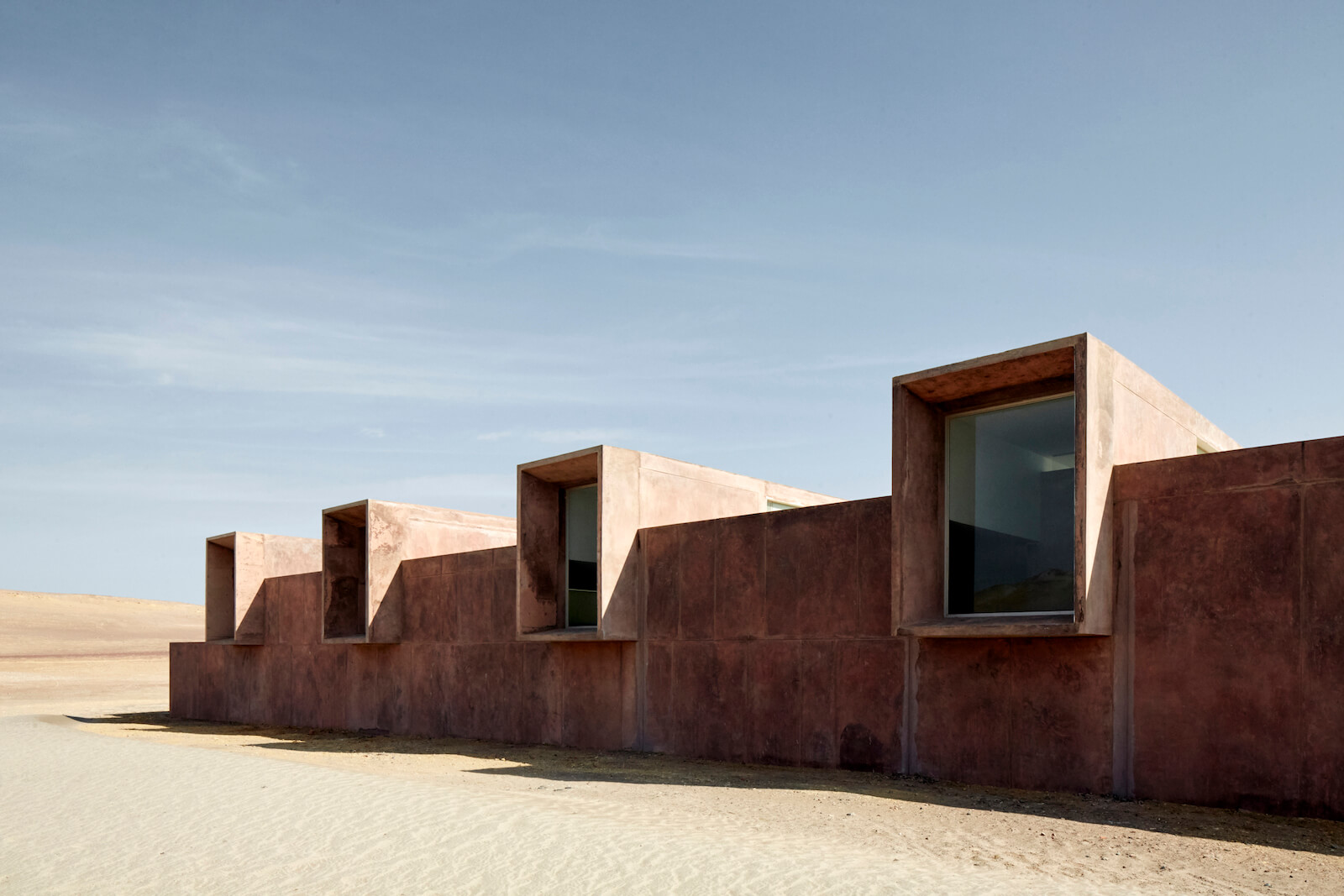 As site-sensitive as a building can get, Museo Paracas, an archaeological museum built of reddish pozzolan cement, is of a piece with both its desert setting and the ancient ceramics inside.

There are also many things here that are truly advantageous. For example, we have an incredible temperate climate that allows us to do architecture with the essential elements; we try to enhance space with structure, and not add anything else. And here, you don’t need layers of protection, and so you can really have a more direct relationship between interiors and exteriors, extending the former into the latter.

We were fascinated by these possibilities, and now that we’ve experienced them and learned to value them, we incorporate them in our work. Our houses in Peru, which we started in Paris and pursued when we moved here, were a laboratory to test our strategies. When we had the opportunity to do Casa Huayoccari in the Andes, it was challenging because the climate was different from the desert, but we wanted to work with these same types of spaces. 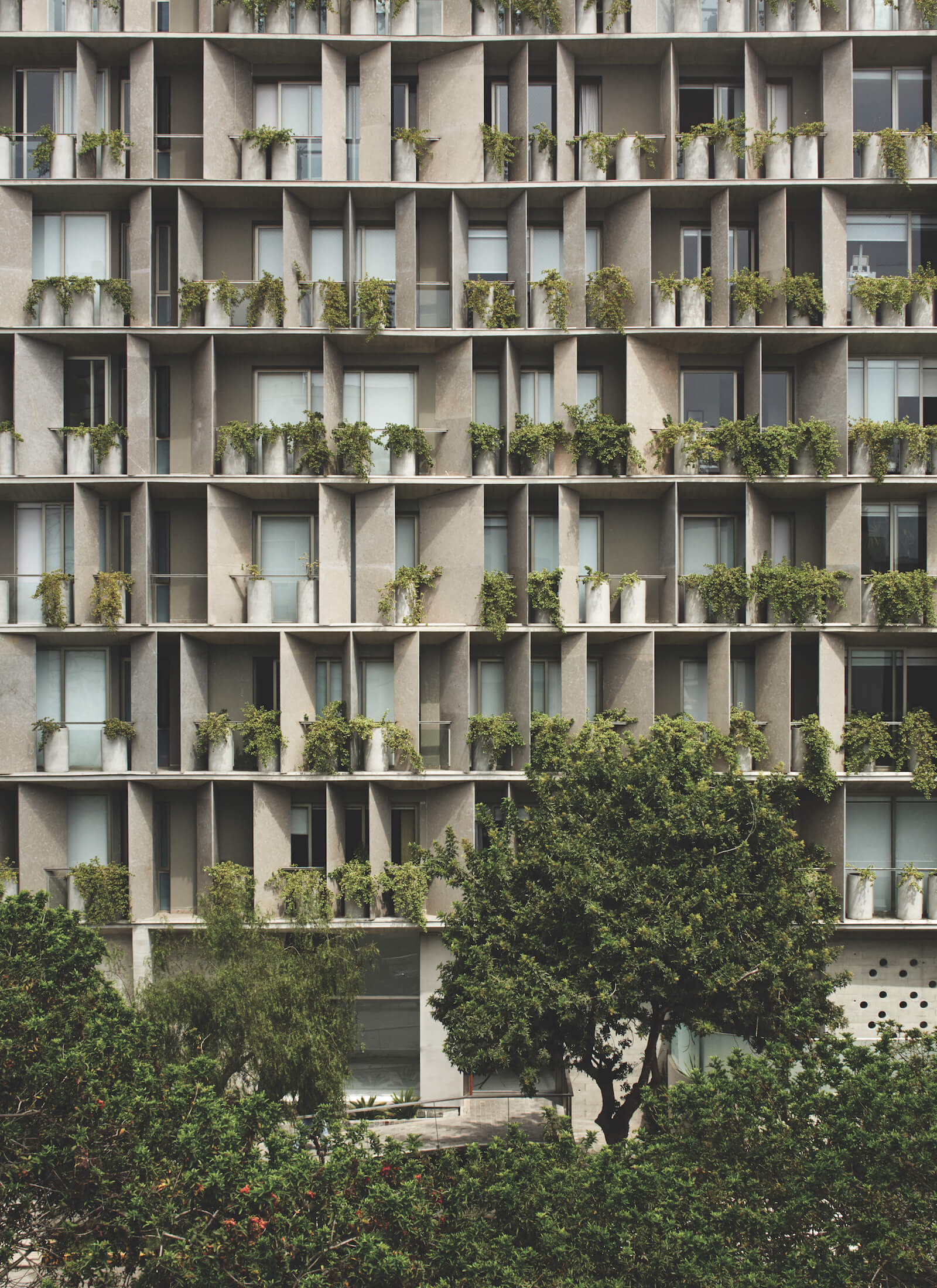 One of the advantages of working in a mild climate, say Barclay and Crousse, is the ability to really connect indoors and out — even in high-rises. Their UN Park Apartments in Lima, for instance, extend the greenery of an adjacent park via a common vertical garden that peppers the facade.

And also to work with the notion that architecture is beyond a shelter, and beyond the notion of shelter. Working in this place, architecture really relates less to the loggia, the hut or the cave as an archetype and more to Stonehenge. It’s more about a relation to the cosmos.

And to the territory.

The Peruvian architects behind such acclaimed projects as the Place of Remembrance and Casa Huayoccari talk with Azure about the expansive spirit of their work.