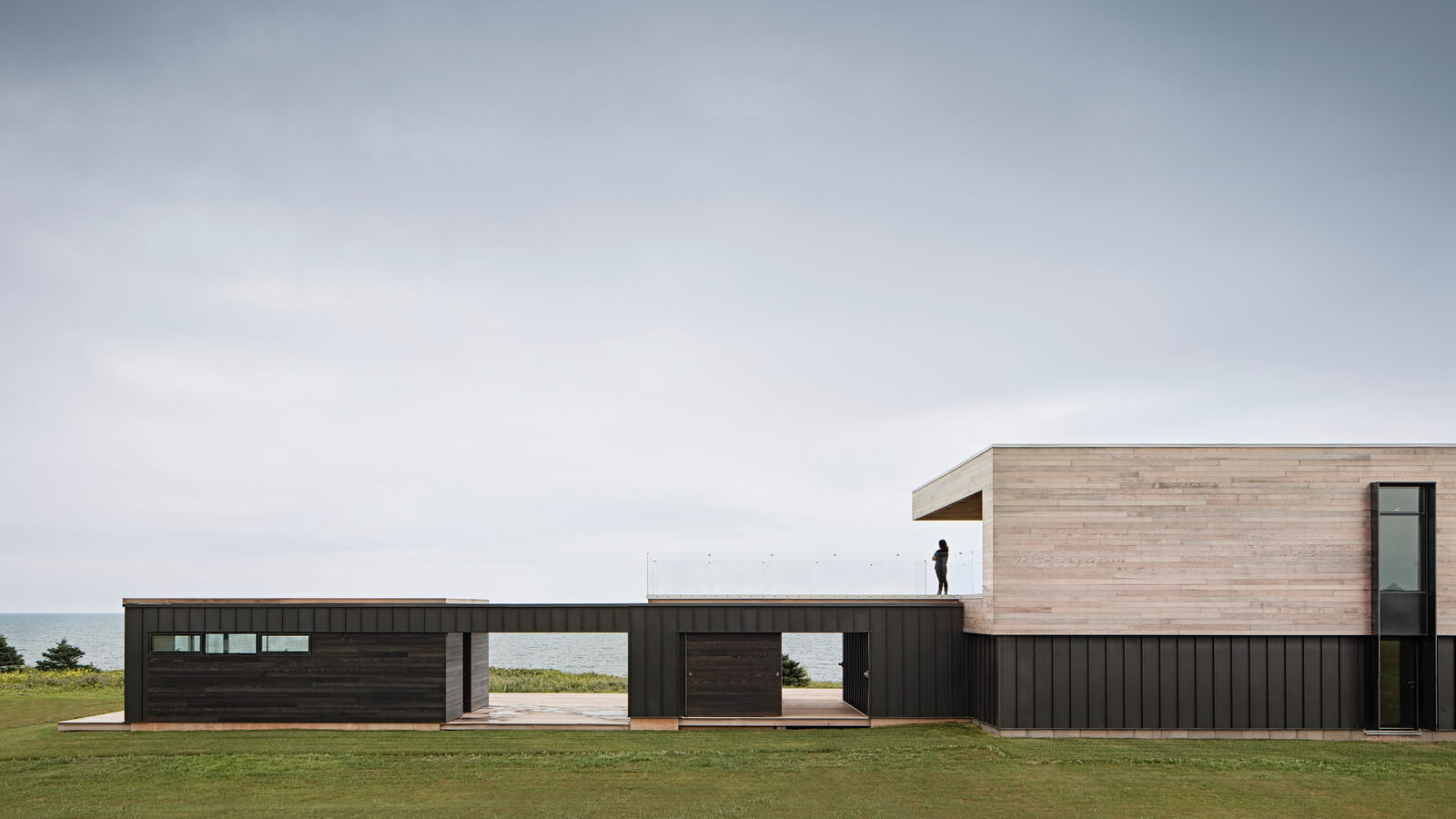 In PEI, a Getaway Home by Nine Yards Studio Embraces its Atlantic Setting

Stretching like a brushstroke across the rural landscape, a low-lying vacation property by the Charlottetown-based studio provides discreet yet expansive refuge for a big-city family.

Rolling hills and beachside cliffs. Rust-hued soil broken by outcroppings of sedimentary rock. Prince Edward Island is Canada’s smallest province both by land area and population, but its distinct landscape has an outsized place in the national imagination. It’s where Canadians dream of escaping to in search of simpler, quieter lives. “You never know what peace is until you walk on the shores or in the fields or along the winding red roads of Prince Edward Island in a summer twilight,” wrote Lucy Maud Montgomery, author of Anne of Green Gables and one of Canada’s most famous writers. 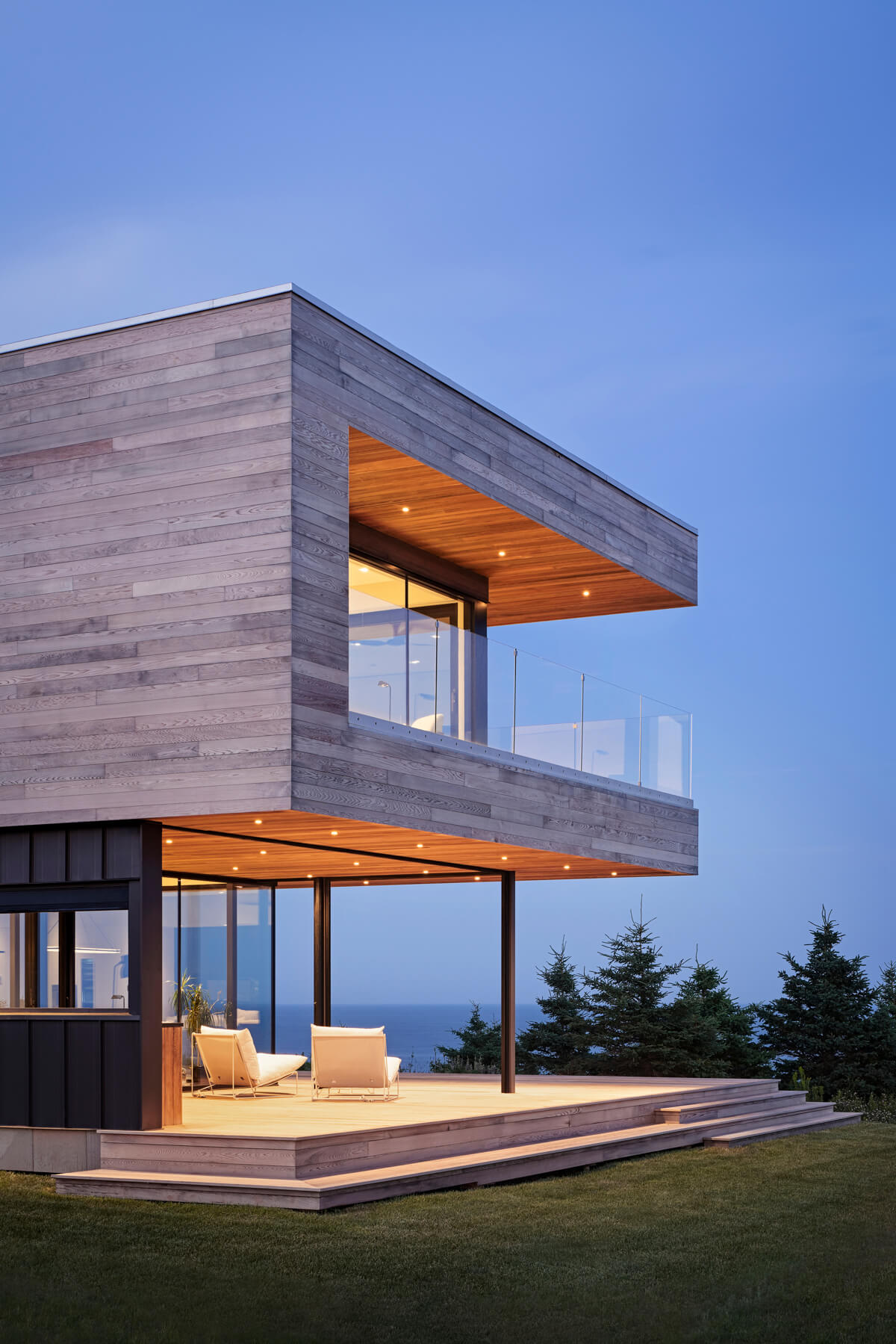 Architects Silva Stojak and Shallyn Murray, co-founders of Nine Yards Studio in the provincial capital of Charlottetown, recently designed an abode at one with the island’s topography while simultaneously embodying its tranquility. The clients, a four-member family from Toronto, wanted a vacation cottage to decompress from the hustle and bustle of their hometown, a city with almost 20 times the population of PEI (and which no serious writer has ever described as peaceful). Their pastoral, 2.4-hectare lot sprawls across the edge of Howe Bay, an inlet off the Northumberland Strait, the deep-blue saltwater passage that separates PEI from the rest of Canada.

A Toronto clan’s coastal getaway hugs the horizon on PEI’s Howe Bay. A double-storey notch in the landside facade signals the front door.

On approach from the road, which winds into the grassy site toward the sea, the architecture appears of a piece with the land, taking its cues from the horizon just beyond. The lower level, clad in matte black steel, stretches like a long, graceful, continuous line. It is only on closer inspection that the “single” volume reveals itself to be three separate pavilions — a 40-square-metre bunkie, a 20-square-metre storage shed and the 220-square-metre main living, dining and entertaining spaces (including a games room). “They are linked at the roofline to maintain that strong sense of horizontality,” says Murray. “As people walk in the breezeways between, they can look out to the water, feel connected to nature.” 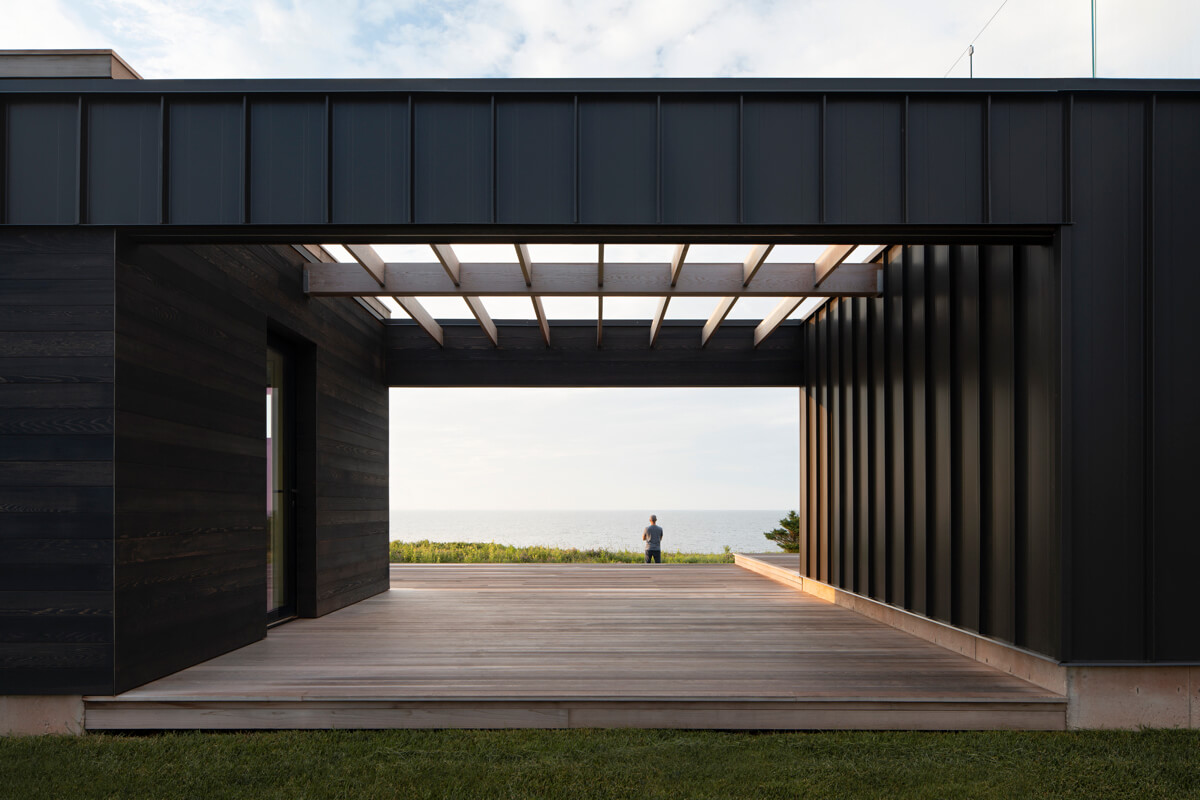 The breezeways connecting the trio of ground-floor units — a bunkie, a storage shed and the living quarters — also frame views of the bay.

The presence of a second storey could have easily marred the effect. Yet the upper section of the house, which is 180 square metres in total and contains four bedrooms, is unobtrusive — partly because it’s wrapped in pale western red cedar and partly because it’s offset from the lower storey, creating a sea-versus-sky, earthbound-versus-airy contrast. At one end, it cantilevers, appearing to float above the ground, rooted only by a two-storey, steel-lined notch that slices vertically between both levels to accentuate the location of the front door. 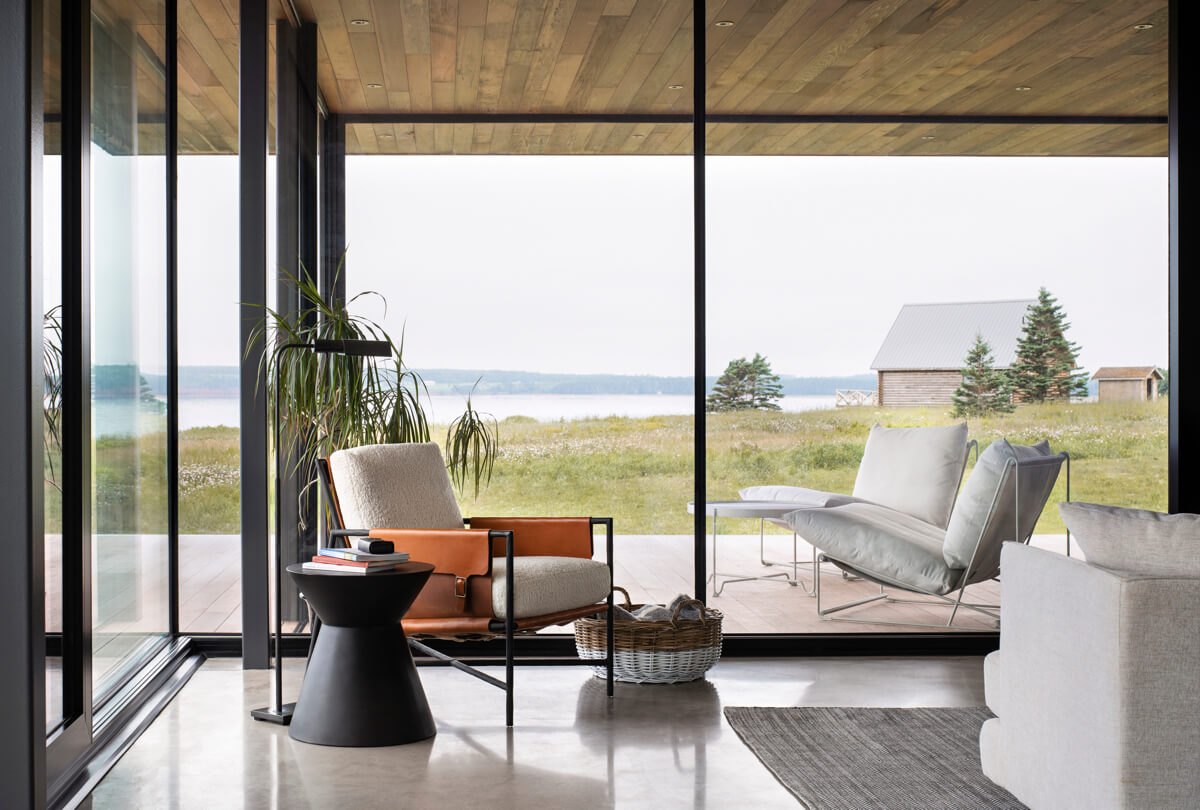 Indoor and outdoor living meld seamlessly at one end of the deck-lined first level, anchored by a capacious great room.

To Murray, the dichotomy between the lower and upper sections has another function. “The metal is sturdier and signifies the public spaces, where more durable materials are needed,” she says. “The wood is more delicate, befitting the less public, more private upper level.” 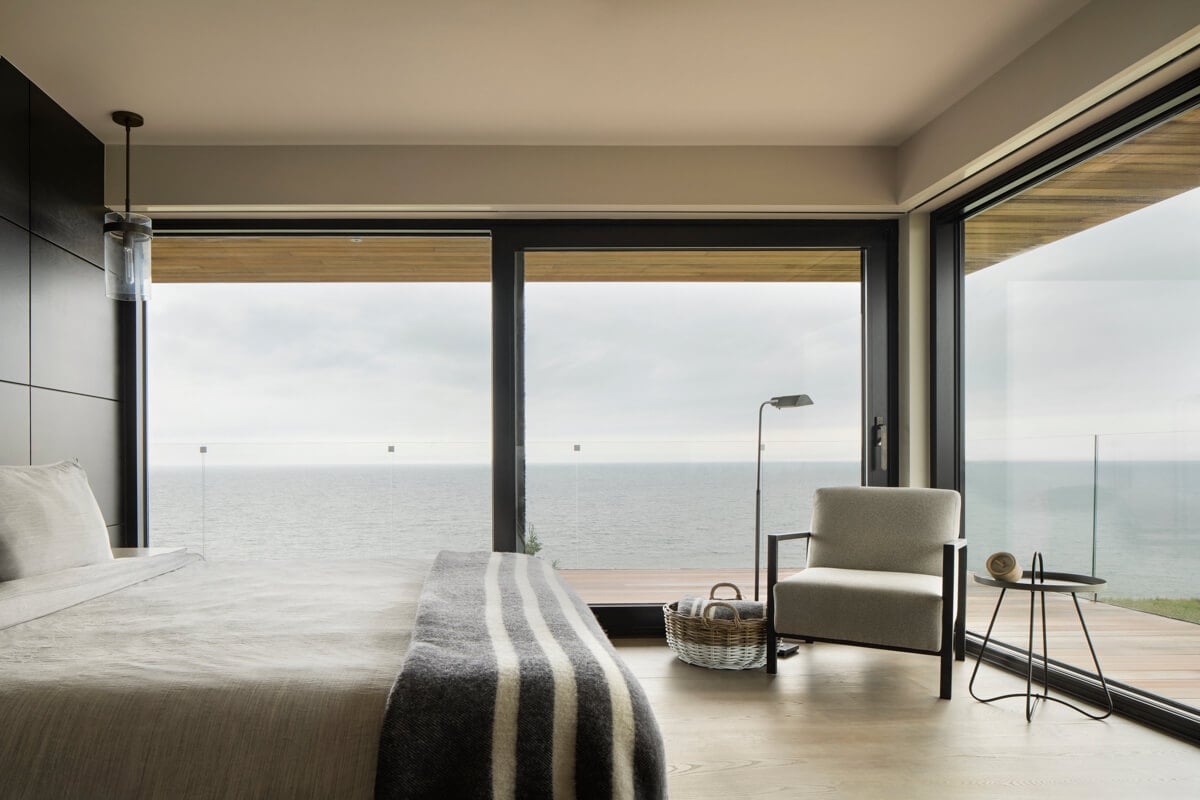 The second-floor master bedroom appears to float over the seascape outside, highlighting the home’s earth-meets-sky dynamic.

Duality not only defines the relationship between each level, but creates a rich transition between the roadside and water-facing elevations as well. Visitors arrive to see sparse window openings, especially on the cedar section. The solidity dissolves on the opposite side, with expansive glazing wrapping around all the bedrooms, which each in turn extend onto sweeping terraces. It’s the bliss point for any weary urban visitor hoping to melt their city stresses away. But they’re not the only patios. One end of the second storey shelters a semi-secret outdoor area, partly hidden by a wall screen adjacent to the driveway.

On the water side of the property, the monolithic facade viewed on approach to the house dissolves into expansive glazing and a wraparound terrace off the bedrooms.

In 2020, Nine Yards won the Royal Architectural Institute of Canada’s Emerging Architectural Practice Award, one of the country’s highest honours for a new studio (Nine Yards was founded in 2017). The jury noted the quiet elegance and contextual nature of its work, as well as its sense of play. To wit, all the volumetric contrasts of the Howe Bay house are a blend of poetic and practical. The solid walls protect the structure from the prevailing winds, while the glazing carved into the volumes benefits from deep overhangs, which prevent unwanted solar heat gain at the height of summer and allow for passive solar heat gain mid-winter. 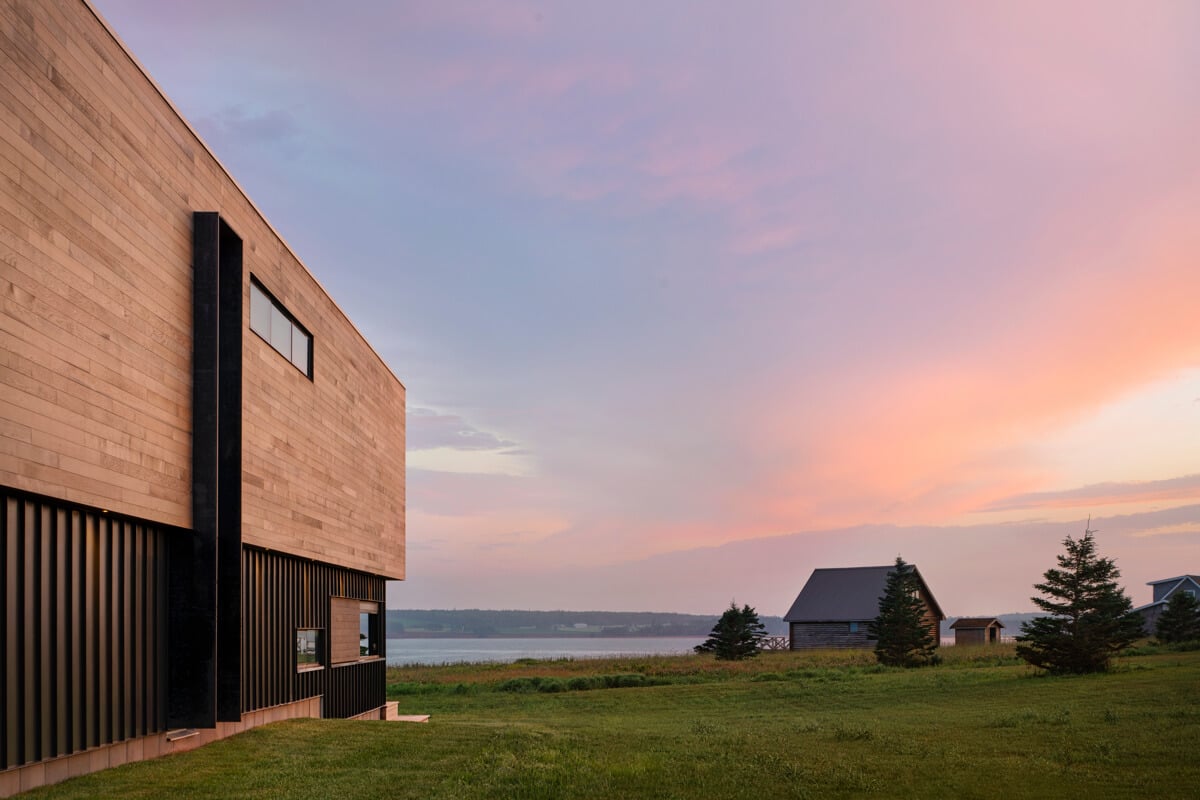 “As architects, we do a lot of site analysis,” says Stojak. “We are careful to consider the light, the winds, the views. Here, all the winds come from the north and the best views face south, so the home has an ideal orientation.” 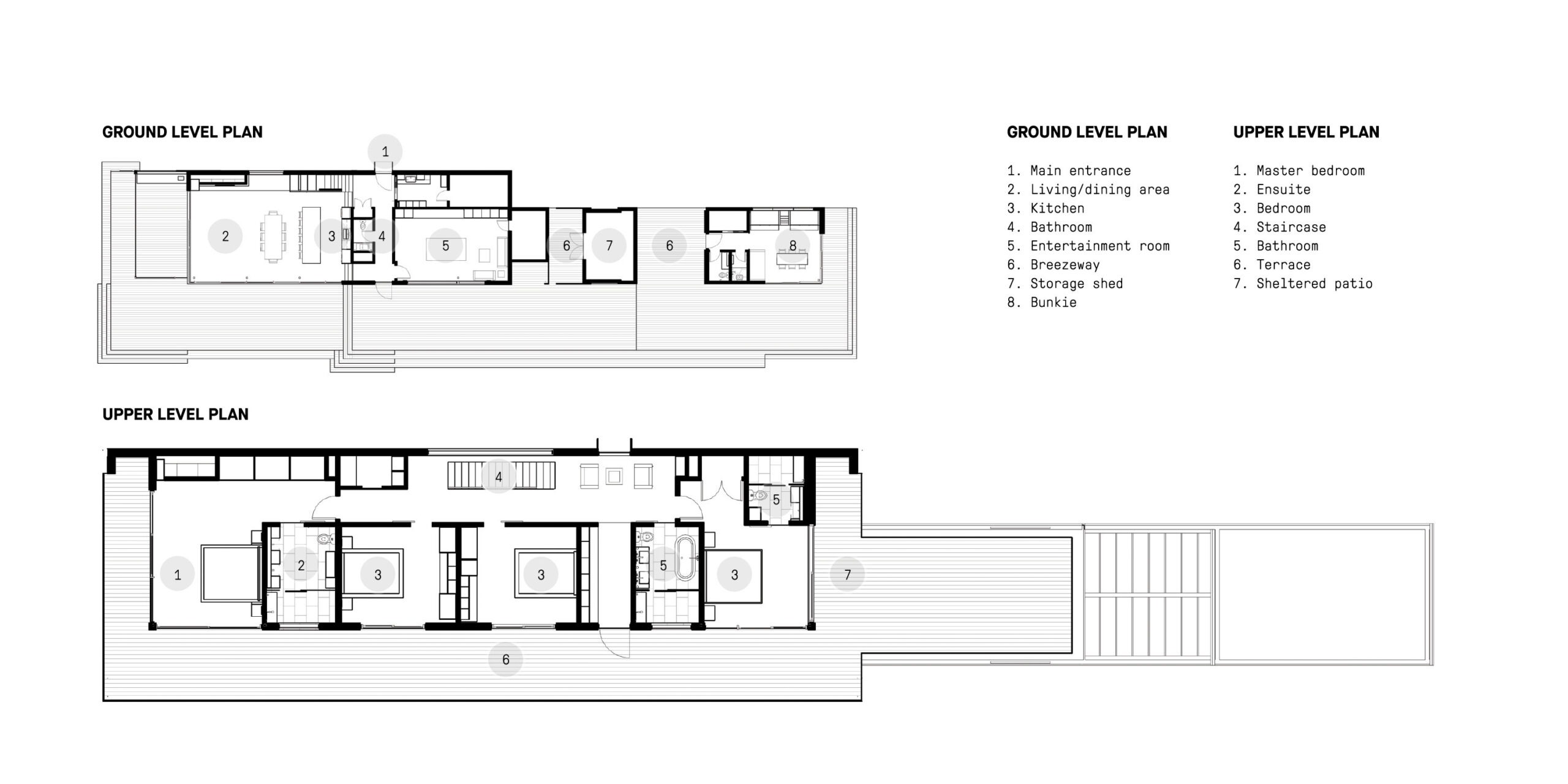 Stretching like a brushstroke across the rural landscape, a low-lying vacation property by the Charlottetown-based studio provides discreet yet expansive refuge for a big-city family.