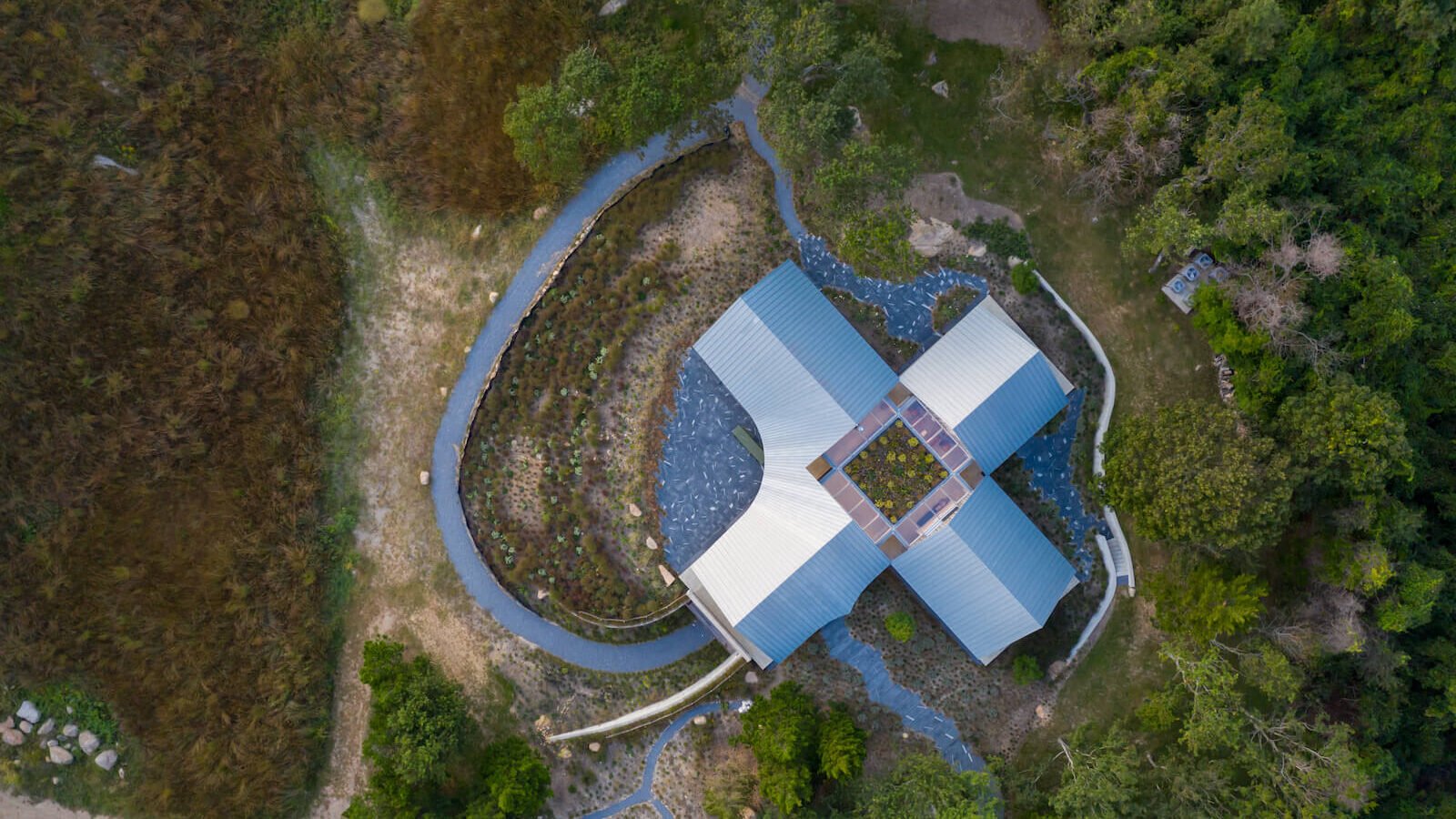 On Long Island, SO – IL Lays a Cross Down on the Landscape

Each of the four wings in the striking cruciform house serves a different function and takes in different views.

When married filmmakers Dana Ben-Ari and Nikola Duravcevic bought eight hectares of pristine waterfront property on the North Fork of New York’s Long Island, they dreamed of embarking on a design journey that would be as imaginative as working on a motion picture. “Like any creative project,” says Duravcevic, “it’s about the process. It isn’t just the finished product that matters.”

Not coincidentally, the couple had skilled collaborators at the ready. Among their closest friends are Florian Idenburg and Jing Liu, the married founders of Brooklyn-based architecture studio SO – IL. Both couples have children of about the same age, and they frequently vacation together. After Ben-Ari and Duravcevic purchased the windswept lot, their weekend plans centred on walking the land together and contemplating the best place to build.

This image and top: Skylights and a green roof top the nexus of SO – IL’s first new house designed from the ground up. The “omnidirectional” home was completed with Shenton Architects.

“When you’re there, you really feel like you’re away from everything, because you come through this wooded area and arrive on top of a bluff that drops down to the Long Island Sound,” says Idenburg. “And the sun sets into the sea, so it’s really, really beautiful.”

Looking to take full advantage of the varied site conditions — the forest, the grasses, the beach and the water — he and Liu conceived a building with a cruciform plan, with the four different wings, connected by a central common area, serving different purposes and taking in different views. “A crucifix comes with religious connotations,” says Idenburg. “But it was not about the form or even the graphic of that form. The idea was that it would really be omnidirectional, and have all these different relationships to the site.” 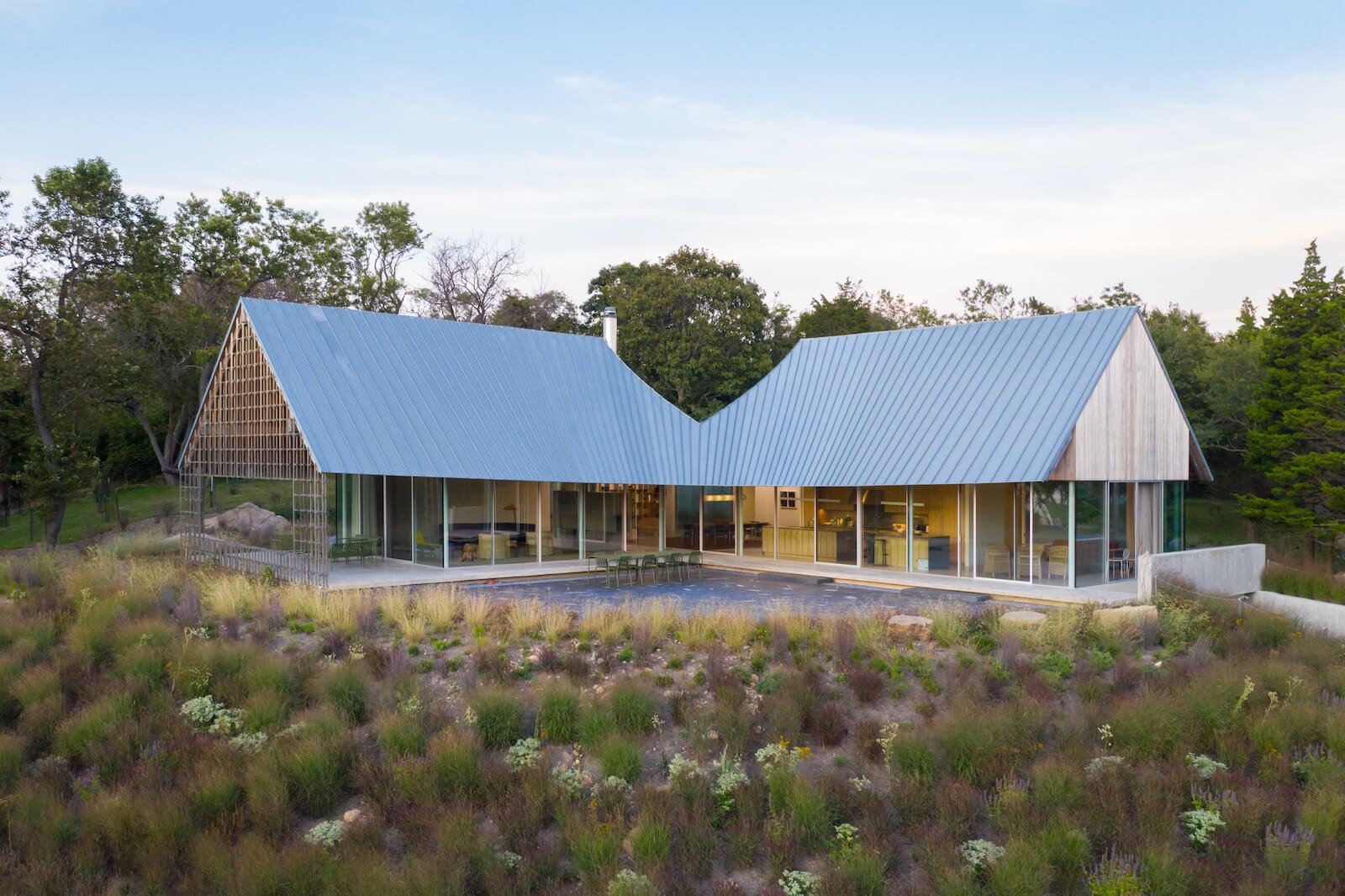 Each of the house’s wings, which are capped by gabled zinc roofs, has a distinct role: kitchen, living room, master suite, bedrooms.

To amplify the connection to the plot’s natural features, SO – IL borrowed from Japanese architecture and added an engawa — a strip of outdoor flooring that sits at the same level as the floor inside and runs around the entire structure for easy indoor–outdoor living. “Both the floor and the roof extend to create this in-between space between the interior and the exterior,” Idenburg explains, “all the way around.”

In a couple of key areas, the cruciform plan is broken by curves. On one side of the 600-square-metre house, the corrugated stainless-steel cladding peels back to reveal the main entrance door, which is made of vertical cedar slats. Where the kitchen wing meets the living room wing at a corner, the gabled volumes swoop together with a curvaceous standing-seam zinc roof to provide greater protection for the engawa and terrace below.

In addition to zinc, cladding materials include cedar slats and corrugated steel. The curved area at left houses the entryway.

A dining room and library are positioned at the centre of the house, where the four wings intersect; they are ringed by skylights and topped by a green roof. Where the living room meets the outdoors, a stainless-steel lattice supports an extended section of roof and frames the view to the water.

The project is the first entirely new house designed by SO – IL, a firm better known for its work on cultural institutions like the Manetti Shrem Museum of Art at the University of California, Davis. Well aware that building a custom house is a deeply personal undertaking fraught with pitfalls, the architects and their clients engaged Carl Shenton of Shenton Architects to lead the construction of the project after the initial vision was set. 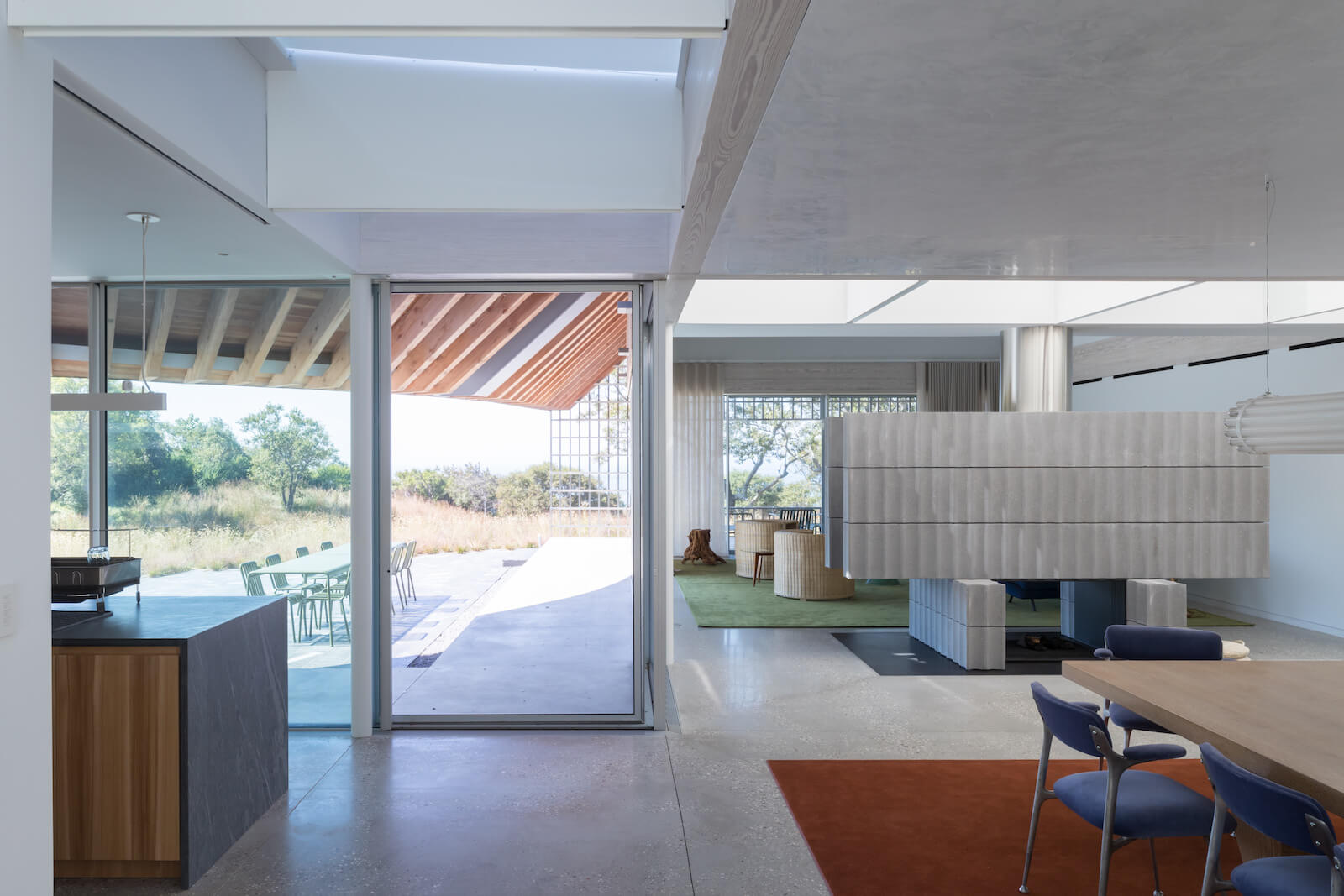 Dividing the living room from a dining area at the structure’s centre is a grand concrete fireplace designed by the homeowner and his brother.

“I said, ‘I don’t want you to build this house, because I want to stay friends,’” recalls Duravcevic, who also took the lead on completing the interiors, a job for which he enlisted the help of his brother, contemporary artist Aleksandar Duravcevic. Their masterwork is a double-sided fluted concrete fireplace that dominates one end of the living room and is decidedly brutalist in style. The brothers grew up in the former Yugoslavia, “so we wanted to do this homage to that socialist utopia,” says Nikola. “It’s just a part of who we are.”

The peaked roofs swoop together at the juncture of the living room and kitchen wings, forming a curvaceous canopy over a terrace and the engawa that surrounds the home.

Although the homeowners (plus Nikola’s brother) undertook most of the interiors themselves, they also recruited the Brooklyn- and L.A.-based studio Charlap Hyman & Herrero to assist with finishing touches and accessories. For the outdoor spaces, they hired landscape designer Patrick Cullina, the former vice-president of horticulture for New York City’s High Line. As all of these partnerships show, Duravcevic and Ben-Ari clearly relish collaborating with designers — and in fact he is currently at work on an enormous credenza for the house with furniture designer Jonathan Nesci. “We were fortunate to be able to work with so many very talented people,” says Duravcevic. “It has been a labour of love, to put it mildly.”

Each of the four wings in the striking cruciform house serves a different function and takes in different views.