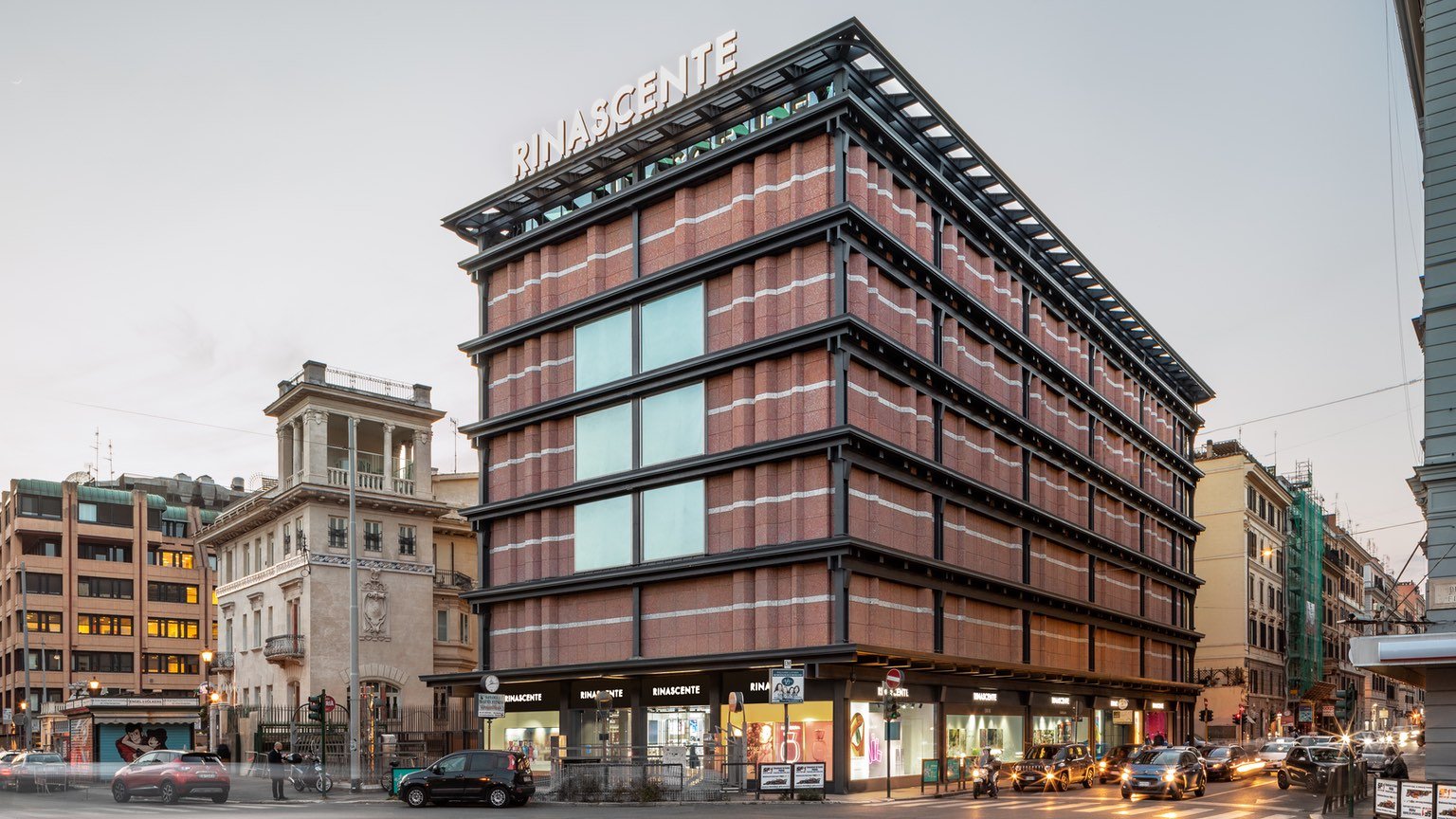 Long a key local landmark, Rome’s La Rinascente department store has been quietly refreshed to better engage with its surroundings — and its customers.

With holiday shopping season in full swing, it’s an especially interesting time of year to consider the ongoing evolution of bricks-and-mortar retail. And when it comes to department stores, it’s clear that there is no one-size-fits-all path forward, as the disconnect between mass-market retailers in suburban malls and high-end fashion meccas in traditional city centres continues to grow.

Many downtown department stores have a distinct advantage, given they are often located in landmark buildings that serve as unique architectural attractions in their own right. Brands that effectively harness their historic identity are able to provide a shopping experience defined as much by spectacle as it is by product selection. One shining example is La Rinascente in Rome, which recently underwent a renovation by local firm 2050+. A testament to the appeal of experiential retail, the end result is a perfect demonstration of how a department store can maintain its relevance well into the 21st century. 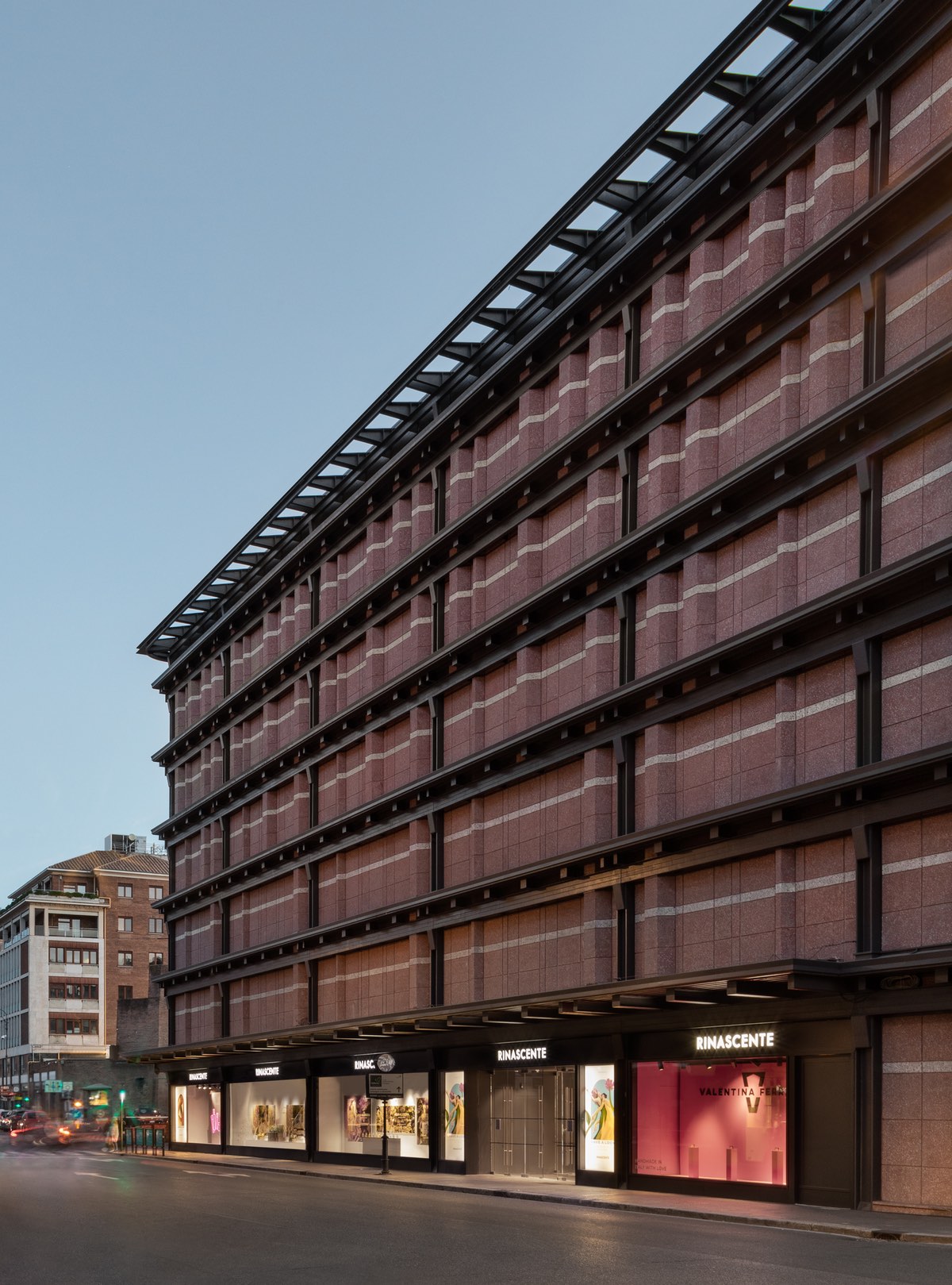 Designed by mid-century modernists Franco Albini and Franca Helg and opened in 1961, La Rinascente’s facade was originally conceived as a playful riff on traditional Italian architecture. The cement and granite mixture used for the building’s cladding panels mirrors nearby stone structures, while linear ridges evoke Renaissance columns — albeit ones interrupted by bands of modern steel. 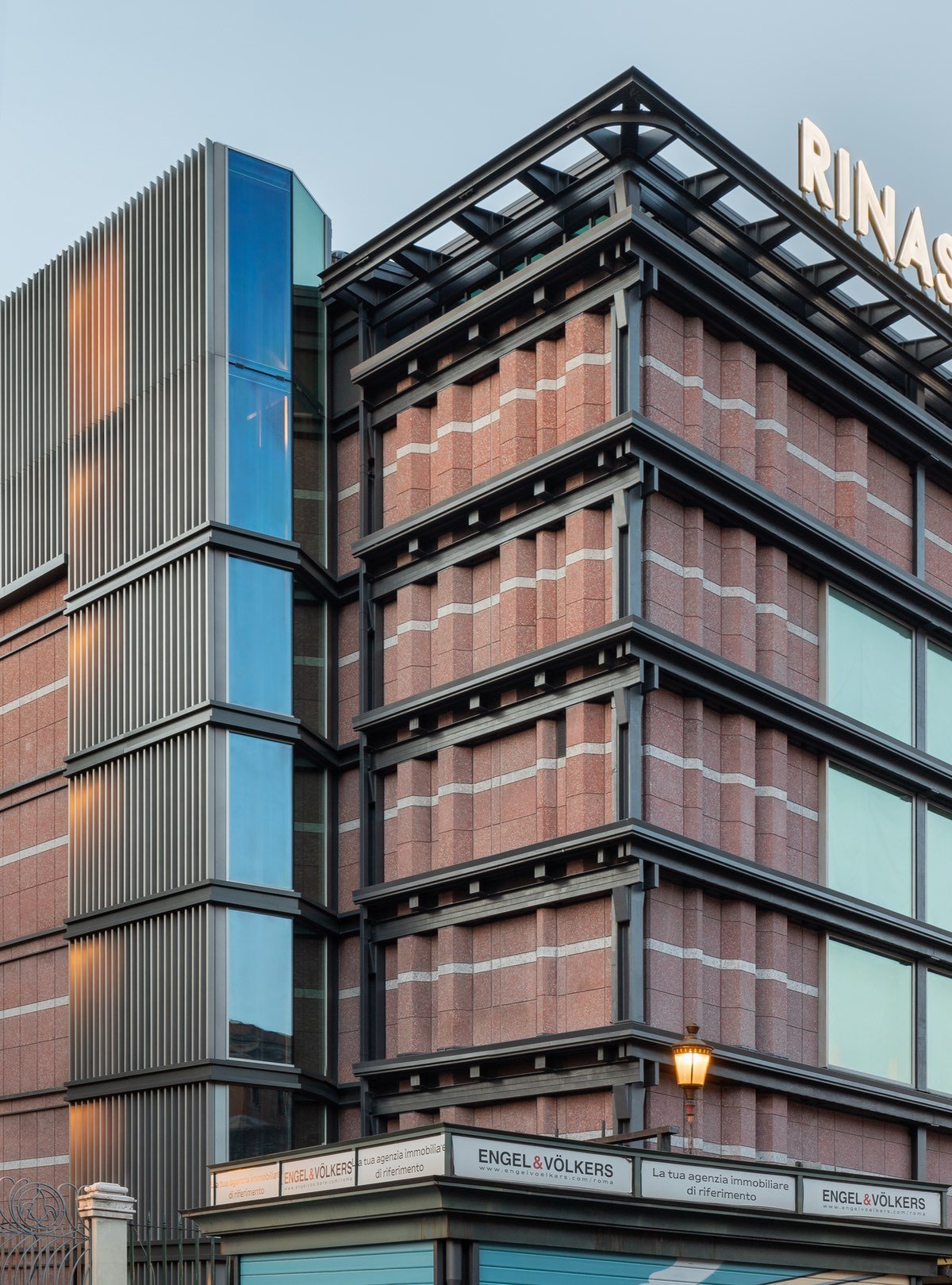 But apart from winking at its neighbours, Albini and Helg’s façade also sought to offer a sense of the activity playing out inside. The building’s courtyard elevation was originally designed to provide a clear view of the store’s inner buzz, prominently framing the interior escalators. But during past renovations, these windows were replaced with a more opaque glass. 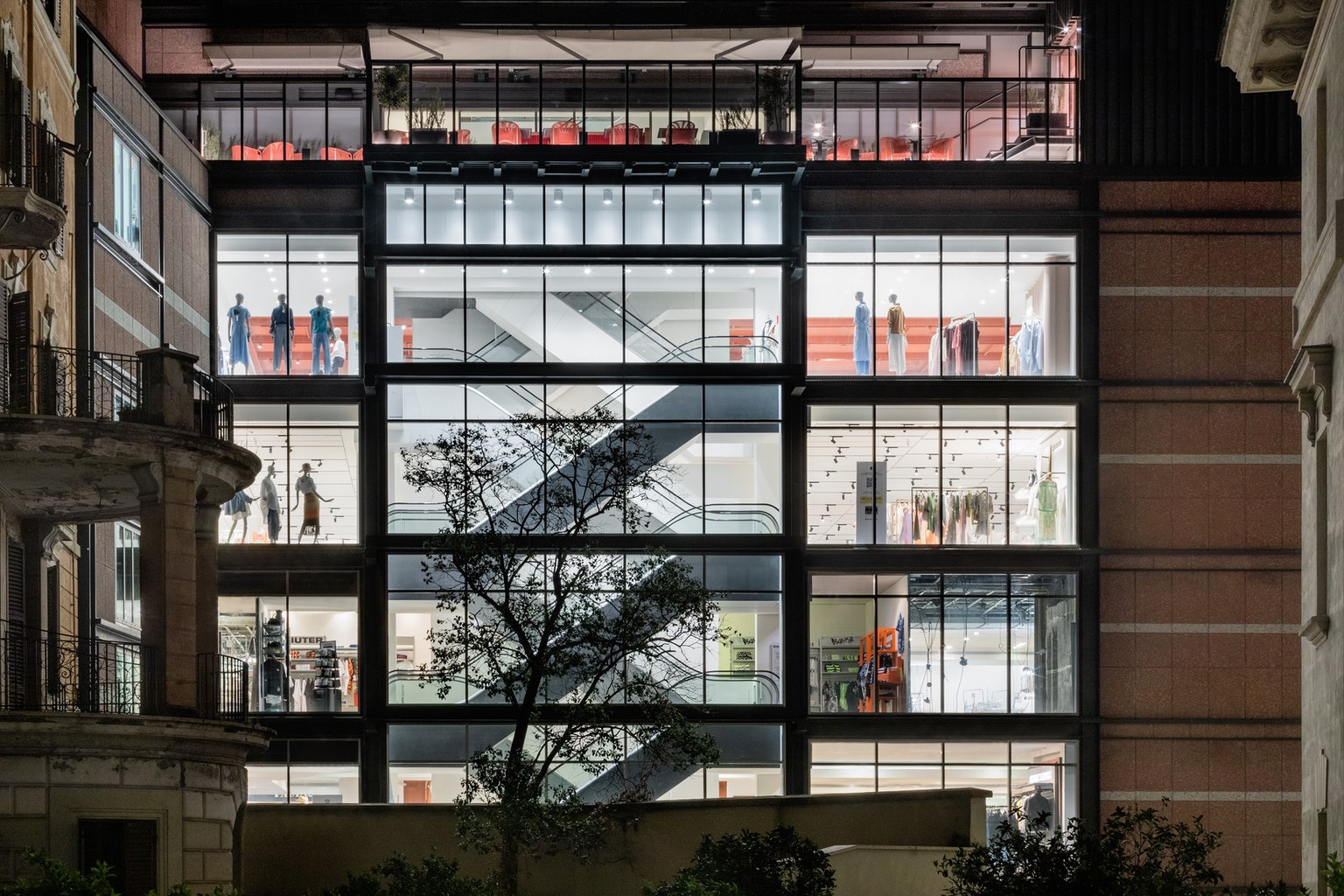 Thankfully, this year’s strategic restoration and rethink by 2050+ restores the building’s original sense of transparency, installing new windows that help La Rinascente to better engage with its surrounding streetscape. Meanwhile, a new panoramic elevator bay — closely modelled on the design of a planned car lift that Albini and Helg had designed for a never-realized rooftop parking lot — now helps to make internal circulation more accessible and more experiential. 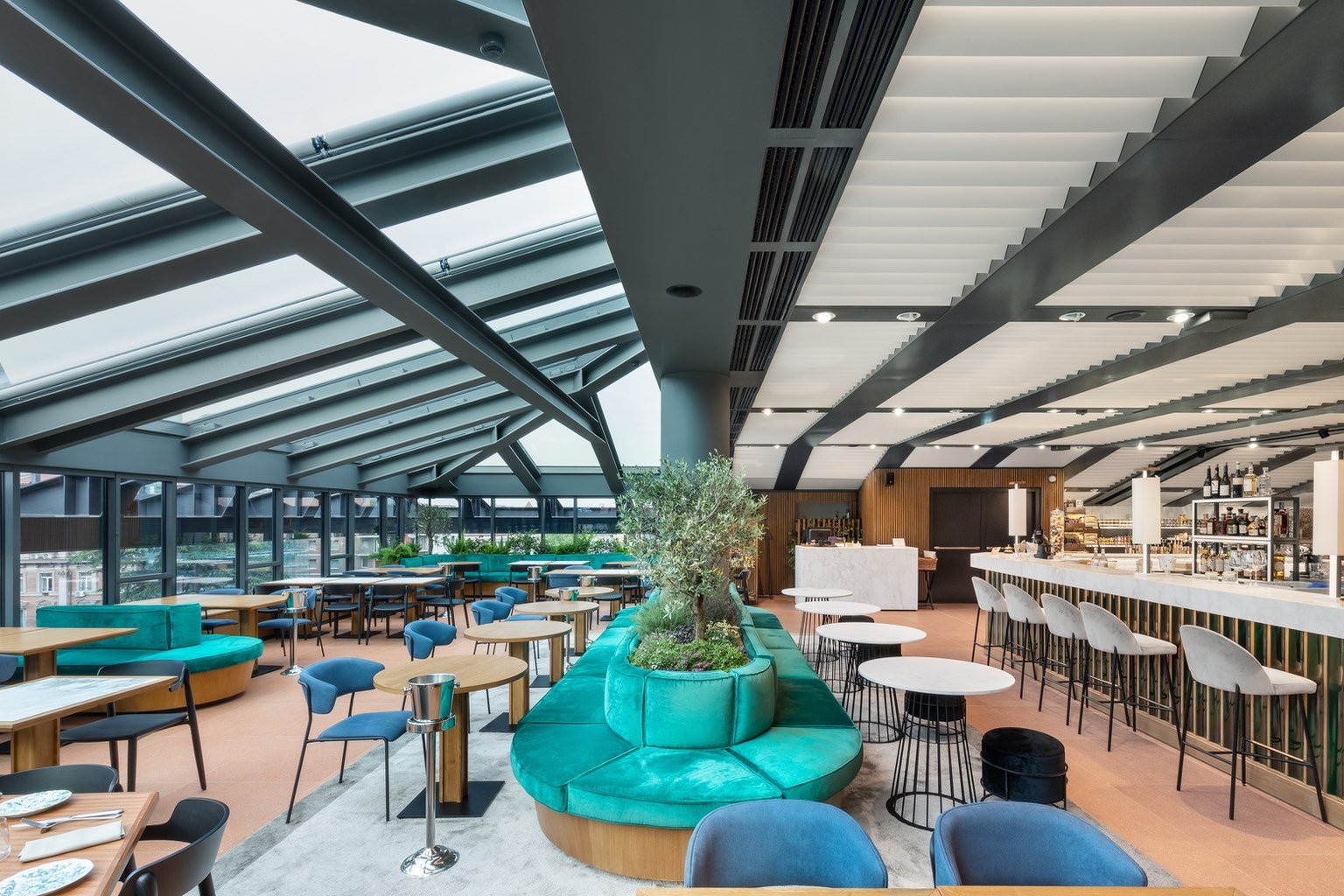 This sense of openness is buoyed by the store’s fresh sixth floor, topped by a new glass roof that offers expansive city views that look out to the Aurelian City Walls across the street. As a result, La Rinascente’s restaurant (as well as the adjoining food hall) now feels like a true destination dining spot. 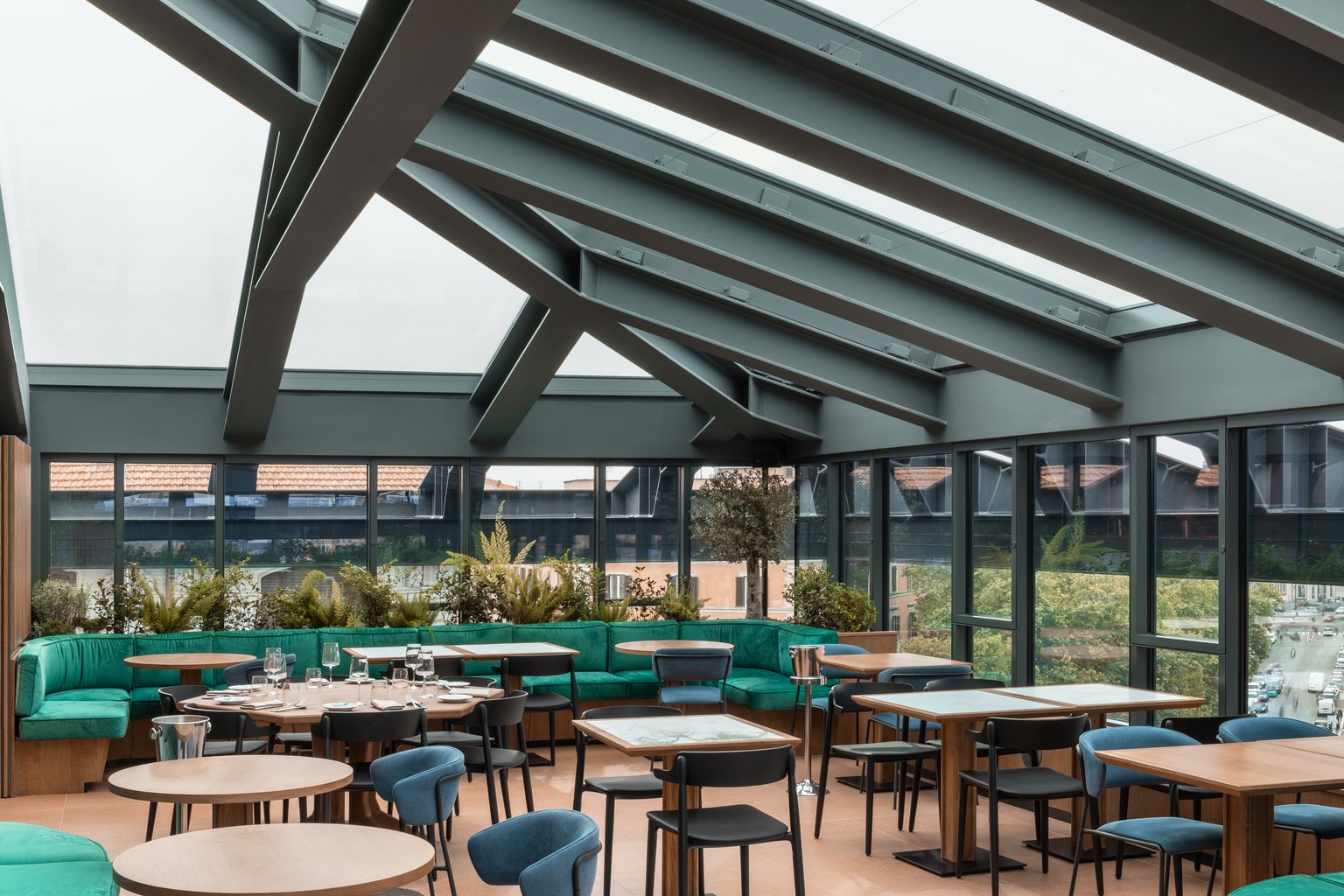 Plush velvet seating picks up on the verdant tones of the room’s planters to give the space the feel of a greenhouse. The latest example of retail merging with the hospitality sector, the restaurant is a reminder that shopping is at its most enjoyable when it’s recognized as an experience, not a chore. Further renovations slated to occur next year on the store’s lower levels will only add to the department store’s appeal. 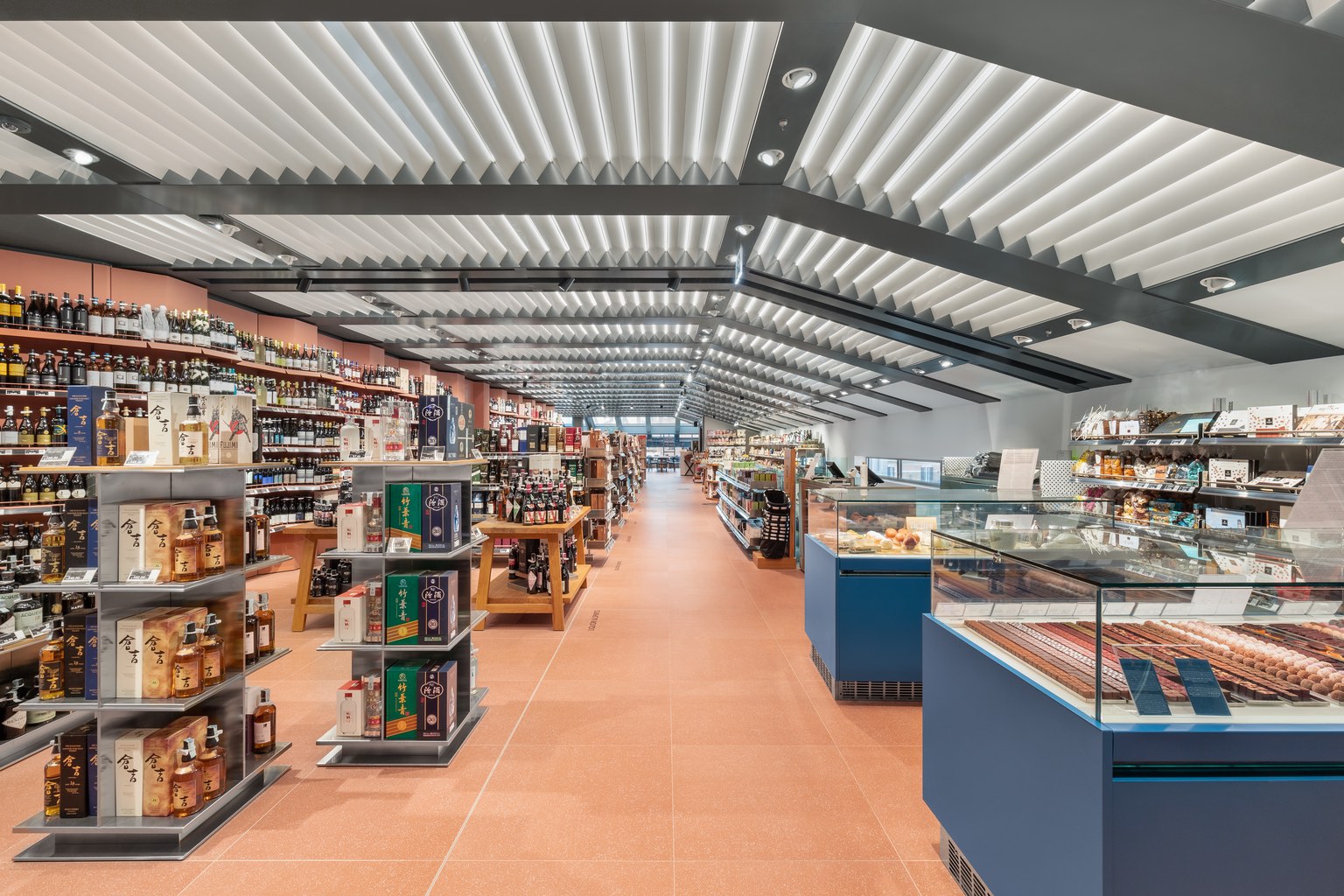 Indeed, while La Rinascente operates several locations across Italy, it is clear that it understands the best overall strategy is to tailor each one to its individual context. For other chains, it’s a lesson about the value of playing up a store’s unique identity. In the process, the best department stores will manage to achieve something that the internet simply can’t: a real sense of place.

Long a key local landmark, Rome’s La Rinascente department store has been quietly refreshed to better engage with its surroundings — and its customers.