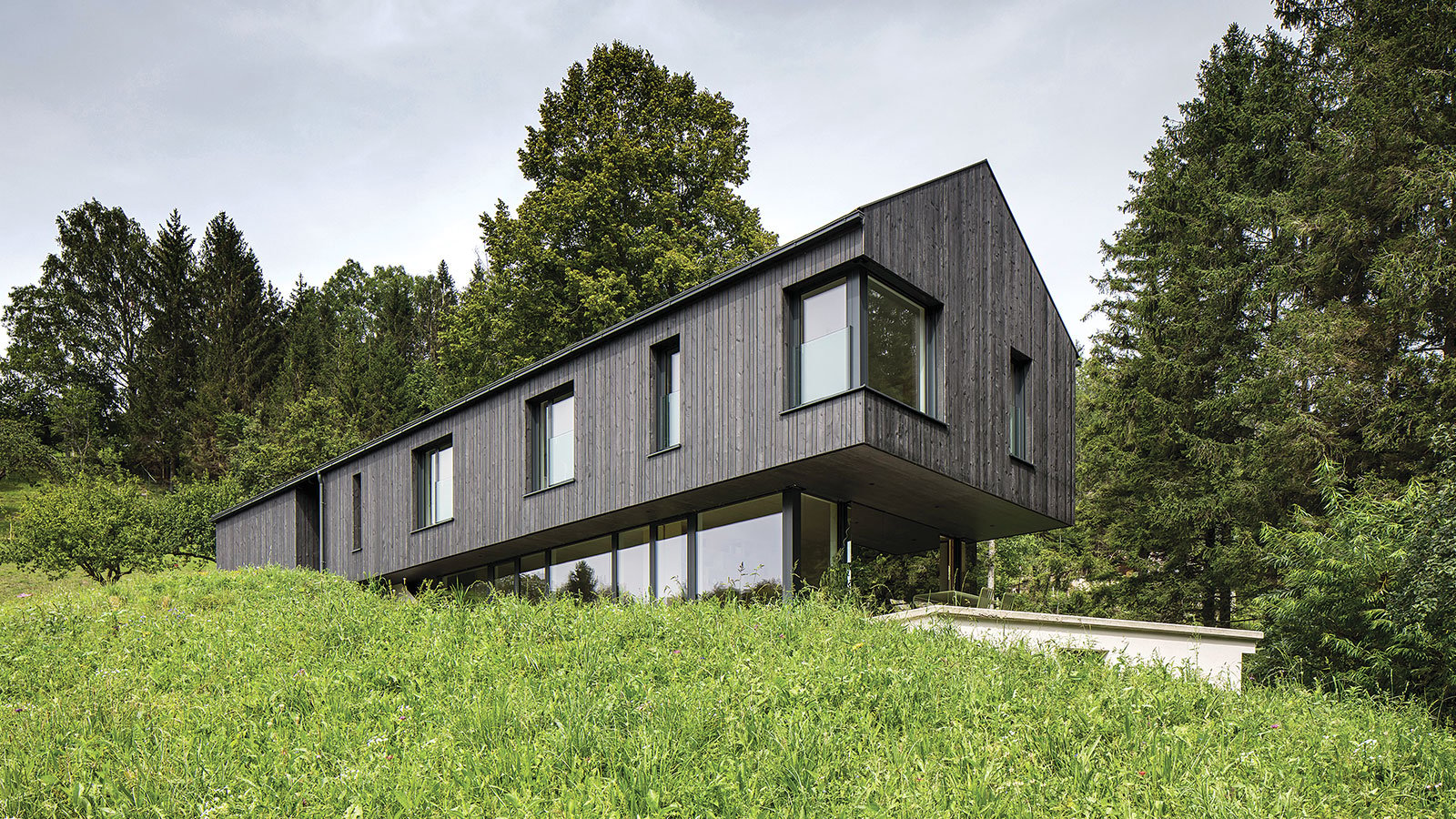 No matter where you sit, stand or walk, this high-altitude home by Berlin-based architect Sigurd Larsen offers a feast for the eyes. He made sure of it.

In Austrian homes, the kitchen is king, its eckbank — or corner bench — an essential element. “It often feels,” says Danish architect Sigurd Larsen, “as if guests never really make it further” than this room.

With the Mountain House, Larsen’s inaugural project in Austria and his first in an Alpine setting, he and his team tried to emphasize the centrality of this social hub, situating it where the cantilevering house meets the slope of the hillside plot. “We really wanted [the homeowners] to be able to experience the slope from inside the house as well,” says Larsen, whose practice, Sigurd Larsen Design & Architecture, is located in Berlin. Next to the all-important corner bench, a staircase follows the incline of the landscape and highlights the home’s through-line view of its dramatic environs. “It gives you the feeling of walking directly on the hill,” says the architect.

Even a built-in desk at the top of the staircase offers impeccable views, the window above it installed strategically at eye level.

Built for two local teachers who are expecting their first child, the 180-square-metre house is located high above a valley in the town of Oberschlierbach, about 115 kilometres northeast of Salzburg. Designed to highlight multiple vistas, it also provides direct access to the surrounding meadow. The upper part of the house, where both the main entrance and the bedrooms are situated, appears to float atop a transparent lower level, which contains the centrally situated kitchen, a living room on one side and a utility room with a work desk on the other. A lone terrace sits on an existing concrete base (formerly the foundation of a grandmother’s hut) at the end of the house, leaving the north and south sides completely unobstructed. “From the kitchen,” says Larsen, “you can basically open a double door and run directly out into the big green meadow.” 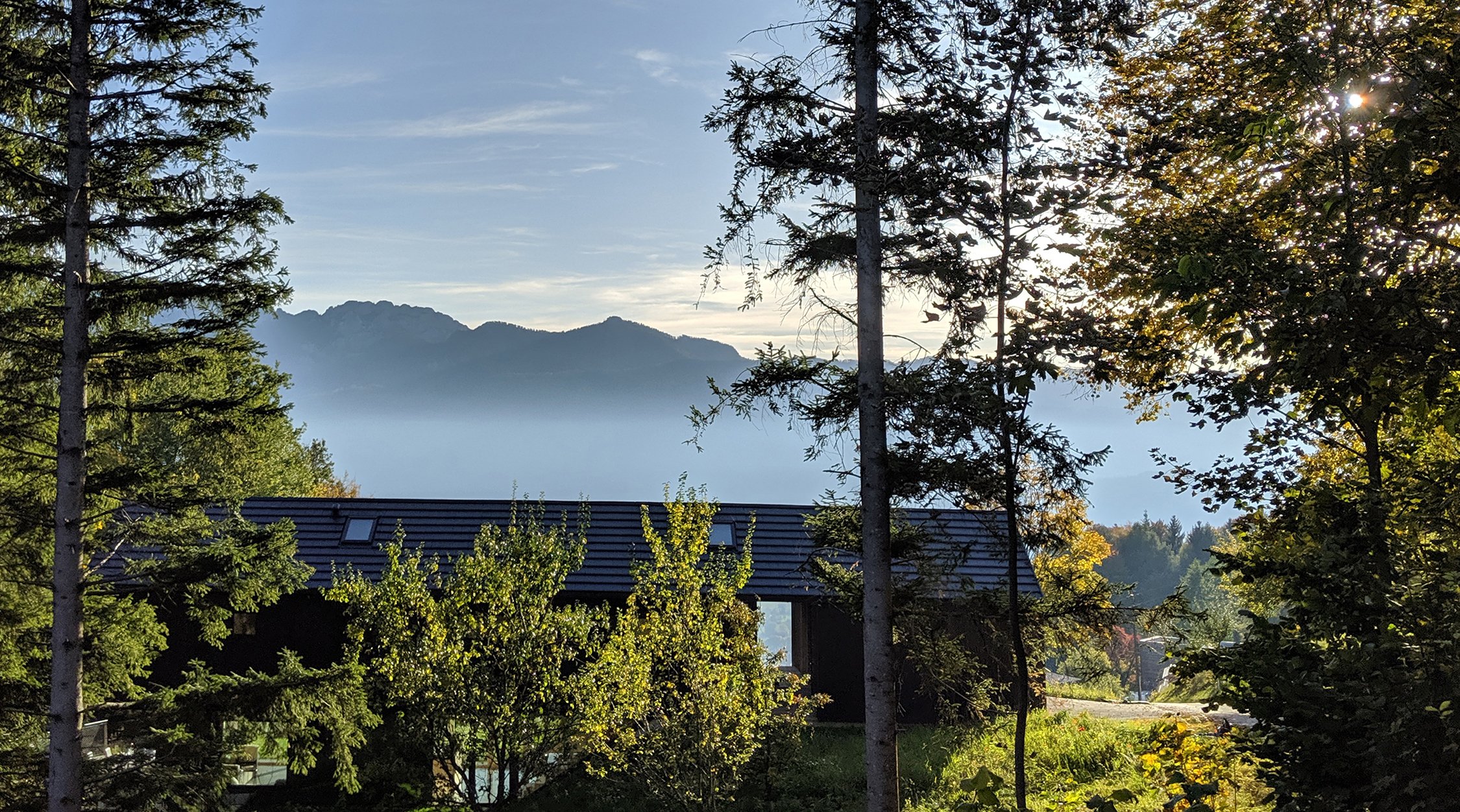 Despite its dramatic appearance, the home is well-integrated into its site, which features dense forest on two sides.

Featuring a pine interior and a larch exterior, the long, narrow building was built with cross-laminated timber. Comparing CLT to concrete slabs, Larsen says that the former was a more effective lighter-weight alternative (and a nicer-smelling one) for the pitched-roofed home’s cantilevered design. It was also a holistic choice, as the area’s carpenters have had centuries of experience working with wood. In this case, they were able to easily transport the building materials through the winding, narrow streets of the small village below the house, which occupies a 4,000-square-metre plot close to 800 metres above sea level.

Clad in larch, the upper part of the house seems to hover over its glass base, punctuated at one end by a terrace.

A floor-to-ceiling aperture at the primary entrance provides postcard vistas of the surrounding mountains.

At the main entrance, a covered corridor stretches the width of the upper level, offering picture-perfect views of the Alps through a floor-to-ceiling aperture. Inside the home, the vistas are just as prominent. When people are seated, they get framed views of the sky and mountain peaks. When they’re walking through the house, they glimpse panoramas of the valley. Outside, swathes of the forest are reflected in mirrored glass on the home’s north side and at the terrace. “No matter which side of the terrace’s table you’re sitting at,” says Larsen, “you can see the forest, either directly or in the reflection.” 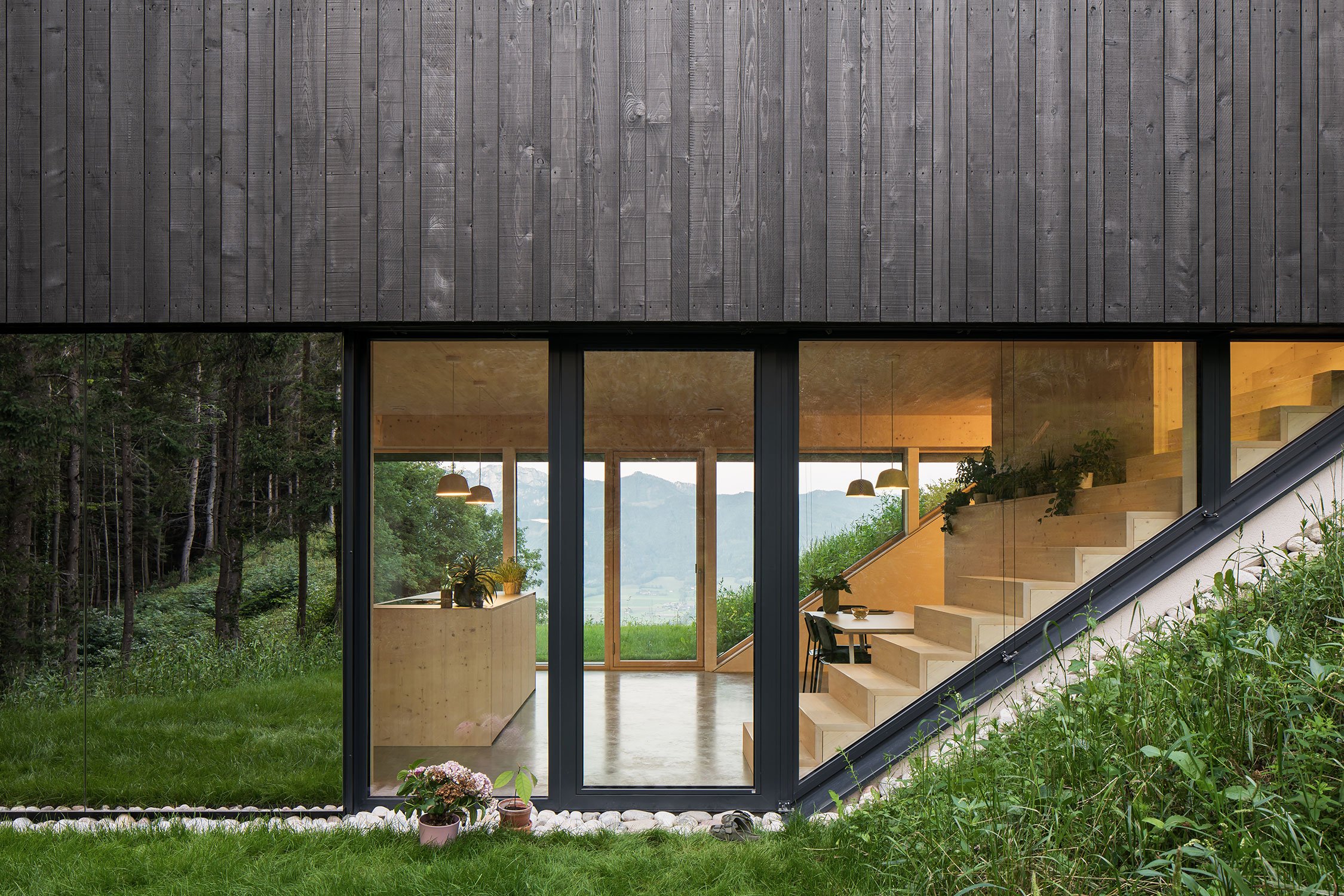 In his design for this Alpine aerie, Danish architect Sigurd Larsen situated the kitchen — the hub of Austrian homes — where the house formally meets the hillside. 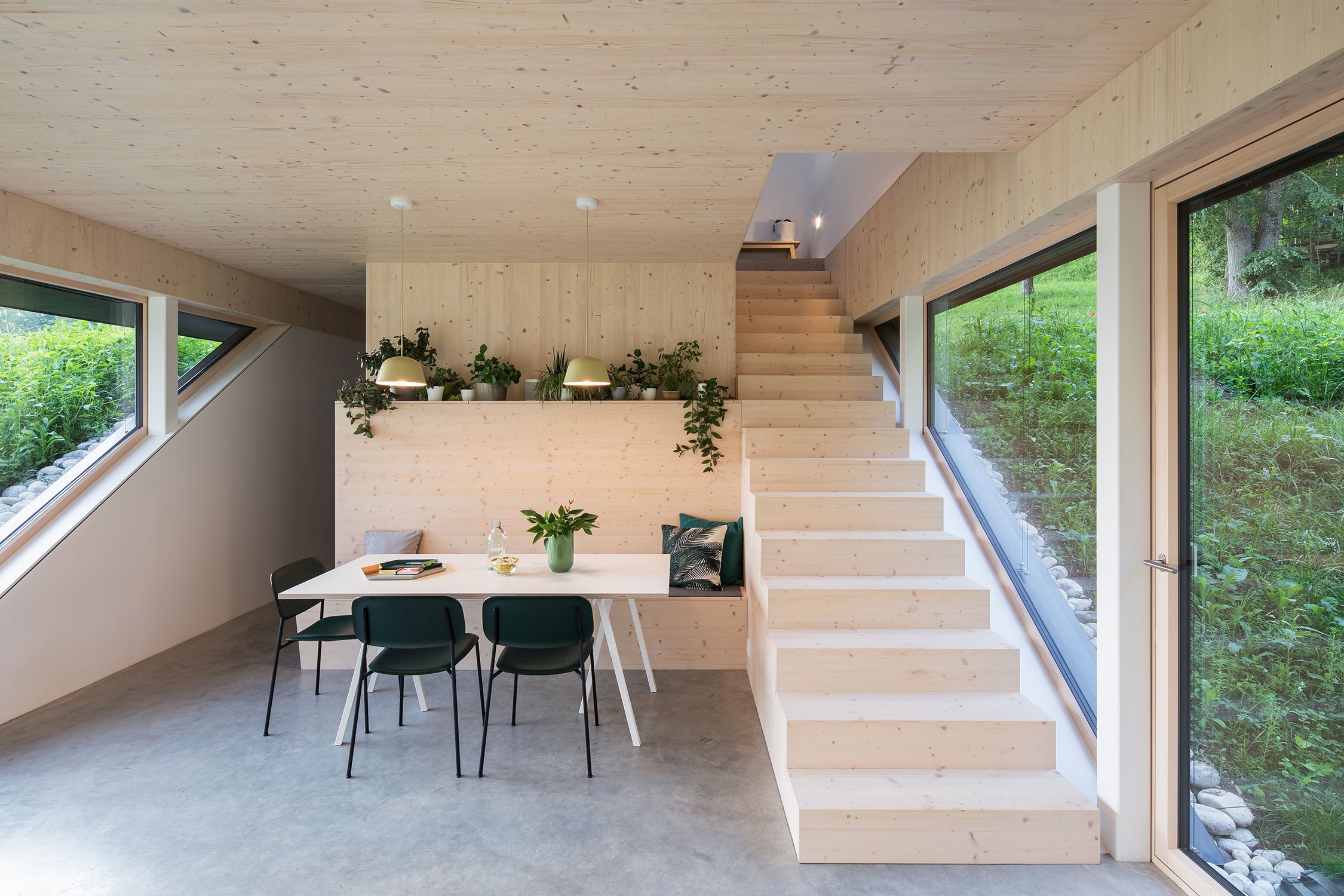 Inside, a central staircase links an upper level, which houses the main entry and sleeping quarters, with living and utility rooms below. 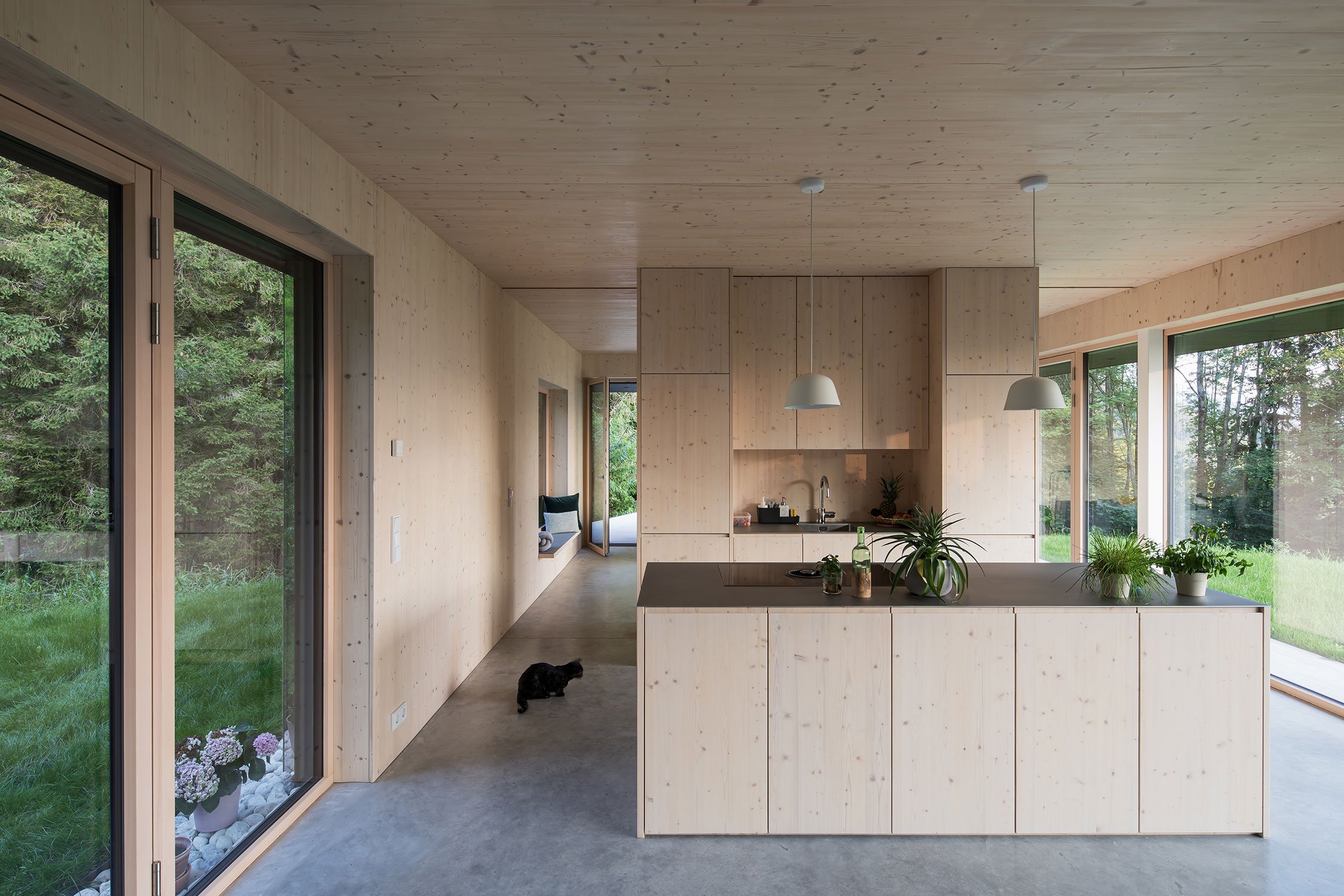 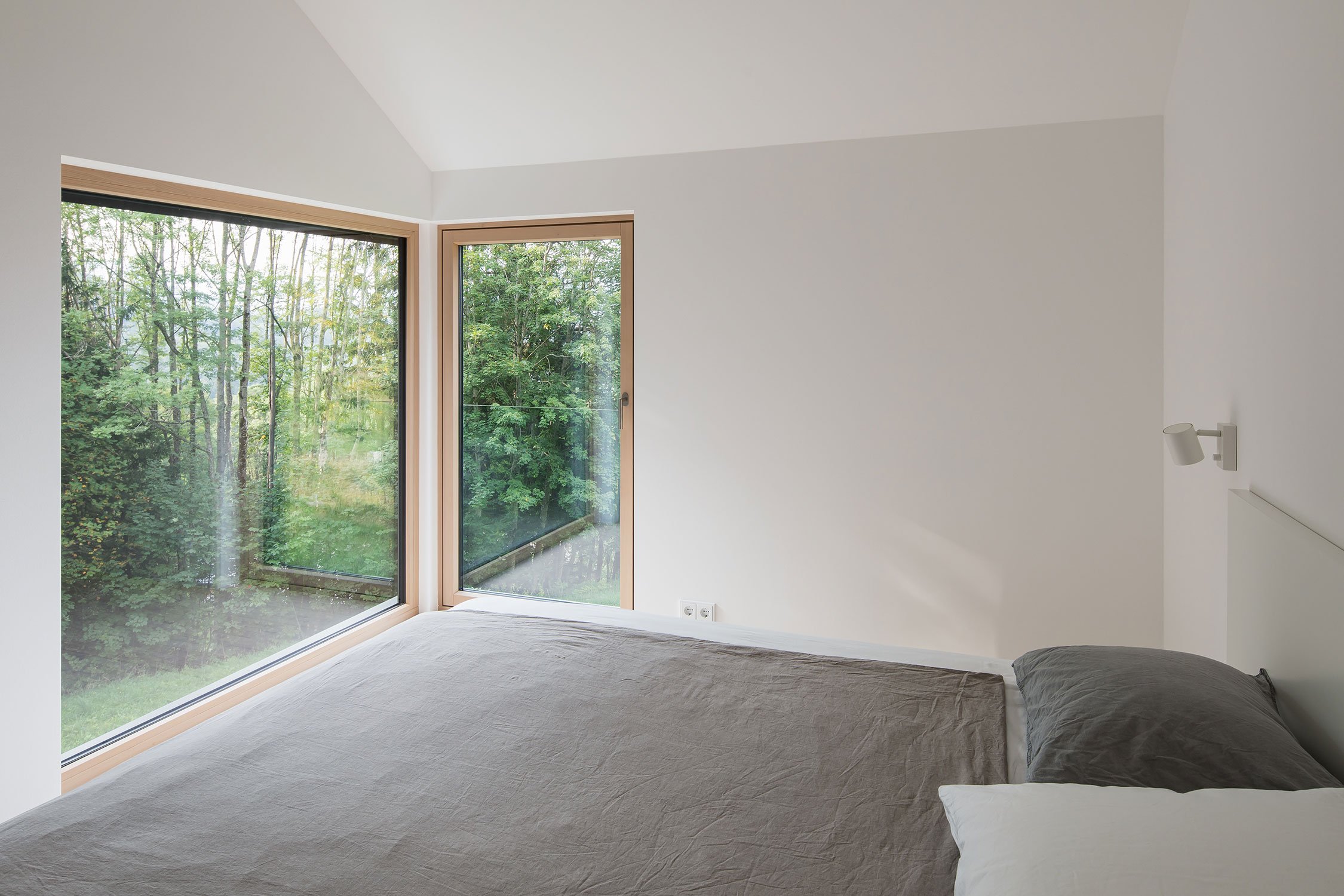 The high-ceilinged bedrooms on the top floor are distinguished by the slopes and inclines of the home’s saddle roof.

As in a typical Austrian home, however, the young owners and their guests will likely be taking in the scenery from the kitchen, where freestanding walls function as furniture and room dividers and the large picture windows show just how melded with its setting the residence is. Here, house becomes hill and inside becomes outside, each merging harmoniously with the other.

No matter where you sit, stand or walk, this high-altitude home by Berlin-based architect Sigurd Larsen offers a feast for the eyes. He made sure of it.