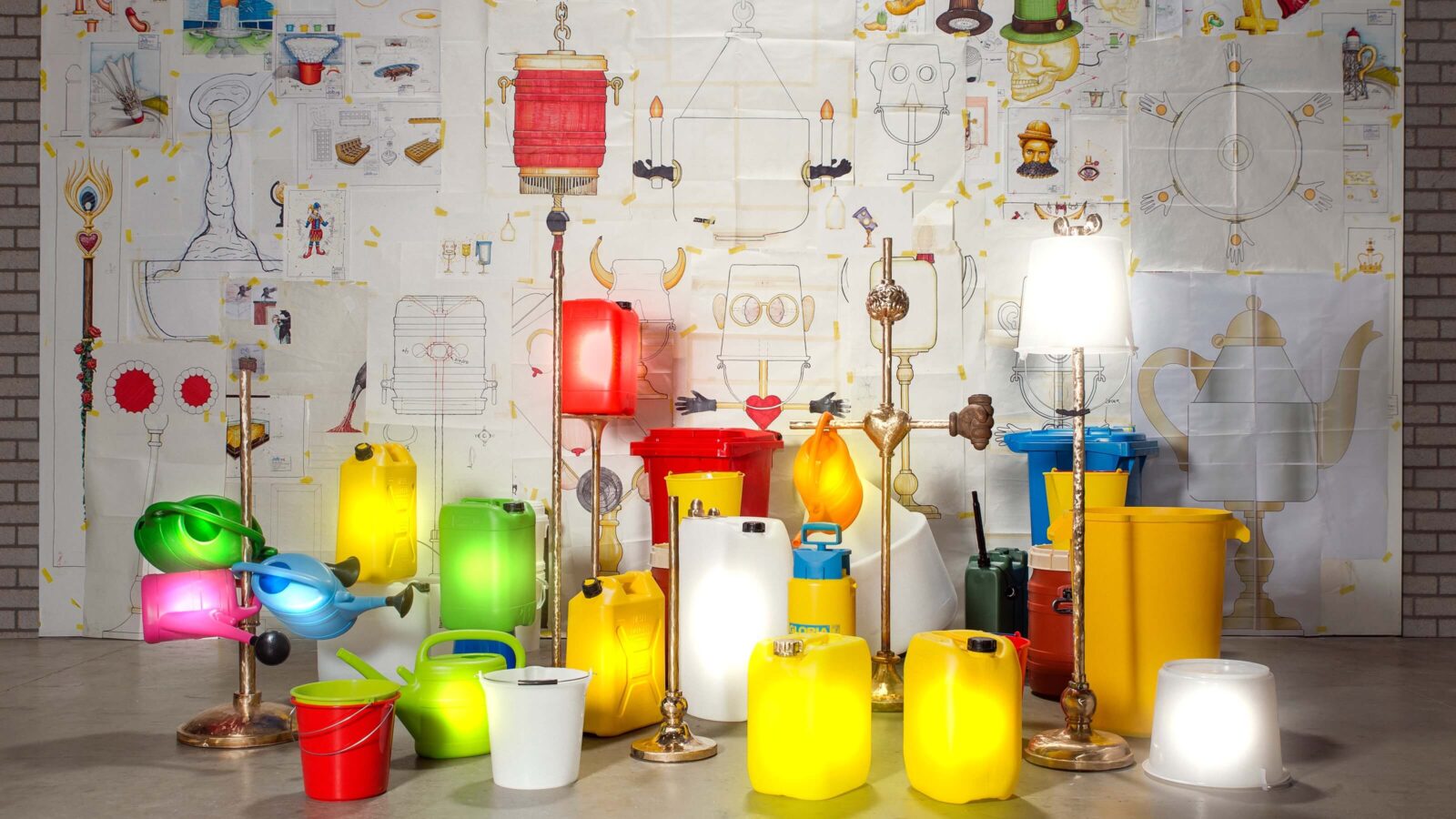 The Future of Plastic

From bio-based alternatives to creative recycling, how designers and manufacturers worldwide are rethinking a problematic material.

When Milan-based Rossana Orlandi launched the inaugural Ro Plastic Prize last year, she challenged the design community to rethink its relationship with plastic. The renowned Italian gallerist was seeking innovations that would transform what has become a persistent pollutant into a guiltless material — plastic that would keep on giving even after the end product no longer serves a function.

Orlandi wanted nothing short of a revolution that cast designers as a part of the solution: Their recycled plastic pieces would themselves be recyclable, keeping a non-renewable and non-degrading material in a closed loop, away from parks, forests and oceans. The Substantial collection, Alexander Schul’s winning entry in the design category, comprises a chair, lamp and table made of recycled polystyrene, demonstrating a new use for a type of plastic that is rarely accepted by recycling facilities.

How successful the award was in terms of real change depends on whom you ask, but, at the very least, Orlandi’s project served to raise the design world’s awareness of the massive problem plastic waste has become. Of all the plastic produced since 1950, only about nine per cent has been recycled, with 91 per cent being sent to garbage dumps or carried by the wind into waterways and oceans. 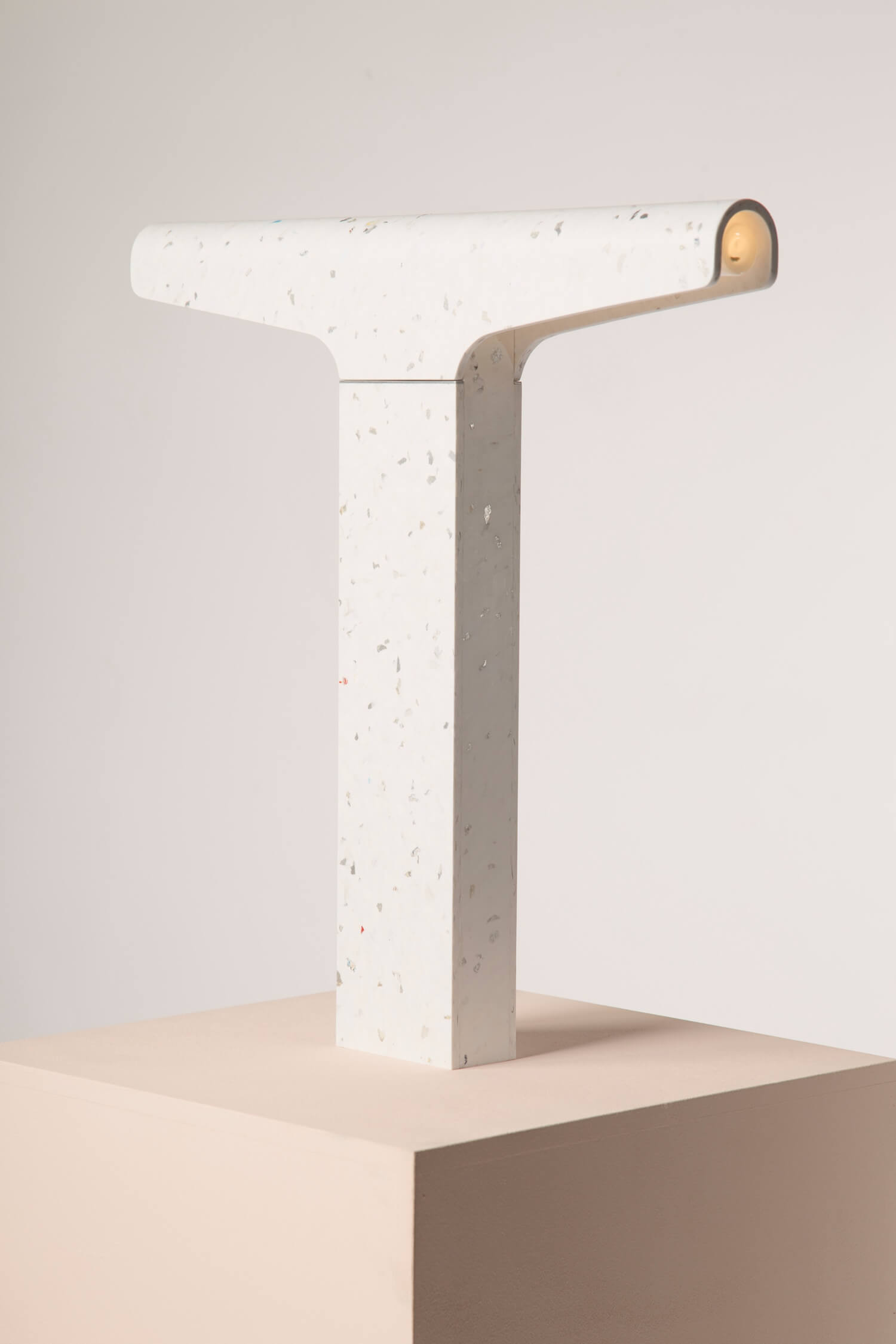 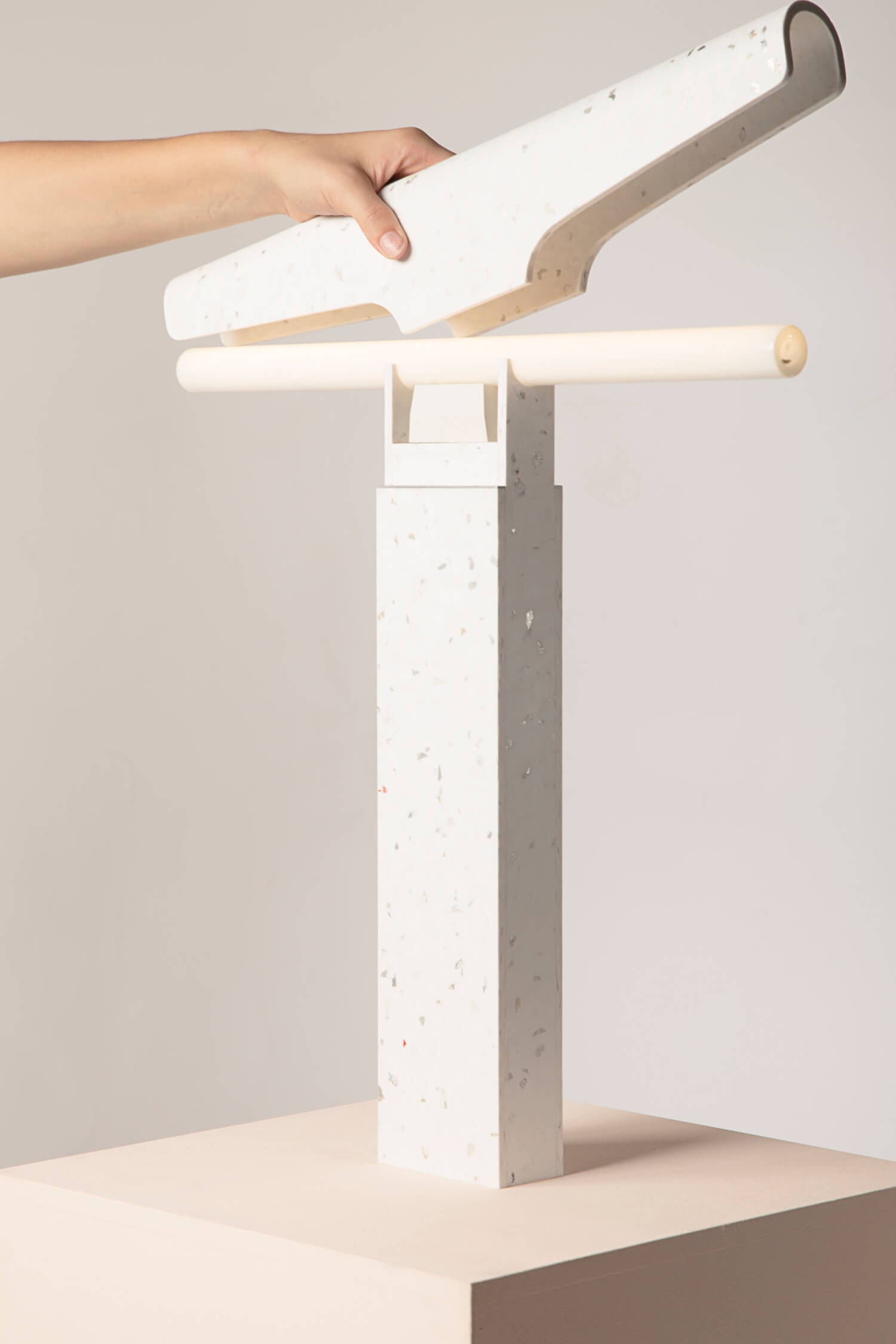 By placing the designer in a change-maker role in the growing circular economy, Orlandi made the plastic-prize competitors reconsider the type of plastic they reached for and how they used it. This move toward closed-loop thinking reflects a slowly growing change in attitudes among various furniture manufacturers and carpet makers, who have started taking steps to reduce their dependence on virgin plastic made from petroleum by using either resins derived from recycled plastic or biopolymers made from renewable resources, such as algae or corn. 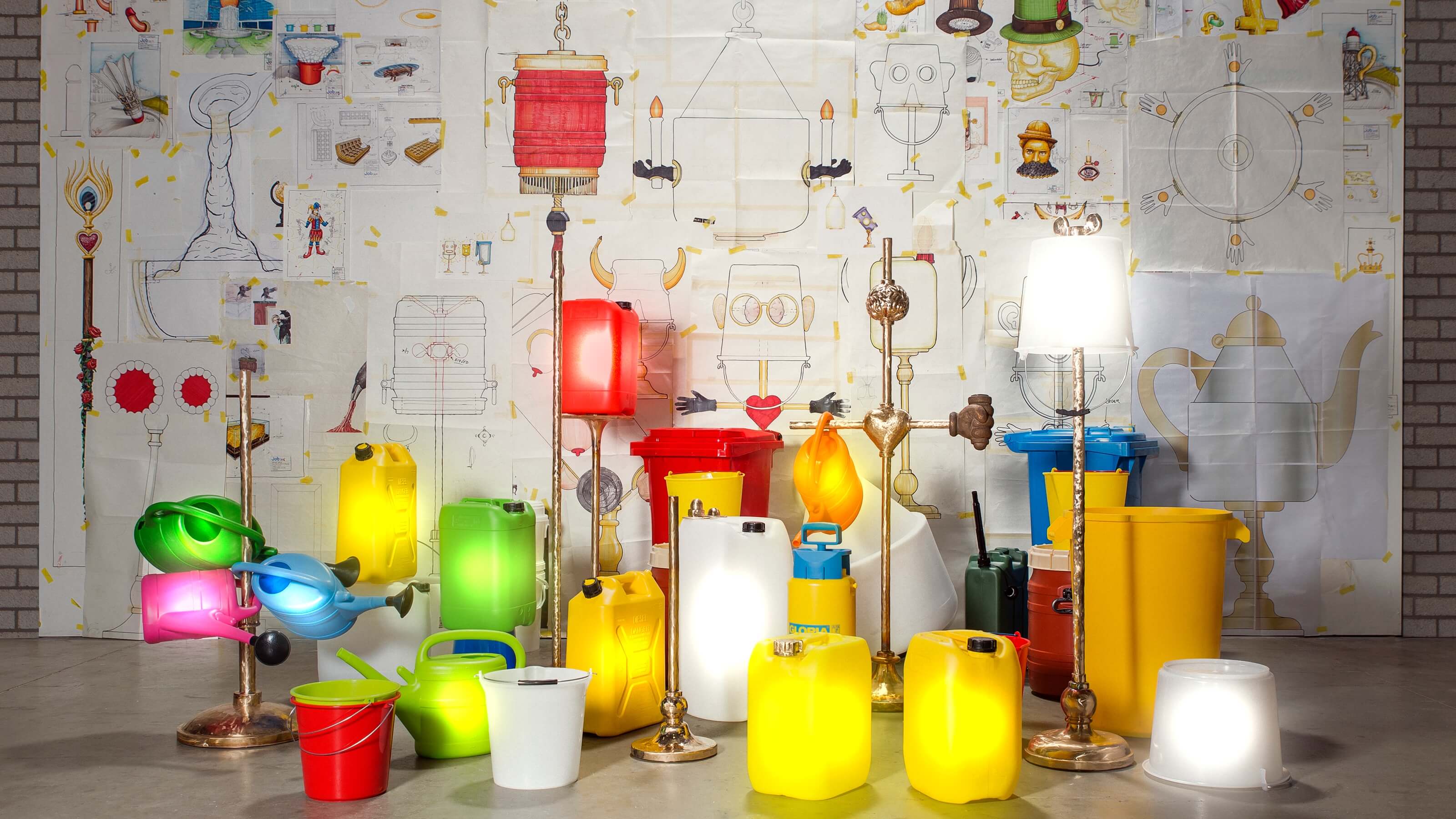 But is guiltless plastic possible? Gregg Buchbinder, the CEO of Emeco — a company whose business ethos is built on recycling aluminum and, for the past 14 years, plastic into chairs — is sanguine. “The recycling idea is good,” he says. “That’s why Emeco started working with recycled plastic back in 2006. But it takes time.” The plastic version of Emeco’s 1006 Navy chair went through four years of research, engineering and testing before its 2010 launch. Its On & On stackable chair, a Barber Osgerby design that was launched in Milan last year, likewise went through several revisions before striking the right mix of slenderness and strength. “The tooling is so costly,” says Buchbinder, “that you need to make things on an industrial scale.”

In Emeco’s case, the addition of plastic to its material palette entailed the acquisition of “super expensive” machinery for injection moulding, which the company didn’t have when it was using only aluminum. “And the reality,” Buchbinder adds, “is that recycled plastic ends up being more expensive to use than virgin plastic,” in part because it takes longer to arrive at a satisfactory final product; among other factors, recycled plastic will have impurities that can lead to blemishes, and it takes energy to recycle one type of plastic and transform it into another. “So unless you’ve got a savvy, environmentally conscious consumer willing to pay for that difference in cost, it’s a tough sell.”

Every time there’s a huge rainfall in L.A., tonnes of plastic garbage are flushed into the sea. Surfing after rain is like surfing in a toilet
Gregg Buchbinder, CEO of Emeco

Still, as the planet runs out of finite resources, Buchbinder sees recycling as a way to fill that void. When Coca-Cola first approached Emeco to convert some of its PET bottles into raw material for chairs, he hesitated because he didn’t want Coke’s branding on Emeco product. Coca-Cola, however, was sincere about reducing its environmental footprint by limiting the amount of plastic that would go into landfills. To date, Emeco has redirected some 40 million PET bottles from landfills and oceans, a fact that California-based Buchbinder, who’s a surfer, appreciates. 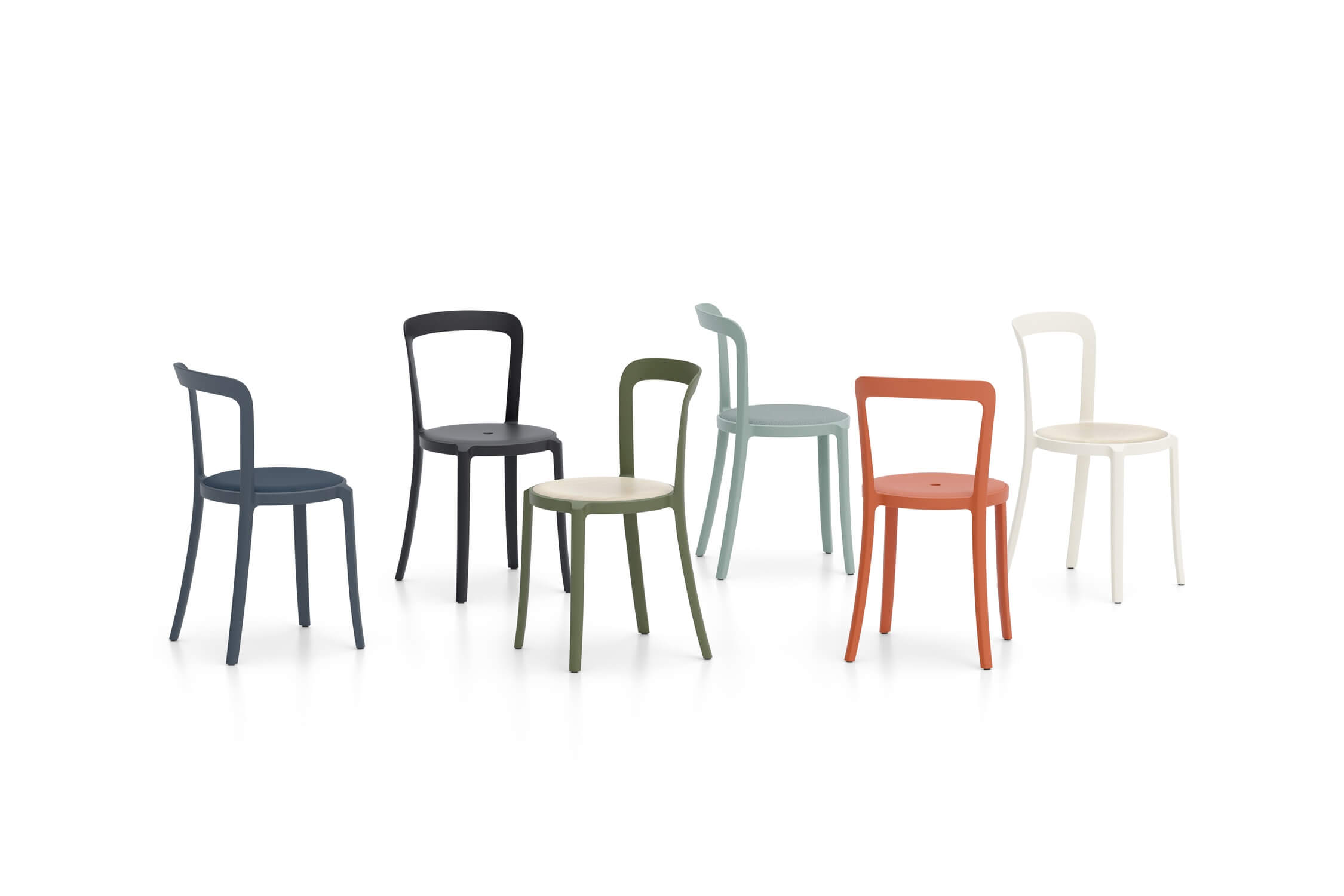 Emeco’s On & On chair is named for its core material: rPET, a recycled version of the polymer that allows the piece to be recycled again after its use.

“Every time there’s a huge rainfall in L.A., tonnes of plastic garbage are flushed into the sea. Surfing after rain is like surfing in a toilet,” he says, adding that he became concerned about ocean plastic waste when he learned about the Great Pacific Garbage Patch, a vast trash vortex of microplastic flotsam.

Eventually, he’d like to be able to incorporate ocean plastic into Emeco products — if, that is, he can find a polymer that’s strong enough. According to estimates by the United Nations Environment Programme, some eight million metric tonnes of plastic waste enter the oceans each year, much of it disposable water and soda bottles and other single-use items. A great deal of ocean plastic pollution, though, is discarded fishing nets — so-called ghost nets that keep killing fish and wildlife long after fishermen are done with them.

Bureo, an American-run, Chile-based company, aims to limit ghost fishing by transforming old, end-of-use nets into high-tensile nylon for consumer products and contract furniture. The firm, whose name means “wave” in Mapudungun, the language of South America’s Mapuche people, works directly with coastal communities to source the nets; having started in 2013 in central Chile, it expanded in 2019 to Peru and Argentina. 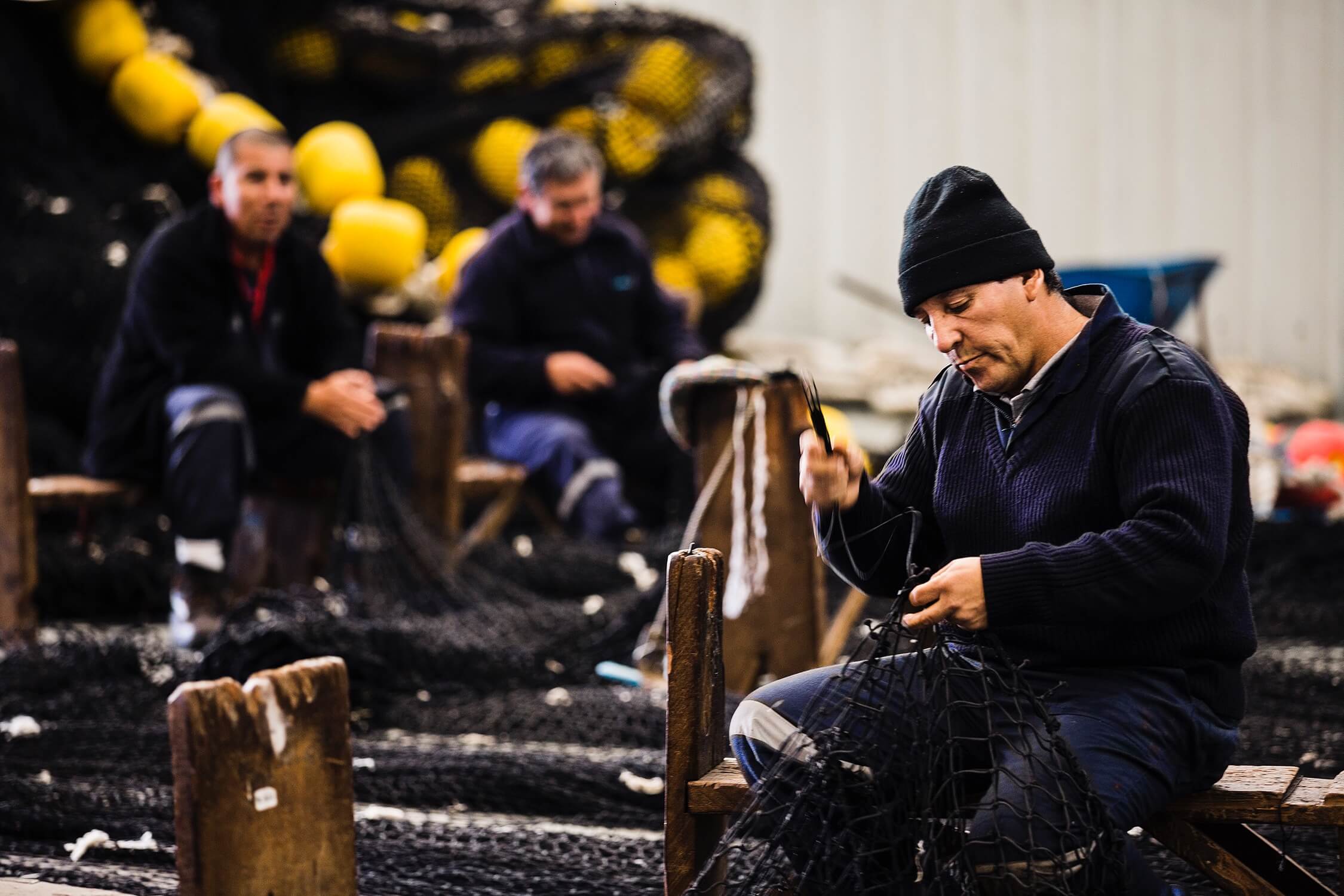 Plastics reclamation company Bureo prevents discarded nets from ending up in the ocean, instead turning them into nylon for clothing and furniture. Its clients include Patagonia and Humanscale. 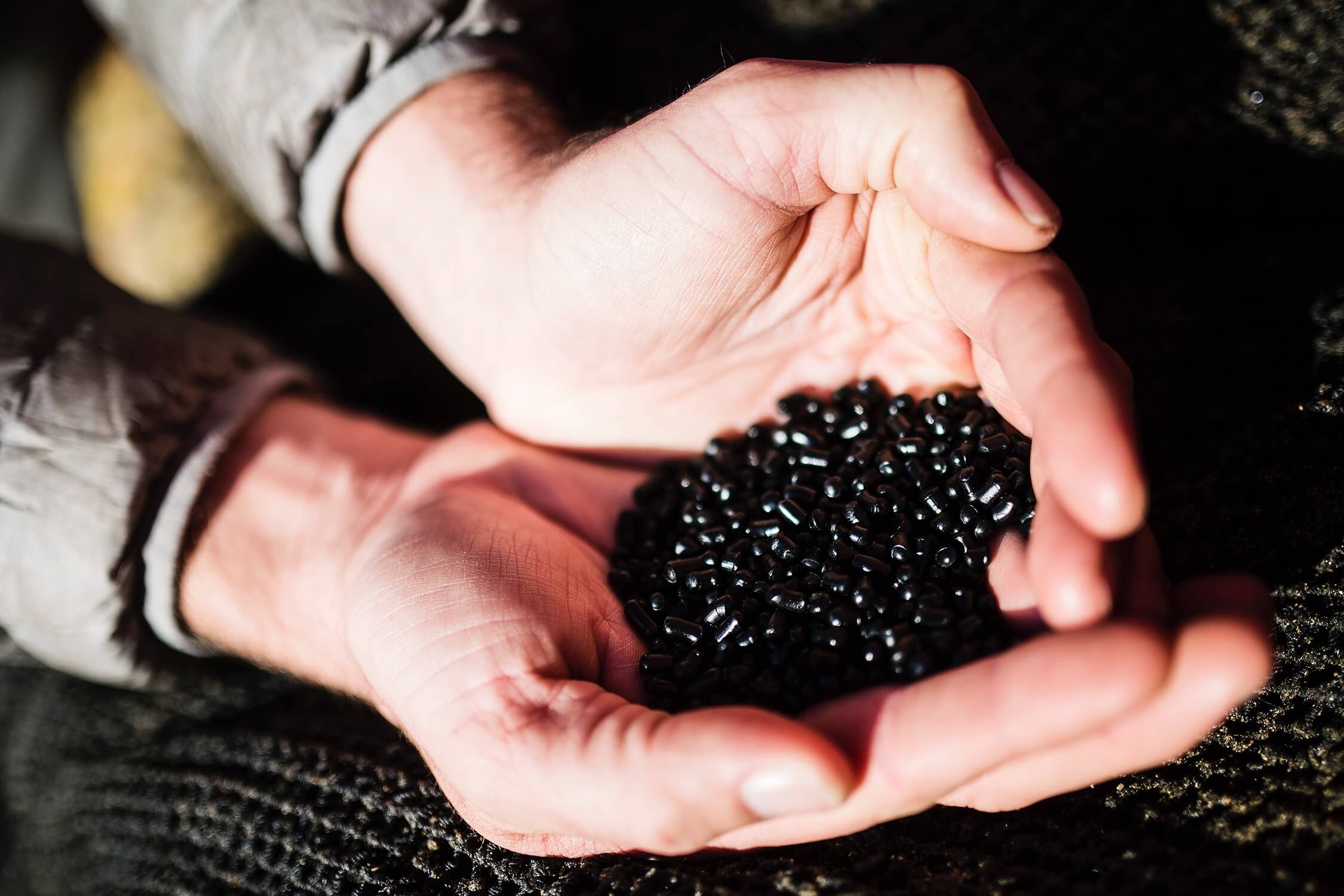 The fishing nets are first processed into plastic pellets that are ready for injection moulding.

Ben Kneppers, one of Bureo’s three co-founders, says it pays artisanal fishermen per kilogram for their old nets. Commercial fishing operations, which historically, in best-case scenarios, would dump their nets into a landfill for a fee, now donate them to the company. (In addition to diverting this waste, Bureo has also launched an environmental certification program in the artisanal fishing communities.) “Before we started, there was no way for Chilean fishermen to ethically dispose of used nets,” says Kneppers.

While Bureo began by designing smaller items, such as sunglasses, skateboards and surfboard fins, it has since struck up partnerships to broaden the use of its nets, including with Patagonia and Humanscale. Bureo’s first initiative with the latter company started in the summer of 2016, when they collaborated on a recycled nylon that would be strong enough to use in chair components. That partnership led to the 2018 launch of Smart Ocean, the world’s first task chair made of recovered ghost nets. Each of the chairs incorporates almost one kilogram of fishing nets that have gone through a sorting and cleaning process before being converted into plastic pellets ready for injection moulding. 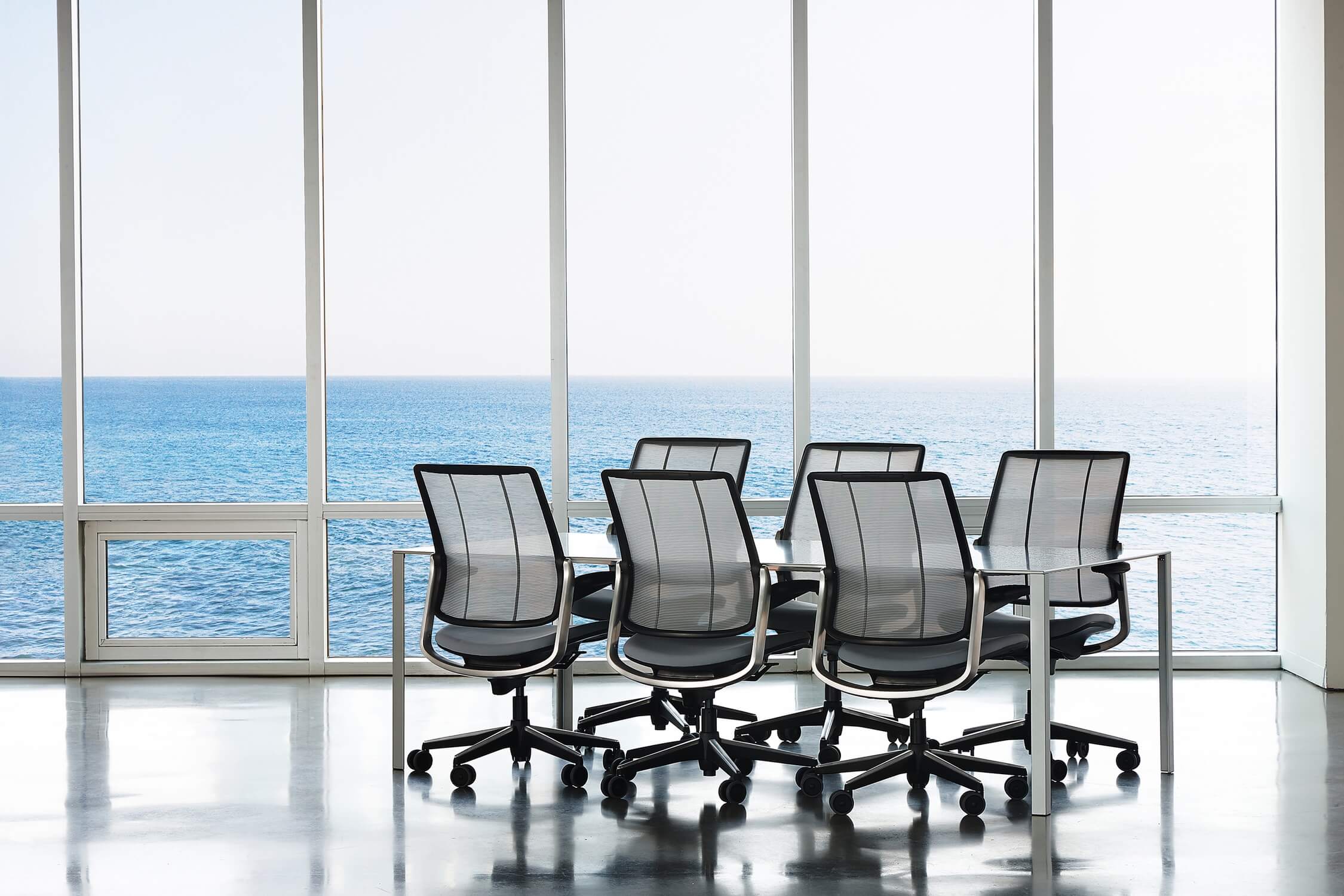 By the end of 2019, Bureo had collected nearly 590,000 kilograms of end-of-life nets that would otherwise be discarded in the Pacific and Atlantic Oceans, some 13,600 kilograms of them going into Smart Ocean, with more nets earmarked for other Humanscale products currently in development.

And that hasn’t been the only industry initiative. Last spring, Spanish outdoor-furniture brand Vondom declared that the pieces in its Ibiza line would be composed of plastics salvaged from the island’s beaches. Eugeni Quitllet, the collection’sdesigner, is a native of Ibiza. “Observing the plastic objects brought by the sea,” he said at the time, “inspired me to create a unique collection made of recycled plastics from the island.” 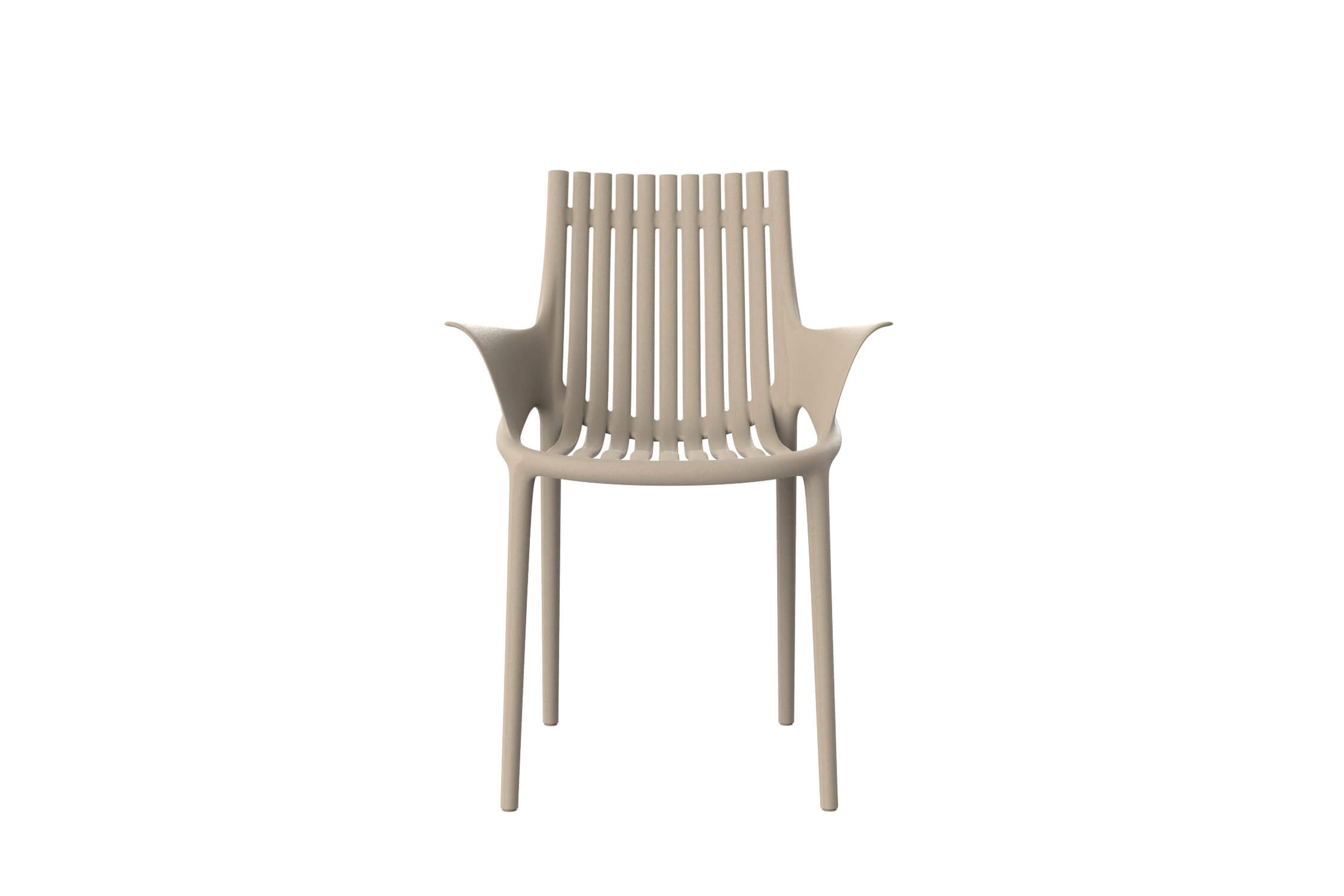 Plastics derived from fishing nets discarded in the Mediterranean are at the heart of Vondom’s Ibiza line of outdoor furnishings.

In the view of Belgian curator Jan Boelen, however, the industry will have to do more than simply recycle to tackle the plastic problem. “I’m not against plastic; without it, there are certain medical procedures that wouldn’t be possible,” says Boelen, who is the head of the masters program in social design at Design Academy Eindhoven in the Netherlands. “It’s a good material that lasts for a long time, but we’re not designing things to last.”

Plastic is a good material that lasts for a long time, but we’re not designing things to last.
Jan Boelen, design critic

Of course, Italy-based Kartell — whose raison d’être hinges on plastic — has long aimed to do just that, creating pieces intended as collector items that grow in value over the years. But it has also been experimenting with alternatives to the material. Last year, Kartell began producing its iconic Componibili storage units out of a biopolymer derived from agricultural waste. Through a biological process, the waste material, sourced largely from fruit, potatoes and sugar beets, “is ‘attacked’ by micro-organisms that generate a biomass similar to plastic,” Kartell’s Lorenza Luti says. “After a series of processes to refine the composition, this biomass becomes a material of the highest quality.” 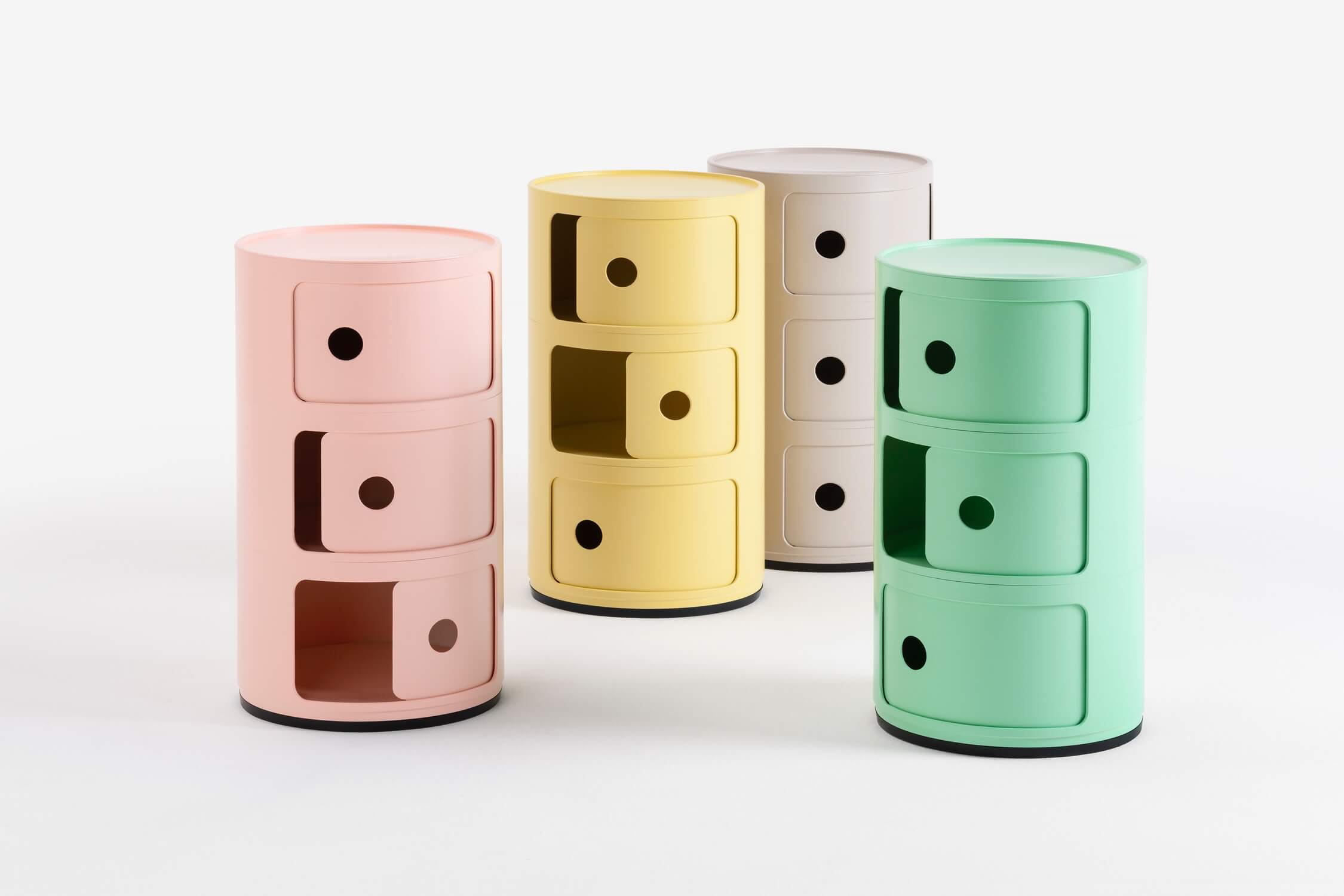 Kartell recently relaunched its iconic Componibili storage units to include a version made with a biopolymer created from agricultural waste.

Its promise has been galvanizing for the company, inspiring Kartell’s R&D division to explore its use in other products. In the meantime, Philippe Starck’s A.I. collection for the brand is being made of 100 per cent reconstituted, heat-moulded plastic, while the designer’s Smart Wood line adopts wood as the starting point for a new technology that makes the natural material uncommonly pliable.

Despite all these efforts, Jane Abernethy, the Chief Sustainability Officer at Humanscale, acknowledges that the industry still has a long way to go. She feels, though, that the initiatives being adopted by her brand as well as others are a promising first step, even though the development of Smart Ocean, for instance, took longer than expected. “With the Smart Ocean chair, we’re using design to solve a problem and we’re showing that it’s possible to make the world a better place by making a longer-lasting product from waste,” she says. “It’s no longer a trade-off or about making something that is less bad. It’s about making a positive difference.”

From bio-based alternatives to creative recycling, how designers and manufacturers worldwide are rethinking a problematic material.